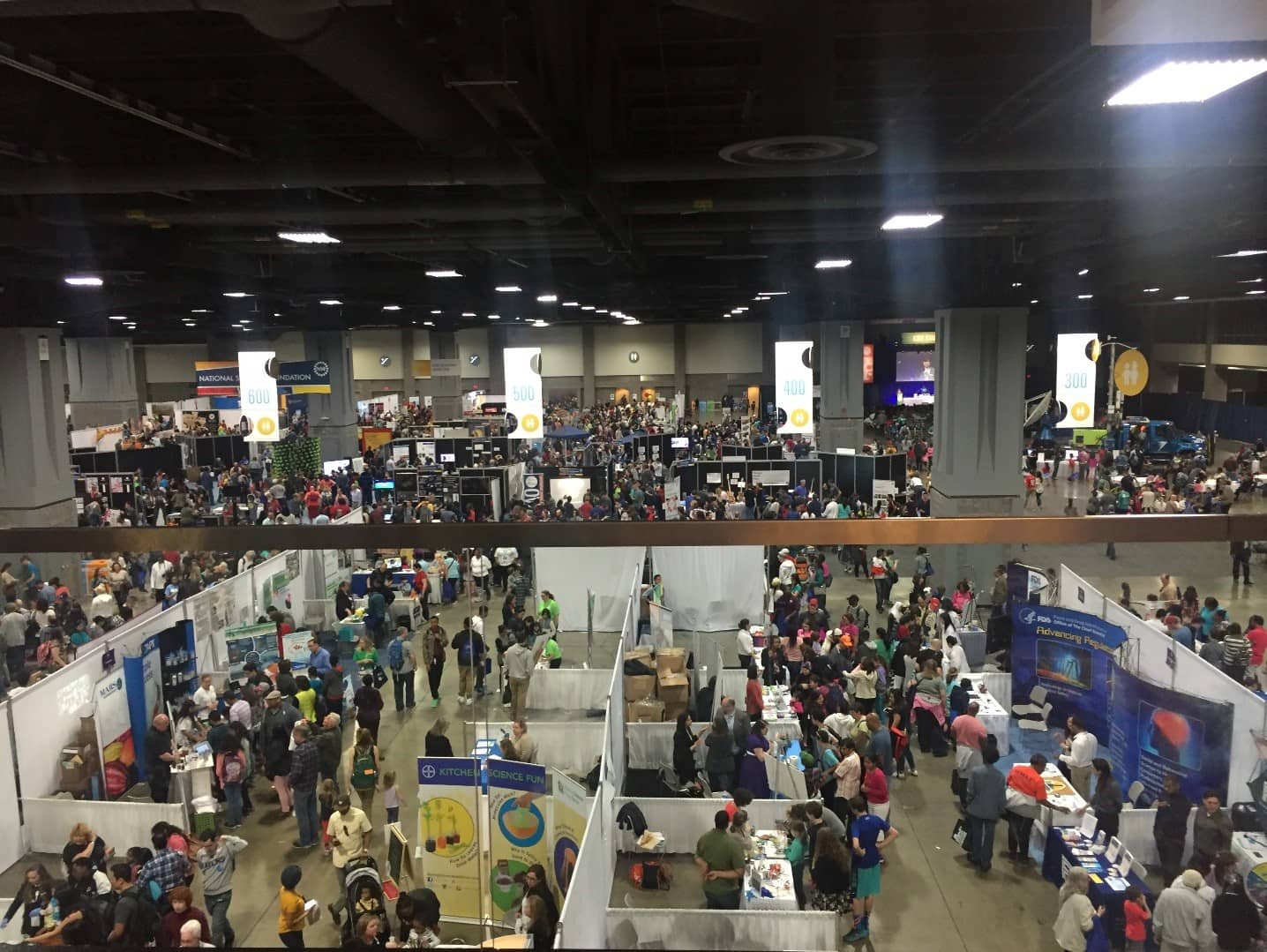 On April 16-17, 2016, the 4th USA Science & Engineering Festival was held in Washington, DC. This national event is the largest science festival in the country, with over 3000 exhibitors, a speaker program, and hundreds of hands-on activities for attendees to participate in. Free admission helps the festival to draw an annual attendance of over 350,000 visitors, which range from school groups and educators—to curious adults (and at least one tech-obsessed curator). Much like The Henry Ford’s own Maker Faire Detroit, the exhibits buzzed with possibility and discovery for all things technological and experimental. The enthusiasm in the exhibit halls was contagious among young and adult audiences alike, as mixture of independent startups, educational collectives, government organizations, and commercial investors collided under one roof, under one common goal: to engage young audiences by providing formative and positive interactions with the STEM fields—and to suggest the future possibilities of the weight of technology within our everyday lives. Here are a few favorite moments from the festival. 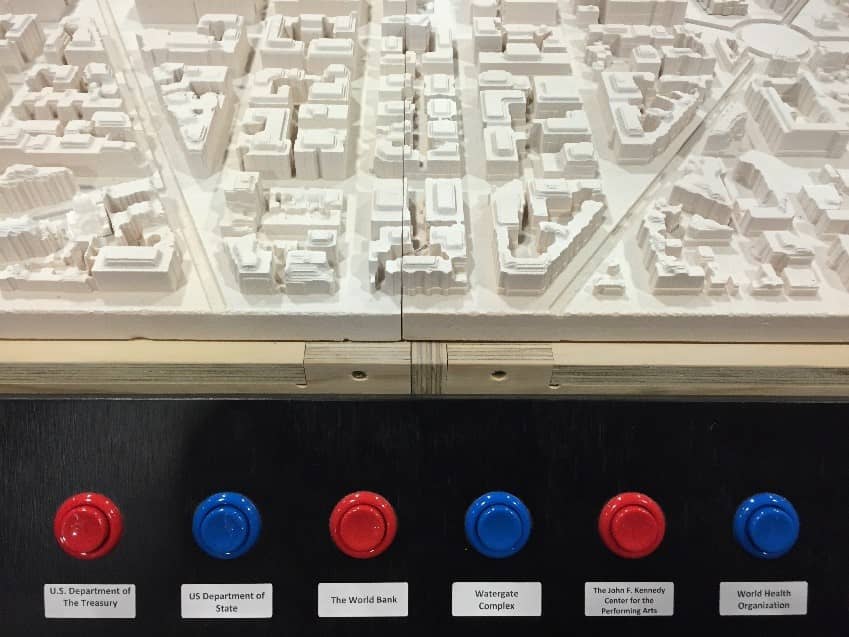 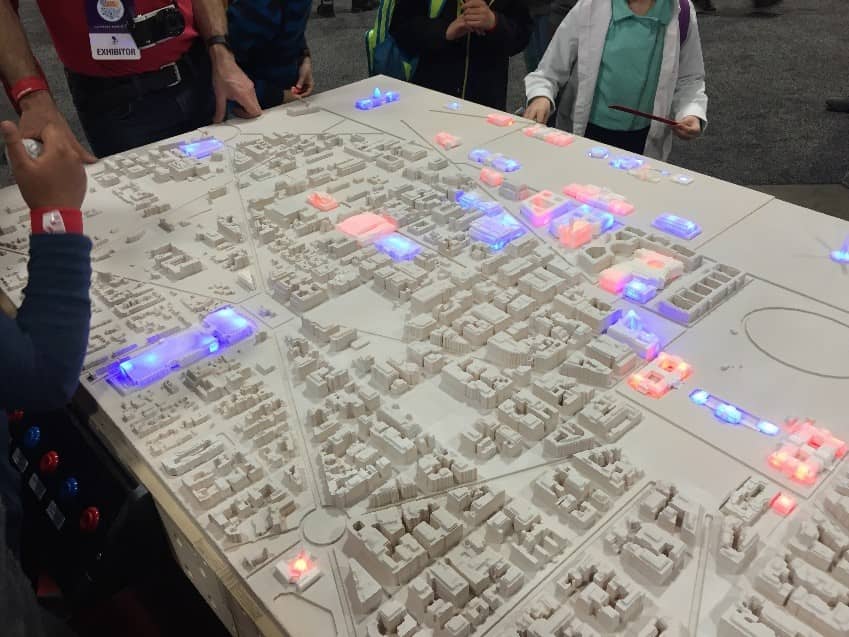 SketchUp, a computer program for 3D modeling, showed a multi-dimensional range of abilities with projects that fell into the entertainment-based arena (a DIY foosball table or mechanical dinosaur)—to more educational applications such as an interactive, light-up plan of Washington, DC. Thanks to SketchUp’s open source model, with access to a 3D printer, you could theoretically create your own model of the city of Detroit or even of The Henry Ford museum by using ready-made SketchUp plans, available for free online. As SketchUp’s demonstrators noted, once the models are printed and a simple LED-light structure is put into place, these models “can be great for learning about an existing area of the world, re-imagining one, or coming up with your own world altogether.” 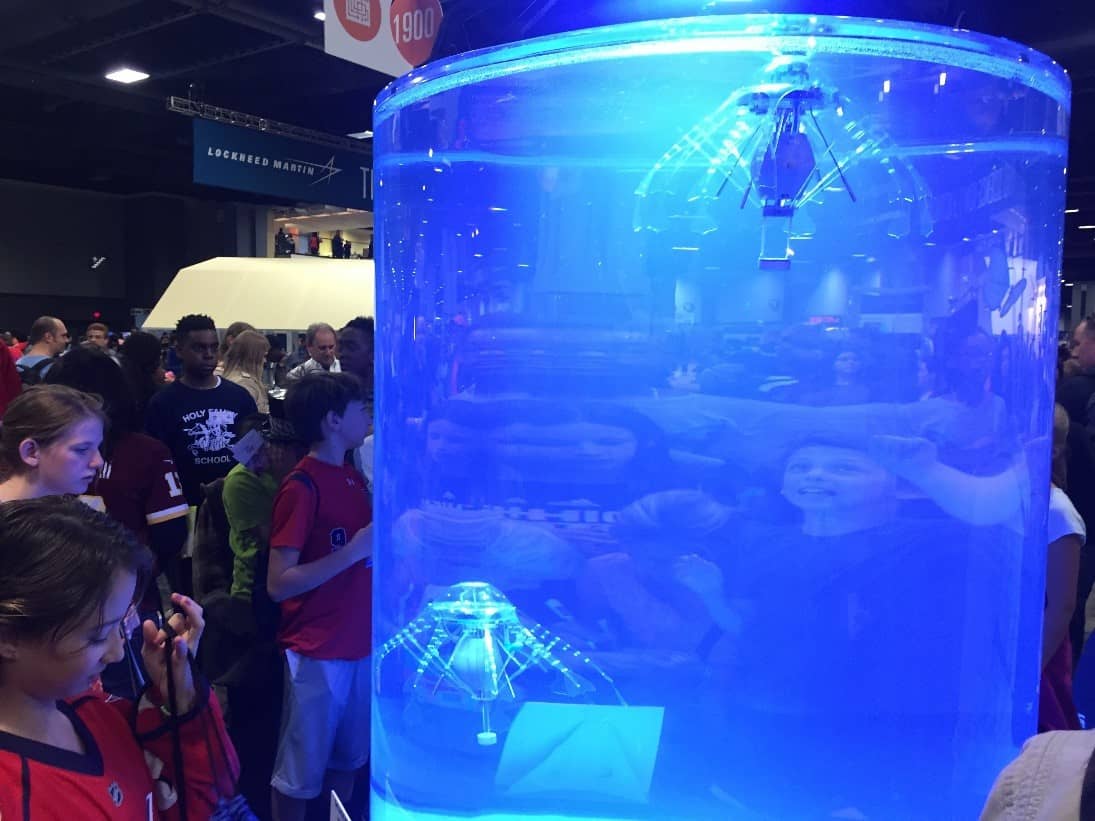 The robotics company, Festo, was onsite to demonstrate examples of their beautiful and uncanny biomimetic designs. A tank full of their AquaJelly devices perfectly mimed the swarming behavior of real-world jellyfish. Similarly, the company has created autonomous “AirPenguins,” butterflies, and bionical ants that “collaborate” through machine-based learning processes. While the visual presence of swimming robotic jellyfish is hypnotic to be sure, the company’s goals go much deeper than pure flash and fodder. Festo’s mission is to improve modern manufacturing by recreating the patterns of collaboration, control, and innovation already found within the wonders and orders of nature. 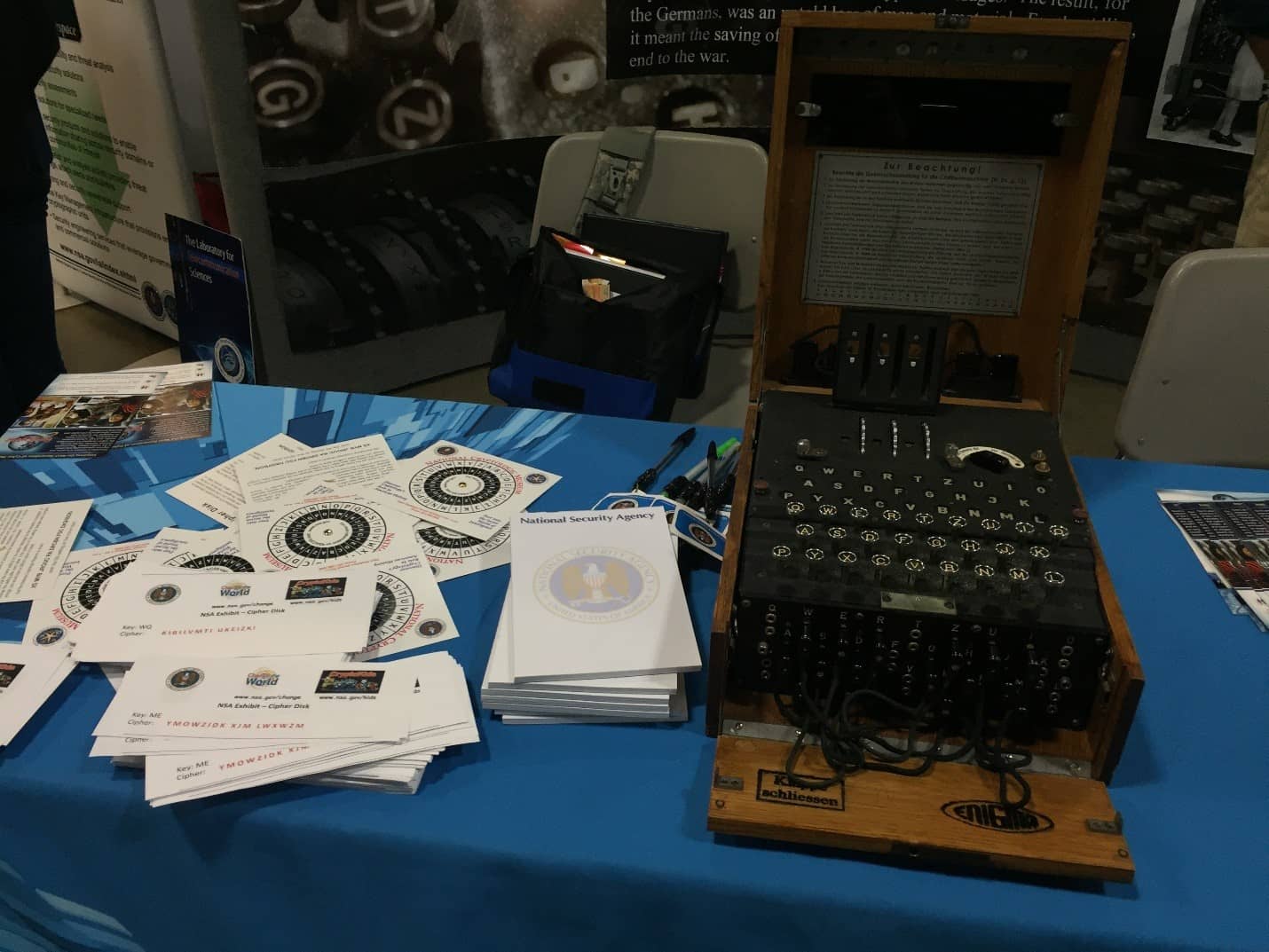 The National Security Agency and National Cryptologic Museum were also present. A hands-on display allowed guests to press keys on a working Enigma machine, well-known for its role in WWII-era communication. Machines like this were famously used by the German military to encrypt messages, while the secretive work happening at Bletchley Park in England was working to crack the Enigma’s codes. Activities at the NSA’s booth introduced young audiences to the historical world of cryptology and codebreaking via cipher disks, but also demonstrated how the same concepts could be used in contemporary cybersecurity. The Agency not only showed youth how to create a strong password, but also provided “cybersmart” awareness training in the privacy and use of social media. 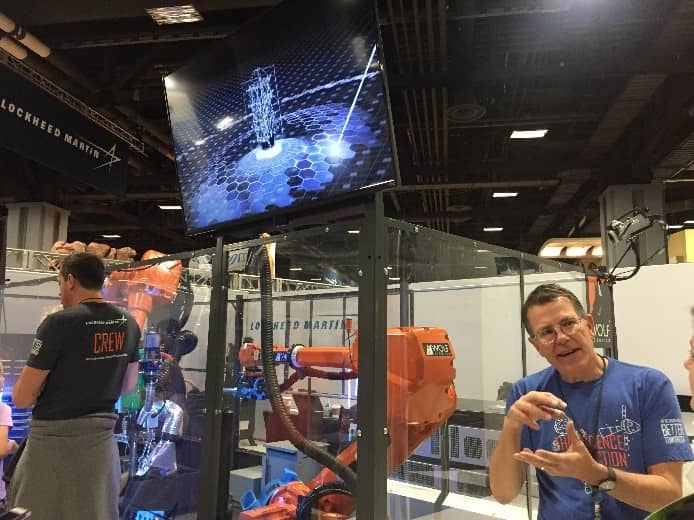 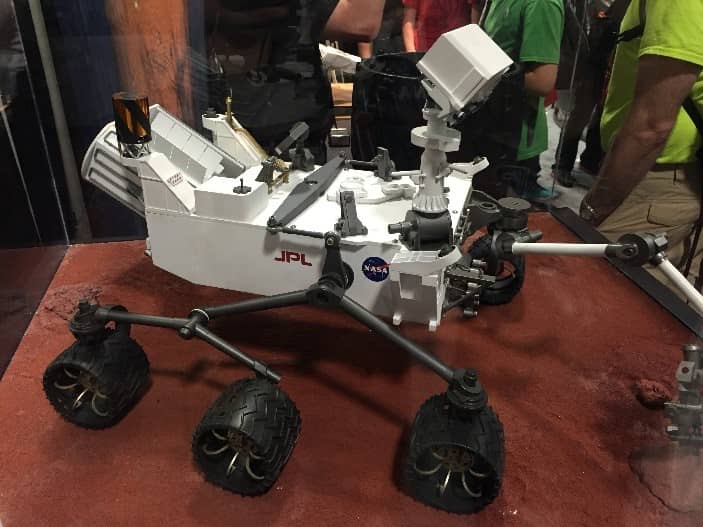 Several large pavilions encouraging careers in space science and education formed an undeniably strong presence at the festival. NASA, Lockheed-Martin, and a few others created welcoming zones jam-packed with hands-on activities. At the NASA exhibit, younger audiences could rub shoulders with working NASA scientists, see models of Mars rovers, learn about modern-day space exploration, and a glimpse into the scientific principles behind it all. Lockheed-Martin’s pavilion was taken over with a speculative display of Mars-related technology—although, as the banners posted throughout the experience cleverly reminded visitors: “This Science Isn’t Fiction.”  As I stared, admittedly mystified, at the impressively fast and fluid industrial 3D printer in front of me (that seemed a bit like it had jumped straight out of a sci-fi movie about sentient technology), a Lockheed-Martin expert patiently explained the process unfolding before us. While the MRAC (Multi-Robotic Additive Cluster), was set up to print with plastic at the festival, this machine is primarily used to print flight-ready parts for satellites with titanium, aluminum, and Inconel. It can produce rapid-fire prototypes, but also polished parts, cutting the time to, for example, create a satellite fuel tank from 18 months—down to 2 weeks. Lockheed-Martin has worked closely with NASA on every mission flown to Mars, pooling knowledge and manufacturing resources on aspects of orbiters, landers, and rovers. As the expert on hand explained, “we have to collaborate—no one can do everything, all by themselves.” 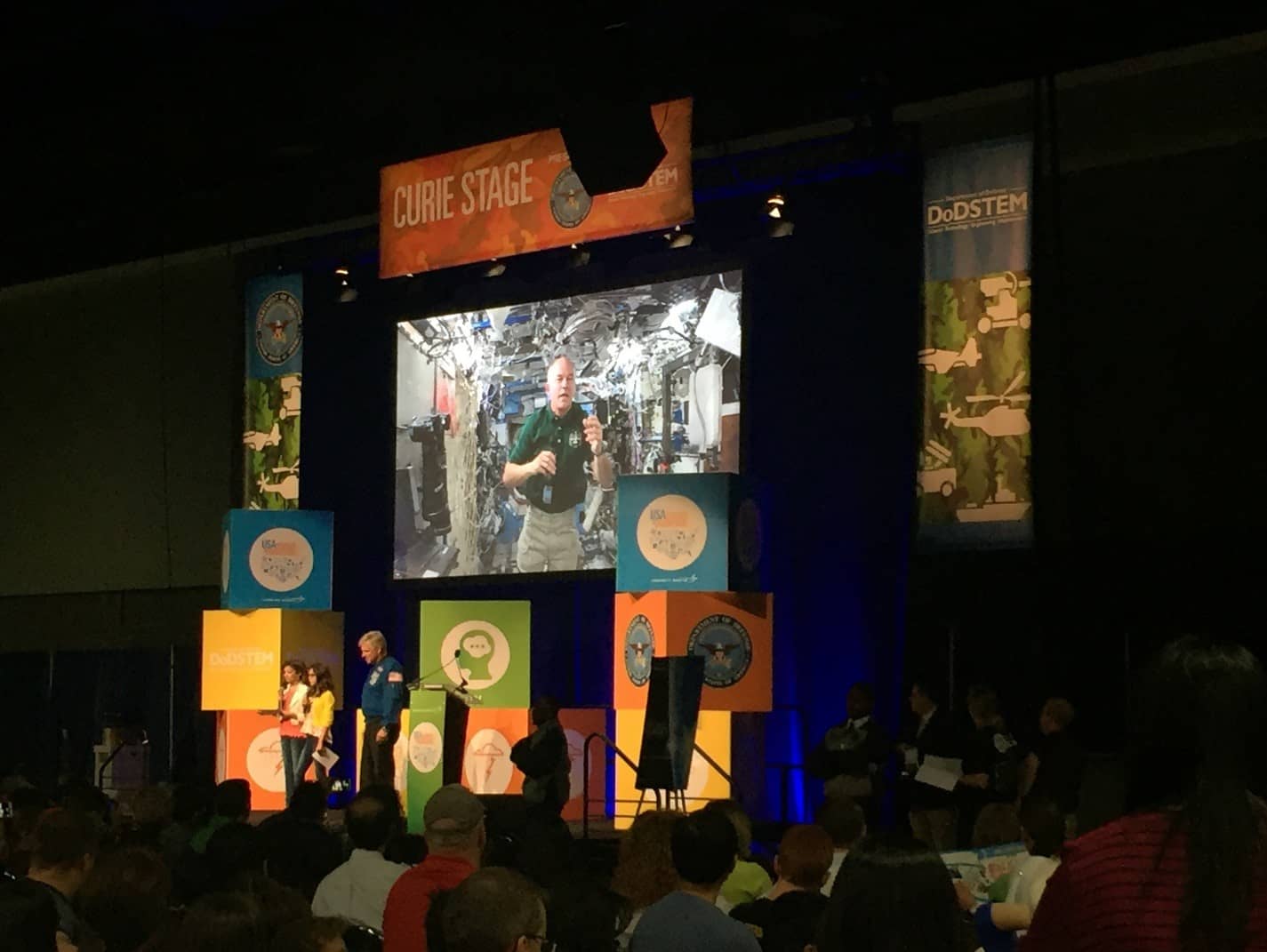 As part of the Saturday speaker series, NASA astronaut Jeff Williams was livestreamed from the International Space Station onto the festival’s stage. Young audience members were given the opportunity to ask him questions like “What does it smell like in space?” and “What happens to your body when you live in space?” Life in space is something that Williams knows well, having spent 534 cumulative days in space. And as it turns out, Williams, space travel, and the modern media age are old friends—in 2009, he formed part of the first NASA team to hold a live Twitter event in space. 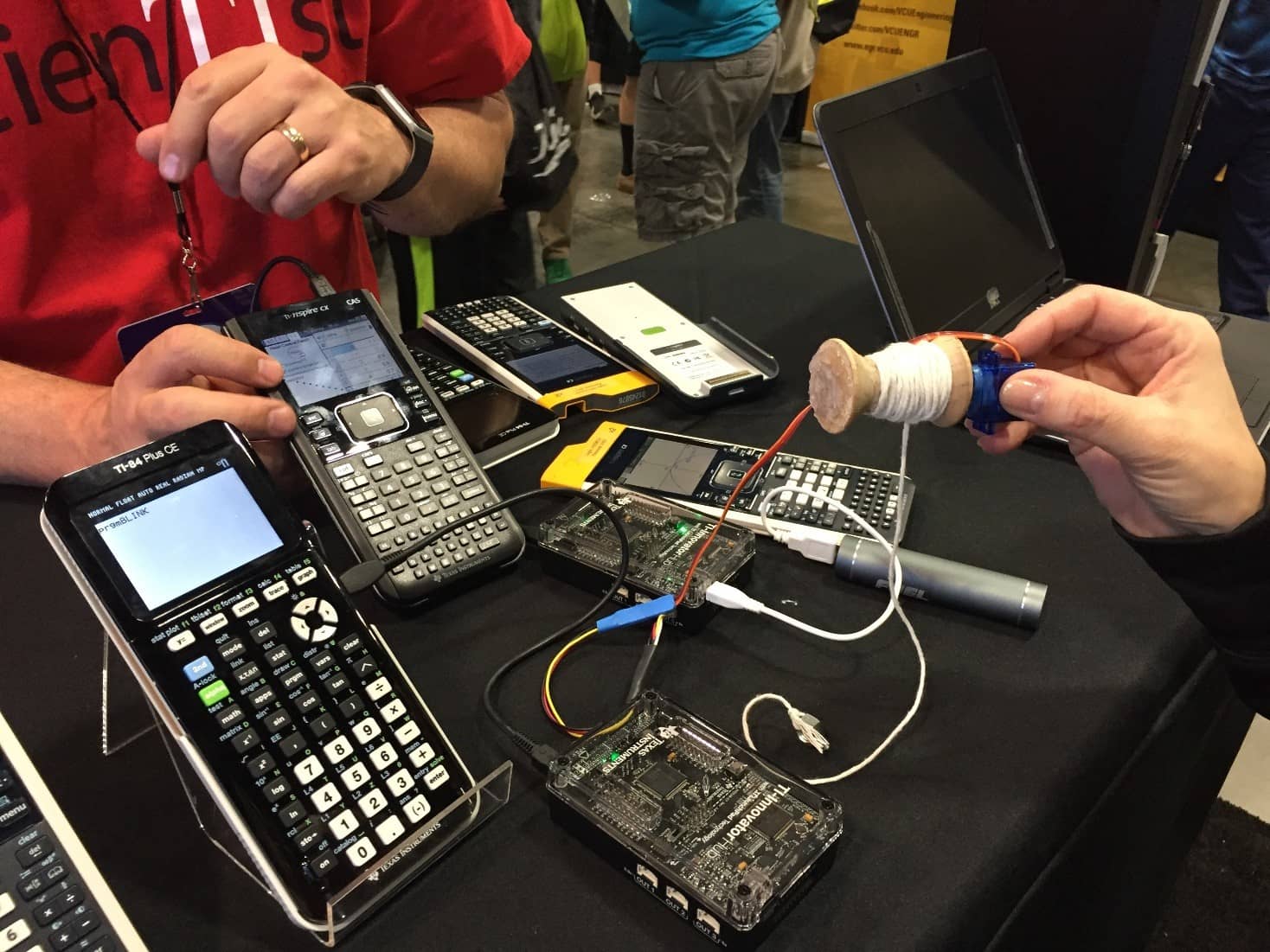 Giants of calculator history, Texas Instruments, demonstrated a new line of STEM-friendly educational calculators. Their new TI-Innovator System allows students to learn the basics of computer coding (in BASIC language, no less) on their calculators, building skills bit-by-bit in a series of “10 Minutes of Code” lesson plans. Sympathetic to the idea that STEM concepts are best enacted in some kind of physical reality, beyond the calculator’s screen, the company has created the TI-Innovator Hub (the clear box depicted lower center). The Hub, linked up to a calculator, can activate a variety of functions: LED lights, speakers, optical sensors, and ports that allow it to communicate with external breadboards, computers, and other controllers. In this image, the Hub has been programmed to raise and lower a spool of string, meant to mimic the mathematical problem of how low to lower a fishing boat anchor.