Refrigerated rail transport revolutionized meatpacking and other agricultural industries by broadening the markets for fresh produce. Refrigerator cars enabled farmers in regions with extended growing seasons, such as Florida and California, to market perishable foods across the country--greatly expanding agricultural production and allowing people in cold climates to enjoy fresh fruits and vegetables year-round.

Serious experimentation with ice-cooled refrigerated railroad car design began in the 1860s. At first, refrigerator cars primarily shipped meat from Chicago to cities in the eastern United States. But by the late 1890s, refrigerated shipping of all kinds of perishable foods by railroad had become big business. When this refrigerator car was built in 1924, there were 150,000 such cars in use. 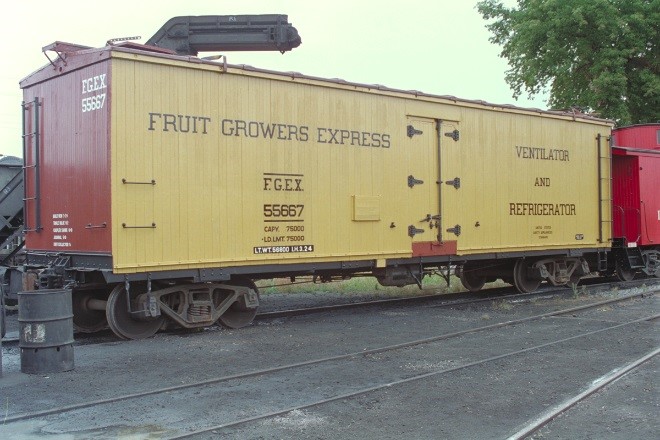 Fruit Growers Express Company, a pioneer in refrigerator car service, operated this car from 1924 until 1971. THF68309

This car was built and operated by Fruit Growers Express Company of Alexandria, Virginia, a pioneer in refrigerator car service. To cool the car, laborers loaded blocks of ice through roof hatches at each end into two large bunkers. Fans driven by the car’s axles helped to circulate the cool air. Mats of felted flax or cattle hair lined the floor and walls of the car to insulate delicate cargo against both hot and cold temperature extremes.

Ice melted quickly in refrigerator cars, despite their clever design. Fruit Growers Express and other refrigerator car companies maintained a nationwide network of ice-making and ice-loading facilities to support their business. They carefully coordinated transportation schedules and labor, because to prevent spoiled cargo, trains had to reach icing stations on time and workers had to be available to move food to market quickly once it reached its destination. Special trains made up entirely of refrigerator cars were sometimes given right-of-way priority over other traffic. 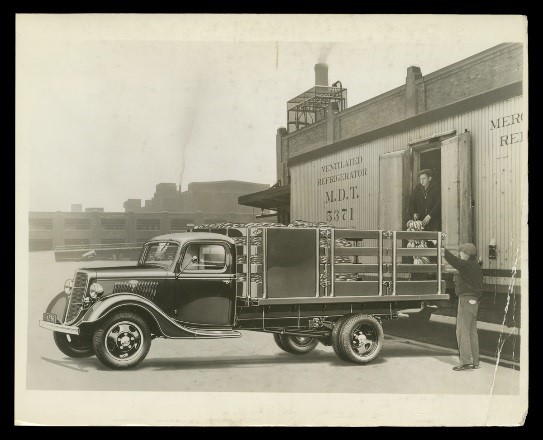 Mechanically cooled refrigerator trucks began to replace rail transport for perishable goods after World War II, but The Henry Ford’s refrigerator car had a lengthy career. Following a rebuild in 1948, it remained in service until 1971. Today, in Henry Ford Museum of American Innovation, it serves as an example of a railway innovation that revolutionized American agriculture.