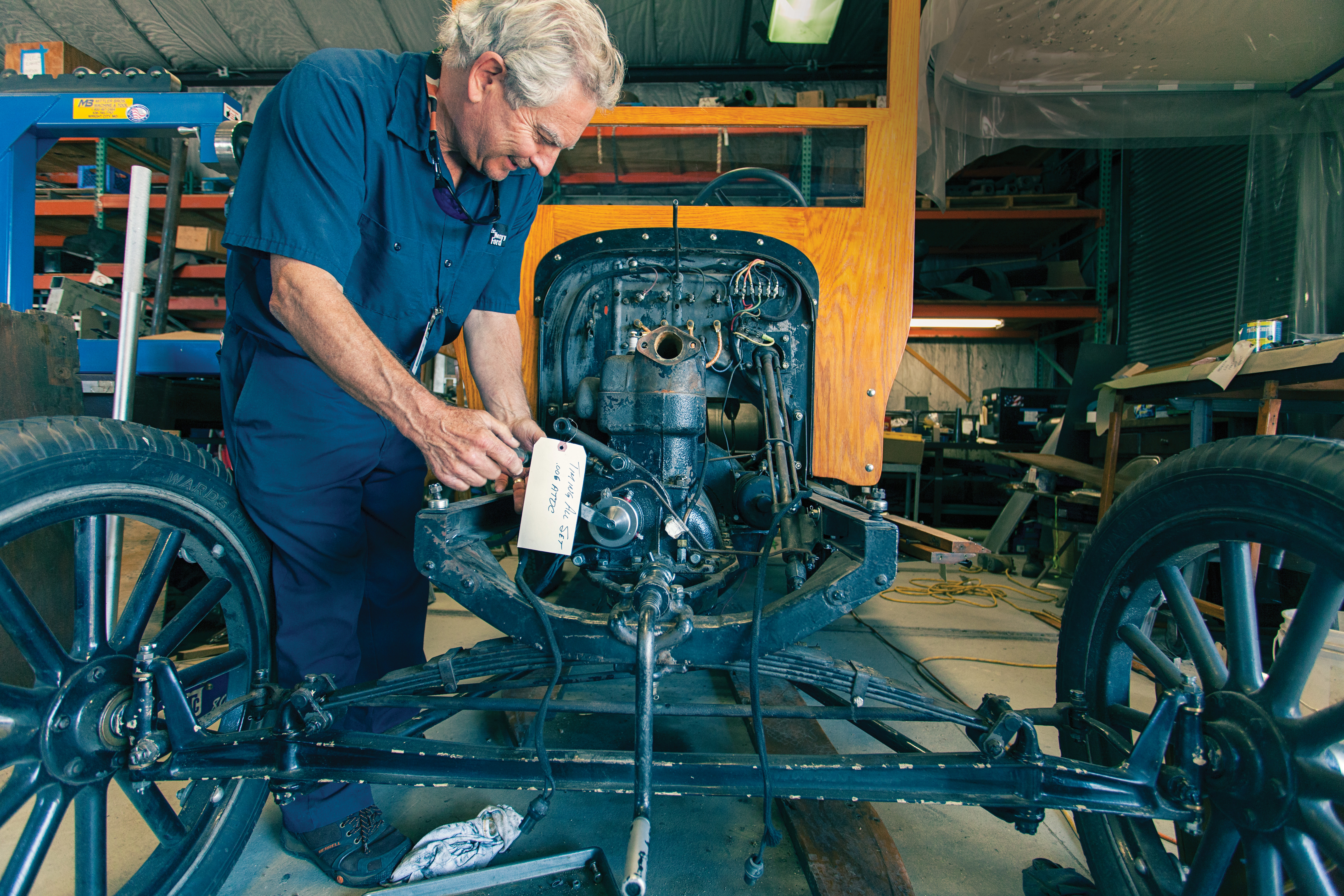 Model T mechanics are restoration artists in their own right.

The Henry Ford has a fleet of 14 Ford Model T’s, 12 of which ride thousands of visitors along the streets of Greenfield Village every year.

With each ride, a door slams, shoes skid across the floorboards, seats are bounced on, gears are shifted, tires meet road, pedals are pushed, handles are pulled and so on. Makes maintaining the cars and preserving the visitor experience a continuous challenge.

“These cars get very harsh use,” said Ken Kennedy, antique vehicle mechanic and T Shed specialist at The Henry Ford. “Between 150,000 and 180,000 people a year ride in them. Each car gives a ride every five to seven minutes, with the longest route just short of a mile. This happens for nine months a year.”

The T Shed is the 3,600-square-foot garage on the grounds of Greenfield Village where repairs, restoration and maintenance magic happen. Kennedy, who holds a degree in restoration from McPherson College in Kansas, leads the shed’s team of staff and volunteers — many car-restoration hobbyists just like him.

“I basically turned my hobby into a career,” quipped Kennedy, who began restoring cars long before college. His first project: a 1926 two-door Model T sedan. “I also have a 1916 Touring and a 1927 Willys-Knight. And I’m working on a Model TT truck,” he added.

April through December, the shed is humming, doing routine maintenance and repairs on the Model T’s as well as a few Model AA trucks that round out Greenfield Village’s working fleet. “What the public does to these cars would make any hobbyist pull their hair out. Doors opening and shutting with each ride. Kids sliding across the seats wearing on the upholstery,” said Kennedy. Vehicles often go through a set of tires every year. Most hobbyist-owned Model T’s have the same set for three-plus decades.

With the heavy toll taken on the vehicles, the T Shed’s staff often makes small, yet important, mechanical changes to the cars to ensure they can keep up. “We have some subtle things we can do to make them work better for our purpose,” said Kennedy. Gear ratios, for example, are adjusted since the cars run slow — the speed limit in Greenfield Village is 15 miles per hour, maximum. “The cars look right for the period, but these are the things we can do to make our lives easier.”

In the off-season, when Greenfield Village is closed, the T Shedders shift toward more heavy mechanical work, replacing upholstery tops and fenders, and tearing down and rebuilding engines. While Kennedy may downplay the restoration, even the conservation, underpinnings of the work happening in the shed, the mindset and philosophy are certainly ever present.

“Most of the time we’re not really restoring, but you still have to keep in mind authenticity and what should be,” he said. “It’s not just about what will work. You have to keep the correctness. We can do some things that aren’t seen, where you can adjust. But where it’s visible, we have to maintain what’s period correct. We want to keep the engines sounding right, looking right.” 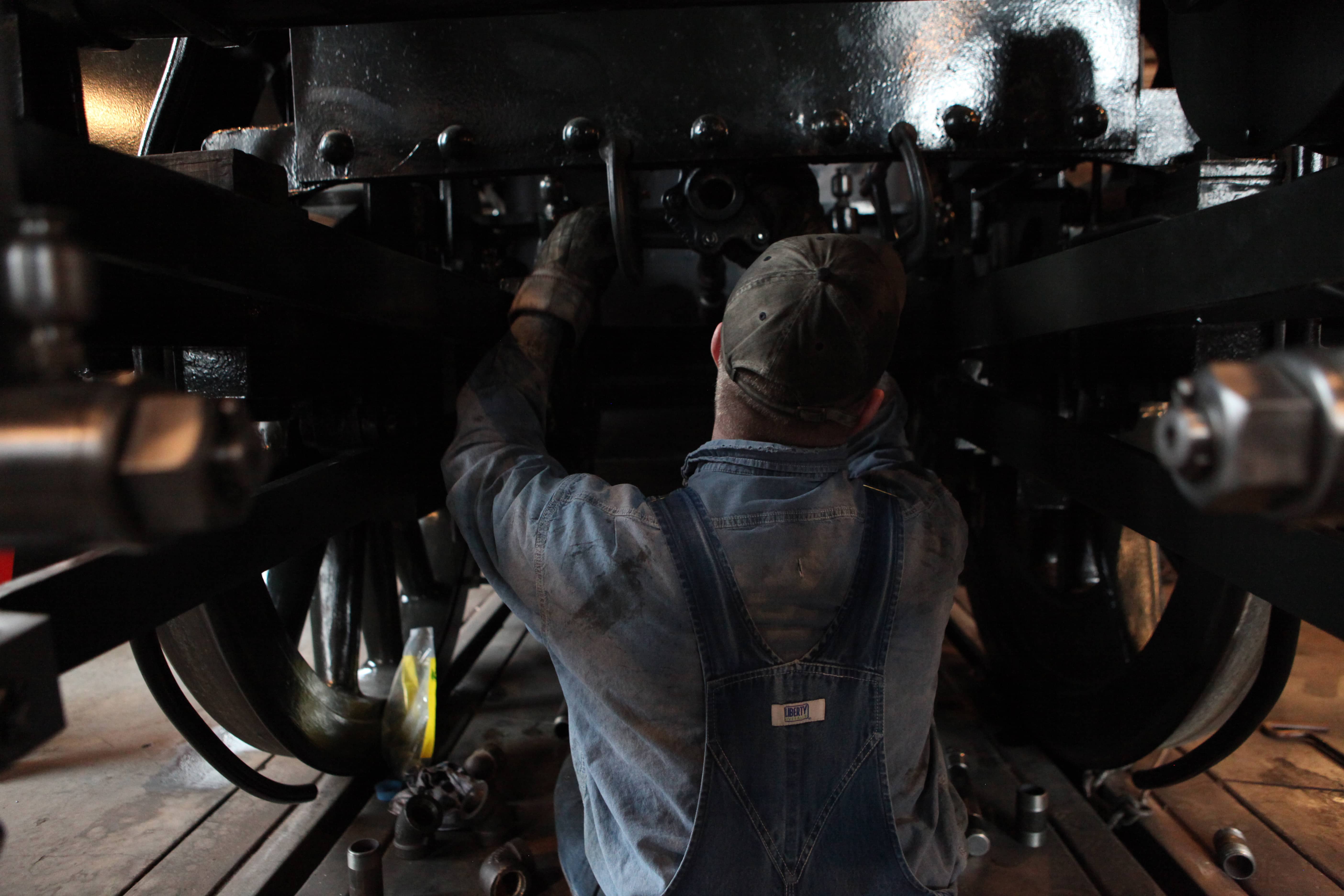 RESTORATION IN THE ROUND
Tom Fisher, Greenfield Village’s chief mechanical officer, has been restoring and maintaining The Henry Ford’s steam locomotives since 1988. “It was a temporary fill-in; I thought I’d try it,” Fisher said of joining The Henry Ford team 28 years ago while earning an engineering degree.

He now oversees a staff with similarly circuitous routes — some with degrees in history, some in engineering, some with no degree at all. Most can both engineer a steam-engine train and repair one on-site in Greenfield Village’s roundhouse.

“As a group, we’re very well rounded,” said Fisher. “One of the guys is a genius with gas engines — our switcher has a gas engine, so I was happy to get him. One guy is good with air brake systems. We feel them out, see where they’re good and then push them toward that.”

Fisher’s team’s most significant restoration effort: the Detroit & Lima Northern No. 7. Henry Ford’s personal favorite, this locomotive was formerly in Henry Ford Museum and took nearly 20 years to get back on the track.

“We had to put on our ‘way-back’ hats and say this is what we think they would have done,” said Fisher.

No. 7 is one of three steam locomotives running in Greenfield Village. As with the Model T’s, maintaining these machines is a balance between preserving historical integrity and modernizing out of necessity.

“A steam locomotive is constantly trying to destroy itself,” Fisher said. “It wears its parts all out in the open. The daily firing of the boiler induces stresses into the metal. There’s a constant renewal of parts.”

Parts that Fisher and his team painstakingly fabricate, cast and fit with their sturdy hands right at the roundhouse.

DID YOU KNOW?
The No. 7 locomotive began operation in Greenfield Village to help commemorate Henry Ford’s 150th birthday in 2013.