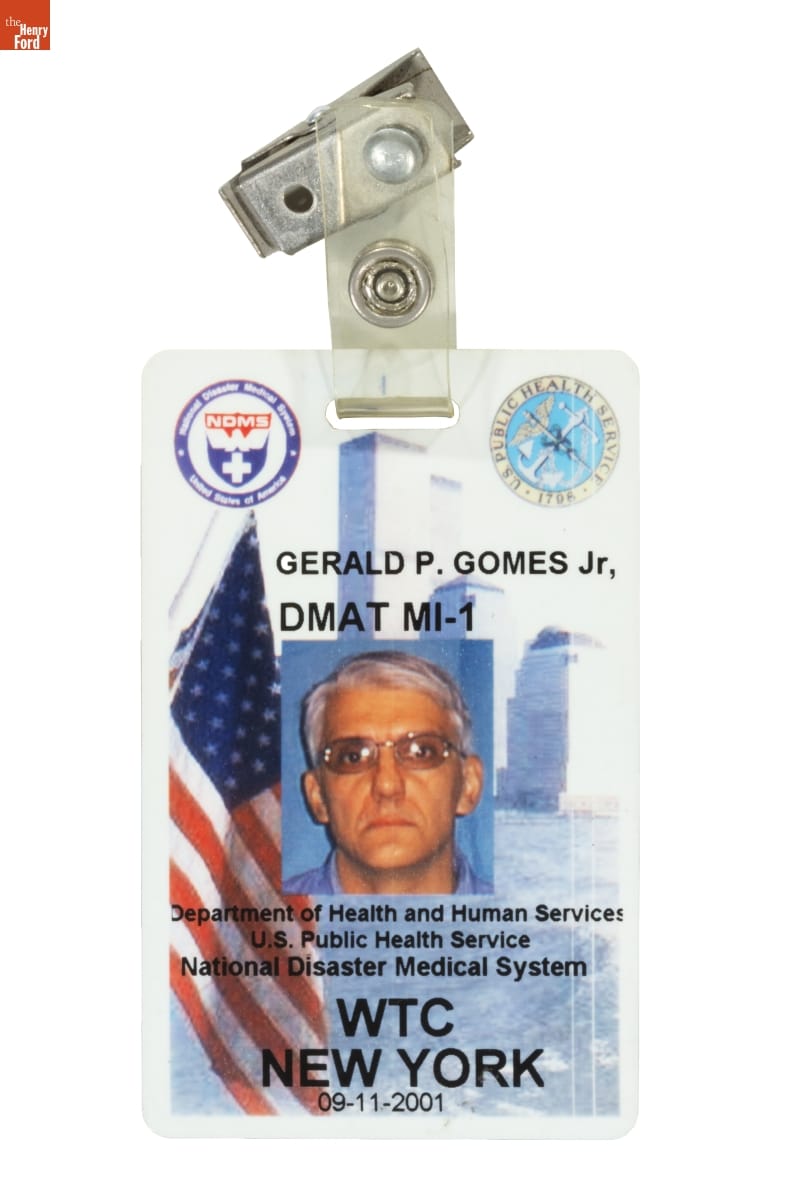 Identification badge worn by Gerry Gomes while on assignment at Ground Zero in September 2001. / THF185942

This year marks the 20th anniversary of events that have changed the course of American history: the terrorist attacks of September 11, 2001, commonly known as “9/11.” In their online FAQs, the 9/11 Memorial & Museum explains briefly what happened that day:

“9/11” is shorthand for four coordinated terrorist attacks carried out by al-Qaeda, an Islamist extremist group, that occurred on the morning of September 11, 2001.

Nineteen terrorists from al-Qaeda hijacked four commercial airplanes, deliberately crashing two of the planes into the upper floors of the North and South Towers of the World Trade Center complex and a third plane into the Pentagon in Arlington, Virginia. The Twin Towers ultimately collapsed because of the damage sustained from the impacts and the resulting fires. After learning about the other attacks, passengers on the fourth hijacked plane, Flight 93, fought back, and the plane was crashed into an empty field in western Pennsylvania about 20 minutes by air from Washington, D.C.

The attacks shocked, saddened, scared, and angered Americans. In their aftermath, the United States instituted new air safety regulations; embarked on the longest-running war in our history, in Afghanistan (from which we just exited last month); and created a new federal department, the Department of Homeland Security. It’s safe to say that most Americans who were adults in 2001 remember where they were and what they were doing when they first learned of the attacks, and most Americans have felt their effects in some way. 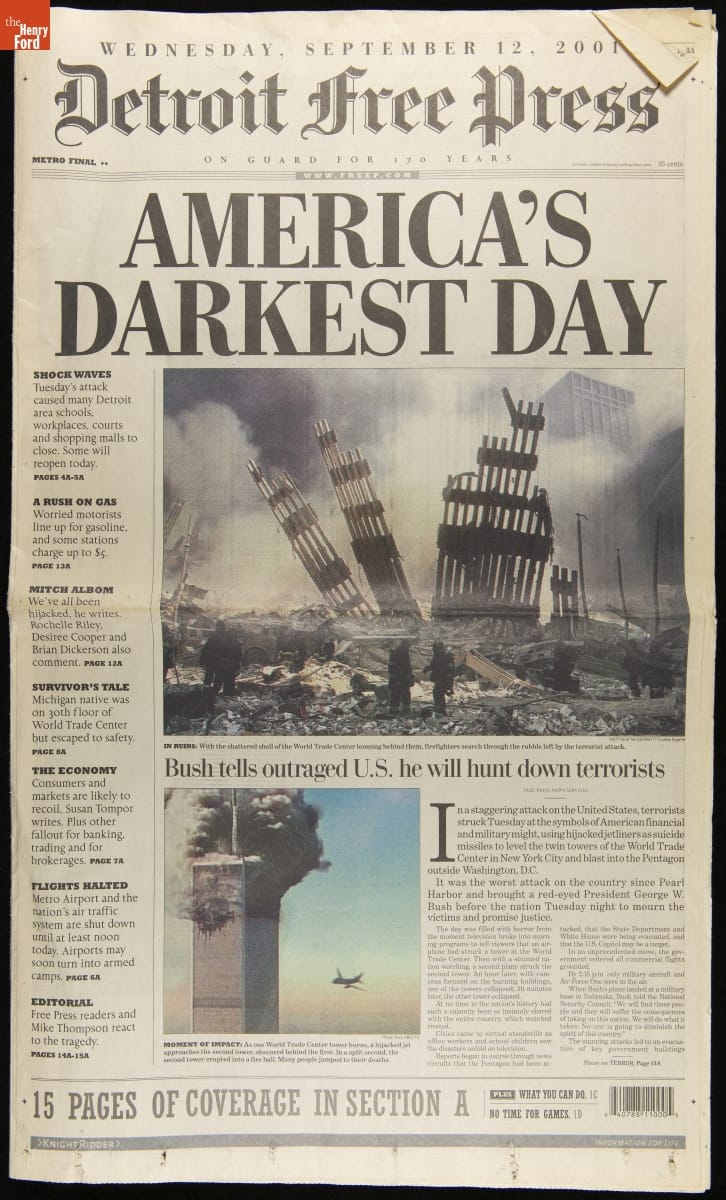 The front page of the September 12, 2001, issue of the Detroit Free Press referred to the terrorist attacks of the previous day as “America’s Darkest Day.” / THF625308

One person this is particularly true of is Gerald “Gerry” Gomes, one of The Henry Ford’s dedicated volunteers. Gerry donated a number of the artifacts seen in this post, related to his work responding to 9/11.

Around 1990, Gerry became involved with the National Disaster Medical System (NDMS), which, NDMS explains, is “a federally coordinated health care system and partnership of the Departments of Health and Human Services, Homeland Security, Defense, and Veterans Affairs.” Its mission is “to supplement our nation’s public health and medical resources…. NDMS mobilizes resources through specialized teams that provide human and veterinary healthcare, mortuary assistance, patient movement coordination, and definitive care during times of need.” Those affiliated with NDMS have regular jobs and lives, but must be packed and ready to deploy at a moment’s notice when they are called up to duty. In more than 20 years of NDMS service, Gerry assisted with many disasters (such as devastating Florida hurricanes) and key events (such as presidential inaugurations and Olympics games) at both the state and federal levels.

Within NDMS, Gerry worked on a Disaster Medical Assistance Team, or DMAT. The DMATs are made up of doctors, nurses, EMTs, firemen, paramedics, and other staff who support them. Their role is to provide medical care during public health emergencies and “National Security Special Events,” which might include presidential inaugurations, visits by significant international dignitaries, or international conferences and important gatherings. When deployed, Gerry’s team could process up to 200 casualties per hour. His role on the team was in communications—keeping the team in contact with command. He was given the role as they needed someone who had field experience and could interact effectively with people at the scene of an emergency. 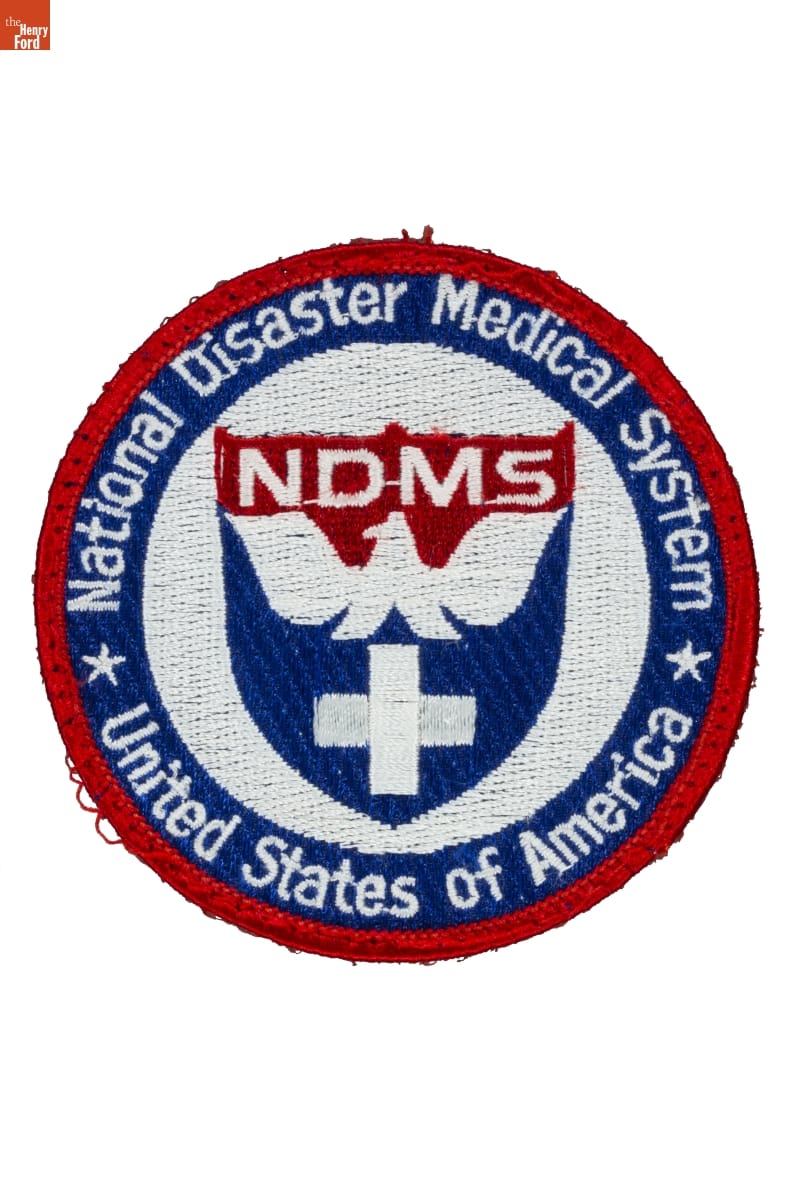 Gerry’s day-to-day job was in communications at Ford Motor Company. On September 11, 2001, his boss called and told him that planes had hit the Twin Towers of the World Trade Center, and that he thought Gerry would be activated by the NDMS. And indeed he was. It wasn’t long before Gerry was boarding an airplane at Detroit Metro airport, with military planes and helicopters flying overhead. Despite an order issued by the Federal Aviation Administration less than an hour after the first plane hit the World Trade Center that required all civilian flights then in the air to land and barred any further departures, Gerry’s flight departed under the auspices of the federal government, escorted by multiple other planes all the way to New York’s LaGuardia airport.

In the first of three missions there, Gerry’s DMAT team was deployed to the World Trade Center site, known as Ground Zero—or, to the responders who worked there after the towers collapsed, “The Pile.” Their initial mission objective was to serve as a casualty response team, triaging survivors, so they set up three field hospitals near the remains of the World Trade Center Marriott Hotel, between the Twin Towers. However, it quickly became clear that there were few survivors. The team then pivoted to providing medical care for the other responders “working The Pile.” Gerry said many of those they treated would have their shoes burned off, as the smoldering remains of the towers were still so hot. 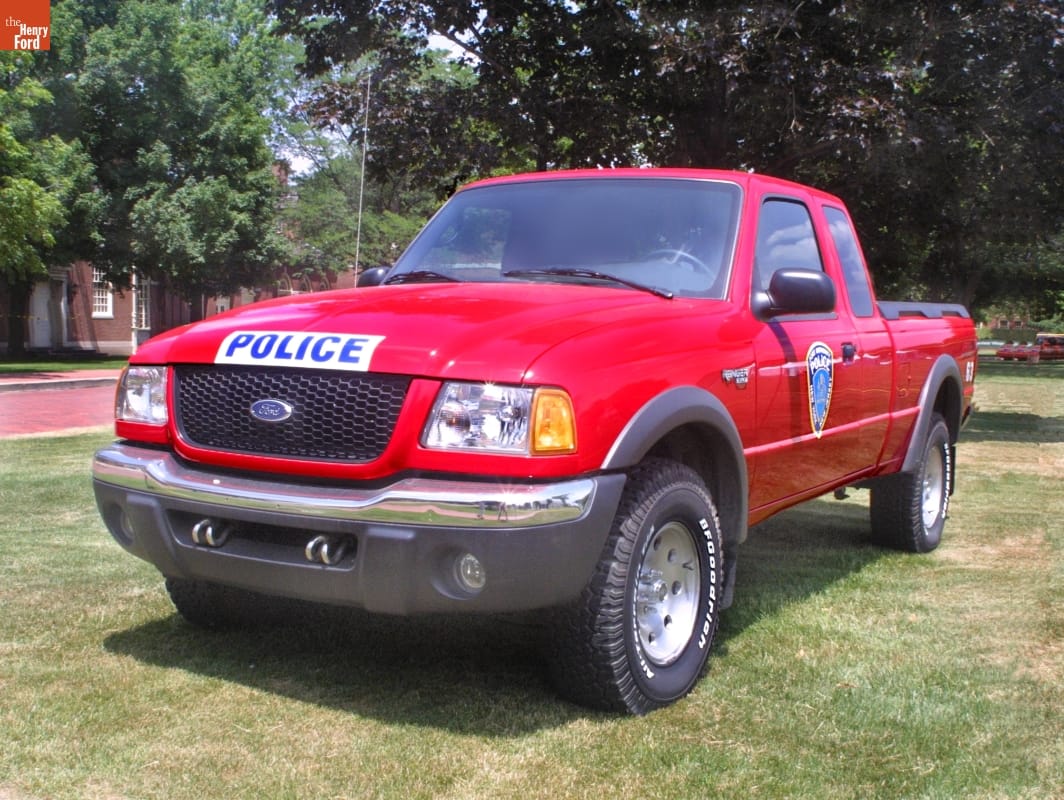 After the September 11 attacks, many individuals, organizations, and corporations were eager to provide assistance in whatever way they could to responders at Ground Zero. Because many of the New York-New Jersey Port Authority’s vehicles were destroyed during 9/11, Ford Motor Company loaned them 15 pre-production prototypes—including this one—of the Ranger FX4, a heavy-duty, 4-wheel drive truck with special off-road equipment. / THF1368

The team’s first mission lasted two weeks. After that, they had a four-week mission recovering the remains of victims. Their third and final mission was to close down the site and make sure all the equipment was retrieved.

The work was mentally taxing. Every day, everyone who was working at The Pile had to undergo a psychological evaluation. Gerry’s team was also scheduled to work overnights—from midnight to noon—which added an additional strain. Gerry told the story of bonding with a firefighter as fellow “coffeehounds,” sharing a mutual love of coffee. Gerry later found out that firefighter had previously been stationed near Ground Zero, and that many of those he had been stationed with had been killed in the attack. The firefighter had not talked since that time—but he would talk to Gerry. He later told Gerry he had begun to realize it was not his fault he was not killed along with his colleagues that day.

When asked how he dealt with the constant emotional toll, Gerry responded, “You learn to close out the ambient. You’re there functioning in your job the best you can.” The team is not just one person, Gerry emphasized, but instead everyone working together. “That’s how we achieve more,” he added. His DMAT was made up of “A-type personalities, people at the top of their field with nothing to prove,” who worked together to get the job done despite the challenges. In fact, the team’s motto was “Semper Gumby,” indicating they were always flexible and would do what it takes.

As Gerry and so many others worked at Ground Zero, communities across the United States found ways to mourn and come together. These photographs are from the “Peace and Unity Candlelight Vigil” held in front of Henry Ford Museum on September 19, 2001. / Digital Collections

There was also worry from the families of the responders at The Pile—Gerry and his team felt very safe there, but Gerry noted that “families don’t know that.” Gerry’s son, in the U.S. Navy, would call, along with his commanding officer, to try to get information on what was going on—but Gerry was not allowed to speak about his work at the time. He could not even tell anyone where he was staying—but now can say that the team stayed at the Waldorf Astoria New York.

Though Gerry worked on a series of challenging and complicated projects for the NDMS over decades, he noted that the World Trade Center was “the most terrible time.” He also added that such work is “a thankless job and sometimes the people in the group thank you”—as Gerry’s team was honored by the Michigan Senate when they returned. 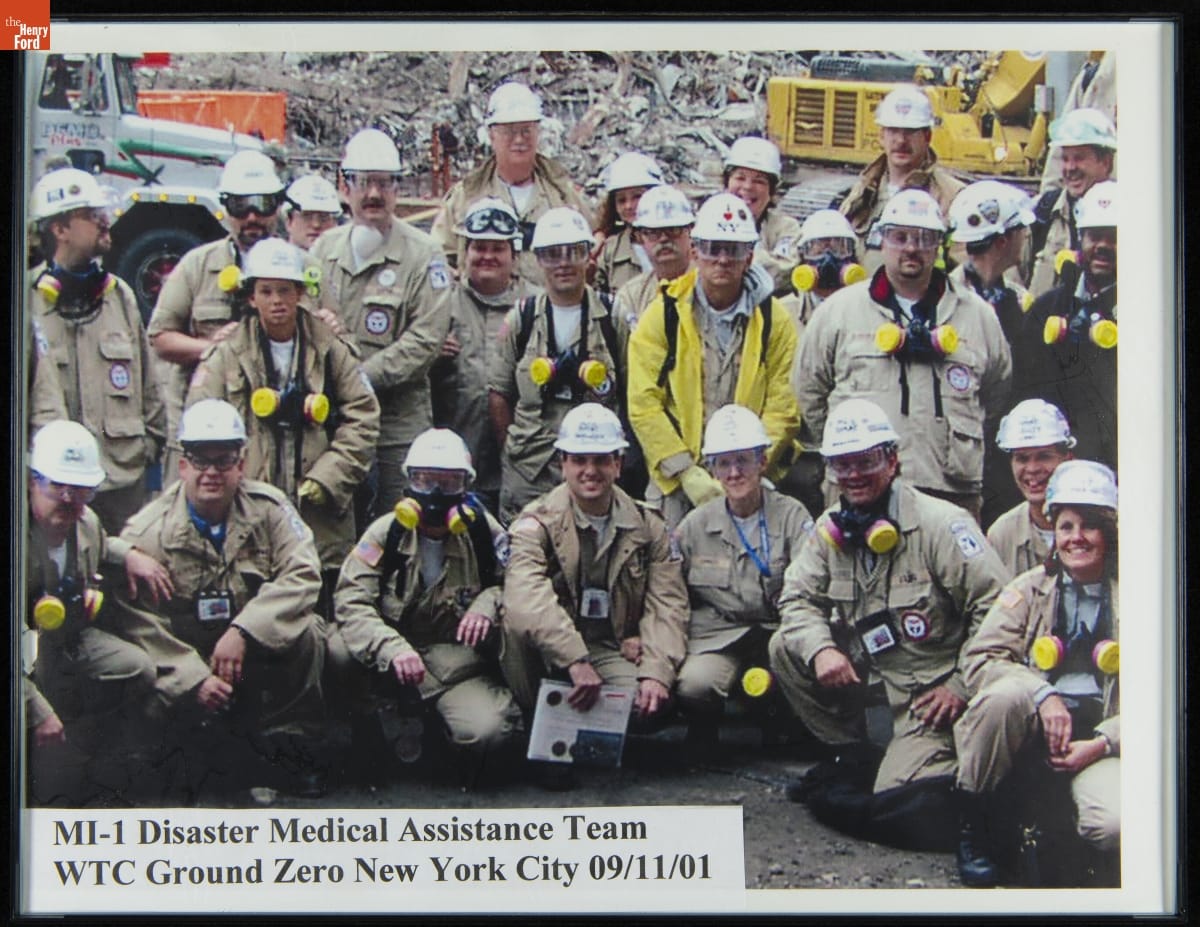 Gerry’s team at Ground Zero, pictured with the remains of the Marriott behind them. Gerry is wearing the yellow rain jacket—the “yellow canary,” as he put it. / THF625013

Gerry also received thanks from an unexpected source during his Ground Zero deployment. On a coffeebreak in the “Green Tarp Inn,” the tent where meals were provided for the responders at the site, he met a young woman who was volunteering to feed staff. She asked if she could sit with the group, told them she was Canadian, and asked them questions about their assignment. Each day, she would join them for coffee. Gerry added: “The only problem was I did not know that she was a singer/songwriter. The last day of my assignment, Alanis gave us a hug and thanked us for just sitting there and talking with her. She asked if she could sign our hats. When I got home, one of my daughters saw the signature of Alanis Morrisette on the hard hat and asked, ‘Did you meet her?’ I said, ‘Yes, we had coffee together every morning.’ Well, my daughter began to educate me on her.” 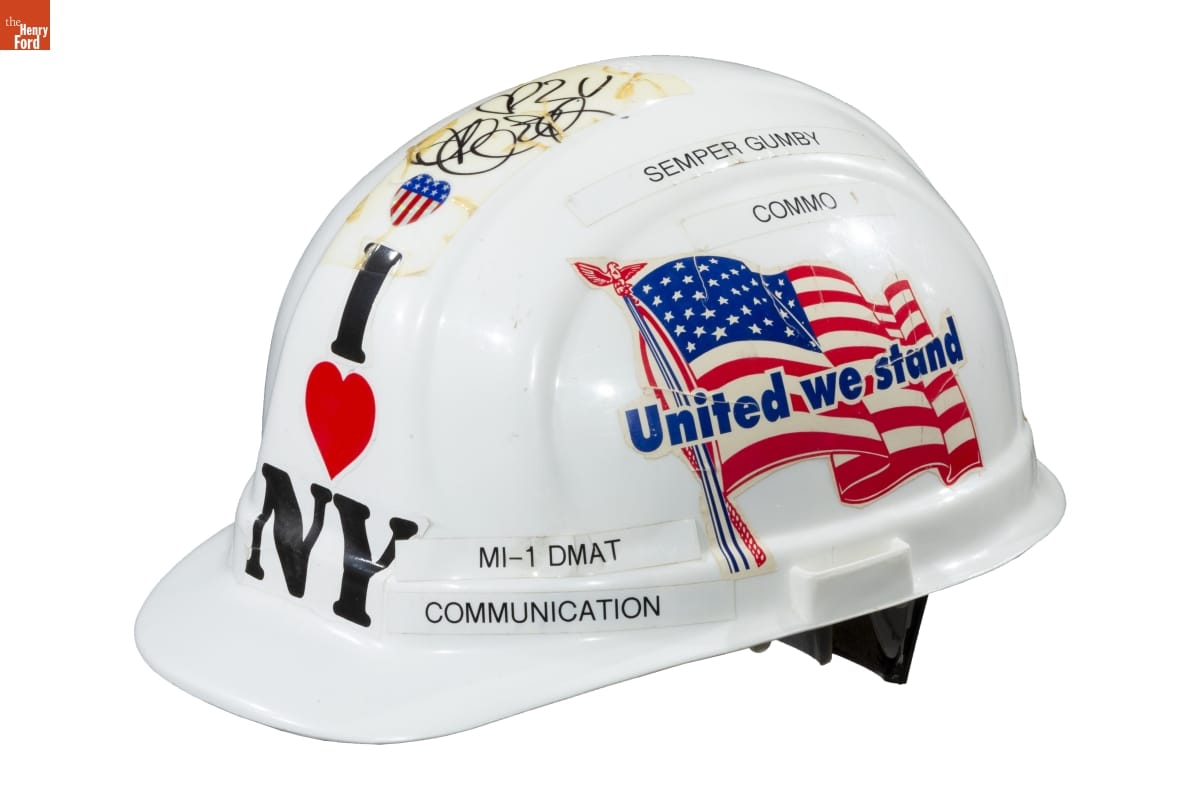 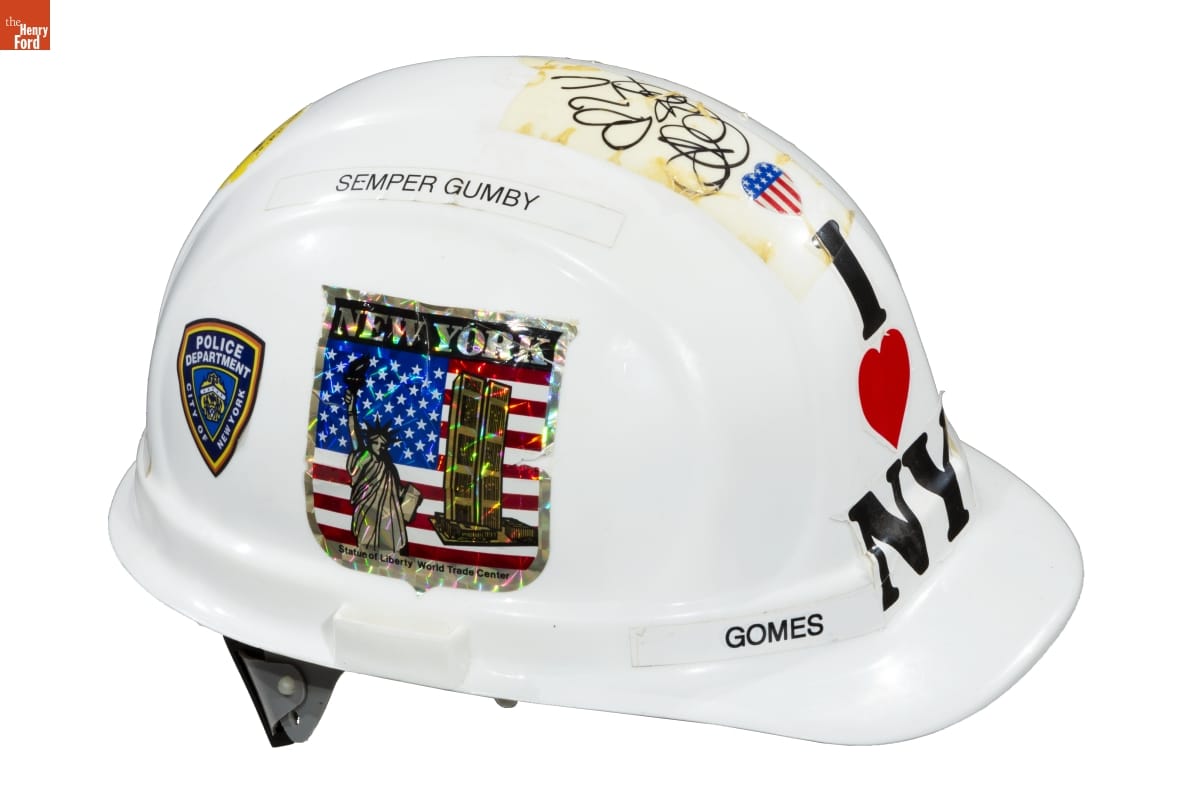 Two views of the hard hat that Gerry Gomes wore during his deployment at Ground Zero. Beyond Alanis Morrisette’s signature, you can see decals on the hat. “Semper Gumby” was the team’s motto, indicating their flexibility to do what it takes to get the job done. The American flag includes the phrase “United We Stand,” the motto of workers at Ground Zero. The “I Love New York” decal was “our way to support the people not at Ground Zero,” while police and firefighter stickers were a “thank you” from officers stationed at Ground Zero that Gerry’s team supported. / THF188516, THF188517

Gerry is now retired both from Ford Motor Company and from the NDMS, but we are lucky to have had him as a volunteer at The Henry Ford since 2018, helping out first at Edison Illuminating Company’s Station A in Greenfield Village and the model trains in Henry Ford Museum of American Innovation, and later with our major car shows, Motor Muster and Old Car Festival. We are grateful for his volunteer work for us—as well as for his work at Ground Zero, on behalf of all Americans, 20 years ago.

To see more artifacts related to 9/11, visit our Digital Collections—or dig even deeper with the stories and collection of New York’s 9/11 Memorial and Museum.


Ellice Engdahl is Digital Collections & Content Manager at The Henry Ford. Many thanks to Gerry Gomes for sharing his fascinating story and answering many questions.