The Deleted Slavery Passage from the Declaration of Independence 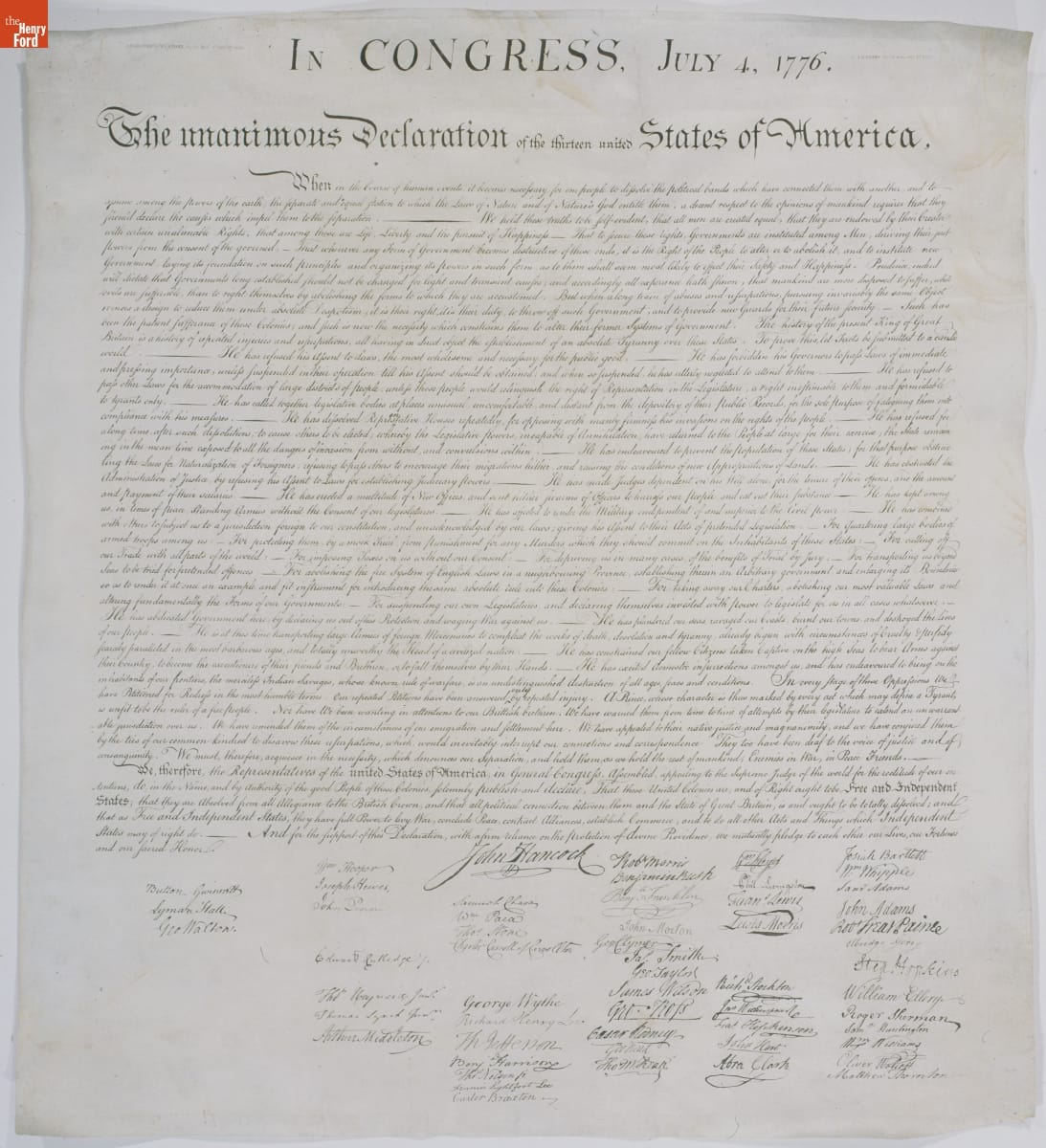 Engraved copy of the Declaration of Independence, one of only 200 copies commissioned by then-Secretary of State John Quincy Adams, printed 1823. / THF14572

The Declaration of Independence, formally adopted on July 4, 1776, by members of the Second Continental Congress, was America’s manifesto against British tyranny. Thomas Jefferson, a Virginia delegate to the Continental Congress (and eventually a U.S. president), had been charged with composing the draft of this document.

Most people are familiar with these iconic lines from the Declaration:

…We hold these truths to be self-evident, that all men are created equal, that they are endowed by their Creator with certain unalienable Rights, that among these are Life, Liberty and the pursuit of Happiness…

This is the statement that is most memorable. It is the passage that has been invoked repeatedly throughout our history as a call to action, the passage that is still referenced today as the rationale for upholding people’s individual rights.

But there is much more to the Declaration of Independence than these lines. Further down, within a lengthier portion of the document, Jefferson’s initial draft included a scathing denouncement of slavery. If this passage had been retained, our country’s history might have been very different. But it was deleted.

Why did Jefferson—a slaveholder himself—write this passage denouncing slavery, why was it deleted, and what was the long-term impact of that decision? 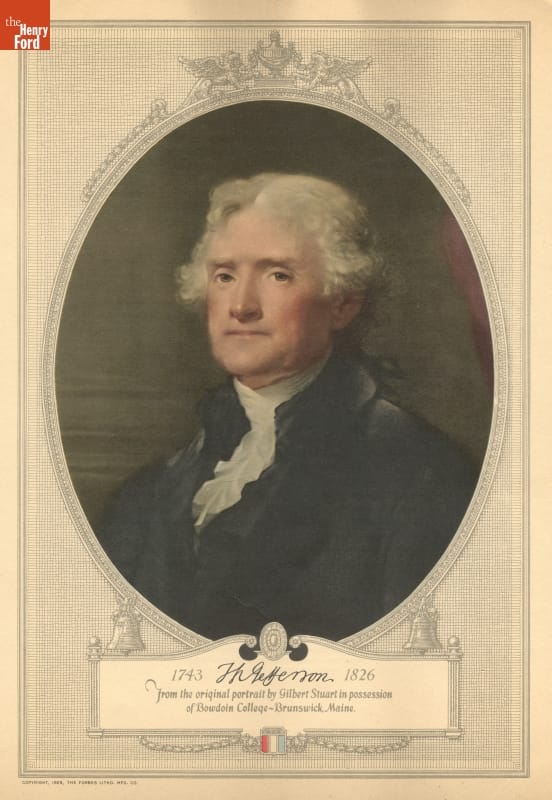 The memorable first portion of the Declaration of Independence is full of soaring rhetoric derived from the Enlightenment ideals that Jefferson favored. The Enlightenment, an 18th-century European intellectual movement, stressed liberty and equality as natural human rights. The words in this first portion of the document were more philosophical and aspirational than the reality—and, indeed, they have lent themselves to reinterpretation and redefinition throughout our country’s history.

The later portion pertained to specific issues of the time. It contained a list of perceived wrongdoings against the colonists for which Jefferson blamed Great Britain’s King George III. These included the king’s repeatedly interfering with the colonists’ laws and ability to govern themselves; his placement of hostile troops in their midst; and his generally acting like a “tyrant” while violating Americans’ rights (for more on colonists’ mounting frustrations, see our post about the Boston Massacre). Nearly 30 charges were railed at King George III in Jefferson’s first draft, all intended to justify the colonists rebelling against him.

Included in this list was a 168-word passage condemning slavery as one of the many evils foisted upon the colonists by the British crown. Jefferson’s inclusion of this “evil” within this context was a tactically shrewd decision. It was easy to blame King George III for the institution of chattel slavery (that is, the buying and selling of people as property) with the rest of the “long train of abuses.”

The first part of the so-called “slavery passage” was aimed directly at the King:

He has waged cruel war against human nature itself, violating its most sacred rights of life and liberty in the persons of a distant people who never offended him, captivating & carrying them into slavery in another hemisphere or to incur miserable death in their transportation thither…

The second part of this passage alluded to a 1775 proclamation by British Lord Dunmore, which offered freedom to any enslaved person in the American colonies who volunteered to serve in the British army to fight against the American patriots:

…he is now exciting those very people to rise in arms among us, and to purchase that liberty of which he has deprived them, by murdering the people on whom he has obtruded them: thus paying off former crimes committed again the Liberties of one people, with crimes which he urges them to commit against the lives of another.

Lord Dunmore’s 1775 proclamation indeed inspired thousands of enslaved African Americans to seek liberty behind British lines. It also incensed American patriots. Including a direct reference to this, Jefferson knew, would further rally colonists behind the cause for independence and their commitment to rebellion. 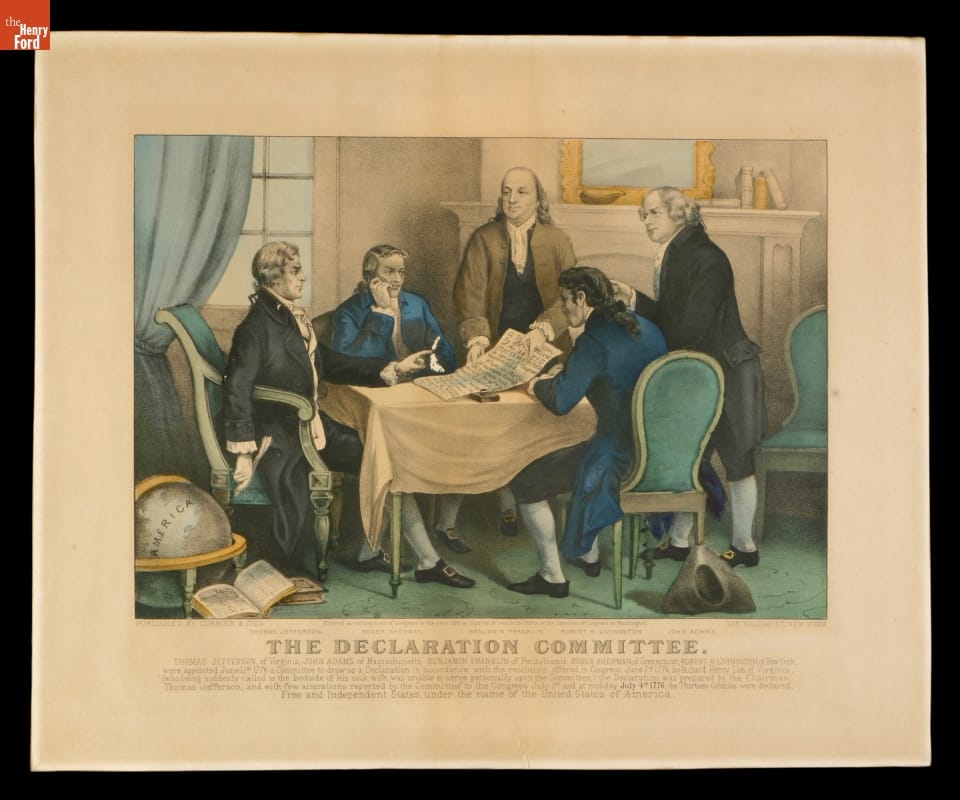 After four members of a small sub-committee reviewed Jefferson’s draft, the entire 56-member Second Continental Congress then debated its merits. The exact circumstances of this debate may never be known, as there is no written record of it. We do know, however, that during this debate, the slavery passage was removed.

Why did this occur?

The short answer is that too many delegates, and the colonies they represented, had a vested interest in perpetuating the institution of chattel slavery. Southern plantation owners insisted that they needed free labor to produce tobacco, cotton, and other cash crops for export. Northern shipping merchants depended upon the trans-Atlantic triangular trade of rum, sugar (generally in the form of molasses), and enslaved Africans. At the time, slavery existed in all 13 colonies, and at least one-third of the delegates to the Continental Congress (who would go on to become the signers of the Declaration of Independence) owned slaves themselves.

In addition to their own self-interest, the delegates had a larger intent in mind when they deleted the references to slavery in the document. They realized that this manifesto would inevitably lead to war. This document had to convince thousands of colonists to voluntarily risk their lives in a rebellion against the British. The grievances against King George III needed to be ironclad and compelling. They had to unify Americans from 13 very different colonies and from all walks of life.  They needed to clearly distinguish friends from enemies. Removing the slavery passage, the delegates felt, helped clarify their arguments and achieve these goals.

This Connecticut patriot enlisted in the Continental Army just before the Declaration of Independence was formally approved. / THF126080

Finally, there was also a prevailing belief at the time that slavery in America was on the wane—that the general emancipation of slaves was imminent and inevitable. Taking the path of least resistance, the delegates chose not to face this divisive issue head-on. Their delay tactic would not last for long, however, as the issue immediately emerged again during the drafting of the U.S. Constitution in 1787. 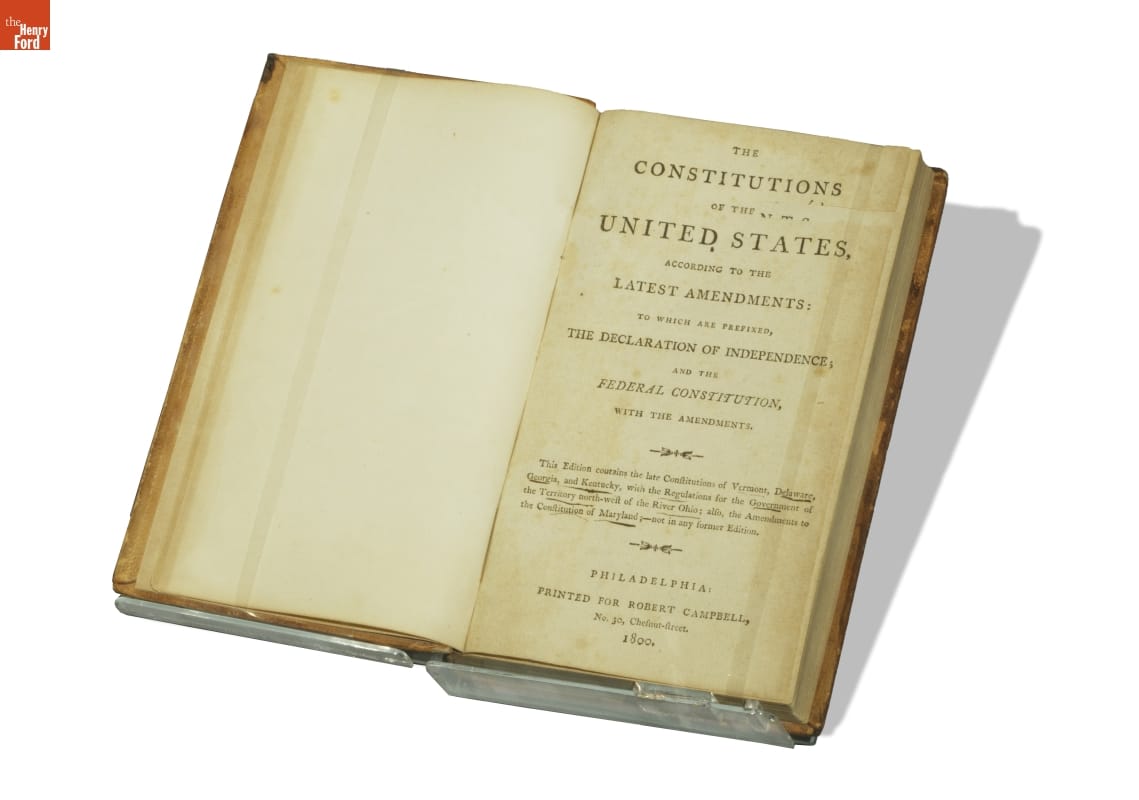 Copy of the U.S. Constitution, a rare survivor from 1800, including the text of the founding documents as well as the constitutions of the 15 then-existing states and the Northwest Ordinance, which regulated the Northwest Territory. / THF155864

In the end, the delegates replaced the deleted slavery clause with a passage that instead highlighted King George’s incitement of “domestic insurrectionists among us”—a direct reference to the British stirring up, encouraging, and supporting warfare between colonists and Indigenous tribes:

He has excited domestic insurrections amongst us, and has endeavored to bring on the inhabitants of our frontiers, the merciless Indian Savages, whose known rule of warfare, is an undistinguished destruction of all ages, sexes and conditions.

This was a statement, the delegates believed, that the colonists could truly rally behind.  They made no more changes after that. 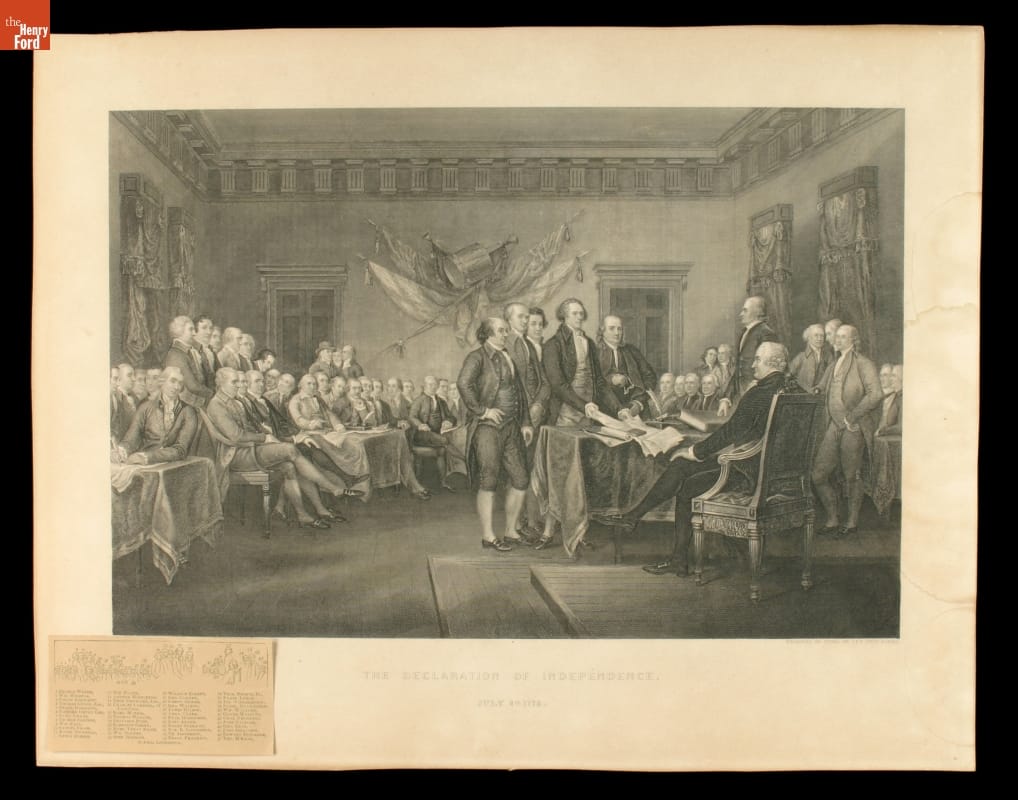 This engraving depicts the June 28, 1776, presentation of the draft of the Declaration of Independence from the five-member Declaration Committee to the entire Second Continental Congress. Engraving made about 1850 by J.F.E. Prud’homme, based upon an 1817 John Trumbull painting. / THF97322

And so, on the fourth day of July, 1776, with the adopted Declaration of Independence in hand, the thirteen American colonies formally declared their independence from Great Britain.

Thomas Jefferson quietly seethed about the changes to his draft of the document, especially the deletion of the slavery passage. He was, in fact, deeply conflicted about the institution of chattel slavery. He understood that his own livelihood depended upon its perpetuation and, over his lifetime, enslaved over 600 people (including his own children by enslaved woman Sally Hemings). At the same time, he bemoaned the existence of slavery and was continually frustrated that he could not extricate himself from its “deplorable entanglement.” As U.S. president in 1807, he passed significant legislation prohibiting the “importation of slaves to any port or place within the jurisdiction of the United States.” But he also suspected that Black people were inferior and supported the popular notion that newly emancipated slaves should leave the U.S. and resettle in Africa or the West Indies.

Impact of the Revised Passage

What the signers of the Declaration of Independence did not realize at the time was that instead of weakening or dying out completely, slavery would become more widespread, profitable, and entrenched in American society. They did not know that slavery would become the central defining problem that would lead to the bloody U.S. Civil War.

The decision to remove the slavery passage and replace it with a passage about “domestic insurrectionists” (i.e., Indigenous tribes) also left a long shadow over the definition of who was considered part of the new republic and who was not—in essence, defining who was an American and who was an outsider (African Americans, both enslaved and free, as well as Native Americans). It consequently ensured that systemic racism against these groups would become as foundational as the American ideal of “life, liberty, and the pursuit of happiness."

The deletion of Thomas Jefferson’s slavery passage in the Declaration of Independence had powerful and far-reaching consequences. Little did the Founding Fathers know that that we would still be feeling those reverberations today.


Donna R. Braden is Senior Curator and Curator of Public Life at The Henry Ford. This blog post is part of a series that sheds new light on stories told within the With Liberty & Justice for All exhibition in Henry Ford Museum of American Innovation.