Beginning in 1915, Henry Ford, began developing the Rouge property in Dearborn, for a new Ford Motor Company plant on the east side of the Rouge River. The plan was to utilize the river to transport raw materials from coal mines and lumber mills to the factories. By 1923, the “river navigation project” was complete. The Rouge had become such a large facility, however, that one ship could not handle transporting the huge quantities of raw materials needed for production. Mr. Ford began acquiring his own fleet of ships for the company by ordering two ore carriers to be built. These ships, the Henry Ford II and Benson Ford– named after Mr. Ford’s grandsons – and would remain in service for over 50 years. 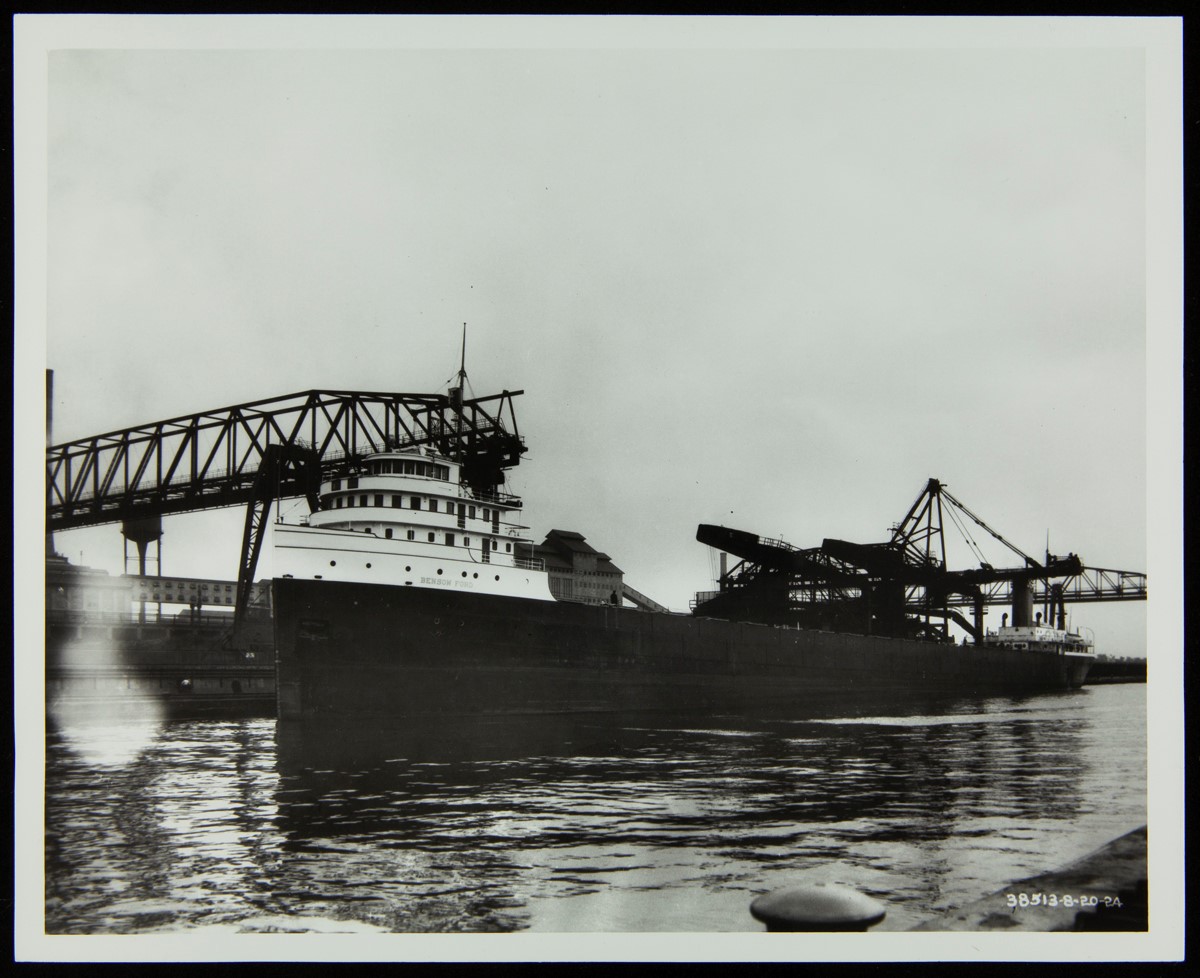 The freighters Benson Ford and Henry Ford II were the two most modernized ships on the water at the time. Ships of the day were mainly powered by coal fired steam propulsion engines, however, the Ford ships were each equipped with a British designed 3,000 horsepower diesel engine.

Operations for the fleet were growing so rapidly that by 1925 it was necessary to establish a Marine Department within Ford Motor Company. Under the direction from Mr. Ford, the department began building out the fleet, adding the East Indian later that year. By the 1930s, Ford Motor Company expanded overseas into Europe, Asia, and South America with export plants established on the east coast. During this time, Mr. Ford purchased 200 surplus World War I merchant vessels from the United States government. Of these ships, twenty-two were converted to barges, ocean-going ships and canal carriers; the rest were scrapped for the Rouge’s steel furnaces. 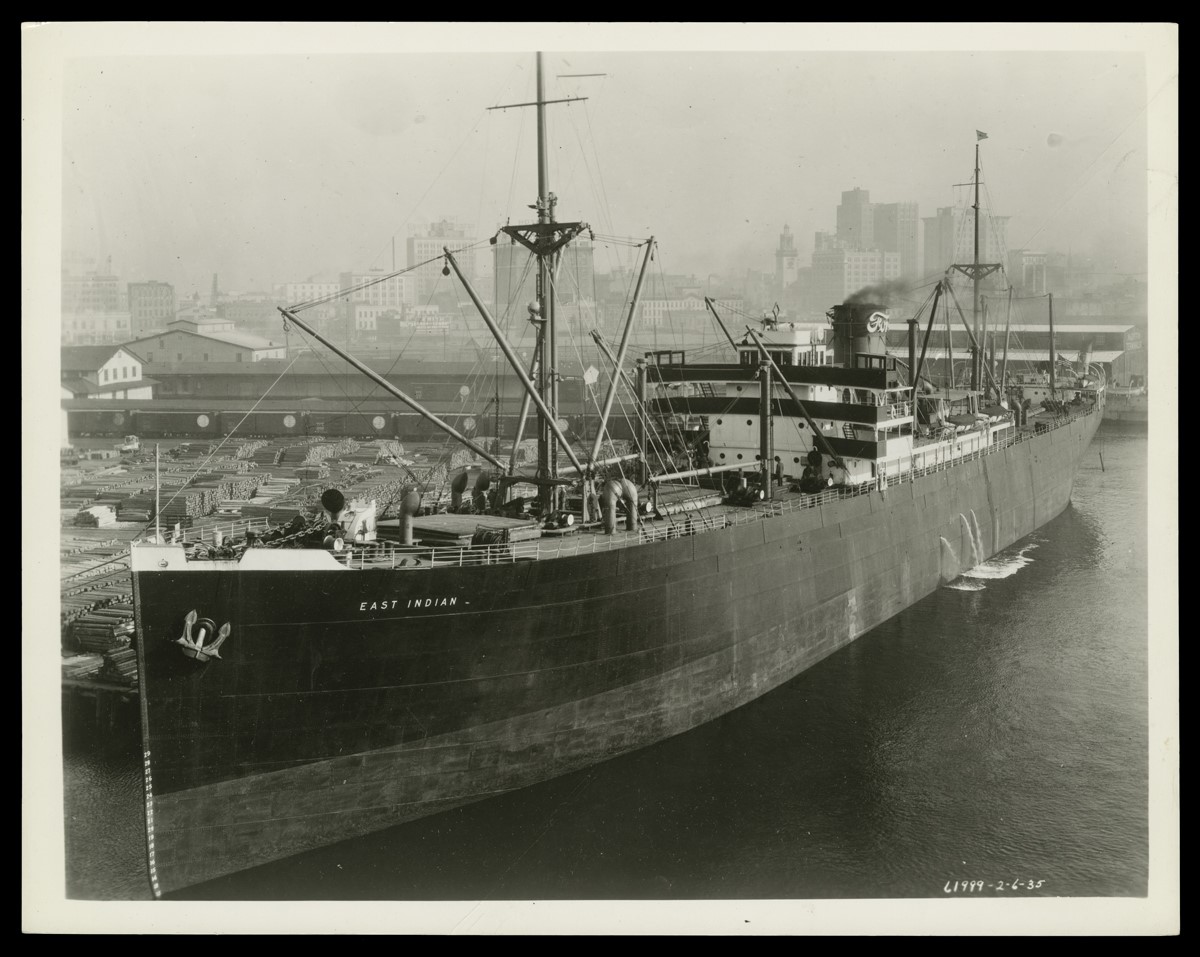 After the East Indian was purchased in 1925, it was reoutfitted from a steam powered engine to a diesel, like the Henry II and Benson before her. At 461 feet long, and with her new engines totaling 3,000 horsepower, the East Indian quickly became the most powerful merchant motorship under the American flag.

At the start of World War II, the fleet carried less ore and fewer finished parts to Ford factories forcing the company to cut back on operations during the lake shipping seasons, placing more emphasis on non-Ford cargoes. By June 1942, 500 American ships were sunk by submarines in the Atlantic ocean with casualties of over 5,000 crewmen. During this time, almost the entire Ford Fleet was recruited by the United States government for war service.

In November 1941, the Green Island, the third of the Ford ships to go to war, was put on a maritime commission in the Caribbean. Unfortunately, only six months later, the Green Island was hauling sugar from Cuba to the United States when a German submarine came upon her and ordered her crew into lifeboats. After all the crew members were safely away from the ship, the ship was torpedoed and sent her to the bottom of the ocean. After being held prisoner by the Germans, the entire crew was rescued, the only Ford crew to be so lucky. 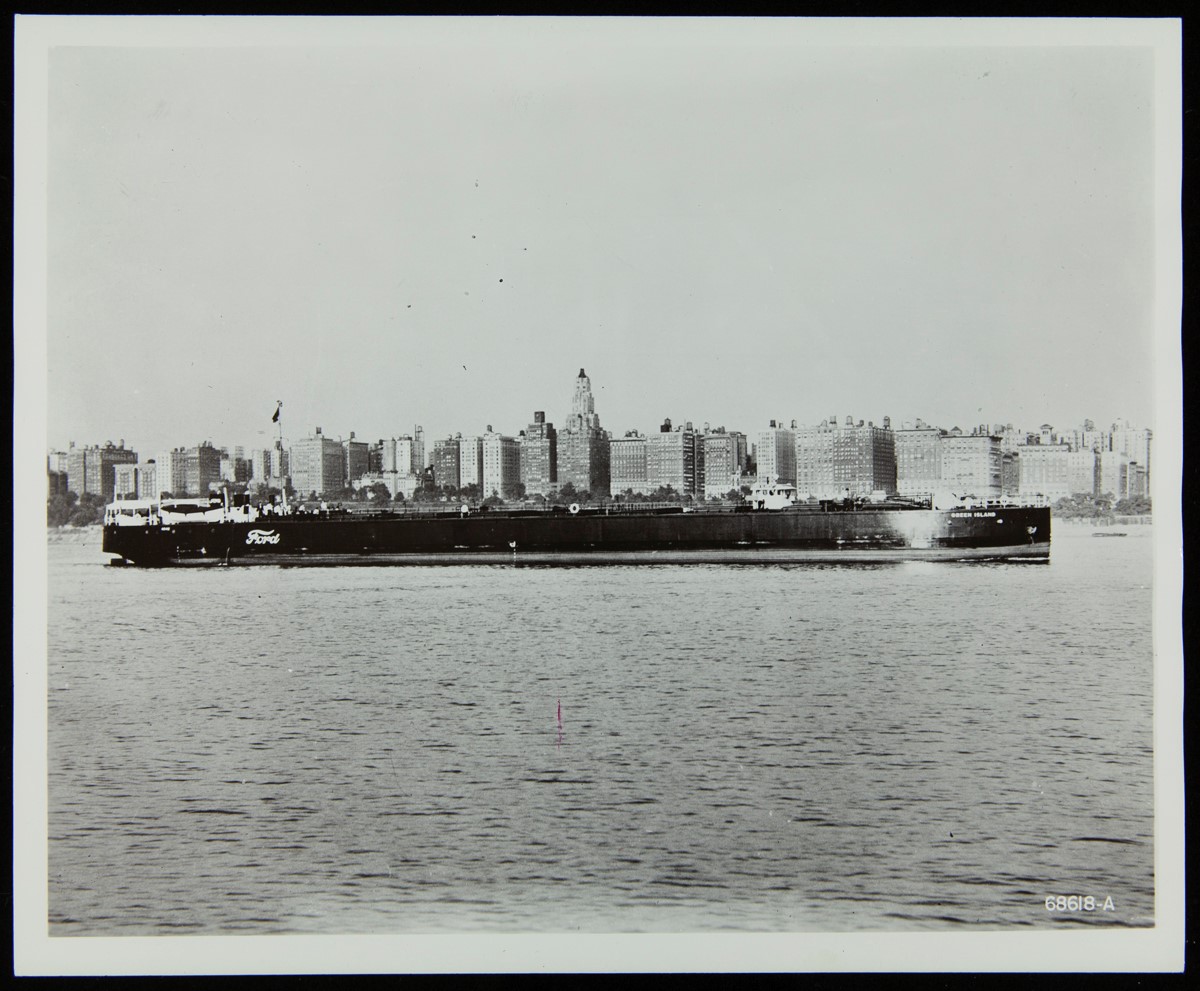 A month before the sinking of the Green Island, two of Ford’s ocean-going lakers, Oneida and Onondaga, were turned over to the government in June 1942. Only one month later, on July 13, 1942, the Oneida was on a bareboat charter when it was sunk by a German submarine off the east coast of Cuba; six of the crew were lost. The Onondaga was sunk just ten days after that, about 200 miles west of where her sister vessel was lost; fourteen of the crew, including the captain were lost along with one passenger. 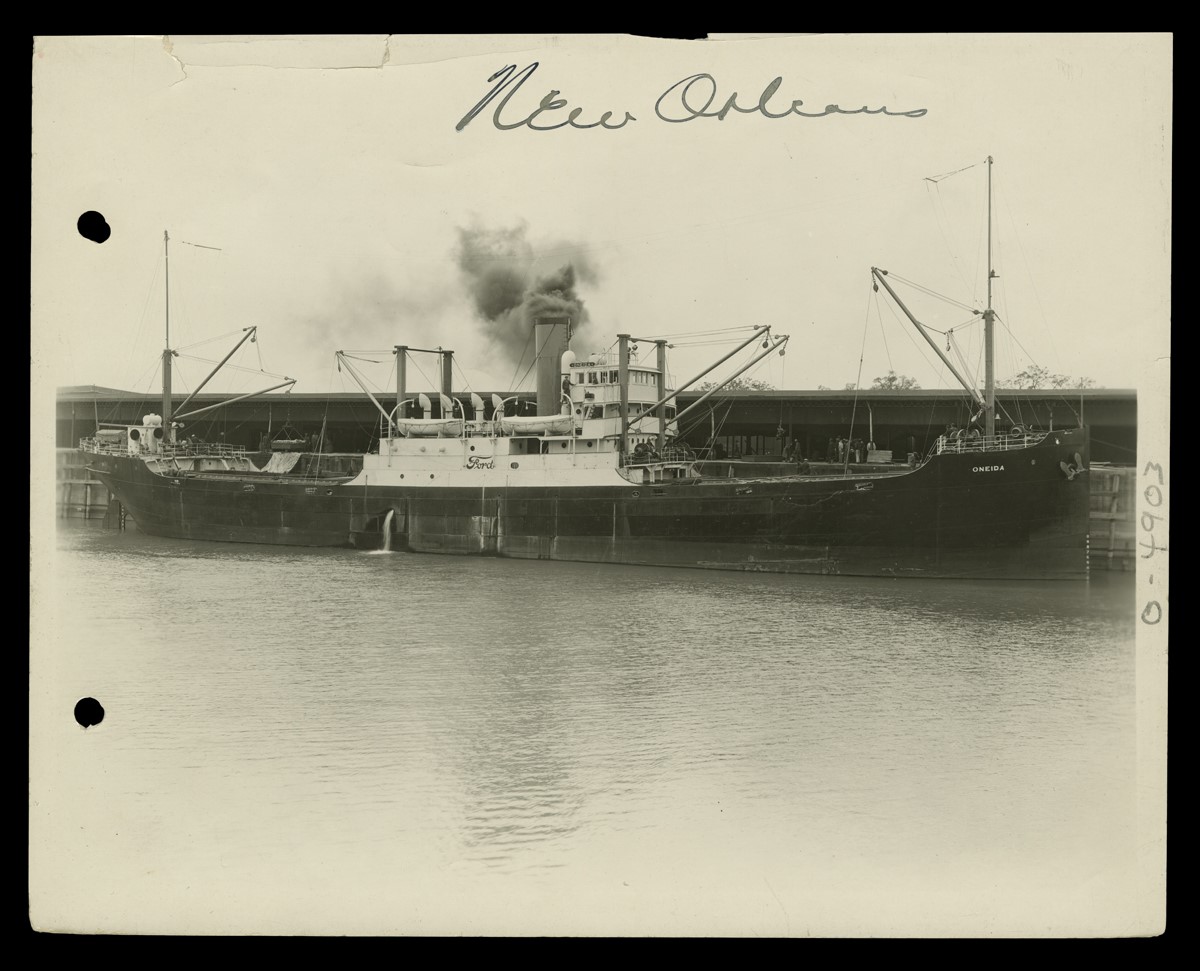 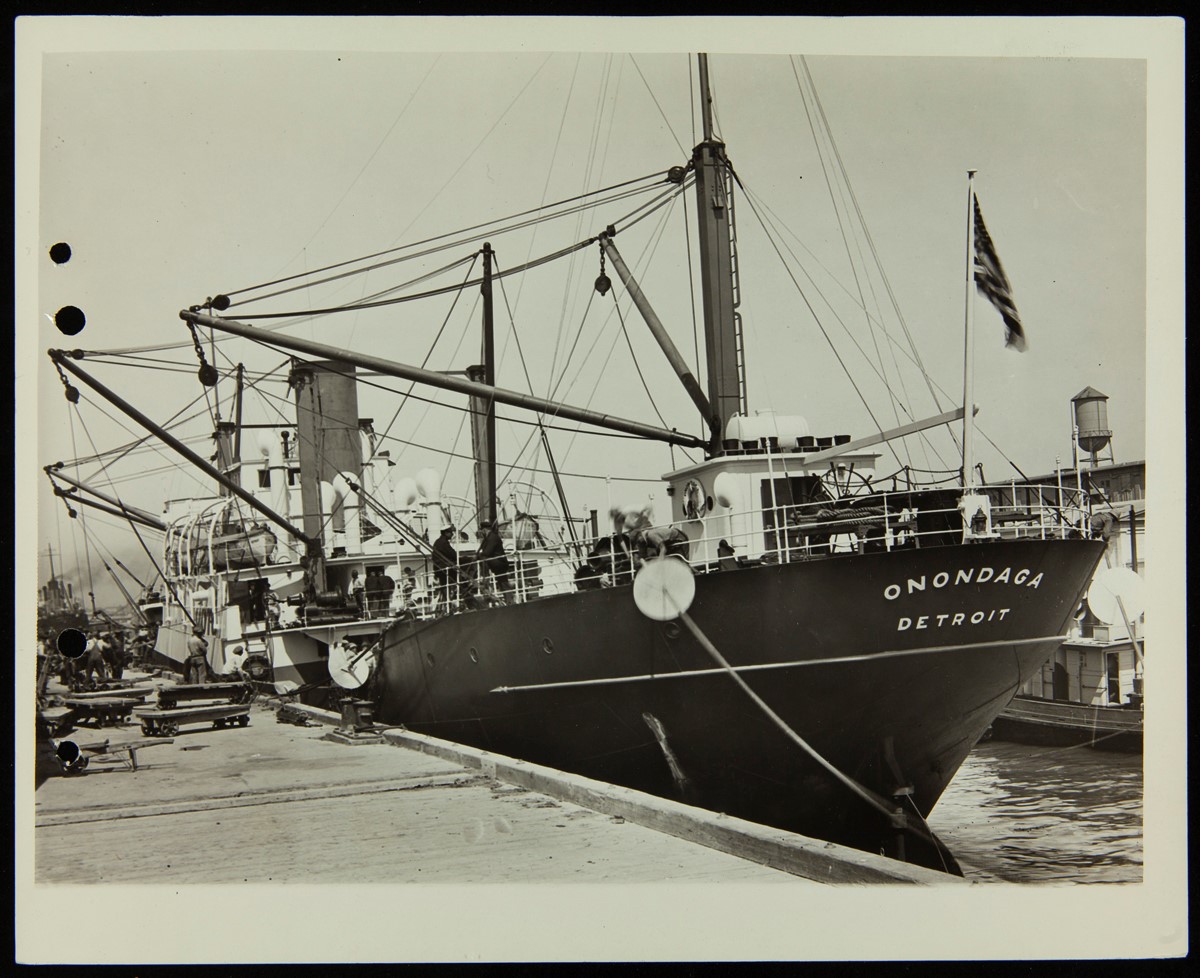 In early 1942, the freighter East Indian was commissioned by the WSA for a time charter in Capetown, South Africa. The ship and her crew left Capetown on November 2, 1942 on a planned out-of-the-way course that was meant to avoid German submarines. Unknown to them, German submarines had spotted the ship shortly after they left port; at 5 o’clock in the afternoon on November 3, a torpedo struck the ship, sinking it within two minutes. The crew who were able to get aboard lifeboats did, but remained at the mercy of the Nazis and the ocean. 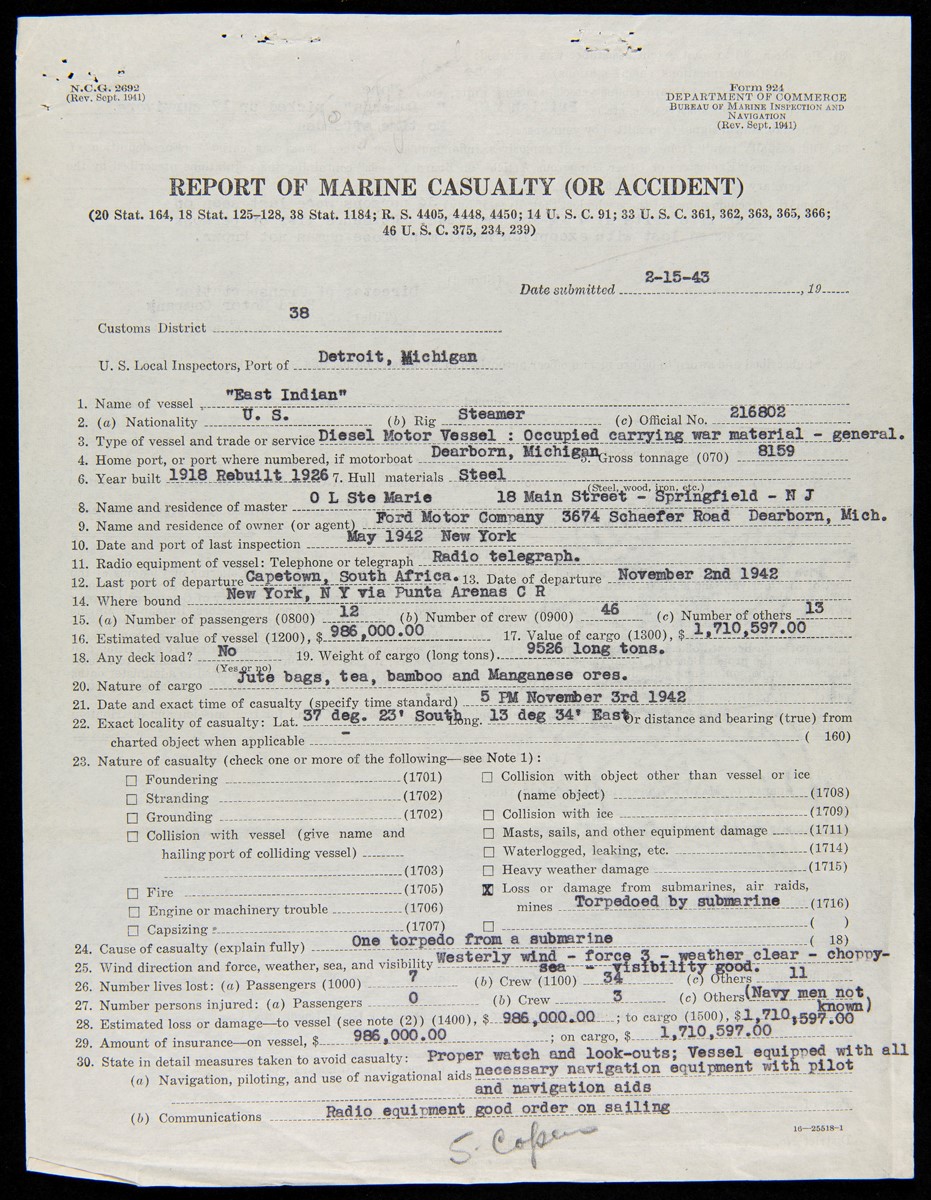 Report submitted February 15, 1943 detailing the sinking of the East Indian on November 3, 1942. Details include information about vessel and master of ship; information about last port of departure and trip; type of cargo ship was carrying; purpose of trip; and information on lost crew members. 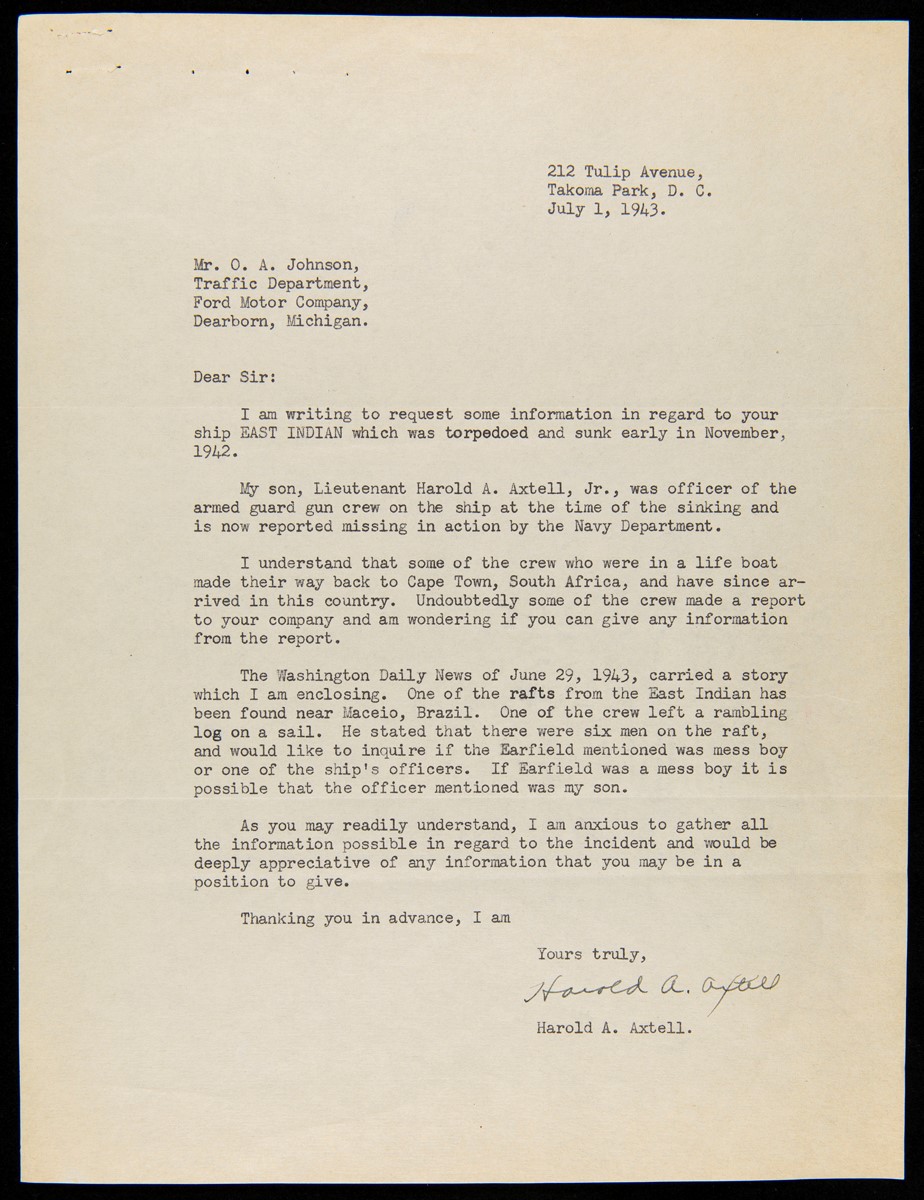 Harold Axtell's son was aboard the East Indian when it sank Nov 3, 1942.  In this letter he is still inquiring about his son's fate.  He also enclosed a newspaper clipping about 6 men from the East Indian who were found on a raft in Maceio, Brazil, and wonders if his son might be one of the men.

According to Murdoch MacLean, a survivor of the ordeal, reported that, once the ship was sunk, a German officer told the crew that “I got a beam on you at nine this morning. Had we fired then, we would have saved you 100 miles…I’m sorry, for you had a beautiful ship. However, this is war” (Snyder 57). The crew were stranded in lifeboats, with no supplies, for thirteen days after their ship sunk. A British ship, the “Durando” came upon the survivors, bringing them safely back to port in Capetown. There were 74 men aboard the East Indian with only 40 survivors. Additionally, the British rescue ship, the Durando was sunk on its way back to England, with loss of all hands.

By 1950, the Ford Fleet only delivered a fraction of the cargoes received at the Rouge Factory. In 1953, the “new Ford Fleet” was launched, which consisted of eight new additions to the fleet, including the William Clay Ford, freighter By 1975, the entire fleet was capable of hauling regular cargoes of raw materials and excess vessel capacity was available. Ford began chartering the fleet to carry cargoes for other companies through the latter half of the twentieth century. By the early 1990s, most of the original fleet was decommissioned through scrapping projects or rechristened to other companies or private buyers. The pilot house of the William Clay Ford was rehoused as part of the Dossin Great Lakes Museum on Belle Isle State Park while the pilot house of the Benson Ford was purchased by a private owner and is now a private residence on Put-In-Bay island. 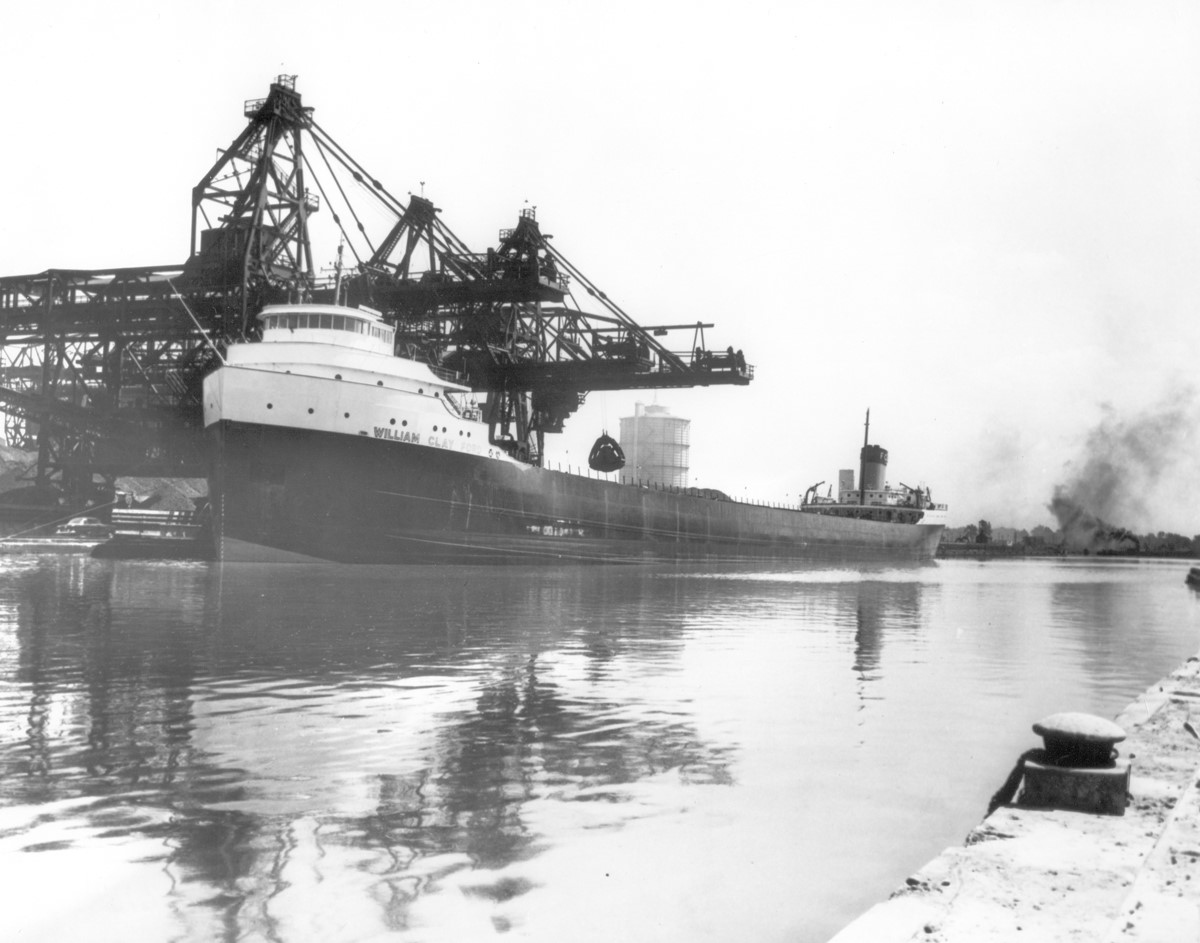 
Cory Taylor is an Imaging Technician at The Henry Ford.