The Kalamazoo Corset Company: From Songs to Strikes

Kalamazoo, Michigan, is known for its industry. For a relatively small midwestern city, it became a leader in the production of an impressive number of products, some more readily remembered today than others—including celery, paper, stoves, taxicabs, guitars, craft beer, and pharmaceuticals. At the turn of the 20th century, the Kalamazoo Corset Company gave the city more reasons to be noticed—for its high output of corsets, the advertising used to sell them, and for an historic labor strike, led primarily by women.

The Kalamazoo Corset Company began as the Featherbone Corset Company. The company’s name changed in 1894, a few years after the company was relocated 70+ miles from Three Oaks, Michigan, to the city of Kalamazoo. As the original name suggests, the company prided itself on its innovative use of turkey wing feathers—“featherbone”—which replaced the occasionally malodorous whalebone corsets (while these corsets were referred to as containing “whalebone,” it was actually whale baleen that was used, which is not bone).

While the company featured numerous lines of corsets, by 1908, they were focusing on advertising for their “American Beauty” line. These corsets were named to reflect a version of an idealized American woman—an “American Beauty.” Charles Dana Gibson had created his version of the feminine ideal of physical attractiveness, the “Gibson Girl,” during the 1890s—this “American Beauty” followed in her footsteps. The company’s use of “American Beauty” also likely referenced a deep crimson hybrid rose bred in Europe in 1875, which by the turn of the 20th century was popularized in America as the rather expensive American Beauty Rose. By associating their corset line with both the concept of the quintessential American girl and the coveted American Beauty Rose, they were sending a message to the consumer—"buy our corset and you too will take on these qualities!” 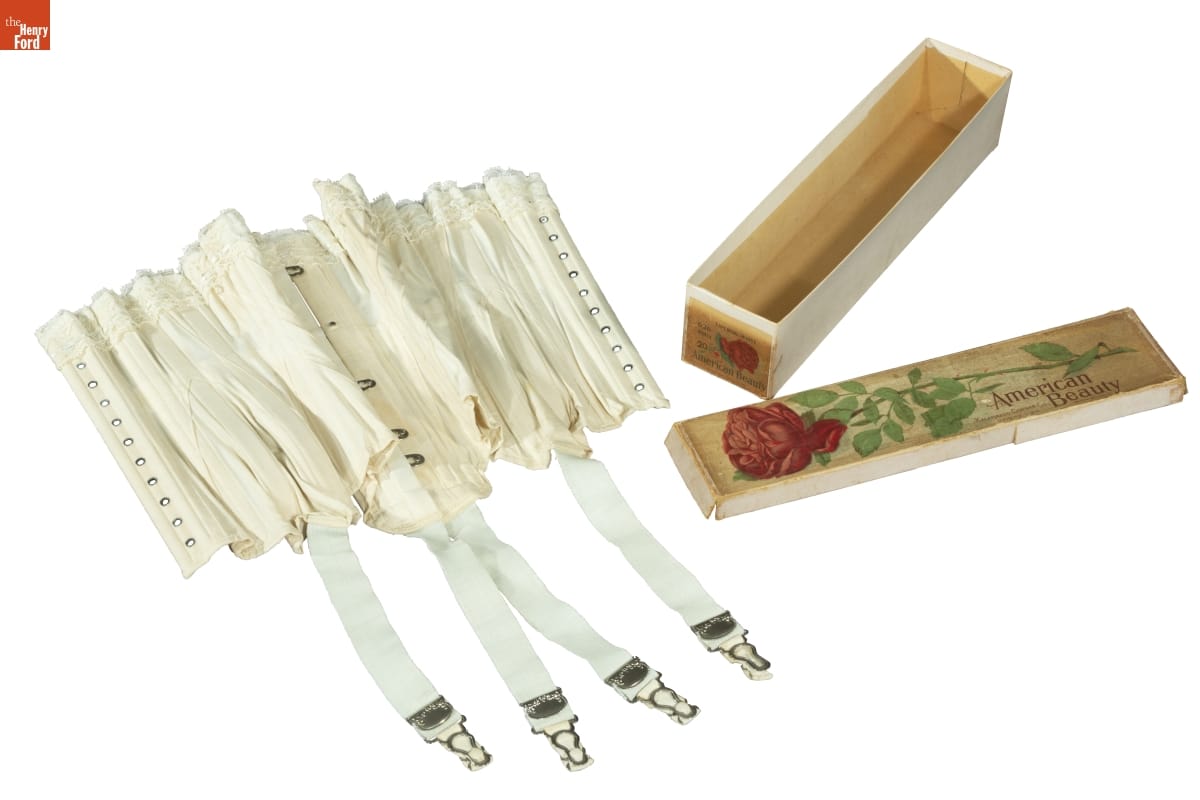 Promotional songs that advertised a product were becoming increasingly popular at the time. Since the end of the Civil War, Americans had been purchasing parlor pianos for their homes in great numbers—as many as 25,000 per year. The parlor piano became the center of most Americans’ musical experience. Music publishers, like those in the famous Tin Pan Alley of New York City, took note and sold sheet music aimed at these amateur musicians. The rise of music publishing led to a new mode of advertising for retailers and manufacturers. How better to promote your product than by creating a tune that consumers could play in their homes? It seems the Kalamazoo Corset Company agreed, hiring Harry H. Zickel and the Zickel Bros. to write three such songs to advertise the “American Beauty” line: the “American Beauty March and Two-Step” (1908), “My American Beauty Rose: Ballad” (1910), and “My American Beauty Girl” (1912). 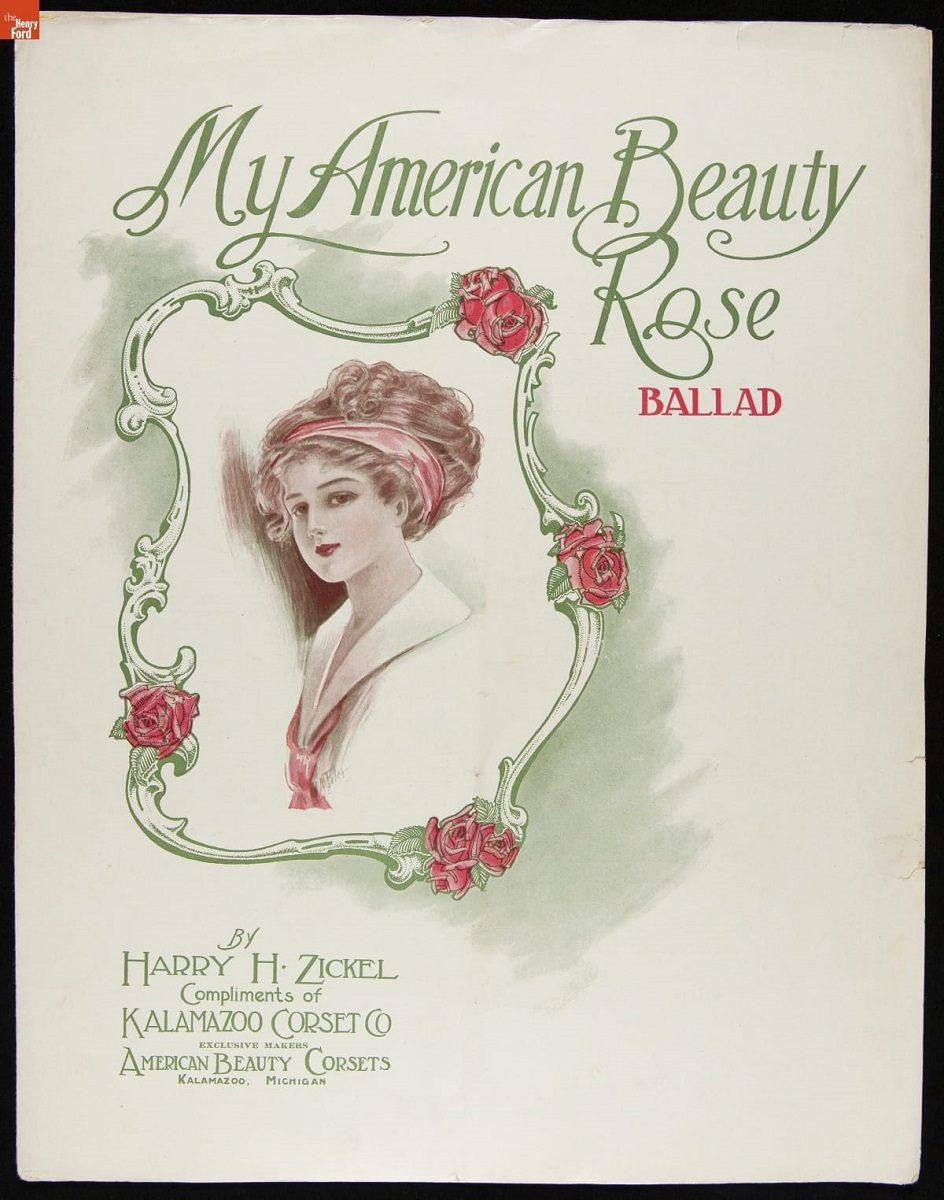 Around the time these songs were being written, issues at the company began to come to light. The company was a major employer in the area, employing 1026 people, 835 of whom were women, in 1911. This made the company the largest employer of women in Kalamazoo. First in 1911, and then again in 1912, around 800 mostly female workers went on strike. They formed the Kalamazoo Corset Workers’ Union, Local 82 of the International Ladies Garment Workers Union (ILGWU), and protested unequal wages, unsanitary working conditions, and sexual harassment.

The strike gained national attention and the ILGWU headquarters in New York City sent well-known women’s rights advocates Josephine Casey and Pauline Newman to Kalamazoo to assist in the negotiations. The strike looked to New York as an example—the infamous Triangle Shirtwaist Factory fire and subsequent “Uprising of the 20,000” strike of 1909–1910 had sparked more uprisings, some far from New York City, as in Kalamazoo’s example. 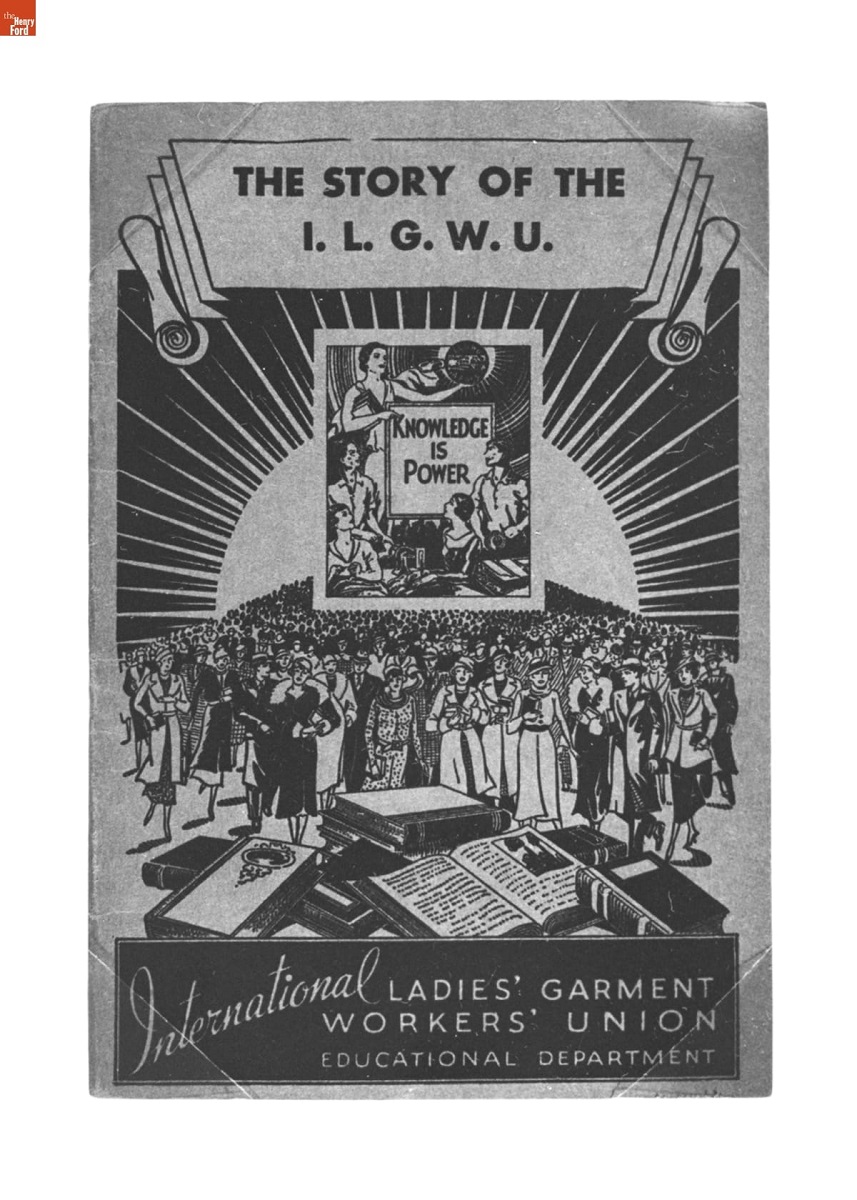 The protesters received support from local unions, but the owner of the company, James Hatfield, was a prominent Kalamazoo businessman and was well-liked among his upper-class peers. Local women’s organizations did not come to the aid of the protestors. Even the local group of suffragettes did not openly support the strike, possibly due to class issues (the suffragettes were upper class, while the women protesting were working class) or because their focus was on getting a women’s suffrage amendment to the state’s constitution passed. The women of the Kalamazoo Corset Company faced an uphill battle to obtain even a semblance of equality in the workplace.

The strike ended on June 15, 1912, ultimately unsuccessful. While an agreement was reached which addressed many of Local 82’s demands, no measures were put in place to ensure adherence, and the company quickly lapsed in its promises. Within just a few years, James Hatfield left the company to begin another, and the company was renamed Grace Corset Company. Between the financial woes wrought by the strike and changing fashions, difficult days for the company were ahead.

The Kalamazoo Corset Company’s business was women—manufacturing garments for women, shaping idealized notions of women—but it was still unable to adequately value the many women it employed by creating an equitable and safe workplace. In the end, the inability of the company to recognize the value of the gender by which they made their business helped to ensure its downfall.