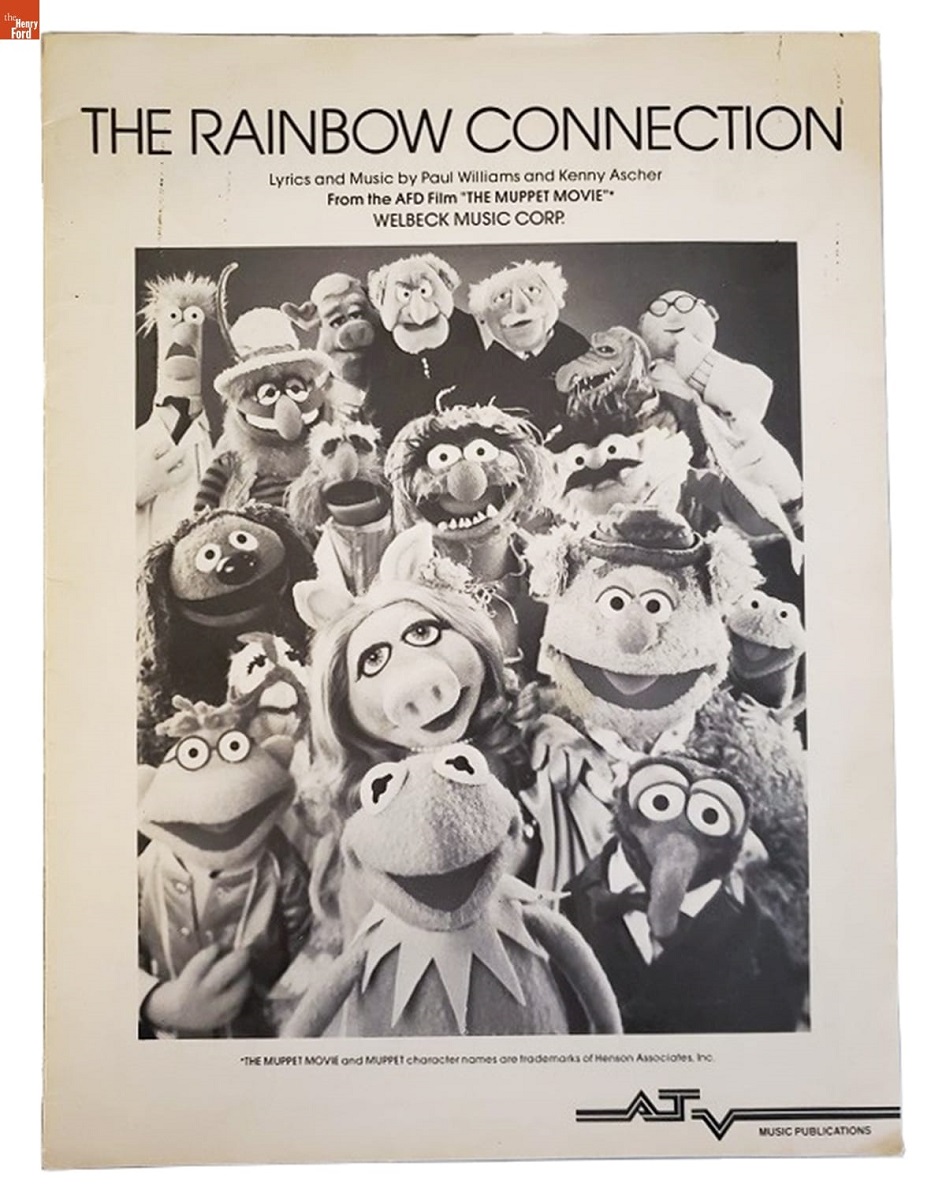 How do the Muppets retain their appeal after all these years? Yes, they’re silly. And entertaining. And very clever. But I would argue that part of their enduring—and endearing—quality is that it doesn’t take much to imagine that they are real. Sure, you can see the materials they’re made out of. And occasionally catch a glimpse of the rods that make their arms move. But sometimes—when they talk like us, act like us, even think like us—we can suspend disbelief for a moment and believe in the magic. Nowhere is this feeling stronger than in the opening scene of the 1979 film, The Muppet Movie, in which Kermit the Frog sits alone on a log in the middle of the swamp, plucks his banjo, and wistfully sings “The Rainbow Connection.”

The Muppet Movie (1979) was the Muppets’ first foray into feature films. Muppet characters had already been known for more than two decades. The particular Muppets who starred in The Muppet Movie had become familiar to us through The Muppet Show, the breakout television series that ran from 1976 to 1981. But, unlike the rapidly changing vaudeville show format of the TV series, the full-length feature film needed a plot, character development, and several songs to keep the story moving. That’s where The Rainbow Connection came in. Through this song, we find out that Kermit—The Muppet Show’s “straight man” around whom all the mayhem and the other characters’ antics revolve—has hopes and dreams of his own. This was something new, something deeper, something more serious and spiritual than we had seen from a Muppet before.

To the Lovers, the Dreamers, and You... Keep believing. #DisneyMagicMoments pic.twitter.com/zAq2Xda2Ff

Kermit the Frog shared this rendition of “The Rainbow Connection” on his Twitter account in 2020, during the early days of COVID-19 pandemic lockdowns in the United States. / via Kermit the Frog on Twitter

To capture authenticity, a real swamp-like environment was created, while Jim Henson (who performed Kermit) did the scene submerged underwater inside a cramped diving bell, holding Kermit through a rubber sleeve. This was typical Henson, a testament to the dedication that he, along with the other Muppet performers, brought to their craft. Henson was also known for hiring talented people, then entrusting them to do their best work. Such was the case when he engaged award-winning songwriter Paul Williams to compose the songs for The Muppet Movie. Williams, in turn, brought in collaborator Kenneth Ascher to co-write the songs with him.

Inspired by Jiminy Cricket’s “When You Wish Upon a Star,” from the Walt Disney movie Pinocchio, Williams called “The Rainbow Connection” Kermit’s “I Am” song. Williams went on to explain, “The thing that is so human about the song, and spiritual at the same time, is that it honors the questions, not the answers. That moment made Kermit not the mentor, not the teacher, not the preacher. He became a seeker with the audience.”

During its time, “The Rainbow Connection” was quite popular. In November 1979, it reached #25 on Billboard’s Hot 100, and it remained in the Top 40 for seven weeks. In 1980, it was nominated for an Academy Award for Best Original Song, only to lose to “It Goes Like It Goes” from the movie Norma Rae. But it has since become a timeless anthem for lovers and dreamers everywhere. Numerous recording artists have covered the song since 1980, including Judy Collins, Kenny Loggins, Willie Nelson, and The Dixie Chicks (now known as The Chicks). The entire Muppets gang joined Kermit in singing it during the climax of the 2011 movie The Muppets. It lifted our spirits when we most needed it, in the midst of lockdown during the COVID-19 pandemic, when on April 25, 2020, Kermit posted himself singing it on his official Twitter account, with the tweet: “To the Lovers, the Dreamers, and You… Keep believing.” Finally, in 2021, it was deemed “culturally, historically, and aesthetically significant” and inducted by the Library of Congress into its National Recording Registry.


Librarian of Congress Carla Hayden interviews Kermit the Frog in March 2021 about being the first frog inducted into the National Recording Registry. / via Library of Congress

In the end, “The Rainbow Connection” is more than a song composed by Paul Williams and Kenneth Ascher. And it is more than Kermit’s song. Whenever the song is performed, Williams claims, “what people see is some of Jim Henson’s pure spirit.”