The Real Toys of “Toy Story 4” 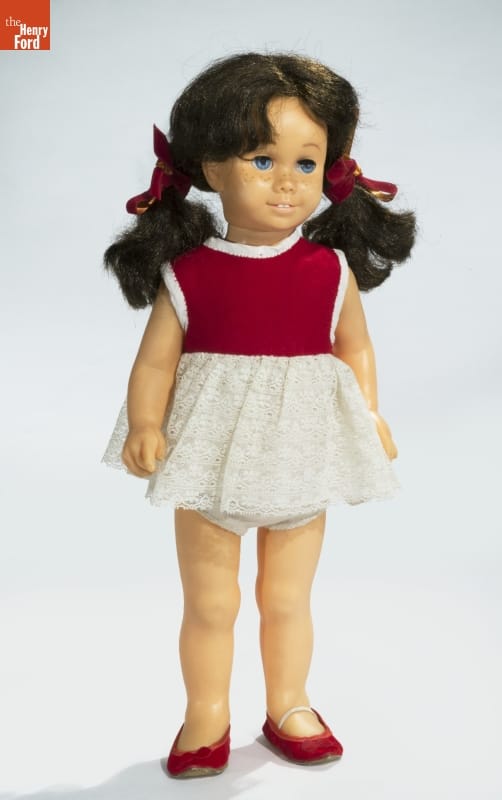 Since 1995, Disney-Pixar’s “Toy Story” films have led the industry in combining computer-generated animation with powerful, heartfelt stories. One of the reasons that adults and kids alike are drawn to these films is the clever selection of toys. More often than not, these are based upon real toys that are fondly remembered by viewers from different generations (see several examples of these from The Henry Ford’s collections in the blog post, “The Real Toys of Toy Story”).

This summer’s release of “Toy Story 4”—with its cast of old friends along with several newly introduced toys—allows us the perfect opportunity to once again delve into The Henry Ford’s collections and see what real toys provided inspiration for this fourth “Toy Story” installment. 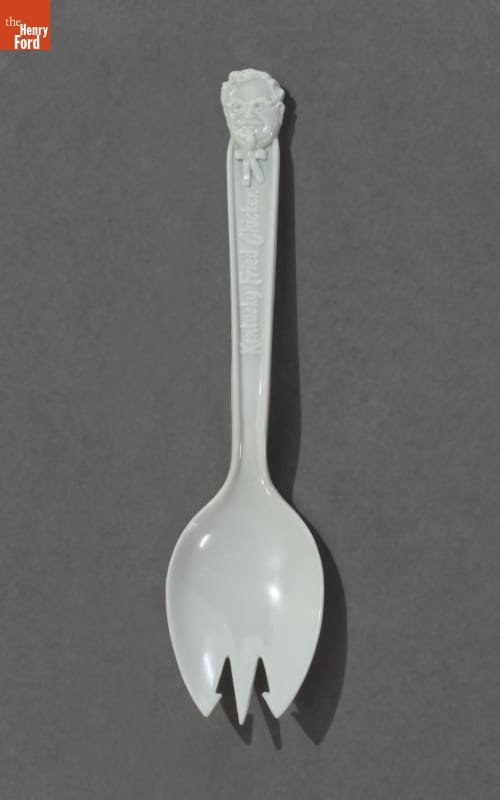 A heroic spork? Yes, indeed! This time around, Pixar decided to explore what would happen when a handmade toy named Forky (with a plastic spork for a body) meets the old gang of mass-manufactured toys.

Sporks have a long, mostly unsuccessful history. Think about it. When you combine a spoon and a fork together, neither of them is going to work very well. Interlocking or folding sets of camp utensils have always been more popular with backpackers and Boy Scouts. Nevertheless, by the 1970s, plastic sporks were making their way into fast-food restaurants—to use for, as Forky describes it, "soup, salad, maybe chili, and then the trash!” Kentucky Fried Chicken was one of the first fast-food chains to regularly feature sporks, like the one shown here. 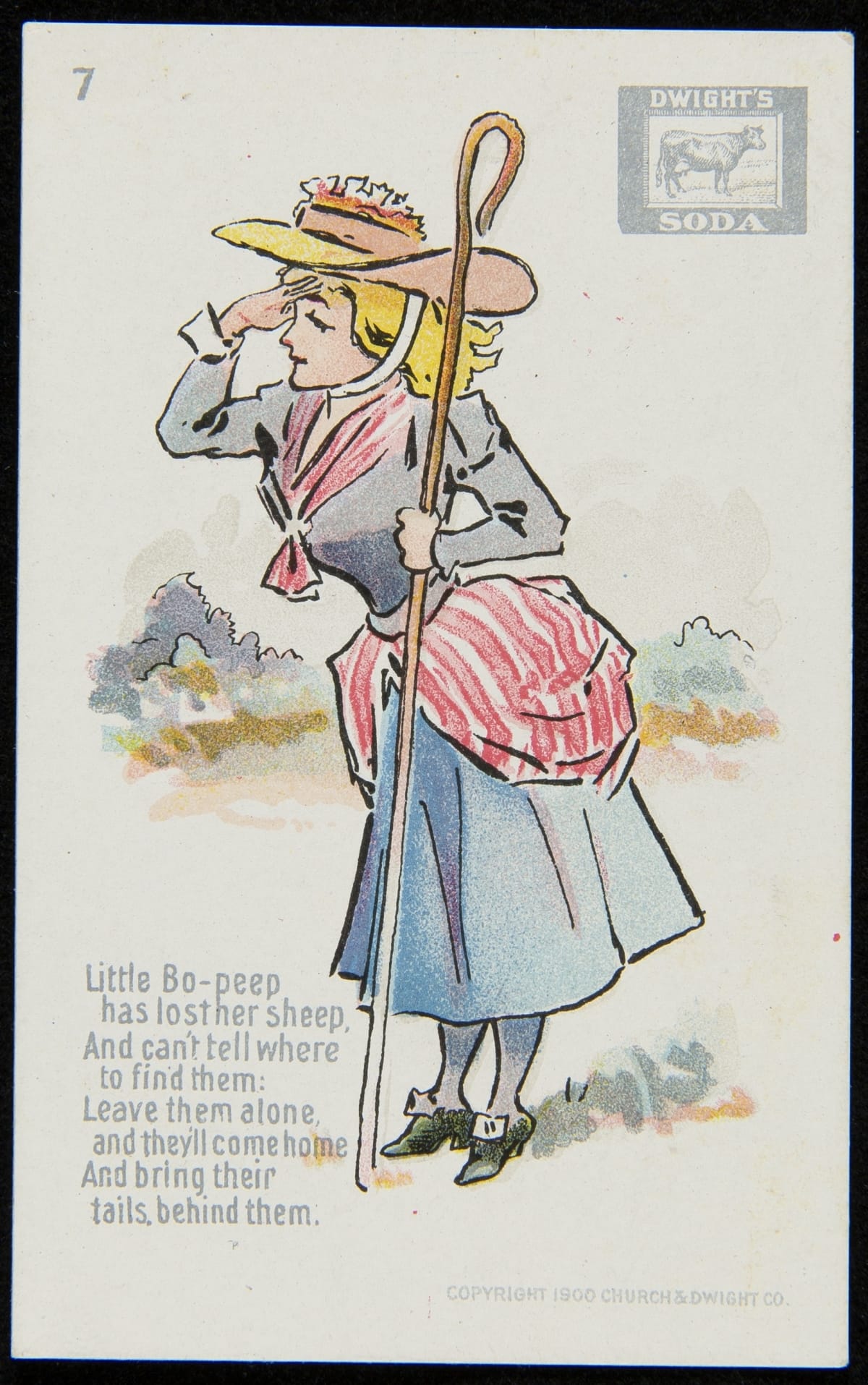 In “Toy Story 4,” Bo Peep returns as a much more assertive and heroic character. Here we learn that she was once part of a lamp that Andy’s sister, Molly, had in her bedroom to help her fall asleep. In fact, the classic nursery rhyme, Little Bo-Peep—first printed in full in 1810—reveals that this young shepherdess lost her sheep because she had also fallen asleep!

Other connections exist between the old nursery rhyme and the newer, more independent Bo Peep.  In the nursery rhyme, Bo Peep’s sheep lose their way because sheep are known to flock together. In “Toy Story 4,” Bo Peep’s three sheep are also inseparable—in fact, they are molded together as one piece, leading to often humorous results! In addition, a shepherdess would have traditionally used her crook not only to manage her sheep but also to defend them from attack by predators. In the film, Bo Peep similarly uses her crook to keep our heroes from harm. 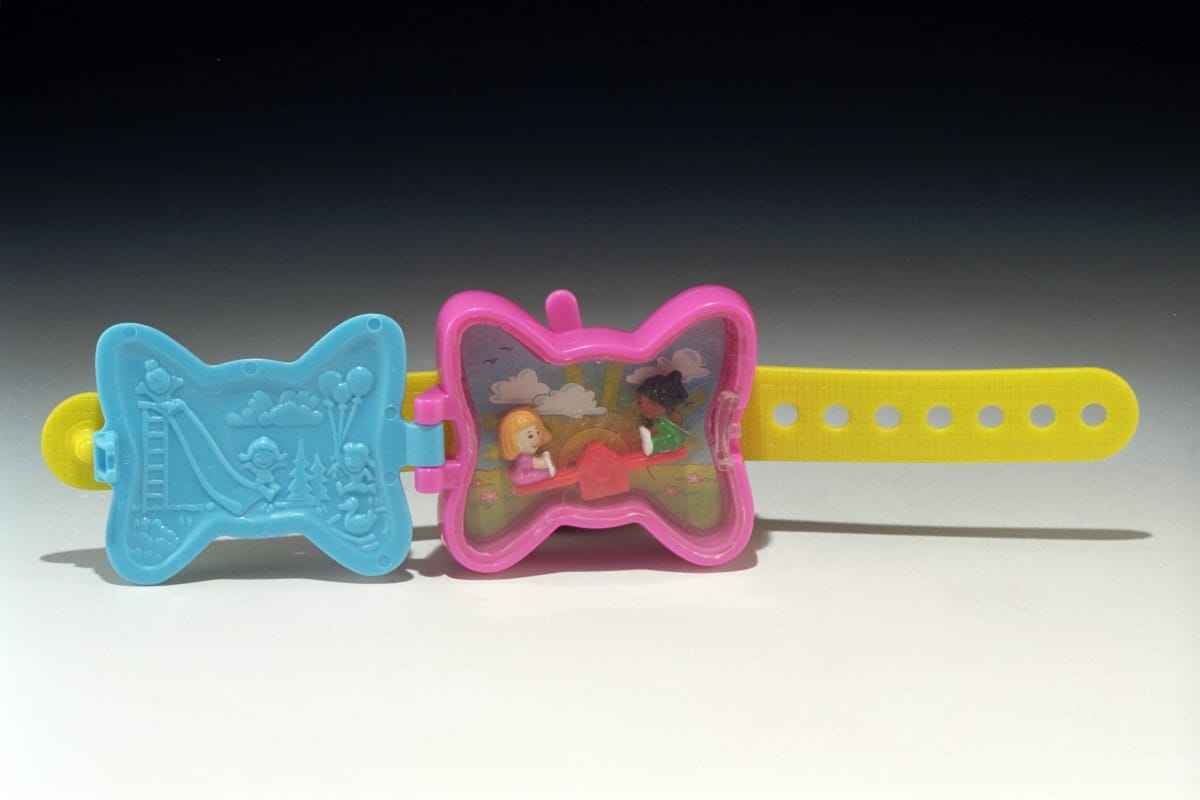 The appearance of Giggles McDimple in “Toy Story 4” likely delighted girls who grew up in the 1990s, as Giggles and her “home” reference the highly popular Polly Pockets of that era. These were first conceived by a British Dad for his daughter in 1983, using a powder compact as a tiny house that could fit in a pocket. Bluebird Toys, of Swindon, England, licensed the concept when these first appeared on the market in 1989, with Mattel in charge of distribution. In 1998, Mattel purchased the rights to manufacture Polly Pockets, then immediately redesigned them into larger dolls with changing garments. While various versions were produced after that, the original minuscule figures with jointed legs and peg-like bases that slotted into holes inside their cases never returned.

In “Toy Story 4,” Giggles compensates for her minuscule size by displaying an air of confidence and a can-do attitude—just the kind of out sized personality that little girls of the 1990s might have ascribed to their own Polly Pockets. 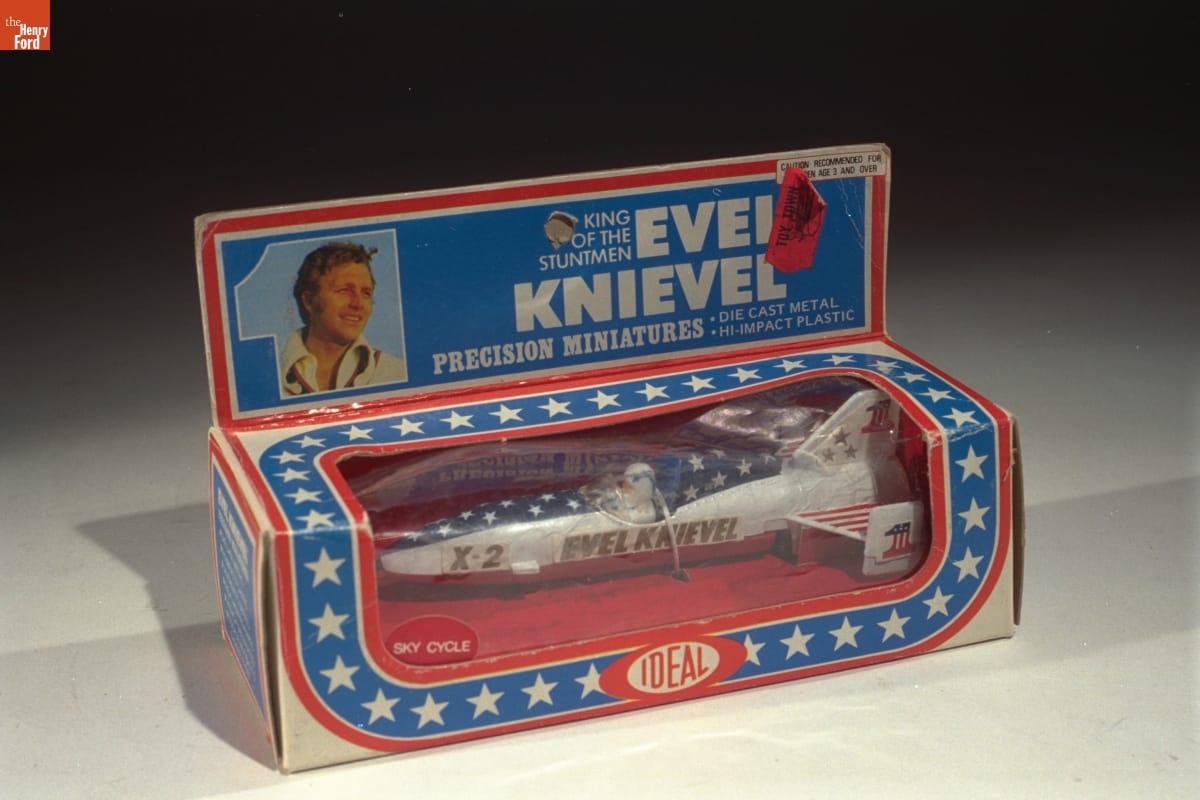 Duke Caboom—"Canada’s Greatest Stuntman”—is not an exact imitation of Evel Knievel, but this “Toy Story 4” character was certainly inspired by the famed 1970s stunt daredevil. Robert Craig Knievel, who was known at an early age for his combined athletic prowess and guts, became a national sensation in the 1970s, when he was featured several times on “ABC’s Wide World of Sports.” Knievel’s tremendous crowd appeal motivated Ideal to reproduce an action-figure version of him along with various stunt-related accessories—like this X-2 Sky Cycle that replicates the one he used during an attempted jump over Snake River Canyon, Idaho, in 1974.

During the peak of his popularity, Knievel’s flashy white leather jumpsuit and reputation for keeping his word helped reinforce his heroic, larger-than-life image. That is, until 1978, when he was convicted of assaulting the author of a book written about him and his popularity quickly plummeted. The tragic backstory of Duke Caboom and his kid who rejected him is a fitting connection to the real-life 1970s Evel Knievel and his young fans. 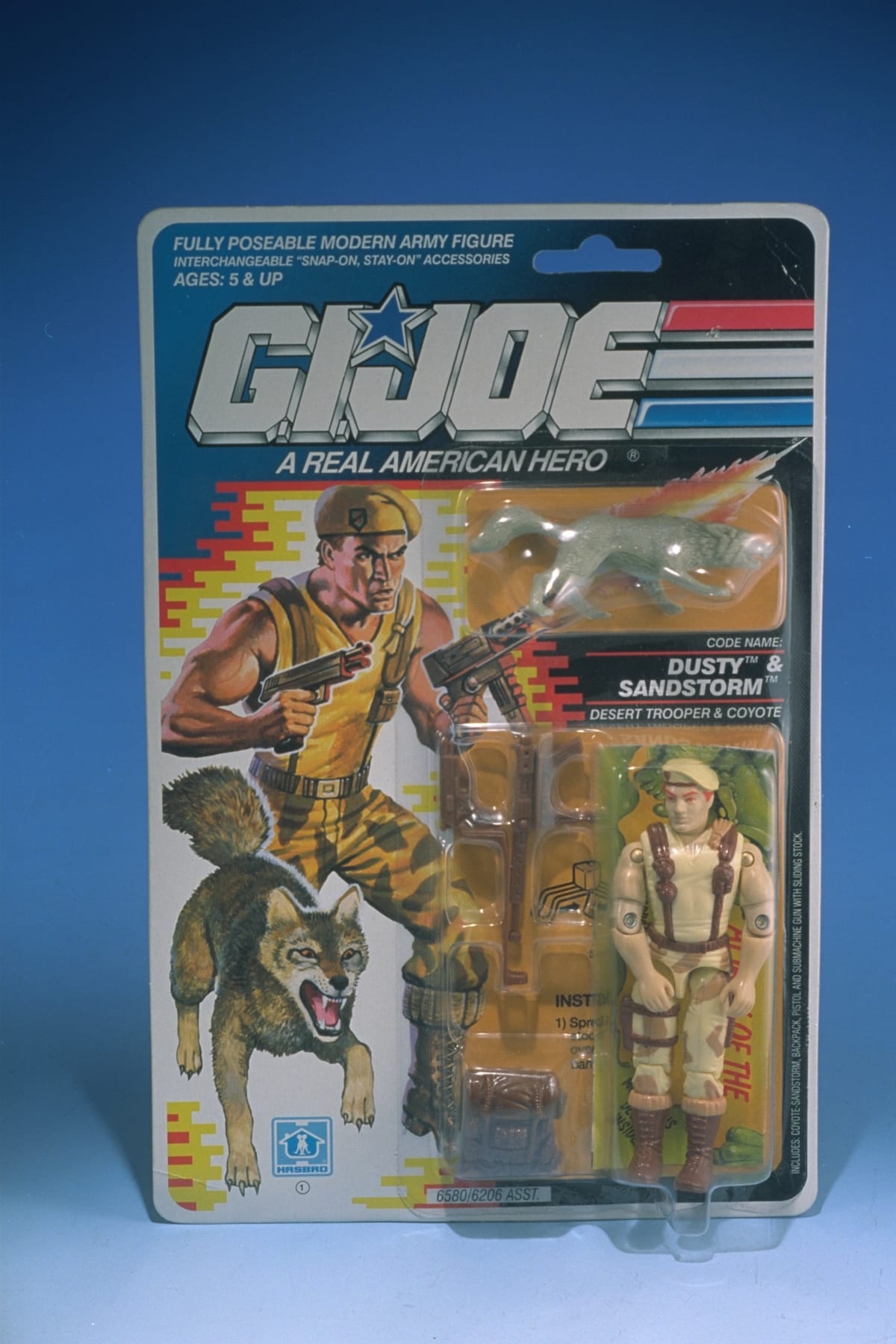 Combat Carl makes a small but unforgettable appearance in “Toy Story 4”—especially if you stay to the very end of the credits. He played a bit part in the first “Toy Story” film, then a larger role in Pixar’s 2013 Halloween TV special, “Toy Story of Terror!”  Combat Carl is an everyman military action figure reminiscent of G.I. Joe action figures of the 1980s and ‘90s.  Mattel introduced the first G.I. Joe in 1964—a 12” poseable version that directly referenced the military men who saw action during World War II and the Korean War. An African-American version of G.I. Joe was introduced in 1965.

As a result of the unpopular Vietnam War in the late 1960s and the rising price of plastic in the 1970s, G.I. Joes declined in popularity until they were discontinued in 1978. But they made a stunning comeback during the 1980s as 3-3/4” adventure-team action figures. This G.I. Joe action figure from The Henry Ford’s collection, named Dusty, was introduced in 1991, after the Persian Gulf War inspired toys based upon the real-life conflict. Exuding a great deal of self-possessed machismo but also tugging at our heartstrings a bit, Combat Carl always leaves us rooting for him. 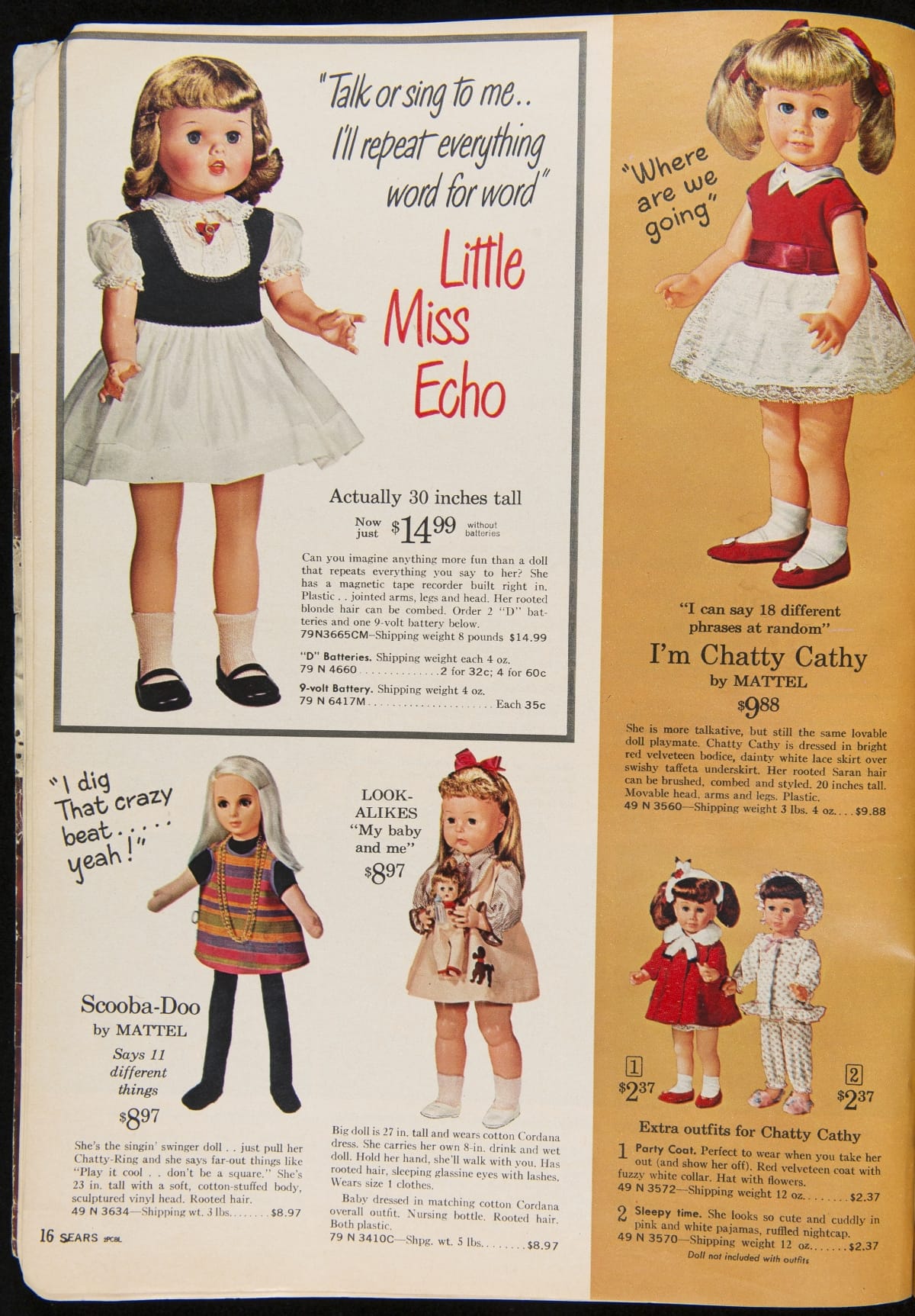 Shown on the right side of the page, Chatty Cathy is featured in the 1964 Sears Roebuck & Co. Christmas Catalog. Note her Gabby Gabby-like freckles! THF287020

At first glance, the scheming Gabby Gabby appears to have been based upon Chatty Cathy, introduced to the American public in 1960 as the first in a new line of Mattel talking dolls. Like Gabby Gabby in the film, Chatty Cathy’s “voice” was activated by a pull string in the back. The first Chatty Cathy, who had blue eyes and sported a blonde bobbed hairdo, recited 11 phrases at random via a record that was driven by a metal coil wound by pulling the toy’s string. Her phrases were voiced by June Foray, also famous as the voice of Rocky the Squirrel in “The Rocky & Bullwinkle Show.” Newer versions of the doll sported a wider choice of hair and eye colors as well as an African-American version. By 1963, when this version of Chatty Cathy was introduced, she had long pigtails and her vocabulary had increased to 18 phrases.

According to director Josh Cooley, Gabby Gabby was based more directly upon an evil doll named Talky Tina, who appeared in a 1963 “Twilight Zone” episode. In this edge-of-your-seats episode, a family’s problems are made worse when a talking doll—which was loosely based upon Chatty Cathy and was also voiced by June Foray—develops a mind of her own and wreaks havoc on the family, inevitably leading to a tragic ending. 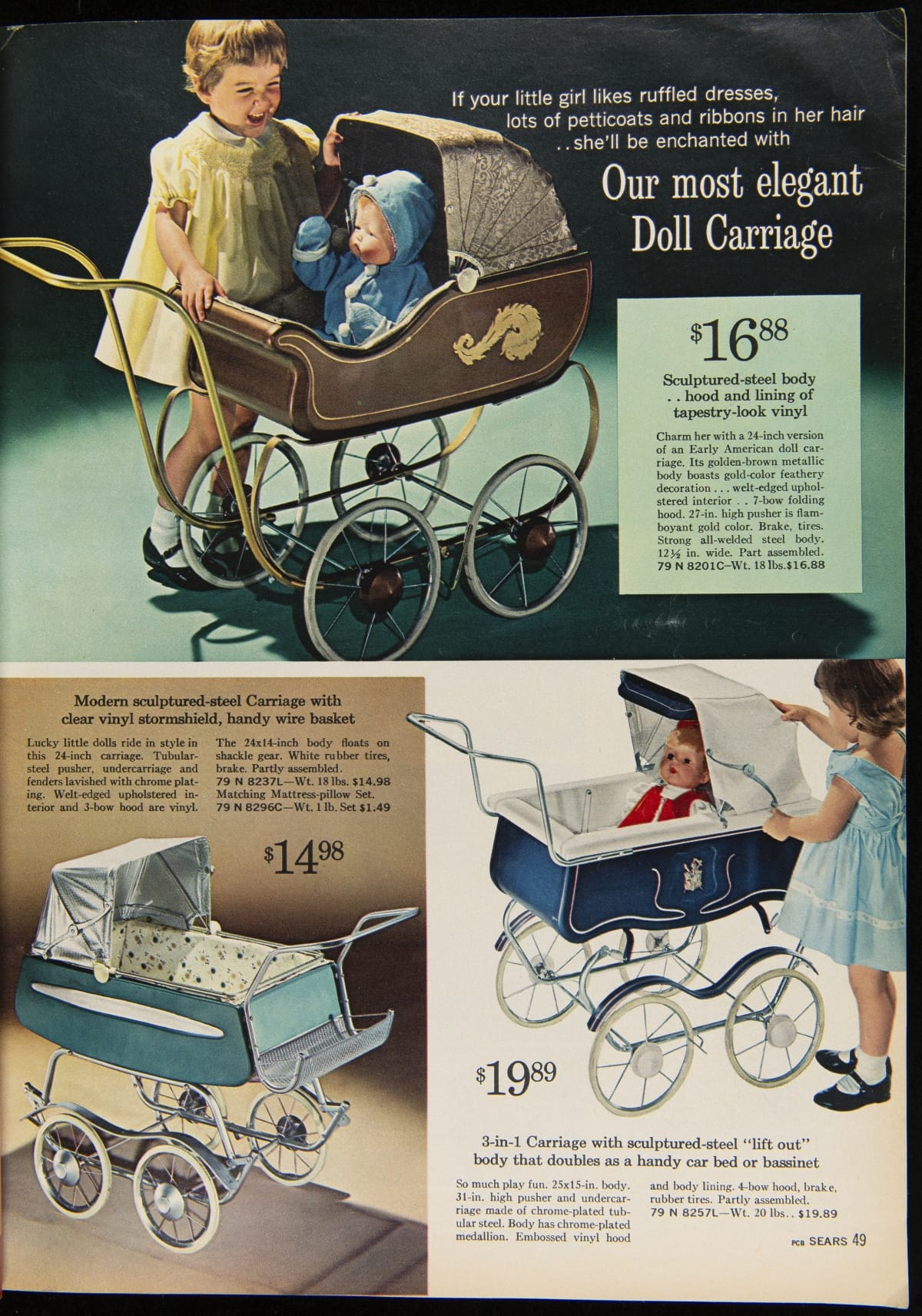 As Woody and Forky search for Bo Peep in the quiet atmosphere of the antique shop, the sudden sound of a squeaky doll carriage edging closer but just out of view is one of the more hair-raising moments in the film.  Sure enough, it reveals itself as Gabby Gabby’s mobility device and there is good reason for viewers to be nervous. Some of us have a visceral memory of those squeaky doll carriages of the mid-20th century, before safety and cost issues replaced the carriages’ metal and vinyl parts with plastic.

Doll carriages were generally based upon full-size baby carriages of their era.  In the late 19th century, these were often quite elaborate, made of wicker with brass fittings and matching parasols and only affordable to the wealthy.  As the 20th century progressed, pop-up tops, removable beds, and suspension systems made baby carriages more comfortable and convenient, and they also became more affordable to families of different economic levels.  The three options shown in this 1964 Sears Roebuck Christmas catalog—of varying prices and materials—are all reminiscent of Gabby Gabby’s squeaky—and sneaky—doll carriage. 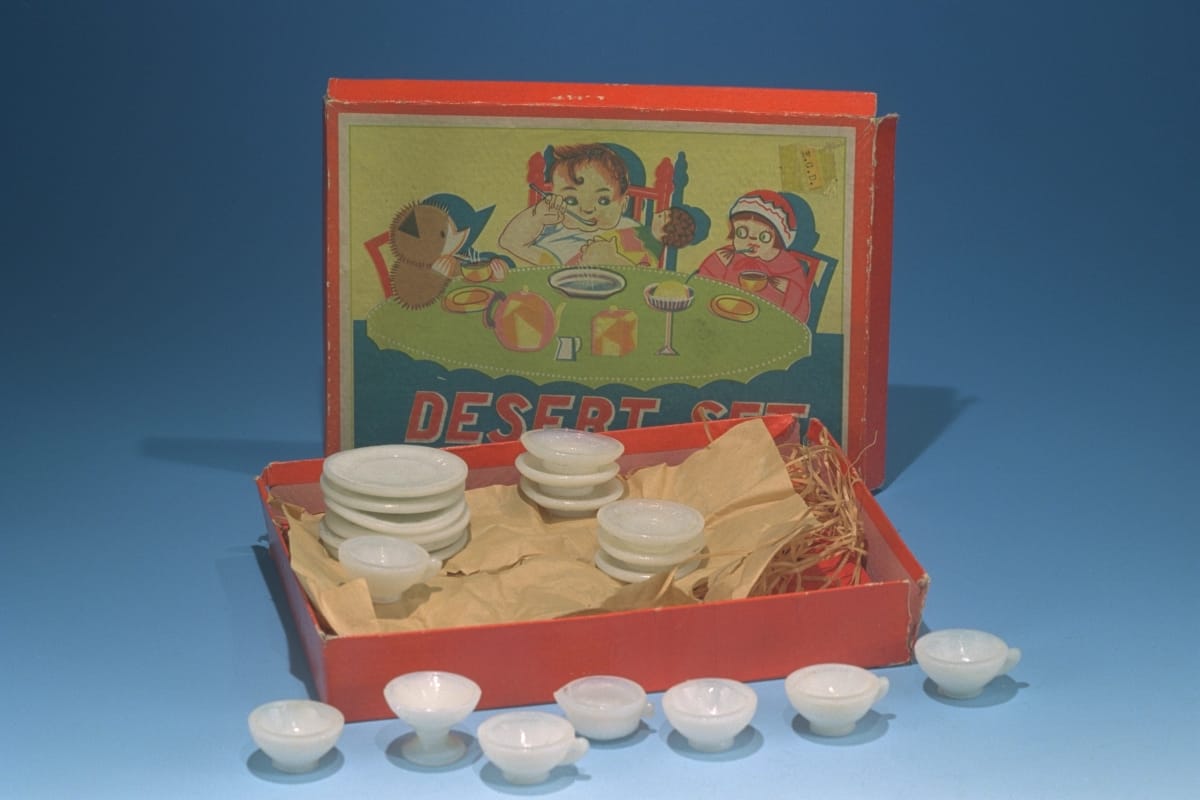 In “Toy Story 4,” Gabby Gabby is delighted when the antique shop owner’s granddaughter, Harmony, sets up a toy tea set and pretends to take tea—hoping beyond hope that when her voice box is fixed, Harmony will invite her to join in.

Since the 19th century, miniature tea sets were a traditional way for little girls to practice adult skills and feminine roles. It was up to them, however, to decide whom to invite for company. Images, like the cover of this doll dessert set, often show little girls having tea with favored dolls and stuffed animals. Indeed, in previous “Toy Story” movies, we saw both neighbor Sid’s little sister and young Bonnie engage in this type of imaginative play. The strengthening of bonds between little girls and their dolls through pretend tea-drinking is something that Gabby Gabby desperately wants—so much so that she will resort to desperate measures to have it. 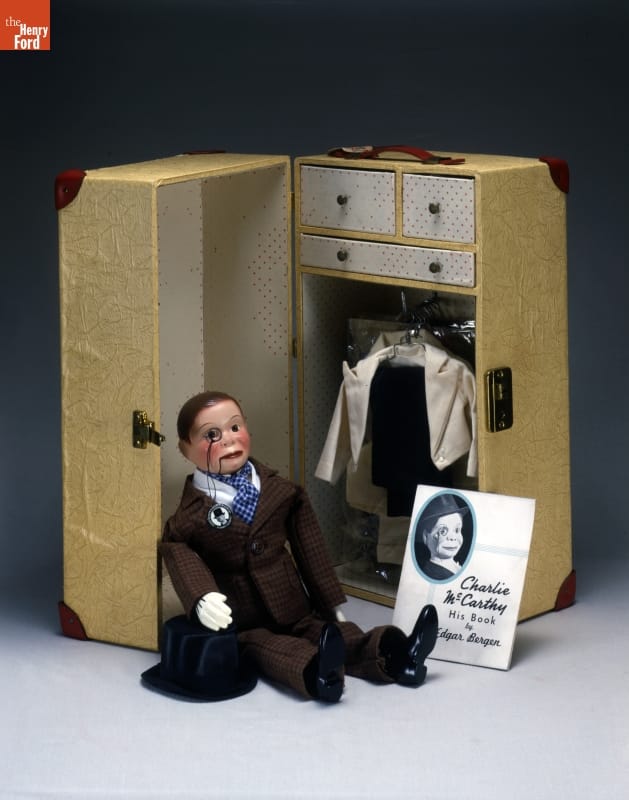 Without a doubt the creepiest characters in “Toy Story 4” are the Bensons—the group of ventriloquist dummies that Gabby Gabby enlists to do her bidding. Dating back to 18th-century traveling fairs, ventriloquists “threw” their voices to appear as if they were coming from elsewhere, usually a puppet or other semi-lifelike figure referred to as a dummy. During the early 20th century, Edgar Bergen popularized the idea of comedic ventriloquism, teaming up with his “cheeky,” boyish dummy, Charlie McCarthy.  Edgar Bergen and Charlie McCarthy became so popular that they appeared on “The Chase & Sanborn Radio Hour” from 1937 to 1956, as well as later films and TV programs. As shown here, Charlie McCarthy was reproduced by Effanbee as a child’s toy, complete with different outfits and a carrying trunk.

The Charlie McCarthy dummy and related doll were not intended to be evil (although some people would maintain that all ventriloquists’ dummies are creepy).  Credit for that goes to the fact that the Bensons were more directly inspired by a series of “Goosebumps” books by R. L. Stine that began in 1993, featuring the villainous Slappy the Dummy. Though the book is from a later era, Slappy’s appearance recalls the ventriloquist dummies of Charlie McCarthy’s time. In “Toy Story 4,” the Bensons have no voices because there are no humans to provide them. And their bodies are soft with no structure because, without humans to operate them, their body parts just dangle.  Very clever!  And definitely creepy!

Will there be a “Toy Story 5”—with new toys, the return of familiar old toys, and a fresh spin on their interconnecting stories? Only time will tell.