The Tale of the Nauga’s Hide 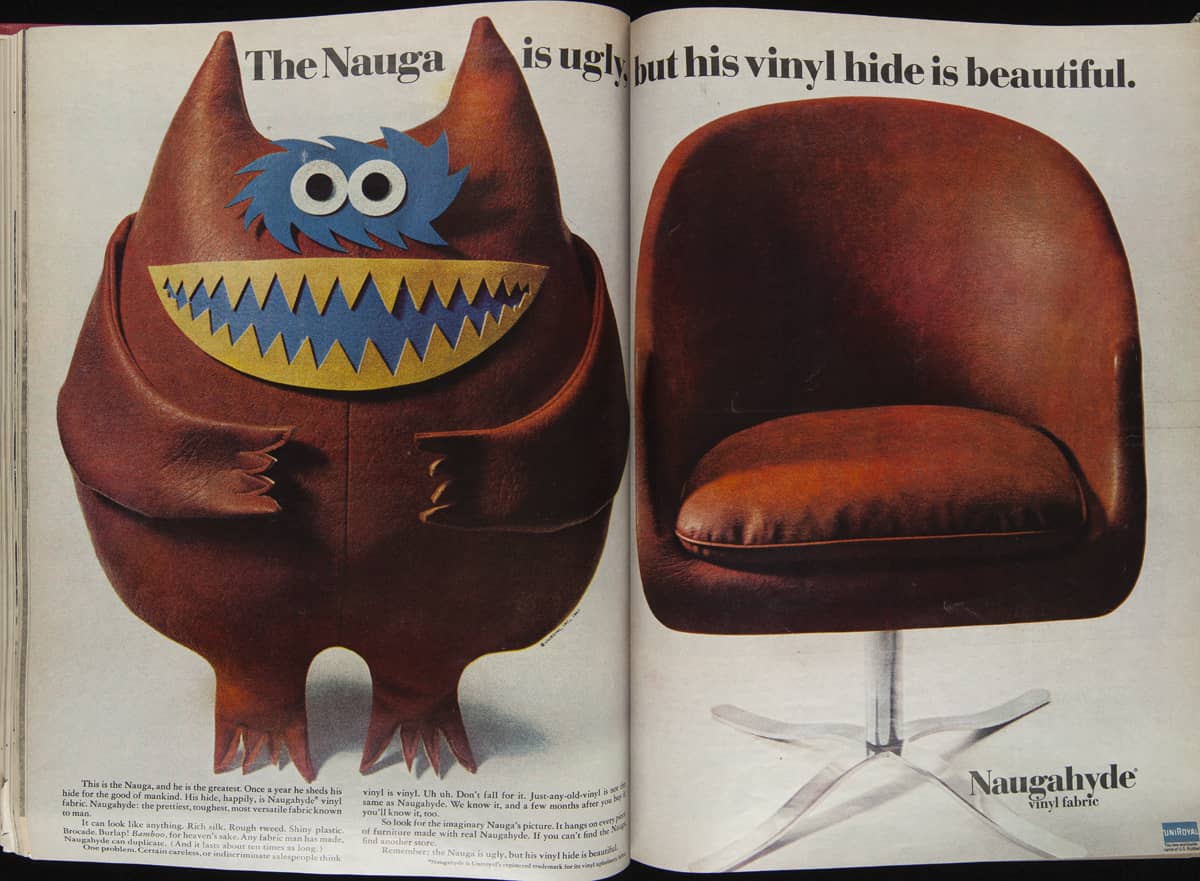 Naugahyde Advertisement in Life Magazine, October-December 1967. This image is not an original photograph and is a combination of two images created for illustrative proposes.

The Nauga, a colorful, horned, happy-looking creature native to the island of Sumatra, was once hunted to near-extinction. They were hunted for sport, but more often for their smooth and durable leather-like hide – Naugahyde, as it’s generally known. However, hunting a Nauga for its hide is quite unnecessary -- they painlessly shed their hide at least once each year for use in furniture, clothing, and more.

You’ve never heard of the Nauga?

All right, you’ve got me. The Nauga is a fictional creature. It was an advertising gimmick created to help Uniroyal Engineered Products promote their soft vinyl-coated fabric that feels like leather but is more durable.  The product, Naugahyde, was used primarily as upholstery in the furniture industry, but also was used for clothing, shoes, accessories and other home goods. Its success spawned many imitators.  In the mid-1960s, Uniroyal hired legendary ad-man George Lois and designer Kurt Weihs to craft an advertising campaign to differentiate their product from the competition. And what did Lois and Weihs create? The Nauga.

A humorous ad campaign featured the Nauga engaged with the world – as the life of the party, as a child’s play companion, adorned in splattered paint from a craft went awry, even as a vacationer readying for travel with golf clubs in hand. These advertisements emphasized the suitability of Naugahyde upholstery for all areas of life, claiming it could be indistinguishable from other fabrics like leather, tweed, or silk -- but “last about ten times as long.” An image of the Nauga found its way onto hang-tags that accompanied all genuine Naugahyde products. Many of the ad campaigns ended with this directive: “If you can’t find the Nauga, find another store.” 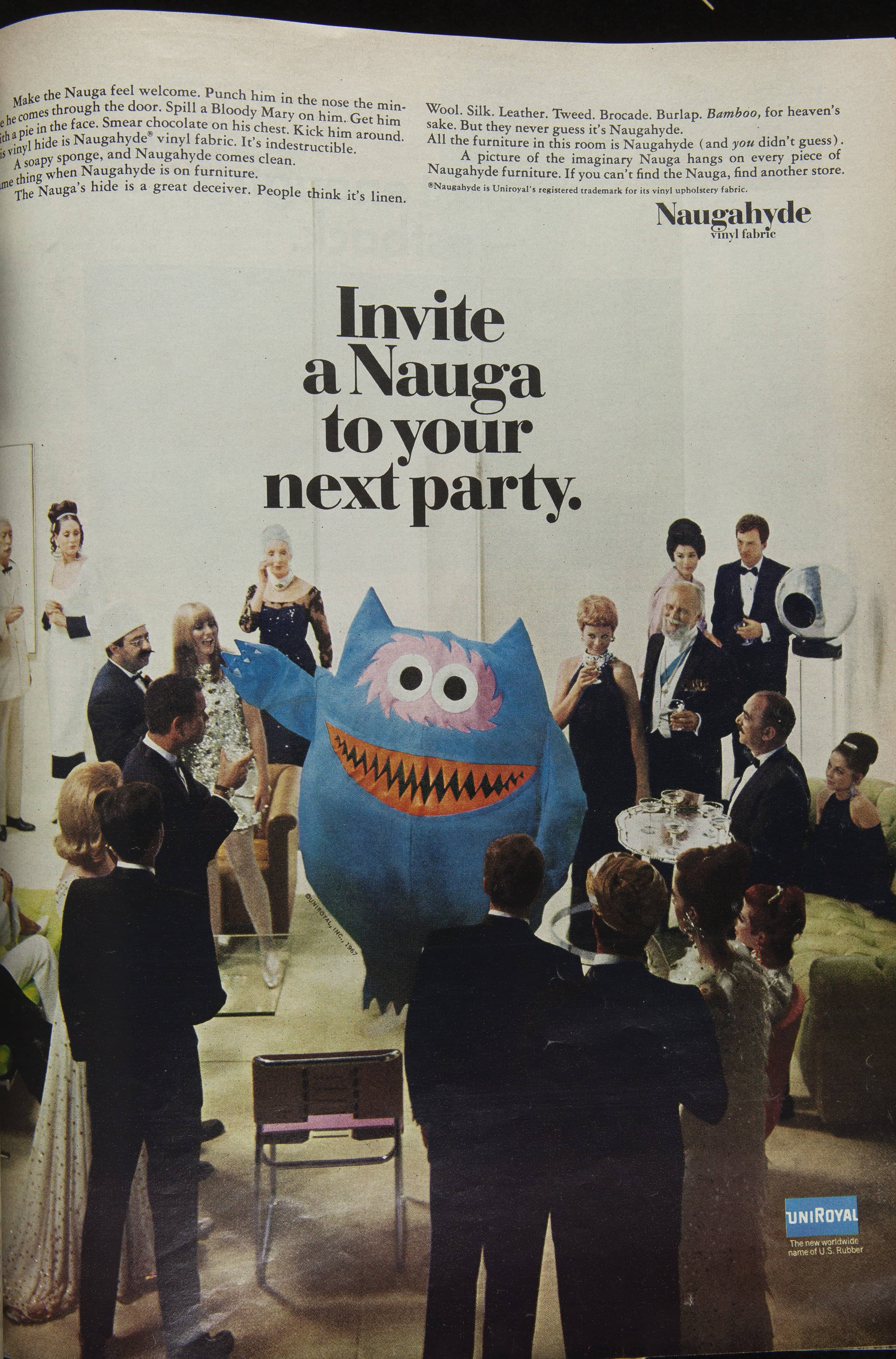 The advertising worked – at least in that it caused excitement over the mysterious Nauga creature.  Allegedly, some people even believed Naugas were real creatures and became concerned about inhumane treatment as the use of Naugahyde boomed in the late 1960s. A New York comic, Al Rosenberg, invented a fictional character named Earl C. Watkins who spearheaded the “Save the Nauga” project to protect the species from extinction, adding that a “herd of Naugas is often mistaken for a roomful of furniture.'' The Nauga even made an appearance on The Tonight Show with Johnny Carson. Nauga dolls, like this one in The Henry Ford’s collection, were also produced to promote the brand. In fact, if you visit the Naugahyde website today, you can still “Adopt a Nauga,” which, according to the company’s webpage, are bred on a ranch outside Uniroyal’s headquarters in Stoughton, Wisconsin. 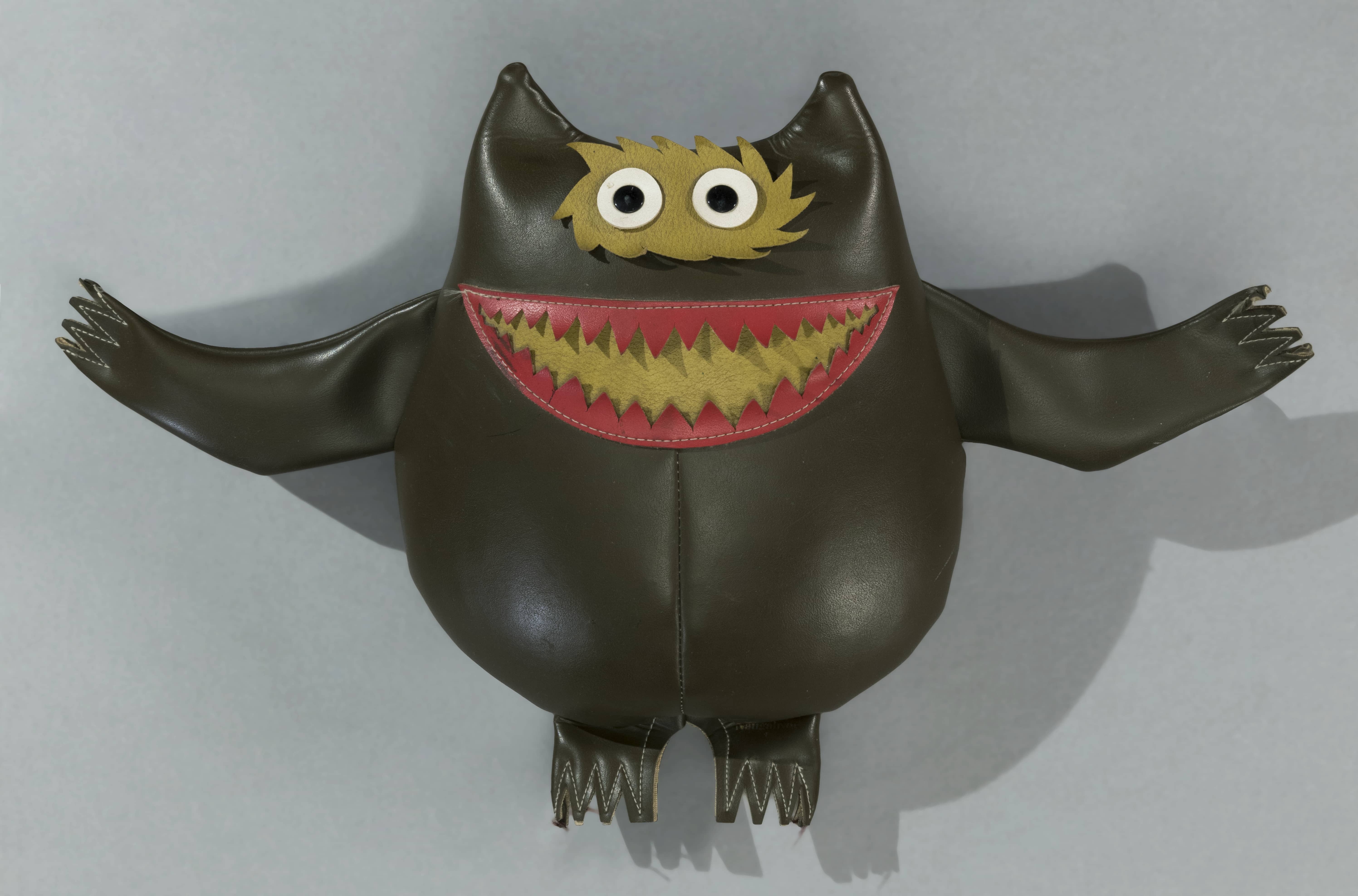 It isn’t unusual for companies to go to great lengths to endear a product to the public. These efforts have often yielded highly creative and memorable results, like Oscar Mayer’s Wienermobile, the Heinz pickle charms and pins, or the Pets.com Sock Puppet, to name a few. While the Nauga creature has faded nearly into obscurity, the leather-like product it represents lives on…perhaps even as the upholstery of the chair you’re currently sitting on.

Katherine White, Associate Curator, Digital Content, at The Henry Ford, recently adopted a Nauga doll of her very own.