Uncovering Medical Innovations in the Collections

Although medical history is not currently a focus of The Henry Ford’s collections, we do have numerous medical artifacts because they relate in some way to a different area of our collections, such as public life, transportation, buildings and architecture, or design. New Associate Curators of Digital Content, Katherine White and Ryan Jelso, combed through The Henry Ford’s collection looking for artifacts that were medically innovative, either as physical innovations or as representations of innovations in the medical profession. The objects they found were initially acquired for their relation to a different collections area, but they tie closely to the development of today's medical technologies and practices. 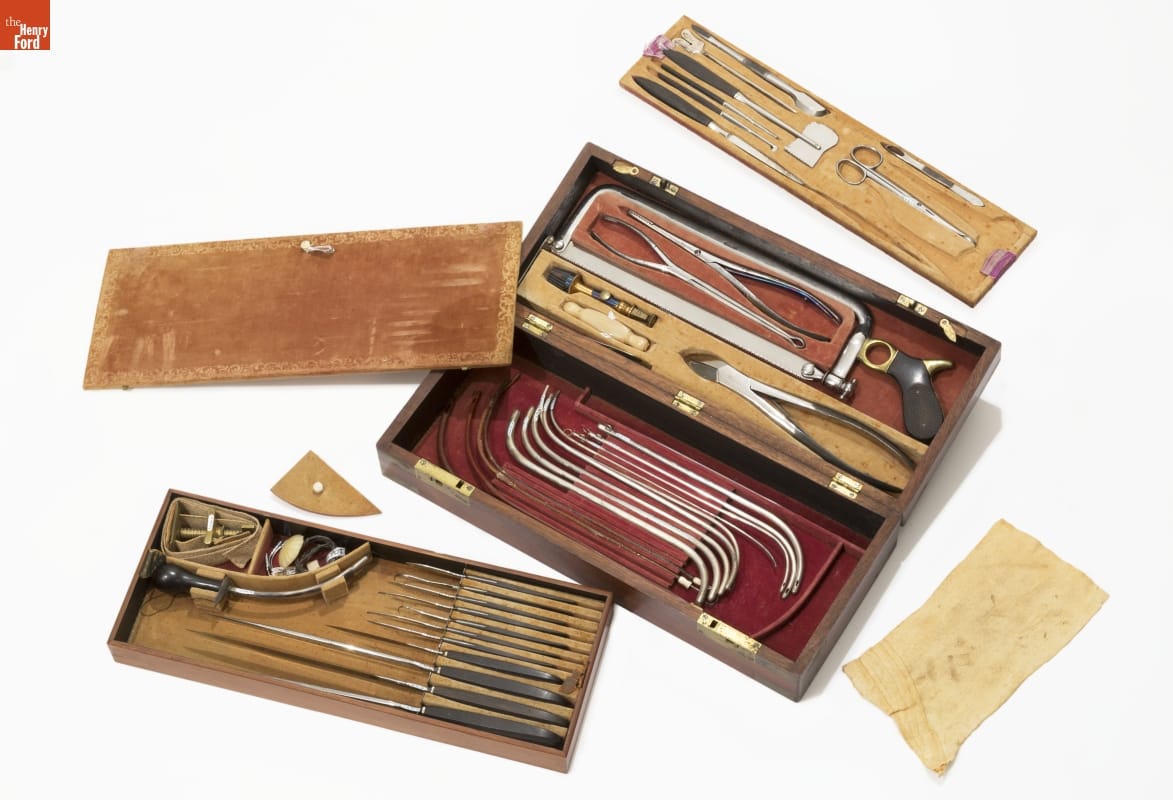 A Civil War surgeon used this government-issued Field Operating Kit, initially acquired by The Henry Ford as a public history artifact, at the Battle of Chancellorsville in May of 1863. It contains all the tools needed to perform the most common Civil War medical procedure – amputation.

New Weapons Technology Leads to New Surgical Techniques
In 1849, French military officer Claude-Etienne Minié invented a hollow-based cylindrical bullet, which was more accurate over long distances than its predecessors and more quickly loaded into a rifle barrel due to its slightly smaller size. The minié bullet provided a significant advantage to those on the offensive; however, the bullet was immensely destructive to those on the defensive. Due to its hollow nature, the projectile became misshapen upon impact and its ragged edges caused significantly more internal damage than the solid bullets used previously.

Both the Union and Confederate Armies utilized the minié bullet extensively during the American Civil War. The damages wrought by this particular bullet surely contributed to the war’s astronomical death count, but also contributed to the advancement of amputation surgery. While amputation had been used throughout the ages, Civil War surgeons innovated numerous surgical advancements. Immediate amputation of an injured limb before infection spread to healthy tissue became standard and drastically decreased battlefield mortality rates. 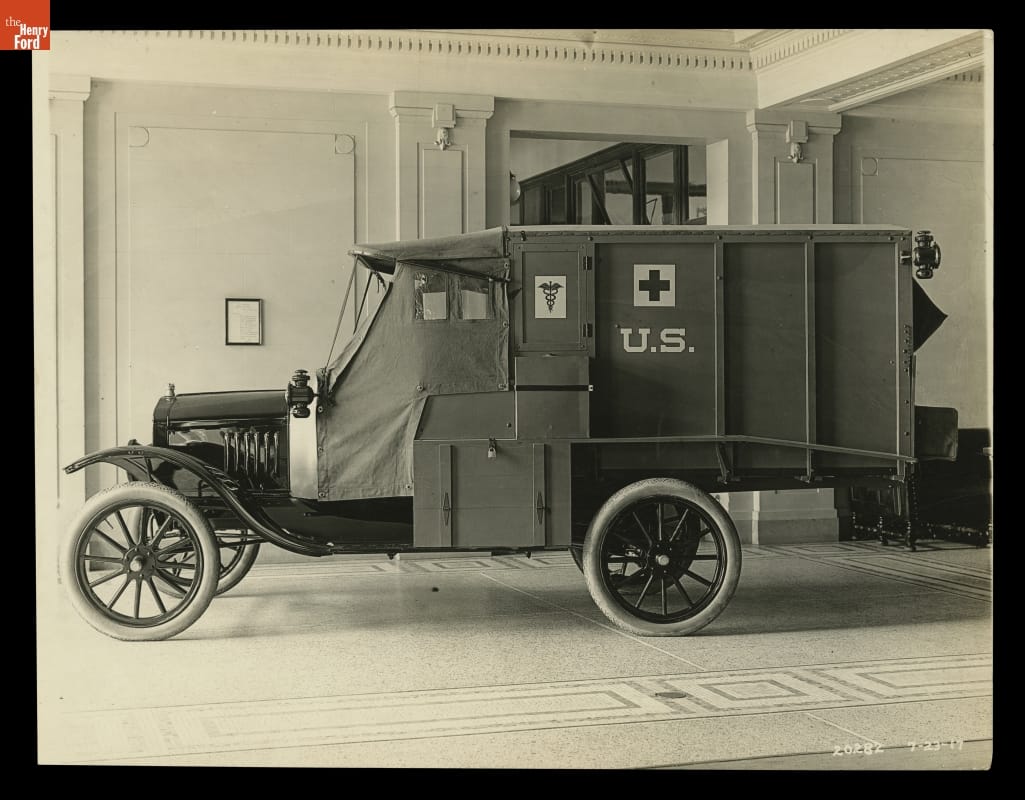 The Henry Ford's broad transportation collection covers the motorization of ambulances during World War I. Take a look at a few archival photographs that document the Model T's role in this important part of ambulance history, here.

The Motorization of Medical Care
The Industrial Revolution of the 18th and 19th centuries spurred technological innovations that would change how wars were conducted in the decades to come. By the beginning of World War I in the early 20th century, military units had become increasingly motorized, replacing the horses and wagons of past wars. Armies employed mechanized military vehicles like tanks, airplanes and submarines along with new forms of chemical warfare to inflict mass casualties during what became known as "The Great War." With a surge in casualties, quick transportation of the wounded away from the battlefronts to safer hospitals became a life-saving priority. To meet this need, volunteer services and individual armies experimented with and developed motor ambulance corps, eventually making them commonplace.

The torn up roads, heavily shelled areas, and muddy terrain of the war-torn European continent made lighter vehicles preferable. While other makes and models were present, lightweight Ford Model Ts made up a large percentage of the ambulances in service during World War I. The vehicles’ ability to traverse the war environment along with their easy maneuverability made them popular among ambulance drivers. Other advantages of Model T ambulances included their low cost, economical fuel usage, and ease of operation for the average solider or volunteer. The standardization of Model T parts also meant that maintenance for these ambulances could be performed readily, extending each vehicle's service life and allowing medical professionals to tend to the wounded quicker than ever before. 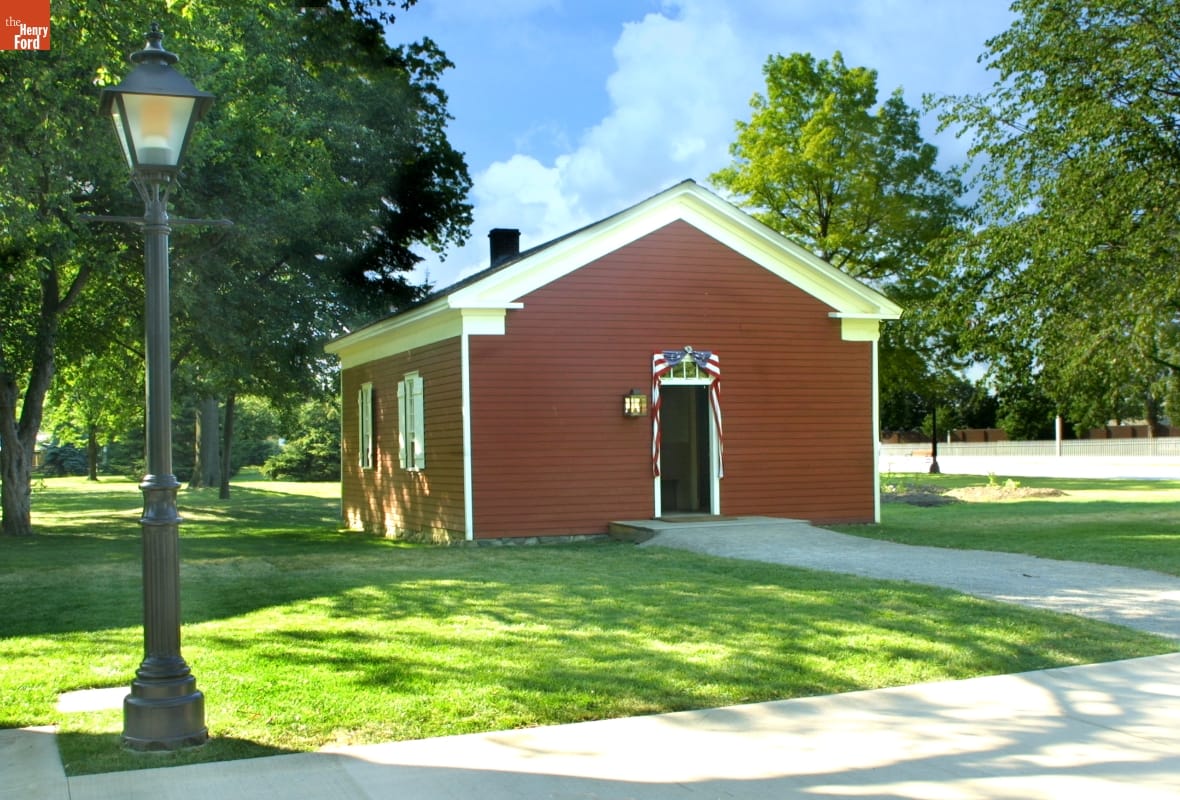 As a part of the historic building collection in Greenfield Village at The Henry Ford, Doc Howard's office serves as an example of the 19th century origins from which modern American medicine would evolve.

A Snapshot of Mid-19th Century Medicine
Representative of a typical early rural doctor's office, this mid-19th century building is where Dr. Alonson Bingley Howard (1823-1883) practiced an eclectic combination of conventional, botanical, and homeopathic medicine. Born in New York, Howard moved to Tekonsha, Michigan, and began his career as a farmer, eventually deciding that he wanted to become a physician. He first attended Cleveland Medical College from 1850-1851, later entering the University of Michigan's School of Medicine, where he took classes from 1851-1852. Although medical school records list him as a non-graduate, Howard moved back to Tekonsha and went on to practice medicine until his death in 1883.

In the 19th century, medical professionals had a limited understanding of illnesses and often relied on bloodletting or other purging methods to "balance" the body and keep diseases at bay. Along with minor surgery, these common practices were available to Dr. Howard as he traveled across his community attending to pregnancies, chronic diseases, tuberculosis, dental problems, and various wounds. To aid him in treating his patients, he relied on the early pharmaceutical medicines that could be found on the market during this period. However, he also kept a laboratory in his office where he could experiment with developing his own medicines through a wide personal stock of plants and minerals. 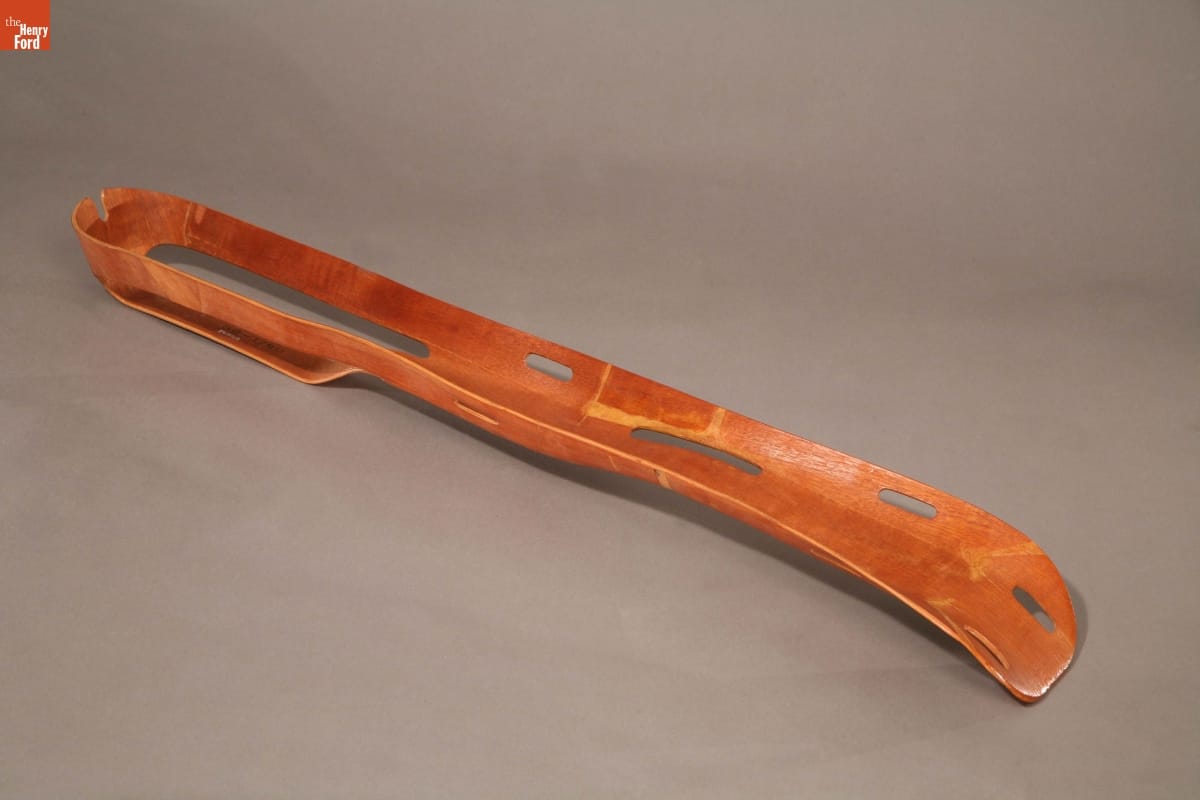 The Henry Ford obtained this Eames Molded Plywood Leg Splint as a design history artifact. It can be found in design museums throughout the world and is included in The Henry Ford Museum’s “Fully Furnished” exhibit.

Experimentation with Plywood Provides Medical Solution
The Museum of Modern Art held a design competition in 1940 entitled Organic Design in Home Furnishings, which aimed to spur development of modern furniture that adequately addressed the era’s changing way of life. Charles Eames and Eero Saarinen, friends and peers at Michigan’s Cranbrook Academy of Art, entered multiple molded plywood chair designs into the competition and won two of the six categories. At the time, molding or bending plywood was still a quite progressive process and molded plywood was not yet commonly used in mass-produced goods for the public. Along with his wife, Ray, Charles Eames continued experimentation with molded plywood after the competition.

America’s entry into World War II brought shortages of many materials, including metal. Splints for broken limbs had historically been produced of metal, although metal splints were not ideal for military use due to their weight and inflexibility. Charles and Ray Eames, perpetual problem-solvers, designed a lightweight, strong, and flexible leg splint produced through their innovative method of molding plywood. The Eames molded leg splint became a highly effective solution for the military as well as a highly sculptural design object. 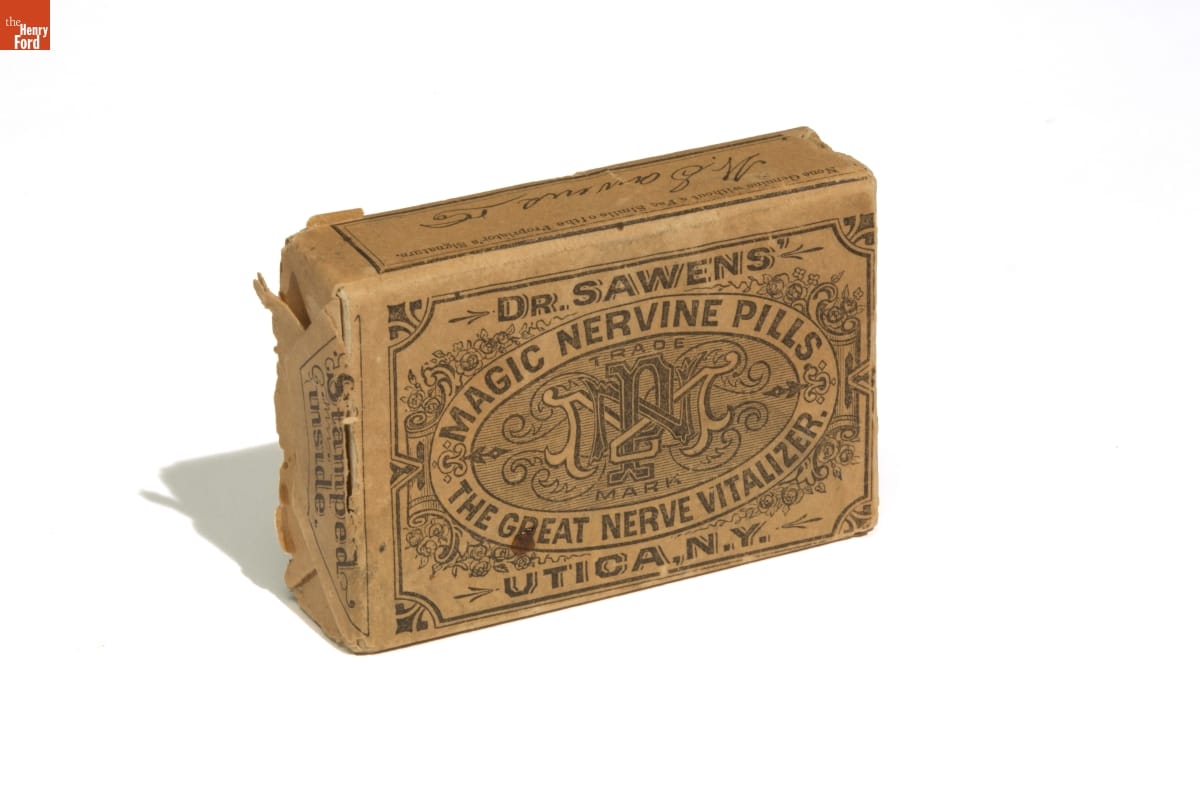 Consumerism Helps Standardize Early Medicines
In the late 19th century, an increasing body of medical knowledge had begun to revolutionize the practice of medicine. However, a lack of scientific understanding of early medical drugs meant that drugs used in treatment were often inadequate and could even exacerbate illnesses. At a time when disease was still widespread, Americans sought cures for any number of maladies and tried nearly anything to get relief. Entrepreneurs took advantage, using advertising to make claims and promise cures with manufactured patent medicines. Such patent medicines rose to popularity in the last quarter of the 19th century, but the industry was unregulated and manufacturers were secretive about their recipes.

Some of these concoctions contained harmful ingredients or ingredients used in unsafe quantities. Cocaine, alcohol, opium, and heroin were some of the common ingredients that could be found in early patent medicines. These examples, as well as other additives, could result in addiction or even death, prompting national legislation that prohibited misleading health claims and required manufacturers to list their product's contents. In the United States, the Pure Food and Drug Act of 1906 helped stop the manufacture of drugs and products considered poisonous, adulterated or mislabeled.

Some of the patent medicines in our collection were analyzed in 2013 through a partnership between The Henry Ford's conservation staff and the Chemistry & Biochemistry Department at University of Detroit Mercy. Their findings, as well as more information on patent medicines can be found here in our Digital Collections.

By Katherine White and Ryan Jelso, Associate Curators, Digital Content, at The Henry Ford. This post was made possible in part by our partners at Beaumont. Beaumont is a leading high-value health care network focused on extraordinary outcomes through education, innovation and compassion. For the latest health and wellness news, visit beaumont.org/health-wellness.