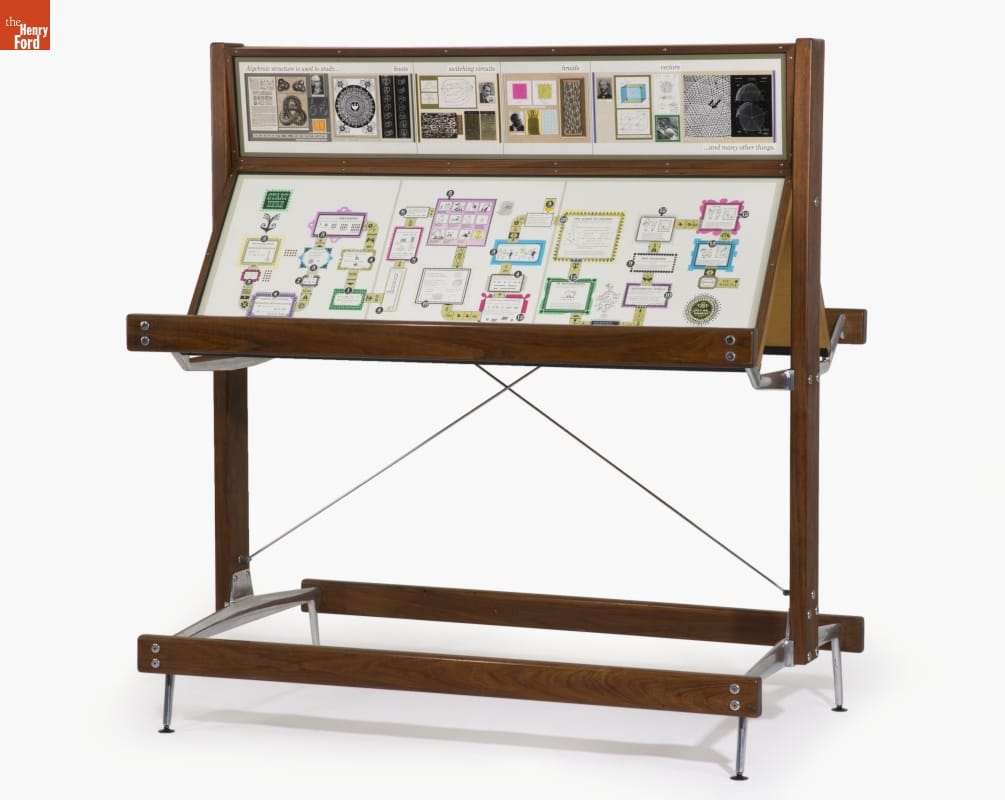 In the early 1960s, designers Charles and Ray Eames set out to reveal the wonder they saw in math through an engaging and interactive exhibit they called Mathematica: A World of Numbers … and Beyond. The designers, perhaps best known for the iconic Eames lounge chair, used models and demonstrations to bring to life concepts such as probability, geometry, the Moebius strip, and more.

In 2015, The Henry Ford acquired an original Mathematica exhibit, and is currently working to restore the interactive components before installing the exhibit on the Museum floor in 2017. We’ve begun to digitize some of the signage and reading material from the exhibit, including this reading stand that discusses, among other things, the “Man Machine Interface.”

Visit our Digital Collections to view zoomable detail shots, or to see the other Mathematica signage digitized so far.

Earlier this year in June, The Henry Ford acquired an original kiosk designed by Charles and Ray Eames for use in the IBM Pavilion at the 1964 New York World’s Fair. The kiosk, one of two known to survive, was designed to resemble a colorful tent-like structure, complete with pennants.

Constructed of iron, walnut and plastic laminate, it originally housed interactive exhibit elements that were part of a huge program created by the Eames office to explain the impact and uses of IBM’s computing technology. The kiosk was saved by the contractor who had been awarded the task of demolishing the pavilion at the fair’s end. Another example is known to have survived—used by the Eames Office to explore installation options but never used at the fair itself. It was acquired by Vitra in 2006.

The kiosk is currently with our conservation department being conserved and will be coming to the floor of Henry Ford Museum next year.

To get an idea of how the kiosks were used in the IBM Pavilion, take a look at this video from Eames Office. You'll miss it if you blink, but you can catch a very small glimpse of our kiosk at the 1:45 mark in the right corner of the video.

Make sure to check back to the blog and our Facebook page for kiosk updates.

Ray Eames: One part of a design team legend

Design lovers have been celebrating the 100th birthday of Ray Eames, one half of the renowned Eames design duo, the past few days, bringing her role into the spotlight once again.

Ray and Charles rose to prominence in an era and an industry where men stood out with their achievements, often ignoring the accomplishments of their female counterparts. However, Charles always found a way to include Ray and highlight her work. At the end of the day, Ray was crucial to all components of Eames.

Ray was trained as a painter and sculptor. She loved pattern and design - her office at 901 Washington Boulevard was filled with drawers of colorful papers as inspiration for the next project. Every design element was purposeful for Ray. Whether it be a fabric selection for a chair or the flower arrangements she placed on her own dining room table at home, every choice had been scrutinized. Ray didn't do things just to do them - she did it as part of a grander vision.

Attention to detail was just one of Ray's well-known traits and was a critical element within their work. You see that with every piece of furniture they created. When you evaluate their portfolio over time, each model was better than the previous as the two tried to find just the right combination of materials in the finished products to make it, finally, perfect by their standards.

As such a detail-oriented person, Ray's work was her life and her life was her work. Both she and Charles weren't the types of people to use "free time" to watch television or "hang out." Free time was time to start the next project or research new inspiration.

It's impossible to fully disentangle Charles' and Ray's contributions to the overall Eames design achievement. Theirs was a creative partnership so completely entwined that teasing it apart only muddies their legacy.

The artistic approach of Ray Eames

The following post was originally posted on Herman Miller's Discover blog on Dec. 13, 2012. We're pleased to share this story here on The Henry Ford's blog. Many thanks to our friends at Herman Miller for their permission to post this for our readers to enjoy. - Lish Dorset

In a 1980 interview with Ruth Bowman for the Archives of American Art, Ray responded to a question about her chosen vocation:

“I never thought of myself as an artist and couldn’t bear the word.”

She objected to the generality of the label, but her comments about her interdisciplinary approach to art and design provide an intriguing contrast:

Of Ray’s many artistic pursuits—painting, film, textiles, fashion, and furniture design—perhaps the most personal was her proclivity for making interesting arrangements with found objects. Of her curious habit, she said:

“Almost everything that was ever collected was an example of some facet of design and form. We never collected anything as just collectors, but because something was inherent in the piece that made it seem like a good idea to be looking at it. “

It’s always a good idea to revisit the work of Charles and Ray Eames, especially in light of the 100th anniversary of Ray’s birth on Saturday, Dec. 15, 2012. We celebrate Ray’s life and work as a painter, collector, and designer.

In Honor of Ray Eames

This Saturday, Dec. 15, marks what would have been artist and designer Ray Eames' 100th birthday. Design is an important topic at The Henry Ford, so over the next few days we're pleased to share a few posts dedicated to Ray's spirit and contribution to the Eames design name.

Posting with us today is Cheryl Oz of Cheryl Oz Designs, a metro Detroit illustrator and designer. Cheryl is a past Maker Faire Detroit participant and recipient of an Editor's Choice Award. - Lish Dorset

I studied design and advertising at the College for Creative Studies. During an art history class, I was introduced to the work of Charles and Ray Eames and from that point on I never looked at art and design the same way again.

At the time I knew very little about the designers, so what I loved the most was what I saw in their work. I loved the clean lines, color choices and movement in their pieces. Their furniture was so different from the furniture I grew up with in my family's home.

From that point on I feel like my work has been influenced by the Eames aesthetics. It wasn't until years later when I decided to start focusing more on illustration, that I then remembered how inspired I was by the Eames duo and imagined others most likely were, too.

I have always been inspired by everyday things. I loved the notion that when the first Eames chair was in the production process, it was meant to be a mass-produced, affordable chair that anyone could own. I like to think of my artwork in the same manner. I feel that everyone should be able to afford art that they love for their home. Surely, I thought there were other people that felt the same way that I do, and still wanted a bit of Eames in their home, so I started painting a few of my favorite pieces of their furniture.

Besides being a painter, Ray was the woman behind the scenes who gave insightful input to her husband Charles, who appreciated her talents and held her opinions in high regard. Her input was almost unheard of for a woman of her time. She had an incredible sense of color and with Charles, they both led a colorful life in their amazing world of art and design.