Join us for an exclusive, members-only preview of Star Trek: Exploring New Worlds at Henry Ford Museum of American Innovation.

Set a course for Henry Ford Museum of American Innovation to experience Star Trek: Exploring New Worlds, a fully immersive, limited-engagement exhibition. Navigate through more than 100 rare artifacts and props, including the original U.S.S. Enterprise navigation console. Beam yourself into the action to re-create memorable scenes with the transporter simulator and the KHAAAN! scream booth.

Star Trek’s themes of optimism, equality, heroism and examination of the human condition have inspired people worldwide to imagine, explore and create for over 50 years. Investigate 22nd- to- 24th-century tricorders and phasers, a Borg cube, starship filming models and more. Get up close to rare costumes, including the Spock tunic worn by Leonard Nimoy, Geordi La Forge’s visor and Seven of Nine’s unitard.

Discover how this pop culture powerhouse grew from a low-budget sci-fi television series to prosper as an iconic franchise, building stories around controversial issues such as war, racism and politics. Uncover the artifacts of a potential future that continue to impact our culture — from arts and technology to fashion and literature — and inspire generations to innovate and push boundaries to the final frontier and beyond.

Find out how to support a national treasure and be part of one of the world’s largest communities of change-makers here. 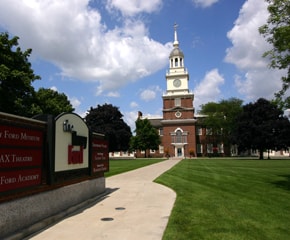 Support The Henry Ford Support the leader in the preservation and presentation of American innovation. Learn More