A Flurry of Christmas Greetings: The Postcard Craze 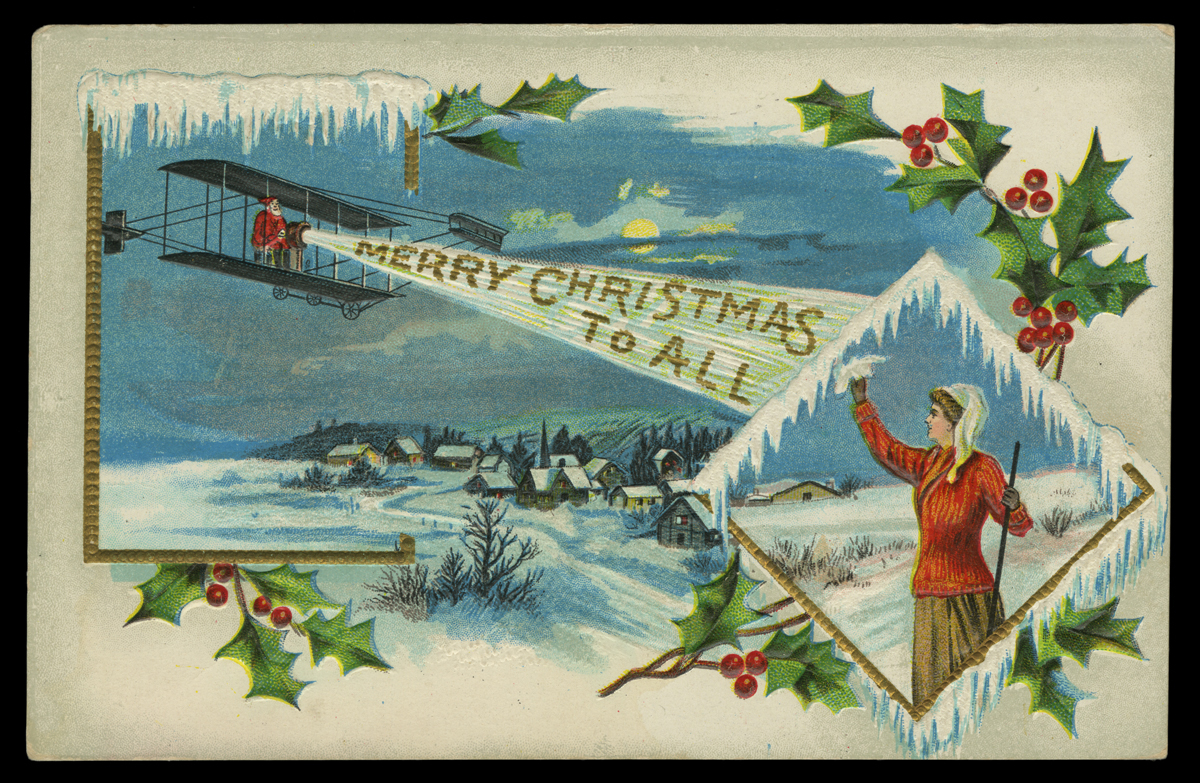 Santa Claus employs the latest in transportation technology to share his greetings in this Christmas postcard, 1910. / THF93052

During the first two decades of the 20th century, people were likely to find colorful Christmas postcards when they reached into their mailboxes as the holiday neared. Americans were experiencing a postcard craze! 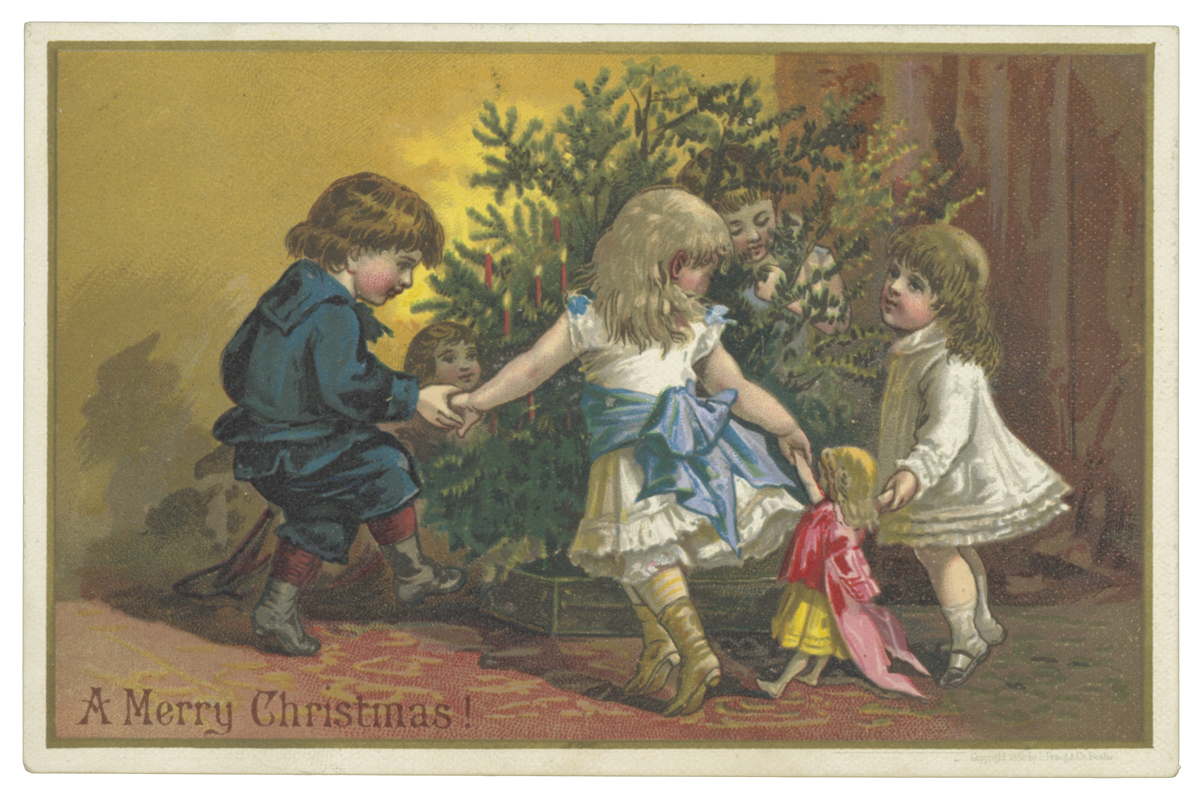 It’s not that people didn’t send Christmas cards before that time. They did, especially during the 1870s and 1880s as Christmas became more widely celebrated in homes and in the community. Sending a Christmas greeting card was a way to keep in touch with distant family and friends. In the decades following the Civil War, as Congress increasingly standardized delivery, mail traveled more rapidly, dependably, and cheaply than it had before, transporting Christmas cards and other mail throughout the nation. Yet interest in giving or sending printed holiday greetings through the mail had waned somewhat by the 1890s. That is, until circumstances—lower postal rates and improved delivery service to all areas of the country—helped create a postcard boom for urban and rural residents alike and encouraged a Christmas card revival.

n 1898, the United States Post Office reduced the cost of mailing privately printed postcards to one cent. As postcards caught the public’s fancy in the first decade of the 20th century, these cards blossomed with colorful images, humorous messages, or holiday greetings. Postcards quickly became an attractive and ready means of inexpensive communication, with room for a personal message on the reverse.

During the “Golden Age” of postcards, from about 1900 to 1914, people bought and mailed billions. In 1904, the New York City post office alone handled about 30,000 cards per day. Many of these billions of postcards were holiday-themed—Christmas postcards were the most popular. By 1902, rural mail routes had become a permanent part of the postal service. Instead of having to make a trip into town to the post office to retrieve their mail, rural residents now had the same advantage as city dwellers—mail was delivered directly to their homes. 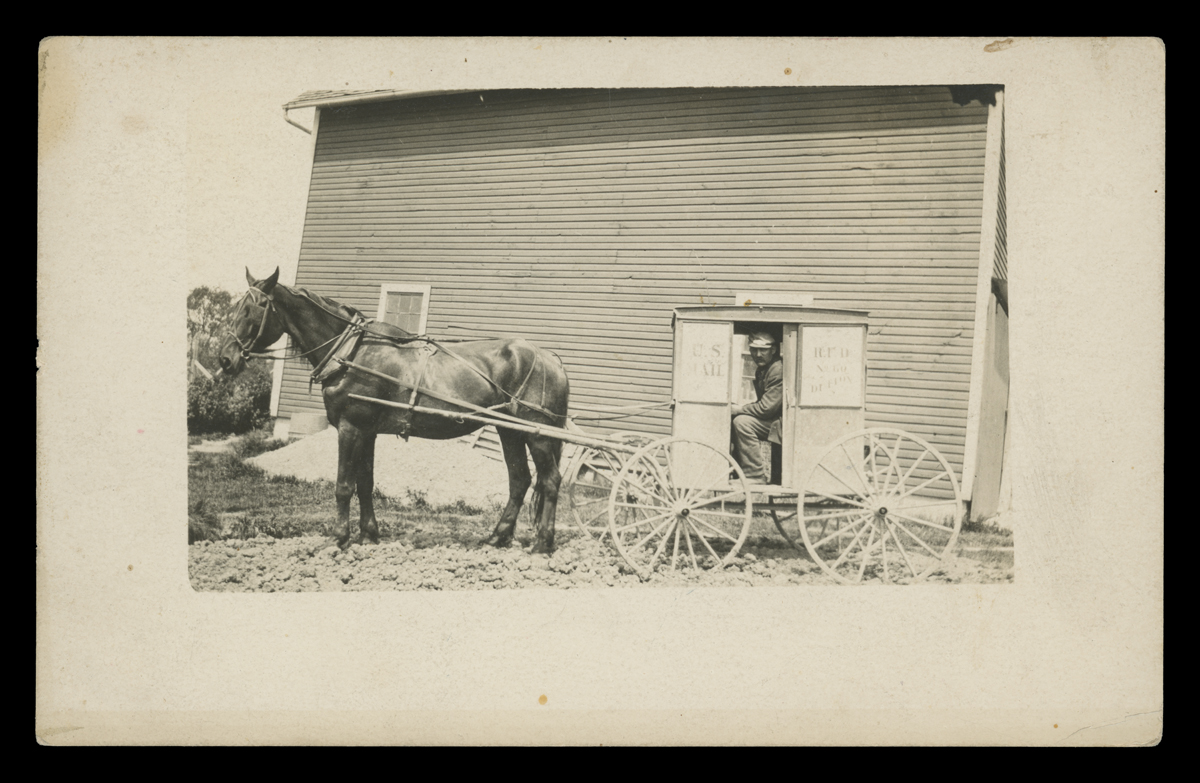 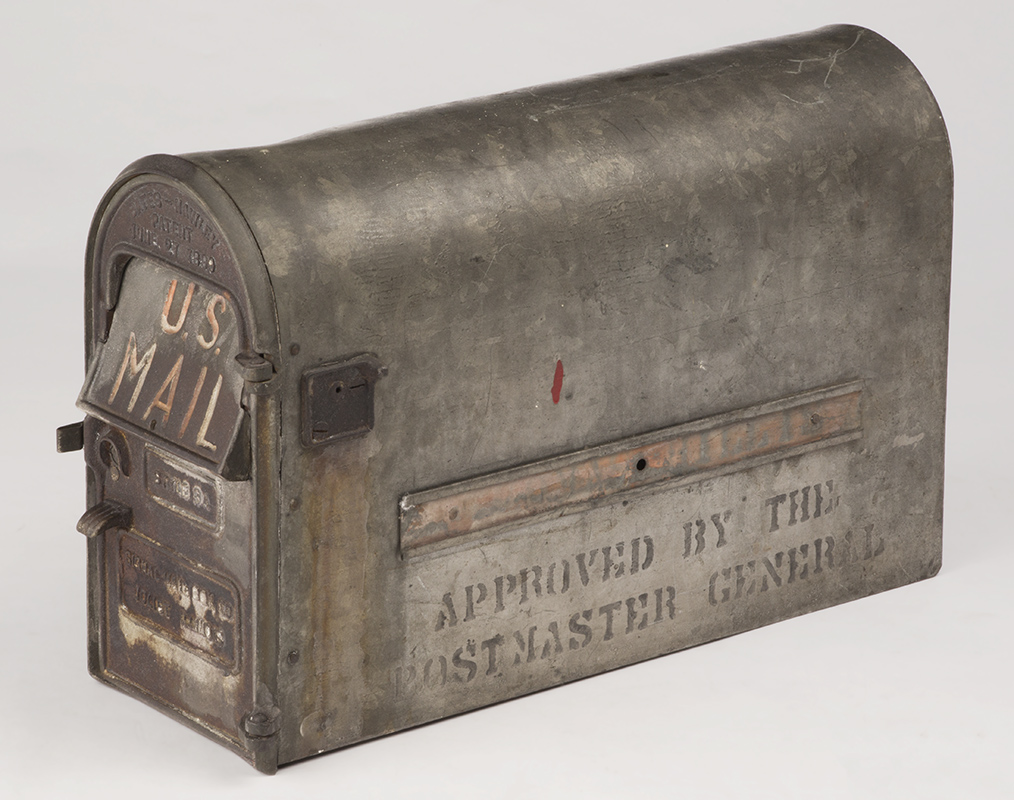 These colorful seasonal greetings were not only affordable, they were attractive and appealing.

The time was right. Between 1900 and 1910, entrepreneurs established most of the American greeting card companies, including Hallmark Cards, American Greetings, Rust Craft, and the Gibson Art Company. Many of the colorful postcards companies sold to their American customers were printed in Germany—American printing technology lagged behind that of the Germans. The postcards displayed a range of what we now think of as symbols of Christmas, including Santa Claus, children with toys, Christmas trees, houses and churches in the snow, ice skating, bells, holly, and angels. This postcard combines holly with a snowy landscape. / THF6869 Up-to-date technology made its appearance in these Christmas postcards as well. 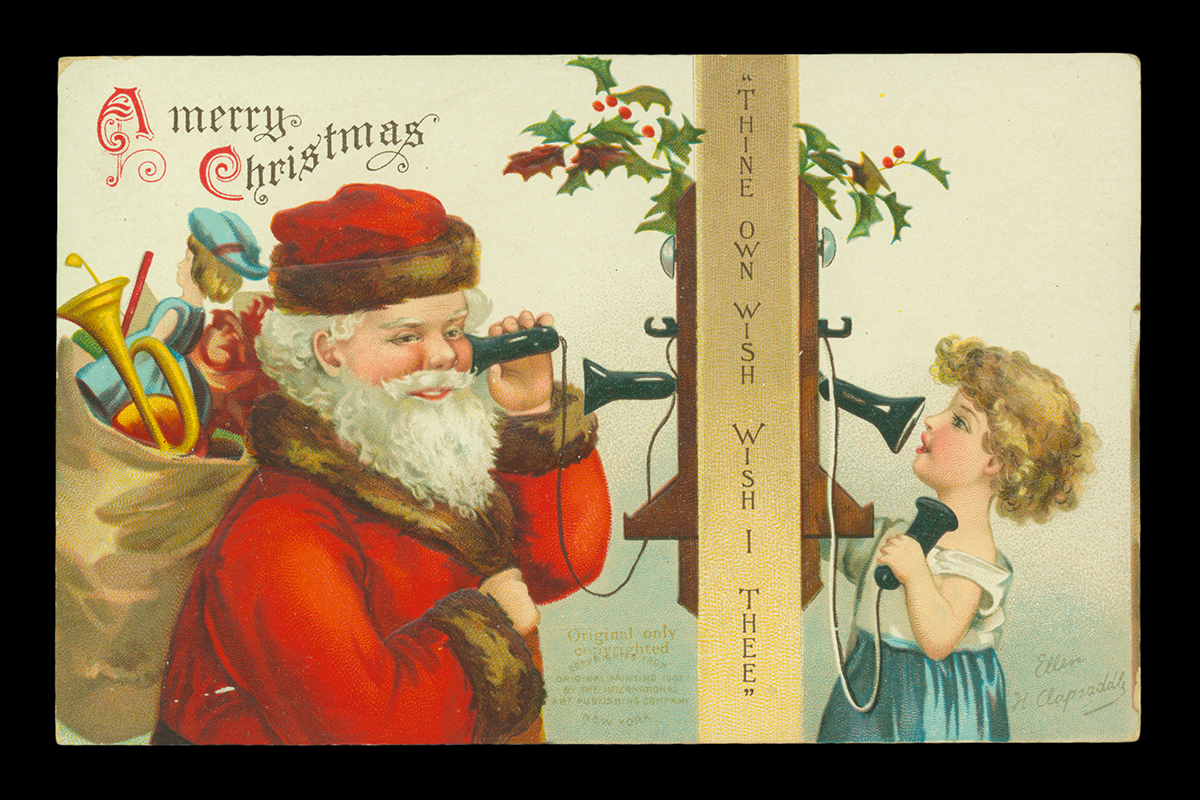 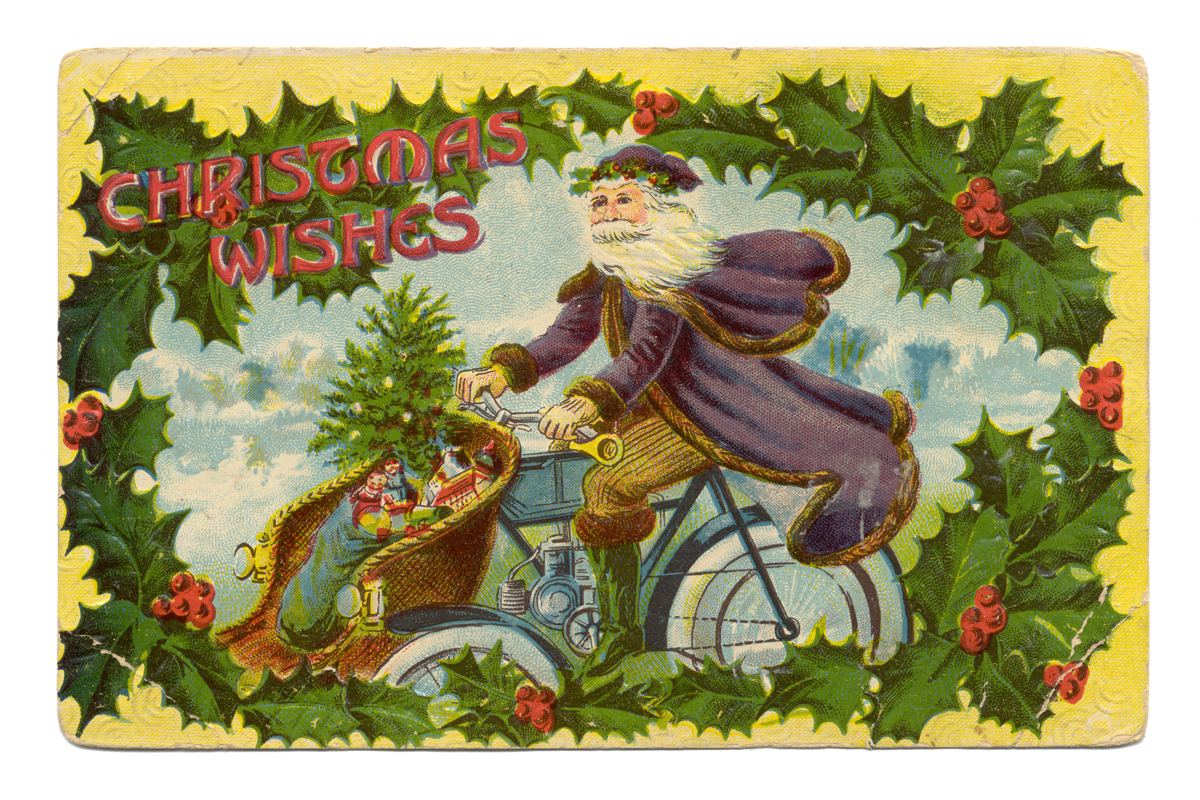 Santa tries out motorcycle delivery of presents rather than reindeer-powered transportation, 1910–1920. / THF4508

The postcard craze peaked between 1907 and 1910—it was particularly popular among rural and small-town women in the northern United States. Some 700 million postcards were mailed during the year ending June 30, 1908, alone.

Yet the postcard craze would soon ebb. In 1909, a tariff was placed on imported postcards, making the German-printed imports more expensive. The quality of available postcards began to fall. Public interest waned and artistic tastes changed. In 1914, World War I further disrupted the postcard industry, as German-produced cards and high-quality dyes used for ink became unavailable. As the war continued, many companies shifted to greeting card—rather than postcard—production. The telephone probably contributed as well, as more households had phones to reach family and friends more quickly. The “Golden Age” of postcards was drawing to a close.

Step into Christmas Postcards Past 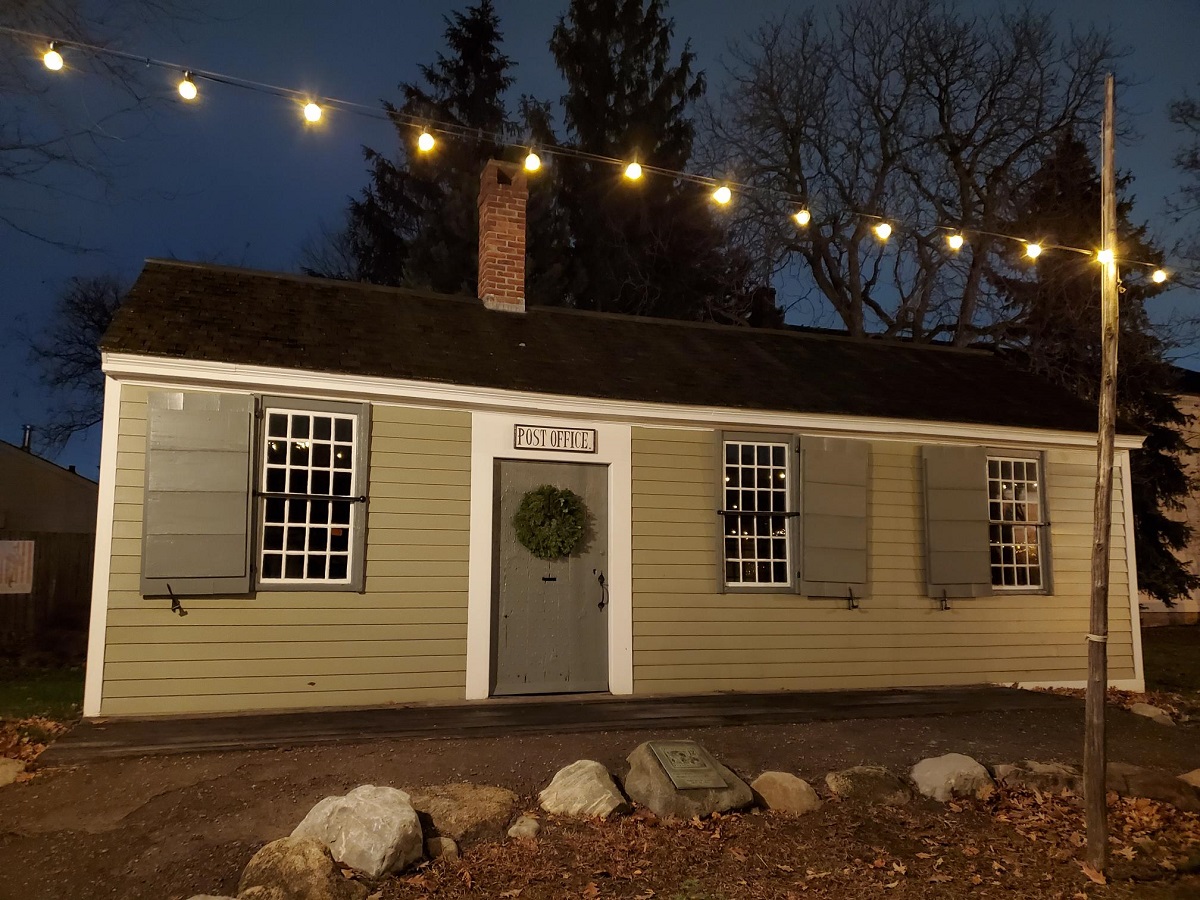 Today, strolling past the Phoenixville Post Office during Holiday Nights in Greenfield Village offers a glimpse into this slice of Christmas postal history. 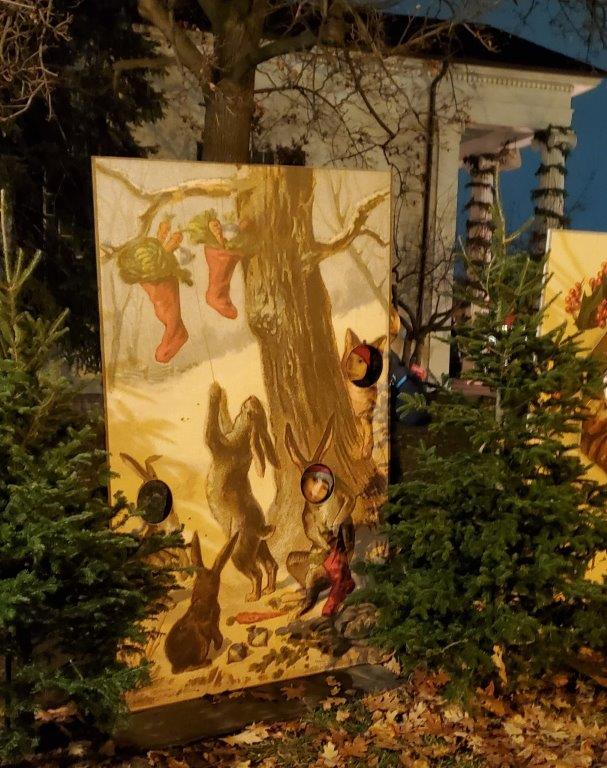 Visitors can experience the early 20th century postcard craze for themselves by posing behind enlarged versions of Christmas postcards placed near the Phoenixville Post Office—and then act as digital “postal carriers” by sending these images to family and friends by text or email. From a curator’s point of view, it’s a wonderful to see these postcards of Christmas Past become part of Christmas Present! You can take a “peek” into Christmas mailboxes of the past by clicking here to see additional early-20th-century postcards in our collection.