Rudy Ruzicska working in The Henry Ford’s photographic studio on August 10, 2021. You can see Rudy's completed photos of this display cabinet, containing "Munyon's Homeopathic Remedies" dating from the late 19th or early 20th century, in our Digital Collections here.

1956 was a momentous year in history. President Dwight D. Eisenhower and Vice-President Richard M. Nixon were running for re-election. The Montgomery Bus Boycott had just started, inspired by Rosa Parks refusing to give up her seat the previous December. The Interstate Highway System was authorized. Elvis Presley had his first chart-topping hit with “Heartbreak Hotel.” There were no satellites in space, and the United States had only 48 states, since Alaska and Hawaii were still three years away from statehood. In the midst of all this, a fresh-faced young lad officially began a career at The Henry Ford. His name? Rudy Ruzicska.

Now, 65 years later, Rudy still works at The Henry Ford, expertly photographing our artifacts as part of our collections digitization process so we can share them with the world through our Digital Collections. If you see a photo of a three-dimensional artifact in our Digital Collections, chances are good that Rudy took it. His long career and deep expertise have been featured both on Detroit television news and on The Henry Ford’s Innovation Nation (watch those clips below). He even received a congratulations on his 65th work anniversary from Innovation Nation host Mo Rocca.

Congratulations to Rudy Ruzicska who has been photographing each and every piece of the extraordinary collection at @TheHenryFord for 65 years. https://t.co/LzQjHv7E86

Mo Rocca, host of The Henry Ford’s Innovation Nation, wished Rudy congratulations on his 65 years at The Henry Ford via Twitter. / Twitter

I had the joy of sitting down recently with Rudy to discuss some of his experiences. After sharing a number of stories about our respective adventures during our careers, Rudy graciously answered a few of my questions.

Tim Johnson (TJ): Wow, 65 years, Rudy, and you can still run circles around most of us. An amazing accomplishment—what keeps you going?

Rudy Ruzicska (RR): I just enjoy doing what I am doing. I love the freedom to make things happen with photography.

TJ: Did you start in photography or were there other positions beforehand?

RR: Well, I began as a high schooler working part-time in maintenance and cleaning. While I had specific areas of responsibility, we were often sent to pitch in wherever we were needed. In my first two years I was assigned to help out often, and one of the places I was sent to was the photographic lab. My efforts were noticed, so when a position opened in photography I applied and got the job. I have been in photography ever since. 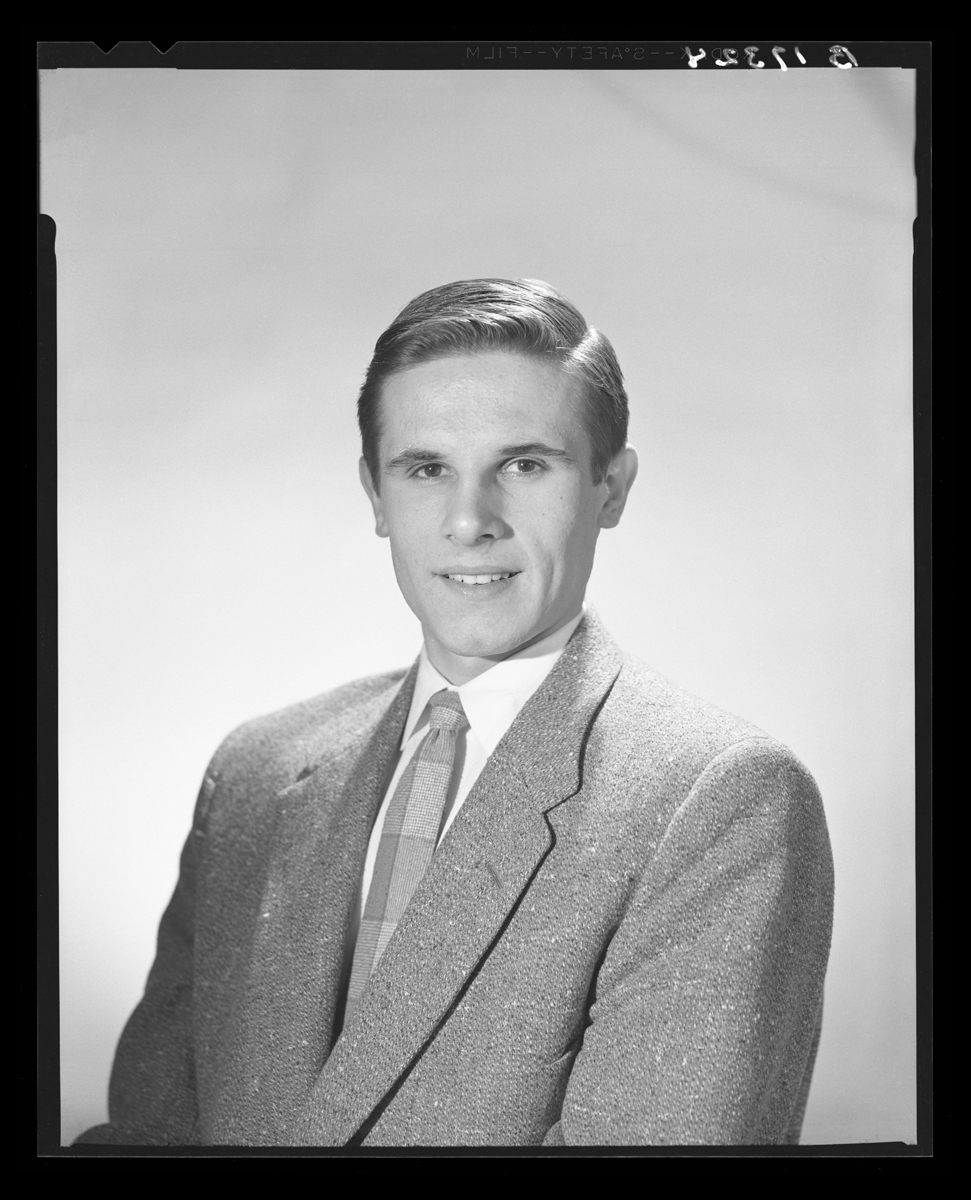 TJ: Many important events occurred during your career. Which stand out for you?

RR: The museum fire back in the early 1970s. I will always remember that day. I heard about the fire while driving in to work for a Muzzle Loaders meeting [for the Muzzle Loaders Festival, an annual event that used to be held at The Henry Ford].  I was listening to WWJ on my car radio when they broke in with an important bulletin that there was a fire at the museum. As soon as I heard this, I remember jamming my accelerator to the floor and racing to campus…. When I got to the museum, a police officer tried to stop me from pulling into the parking lot. I yelled at him to get out of my way, found a parking spot, and ran up to my office in the photography lab, which was upstairs in Lovett Hall at the time.

I grabbed my camera and all the film and bulbs my work clothing could carry. My assistant saw me and asked what he should do. “Follow me!” I said. We ran down the stairs, out of the building, climbed a fence that used to separate our campus from Ford Motor, and got to the museum. I began taking photos, first from the outside and then inside the museum. I wound up climbing up the clock tower and got pictures of what was happening from that perspective. When it was over, I was asked to photograph the damage. That day will always stay with me. 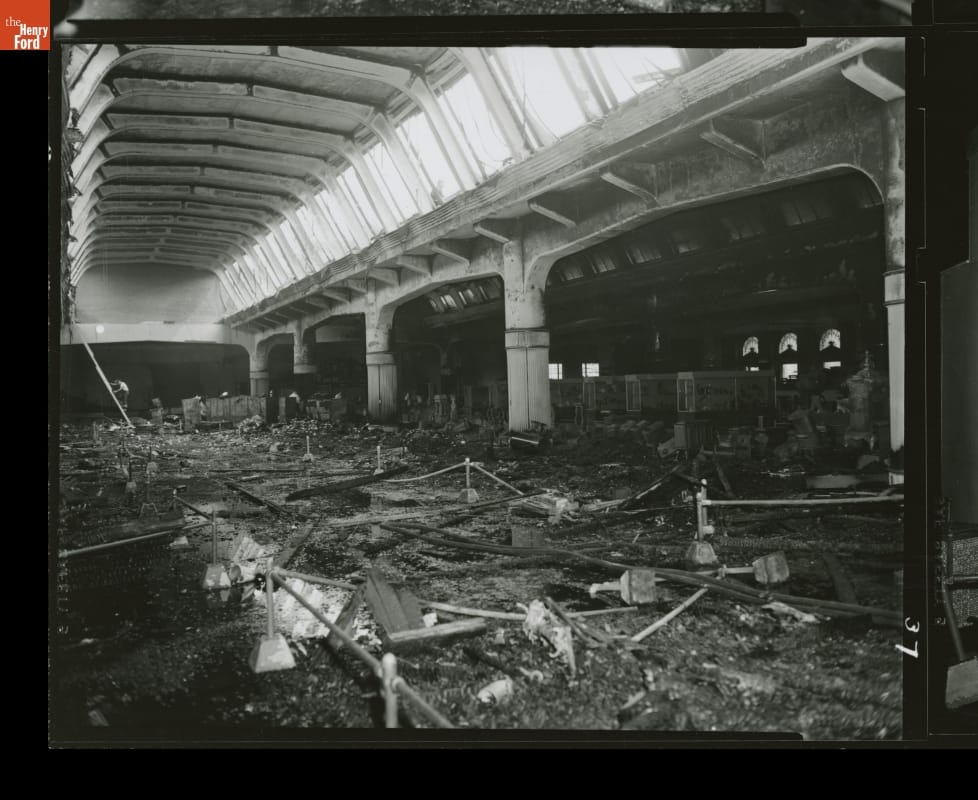 One of the photos taken by Rudy and the photographic department of the aftermath of the August 9, 1970 fire in Henry Ford Museum. / THF111716c

TJ: That is an incredible story about one of the most historic days in our history, Rudy! Certainly a tale of which to be proud. What other accomplishments over your career are you particularly proud of?

RR: Two come immediately to mind. One was being asked to take over the Muzzle Loaders Festival we used to host. I have always been heavily involved in activities like that and, when the festival needed a makeover, I was asked to lead the way. That I was able to re-create the festival and make it more popular, profitable, and cost-efficient has always been a source of pride for me.

The other would be my role in the redesign project of Greenfield Village back in 2003. I was informed that we needed progress pictures of the project from start to finish. No specific plan existed, so I got to create both the process and the photographic record of the project. I truly enjoyed doing that. 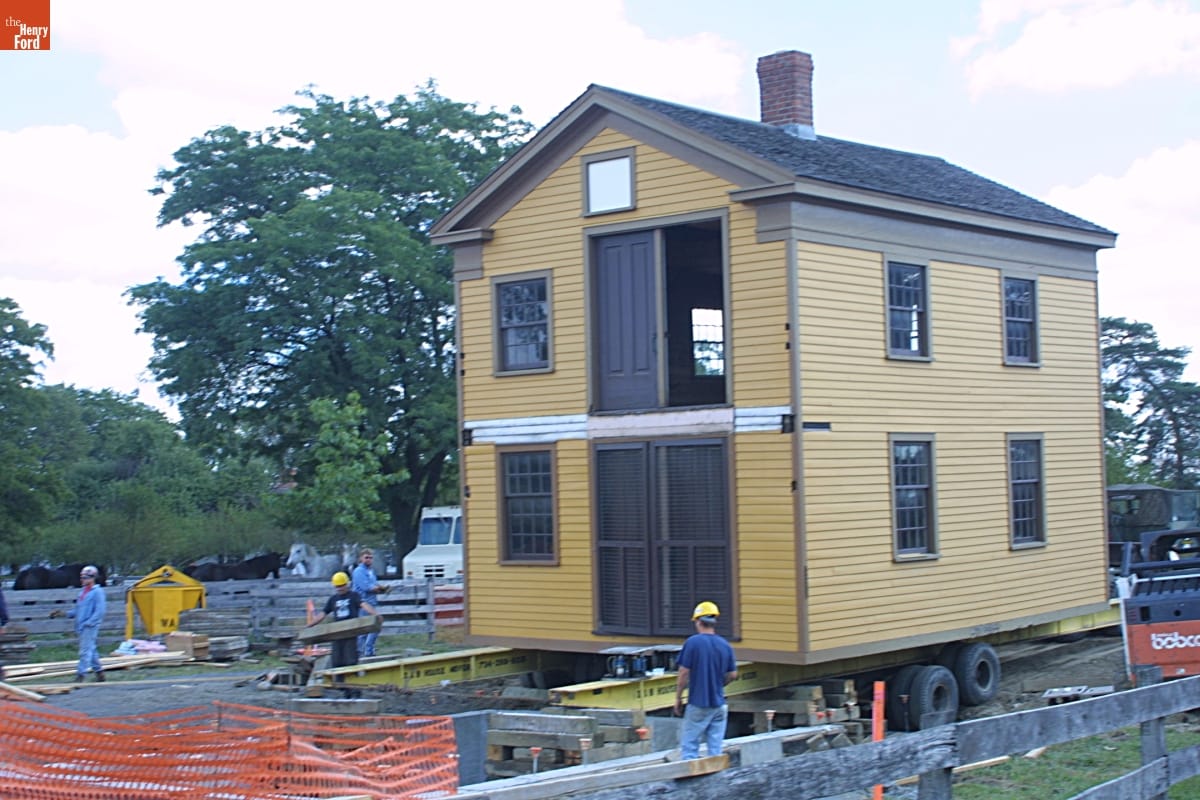 One of the thousands of photos that Rudy and the photographic department took of the 2002–2003 Greenfield Village restoration project. Here, the Richart Wagon Shop is relocated. / THF18978

TJ: When asked how to best work with Rudy, I have always replied to not tell him what to do. Instead, describe what you want to accomplish and trust in Rudy’s creativity. He will get you what you need.

RR: That is kind, thank you. I do enjoy being creative and finding ways to help people make their vision happen using photography. For example, if someone questions why I am using ten lights for a single shot, I can reply that each of those lights is doing something different for the shot. 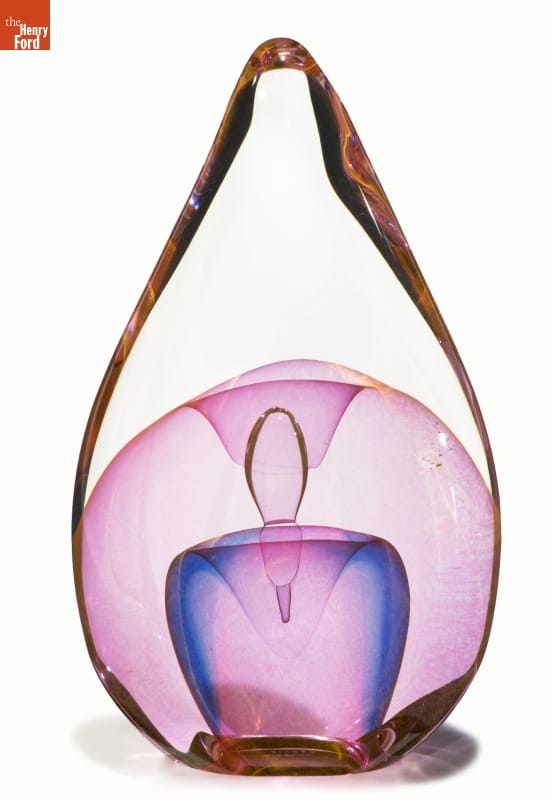 Photographing glass sculptures, like the ones that are on display in the Davidson-Gerson Modern Glass Gallery in Henry Ford Museum of American Innovation, requires a significant amount of set-up and expertise. Rudy photographed this piece, Emergence Series by Dominick Labino, and hundreds of additional glass pieces destined for the glass exhibit in the museum, as well as the Davidson-Gerson Gallery of Glass in Greenfield Village.  / THF163683

TJ: What is it about photography which has kept you so excited for so many years?

RR: That people like my work! I still get a thrill when someone tells me they want my pictures because they like the way that I do it. The best compliment I can get is when I hear, “Rudy, I can tell those were your pictures!"


Check out Rudy at work and learn more about how we use the photographs he takes as a part of our digitization process in this clip from The Henry Ford’s Innovation Nation. / The Henry Ford’s YouTube channel

TJ: What else comes to mind about your career?

RR: All the great interactions I have had with people. I have met many Ford family members, and I enjoy seeing them come around. I have been asked many times over the years to take pictures for them, and I consider that a great compliment. I have met so many celebrities, too, while taking pictures during a meet and greet. Where else would I have gotten the chance to do that?

Congratulations on your 65th service anniversary, Rudy, and thank you for everything you continue to do to make The Henry Ford the special and beloved place it is. We would not be who we are without you, and may we together continue building on your legacy for many years to come.


Tim Johnson is Program Leader at The Henry Ford.