In preparing for our temporary exhibit Light and Joy in the Holiday Season, The Henry Ford’s curators solicited artifacts, photographs, and stories from The Henry Ford’s staff, among others. Below is one of the stories that was shared for the New Year display case. 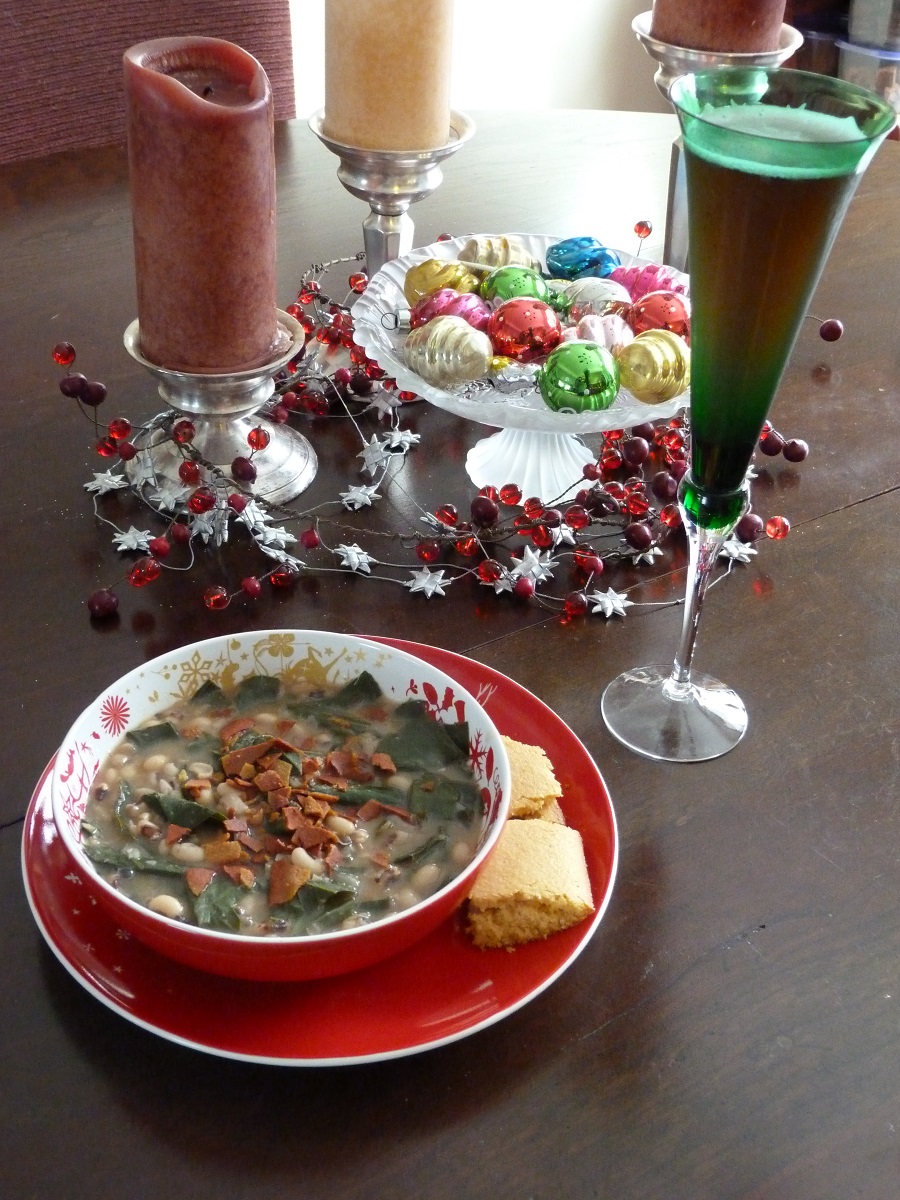 Though I’ve now lived in metro Detroit for more than two decades, I spent my formative years in the South, growing up in Jacksonville, Florida—the largest city (in terms of square footage) in the contiguous United States, an area split by one of the few rivers in the country that flows north (the St. John’s), and the hometown of Lynyrd Skynyrd.

Neither of my parents were born in Jacksonville. My dad grew up in Pennsylvania, and my mom on Lookout Mountain in the small town of Fort Payne, Alabama. During the Vietnam War, my dad was drafted into the military and sent to Fort McClellan in Anniston, Alabama, to utilize his newly minted bachelor’s degree in architecture to work on base buildings. At that time, my mom was living in Anniston with her sister and her sister’s husband, who was also involved in architecture on the base. My parents met, secretly eloped, moved briefly to Pennsylvania after my dad was discharged, then moved to Jacksonville for a job opportunity for my dad just after I was born.

Being as close to Georgia as you can be and still be in Florida, Jacksonville is definitely the South—the “Bold New City of the South,” as police cars and road signs proclaimed. And Southern foodways predominated, even as economies and cultural traditions slowly became more global. My mother was a fantastic cook who combined her Alabama farm roots with Jacksonville’s traditions—I grew up eating fried okra, grits, redeye gravy, barbecue, boiled peanuts, greens, banana pudding, scuppernongs and muscadines, sweet tea, and pecan pie, and didn’t realize these things weren’t universally beloved, valued, or available until I moved to Michigan. 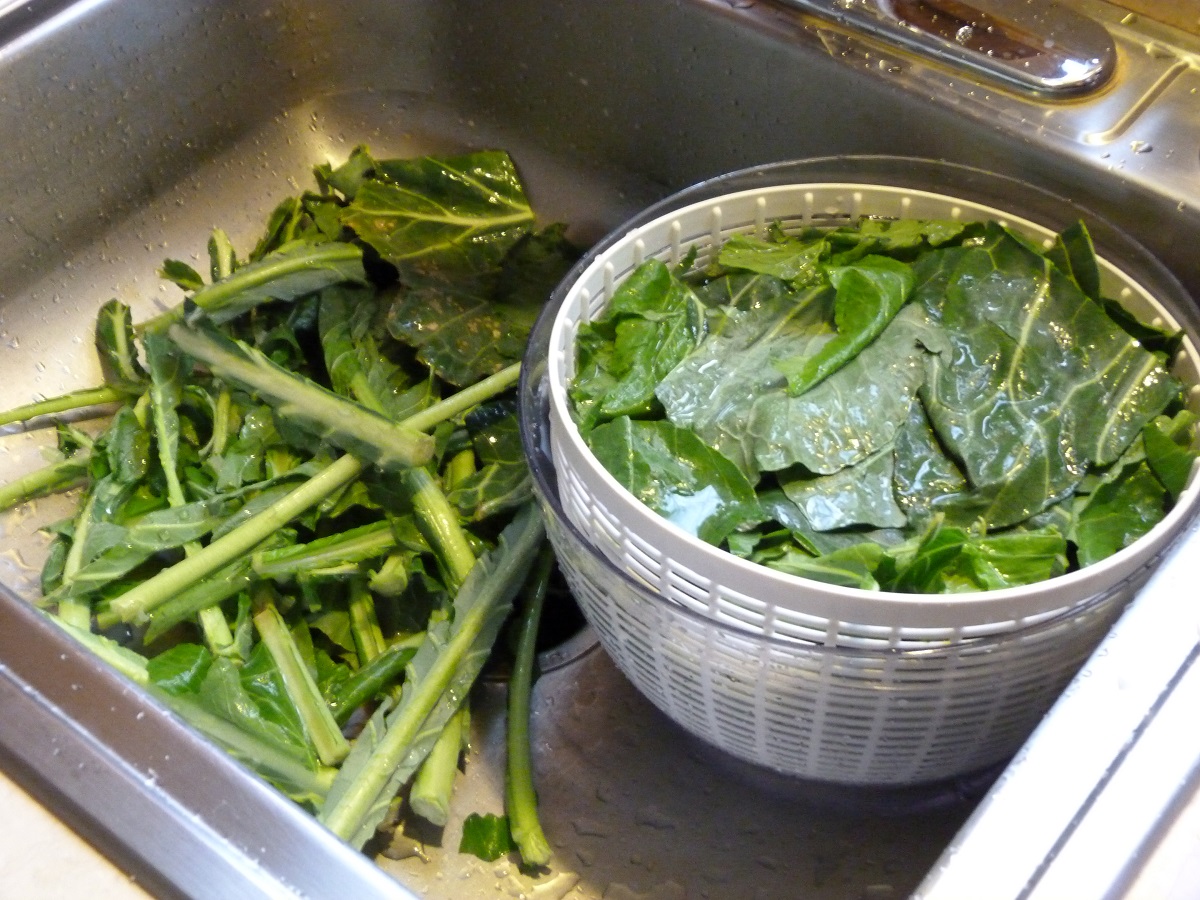 Greens are a common food in the South. Here, collard greens are de-spined and washed for use in hoppin’ john, 2011. / Photo courtesy Ellice Engdahl

One thing I don’t remember ever not having on New Year’s Day was hoppin’ john. The traditional version of the dish is black-eyed peas cooked in broth with onions and a bit of ham or pork, served over rice, often with greens and cornbread on the side. (We Southerners like our carbs.) I don’t know when or where my mother picked up the idea of serving hoppin’ john on New Year’s Day—one of my cousins did not know what hoppin’ john was when I asked her this year, so I am guessing it did not originate in Alabama. She may have learned about it from friends in Jacksonville who followed the tradition.

The reason this humble staple is eaten on New Year’s Day is for good luck—the greens are the color of money, the peas represent coins, and some people even say the color of the cornbread relates to gold. Some long-time family friends from Jacksonville still refer to their annual plate of hoppin’ john as their “luck and money.” But beyond that, it’s a cheap, filling, and delicious meal.

As near as I can recollect, my mom made it fairly traditionally. She might have thrown a hambone into the peas for extra flavor—at least, before I became vegetarian. After I became vegetarian, she would cook a tray of bacon separate from the peas, so that the meat-eaters in the family (e.g., everyone but me) could crumble some over to get their pork fix, while I could eat meat-free, or crumble on some vegetarian bacon. 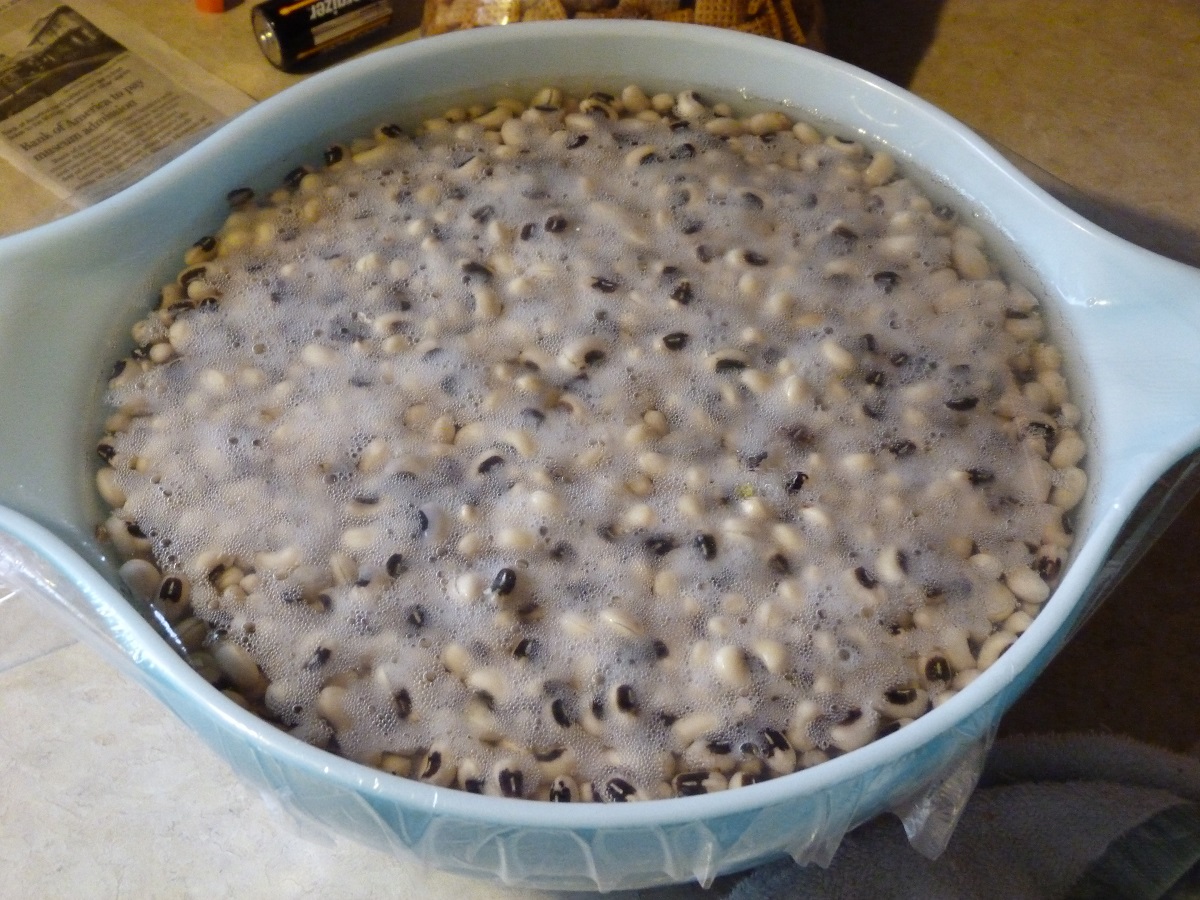 When I moved to Michigan, I wanted to continue the tradition with a meat-free version, but also wanted to simplify preparation—cooking peas, rice, and greens all separately, along with cornbread, is a lot of work for one person, especially given that it is most delicious when it all gets mashed together on the plate in the end anyway.

My family tended to like our hoppin’ john peas on the soupy side—something in keeping with the Southern tradition of “pot likker,” where you eat the flavorful broth that forms when you cook vegetables in seasoned water. I also took inspiration from another simple dish my mother made often—“bean soup.” This was just dried beans (pretty much any kind) cooked with onions in broth until they were tender and beginning to fall apart. It might sound dull, but cooked slowly for a couple of hours, and finished with a substantial amount of butter…. Yum. Once it was clear a soup was the simplest way to go, it was a pretty easy logical next step to add the greens right into the soup, removing the hassle of cooking them separately. 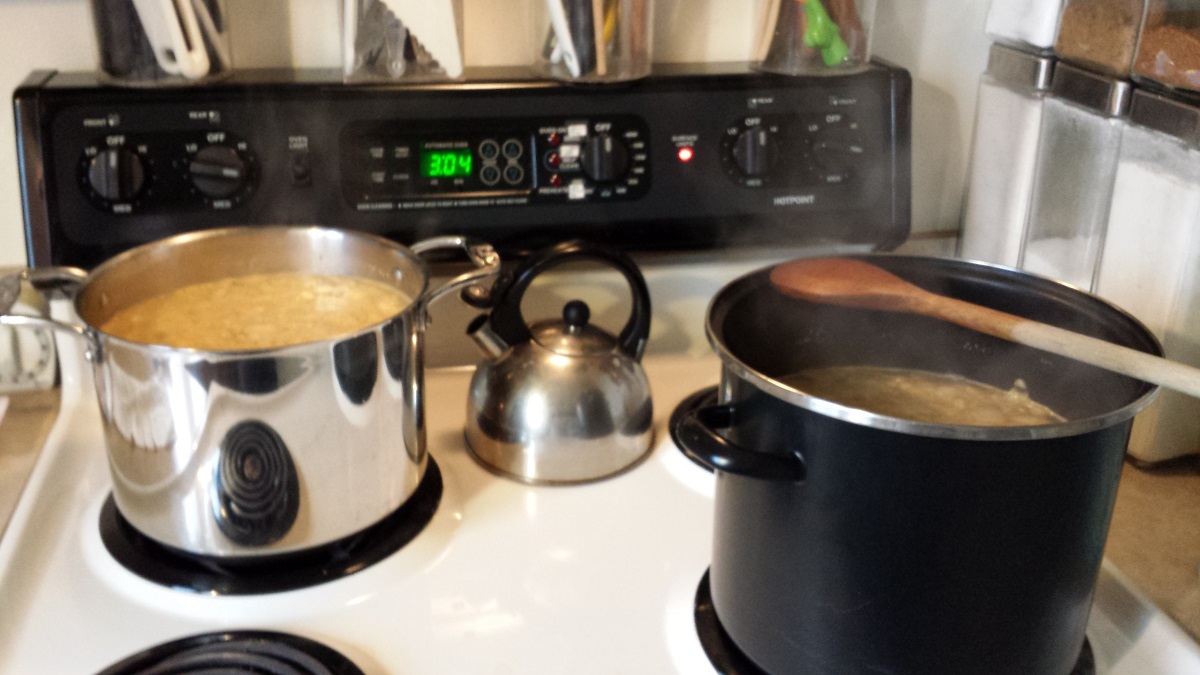 Cooking a big batch (for eating and for freezing for later) of my version of hoppin’ john, 2015. / Photo courtesy Ellice Engdahl

Below is the recipe (insomuch as I have one) I came up with.

Pick through the dried black-eyed peas carefully, discarding any brown ones and any stray pebbles. (In my experience, every bag of dried peas contains at least one rock. Though picking through them is tedious, it’s far better to find the pebble(s) with your fingers than your teeth.) Rinse the peas in a strainer, then add them to a large bowl and cover them with a lot of water. Cover the bowl with plastic wrap or foil and let the peas soak overnight. They will grow in size substantially, maybe double.

When you’re ready to make the soup the next day, drain the peas, discarding the soaking water, and rinse them again.

Chop the onions and sauté them in a stockpot in some of the butter until partially softened, then add veggie stock and the soaked peas. Bring to a boil, then reduce to a simmer. Cook until the peas are nearly soft, stirring from time to time, usually one to two hours.

While the peas are cooking, de-spine, wash, and chop the collard greens into bite-sized pieces. When the peas are about half to three-quarters cooked, add the greens to the stockpot, and continue cooking until they are tender. Add additional butter to the soup to taste. (You could also add salt/pepper if desired, but usually the vegetable broth adds plenty of both.)

Cook the veggie bacon according to package directions. Serve up the soup, and crumble a strip or two of veggie bacon on each serving. Enjoy! 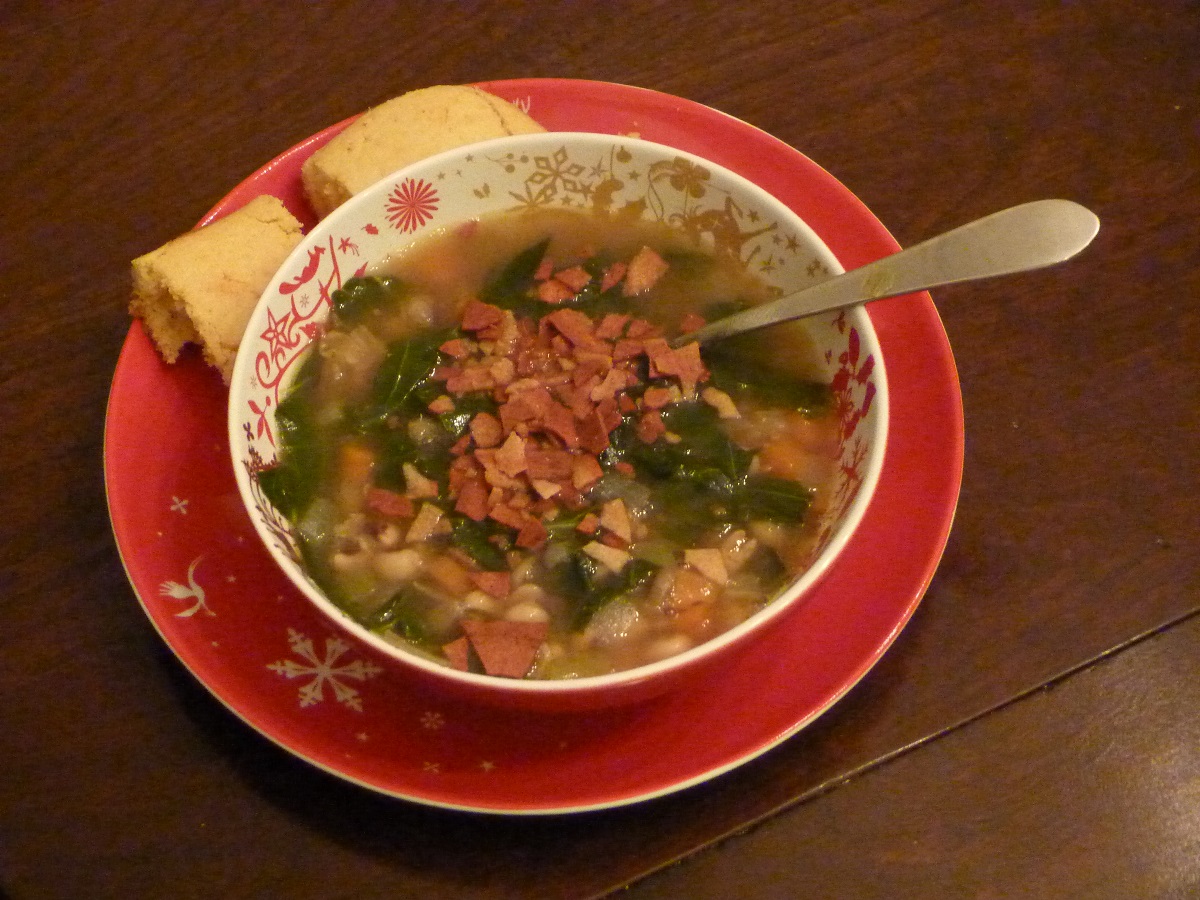 Cornbread on the side is pretty much required. My mom made her own dry mix, which she combined with milk, eggs, and (if vegetarians weren’t present) bacon grease to bake, but since I don’t have her recipe, I just (somewhat shamefully) use the one off the back of the Quaker cornmeal package—though I use less sugar, replace the cow’s milk with plant-based milk, and replace the oil with melted butter—so I guess I’ve modified that as well.

I always make a double batch of hoppin’ john and cornbread and stash the remainder in the freezer to get me through the rest of the cold Michigan winter. It just gets better as you reheat it and the flavors continue to meld. 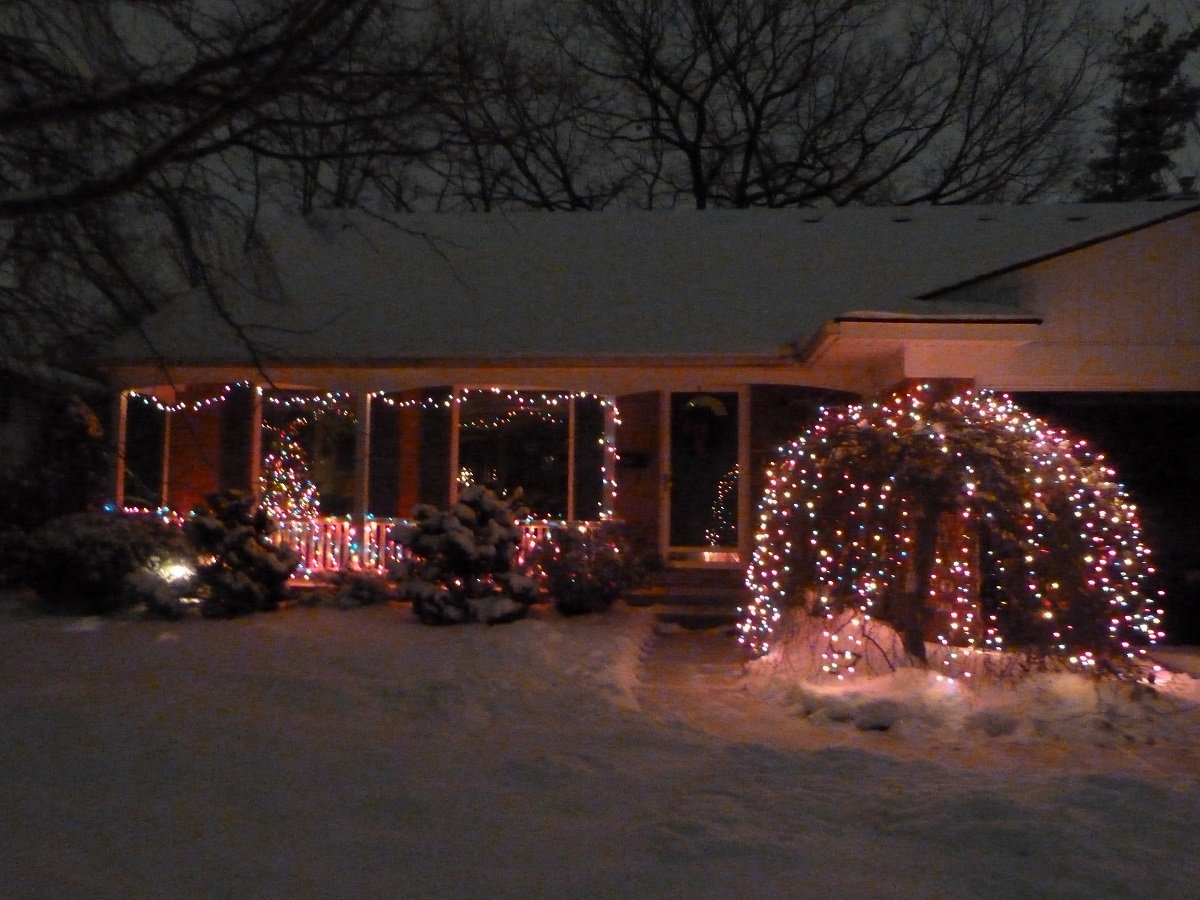 Vegetarian hoppin’ john (soup) might not be the most common tradition, especially in Detroit—but it’s a sign of the times that you can find a vegan version today at Detroit Vegan Soul. But the most satisfying version is the one you make yourself—and make your own.