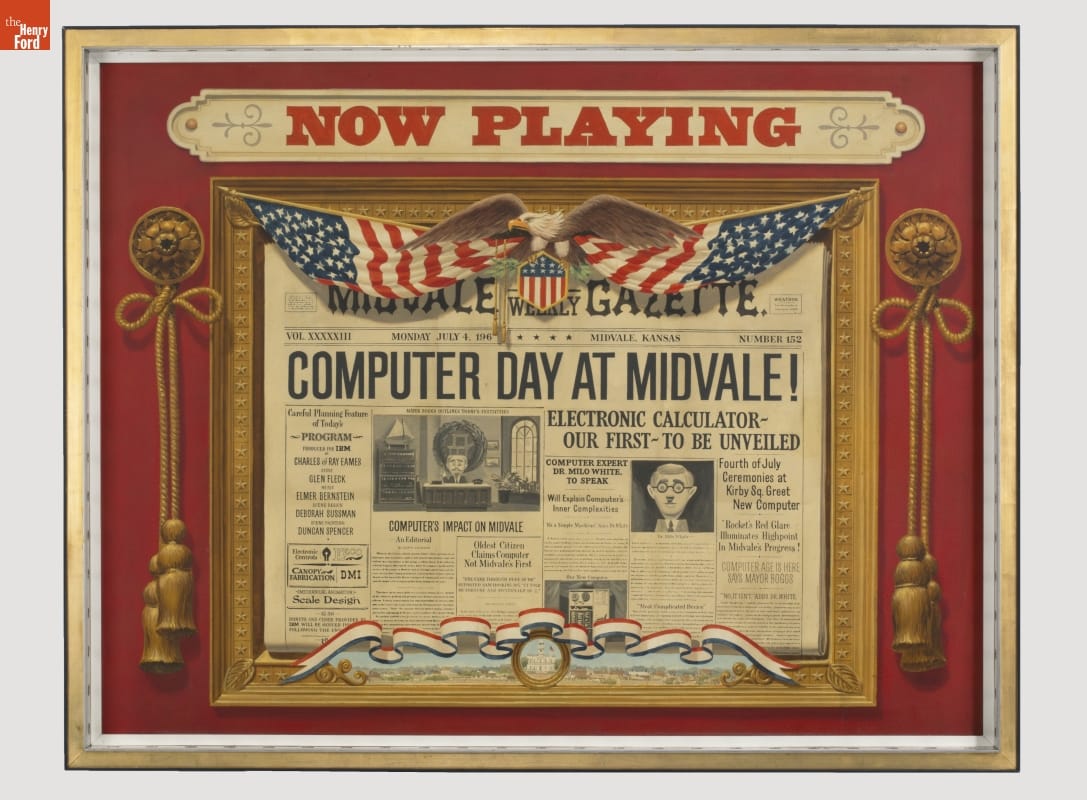 Visitors to the 1964 New York World’s Fair’s IBM Pavilion were submerged in a futuristic world made possible by computers. A world imaginatively conjured up by an intricately detailed fake newspaper with the headline “Computer Day at Midvale!”

The one-of-a-kind aluminum panel was created by the Eames Office, the studio of famed designers Charles and Ray Eames. Hand-painted with imagined newspaper headlines and draped with patriotic bunting, it hung on the back of one of the pavilion’s “Little Theatres” and was surrounded by lights, intended to lure visitors.

“The themes in the Midvale panel, and the IBM Pavilion on the whole, document a critical moment where people were being exposed to the culture of computing on a mass scale,” said Kristen Gallerneaux, The Henry Ford’s curator of communications and information technology. “Accessible systems like the IBM/360 were just around the corner, whose adoption would touch (and potentially disrupt) the lives of information and office workers. IBM needed to address this wariness of technology — they needed to humanize computers. The company found their solution in the playful visual communication skills of the Eames Office.”

Last year, The Henry Ford acquired the aluminum panel from its original owners, whose father, Robert Charles Siemion, had worked as an engineer and manager at the 1964 IBM Pavilion.

“The ephemeral nature of those fairs was such that most of the displays — and even the architecture — would be dismantled after the fair was over,” said Gallerneaux, who learned about the panel in an article on antique pricing. “But Siemion, as a manager, was invited to take home part of the pavilion as a memento. We’re lucky that he chose to salvage this panel and that his children knew to hold onto it all these years.”

The Eames Office employees who designed the pavilion are listed on the newspaper’s left in a credits area. The panel is among several IBM Pavilion-related objects The Henry Ford has acquired and the third such artifact associated with Charles and Ray Eames.

“Charles and Ray Eames were fascinated with the circus and early Americana, and there’s a wonderful sense of these themes coming together with high technology in the panel,” Gallerneaux said. “The IBM Pavilion was designed to send you into another head space so you could synthesize the concepts coming together at the time. It was an interesting collision of computing history and design history happening in one place.”

From a conservation standpoint, the panel, well maintained by its owners, only required minimal treatments. “It’s interesting to think about the public as stewards of material culture,” Gallerneaux said. “We acquire a lot of interesting collection items that way.”

The “Computer Day at Midvale” panel will appear in a future exhibit at The Henry Ford about communications and information technology.