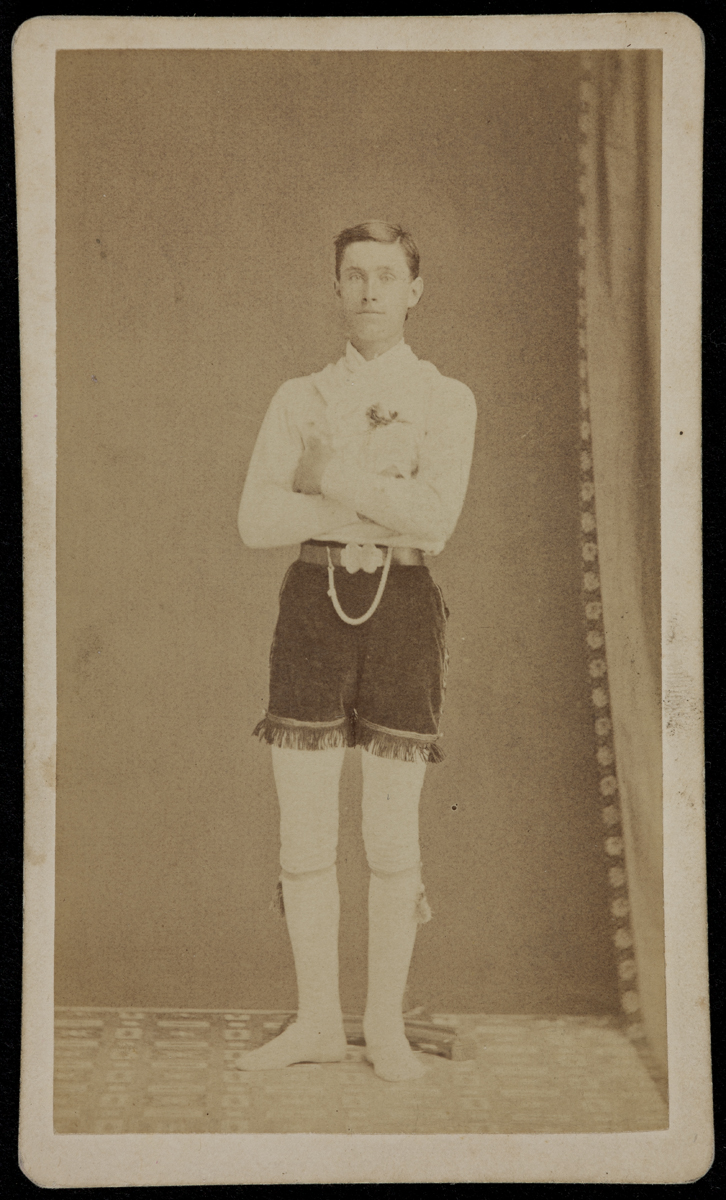 Sometime during the late 1870s, members of the Alert Hose Company in Big Rapids, Michigan, posed for the local photographer. Arms crossed and standing tall, each of the firefighters wears a uniform—typical of those worn when competing in a local or regional firemen's tournament. The men had won several tournament prizes by the time they posed for these photographs—perhaps the prize money helped pay for the cartes-de-visite that became a remembrance of the company's victory. But these images offer more than just a glimpse at the Alert Hose Company's participation in a sporting event. They document the culmination of the company's years of hard work protecting Big Rapids against the ravages of fire, the pride in their company and their community, and their connection with the greater fraternity of 19th-century firefighters.

Big Rapids, located in Mecosta County, Michigan, was incorporated in 1869. Like many 19th-century cities, it was susceptible to fire. The wood used to construct early homes and businesses offered ready fuel to the flames of an unwatched candle or lamp or a stray ember from a stove or fireplace. According to the 1883 Mecosta County history [p. 645], "Big Rapids has been a sufferer from fire at various times… The first fire of any consequence in the place was… in the year 1860." It was not any better in 1869 when another disastrous fire occurred [p. 645]: "No water supply or engines for extinguishing fires were here at that time, and common pails or buckets were the only appliance afforded. Lines of men were formed to supply water with buckets from wells in the vicinity, and even from the river, but without avail. The Mason House... was only saved by tearing down a small building [nearby] belonging to Harwood & Olds, and then hanging carpets and bed-clothes from the roof and windows, and keeping them saturated with water."

Finally, in 1871, men in Big Rapids organized volunteer fire companies, and the citizens and the city government discussed creating a local water supply for fire protection and private use.

Volunteer firefighters needed to work as a unit when it came time to fight a fire. Nineteenth-century fire companies usually consisted of men from similar class divisions, backgrounds, or ethnic groups and kinships. This sense of fraternity cemented the unit's cohesion. The camaraderie and kinship of fighting fires and their unique status as protectors in the community bound the firefighters together.

The Alert Hose Company was one of several volunteer firefighting companies to organize in Big Rapids in the early 1870s. The volunteers' job was to get to a burning structure as quickly as possible—pulling a hose cart or carriage—and attach hoses to an available water source so they could begin controlling the conflagration. By 1876, the growing city of Big Rapids had at least two other hose companies (Defiance and Protection) and the Pioneer Hook and Ladder company. (Hook and ladder companies employed hooks to tear down parts of buildings to limit a fire's spread and ladders to fight fires and rescue individuals in multi-story buildings.)

Little is known about the men who made up the Alert Hose Company, though names written on the back of some of the photographs provide a start. A quick review of census records from 1870 and 1880 and a city directory from 1884 give a few clues about a small subset. They were young working men mostly in their mid-20s and a couple in their 30s, though one was in his late teens. Several were related in some fashion. Their occupations included laborers, clerks, and a drayman (teamster)—none of the known men owned a business, though a few may have owned farms. Being part of the local fire company provided connections to businesses in the community to help guide their careers. A more thorough search of records (outside the scope of this blog) would provide more information on why this group of men came together to form the Alert Hose Company.

By the 1870s, fire companies tested their firefighting skills against other companies at various regional, state, and national firemen's tournaments. Local companies usually competed against one another on holidays or community fair days. State and national associations sponsored large competitions and set tournament rules and dates. Companies invited to participate usually competed in hose cart races, hook and ladder competitions, and pumping contests (to see how far a company could spray water from a hose), among other activities.

Training for and participating in firemen's tournaments tested and sharpened a company's firefighting skills, promoted a sense of pride in competition, and strengthened the sense of teamwork and fraternity. Participation in these tournaments by fire companies also engaged the local community. Government officials, business leaders, and ordinary citizens supported fire companies by cheering them on and providing monetary support through donations and prize money. Finally, friendly competitions between local companies broadened the sense of fraternity by creating a larger brotherhood of firefighters.

The Alert Hose Company in Tournaments

The men of the Alert Hose Company in Big Rapids, Michigan, began participating in hose cart races at various tournaments in the mid-1870s.  In a hose cart race, a fire company ran a set distance pulling a cart reeled with hoses. Men in the company unwound the hoses, attached them to a water source, and then sprayed water. The fastest time won the prize. A review of articles from the Detroit Free Press highlights the successes of the fire company and the support of its community.

In 1875, the Alert Hose Company (along with the Pioneer Hook and Ladder company) made an appearance at the State Firemen's Tournament held in Jackson, Michigan. Reports mentioned no prizes, but, according to the papers, when they returned home, the men were met "with an enthusiastic reception and dinner[.]" On July 4, 1876, the Big Rapids' firefighting companies competed against one another for prize money. The "Alerts" won the champion belt and a cash prize of $50 offered by the mayor. The other firefighting companies took home lesser amounts funded by the citizens.  The following year at the Mecosta County Fair, the "Alerts" took home a $100 purse in the hose cart race.

A bigger prize awaited in 1878. In September, the "Alerts" headed off to Chicago to compete in a national competition. Their teamwork paid off; they finished second within a long list of competitors. The prize this time was noteworthy—$300 in cash and a nickel-plated hose cart made by Silsby Company of Seneca Falls, New York.  Citizens of Big Rapids turned out to greet their heroes when they returned home.  Evergreens, flags, and banners decorated the local hall, the women of the town prepared a dinner, and, of course, there were speeches. A final mention from this period came in an 1882 article that reported the men of the Alert Hose Company had won a special prize of $10 at the State Firemen's Tournament for the "best appearing company."

Throughout the 1870s, local fire companies organized in the newly formed city of Big Rapids, Michigan. These volunteer firemen worked to protect their homes and community against the ever-present danger of fire. Each company needed to work as a cohesive unit when fighting flames and smoke. Similar backgrounds, ethnicities, and economic status—and the desire to protect their community—brought these men together. And local and regional firefighters' tournaments provided a way to hone the skills needed to become an effective team. The small images shown here, taken by a local photographer, point to the unity and pride that the men of the Alert Hose Company had in their avocation and the fraternity they represented.

See all 14 members of the Alert Hose Company (including one member not in uniform) in The Henry Ford's Digital Collections here.