This is the fourth of a series of blog posts presented in conjunction with the traveling exhibition, Louis Comfort Tiffany: Treasures from the Driehaus Collection. The exhibit, consisting of approximately 60 artifacts, is on view at Henry Ford Museum of American Innovation from March 6, 2021, through April 25, 2021. Many of the objects shown here are from the collections of The Henry Ford and provide background on themes in the exhibition; those not from our collection are credited by source.

The Influence of Tiffany in His Lifetime 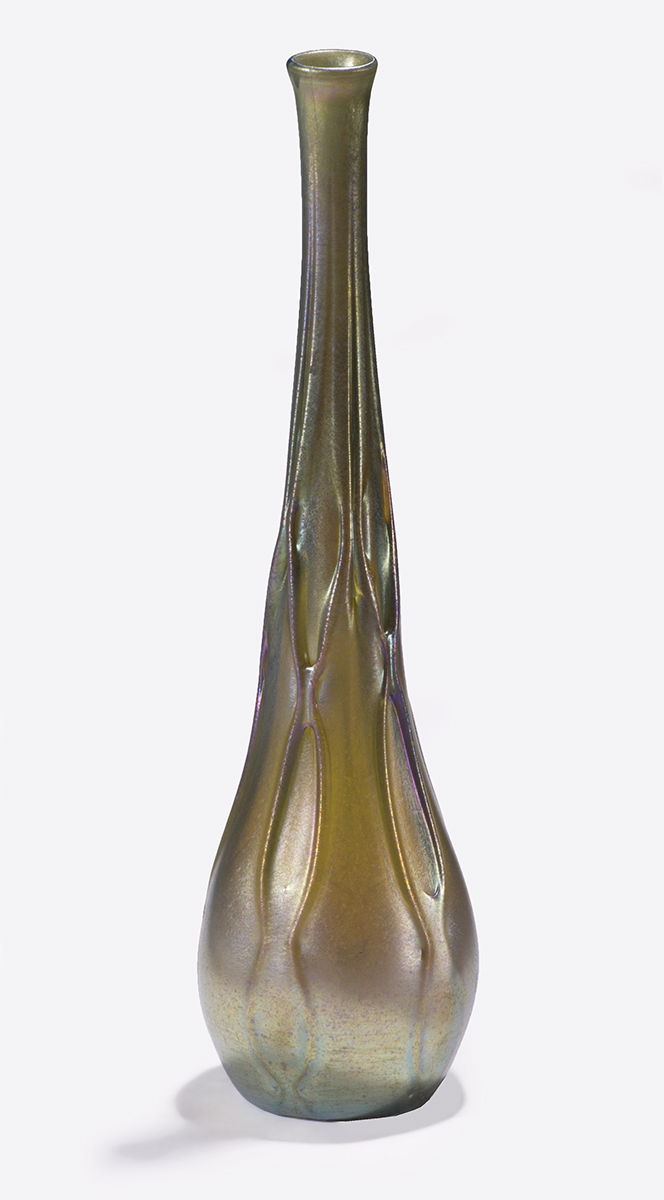 By 1900, Louis Comfort Tiffany had transformed the Art Glass Movement, begun in the 1880s, into a much broader and more international trend. Working with his patented “Favrile” glass, which diffuses light on the surface into a shimmering, or iridescent effect, Tiffany transformed the glass world. 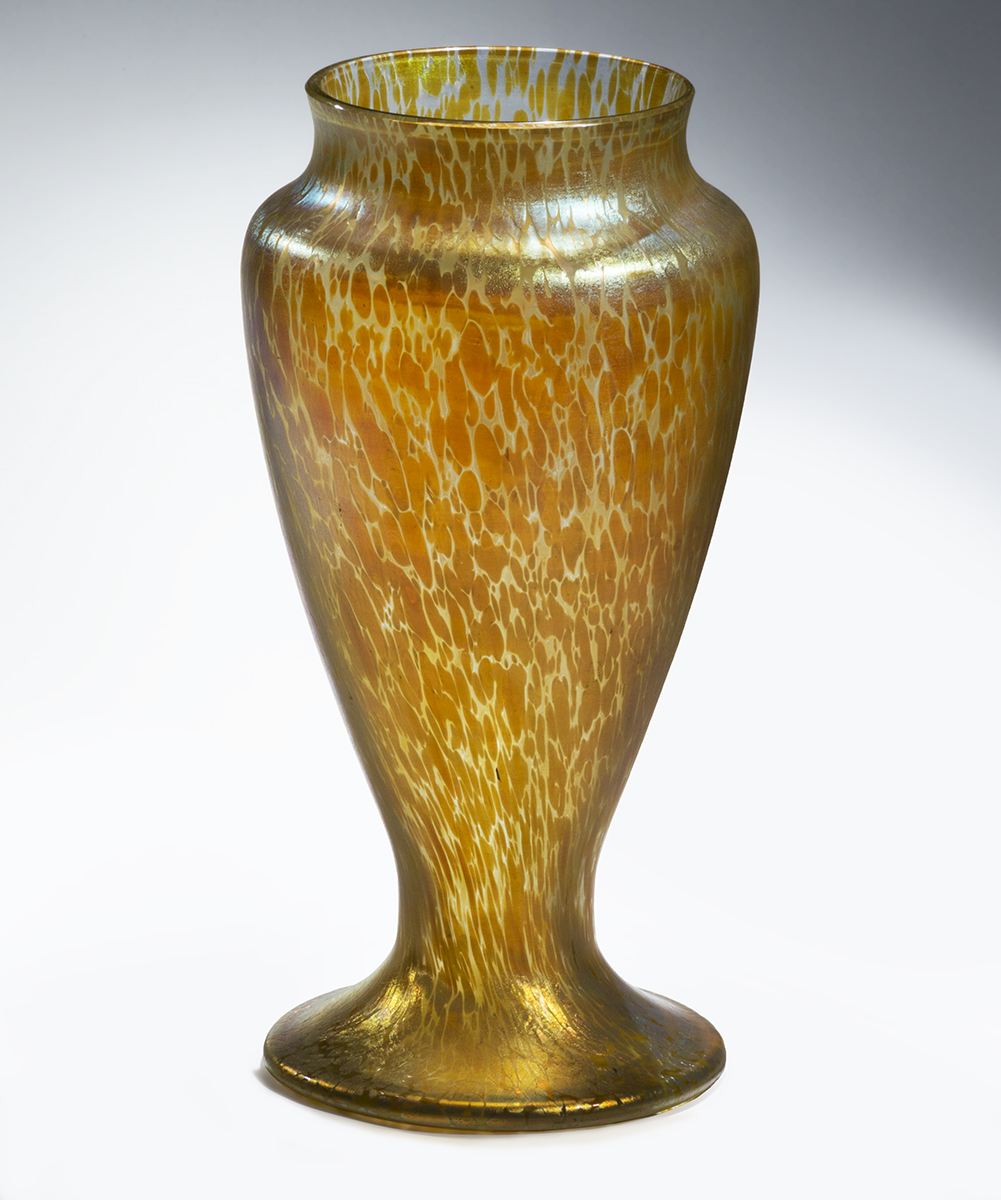 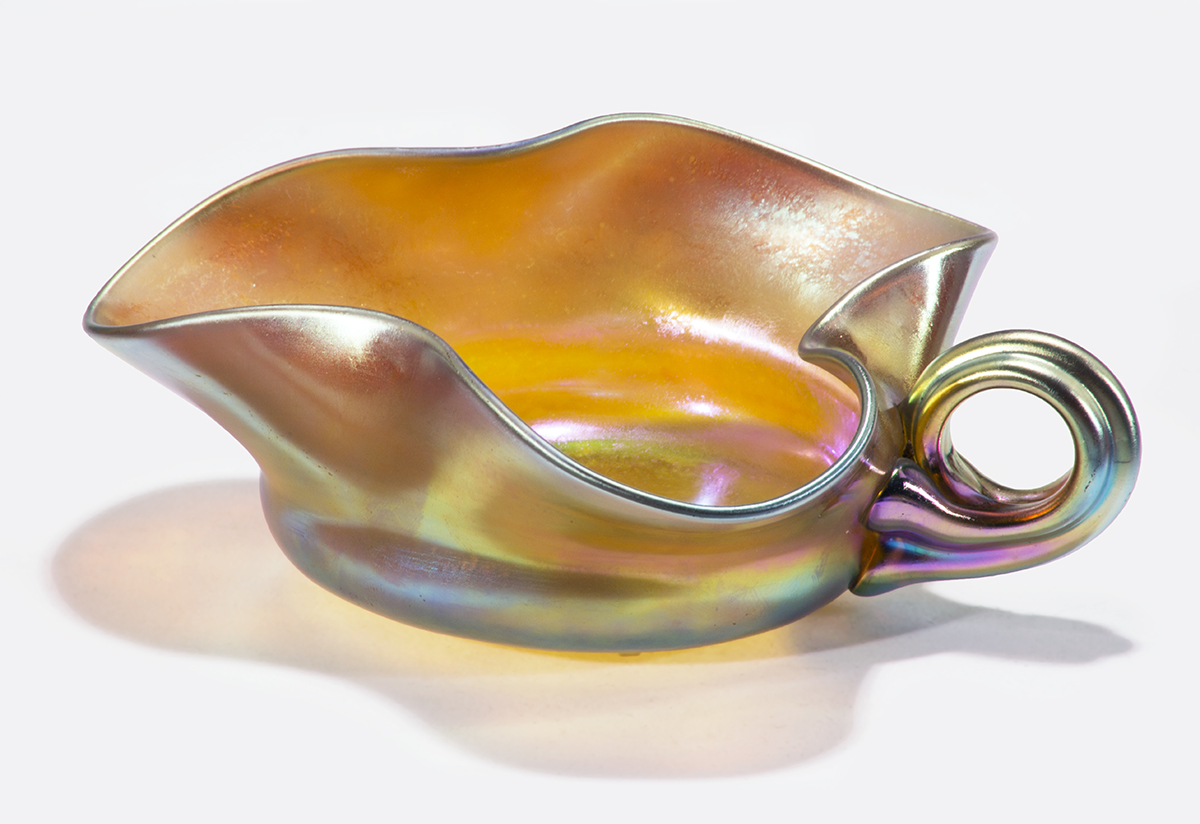 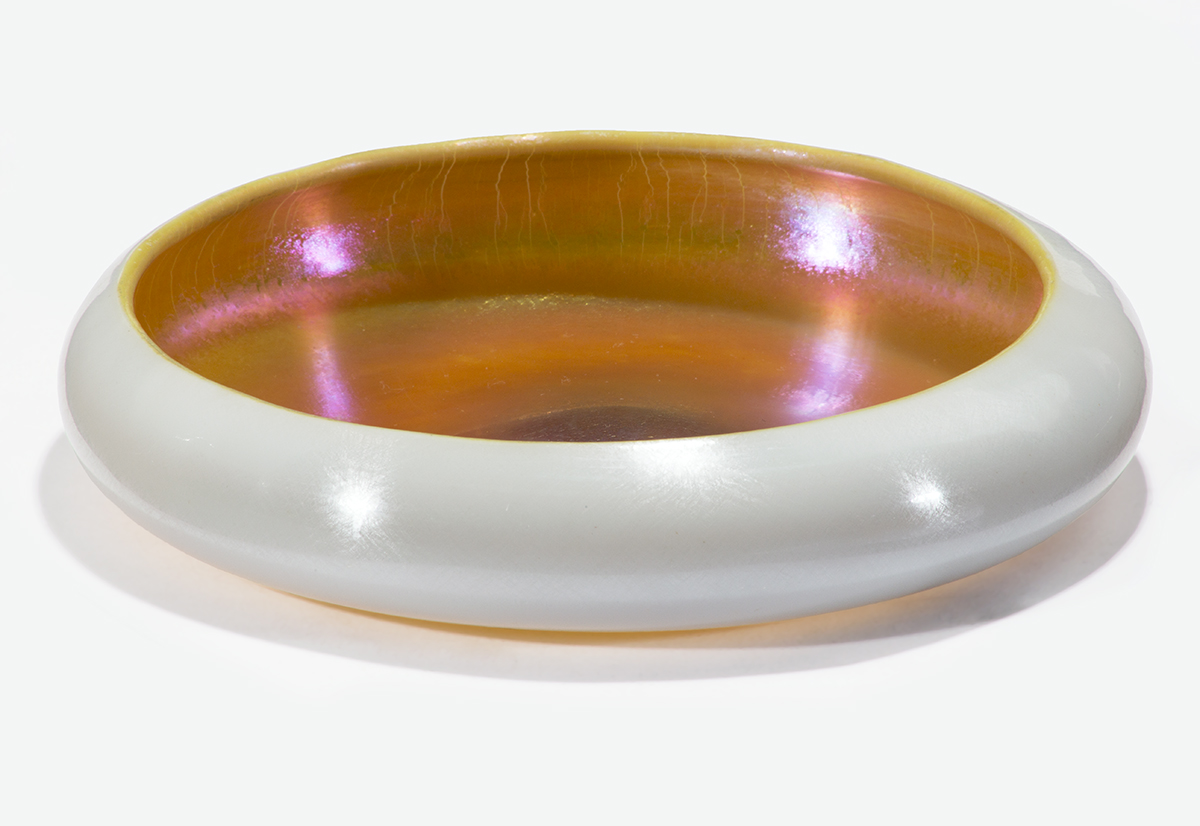 Tiffany also faced rivals in the American market. The most famous of these was the Steuben Glass Works, of Corning, New York, whose “Aurene” iridescent wares were almost indistinguishable from Tiffany’s own work. 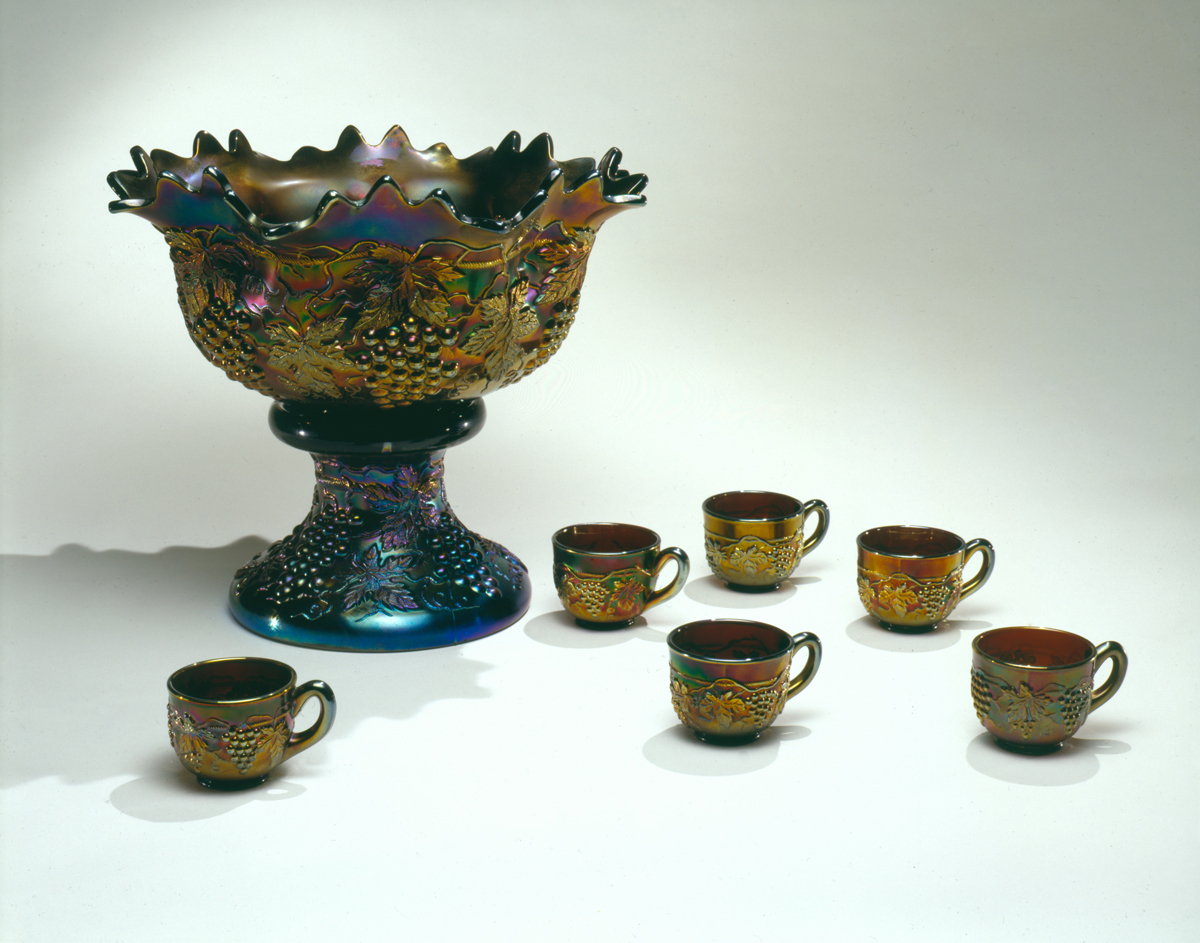 Iridescent glass was extremely popular in the years between 1890 and 1920. Late Victorian era Americans were obsessed with showing off their good taste and wealth to family, friends, and neighbors. Conspicuous consumption and ostentatious materialism were bedrock beliefs in Victorian society. Glass for decoration was an important part of the Victorian interior, whether one was wealthy or of modest means. Both Tiffany and Steuben products were expensive, so other glass companies filled the void with lower-end wares. The punch bowl set above was made by the Northwood Glass Company of Wheeling, West Virginia, and would have been a prized possession in a moderate-income home. Known by collectors as “Carnival Glass,” it is also referred to as “Poor Man’s Tiffany.” 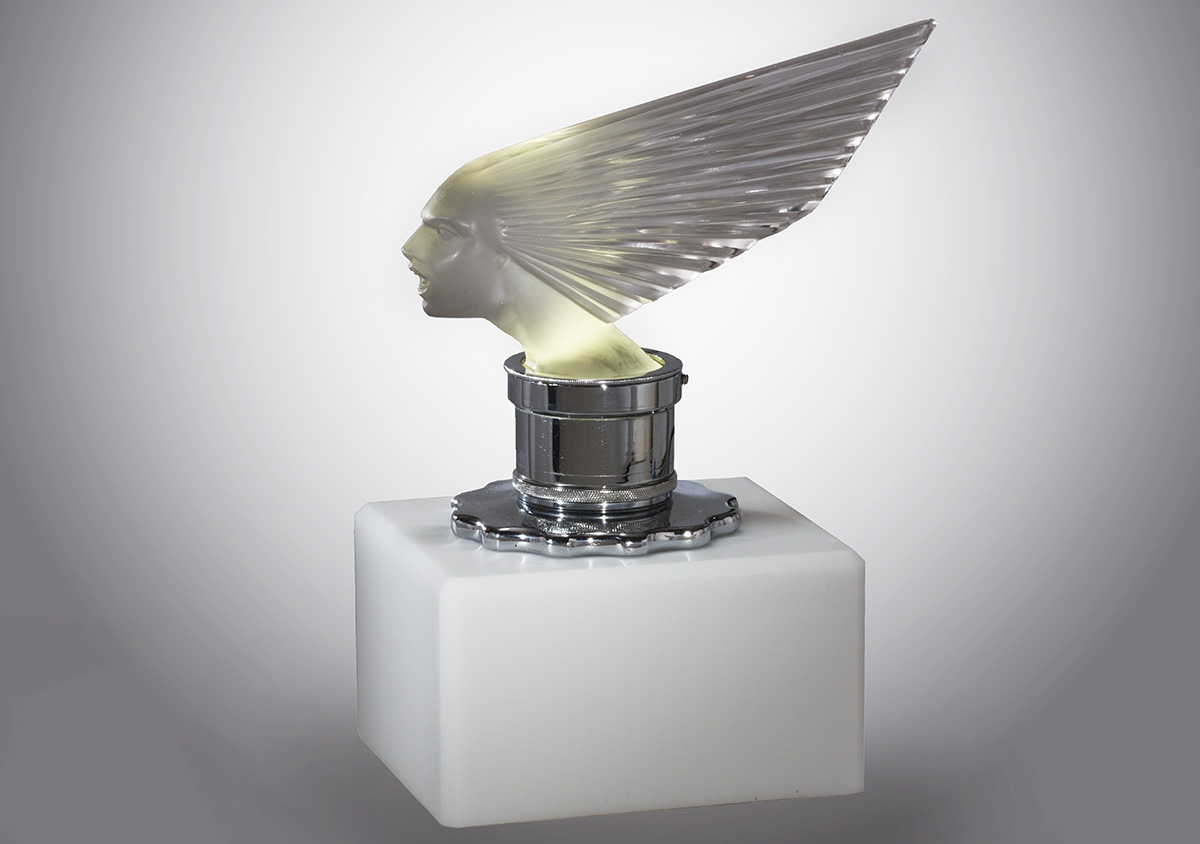 Following World War I, tastes began changing. The devastation of the war in Europe and the concurrent crumbling of monarchies and old social orders led society on both sides of the Atlantic to search for something new, something modern, and something different in their décor. By the mid-1920s, this led to a new, geometric style that we call Art Deco. Where Art Nouveau featured organic shapes seen in the work of Louis Comfort Tiffany and his contemporaries, Art Deco embraced the machine and geometric aesthetics. A good example of this is the “Victoire” hood ornament made by Rene Lalique, who had worked in the Art Nouveau style in the 1890s and early 1900s. Tiffany Studio’s work remained rooted in Art Nouveau and sales plummeted in the 1920s. The Great Depression was the end for Tiffany. As one scholar noted, Tiffany lamps, vases, and decorative objects became fodder for tag and rummage sales in the 1930s and 1940s. Throughout this period there were lingering influences of Tiffany’s windows and aesthetic, as this stained-glass White Castle Hamburger sign shows.

Following World War II, a flickering of interest in Tiffany’s artistry emerged in a number of museums. The Morse Gallery of Art in Winter Park, Florida, was one of the first museums to re-evaluate the contributions of Tiffany to American culture. In 1955, they organized Works of Art by Louis Comfort Tiffany, the first solo exhibition of Tiffany since his lifetime. Other museums, including Henry Ford Museum, began collecting Tiffany objects as early as 1954.

By 1959, the prestigious Museum of Modern Art in New York included Tiffany glass in their modern design gallery and produced a groundbreaking exhibit, Art Nouveau: Art and Design at the Turn of the Century. This reappraisal led to the beginning of new scholarship on Tiffany and a broader market for art glass among collectors from the 1960s onward.

The Revival of Tiffany in Popular Culture 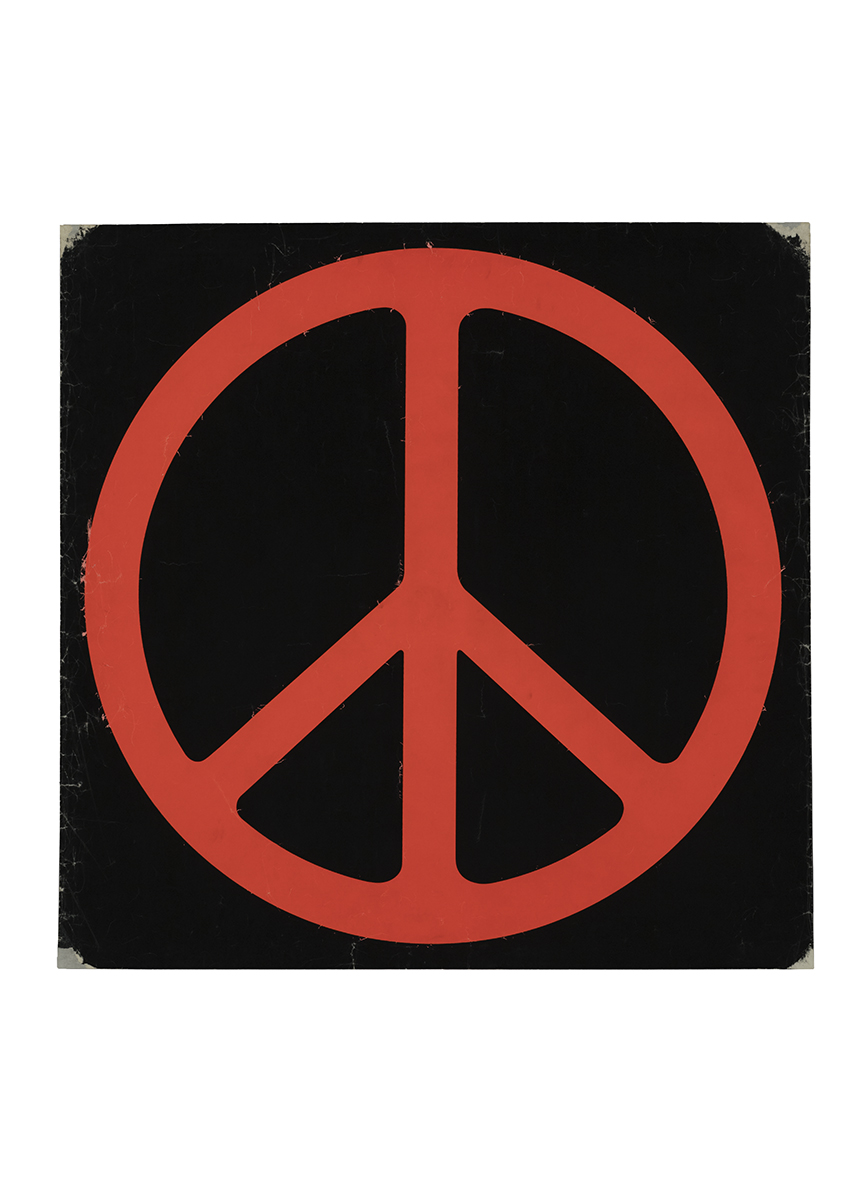 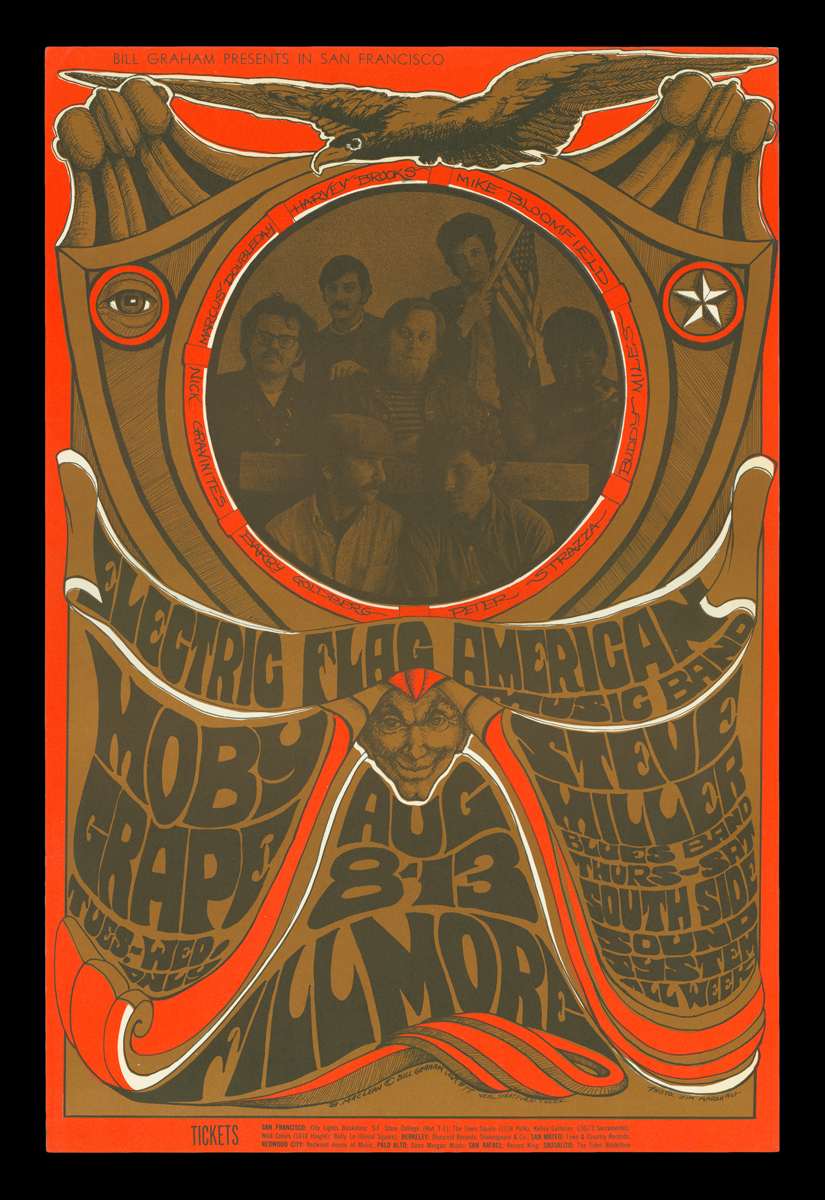 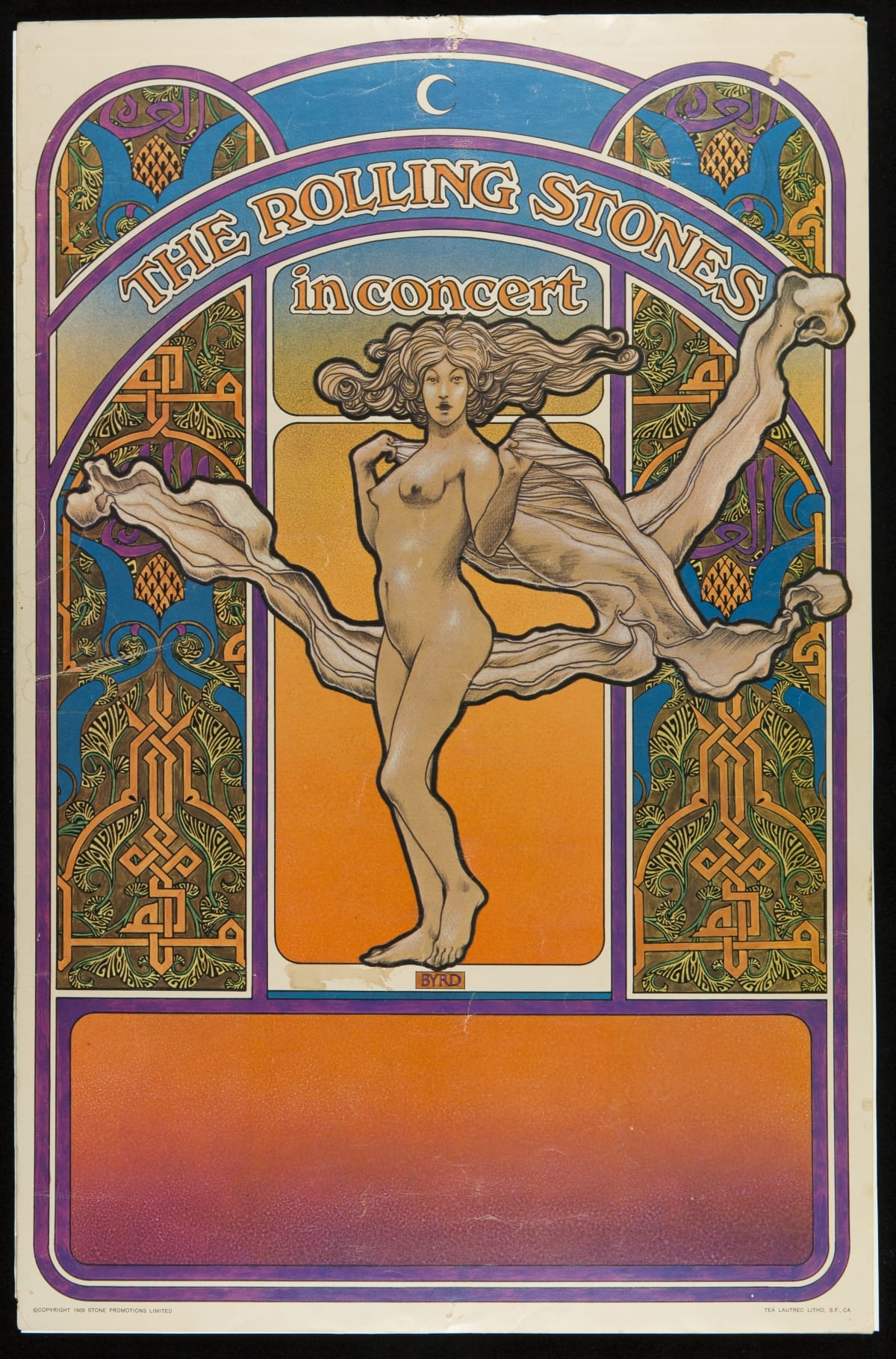 The revival of interest in Tiffany’s work and in Art Nouveau in general comes into vogue through the counterculture of the 1960s. Many of this younger generation were called “hippies,” who sought out new directions in material culture. In this they referenced historicism, Victorianism, and just about anything that rebelled against the prevailing minimalism of mid-century modernism. So the highly decorative and organic qualities of Favrile glass appealed to them. 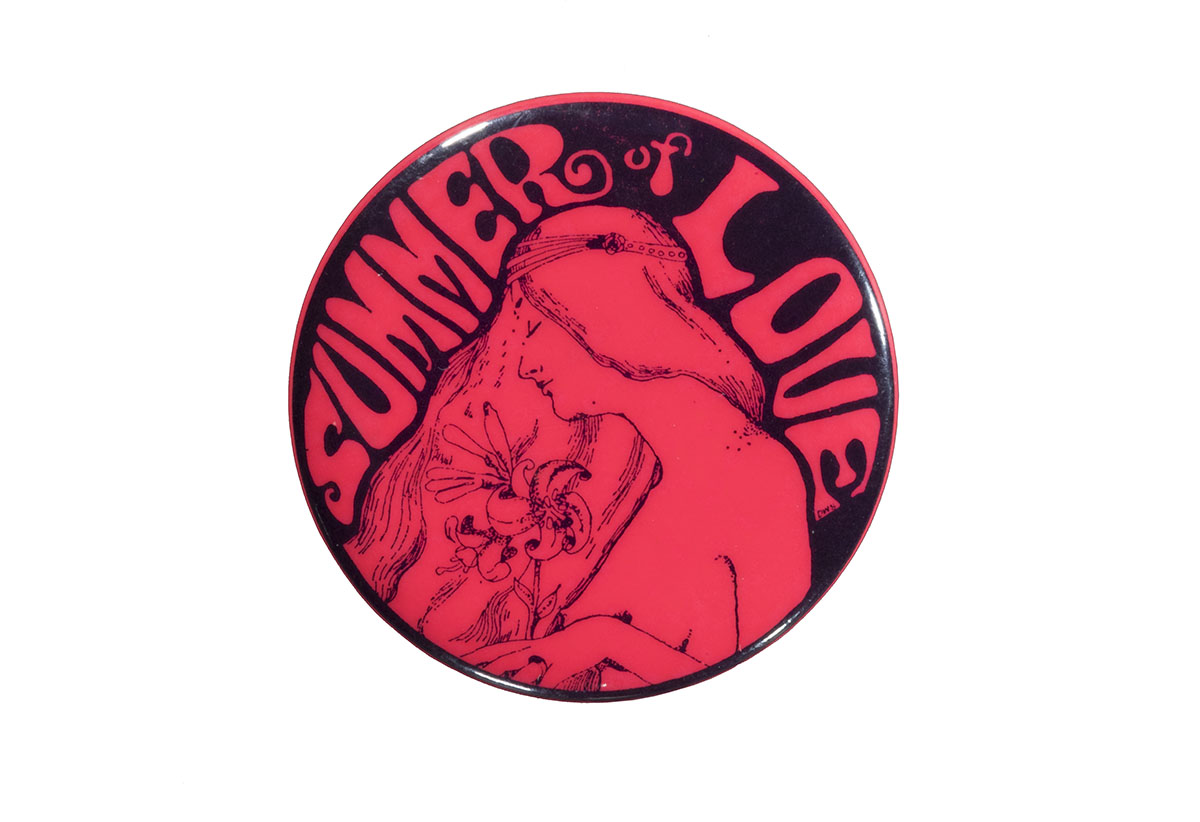 Their self-described haven was in San Francisco, which became famous for its “Summer of Love” in 1967. This button uses calligraphic script with a female figure drawn in an Art Nouveau style. 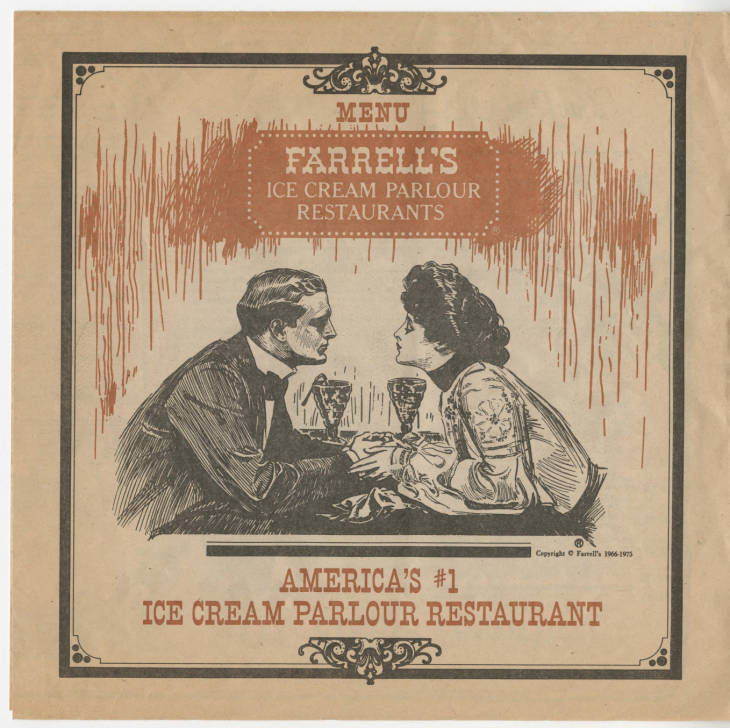 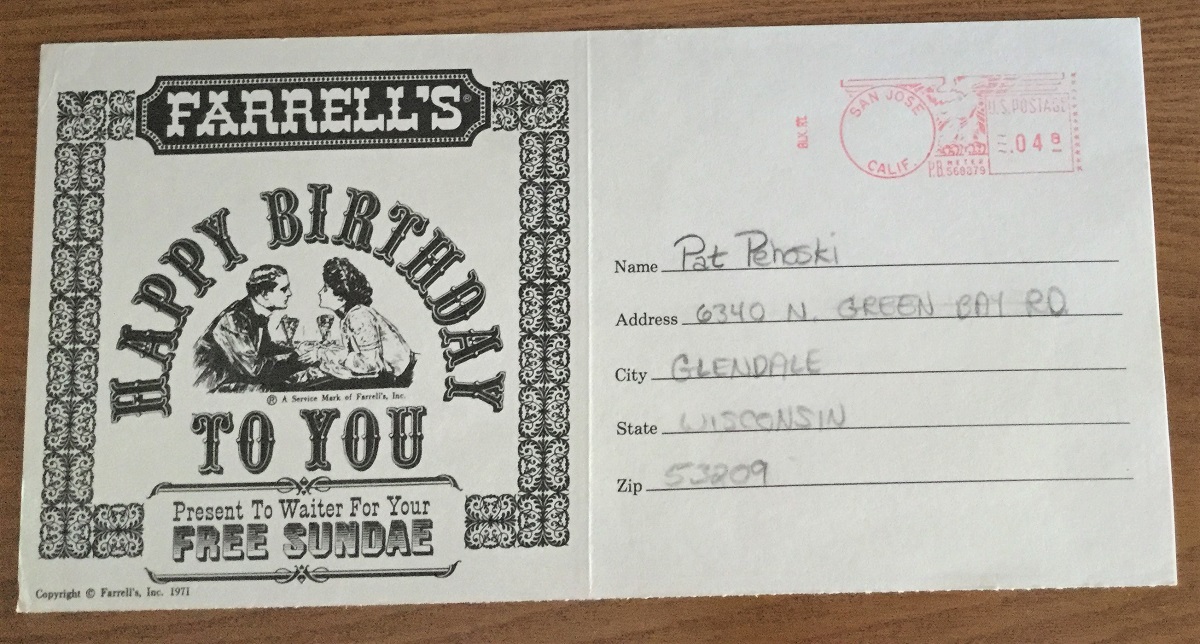 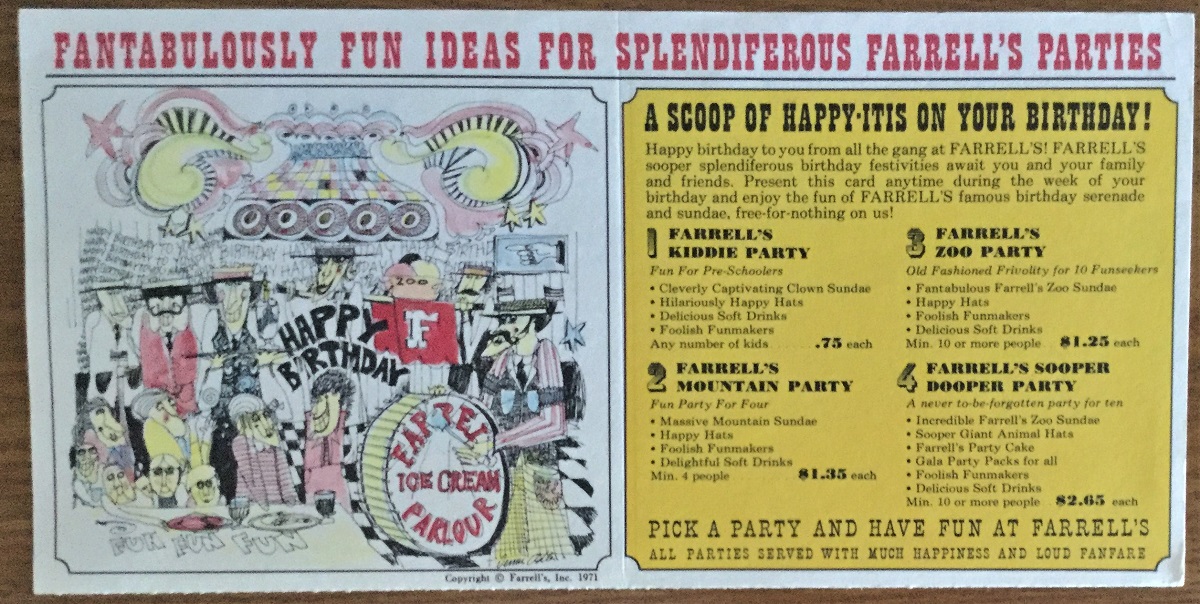 As the 1970s dawned, the sense of nostalgia evoked by “hippie” culture began to come into mainstream material culture. One of the first ways this occurred was through “old-fashioned” ice cream parlors. One of the first of these to become mainstream was Farrell’s Ice Cream Parlour Restaurant. Founded in Portland, Oregon, in 1963, Farrell’s spread to approximately 120 locations by 1975. Each restaurant was designed to look like the 1910 era, complete with Tiffany hanging lamps and waiters and waitresses in period costumes. 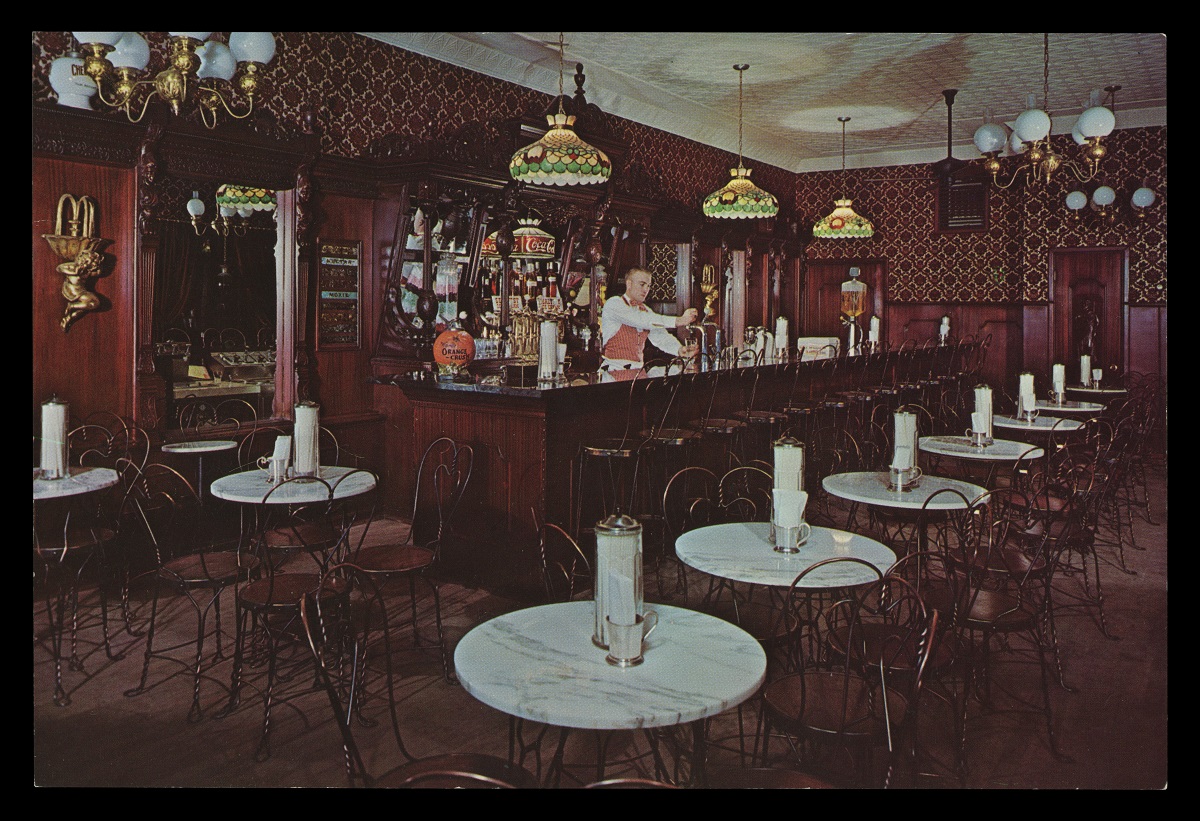 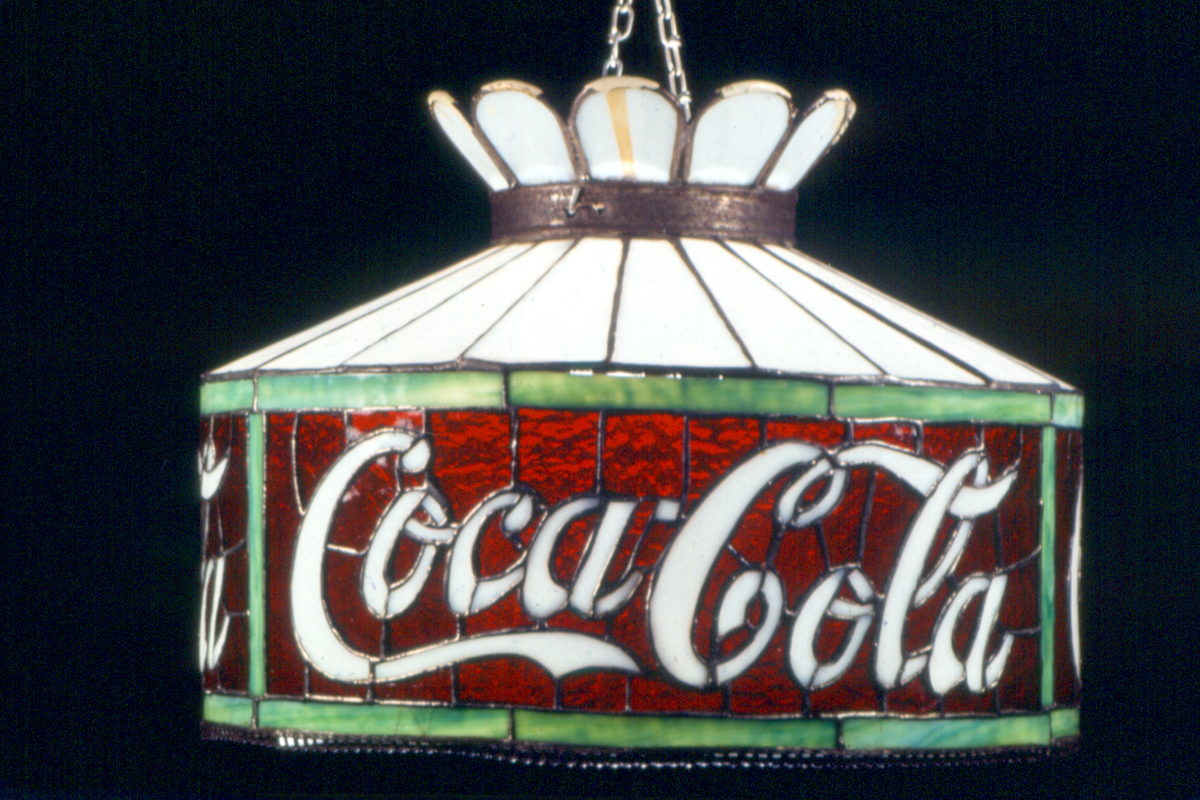 The postcard image above of Eurich’s Ice Cream parlor, formerly located in Dearborn, Michigan, shows an iconic view of the “old-fashioned” look, complete with a leaded hanging pendant Coca-Cola lamp, now in our collections.

By the early 1970s, Tiffany became more than a name—it became a style. At this time, “Tiffany” lamps were at the height of their popularity (like, for example, this lamp in the Tiffany style, made by Loevsky and Loevsky, about 1975). 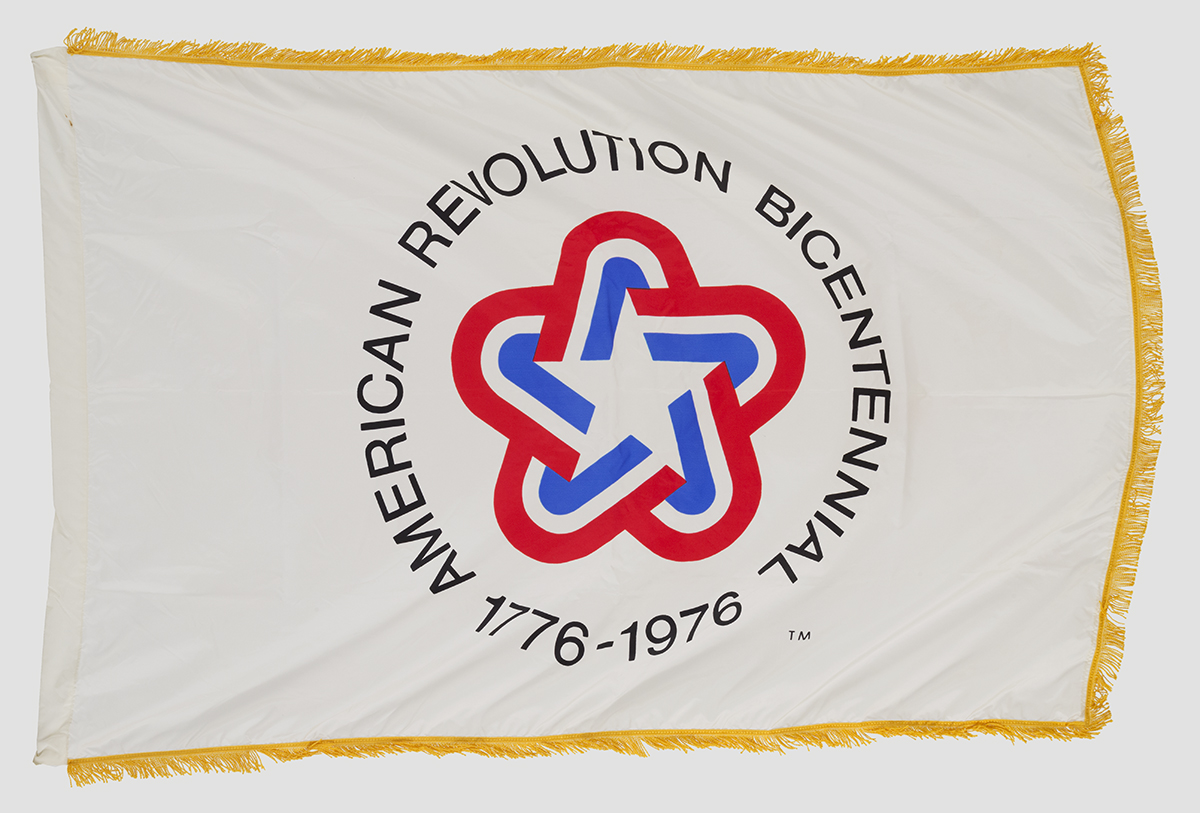 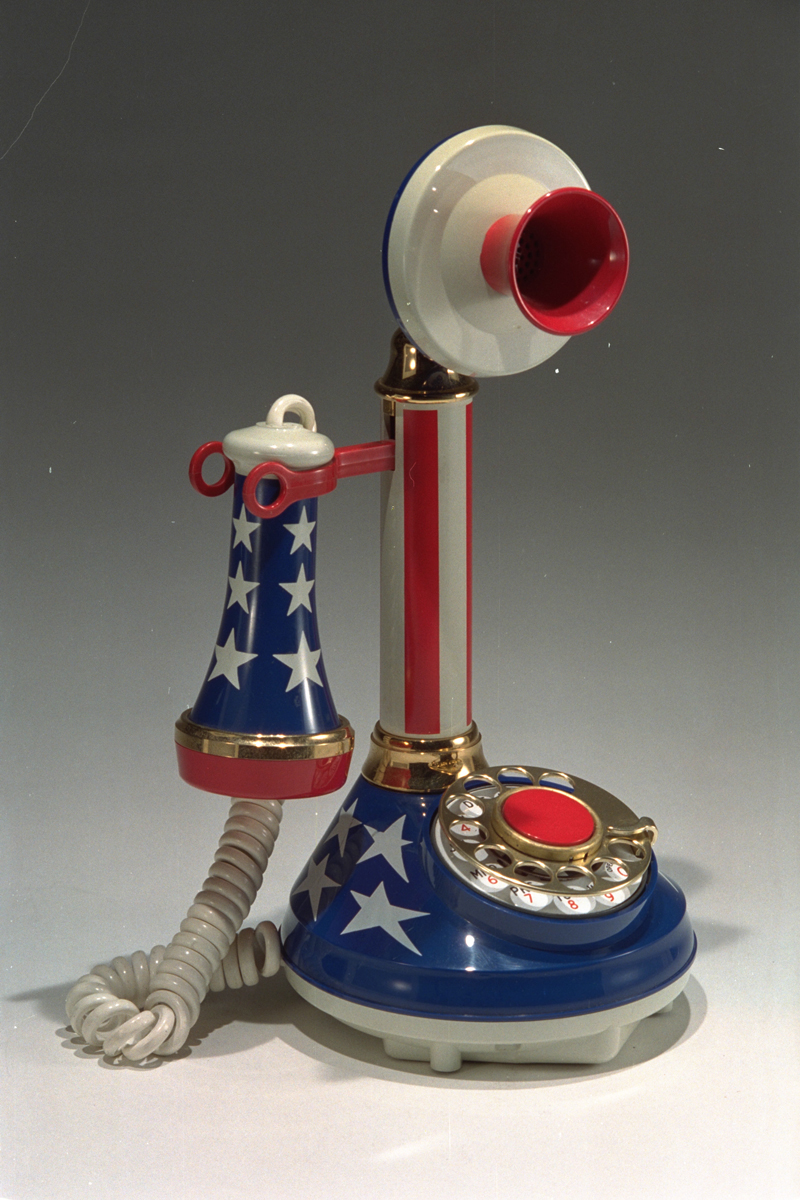 With the United States Bicentennial in 1976, Americans became even more enamored with the nostalgia of the American past. This led companies like Wendy’s restaurants to emphasize their “old-fashioned” hamburgers and fill their early restaurants with bent-wood chairs and Tiffany-style stained glass lighting. Throughout the early 1980s, this nostalgia continued, although over the course of the decade, it began to wane.

What Happened to the Tiffany Style? 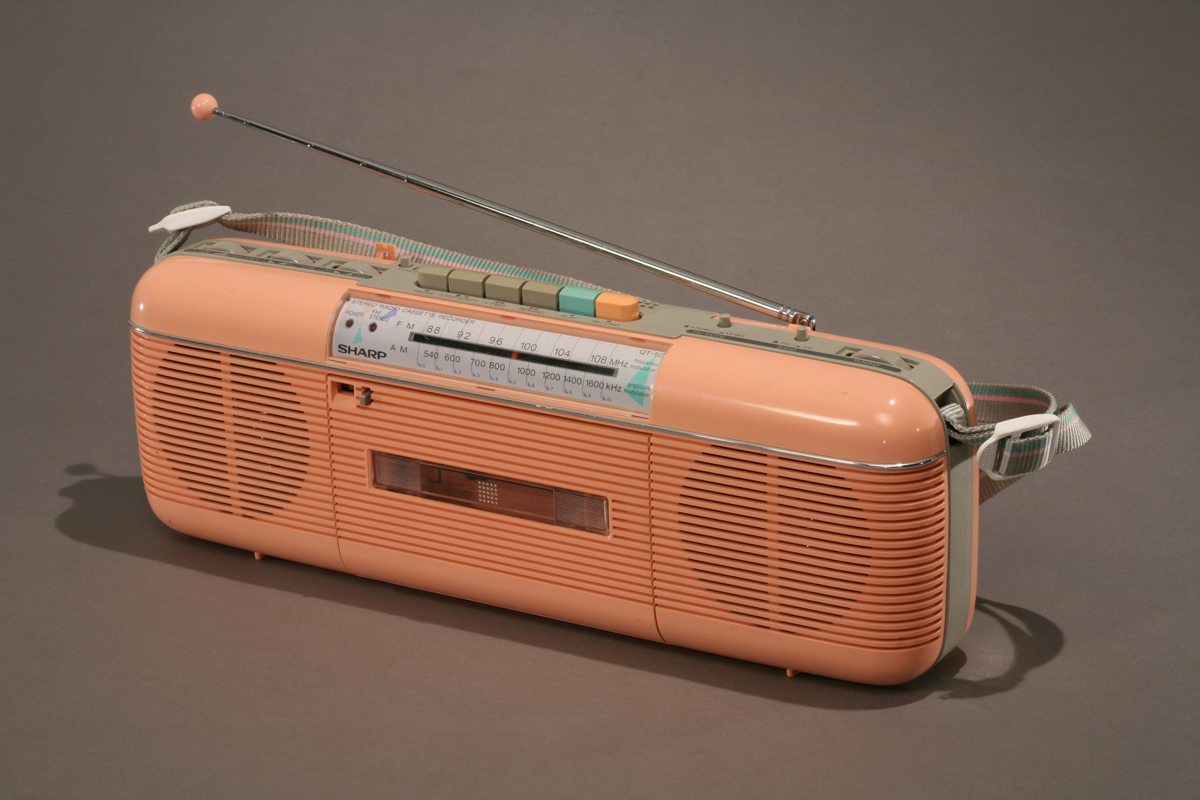 By the late 1980s, the Baby Boom generation that created the nostalgia fad of the 1970s had furnished their homes and were aging, while a new generation, seeking new decorative influences, came of age. This younger demographic found the “old-time” nostalgia of their elders somewhat stifling, preferring new sources, such as this Sharp brand radio cassette player, which derives its historical sources from the 1930s and 1950s. In turn, this trend known as “new age” or postmodernism, came and went by the early 1990s, as tastes changed again with generations.