Boomboxes at The Henry Ford 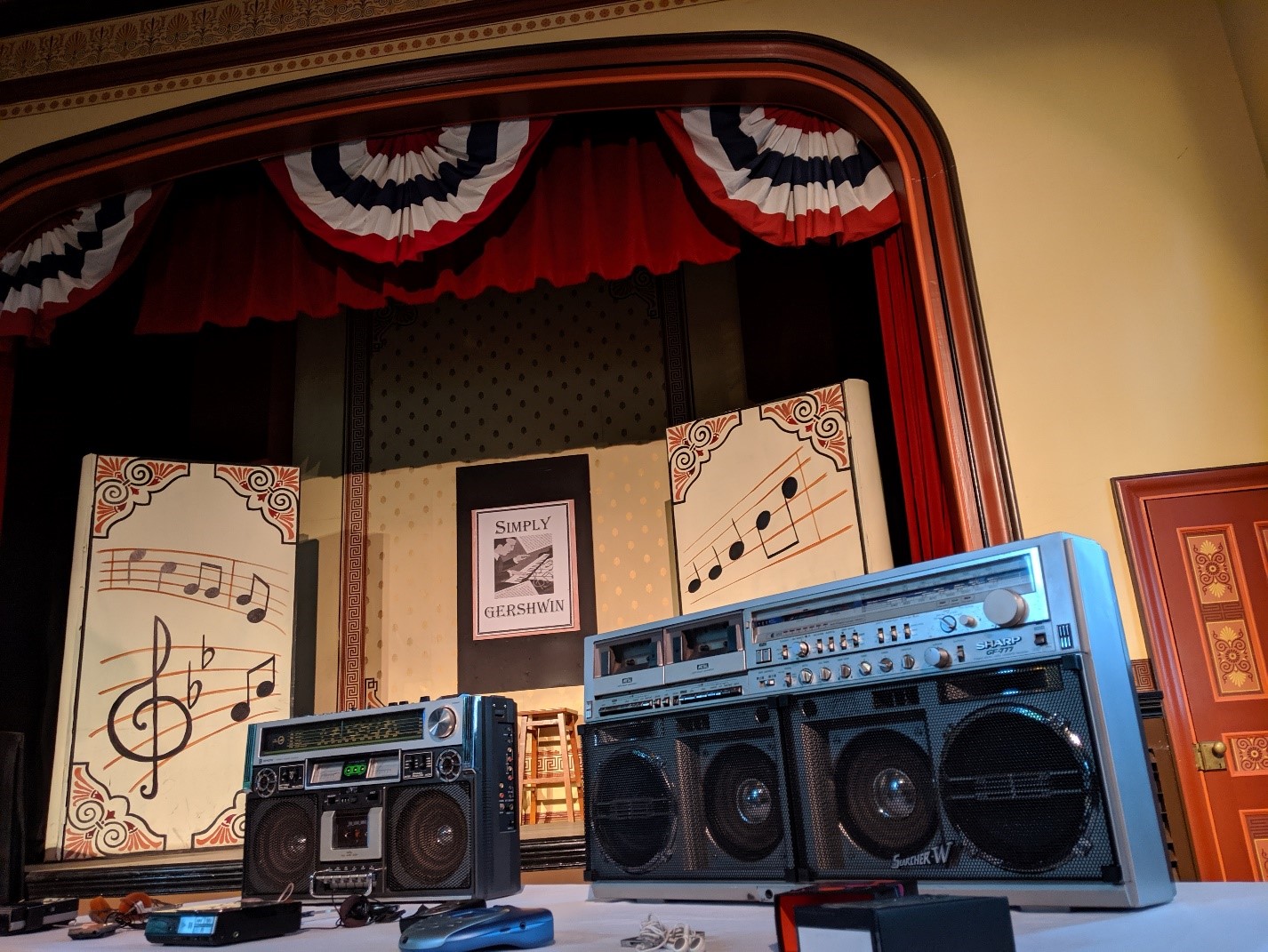 An image from the set of The Henry Ford’s Innovation Nation.

For many people—especially those who grew up between the decades of the 1970s through the 1990s—the sight of a boombox often prompts the thought: “I wonder how heavy that thing would feel, if I carried it around on my shoulder?” Boomboxes are infused with the promise of human interaction, ready for active use—to be slung from arm to arm, hoisted up on a shoulder, or planted with purpose on a park bench or an empty slice of asphalt in a city somewhere.

Here at The Henry Ford, we recently acquired a trio of classic boomboxes to document stories about the growth of mobile media and the social communication of music in American culture.

The Norelco 22RL962 was developed in the mid-1960s by the Dutch company, Philips. A combination radio and compact cassette player, it had recording and playback functions as well as a carrying handle. While it was generally thought of as the first device that could be accurately called a “boombox,” the Norelco failed to gain mass traction. The core issue wasn’t due to poor performance from a technological standpoint, but rather the bad sound quality of the tapes. In 1965, the American engineer Ray Dolby invented the Dolby Noise Reduction system, which led to clean, hiss-free sound on compact cassette tapes. His invention sparked a revolution in hi-fi cassette audio. 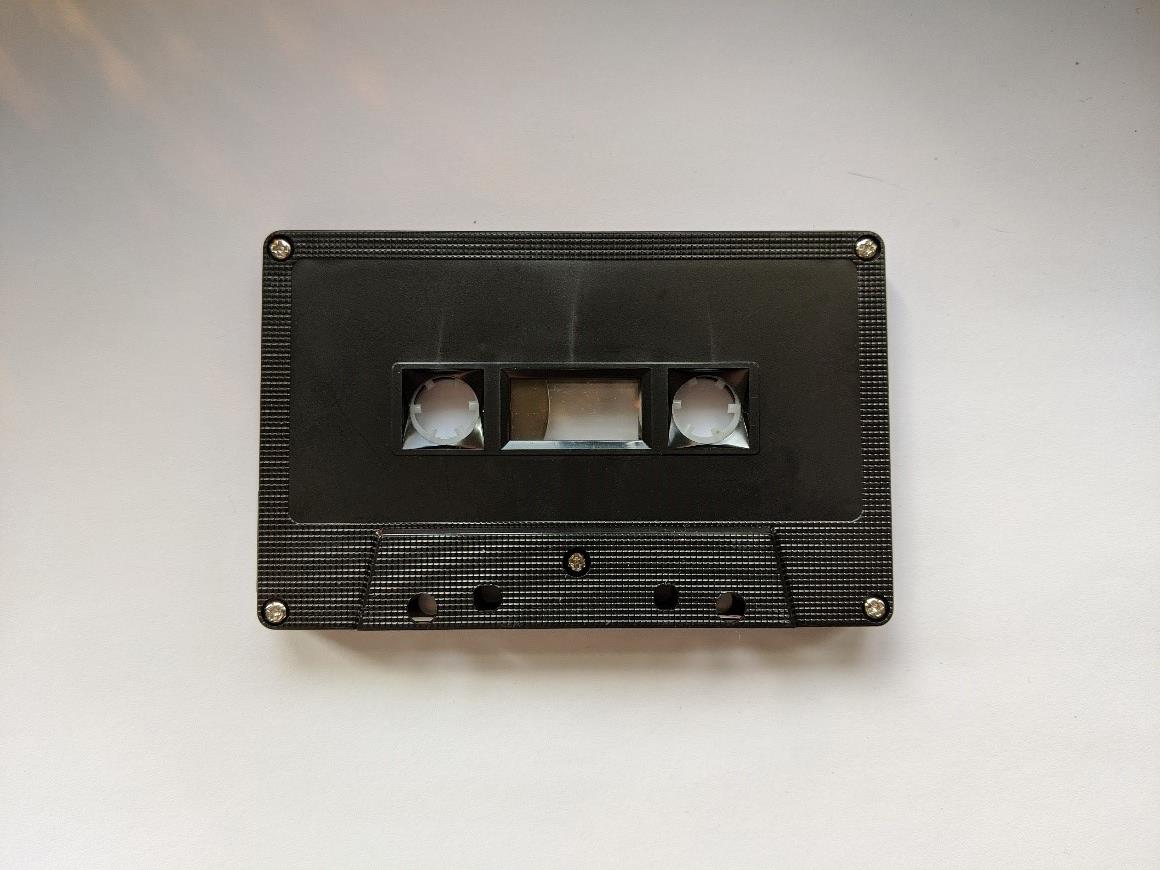 In the early 1970s, Japanese manufacturers began to make advancements in boombox technology as an outgrowth of modular hi-fi stereo components. Living spaces in Japan were typically small, and there was a desire to condense electronics into compact devices without losing sound quality.

Later that decade, the improved boombox made its way to the United States, where it was embraced by hip hop, punk, and new wave musicians and fans—many of whom lived in large cities like New York and Los Angeles. In many ways, the boombox was a protest device, as youth culture used them to broadcast politically charged music in public spaces. 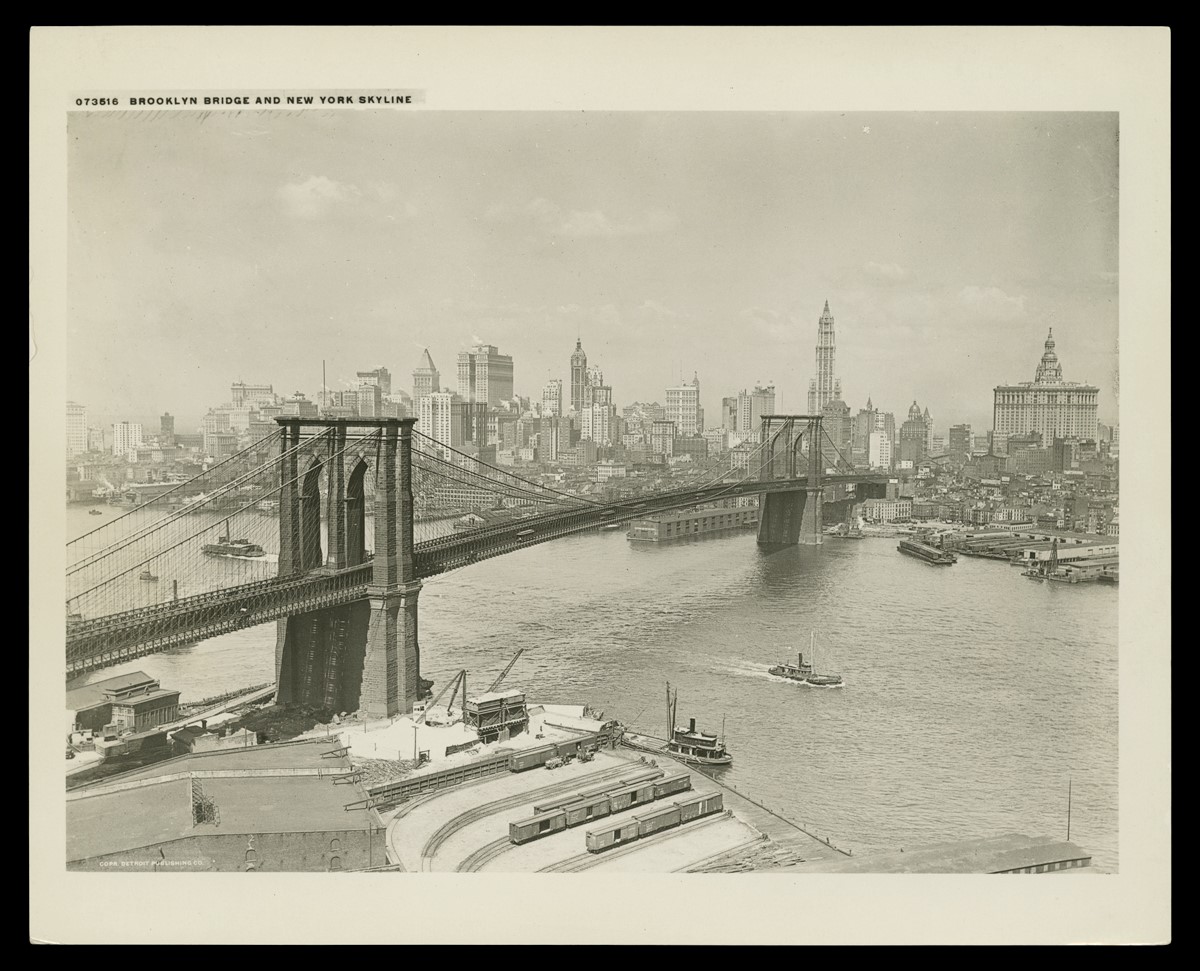 An early image of the Brooklyn Bridge and New York Skyline. THF113708

Boomboxes literally changed the sonic fabric of cities, but this effect was divisive. By the mid-1980s, noise pollution laws began to restrict their use in public. The golden years of the boombox were also short lived due to the rising popularity and affordability of personal portable sound devices like the Sony Walkman (and later, the MP3 player), which turned music into a private, insular experience. 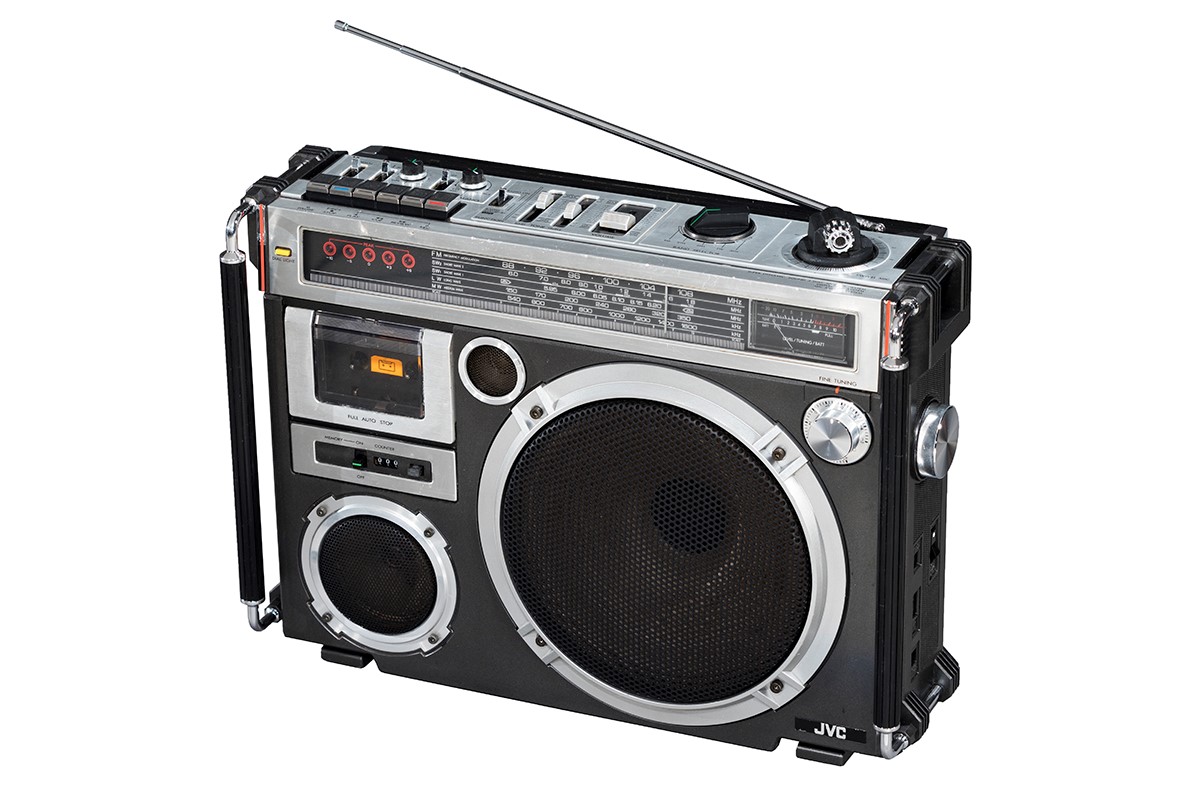 This boombox was built for the street, and it is meant to be played loud. Its design is rugged, with a carrying handle and protective “roll bars” in case it is dropped. Many classic photos from the early years of hip-hop depict fans and musicians carrying the El Diablo around cities and on the subway in New York.

The JVC RC-550 is a member of what sound historians refer to as the “holy trinity” of innovative boomboxes. While the origins of its “El Diablo” nickname are uncertain, it is believed to stem from the impressive volume of sound it can transmit—or its flashing red sound meters. It is a monophonic boombox, meaning that it has one main speaker and it is incapable of reproducing sound in stereo. A massive offset 10-inch woofer dominates its design, coupled with smaller midrange and tweeter speakers. As with most boomboxes of this time, bass and treble levels could be adjusted.

An input for an external microphone led to the RC-550 being advertised as a mobile personal amplifier system. Brochures from the Japanese version show the boombox being used by salesmen to amplify their pitches in front of crowds, as a sound system in a bar, and by a singing woman accompanied by a guitarist. Recording could take place directly through the tape deck, or through the microphone on top, which could be rotated 360-degrees. 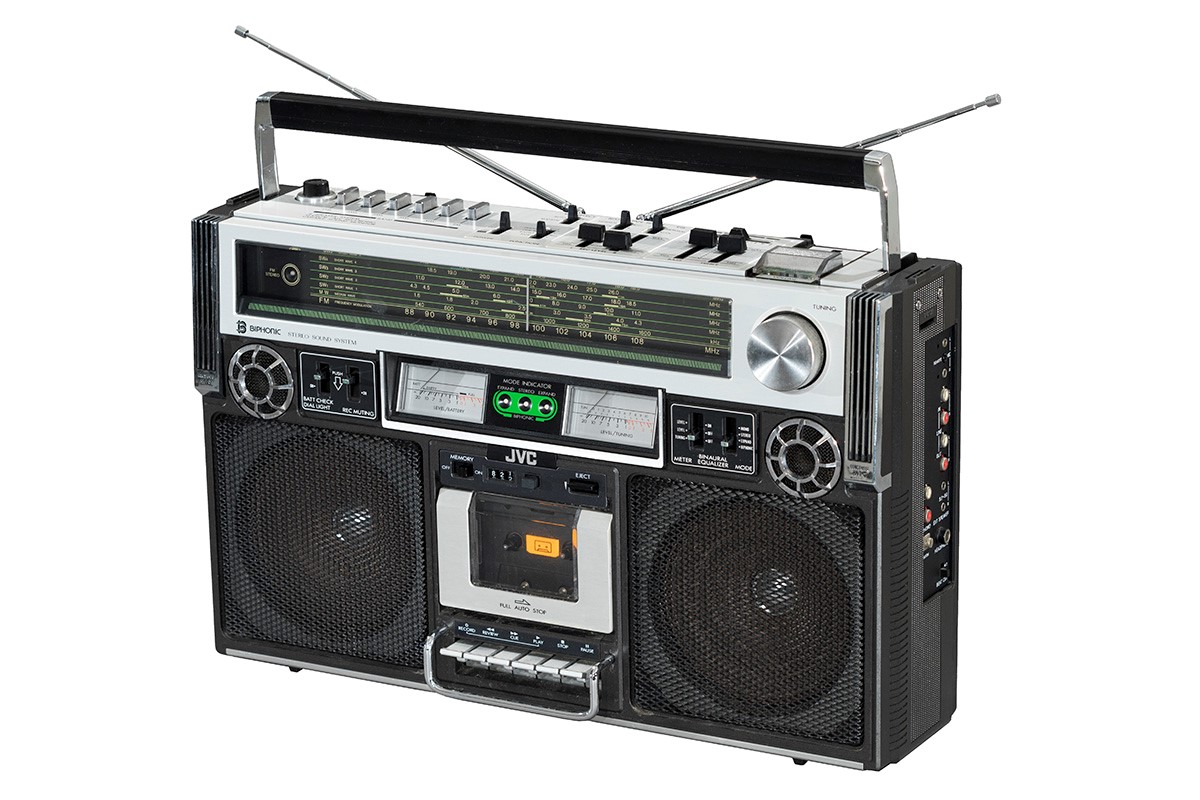 JVC 838 Biphonic Boombox
The JVC 838 is important for its transitional design. It was one of the first boomboxes to incorporate the symmetrical arrangement of components that would become standard in 1980s portable stereos: visually balanced speakers, buttons and knobs, and a centered cassette deck.

As boombox designs evolved, they began to include (almost to the point of parody) sound visualization components such as VU meters and other electronic indicators. In many cases, these were purely for visual effect rather than function. The needle VU meters on the JVC 838 however, were accurate.

A unique feature of the JVC 838 boombox is its “BiPhonic” sound—a spatial stereo feature that creates a “being there” effect through its binaural speaker technology, resulting in “three-dimensional depth, spaciousness, and pinpoint imaging.” The box also includes an “expand” effect to widen the sound even further. 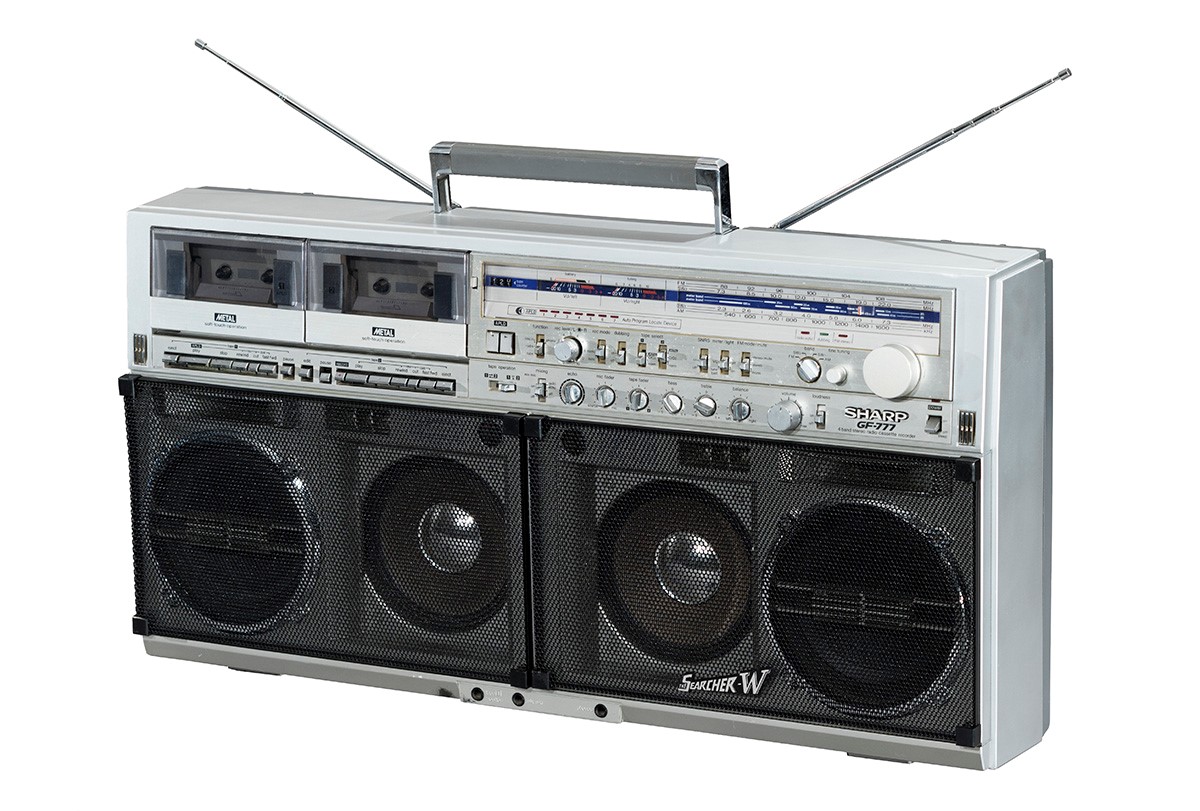 Sharp “Searcher” GF-777
The Sharp “Searcher” GF-777 is an exercise in excess. Often referred to as the “king of the boomboxes,” it was also one of the largest ever produced. Weighing thirty pounds (minus ten D-cell batteries) and measuring over one foot tall and two feet wide, it took a certain amount of lifestyle commitment to carry this device around a city.

The Searcher played a key part in the performance and representation of hip-hop music. Its six speakers include four woofers individually tuned for optimal bass transmission and amplitude. It appeared in a photograph on the back cover of the first Run-DMC album, found its way into several music videos, and was photographed alongside breakdancing crews.

Many people used this boombox as an affordable personal recording studio. Two high quality tape decks opened the possibility for people to create “pause tapes” – a way of creating looped beats through queuing, recording, rewinding, and repeating a short phrase of music. A microphone input and an onboard echo effect meant people could rap or sing over top of music backing tracks.

Much like Thomas Edison’s phonograph, the boombox came full circle, allowing people to record and play back music for public and communal consumption. And while they may not mesh with our ideas of what a “mobile” device is in our age of smartphones and streaming services, their reach permeated popular culture in the 1970s well into the 1990s. Sometimes acting as portable sound systems, sometimes used as affordable personal recording studios—carrying a boombox through the streets (wherever you happened to live) was as much a fashion statement and lifestyle choice as it was a celebration of music and social technology.