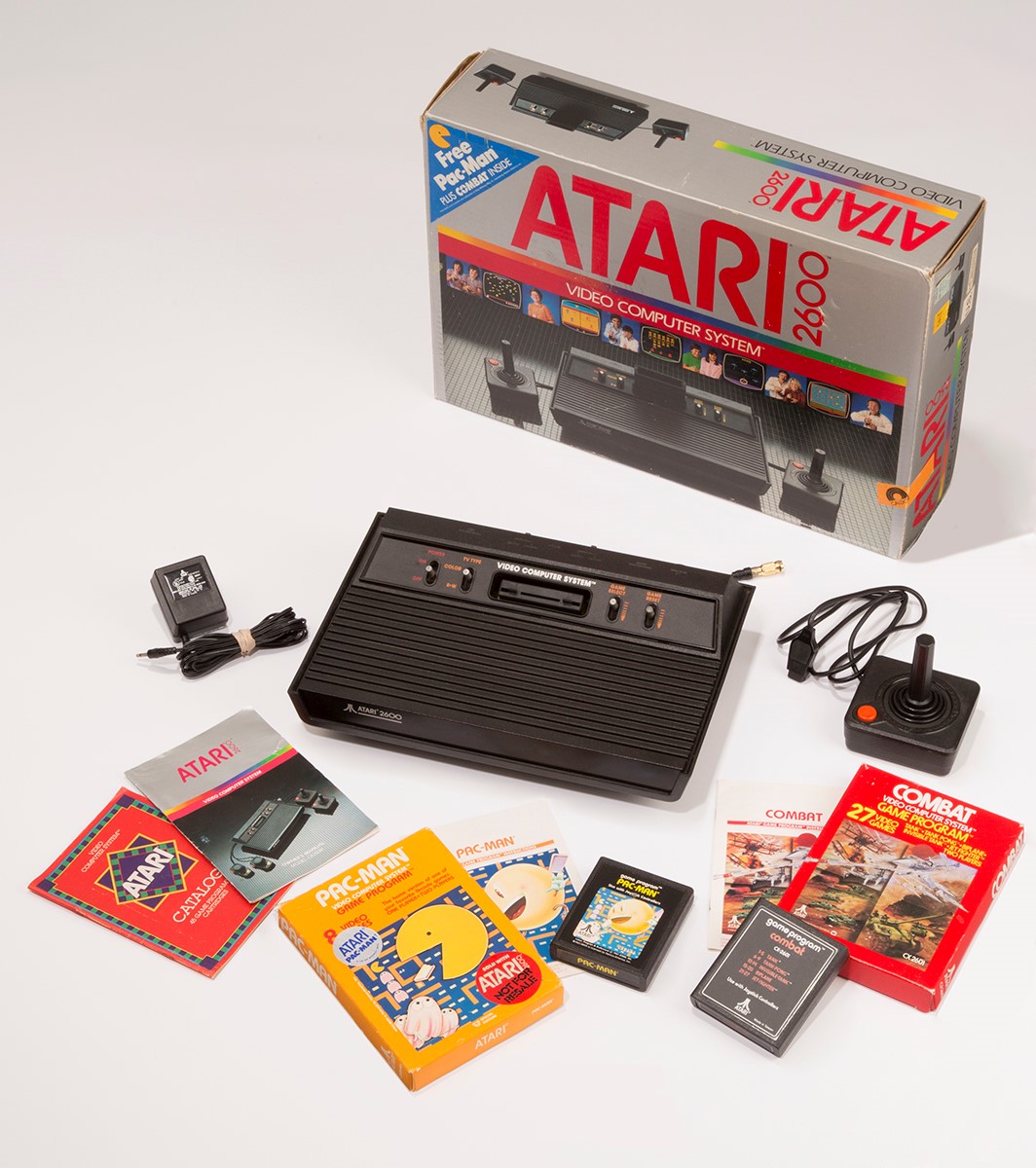 The familiar silver packaging for the “Black Vader” Atari 2600 was created by Evelyn Seto, who led the Atari design team with John Hayashi. THF160364

Cardboard boxes printed in bold colors: shimmering silver, blazing orange, primary blue, circus purple—hot pink. Overlaid with white and yellow Bauhaus typography announcing the contents: Centipede, Breakout, Space Invaders. Inside the box, a black plastic cartridge that holds the promise of video game entertainment, all from the comfort of home. Games played while sitting cross-legged on the floor. Later, aching hands from hours of play on a square, non-ergonomic, one-button joystick. No quarters necessary. By the fall of 1977, there was no denying the fact that the arcade was successfully finding its way into the living room.

The Atari Video Computer System (later sold as the Atari 2600) changed the gaming industry. Earlier systems like the Magnavox Odyssey, Home PONG, and the Fairchild System F were available in the early 1970s, but the remarkable success of the Atari 2600 defined a “second generation” of home consoles, selling over 30 million units between 1977 and 1992.

The number of games available for the 2600—taking into account Atari and Sears releases as well as those by third-parties like Activision and Imagic—finds us looking at approximately 550 unique titles. Several games within this vast library include important contributions made by women.

Female employees were not uncommon at the company. Carol Kantor became the first market researcher at a video game company, ever. Wanda Hill drew the circuit diagrams for Asteroids. Judy Richter worked as a packaging designer and production manager for a decade, through multiple leadership transitions. The people working on the assembly lines populating the circuit boards for arcade games were almost all women. Evelyn Seto supervised the design team, inking the original three-pronged “Mt. Fuji” logo and creating the shelf-appealing silver packaging for the Atari 2600. 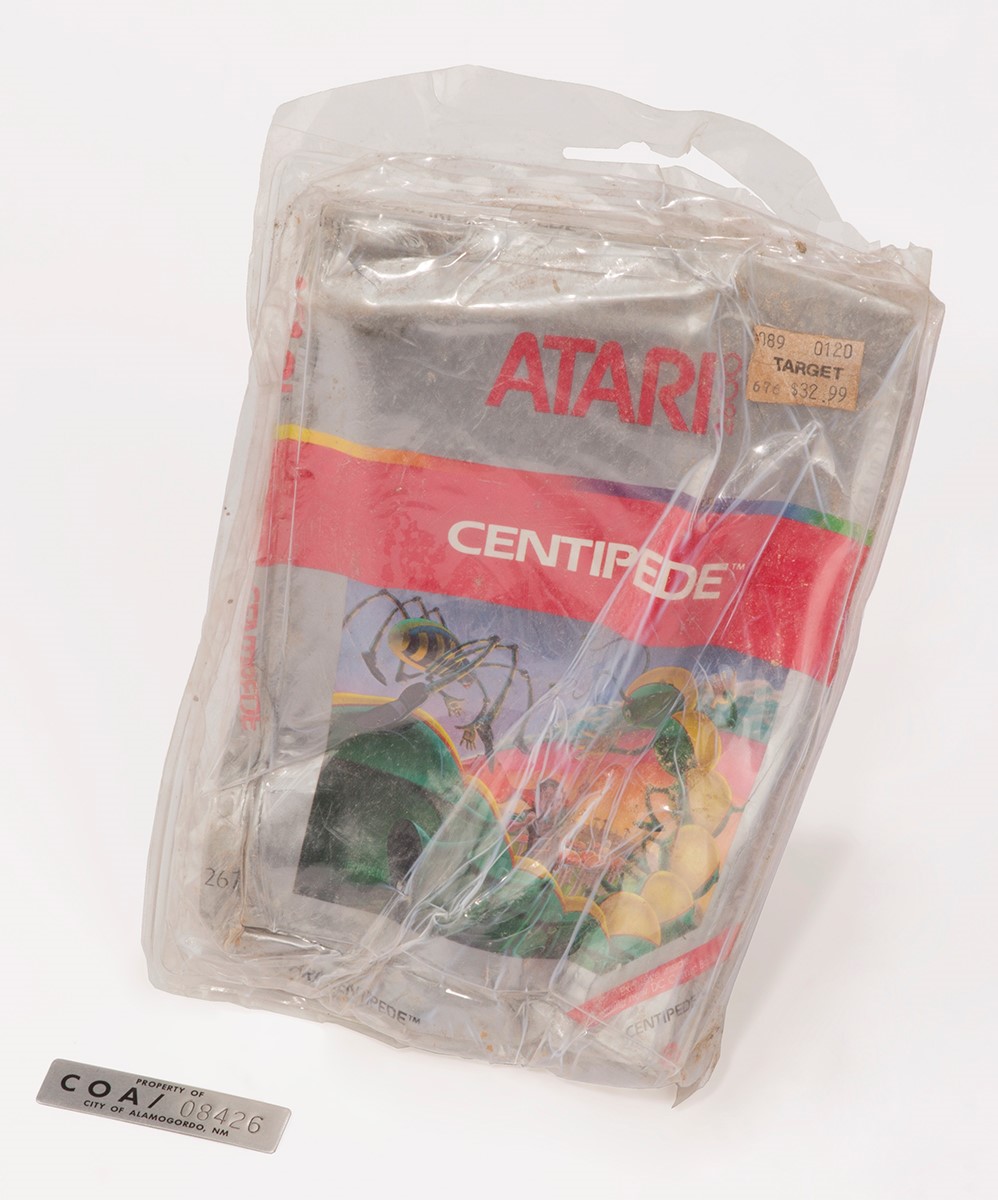 Dona Bailey and Ed Logg’s 1980 arcade version of Centipede was translated as a “port” for the Atari 2600 in 1982. In 2013, this cartridge was excavated from the “Atari Tomb” located in an Alamogordo, New Mexico landfill. THF159973

The scales were not exactly balanced in terms of gender equality within Atari’s engineering staff, but take for instance the work of Dona Bailey, programmer of the arcade version of Centipede (1980). Not only was she the first female programmer to design an arcade game, but her collaboration with Ed Logg led to the creation of one of the most iconic video games of all time. 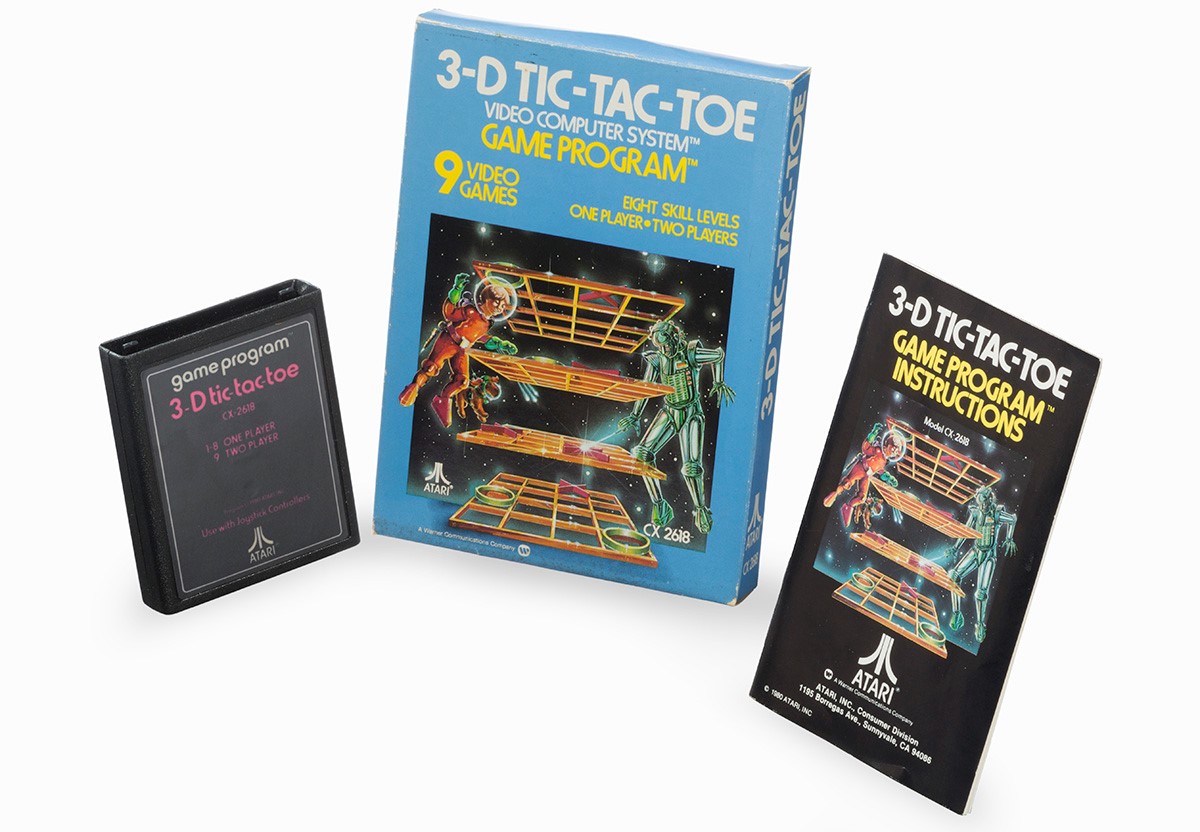 Dona Bailey’s time in the “coin-op” division at Atari overlapped with Carol Shaw’s work for the “cart” division. In 1977, Shaw graduated from the University of California, Berkeley’s Computer Science program, and was hired as the first female programmer at Atari in August 1978. When she completed her first cartridge game that year—3D Tic-Tac-Toe—she effectively became one of the women to work in the professional video game industry. 3D Tic-Tac-Toe is an abstract strategy video game based on a game called Qubic, which was originally played on room-sized computers in the mid-1950s.

In the 1970s and 80s, the exterior graphics of a coin-op console or the illustration on a game’s cardboard box were often a player’s first exposure to a game. Typically, the vibrant and dynamic graphics promoting a game were light years beyond the pixelated game that showed up on the screen. Nonetheless, Evelyn Seto from Atari’s graphics team once said: “The romance of the game was told in the box artwork.”

And what could be more intriguing than a woman in space with her spacesuit-clad dog competing against a robot with laser-powers?  The illustrations on 3D Tic-Tac-Toe’s box were painted by Susan Jaekel, who became known for her illustrated textbooks and cookbooks, as well as the packaging for Atari’s Adventure, Circus, Basic Math, and others. On 3D Tic-Tac-Toe, Jaekel collaborated with Rick Guidice to create the four grids in the design; Guidice is well-known for his 1970s illustrations of space colonies for NASA’s Ames Research Center.

In 1978, Shaw also programmed Video Checkers and Super Breakout (with Nick Turner). In 1982, Shaw left Atari to work for Activision, where she created her most celebrated game: River Raid. 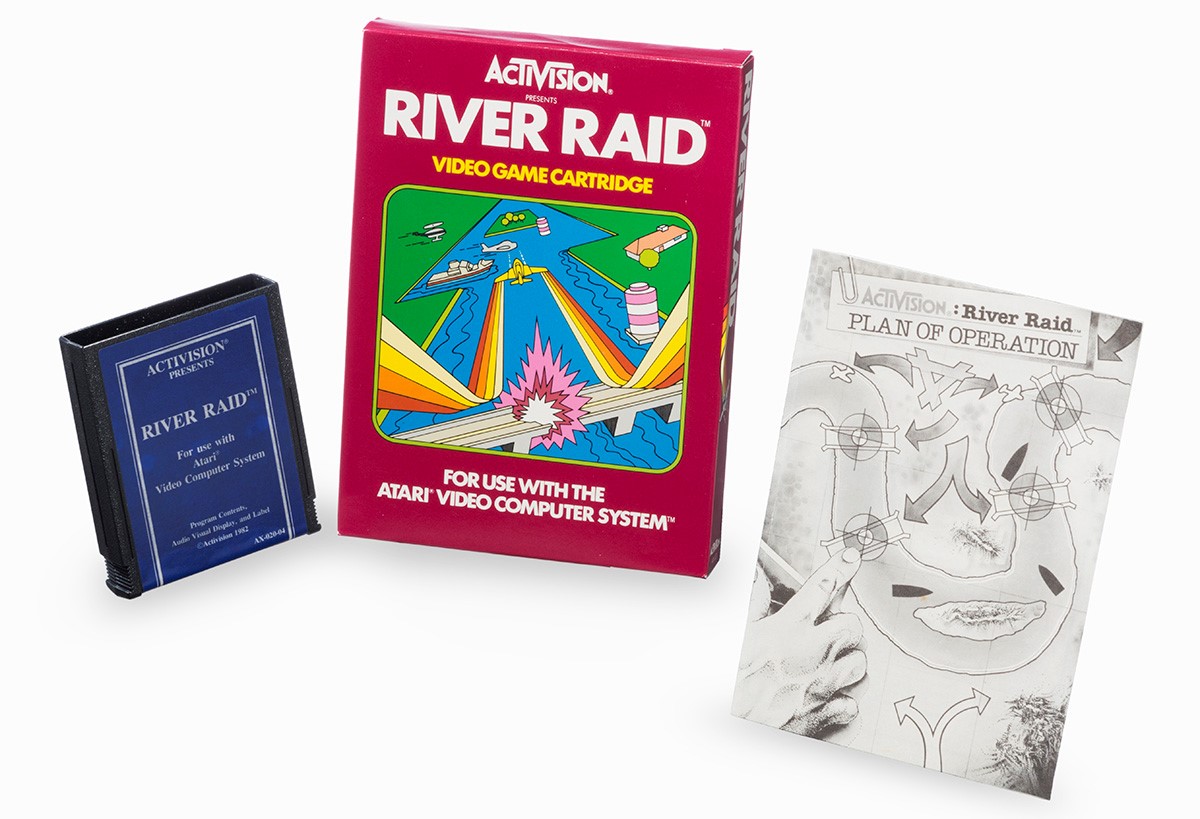 River Raid is a top-down-view scrolling shooter video game. Players move a fighter jet left to right to avoid other vehicles, shoot military vehicles, and must refuel their plane to avoid crashing. The game was pioneering for its variation in background landscape. Whereas most games repeated the same background, Shaw found a way to create a self-generating algorithm to randomize the scenery.

In an interview, Carol Shaw spoke of how “Ray Kassar, President of Atari, was touring the labs and he said, ‘Oh, at last! We have a female game designer. She can do cosmetics color matching and interior decorating cartridges!’ Which are two subjects I had absolutely no interest in…” 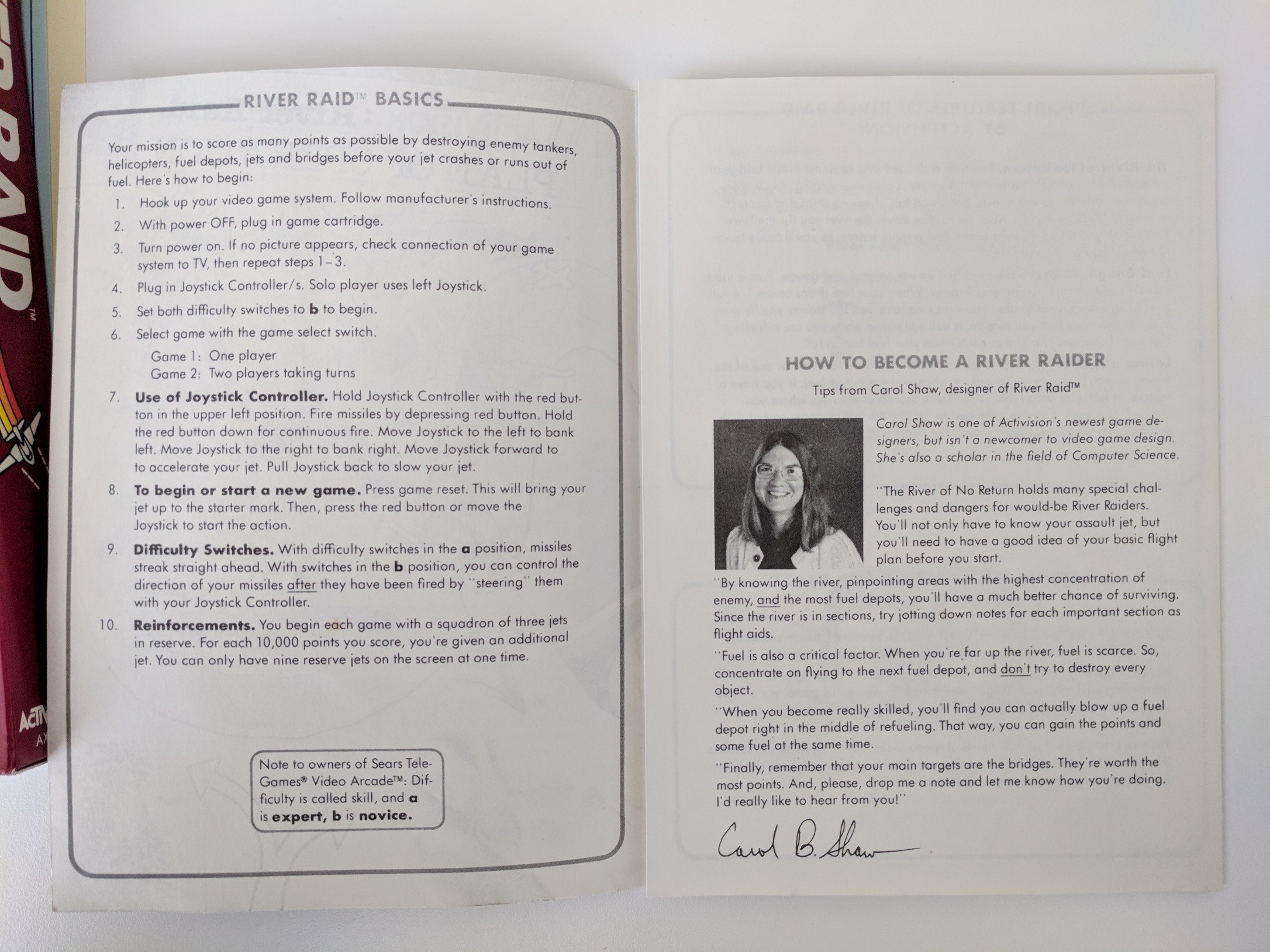 In Atari’s early years, Carla Meninsky was one of only two female employees in Atari’s cartridge design division, along with Carol Shaw. When Meninsky was a teenager, her programmer mother taught her the basics of Fortran. Carla’s academic studies at Stanford began in the mathematics department, but she switched to a major in psychology with a focus in neuroscience. In school, she became interested in building an AI-powered computer animation system and spent her free time playing the text-based Adventure game. Soon after graduation, she pitched her computerized animation idea to Atari, and was hired. Almost immediately, she found herself shuttled into the unintended role of game programmer, working through a list of proposed titles with no actual description. 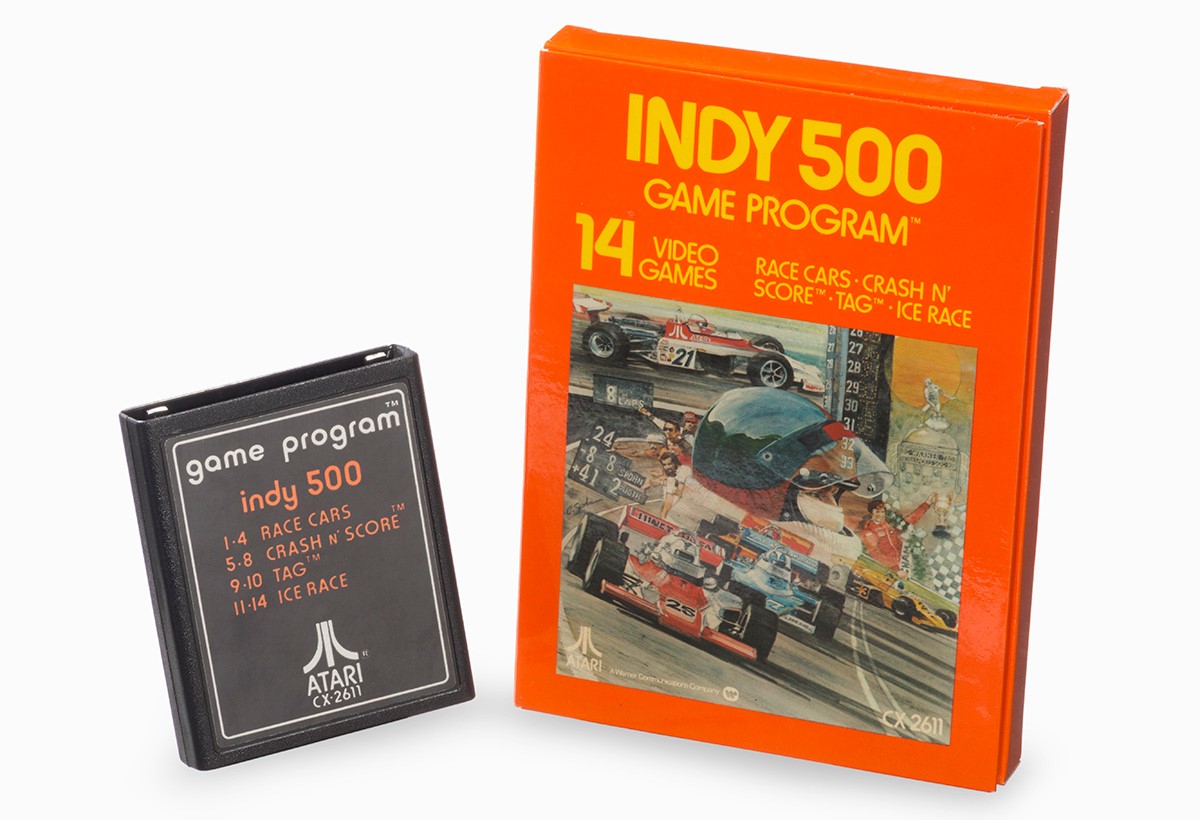 Carla Meninsky and Ed Riddle’s Indy 500 was one of the first of nine titles released with the Atari 2600 launch. THF171078

Meninsky co-designed Indy 500 with Ed Riddle. When the Atari 2600 launched, this was one of the first nine titles advertised. The game was a bird’s eye view racing game that was a “port” made in the spirit of full-size coin-op arcade games like Indy 800, Grand Trak 10, and Sprint 4. This game could be used with the standard controller, or a special driving controller with a rotating dial that allowed players to have greater control over their vehicles. 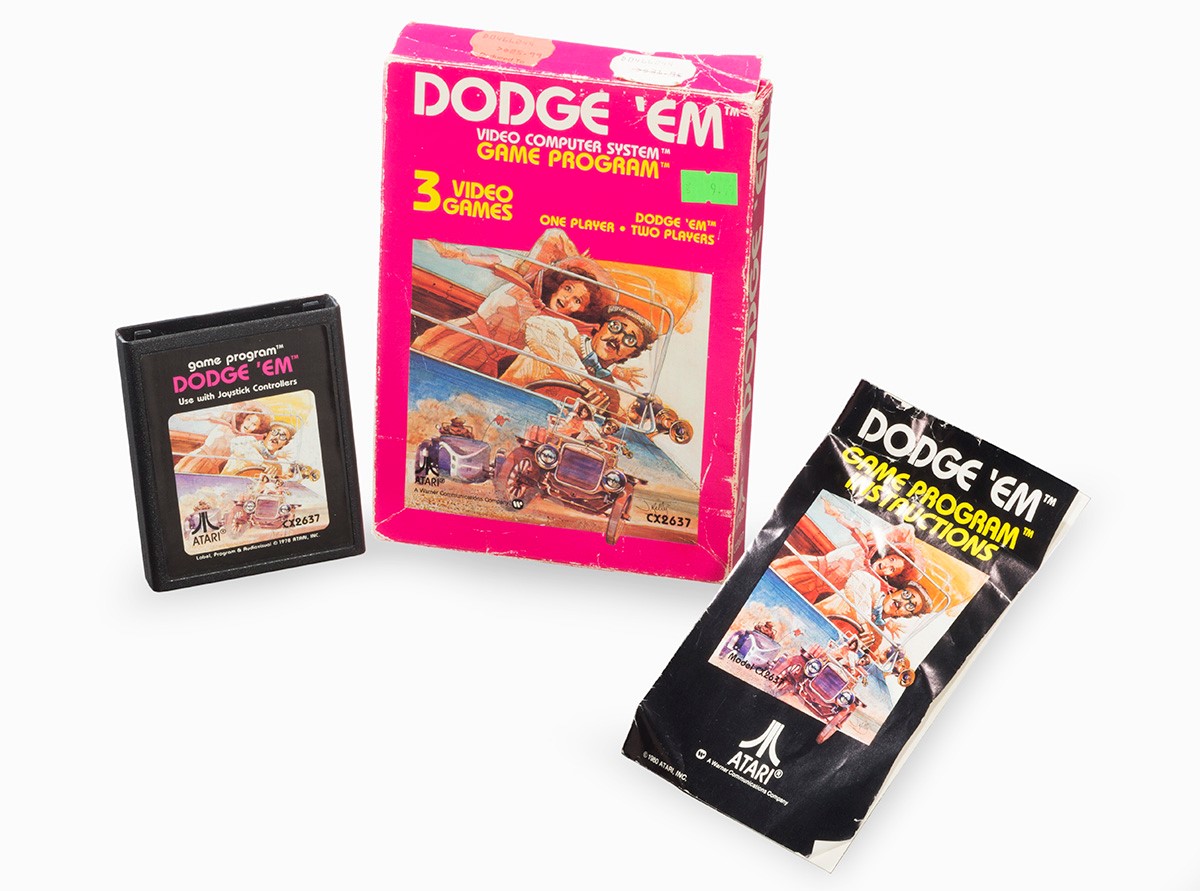 Dodge ‘Em is another driving maze game designed by Carla Meninsky, and was one of the first games she created for Atari. THF171079 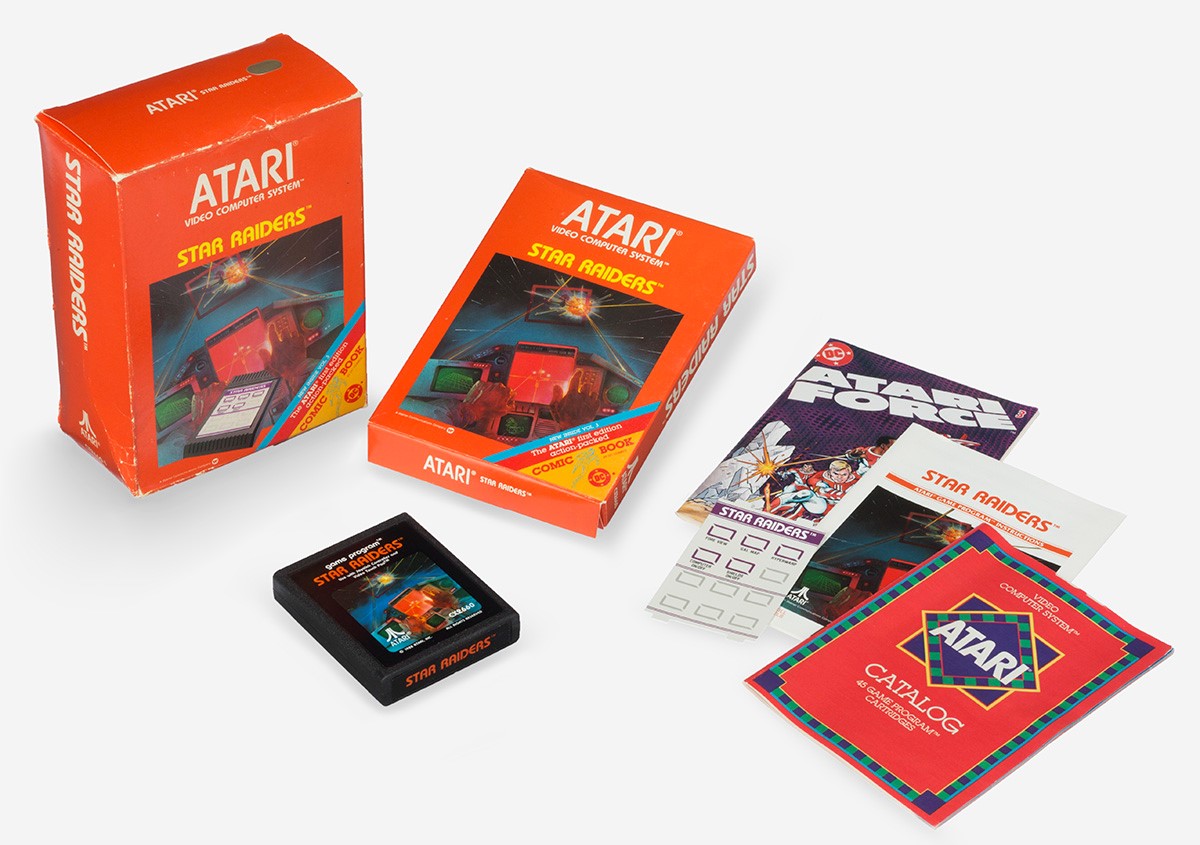 Star Raiders, also by Meninsky, is a first-person shooter game with a space combat theme. The game was groundbreaking for its advanced gameplay and quality graphics that simulated a three-dimensional field of play. The original version of the game was written by Doug Neubauer for the Atari 8-bit home computer and was inspired by his love for Star Trek. This “port” to the home console market for the Atari 2600 was programmed by Carla Meninsky. 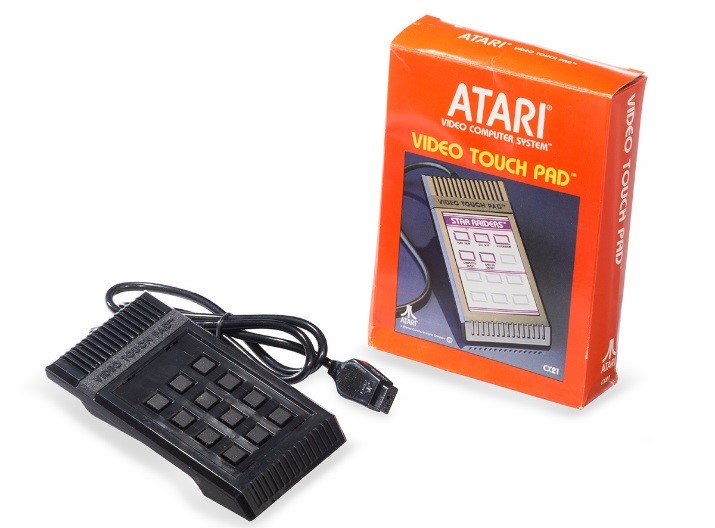 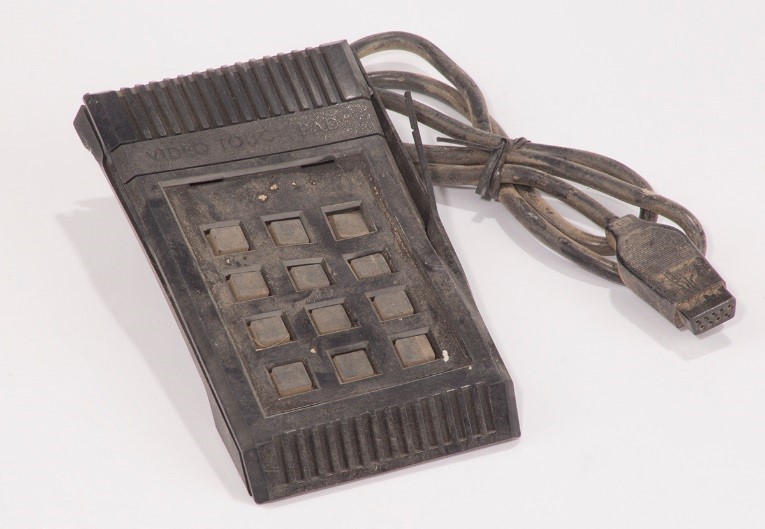 Star Raiders came with a special Video Touch Pad controller. The Henry Ford’s collections house the version sold with the 1982 game, as well as a crushed and dirtied version that was excavated from the “Atari Tomb” in 2013. THF171077 and THF159969

The 2600 version of the game could be used with a regular joystick, or a deluxe version was sold with a special Video Touch Pad controller. This twelve-button touchpad was designed to be overlaid with interchangeable graphic cards, printed with commands for different Atari games. Star Raiders was the only game to make use of this controller—perhaps if it weren’t for the looming “Video Game Crash” of 1983, other developers would have made use of this controller.

Atari was one of the first companies with the types of workplace perks that are now ubiquitous at Silicon Valley companies today. It had a reputation for attracting the young, the rebellious, and the singularly talented. While certain aspects of Atari’s workplace culture might raise eyebrows today (and rightly so), it also doesn’t take much digging to find stories of women who were empowered to make vital contributions to the company. These recent artifact acquisitions—games designed and programmed by female gaming pioneers working at Atari—embody an ambition to represent and celebrate diverse cultures through our technological collections.

Kristen Gallerneaux is the Curator of Communications and Information Technology at The Henry Ford.