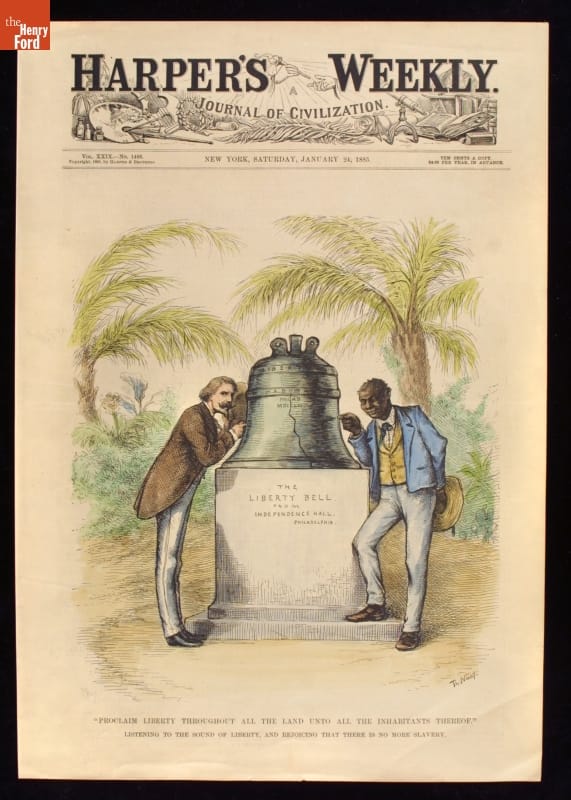 This 1885 Harper's Weekly cover celebrated the freedom of enslaved African Americans 22 years after emancipation with the text, "Proclaim liberty throughout all the land unto all the inhabitants." / THF11676

Liberty stands as one of the ideals that inspired the United States from its beginning, as the following quotes from founding documents indicate:

“We hold these truths to be self-evident, that all men are created equal, that they are endowed by their Creator with certain unalienable Rights, that among these are Life, Liberty, and the pursuit of Happiness.” –Declaration of Independence, 1776

“We the People of the United States, in Order to form a more perfect Union, establish Justice, ensure domestic Tranquility, provide for the common defense, and promote the general Welfare, and ensure the Blessings of Liberty to ourselves and our Posterity.” –Constitution of the United States, 1788

National aspirations for liberty resonated, but “liberty” for some trapped others in servitude. United States expansion came at the highest cost to indigenous and enslaved individuals. For them, liberty rang hollow.

The Union victory in the Civil War affirmed the nation’s authority to abolish slavery, expand citizenship and civil rights protection, and grant universal manhood suffrage.  The Fourteenth Amendment affirmed that “No state shall . . . deprive any person of life, liberty, or property, without due process of law; nor deny to any person within its jurisdiction the equal protection of the law.” Yet, newly freed Black Americans faced discrimination that deprived them of these unalienable rights.

Throughout this tumultuous history, the word “liberty” has been on all U.S. coins. The Coinage Act of 1792 established the U.S. Mint and decreed that all coins include an “impression emblematic of liberty” and the word “liberty.” Thus, the lawful tender in the United States, from the start of our national currency, emphasized liberty—even as the nation built its economy on and around the enslavement of people of African origin and descent.

The United States marked its 170th anniversary in the year that the U.S. Mint first linked “liberty” to Black history. Congress authorized production of a 50-cent coin to “commemorate the life and perpetuate the ideals and teachings of Booker T. Washington,” about 30 years after Washington’s death, on August 7, 1946 (Public Law 610-79th Congress, Chapter 763-2D Session, H.R 6528 August 7, 1946). Washington, noted educator and advocate for economic independence and Black autonomy, built his reputation as he built a segregated public school in Tuskegee, Alabama, into an engine of Black economic development. The Tuskegee alumni networks enthusiastically sustained his ideals, including liberty achieved regardless of racism and separate-but-equal segregation. 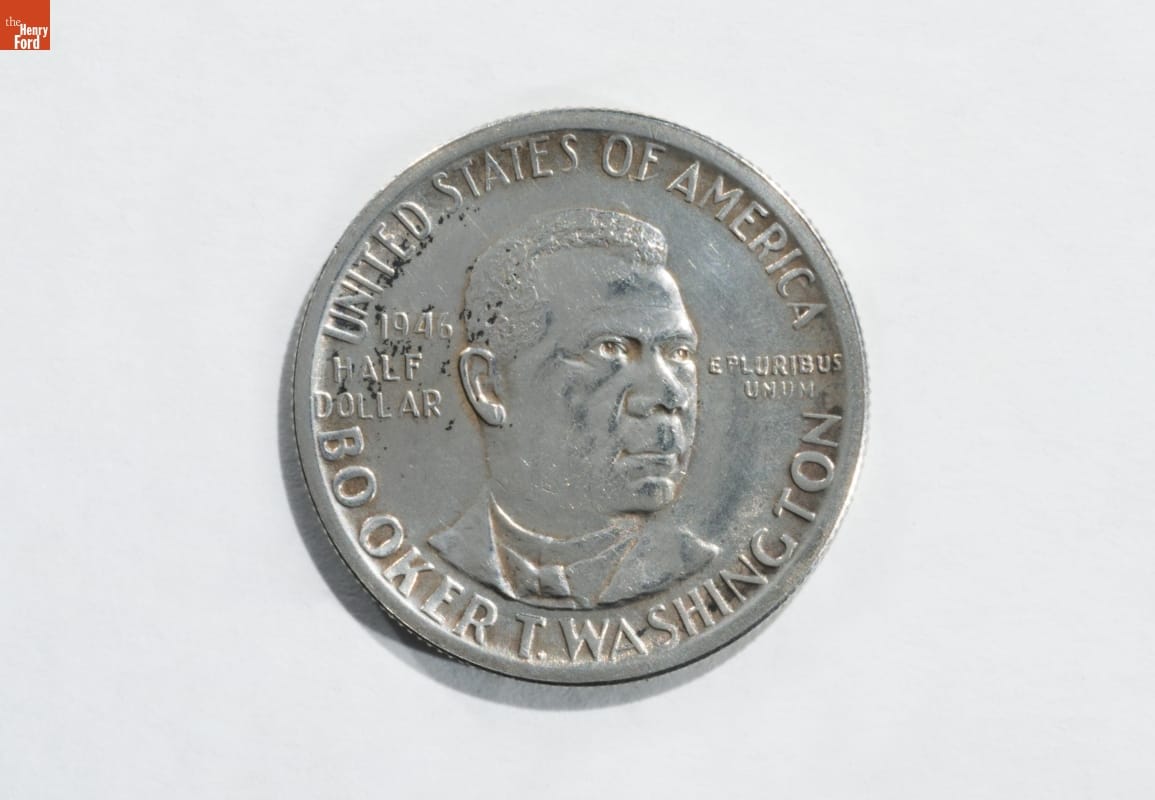 In addition to the word “liberty,” the coin’s reverse side summarized Washington’s evolution, from his birth as an enslaved person to his induction into the Hall of Fame for Great Americans in 1945. 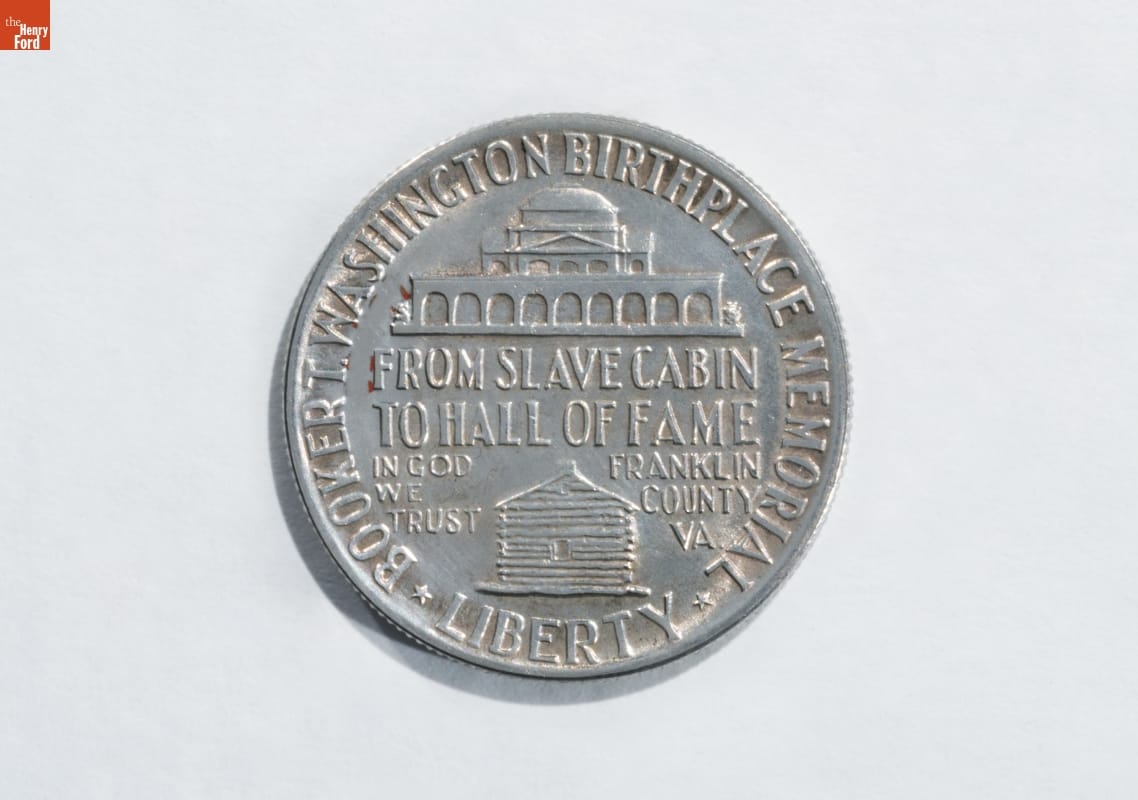 Verso, Booker T. Washington Commemorative Half Dollar Coin, 1946, Produced in Philadelphia, Pennsylvania. The back of the coin featured the log structure memorialized as the Booker T. Washington Birthplace Memorial in Franklin County, Virginia, and the Hall of Fame for Great Americans, into which Washington was posthumously inducted in 1945, located in the Bronx, New York City.  / THF170780

The Black sculptor who designed the coin, Isaac Scott Hathaway, summarized Washington’s life story on a trajectory from enslavement to recognition. Hathaway had pursued this work for most of his life, convinced that Black Americans warranted representation in classical forms—specifically on busts and bas-relief plaques—that rivaled those of gods and goddesses. He mass-produced plaster busts and plaques of more than 200 Black women and men for customers to purchase and display in homes, schools, and churches. He divided his time between memorializing Black individuals and teaching in Tuskegee Institute’s Department of Ceramics, which he founded. His connection to Tuskegee helped secure his appointment as the first Black artist to design a coin for the U.S. Mint in 1945. 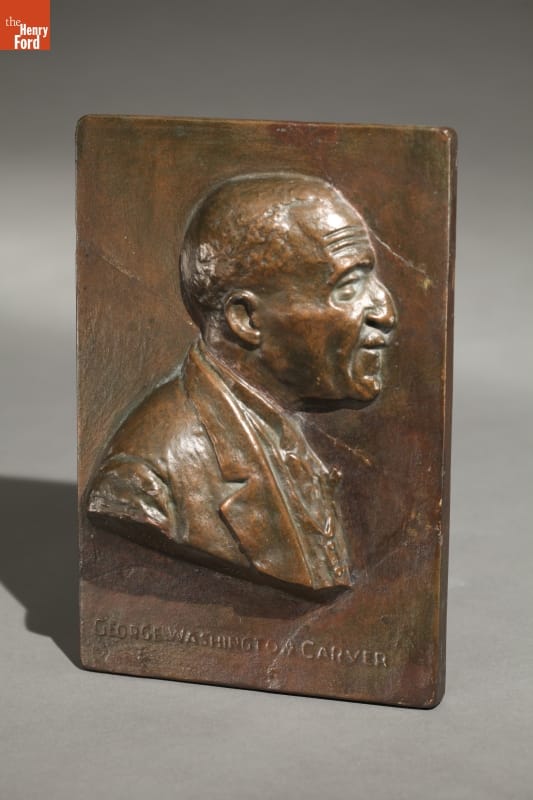 George Washington Carver Plaque, 1945. Hathaway knew Carver, and he cast this small bas-relief plaster plaque out of respect for “this venerable man whose acquaintance and friendship I enjoyed for 40 years.” He donated this plaque, as well as a plaster cast of Carver’s hand, to The Henry Ford in December 1945. / THF152082

The commemorative half-dollar coin featuring Booker T. Washington remained in production between 1946 and 1951. Sales of the commemorative sets, however, fell short of expectations. The U.S. Congress amended the August 7, 1946, act, reauthorizing a redesigned coin that added Tuskegee Institute agricultural scientist George Washington Carver to the front, and a patriotic message on the back  (Public Law 151-82d Congress, Chapter 408, 1st Session. H.R. 3176 September 21, 1951). The Mint again retained Hathaway to design this second coin. One and one-half million Washington coins were melted and recast into the new issue. 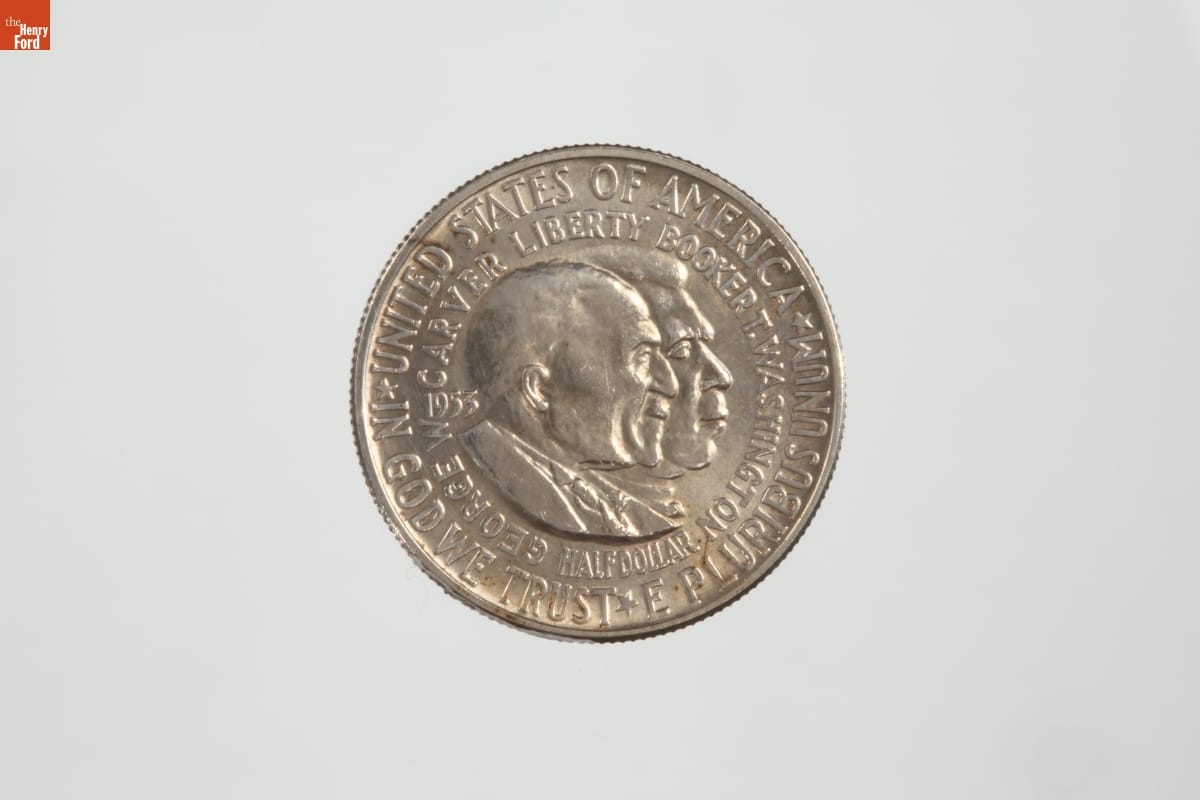 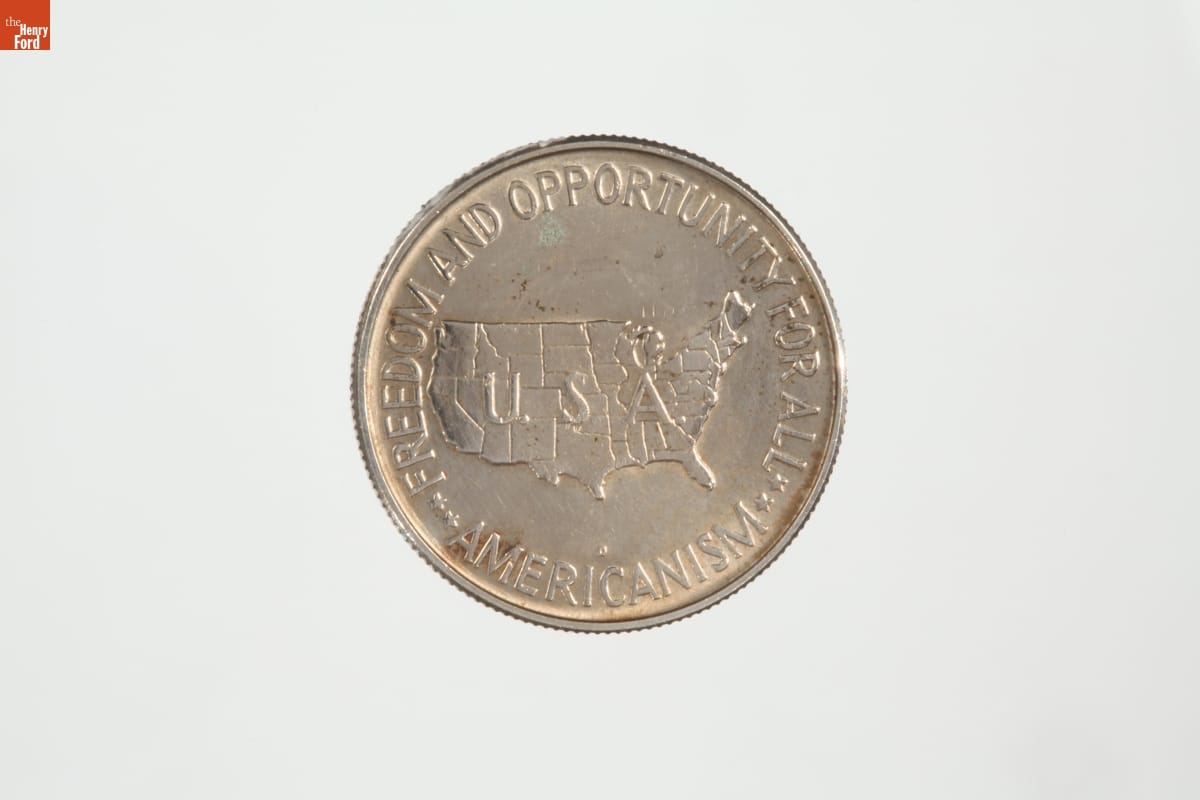 Proceeds from sales of both of these commemorative coins were ear-marked for completion of the only national monuments documenting Black history at the time—the Booker T. Washington Birthplace Memorial in Virginia and the George Washington Carver National Monument in Missouri. But sluggish sales did not generate the anticipated income for these two projects. When the amended act expired on August 7, 1954, the remaining million coins minted but not sold were melted and used for other coins. The practice of issuing commemorative coins for private initiatives—funding historic sites and memorials, in the case of these two coins—also ended with the expiration of the Washington commemorative coin act.


This brief video provides an overview of the story of the Washington and Carver coins. / YouTube

Criticism abounded over the design, the depiction of enslavement, and the avoidance of other Black history that warranted attention. The generation that had been born enslaved was passing, but national commemorations remained fixated on that history. The memorials to their birthplaces became more closely associated with Americanism during the Cold War than the freedom struggles launched during the 1940s and 1950s; however, many clamored for more attention to the ongoing struggle to secure the blessings of liberty for all in the face of post-slavery racist tactics. Even today, telling this history remains a work in progress.