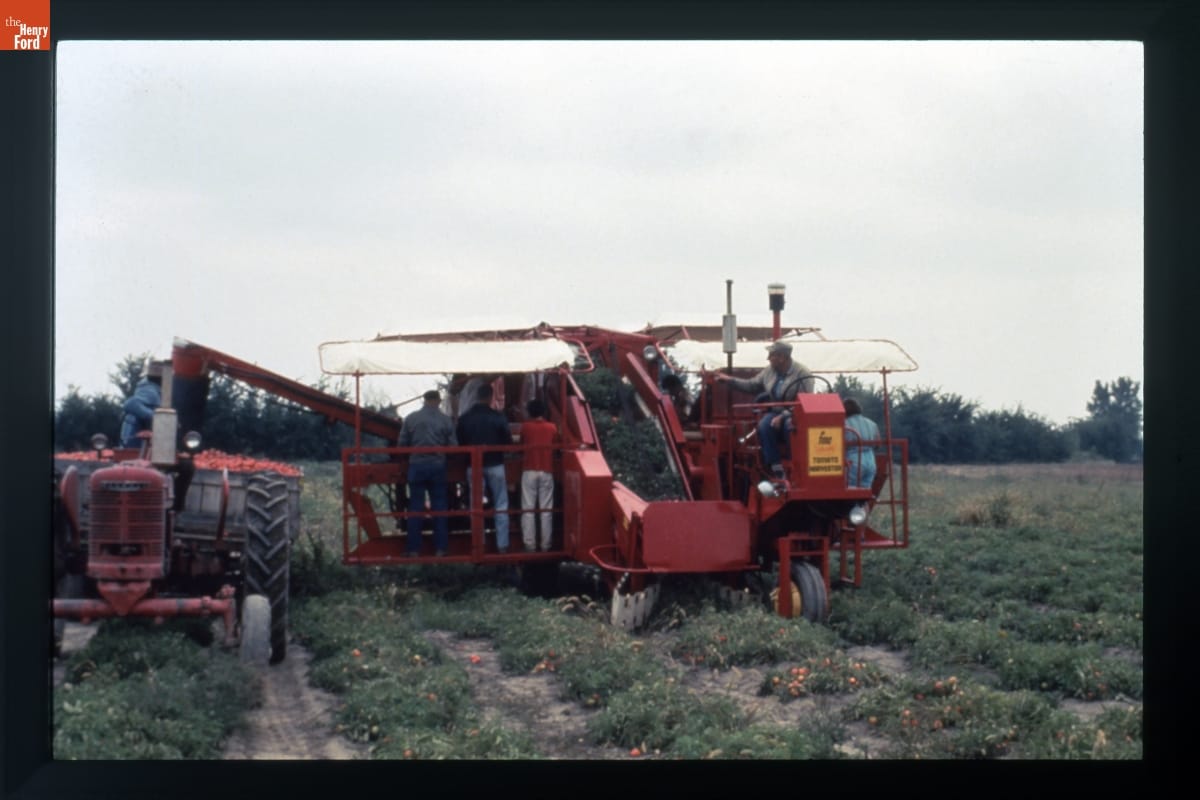 The adoption of mechanical tomato harvesters in the 1960s both industrialized tomato production and ushered in a countermovement of small growers and local food advocates. How could one machine prompt such contradictory but real changes in agriculture? The full story spans decades and reveals complex relationships of supply and demand—for both agricultural products and the people who grow and harvest them. 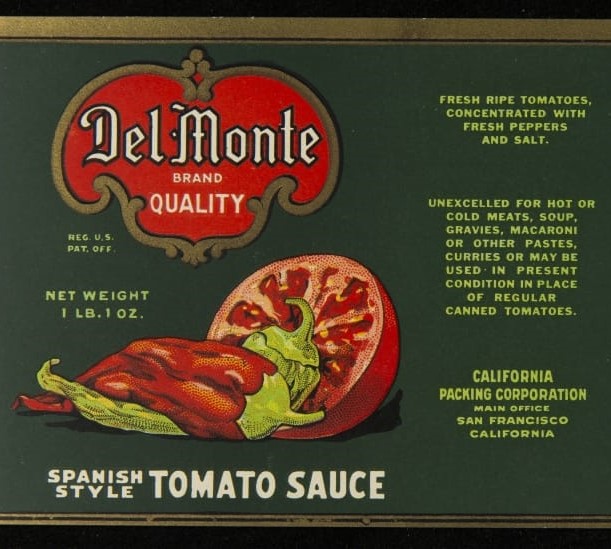 To meet rising demand for processing tomatoes (to be made into ketchups, sauces, tomato juice, canned tomatoes, and other products) in the early 20th century, growers needed laborers to pick them. Those laborers, in turn, needed living wages. Tensions between growers and laborers came to a head during the New Deal era of the 1930s, when government policies promised minimum wages, maximum hours, and workers’ compensation. Yet, lobbyists working for growers and agricultural processers convinced policy makers to exempt agricultural workers from these protections.

Laborers voted with their feet, seeking employment beyond farm fields. This caused a critical labor shortage that became even more acute during World War II for growers raising tomatoes and other crops in California and beyond. To meet demand, the United States and Mexican governments negotiated the Mexican Farm Labor Agreement. This guest labor program brought millions of farmworkers, known as braceros, from Mexico to work in the United States for short periods of time between 1942 and 1964. 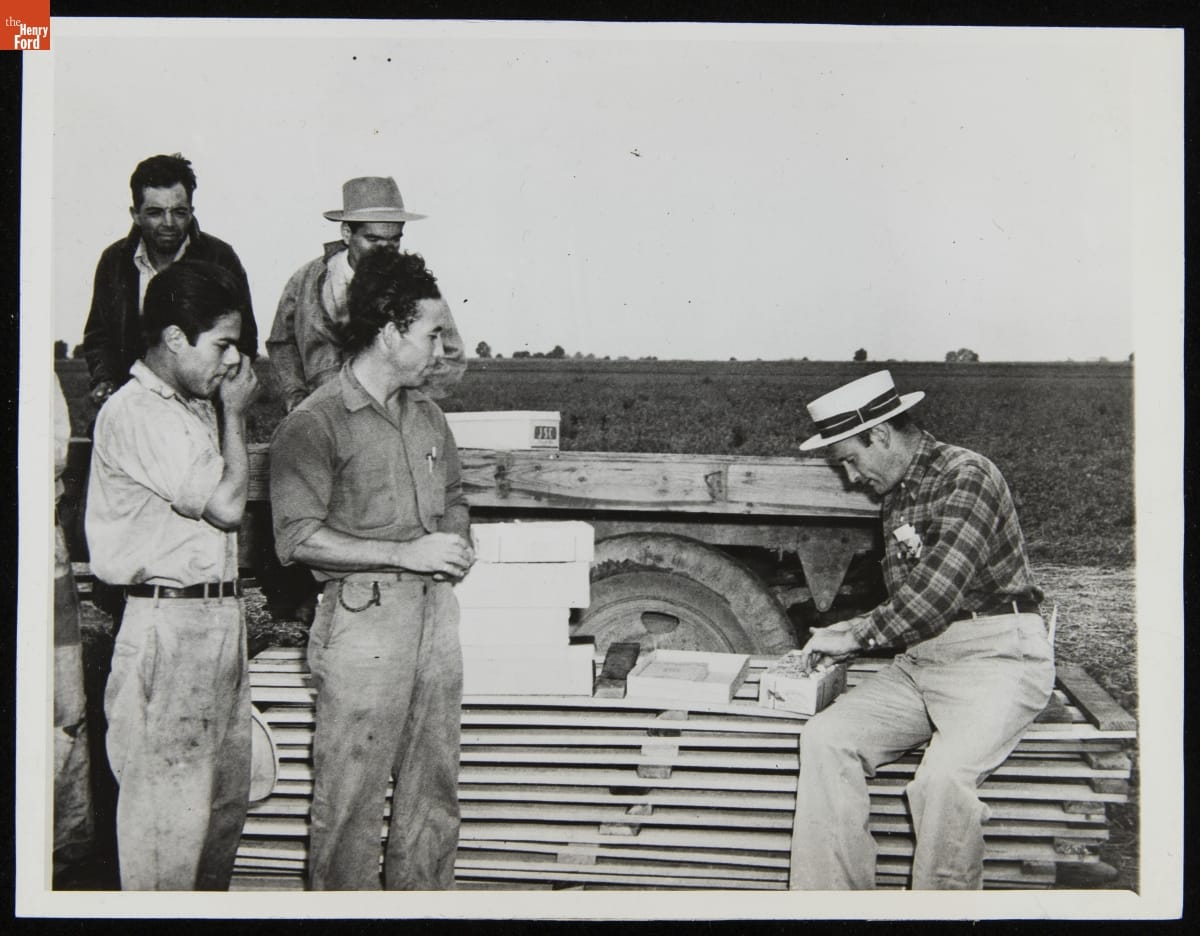 This photograph illustrated a news report on braceros resuming the tomato harvest near Danville, Illinois, in August 1945. / THF147934

A chain of events during the 1960s called attention to the plight of agricultural laborers. Edward R. Murrow’s television documentary Harvest of Shame (1960) highlighted the precarious existence of migrant laborers who worked picking perishable fruits and vegetables in the Midwest and along the East Coast. The Bracero Program expired in 1964, reducing the number of available laborers and increasing growers’ dependence on the existing labor pool. Congress passed the Civil Rights Act of 1964, which, along with other anti-poverty and housing legislation, made it clear that migratory and seasonal laborers had the right to humane treatment.

On the West Coast, Filipino laborers organized as part of the Agricultural Workers Organizing Committee. Seeking better wages and a more favorable rate of payment, they launched a grape strike that expanded into Delano, California, in 1965. The National Farm Workers Association, consisting mostly of Mexican migratory workers, joined the cause. This coordinated effort resulted in a new organization, the United Farm Workers (UFW), with Cesar Chavez as president. 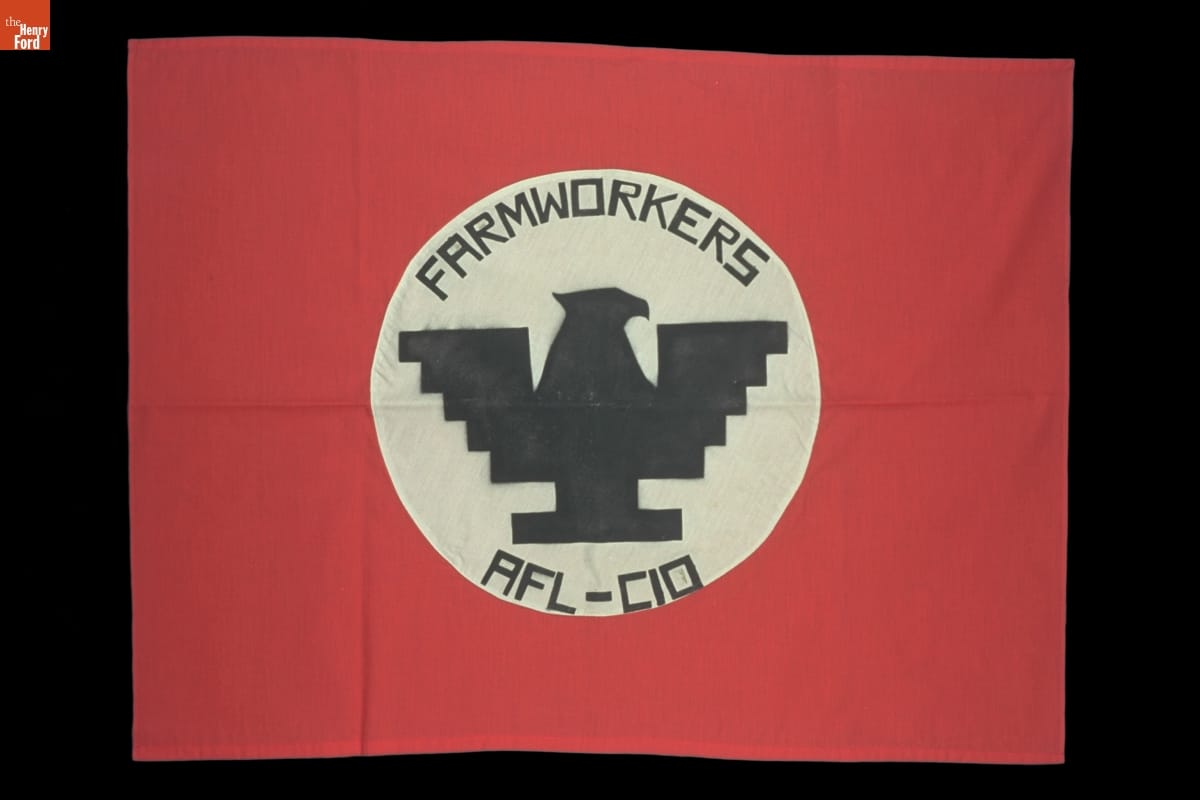 The UFW devised innovative solutions to increase pressure on growers, and—especially due to the efforts of co-founder Dolores Huerta—built the Delano grape strike into a national boycott. This focused attention on basic needs for migratory and seasonal laborers. In addition to ensuring some protections for individuals, the coordinated effort secured the right for migratory and seasonal laborers as a class to collectively bargain.

Engineering a Solution to Labor Shortages

Tomato growers, keen on getting their crop planted, cultivated, and harvested at the optimum times, were interested in mechanical solutions that could address labor shortages. Mechanizing the harvest of this perishable commodity, however, proved to be a time-consuming challenge.

Scientists at the University of California, Davis (UC Davis), sought a labor shortage solution through mechanical and biological engineering. Research and development begun in the 1940s finally resulted in the successful design of both a mechanical tomato harvester (created in partnership with Blackwelder Manufacturing Company) and a tomato that could withstand mechanical harvesting (the VF145). 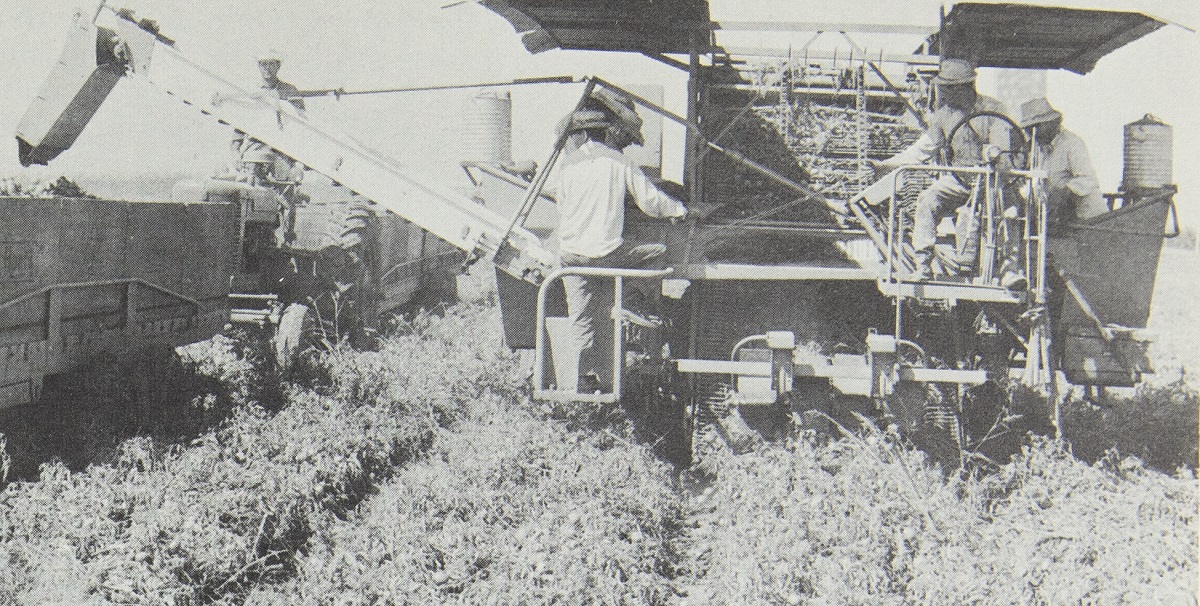 By 1961, Blackwelder had released a commercial harvester and recommended the VF145 tomato for optimum mechanical harvesting. FMC Corporation released a competing harvester by 1966. Manufacturers touted the labor-saving value of mechanical harvesters at a time when the supply of laborers was too small to meet demand, and the adoption of this new technology was swift. In 1961, 25 mechanical harvesters picked about one-half of one percent of California’s tomato crop. Between 1965 and 1966, the number of harvesters doubled from 250 to 512 and the percentage of mechanically harvested tomatoes in California rocketed from 20 percent to 70 percent. By 1970, the transition was complete, with 99.9 percent of California’s tomato crop harvested mechanically. (For more, see Mark Kramer’s essay, "The Ruination of the Tomato," in the January 1980 issue of The Atlantic.)

Some might claim mechanical harvesters helped save California’s processed tomato industry—by 1980, California growers produced 85 percent of that crop. But a closer look reveals a more complicated cause-and-effect. While growers could theoretically save their crop by replacing some labor with machines, many small-scale growers could not save their businesses from large-scale competition. By 1971, the number of tomato farmers had dropped by 82 percent. (This consolidation was mirrored elsewhere in the industry, as just four companies—Del Monte, Heinz, Campbell, and Libby’s—processed 72 percent of tomatoes by 1980.) 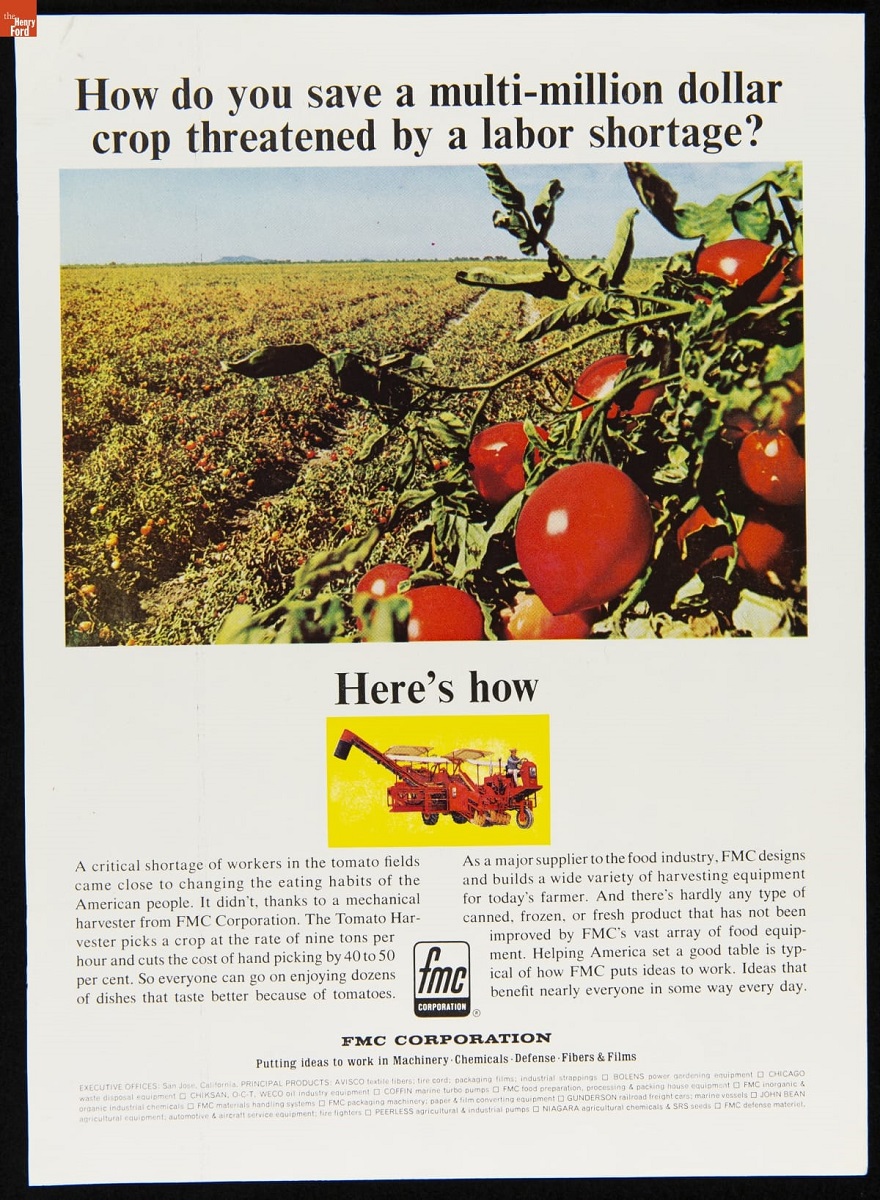 Tomato harvester advertisements promised farmers could save their businesses by replacing scarce laborers with machines, but many small-scale growers could not save themselves from large-scale competitors. Advertisement for FMC Corporation Tomato Harvester, circa 1966. / THF610767

A group of growers sued UC Davis, challenging the school for investing so much to develop the tomato harvester without spending comparable resources to address the needs of small farmers. In response, UC Davis opened its Small Farm Center, an advocacy center for alternative farmers, in 1979. These events coincided with wider efforts to hold the United States Department of Agriculture accountable for unequal distribution of support, resulting in increased attention at the national level to economically disadvantaged and ethnically diverse farmers. Around this same time, food activist Alice Waters raised awareness through her advocacy of locally sourced foods. Her restaurant, Chez Panisse, founded in Berkeley, California, in 1971, became an anchor for the burgeoning Slow Food movement.

So, while mechanical tomato harvesters—like the one on exhibit in Henry Ford Museum of American Innovation—represent large-scale scientific and industrial advances, they also offer insight into this country’s complex labor history and help tell stories about small-scale farmers and their connections to communities, customers, and all of us who eat.