Bringing in the Beans: Harvesting a New Commodity 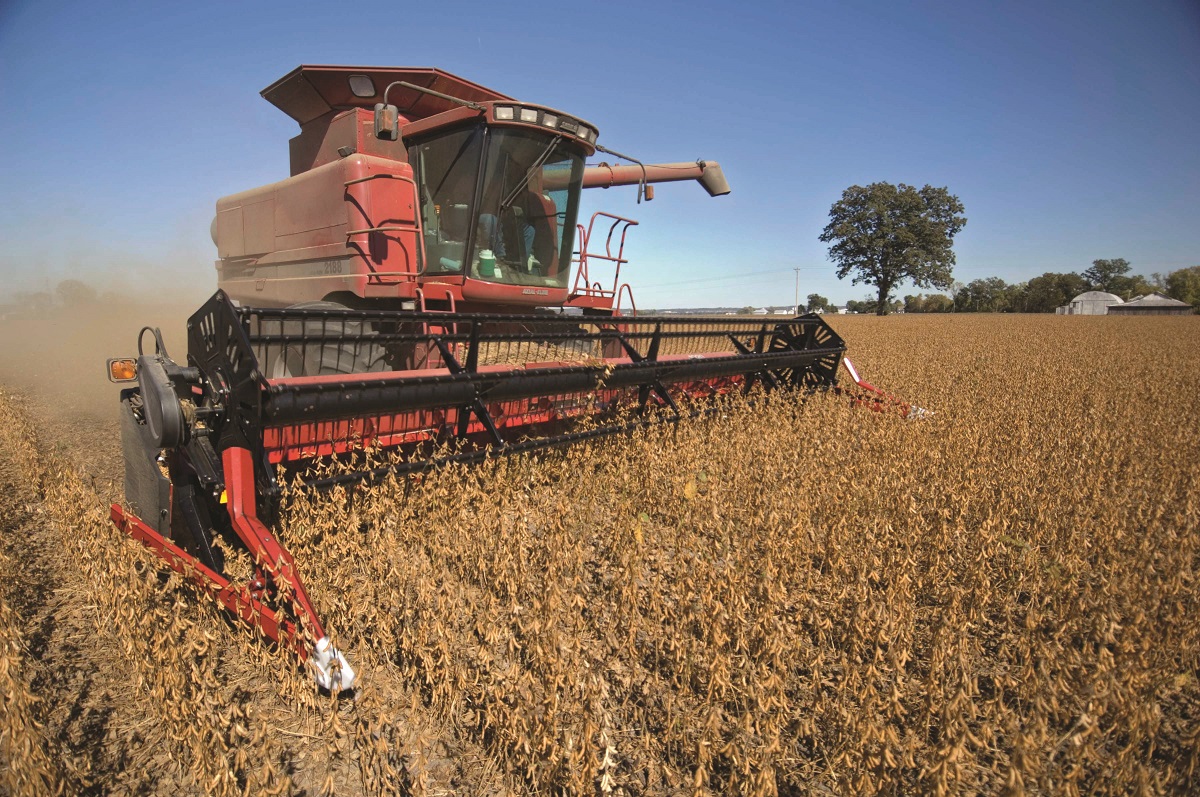 Soybean Harvesting / Photo courtesy of the United Soybean Board

Farmers have only a narrow window of opportunity to harvest their crops. For Michigan soybean growers, that window generally runs from the end of September through November, but is impacted yearly by weather events. By that point in the season, the plant is fully mature and has lost most of its leaves, and only the stalk and pods (with three to four beans per pod) stand in the field (R8 Growth Stage). The seeds are brown and hard at this point, and bean moisture content is 13-15%. 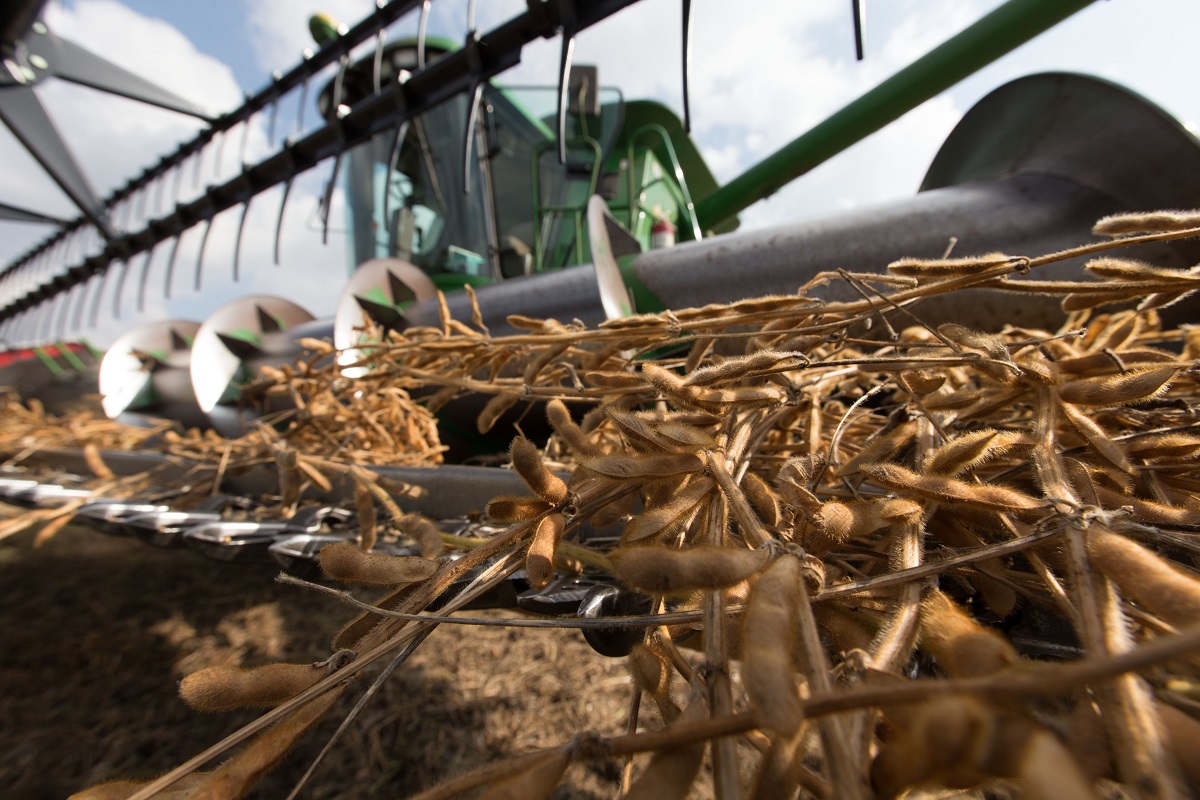 Harvesting soybeans—to cut the stalk, separate the bean from the pod, clean the bean, and store it until moved from harvester to wagon or truck—requires a multifunctional machine. Soybean growers benefitted from around a century of experimentation with specialized harvest machines when it came time for them to look for the best machine for the job. Farmers need machines that work, and different machines to harvest different crops. The Henry Ford has some of the earliest of these mechanical innovations, each suited to a specific crop—the Ambler mowing machine for hay, models of the Hussey and McCormick reapers for grains, and the Manny combined mower and reaper (one machine adaptable for both crops).

These early-19th-century innovations represented solutions to the problem of how to reduce human labor costs. Farm families often could not meet labor demand during harvest seasons. Too little labor meant lost crops, and lost crops made it difficult for farmers to feed their livestock (hay) or earn income from market crops (grain). Hiring labor was expensive, and even more expensive during peak demand at harvest time.

A century passed between the 1830s, when mechanical reapers and mowing machines first became viable, and the 1930s, when the first Allis-Chalmers All-Crop Harvester entered Michigan soybean fields. 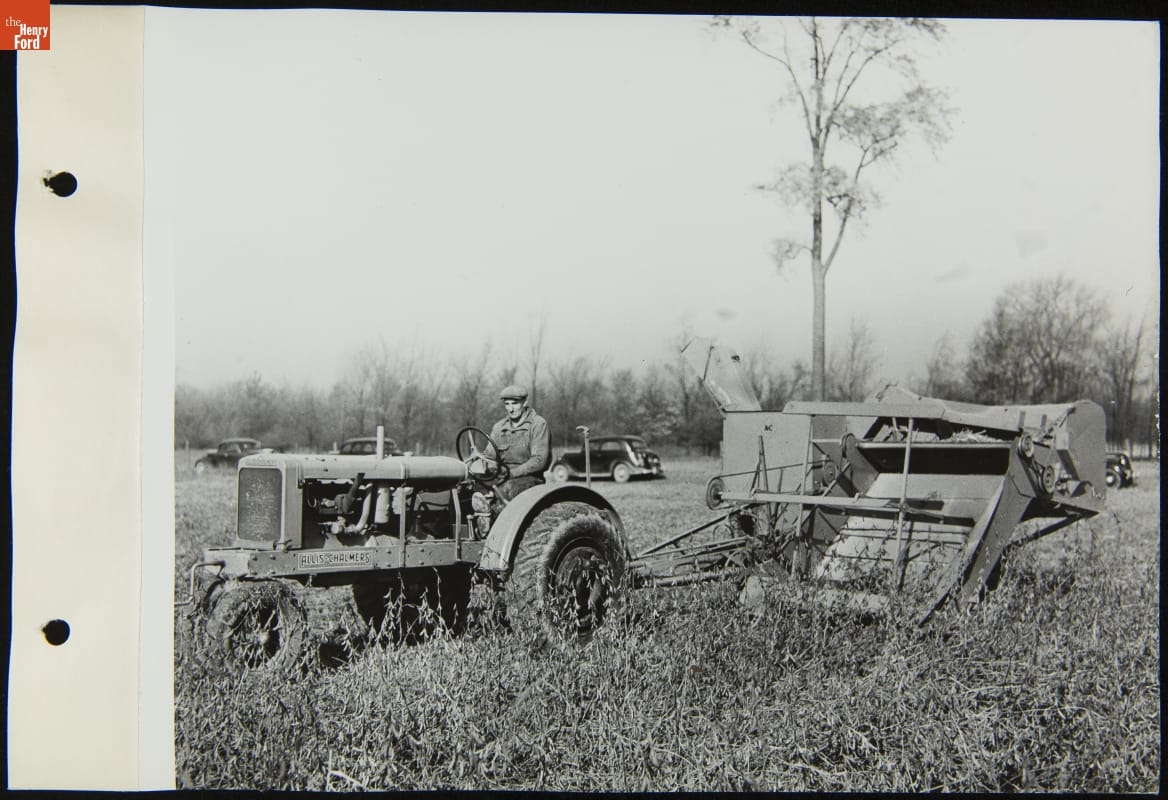 Michigan growers raised different types of beans during the early 20th century. Some raised bush beans (Phaseolus vulgaris), green beans that they harvested by hand when the pod reached the R5 growth stage and seeds had just begun to develop. Wholesale dealers distributed this perishable commodity to grocery stores while processors turned the bush beans into canned green beans. Others raised large fields of beans on contract with the H.J. Heinz Co. After the beans were fully matured and dry, growers harvested the crop by hand, then hauled the crop to a threshing machine that separated the beans from the pods and stems. Employees at Heinz processing plants continued the handwork, sorting beans from debris. Product advertising emphasized this attention to detail that yielded a quality food product.

A different type of bean—the “soy bean” (or soybean, Glycine max)—became increasingly apparent in southeast Michigan during the 1930s. Interest in this new cash crop grew apace with Henry Ford’s investment in soybean research. Scientists at work in the chemical laboratory that Ford built in Greenfield Village confirmed that soybeans had potential as a domestic source for various industrial products. Industrial demand in the region caused growers to seek a harvester suitable to the task. 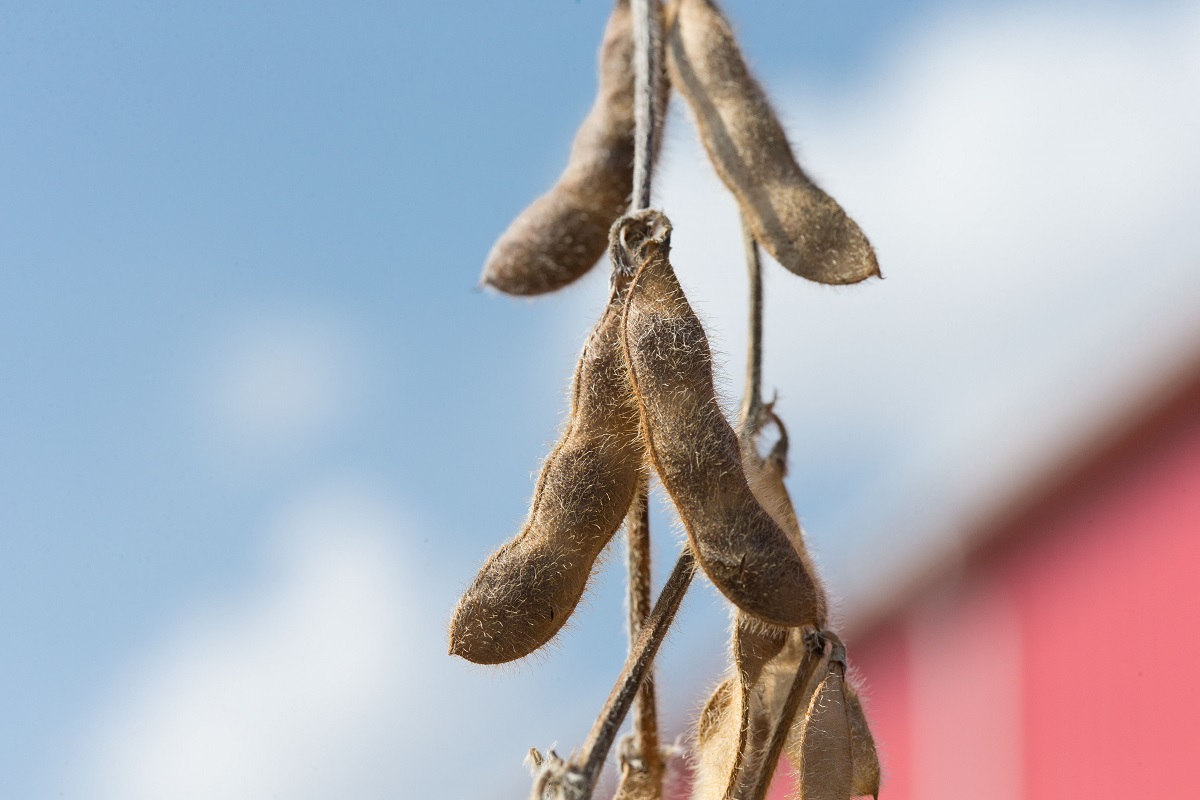 Some farmers raised seed crops to meet growing demand for the new cash crop. This specialized cultivation required careful harvesting, as described in “Soy Bean Seed Production in Michigan” (1936). Others raised crops to meet the growing demand for the new industrial raw material. The Ford Village Industries complex in Saline, Michigan, opened in 1938. A press release issued by Ford Motor Company in July 1938 indicated that 700 farmers planted 22,588 acres of soybeans processed at the Saline facility. Ford processing capacity increased as the soybean processing plant at the Rouge Plant began operations around 1942.

Farmers needed mechanical harvesters to ensure that they delivered a prime crop to Ford Motor Company. Henry Ford thus took an interest in this technology. Allis-Chalmers released its All-Crop 60 harvester in 1935, designed to operate off a tractor big enough to pull a double-bottom plow and powered by the tractor’s power take-off. The “60” represented the width in inches of the swath cut by the harvester. Ford tested the capability of the Allis-Chalmers All-Crop Harvester on a Ford Farms soybean crop in October 1936. By that time, Allis-Chalmers had sold 8,200 of the machines.

The engineer who took a leading role in the machine’s development was Charles J. Scranton, Jr. He began his career as a draftsman at Avery Company, a Peoria, Illinois, company noted for steam traction engines, threshers, and other farm equipment that went bankrupt in 1923. Scranton, as an assignee to a successor company, the Avery Power Machinery Co., secured several patents for improvements to threshers during the late 1920s.

Scranton joined Allis-Chalmers by working at the LaPorte, Indiana, location by 1934. Over 30 years, he secured around 40 patents, all focused on harvesting machinery. The All-Crop marked a crowning achievement because it suited the needs of farmers operating on a smaller scale and growing different cash crops, including soybeans, clover, milo, and other grains.

Ford featured the Allis-Chalmers All-Crop Harvester in early promotional photographs of the Ford tractor with the “Ferguson System,” the Ford-Ferguson 9N, released in 1939. This marked a ringing endorsement from the industrialist who launched soybeans as a cash crop in Michigan. 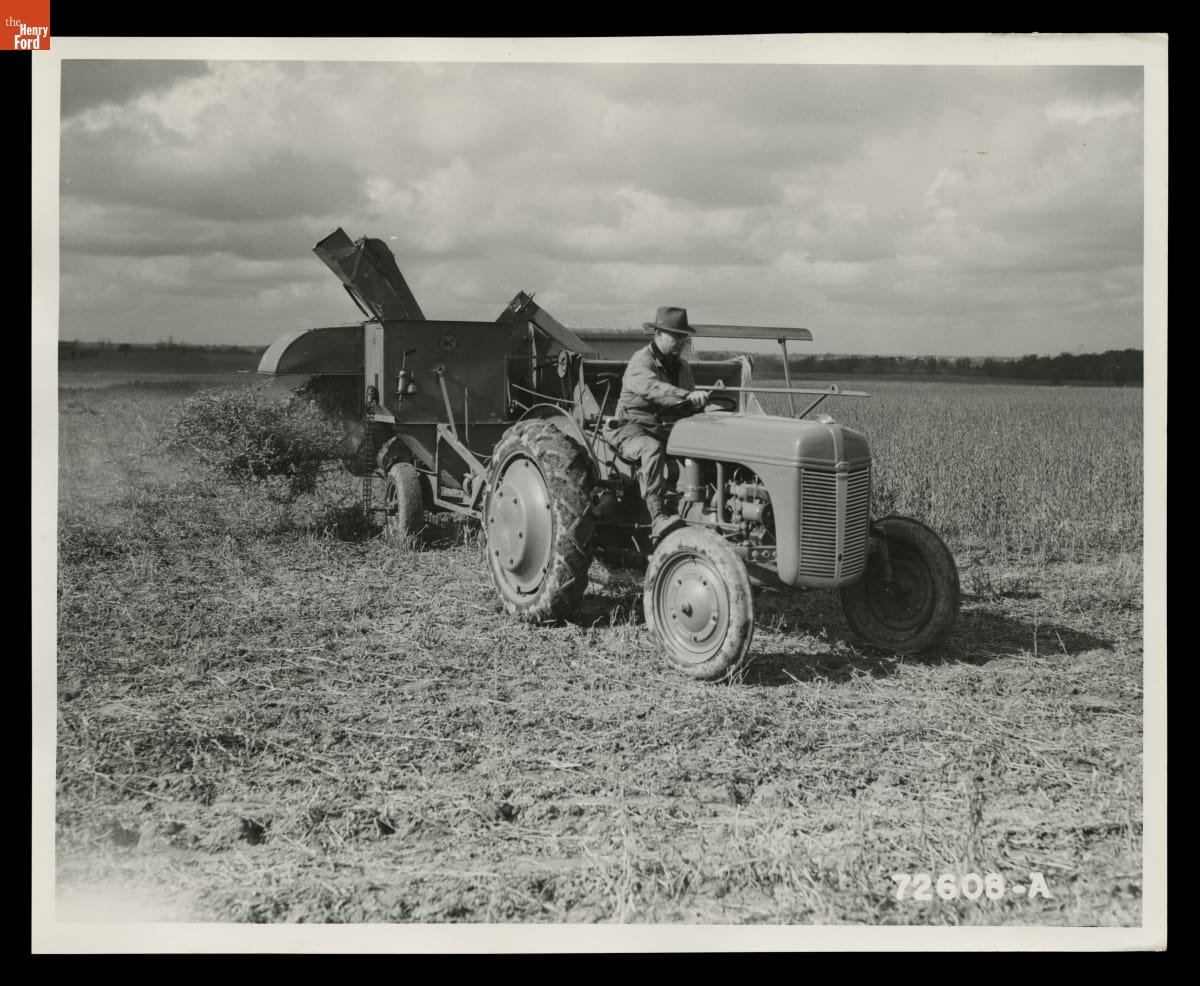 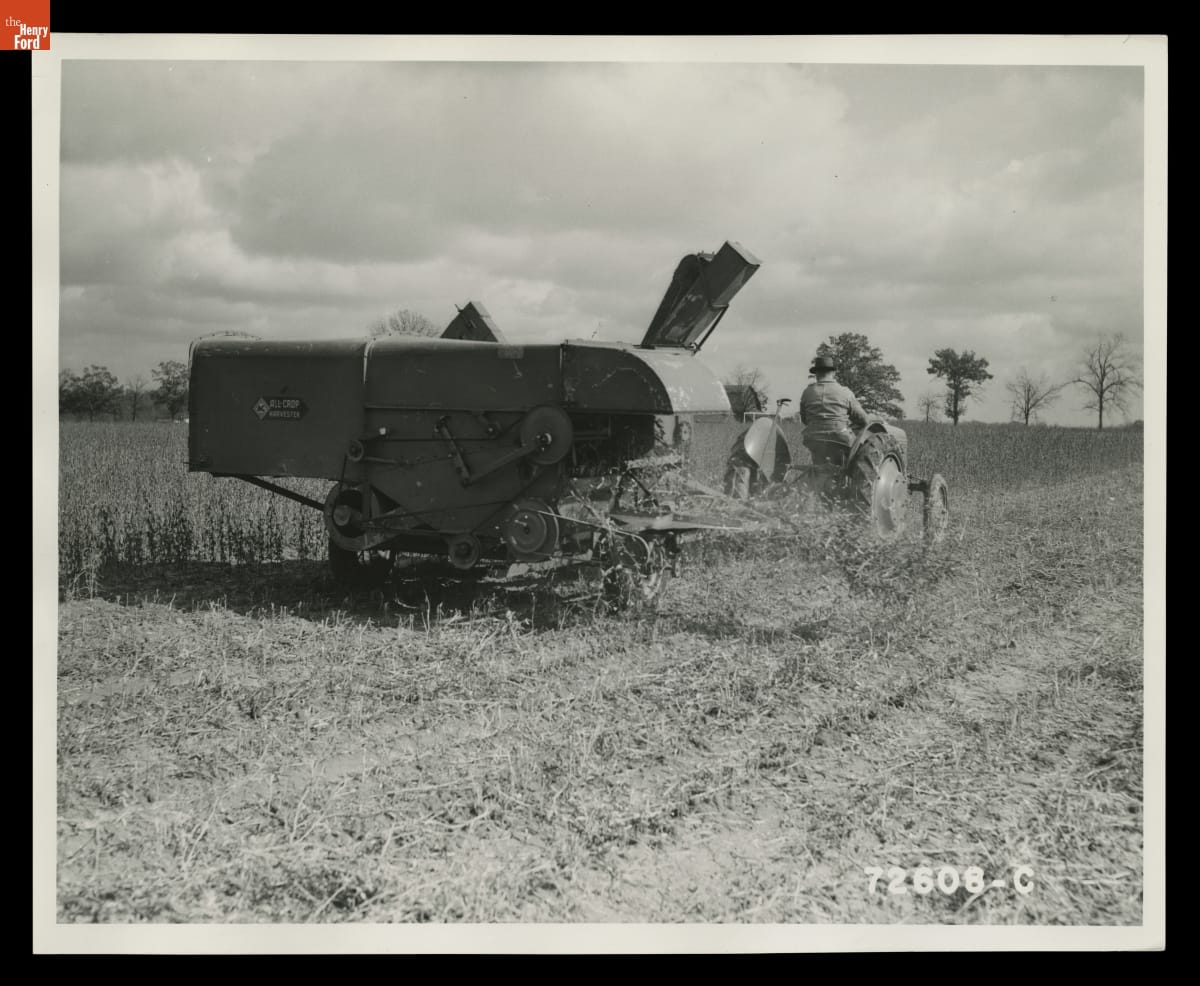 More Crop in the Hopper

As soybean acreage increased across the Midwest after World War II, farm implement companies continued to innovate. The Allis-Chalmers All-Crop was well suited to smaller scale farmers growing a variety of crops, but the scale of production increased dramatically during the 1950s as farmers in the midwestern Corn Belt shifted toward monoculture, e.g., corn, a crop heavily dependent on nitrogen, and soybeans, a legume that helps retain nitrogen in the soil. Farmers saw this combination as a strategy to help reduce input costs for synthetic and nitrogen-rich fertilizers.

Illinois-based agricultural implement manufacturer Deere & Company gained an advantage in 1954 when the company introduced an attachment that farmers could install on their combine harvesters to harvest corn. They could harvest their bean crop by switching out that attachment with a four- or five-bat (or horizontal bar) reel mechanism that drew the bean crop into the cutting head. Interchangeable front-end attachments became an industry standard. 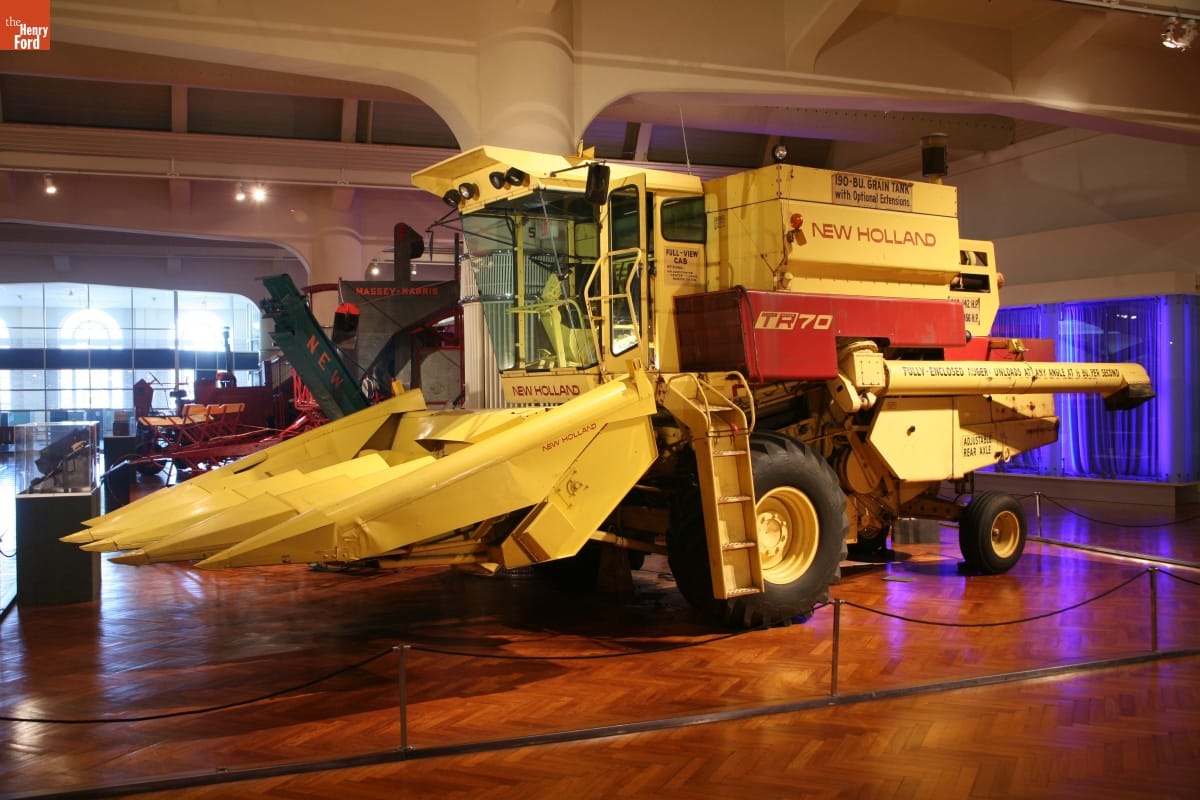 The New Holland TR70 Axial Flow combine in Henry Ford Museum of American Innovation is installed with the corn harvester attachment. Farmers could harvest four rows of corn in one pass through the field with this head. To harvest soybeans, they installed a different attachment to the front end, a “pickup reel,” as illustrated below in a New Holland TR70 product catalog. The promotional literature urged farmers to purchase a floating “cutterbar” and a “robot header height control” to harvest most efficiently. 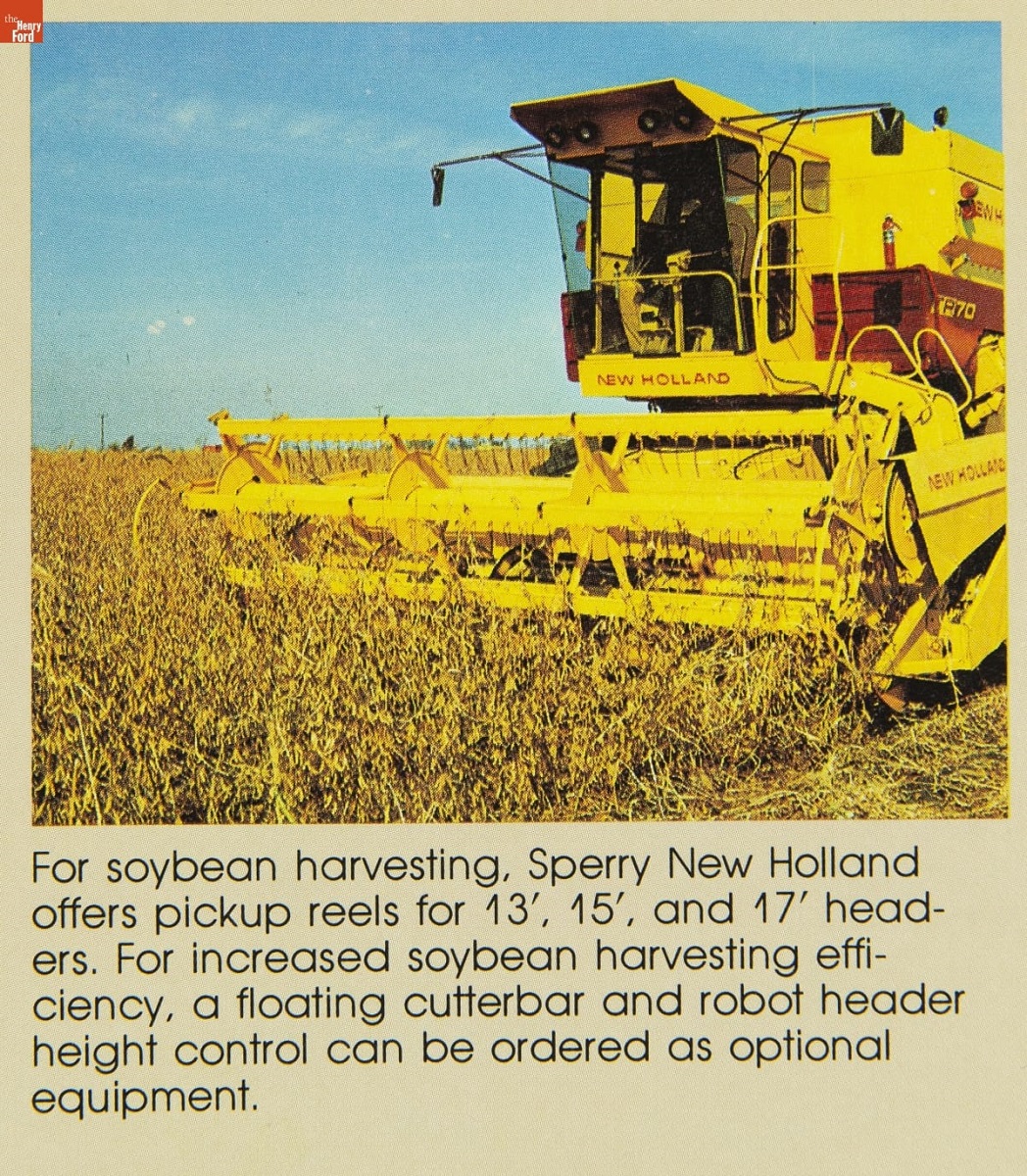 Soybean acreage increased rapidly from the late 1970s into the 1980s. This sustained research in and development of combines suitable to cutting, threshing, and cleaning soybean crops (along with corn and other smaller grains). 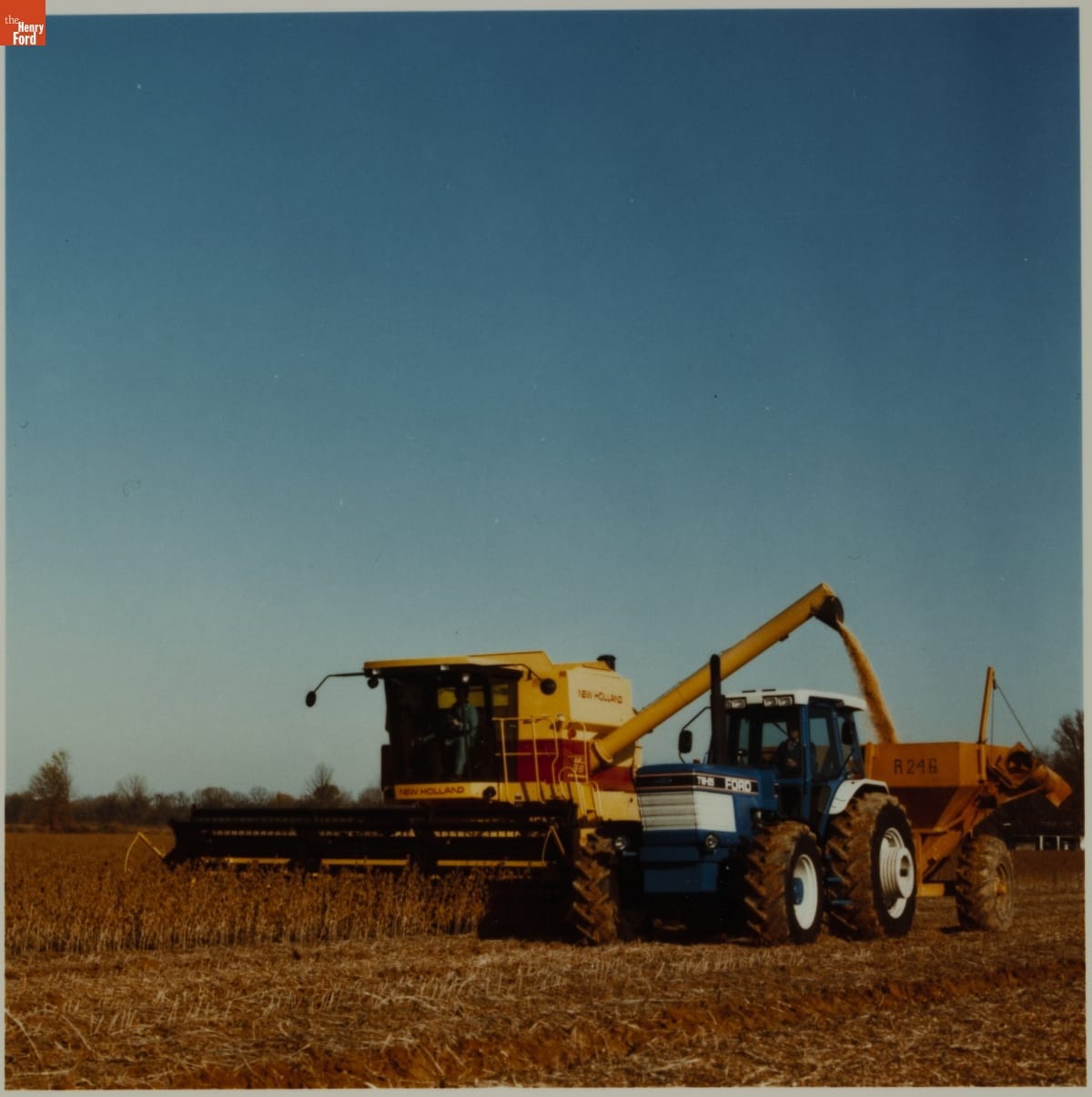 U.S. Patent and Trademark Office records include more than 40 patents secured by Scranton during his work with Allis-Chalmers and at least three from his years with Avery Company.


Debra A. Reid is Curator of Agriculture and the Environment at The Henry Ford. This blog post was produced as part of our partnership with the Michigan Soybean Committee to deepen understanding of the important soybean crop and to provide the public with the chance to learn more about agriculture and the innovations that have helped farmers feed the world. You can learn more about the partnership, soybeans, and soybean ties to The Henry Ford in our kickoff post here.