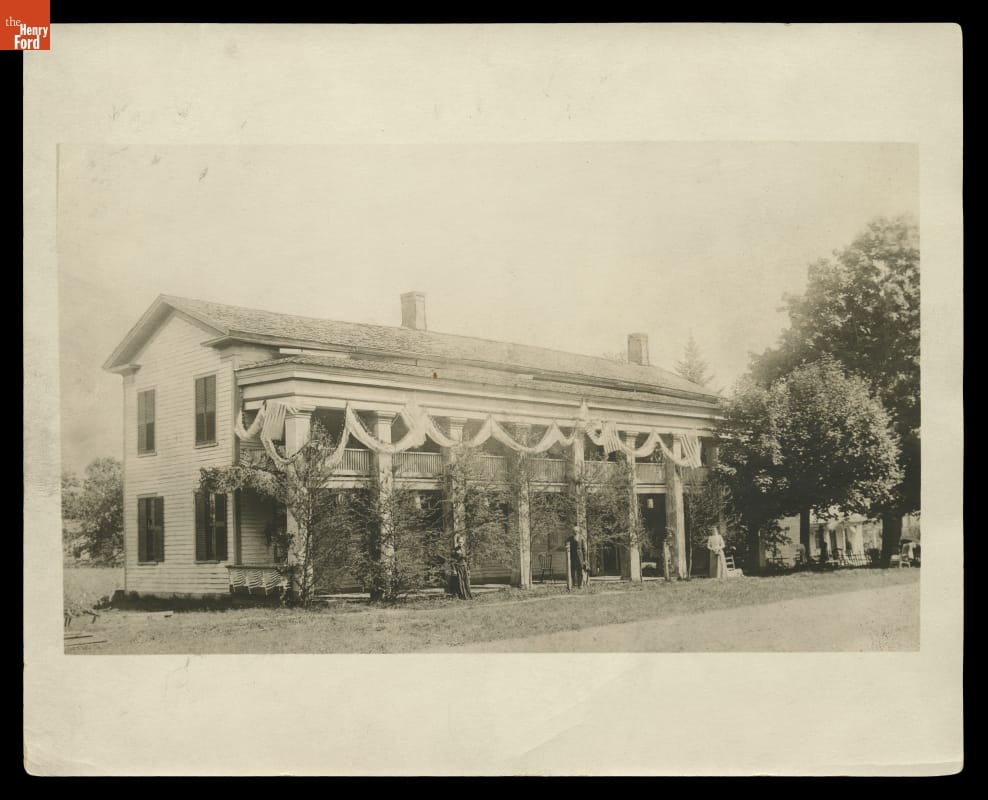 “I am sure the Americans can fix nothing without a drink…. To use their expression, the way they drink, is ‘quite a caution.’”  –Frederick Marryat, A Diary in America (1839)

Today the term tavern, as well as the now largely British term public house, are understood to be synonymous with the American term bar—places licensed to sell alcoholic beverages. In the mid-19th century, the two former terms denoted places identical to inns or hotels, which provided lodging and food as well as drinks. Regardless of what the establishment was called, its center was surely its barroom—and thus, perhaps, the modern equivalence of the terms tavern, public house, and bar.

Even in a large rural inn such as Eagle Tavern, which had a public sitting or reading room, a formal or ladies' parlor, and a dining room, it was in the barroom where guests registered and paid bills, arranged to board a horse, or booked passage on a public coach. But even more than that, the barroom was a sort of men's community center primarily patronized by local "regulars" to talk about crops and weather, argue about politics, smoke or chew tobacco, play cards, quarrel, and learn about distant goings-on from out-of-town visitors and the newspapers they left behind. Public celebrations such as elections, Independence Day, and other holidays; court sessions; and militia musters turned the barroom into the focus of a town-wide communal binge. 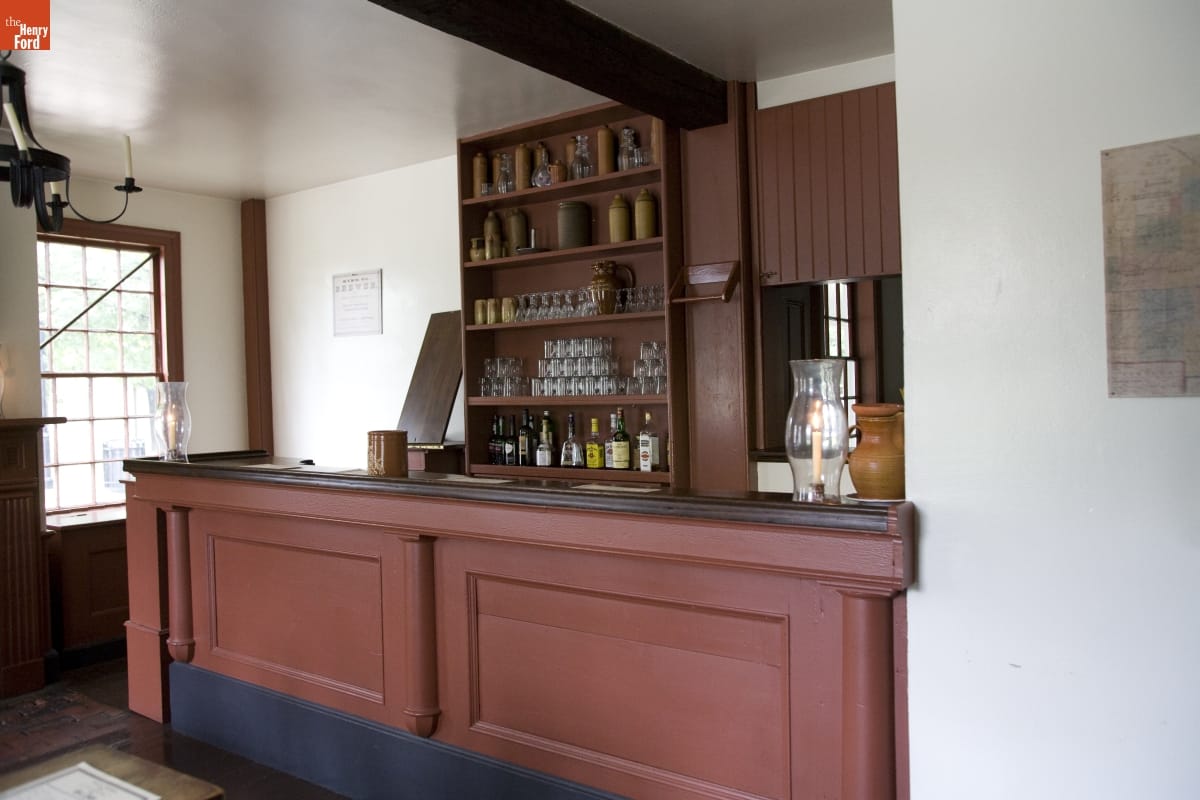 The barroom at Eagle Tavern. Photograph by Michelle Andonian. / THF54347

Drinking, of course, was what bound the barroom's clientele together. Alcohol consumption during the early 19th century reached a per capita peak which has never since been duplicated. In 1838, James Logan, a Scottish visitor to Detroit who echoed most other foreign travelers' accounts of the period, wrote:

“Indeed, drinking is carried to a great height both in Canada and in the State of Michigan. No sooner are they out of bed than they call for their bitters, and all day long they drink at brandy, gin, or whiskey, taking, however, only a wine-glass at a time, which they mix in a tumbler with a little sugar and water. Just enough is taken at once to raise the spirits, and when the excitement subsides, the dose is repeated, so that in this way inebriation is avoided, although a great quantity is taken in the course of the day.” 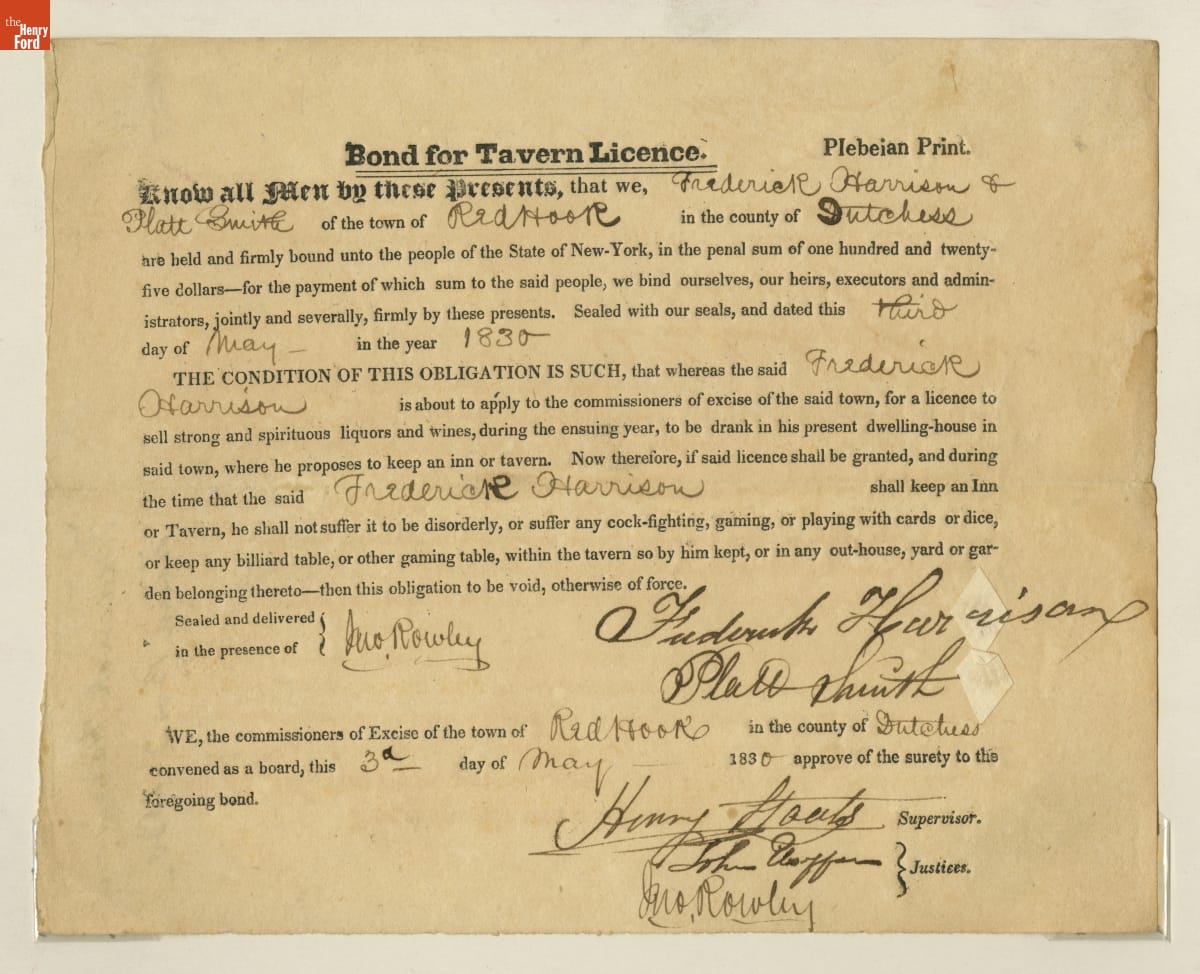 A single modern statistical comparison should serve to underscore Logan’s impressions. It has been estimated that in 1830 the average American male above the age of 15 consumed more than 7½ gallons of distilled spirits per year, while today Americans drink about 2½ gallons of liquor per capita per annum. It is perhaps not surprising that the American temperance movement came into being at this time of unparalleled alcohol consumption. As Capt. Frederick Marryat, the English writer, recorded in A Diary in America, published in 1839:

“They say that the English cannot settle anything properly without dinner. I am sure the Americans can fix nothing without a drink. If you meet, you drink; if you close a bargain, you drink; they quarrel in their drink, and they make it up with a drink. They drink because it is hot; they drink because it is cold. If successful in elections, they drink and rejoice; if not, they drink and swear; they begin to drink early in the morning, they leave off late at night; they commence it early in life, and they continue it, until they soon drop into the grave. To use their expression, the way they drink, is ‘quite a caution.' As for water, what the man said, when asked to belong to the Temperance Society, appears to be the general opinion: ‘It's very good for navigation.’”

What then do we know of what was served in Eagle Tavern's barroom? Whiskey was the beverage of the period. Throughout the upland South and Midwest, whiskey was distilled from a mash composed of a majority of corn and a smaller percentage of other grains. In Pennsylvania and the mid-Atlantic region, rye was the primary grain. Both were straight, unblended spirits. Modern bourbon whiskey and American or Canadian blended whiskey ("rye") are derived from these two beverages. Locally made whiskey was extremely cheap, about $.20 a gallon or $.06 cents a quart.

Rum, the favorite distilled beverage of the 18th century, had declined in popularity (outside of New England) because tariffs on imported spirits, or on the imported molasses necessary to make domestic rum, priced the drink much higher than whiskey. Imported rum from Jamaica and the Virgin Islands (St. Croix) and domestic rum made in Massachusetts were commonly available. Domestic gin, brandy, and fruit brandies were popular. Notable among these was applejack, an apple brandy frequently made in New Jersey. Sweet brandies and cordials were ladies' drinks. Imported Holland gin (often called Geneva), Cognac, Scotch, and Irish whiskey were available but expensive. 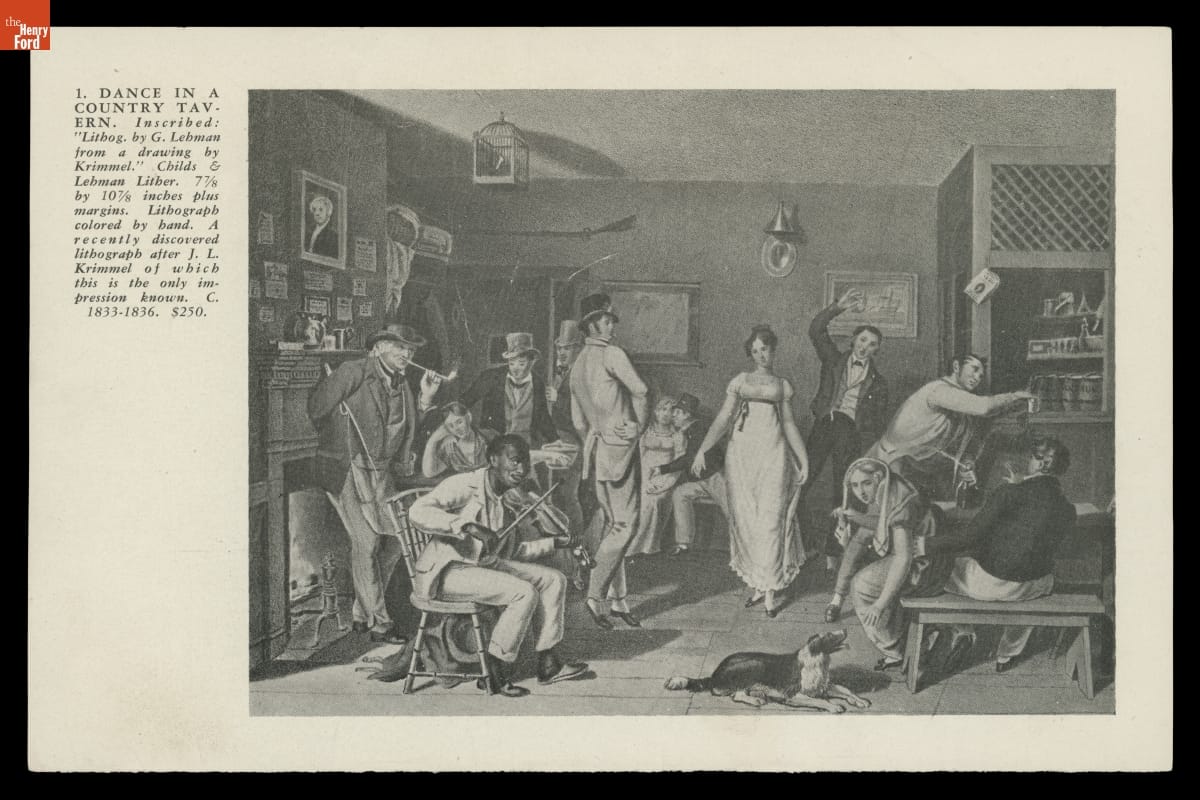 In apple-producing regions, hard cider (simply called "cider") was the most popular fermented beverage. Cider was overwhelmingly popular in late 18th- and early 19th-century New England, and its popularity was carried westward into New York and Michigan by migrating Yankees. Cider was cheap to produce but costly to ship, so a 31-gallon barrel ranged in price from $.50 at a country cider mill to $3.00-$4.00 in an Eastern city.

Beer, which would replace cider in popularity after 1850, was more expensive than cider or whiskey. The ale and beer made at the time were top-fermented products similar to the "bitter" served in English public houses today. Modern American beer is a lager beer (fermented at the bottom of a vat and aged in cold storehouses) introduced by German brewers during the 1840s. Popular during the 1850s in cities such as Milwaukee and Cincinnati with large German populations, lager beer became an American national beverage only after the Civil War. The temperance movement, high wartime taxes on whiskey, and the Union Army's practice of serving lager beer rations all contributed to the elevation of its popularity. 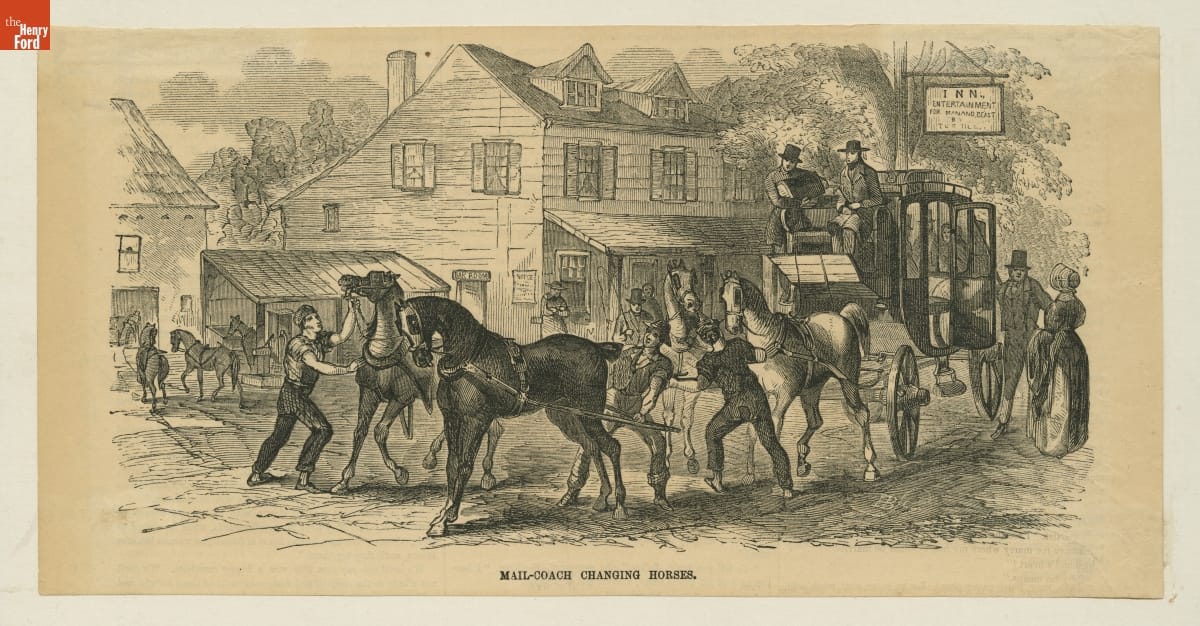 When a stagecoach stopped to change horses, the ladies might well choose a temperance beverage while the men ordered more bracing refreshment. / THF120729

Wine drinking was even less widespread than beer drinking. The only domestic wines available in Michigan were made at wineries near Cincinnati, Ohio, from the Catawba grape native to Eastern North America. The sparkling wines made of this grape were praised by European travelers who compared them to fine French champagne. At comparatively high prices, French red Bordeaux (claret), sauternes and champagne, German Rhine wine (hock), and Spanish and Portuguese fortified wines (sherry, Madeira, and port) were available. Tastes in wines overwhelmingly favored sweet rather than dry types.

Tavern drinking usually entailed "treating." That meant that each man in turn bought a half-pint of whiskey that was passed around the room. Whiskey was normally consumed in a tumbler with or without ice or water and frequently flavored with one of several kinds of bitters. Generally, sweet, mixed drinks known by names such as cock-tails, juleps, smashes, slings, cobblers, sangarees, punches, stone walls, stone fences, etc., were popular in city hotel barrooms and were thought to be more "refined" and thus more suitable for gentlemen (and ladies) than straight whiskey. 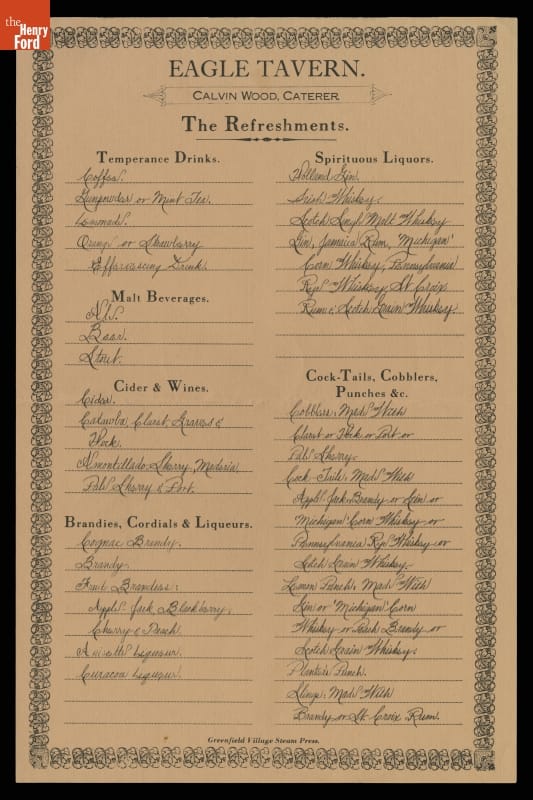 The variety of mixed drinks in 1850 was far more limited than those ingeniously compounded by 20th-century bartenders. But a modern visitor to Eagle Tavern could not be expected to acquire an instant taste for straight corn whiskey. So, in designing our menu, we sought to find 19th-century mixed drinks that were similar in taste to modern drinks. In so doing, we found that the original "cock-tail,” a classic American drink first created in the late 18th century (and supposedly named for the custom of serving it in a glass decorated with rooster feathers), tasted very much like our present-day "Old Fashioned." Similarly, modern visitors to Eagle Tavern find that our "Planter's Punch,” a drink made with rum and citrus juices and first concocted during the 18th century in the British West Indies, is quite comparable in taste to a modern "sour."

Of course, there are also some elements in Eagle Tavern barroom that visitors find amusingly unfamiliar. Most notable among these is the presence of a piece of macaroni in place of a straw or a stirrer in their drink. The reason for this is quite simple. In documenting drinks of the mid-19th century, we found that several, including cobblers and juleps, were invariably served with a straw or "sucker,” as it was often called. Paper straws were not known in 1850, and we were at a loss to understand how we could properly serve such drinks in a 19th-century manner. As fortune had it, the following entry was noticed in an 1848 American dictionary: “Sucker, a tube used for sucking sherry-cobblers. They are made of silver, glass, straw, or sticks of macaroni.” It is little discoveries like this that transform our sometimes dry-as-dust research into an intriguing experience for patrons of Eagle Tavern in Greenfield Village.


Peter H. Cousins is former Curator of Agriculture at The Henry Ford, and led the research into the drinking habits of mid-19th-century Americans for the Eagle Tavern restoration project. This post was adapted from an article in Volume 12, Number 1 of the Henry Ford Museum and Greenfield Village Herald (1983).