During his 1927 summer retreat to Seal Harbor, Maine, Edsel Ford spent time having discussions with his neighbor John D. Rockefeller Jr. on the importance of the national parks to the American public. One year before, in 1926, Arno B. Cammerer, then Associate Director of the National Park Service, had initiated his career-defining project of establishing numerous national parks in the Eastern United States when Congress authorized the National Park Service's Great Smoky Mountains and Shenandoah park proposals. At the time, Lafayette National Park, now Acadia National Park, was the only park east of the Mississippi and despite growing travel to western parks, Cammerer was concerned that only a very small portion of those living east of the Mississippi would ever have the time or the money to visit them.

Realizing that there were millions of people in "the congested areas of the East who never will see the western parks," Cammerer helped the National Park Service establish an unofficial commission composed of park experts to ascertain whether there were lands in the East that would meet the National Park Service standards. The commission, partly funded by John D. Rockefeller Jr., focused on the Southern Appalachian Mountain region, concluding that the lands that would eventually make up the Great Smoky Mountains National Park and Shenandoah National Park should be set aside for the American public. West of the Mississippi, parks could be easily carved out of large public land holdings. In the East, however, a majority of land was privately held which meant that although these Eastern park projects had been authorized in 1926, they could not be fully established until a majority of the land in the planned areas had been bought by the state and deeded to the U.S. government. Cammerer soon realized that land purchasing financed by state funding and small public donations would not be enough to make the Eastern park project a reality.

To remedy the funding problem, Cammerer again turned to one of the wealthiest men in America and the largest benefactor of the East's first national park, John D. Rockefeller Jr. After helping to fund the commission, Rockefeller Jr. had previously mentioned to Cammerer that he was very much interested in continuing his support of the Eastern national parks project. This prompted Cammerer to write him in the beginning of August 1927 at Rockefeller Jr.'s Seal Harbor home, "The Eyrie." Cammerer's letter explained that while he had intended for public donations to be split fifty-fifty between the Great Smoky Mountain project and the Shenandoah project, the Great Smoky Mountains project was further along and more time-sensitive, as some of the lands set aside for the project were being clear-cut of their primitive forests before being sold. Securing the land for the Great Smoky Mountains project had become the utmost priority.

Expressing that the potential Great Smoky Mountains park “appeals to him more than any national park," Cammerer also enclosed photographs in his letter that he thought illustrated the “wonderful scenic character of the country proposed for inclusion in the park.” In Seal Harbor, Rockefeller Jr. brought the issue to the attention of his philanthropic partner, neighbor, and avid photographer, Edsel Ford. Sparking an interest with Edsel to contribute to the project, Rockefeller Jr. relayed to Cammerer that Edsel would possibly be willing to donate, spurring Cammerer to contact Edsel in the beginning of September 1927. In his letter to Edsel, Cammerer added, “I am taking the liberty to enclose a considerable number of photographs showing the superb scenic qualities of the region, which Mr. Rockefeller also has seen, which I believe Mrs. Ford and you will enjoy looking over."

Over the course of September 1927, Cammerer kept sending Edsel information on the Eastern parks project, reiterating that the Great Smoky Mountains park in Tennessee and North Carolina continued to be the top priority. He also explained that the land required for the Shenandoah park consisted of mostly Virginian farmland and would take much longer to acquire. Luckily, the proposed Shenandoah park would include part of the Shenandoah Valley, which happened to be the birthplace of Harry F. Byrd, the Governor of Virginia at the time. The son of a wealthy apple grower from the Shenandoah Valley, Governor Byrd supported the idea of establishing a national park in his state and worked to make it a reality. Governor Byrd's brother, Admiral Richard E. Byrd, also happened to be a world-renowned explorer, pioneering aviator, and friend of Edsel Ford. Edsel would be responsible for helping to fund Richard Byrd's expeditions to the Arctic and Antarctic, including convincing Rockefeller Jr. to aid in funding the latter.

Running the entire length of Shenandoah National Park, Skyline Drive offers 105 miles of scenic views along the Shenandoah Blue Ridge. This souvenir pennant depicts the 670-foot-long Mary's Rock Tunnel -- the only tunnel on the drive. THF239213

Rockefeller Jr. wrote Edsel from Seal Harbor at the end of September looking for a decision, noting that the Great Smoky Mountains project still needed money to purchase land and that Edsel had “expressed an interest in this project" when Rockefeller Jr. saw him in Seal Harbor a few weeks ago. Rockefeller sent him a copy of his pledge hoping that his letter of gift might be suggestive to the amount of money Edsel would donate. Edsel responded the same day saying, "I feel like I would like to help in this great undertaking," but financial obligations like a new home and other philanthropic efforts required him to donate "less than I would like to do if the circumstances were otherwise." Nonetheless, Edsel was "very glad to contribute $50,000 dollars" to the Great Smoky Mountains project and also would "be very glad to consider increasing" the pledge the next year if additional funds were needed. 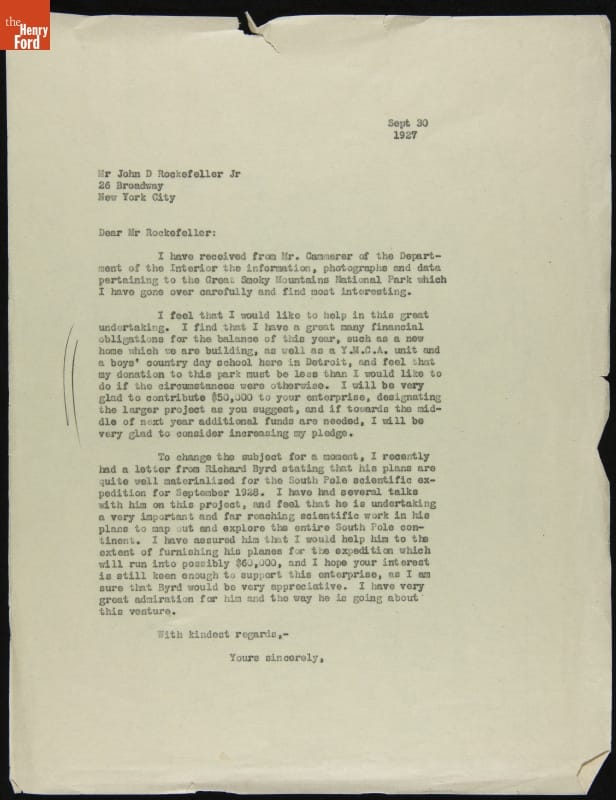 In this letter from Edsel Ford to Rockefeller Jr., Edsel mentions his various other philanthropic activities, including an explanation on how important Richard Byrd's South Pole expedition will be. Due to Edsel's convincing justification above, Rockefeller Jr. would later help fund Byrd's expedition. THF255218

On October 6th, referring to their new partnership in funding the Great Smoky Mountains National Park, Rockefeller Jr. wrote Edsel saying, “It is particularly gratifying to me that we are to be associated together with it." By November of 1927, Edsel had contacted Cammerer to declare that he intended to subscribe $50,000 to help establish the Great Smoky Mountains National Park, which Cammerer graciously accepted. In February 1928 though, the Great Smoky Mountains project hit delays. Lagging fundraising meant that the lands designated for the park, which had yet to be acquired, were still under constant threat of being logged and needed to be procured immediately. The only public pledges to the park had been the ones made by Edsel and Rockefeller Jr. For the park to go forward, five million dollars would need to be raised in order to match the five million dollars in state funds already set aside to buy land for the park. With Edsel's pledge of $50,000 and Rockefeller Jr.'s pledge of $1,000,000, they had fallen well short of that goal. 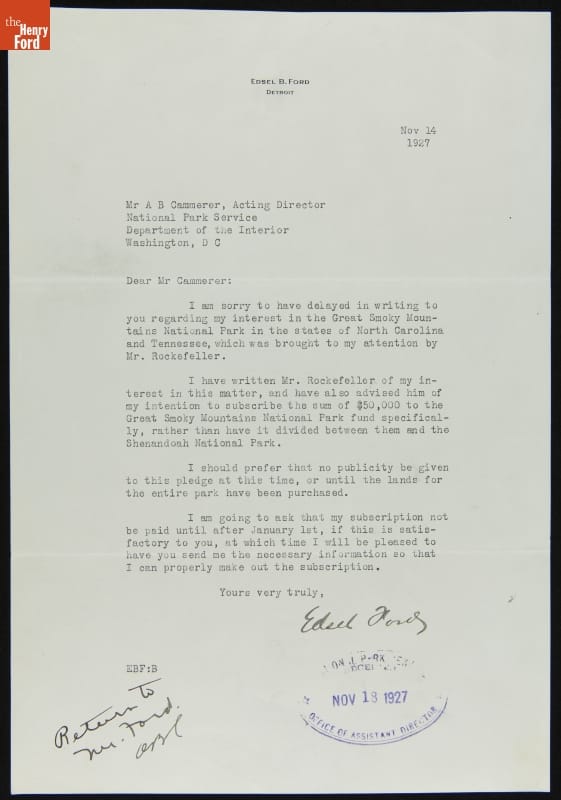 Edsel Ford's signed letter to Arno B. Cammerer, stating that he is interested in contributing to the Great Smoky Mountains National Park project that Rockefeller Jr. had brought to his attention. THF255210

With time being of the essence, Rockefeller Jr. wrote Edsel with his proposed solution to the problem. The trustees of the Laura Spelman Rockefeller Memorial, a fund established by Rockefeller Jr.'s father in memory of his mother and headed by Rockefeller Jr., decided that an enterprise of this kind would have made a "very strong appeal" to Mrs. Rockefeller. The foundation would cover the entire five million dollars needed to match the state funds, helping to acquire all of the land needed to establish the Great Smoky Mountains National Park. With the total cost covered for the first park, Rockefeller Jr. suggested that Edsel transfer his donation over to the Shenandoah project, to which Edsel obliged. 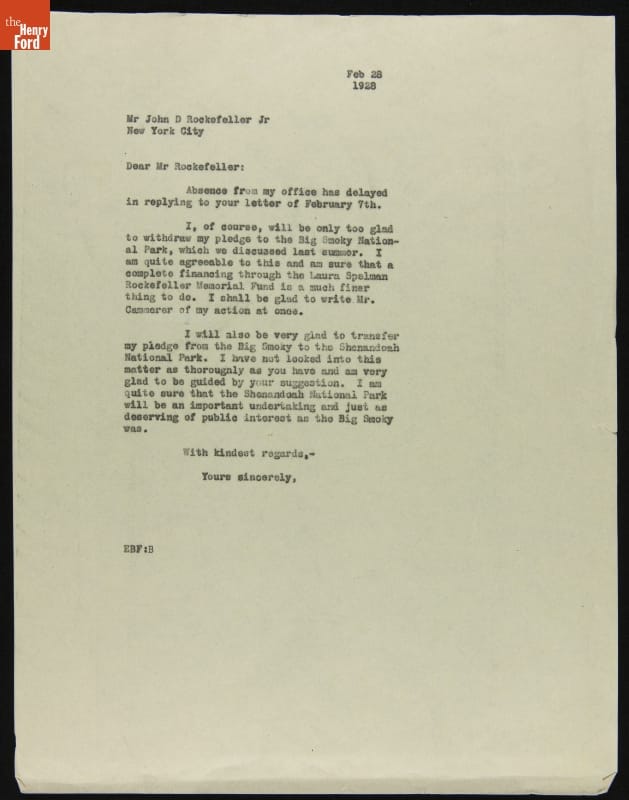 While Edsel admitted that he had not taken a deeper look into the Shenandoah National Park project, he did accompany his family on a 1921 camping trip to the Blue Ridge Mountains of Maryland, a location less than hundred miles north of Shenandoah and geographically similar. Possible memories from this trip could have also played a role in Edsel's decision to donate to Shenandoah. THF255214

On February 28th, 1928, Edsel withdrew his pledge to the Great Smoky Mountains National Park and promptly informed Cammerer that he would be transferring the same pledge over to the Shenandoah National Park fund. Rockefeller Jr. sent a letter thanking Edsel for his understanding and the transfer, ending the note with, “Looking forward to the reunion of our summer colony at Seal Harbor.” Cammerer also sent a letter thanking Edsel for his cooperation, noting, "There is nothing finer available in the East than these two areas selected for national park establishment and this is the psychological time, as the history of our country goes, to still procure these outstanding scenic beauty spots for the millions who will not have a chance to see the western wonderlands reserved in the national park system." Rockefeller Jr. would also contribute to the Shenandoah National Park fund as well. 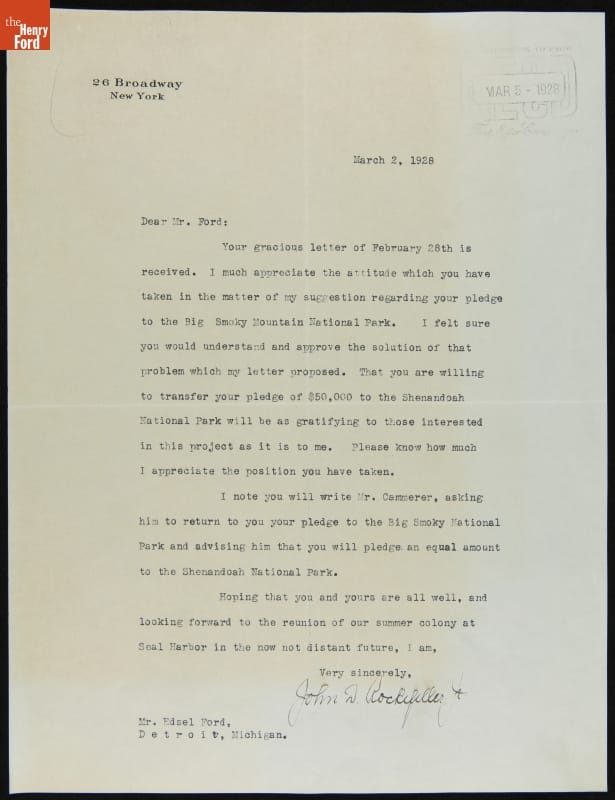 This letter illustrates the pivotal role that Seal Harbor, Maine played in the friendship of Rockefeller Jr. and Edsel Ford. THF255212

In 1932, the state of Virginia began to collect the pledges that had been made to the Shenandoah National Park fund. Edsel reaffirmed his interest in this philanthropic endeavor with a letter to the Governor of Virginia saying, "It has been a great pleasure to contribute" to the fund. By 1935, Shenandoah had officially been established as a national park and, in 1936, they held a dedication ceremony to which Edsel was invited. Unfortunately, Edsel was leaving for Europe soon, which he explained to Cammerer, but his good friend Rockefeller Jr. was able to send a transcript of the dedication speech given by Secretary of the Interior Harold Ickes. Part of the speech thanked Edsel for his contribution. 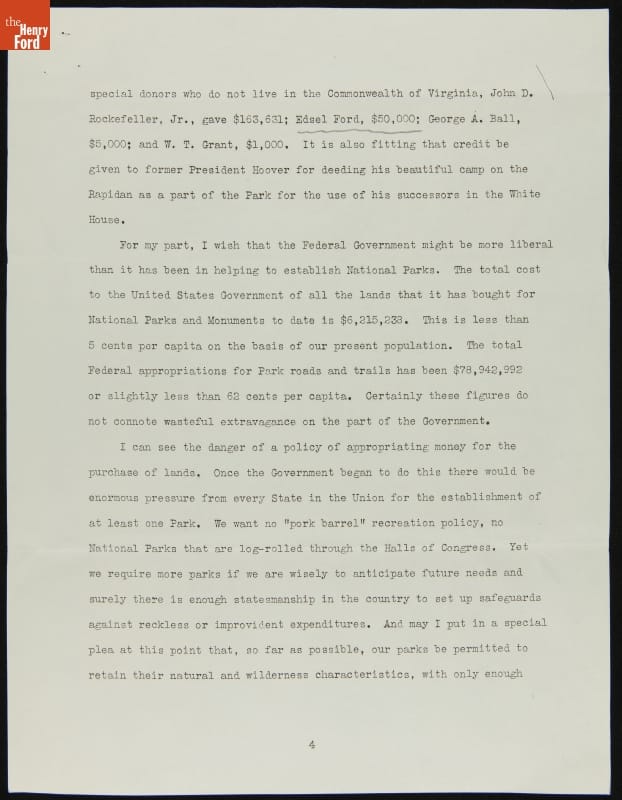 A page from Harold L. Ickes' Shenandoah National Park dedication speech. Named Secretary of the Interior by Franklin D. Roosevelt, Ickes held the position for thirteen years from 1933 to 1946. Known for being brutally honest, tough, and sharp-tongued, Ickes worked with Arno B. Cammerer to dramatically increase national park land even though the two constantly quarreled. THF255228