Innovation Nation: The Wild Web We Can Wear

Forgo the needle and thread — all you need to make clothes from scratch is a computer and an idea.

In fashion, “printed” usually refers to patterned fabric. But when it comes to one company, it actually describes the way clothing is made.

Bay Area-based startup Electroloom is using 3-D printing to create seamless garments that are soft as butter. Its innovative electrospinning process ultimately makes it possible for anyone with some CAD ability to design and produce fabric items on demand. Dubbed field-guided fabrication, it entails making a mold, placing it in the Electroloom machine and watching as 3-D printer nozzles layer microscopic fibers up around it. Still in its infancy, the technology has so far been used to make simple garments such as beanies, tank tops and skirts. 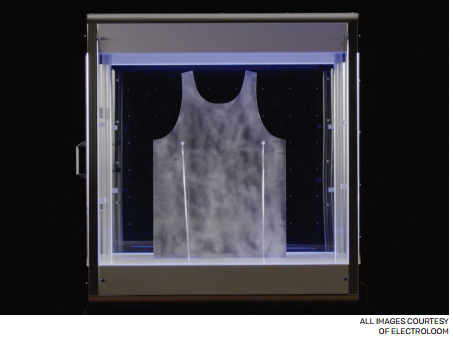 After the Electroloom appeared on The Henry Ford's Innovation Nation earlier this year, The Henry Ford Magazine caught up with co-founder and CEO Aaron Rowley to talk more about the technology and the possibilities yet to unfold.

THF Magazine: How did the idea for Electroloom come about?
Rowley: I’ve been working in the technology industry, as have my co-founders, and we saw an obvious lacking in terms of 3-D-printing capability — it couldn’t make soft goods and material things like clothing, towels, shoes — anything that’s soft and flexible. We wanted to expand 3-D printing to produce those items. We knew that it would be extremely valuable, so we set out on this hypothetical task. We just started prototyping and designing, and that’s where the original genesis came from.

THF Magazine: How has your company evolved?
Rowley: When we first started working, we were in a garage and in our apartments working on the kitchen floor. Then, we began to work out of a technology shop and maker’s space, a community of people that supports a facility that has equipment, classes and training. We also participated in accelerated programs, which catapulted us to the next level. While the origins of this project were truly conceptual, when we were successfully getting fabrics and soft material, that’s what propelled us into building these larger, more robust machines.

THF Magazine: How does the Electroloom work?
Rowley: The simplest way to describe it is that we convert liquids into textiles. Basically, we use electricity to pull on the liquid, and the liquid, as it’s being pulled on, then hardens into a fiber and as you pull that across a gap — let’s say inside of a machine — that liquid converts into a fiber as it dries. The final product is completely seamless.

THF Magazine: So what does the fabric feel like?
Rowley: The fibers that we work with are actually single fibers, really tiny micro- or even nanoscale fibers. They’re very, very small, which makes the material very soft. The fabric has been described as a hybrid between cotton and suede. The texture on the surface is soft like suede, but it’s got the look and dimensions of cotton and polyester with comparable thickness.

THF Magazine: What’s next for the Electroloom?
Rowley: We are in the middle of fundraising right now. We also received a grant from the National Science Foundation specifically for projects pursuing advanced technology and nanotechnology. We are exploring some private investments, too. The goal is to expand the team to refine the technology and, later this year or early next year, have an actual set of machines “out in the wild” as well as our own clothing brand.

THF Magazine: How do you see this technology being applied?
Rowley: We’ve been approached by several clothing brands interested in working with the technology and product design teams who want to work with this method. A few stores are even interested in having the tools in-store to engage with customers. We’re flushing this out to determine what’s most doable in the near future. We’ll be settling on something soon and making some cool announcements.

THF Magazine: Do you really see people using Electroloom to make clothing in their own homes?
Rowley: I try to discern between near-term realistic stuff and what’s our bigger vision. Having people make things in their homes is far off, but the goal is to, over the years, refine this technology so if somebody did want to have this in their home to print fibrous products — from kitchen towels to socks and underwear — to supplement actually going out and purchasing these items in stores, we would love for that to happen and for people to be able to add customization, colors and shapes.

Did You Know?
It takes between eight and 14 hours to encapsulate a mold with printed fibers in the Electroloom.