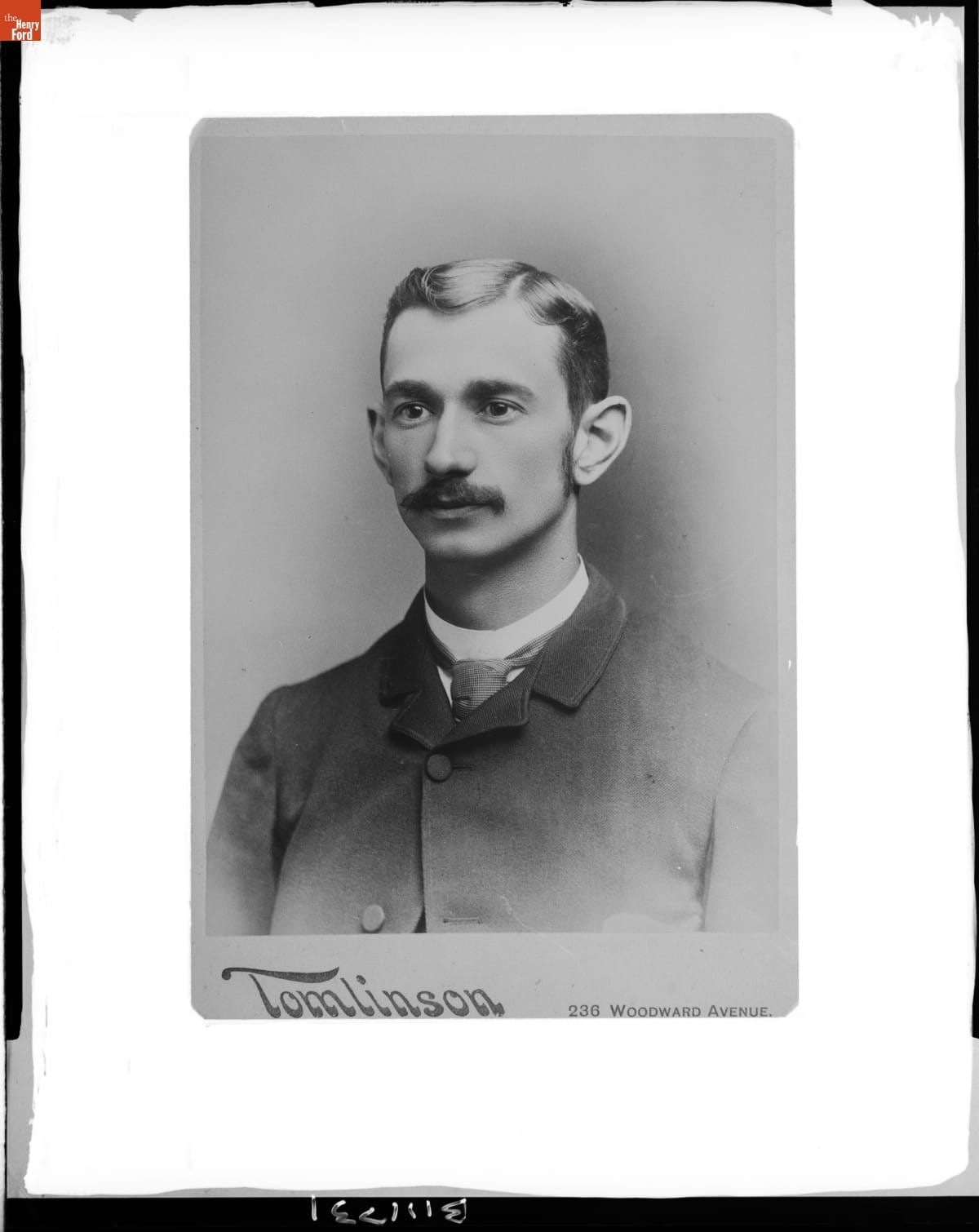 It took only a little bit of capital but a lot of business ingenuity and risk-taking to run a general store in the late 19th century. Because of the great financial risks involved, many storekeepers went out of business and stores changed hands often. The general store in Greenfield Village was one such store, changing hands at least nine times before being purchased by Henry Ford in 1927. J.R. Jones, the store’s proprietor between 1882 and 1888, was like many other storekeepers of his time—low on funds but high on ambition and filled with the dream of prosperity just around the corner.

James R. Jones was the youngest of seven children born to James, a stonemason, and Eliza Webb Jones. James, Sr. and Eliza, both originally from England, had moved to New York State, then to Stillwater, Minnesota (where James R. was born on January 5, 1858), before finally settling in Holly, Michigan, about 1865. 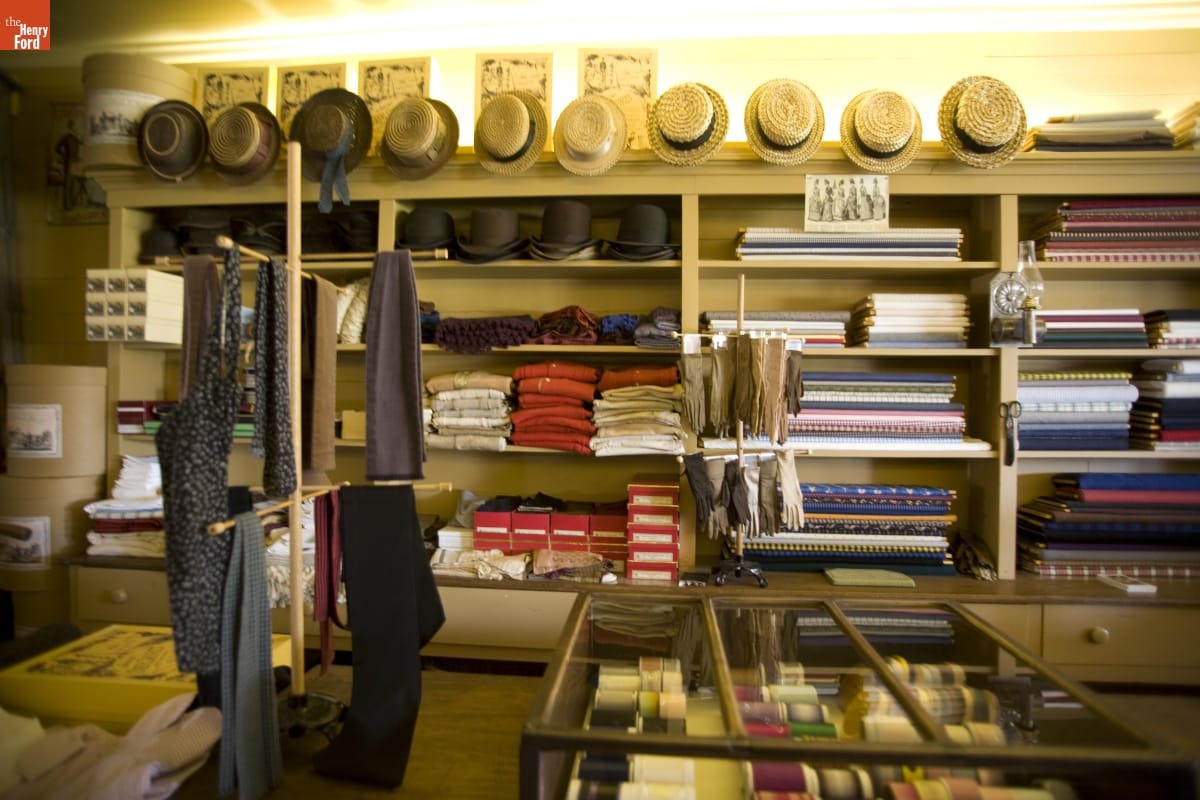 Jimmie (as James R. was called well into adulthood) must have fancied himself quite a salesman when he clerked at his brother’s store while still in his teens. By the time he was twenty, he was already in charge of operating T. G. Richardson’s store in Waterford. And he must have been pretty good at that. A newspaper account of the time reported that, “Mr. James Jones, the accomplished ‘how many yards ma’am,’ from Holly has charge of Richardson’s store here and is well liked.” A few years later, in 1882, he decided to venture out on his own and he took over the proprietorship of the store that would eventually move to Greenfield Village. 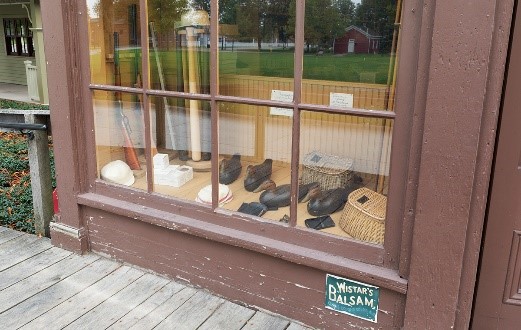 The ingenuity that Jones demonstrated in attracting customers is evident in newspaper accounts of the time. For example, in 1884, “with the enterprise characteristic of the man,” Jones opened up a trade in sporting goods, in which he bought and sold second-hand guns (for the sport of hunting). That same year, as an added incentive for customers, Jones offered a free “chromo” (or colored lithograph) with every large bill of goods. 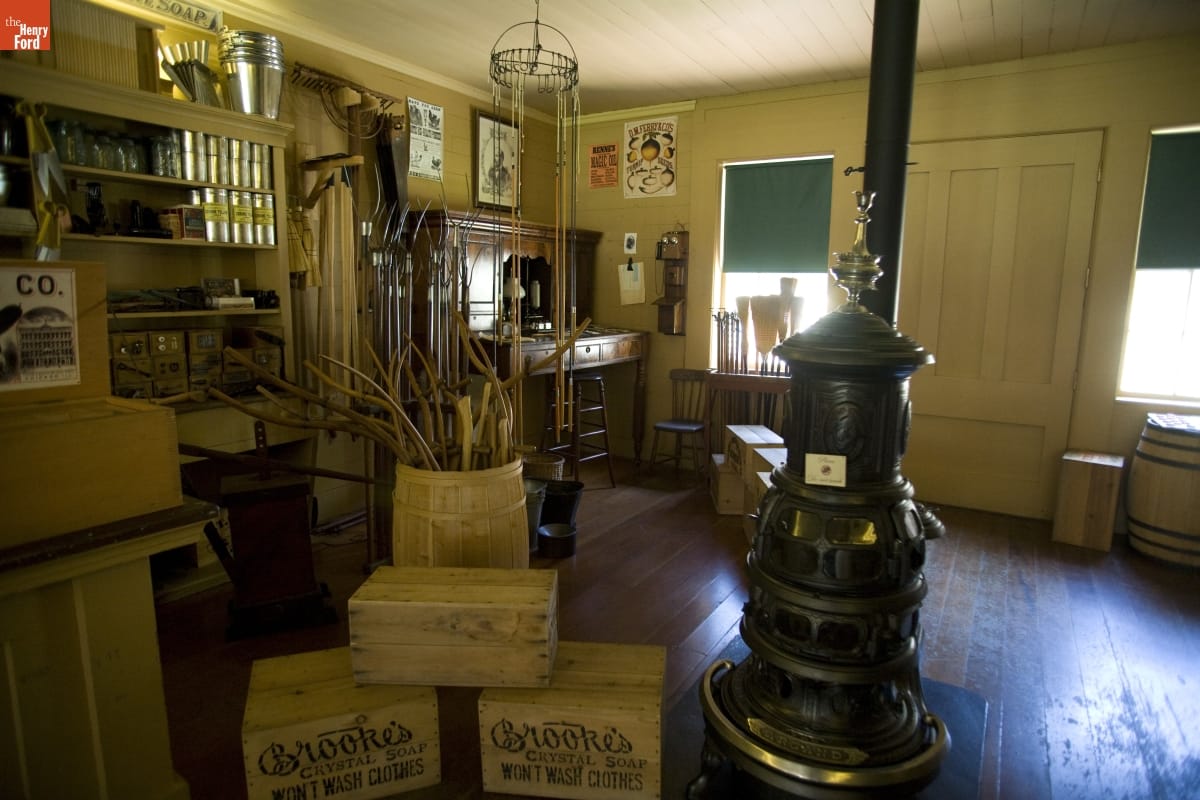 Jones’s desk and office area recreated at the back of the general store in Greenfield Village, with an 1880s-era telephone on the wall (THF53764)

Jones was also resourceful in running his business, drawing customers by having his store serve as the site of the local post office from 1882 to 1885, during the presidency of Republican James A. Garfield, as well as having what was the first—and for a time the only—telephone in town installed in his store (probably in 1882). By 1887, the local business directory referred to Jones not only as a general store merchant but also as manager of the Michigan Bell Telephone Company in Waterford. To remain frugal, he and his wife lived upstairs from the store from about 1883 on, partitioning the space into several small rooms. 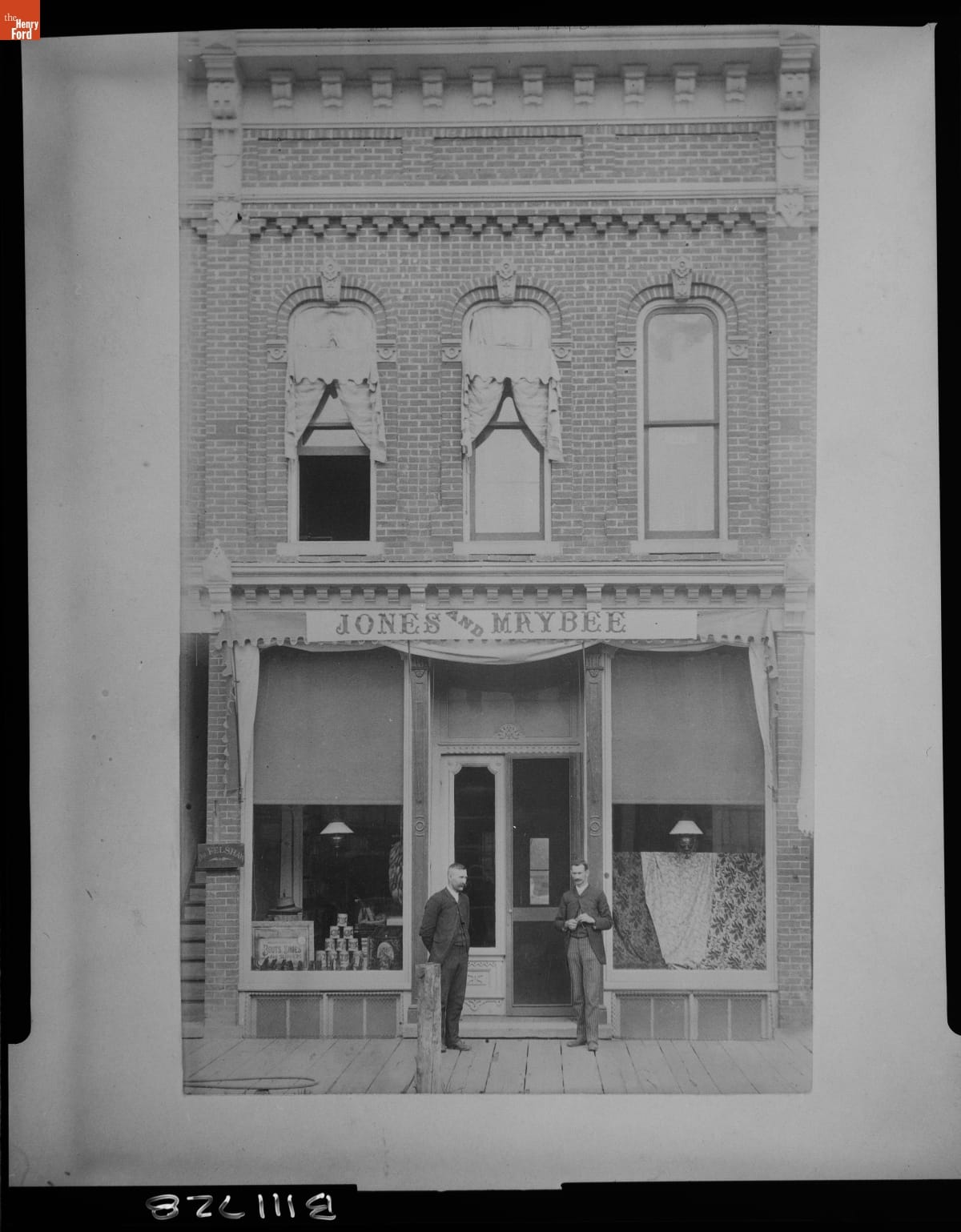 J.R. Jones (right) with his brother-in-law, John Maybee, outside the Jones and Maybee General Store in Holly, Michigan, about 1890 (THF277163)

Around 1887, Jones must have decided that he could not make a profitable go of running the Waterford store. By 1890, he had returned to Holly where he ran a general store with his brother-in-law John Maybee, then he went on to stints as a salesman for the Cyclone Wire Fence Company and as a boot and shoe dealer. 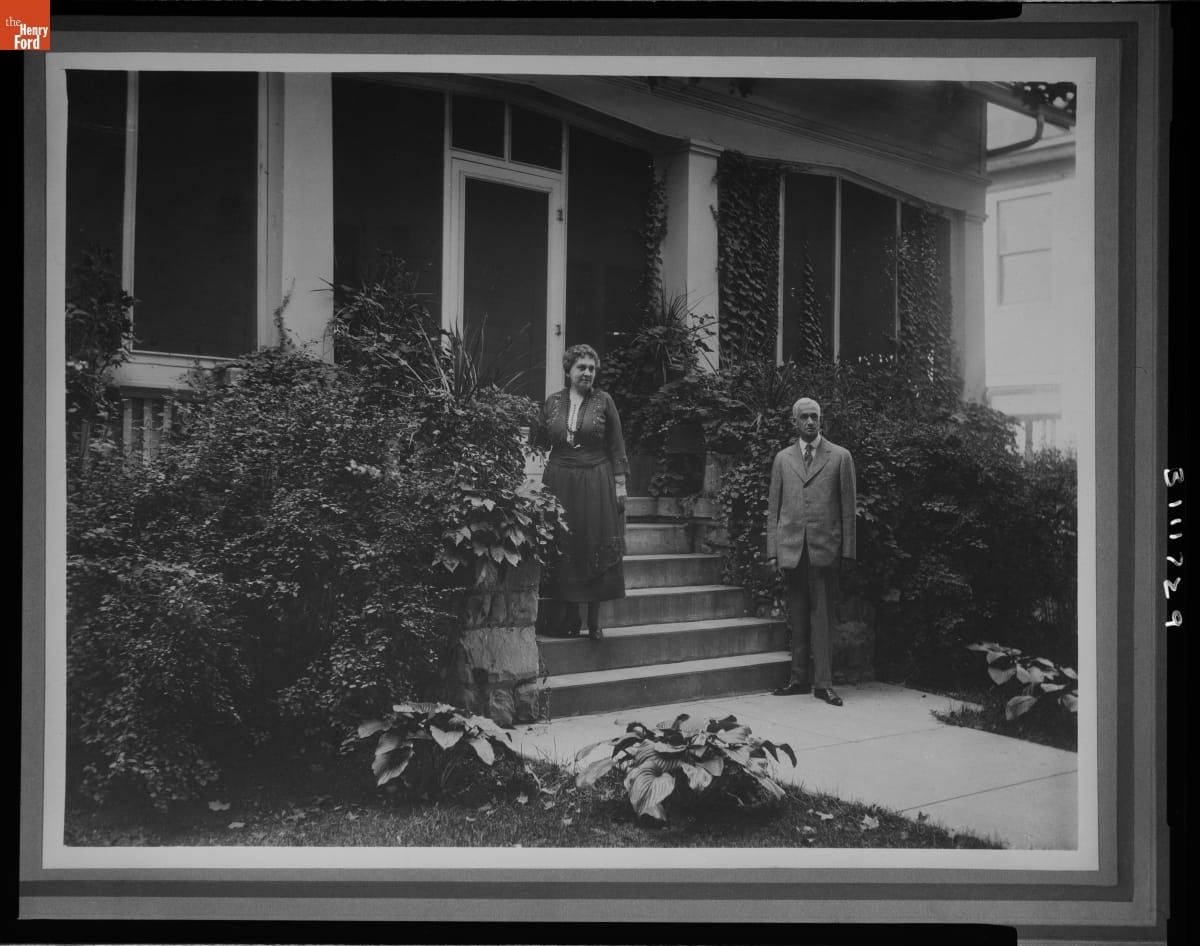 Probably the high point of Jones’s later life came a few years before his death in 1933, when Henry Ford invited him to Greenfield Village to get his reactions to the historic installation he had just completed of the very general store that Jones had operated in Waterford back in the 1880s!

We would like to acknowledge the generosity of J.R. Jones’s great-nieces—Marion H. Roush, Isabel Maybee Stark, and Charlotte Maybee—for providing access to family photos in order to help us document J.R. Jones’s life.