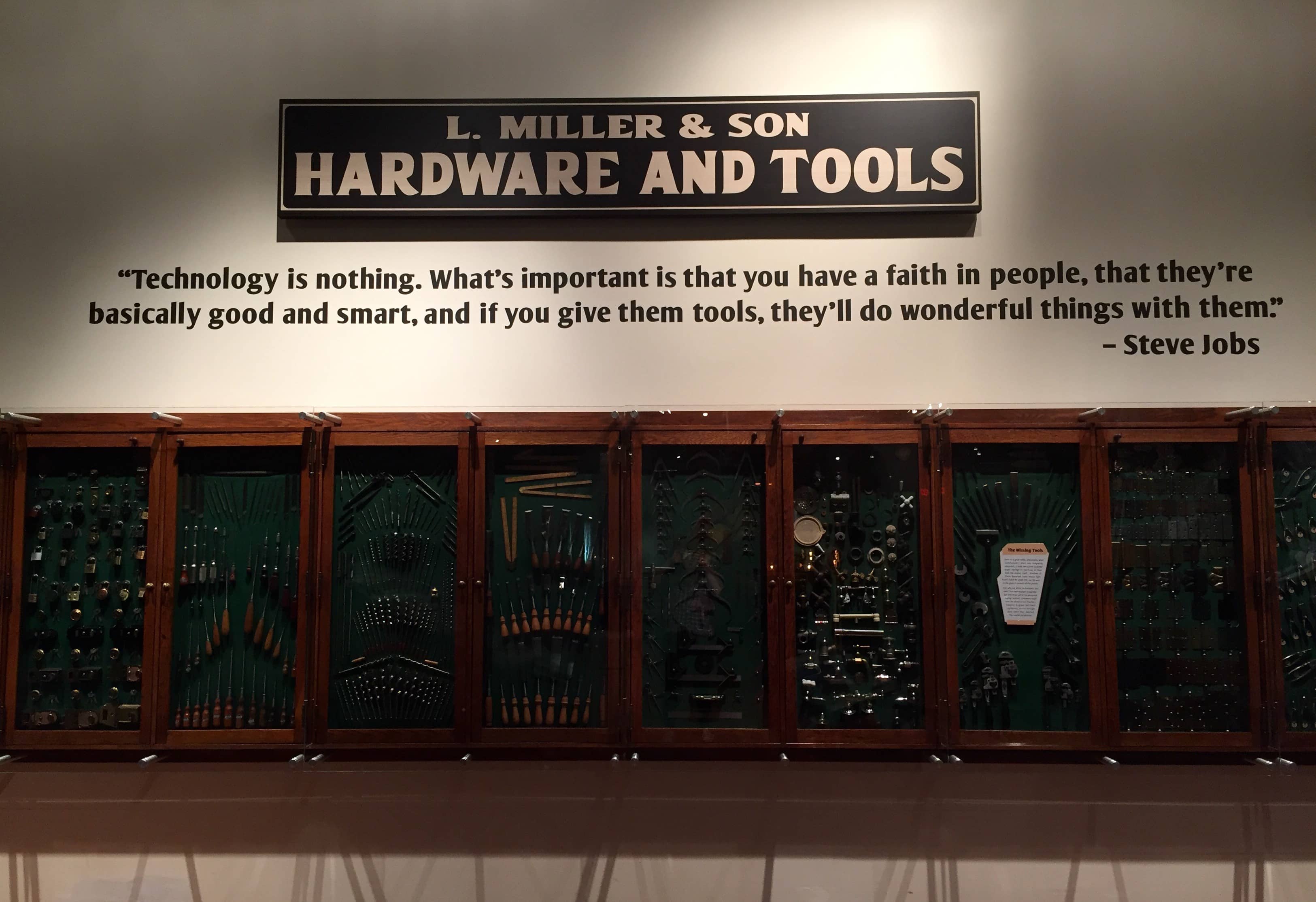 Go to the back of the museum, over in the area filled with hulking power-generating machinery, next to the grey mass of the Spokane water turbine, and you’ll find something new.  Or rather something almost a century old that’s new to the area.  Actually, you’ll find twelve things.  Or rather 795.  Okay, let me explain…

What you’ll find is a group of 12 display panels created in the mid-1920s for the L. Miller and Son lumber and hardware store of 1815 W. Division Street, Chicago, Illinois.  The installation consists of six panels of hand tools and six of hardware, all logically, carefully, and gracefully arrayed on green felt backing, mounted in glass-fronted doors.  Now they are arranged gallery-like on the wall, but originally they hinged out of a floor-to-ceiling cabinet system of shelves, bins, and drawers custom-fitted into the store’s long narrow retail space.

The original business was founded by Louis Miller, a Russian immigrant who had arrived in the United States in 1894.  Miller and his family served a neighborhood made up of immigrants from Poland, Germany, Russia, and Ukraine (the second and third floors of part of the store property housed Russian and Polish social clubs).   The clear visibility of the store’s stock of tools and hardware made it easier for customers with a language barrier to find what they needed.  The display’s elegant arrangement was great salesmanship but could also serve a problem solving function: viewing tools and components is rather like scanning a menu of possible solutions.

The neighborhood underwent several transformations over the years.  The final wave of European immigrants, primarily from Poland, arrived in the 1940s and 50s as refugees; Kennedy Expressway construction cut a wide swath through the area, and once completed in 1960 served to cut it off from neighborhoods to the east; by the 1970s many residents were fleeing to the suburbs and the area was becoming rife with gang activity.  The store, in its original location on Division (the “Polish Broadway” that served as the dividing line between the Wicker Park and East Village neighborhoods), endured through all these changes except for the most recent: gentrification.  The subsequent rise in property taxes finally prompted the need for the company to move to a new location.

How Did the Exhibit Make Its Way to The Henry Ford?
During the 1950s the owners had already phased out the hardware side of the business in order to concentrate on lumber and construction materials.  The display remained in place, fondly remembered—and occasionally visited—by a dwindling number of locals.  In early 2011, with the business’s move looming, owner Bob Margolin (grandson of the founder) and I began to discuss The Henry Ford’s potential interest in acquiring the display.  In April Bob indicated that he would be travelling to Michigan on business and we agreed that bringing a sampling of the display—a panel or two to look at more closely—would be a good idea.  On the sunny afternoon of Friday April 29 I went out to meet him in our employee parking lot adjacent to Lovett Hall: he hadn’t brought a sampling, he’d brought the entire display, and had already started carefully propping the panels adjacent to one another against the side of his van—much to the fascination and enthrallment of numerous staff leaving for the day.  An amazing sight, it was as if the display had lurched out of the shadows to literally claim a day in the sun—and offer a kind of final proof of its sales power, even though there was no longer any stock of tools for it to sell.

The acquisition went ahead.  Now, precisely five years later, the display is on exhibit.  It is a museum of tools within a larger museum.  It is an artifact in its own right but it is made up of artifacts.  It is made up of stunningly ordinary stuff—the workaday items ordinarily built into homes or hidden in toolboxes—but it celebrates everyday practicality and resourcefulness.  Like a great many museum artifacts it is a paradox: in a state of rest, set sparkling in Made in America—but also active, continuing to work its magic, prompting an urge to build, fix, construct—making you want to somehow do something…

Learn more about the L. Miller and Son Hardware and Tool Display in this collection of artifact cards.