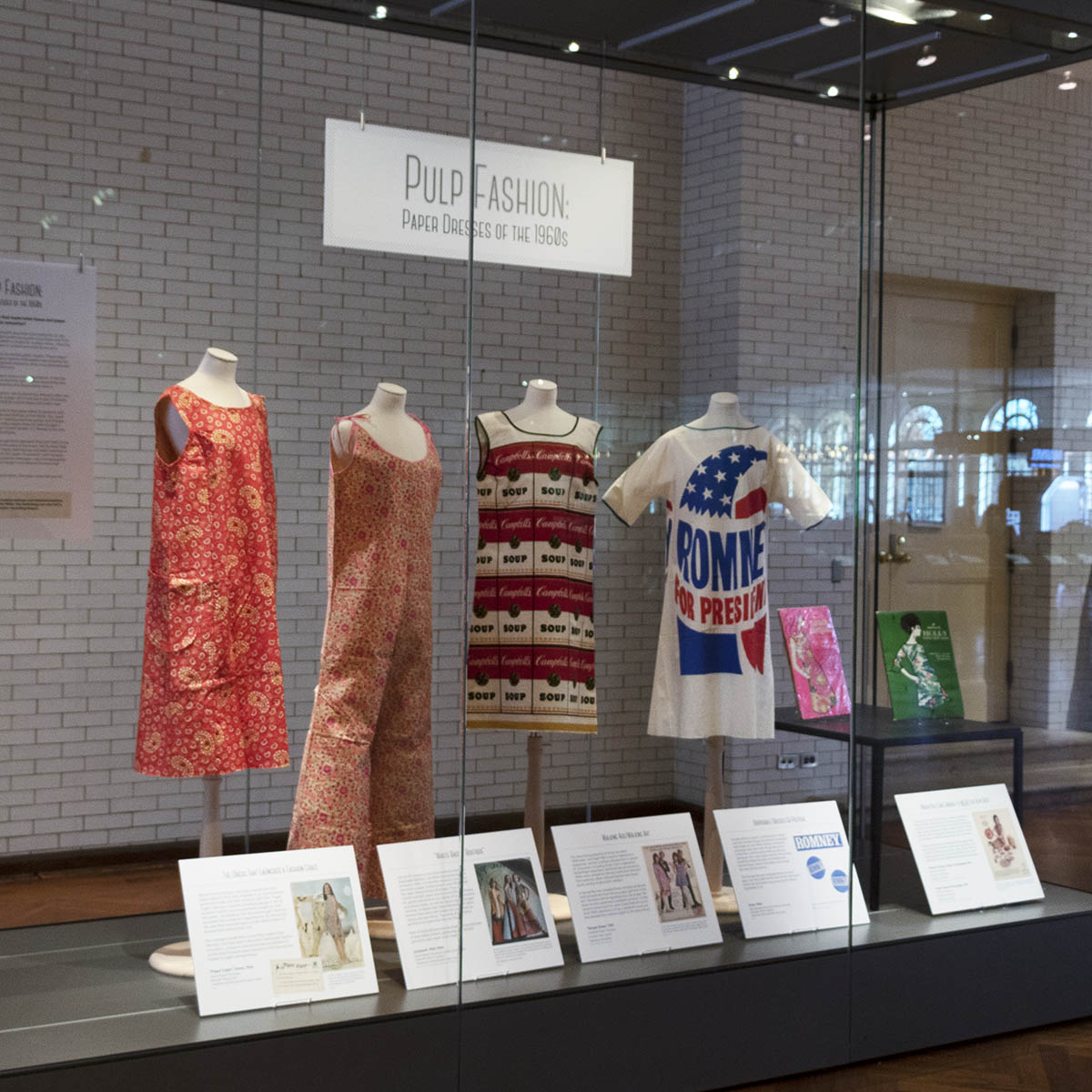 Another group of garments from The Henry Ford’s rich collection of clothing and accessories makes its debut in “What We Wore” in Henry Ford Museum of American Innovation.

Who knew that a company that made toilet tissue and paper towels would start a fashion sensation?

In April 1966, the Scott Paper Company launched a promotion for its new line of colorful paper products. Along with two proofs of purchase and $1.25 for shipping, customers could redeem a coupon for a paper dress, choosing from a red paisley bandana pattern or a black-and-white op art print.

The media took immediate notice. So did the public. Scott’s “Paper Caper” dresses became a surprise hit. Soon fashion enthusiasts were wearing not only Scott’s dresses, but paper apparel created by other manufacturers and designers who quickly joined in the trend.

The 1960s was an era of exploration and pushing boundaries. It was the space age--people envisioned an exciting future where everything was conveniently automated. New materials and disposability were in.

Paper apparel promised convenience--you could simply discard it after one wearing. Altering the hemline was a snap--all it took was a pair of scissors and a steady hand. A tear? You could do a quick repair with sticky tape.

The A-line shape and trendy prints of the paper dress fit perfectly with the youthful “Mod” look and aesthetic sensibilities of the 1960s. You could be up-to-the-minute at little cost--clothing could be quickly and cheaply replaced as trends shifted. There was a paper dress for every budget--from those on the shelves of mass-market retailer J.C. Penney to the chic creations carried by Manhattan boutiques.

People bought over a million paper garments between 1966 and 1968. Some envisioned throwaway clothing as the wave of the future. Yet, by early 1968, the craze was beginning to cool. Paper clothing was not really practical or comfortable for everyday use. And the hippie movement--with its back-to-nature values and strong anti-pollution message--was changing public opinion. What had seemed hip and modern now seemed frivolous and wasteful.

A bit of novelty in an era of experimentation, the paper dress fad was fun while it lasted.

The Dress That Launched a Fashion Craze 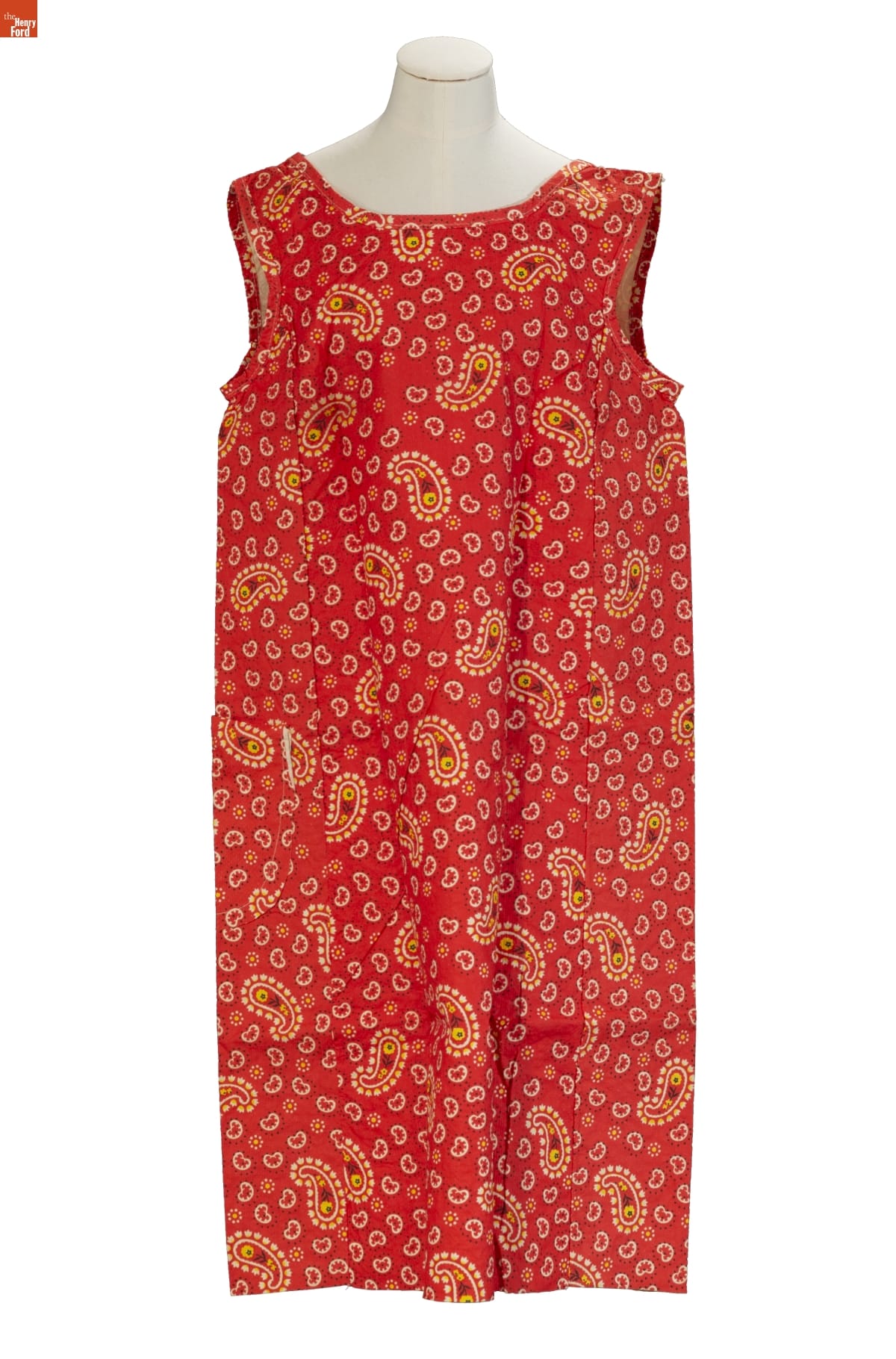 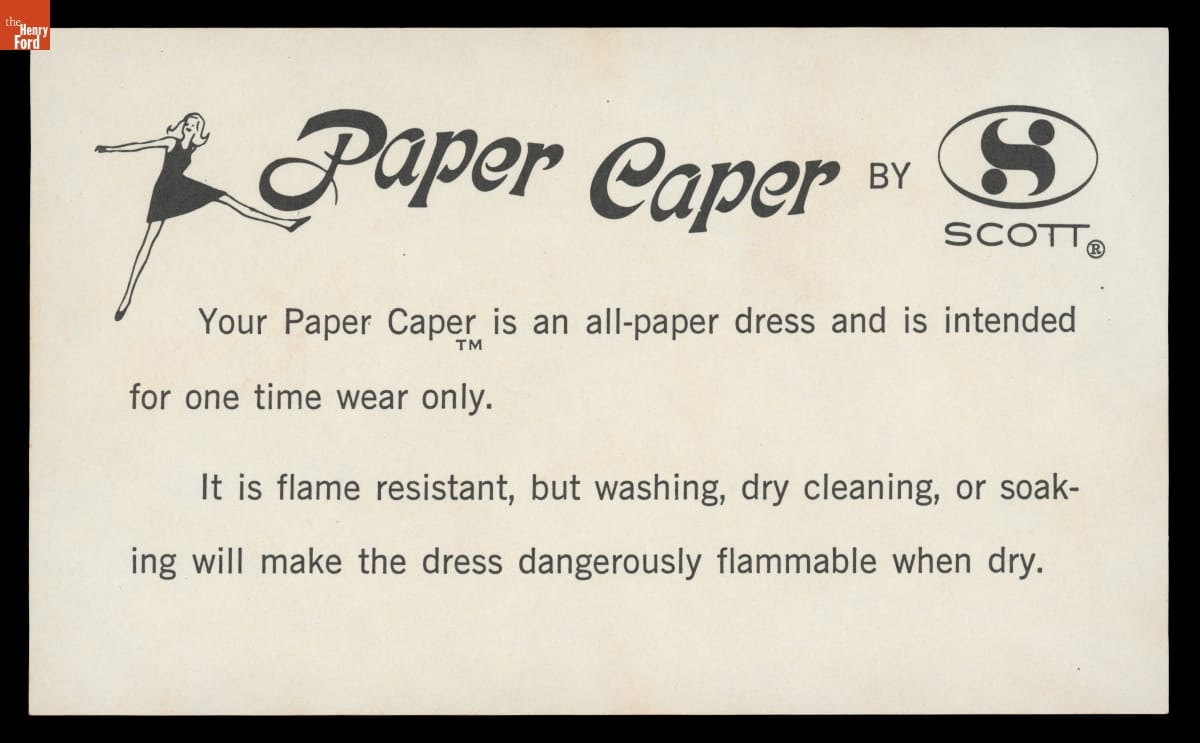 When the Scott Paper Company created the first paper dress in 1966, they intended it as a promotional gimmick to help sell their products. But their “Paper Caper” dresses--a paisley bandana design or an Op art print--swiftly and unexpectedly caught on with the public. The publicity the dresses brought Scott far exceeded the company’s expectations. By the end of the year they received nearly a half million orders for dresses they sold at near cost.

The company made little money from sales of the dresses--but that wasn’t the point. Inadvertent fashion innovators, company executives had no intention of continuing the paper dress venture in 1967, leaving the market to eager entrepreneurs. 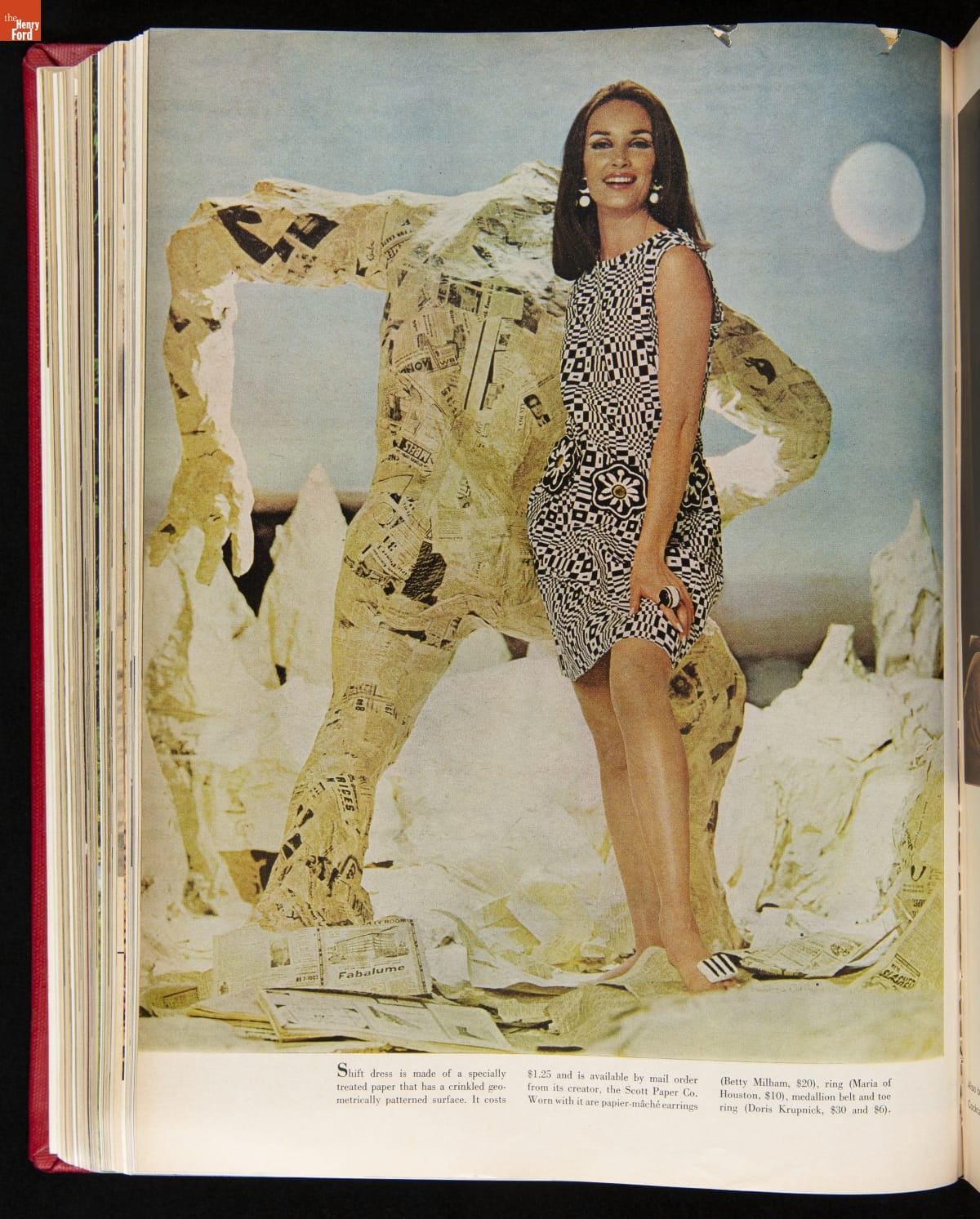 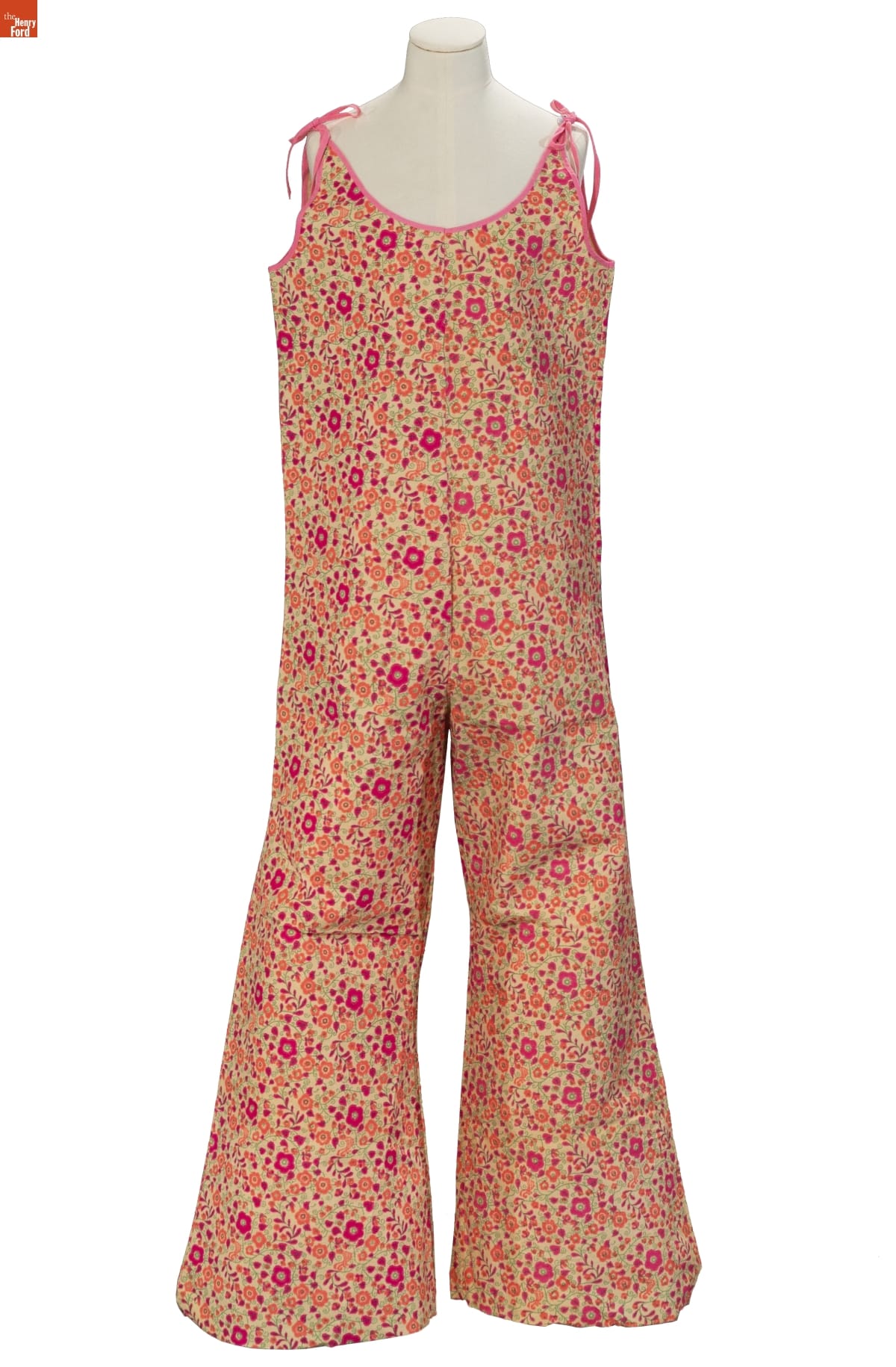 Paper Jumpsuit by Waste Basket Boutique by Mars of Asheville, 1966-1968. / THF185294 (Gift of the American Textile History Museum. Given to ATHM by Cathy Weller.)

The Scott company’s success started a trend for disposable fashion--so other companies quickly jumped in. Mars of Asheville, a hosiery company, launched a paper fashion line in June 1966 under the label, Waste Basket Boutique. They sold colorful printed-paper dresses and other garments for adults and children in a variety of strap, neckline and sleeve styles, as well as “space age” foil paper clothing. In September, Mars debuted plain white dresses that came with watercolor paint sets for “doing your own thing.” Pop artist Andy Warhol painted one to promote the new line.

Mars of Asheville became the leading manufacturer of disposable fashion, producing over 80,000 garments each week at its height. 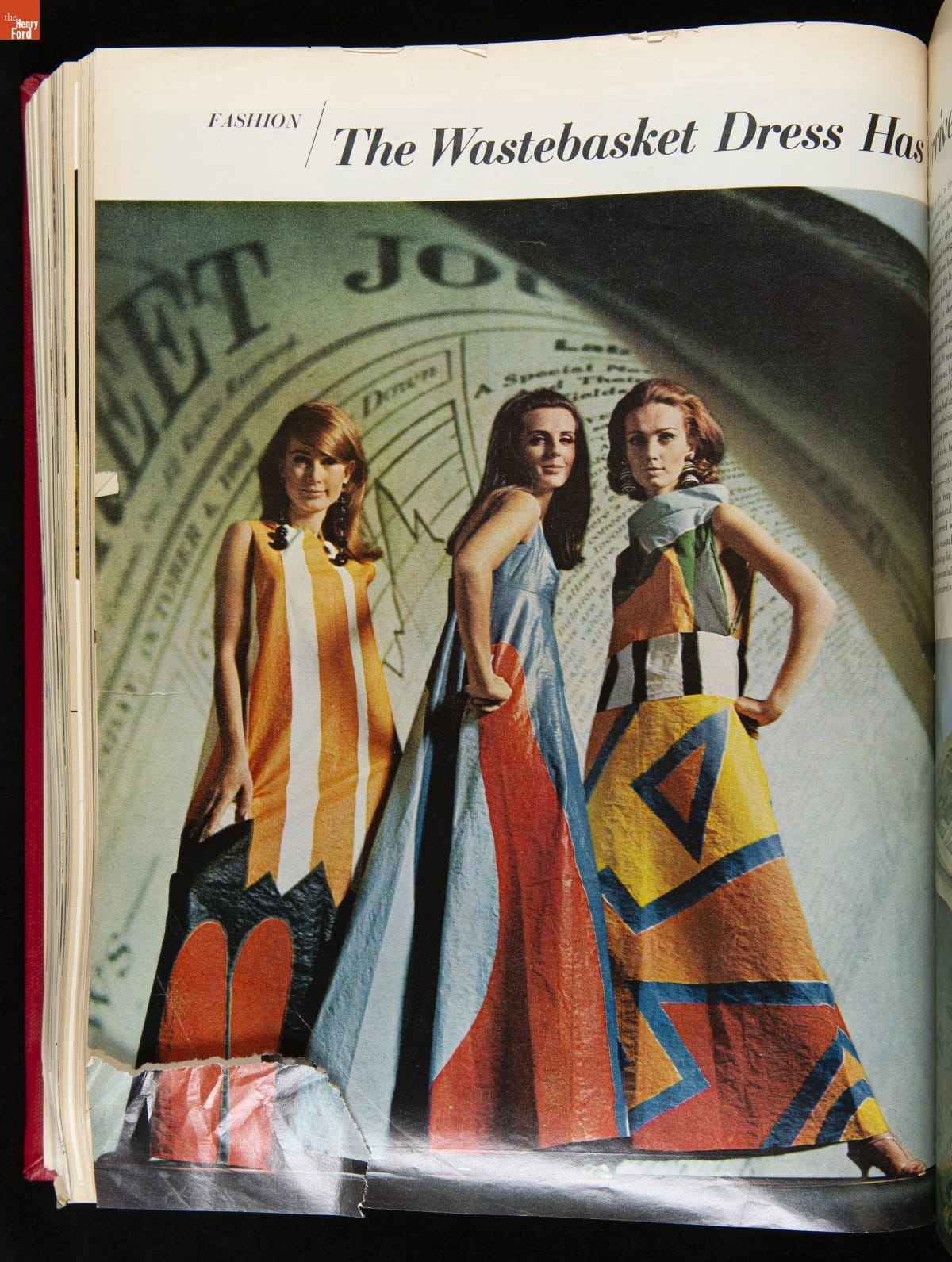 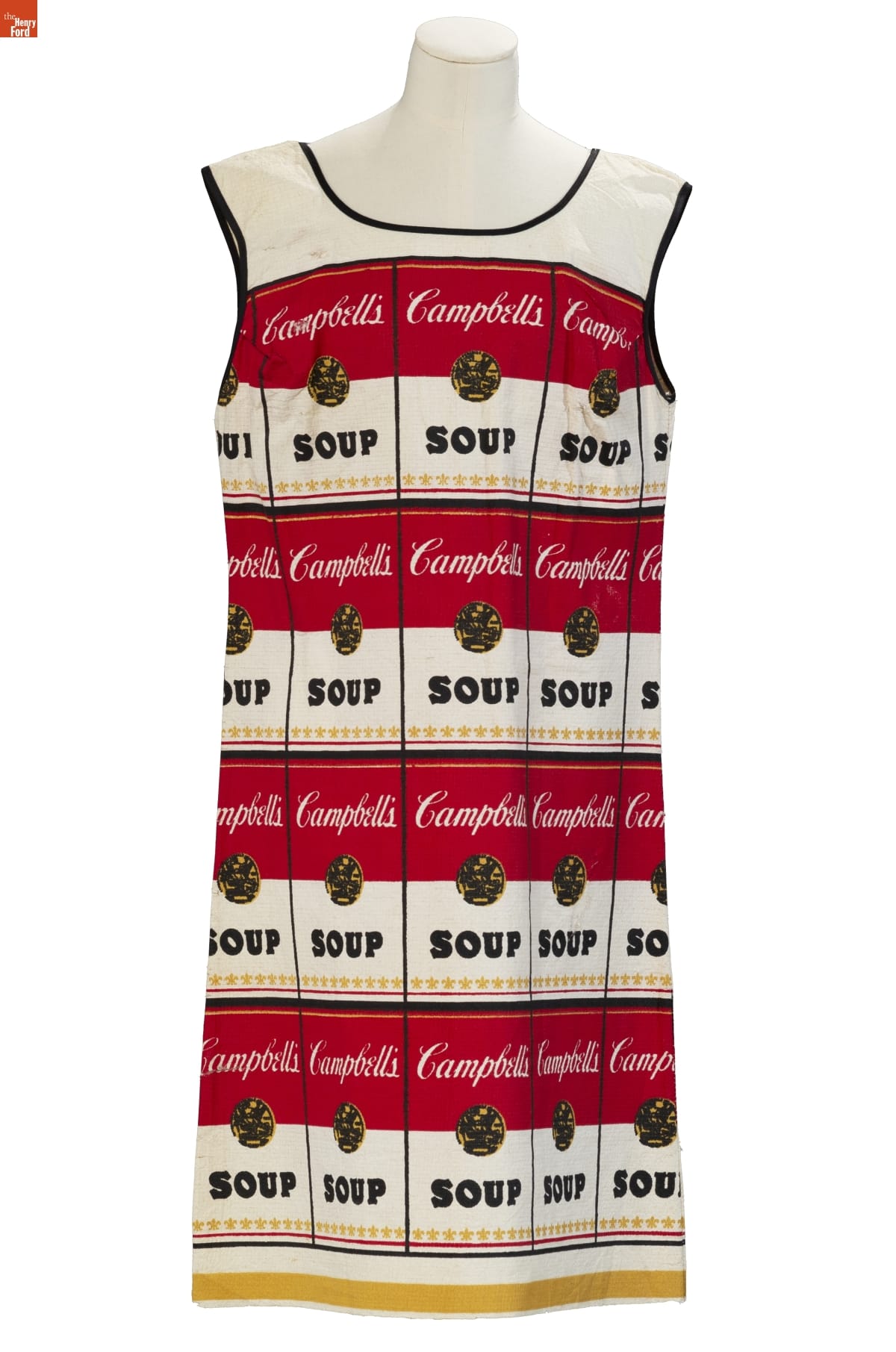 The advertising potential of these wearable “billboards” was huge. With coupons clipped from magazines, women could buy dresses from a variety of companies, including Green Giant vegetables, Butterfinger candy bars, and Breck hair care products. While some companies offered motifs that reflected their products, others followed fashion with flower power, paisley, or geometric designs.

In Spring 1967, the Campbell Soup Company produced what became the most famous paper garment of the era--this dress with its repeating soup can image. The dress not only advertised Campbell’s products--it also cleverly referenced Pop artist Andy Warhol’s iconic early 1960s depictions of the Campbell’s soup can that elevated this ordinary object to the status of art. 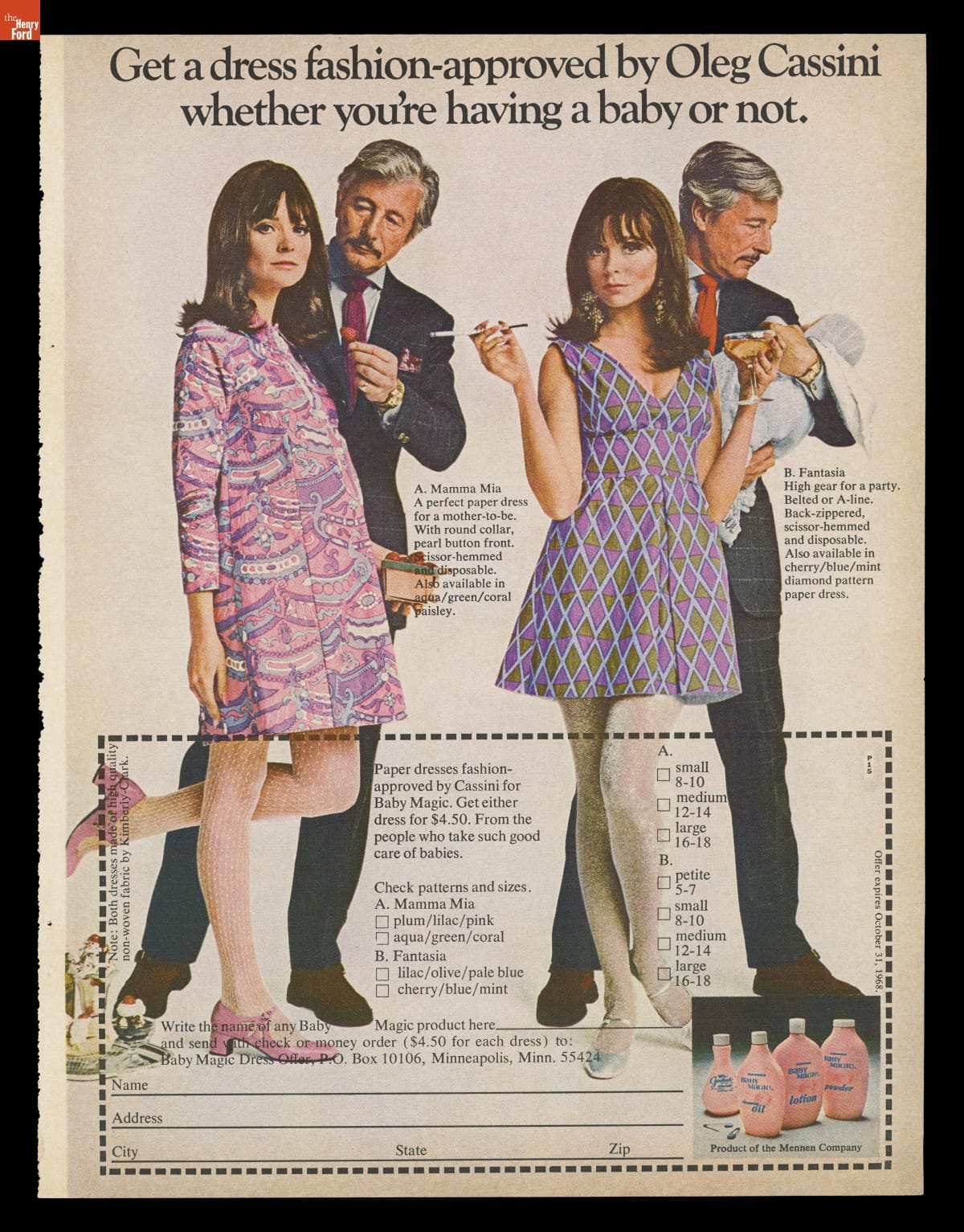 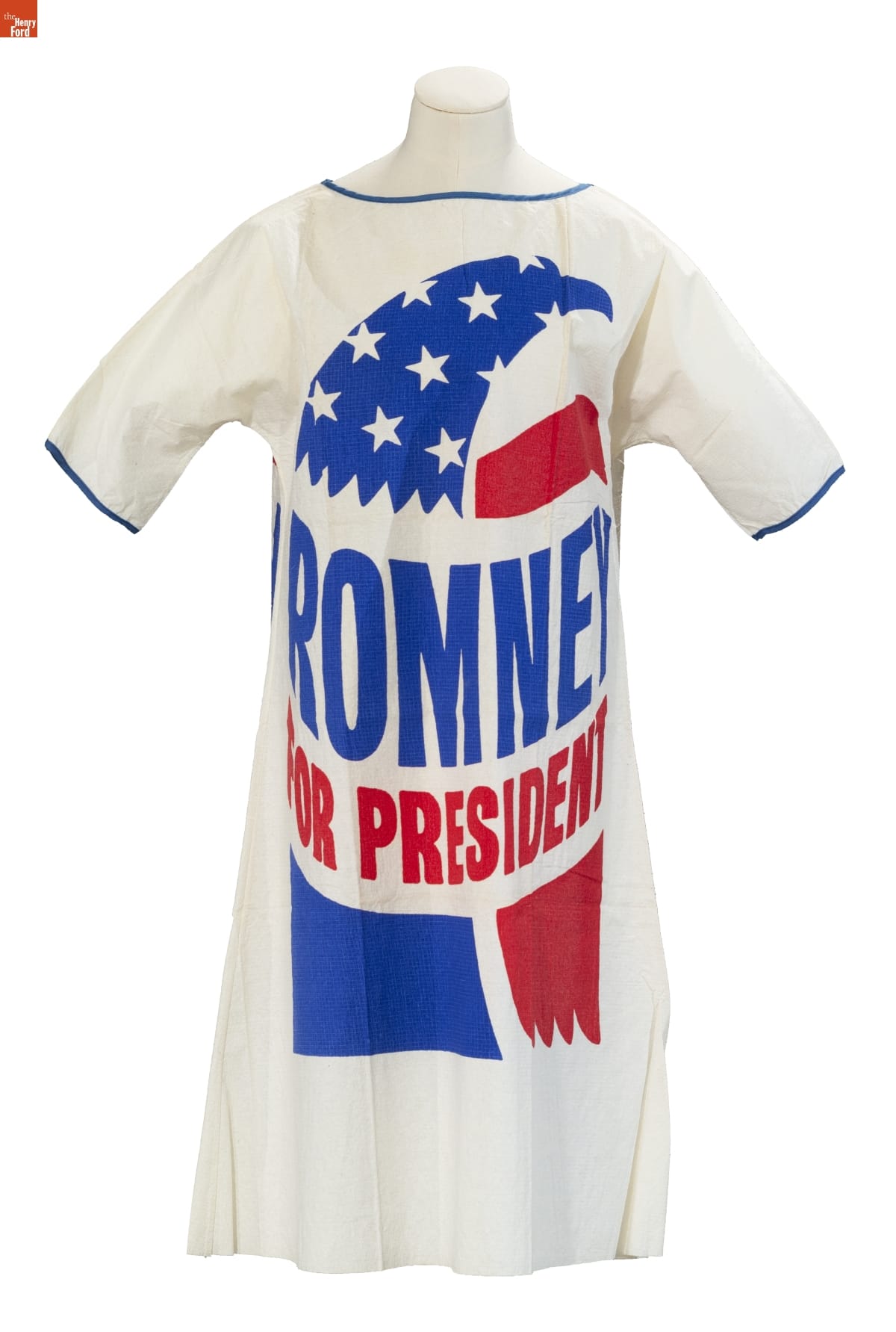 Bumper stickers, buttons, and brochures--those were the standard things that political campaigns were made of in the 1960s. Beyond “standards,” campaigns also latch onto things that are hot at the time—and during the 1968 presidential campaign, that meant paper dresses. Democratic candidate Robert Kennedy and Republicans Richard Nixon, Nelson Rockefeller, and George Romney all had versions.

This George Romney campaign dress may have been “hip,” but it didn’t do the trick for him--Romney’s bid for the nomination was unsuccessful. Nelson Rockefeller’s too. 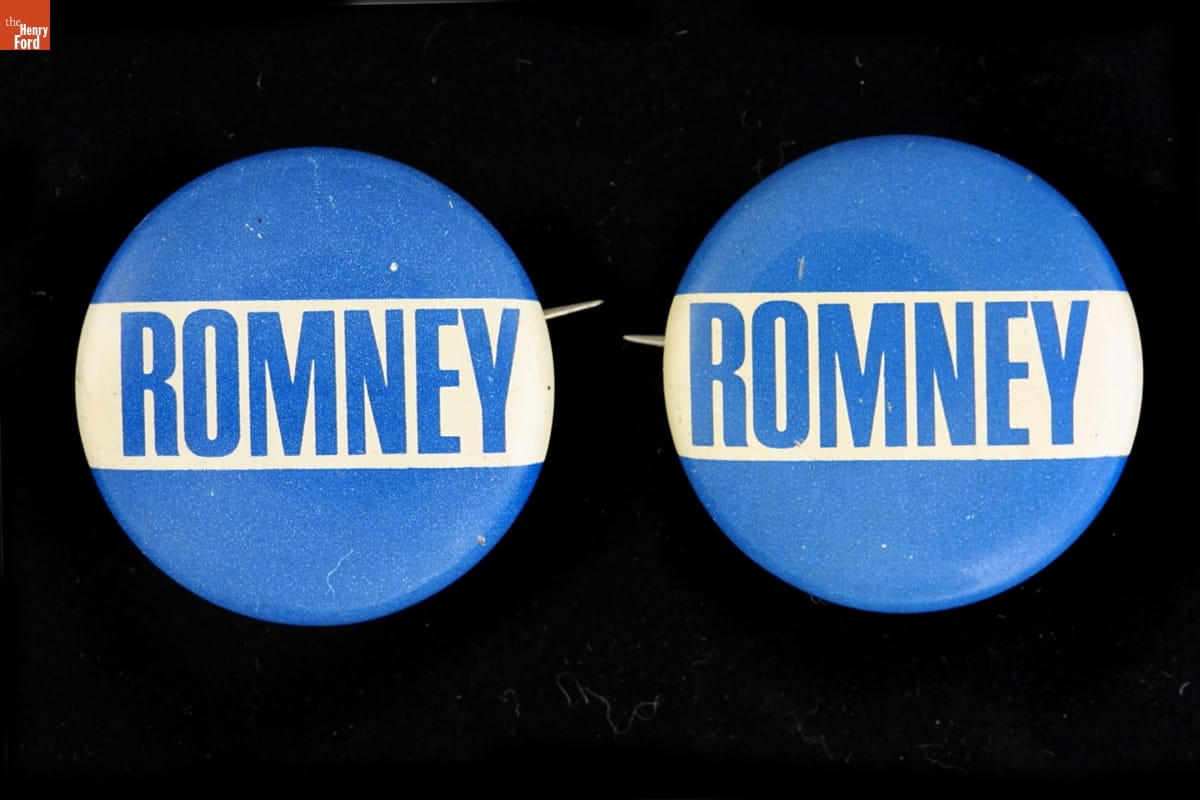 When You Care Enough to WEAR the Very Best 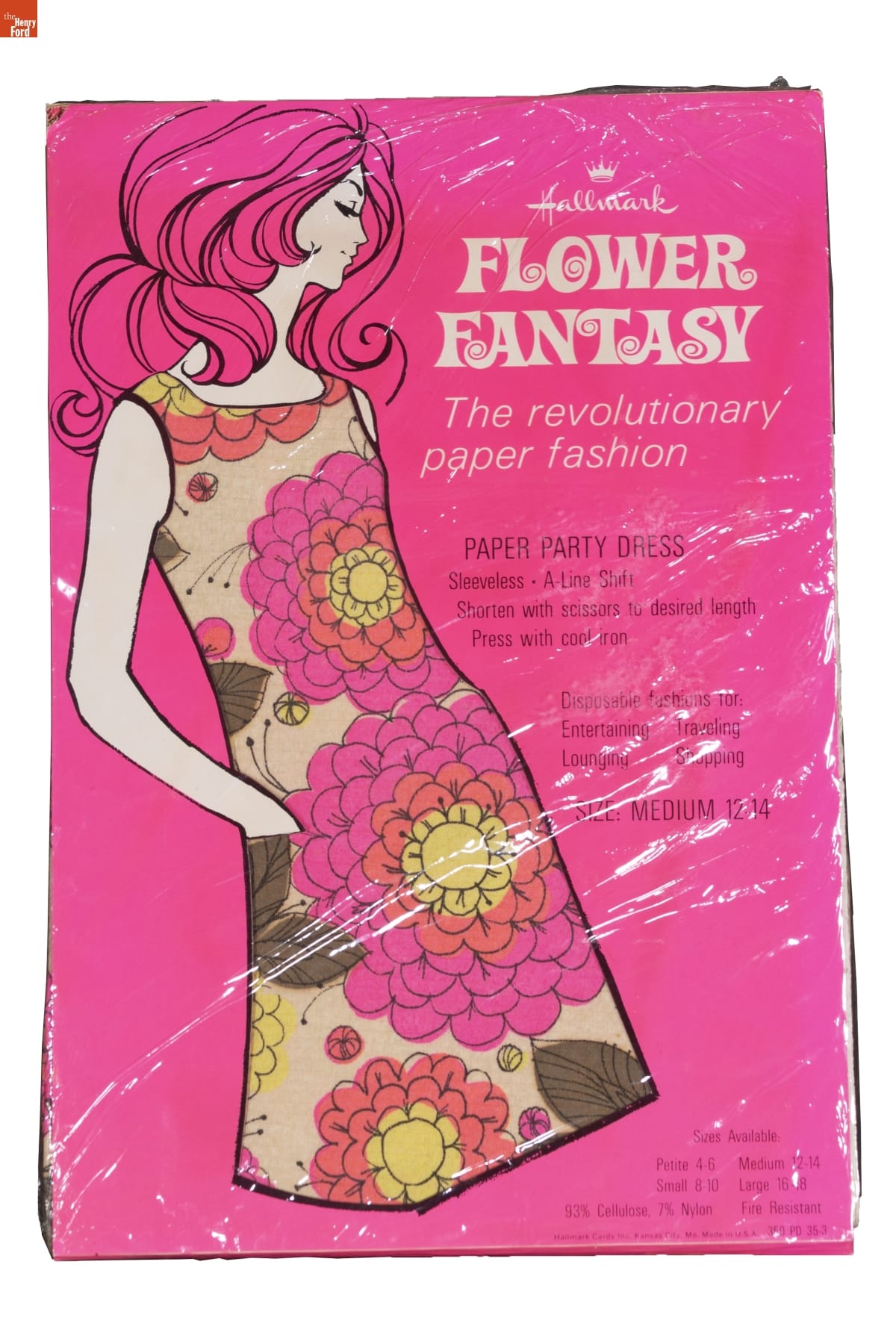 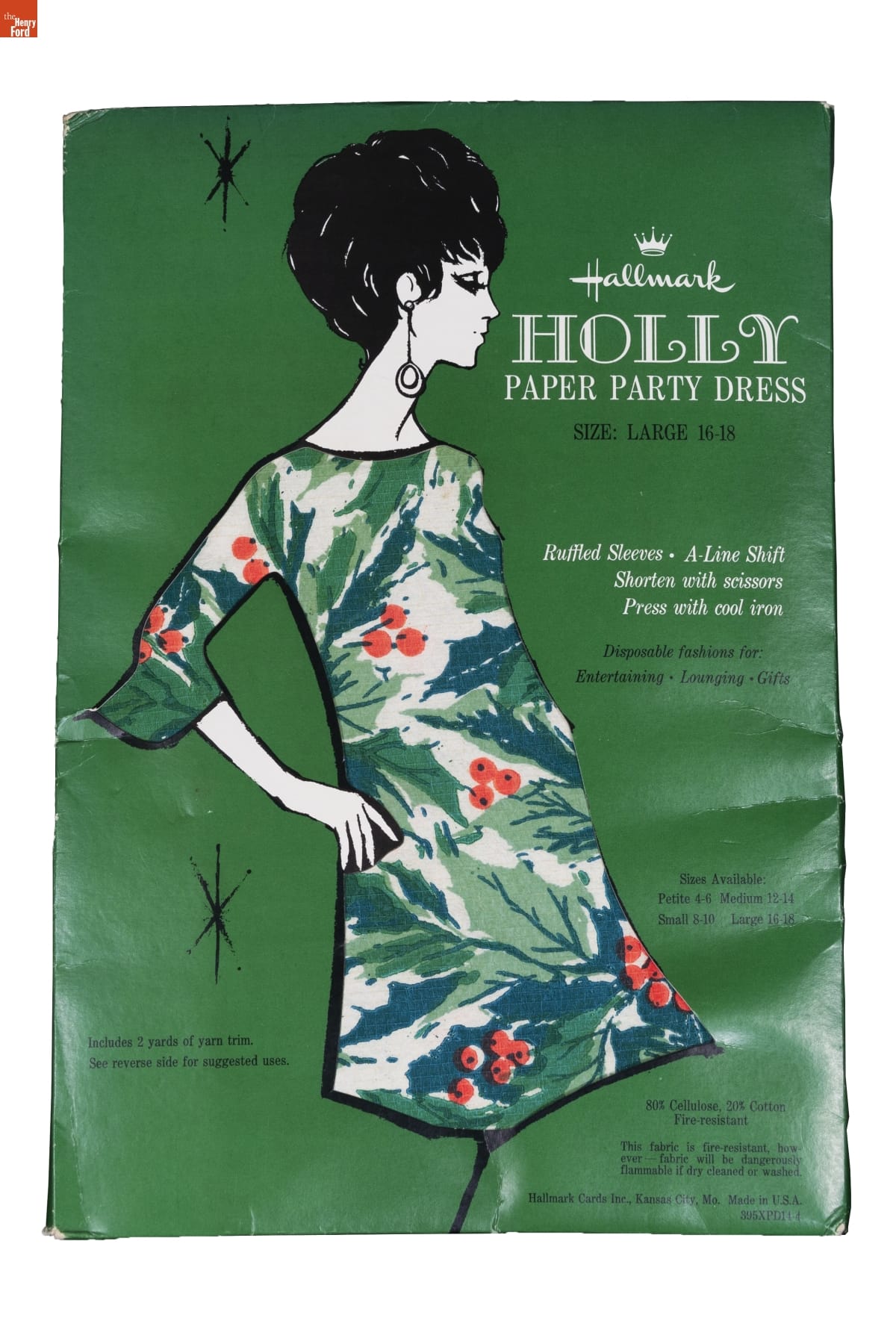 In the spring of 1967, the Hallmark company embraced the disposable clothing trend, marketing a complete party kit that included a printed A-line shift and matching cups, plates, placemats, napkins, and invitations. While matched sets of disposable tableware had been around for decades, a matching paper dress was a new idea.

In this era of informal entertaining, festive paper tableware (and paper fashion) made hosting parties more convenient and cleanup easier. After guests left, the hostess could simply toss everything into the trash--rather than into the dishwasher and washing machine. 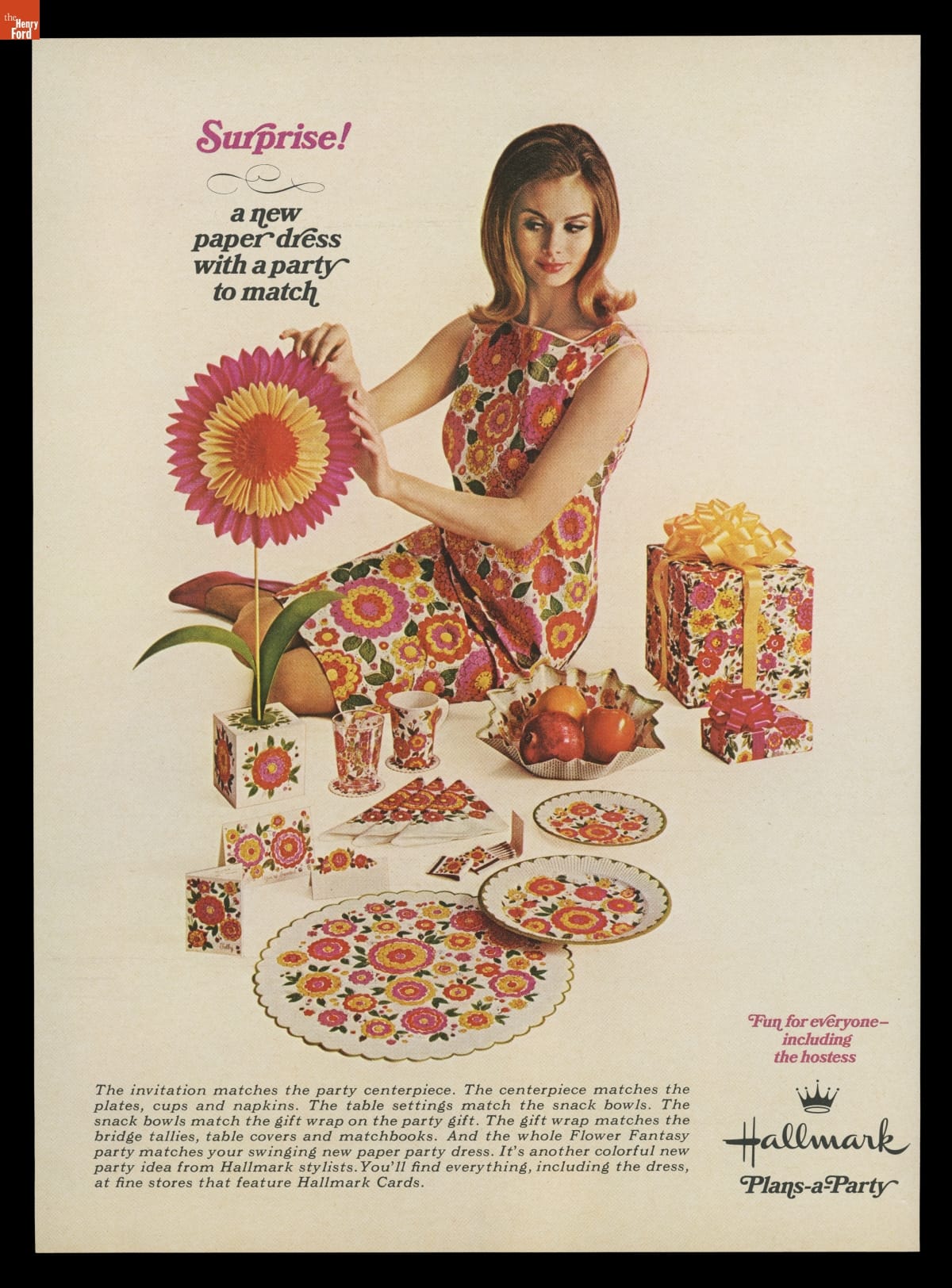 With Hallmark products, a hostess could have every element of her party perfectly matched--including her “swinging new paper party dress,” 1967. / THF146021