Pumpkins and Other Cultivars of Genus Cucurbita

All pumpkins are plants classified within one of five domesticated species of squash (genus Cucurbita). All are native to the Americas. Indigenous people domesticated them and improved them over generations by saving seeds and tending the next crop. Great variety exists because of this long and ongoing process. The histories of heritage varieties within genus Cucurbita acknowledge this legacy.

The following items within The Henry Ford’s collections add some complexity to the great pumpkin story. 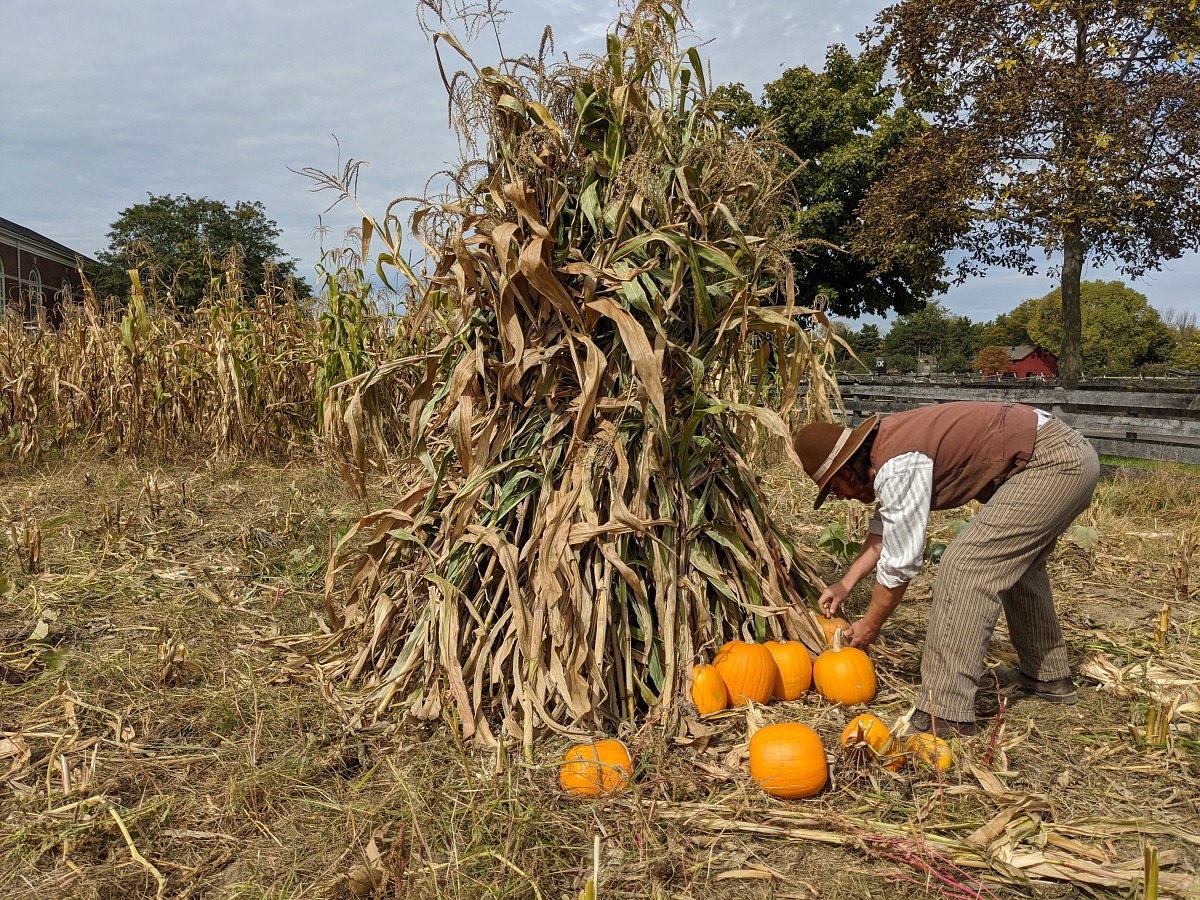 Corn and Pumpkins at Firestone Farm, October 2, 2021 / Photo by Debra A. Reid

Connections Between Pumpkins (Squash) and Corn

Today, the story of the “three sisters”—corn, squash, and beans—reminds us of the indigenous origins of these three staple crops. The rest of the story acknowledges the ways that colonization destroyed indigenous cultures, and the ways that Euro-American agriculture co-opted selective agricultural practices over time. Great variation exists across regions and time. From this vantage point, the cultivation of pumpkins with corn represents a strategy adopted by Euro-Americans, especially in the northeastern and midwestern United States. Their goal focused on feeding themselves and their livestock.

The degree to which farm families grew pumpkins changed over time and differed depending on region of the country. A correspondent to the Michigan Farmer and Western Agriculturalist argued that “the practice of planting pumpkins in the same hill as corn, is not the best. What is gained in the pumpkin is lost in the corn. Where there is a thrifty pumpkin vine, there will be meagre ears of corn” [Eli Wooden, Pulaski, Michigan, May 8, 1843, published in Vol. 1, No. 7 (May 15, 1843), page 49]. 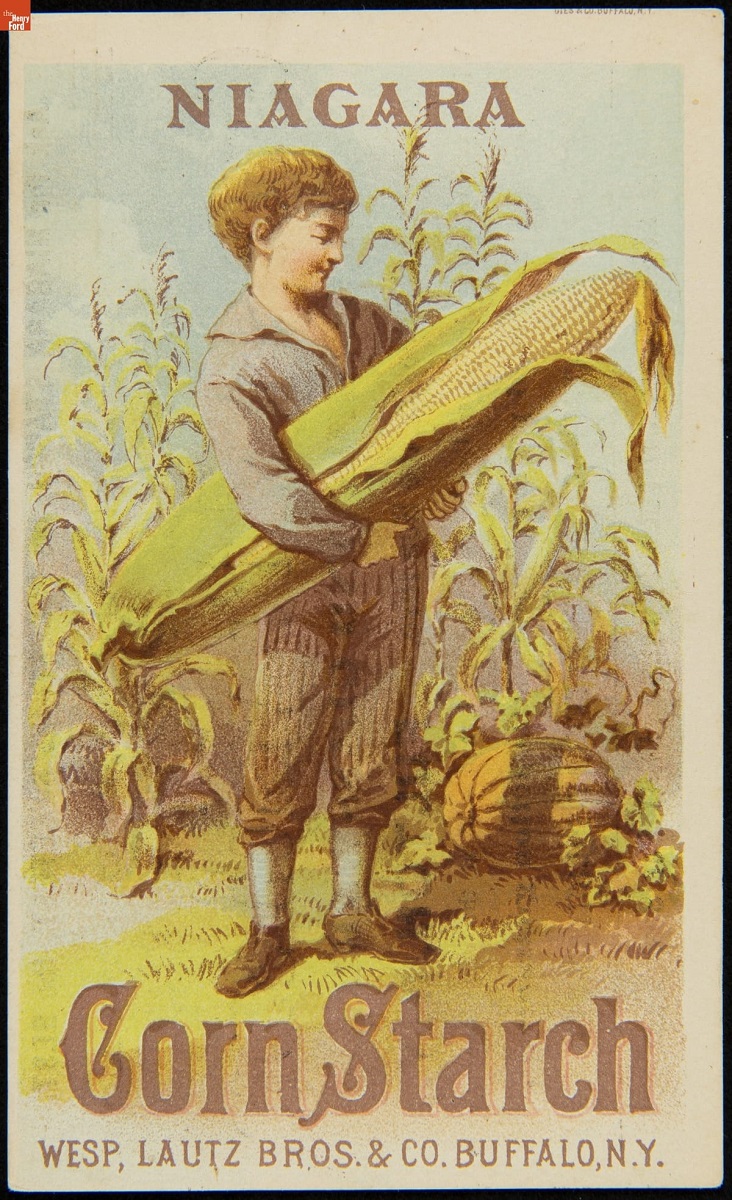 Others advocated intercropping. Promotional material for the Triumph hand-operated corn planter urged farmers to purchase a pumpkin seed attachment so they could plant their pumpkins at the same time they planted their corn. “It takes no extra time or labor to plant Pumpkin Seeds when you are planting corn with Kent’s Triumph Planter. It takes no extra ground, no extra care.” In fact, as manufacturer A. C. Kent explained, “No farmer can afford to do without one.” The card described a bountiful pumpkin crop as excellent cattle feed. “Cows fed on them will give rich milk and fine flavored yellow butter,” and the material further asserted that cows fed no pumpkin rations would give neither. 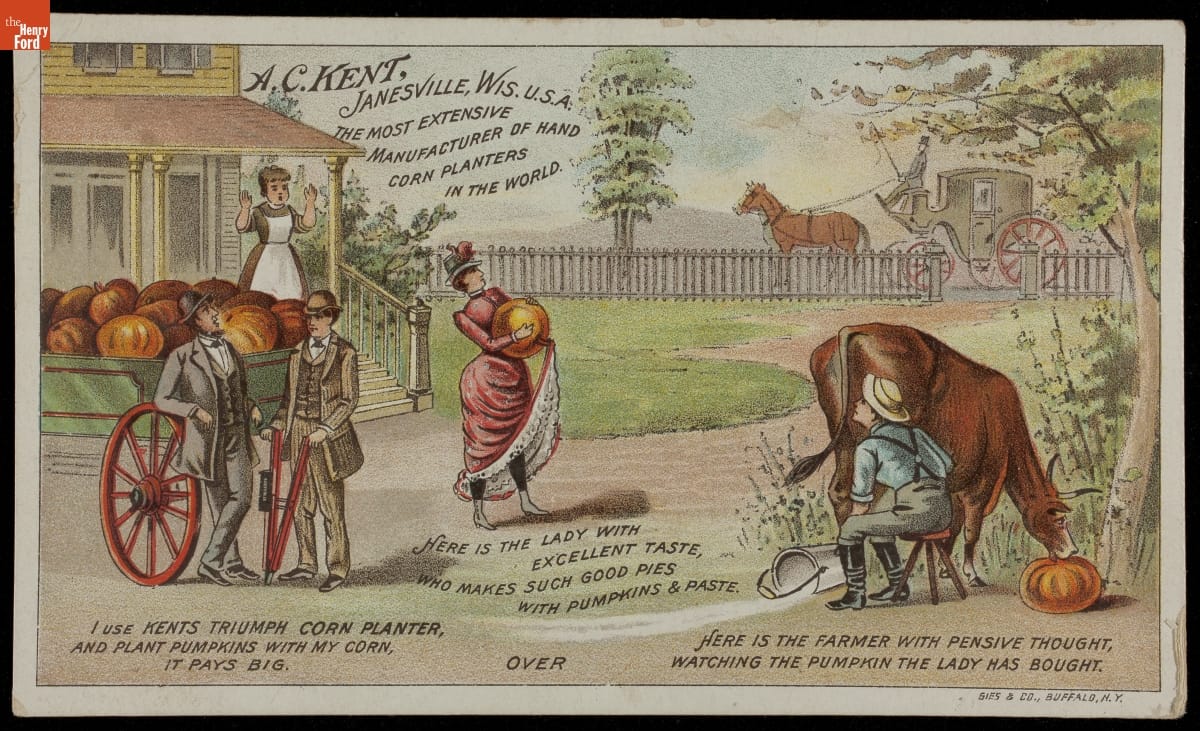 The intercropping of squash and corn served a purpose, but worked best in certain conditions. Corn and squash both need nitrogen, which beans (a legume) help the soil retain. Removing beans from the equation leaves two nitrogen-hungry crops competing for limited quantities in the same soil. Squash and corn plants both need large quantities of phosphorus, too, and squash vines also need potassium to thrive. 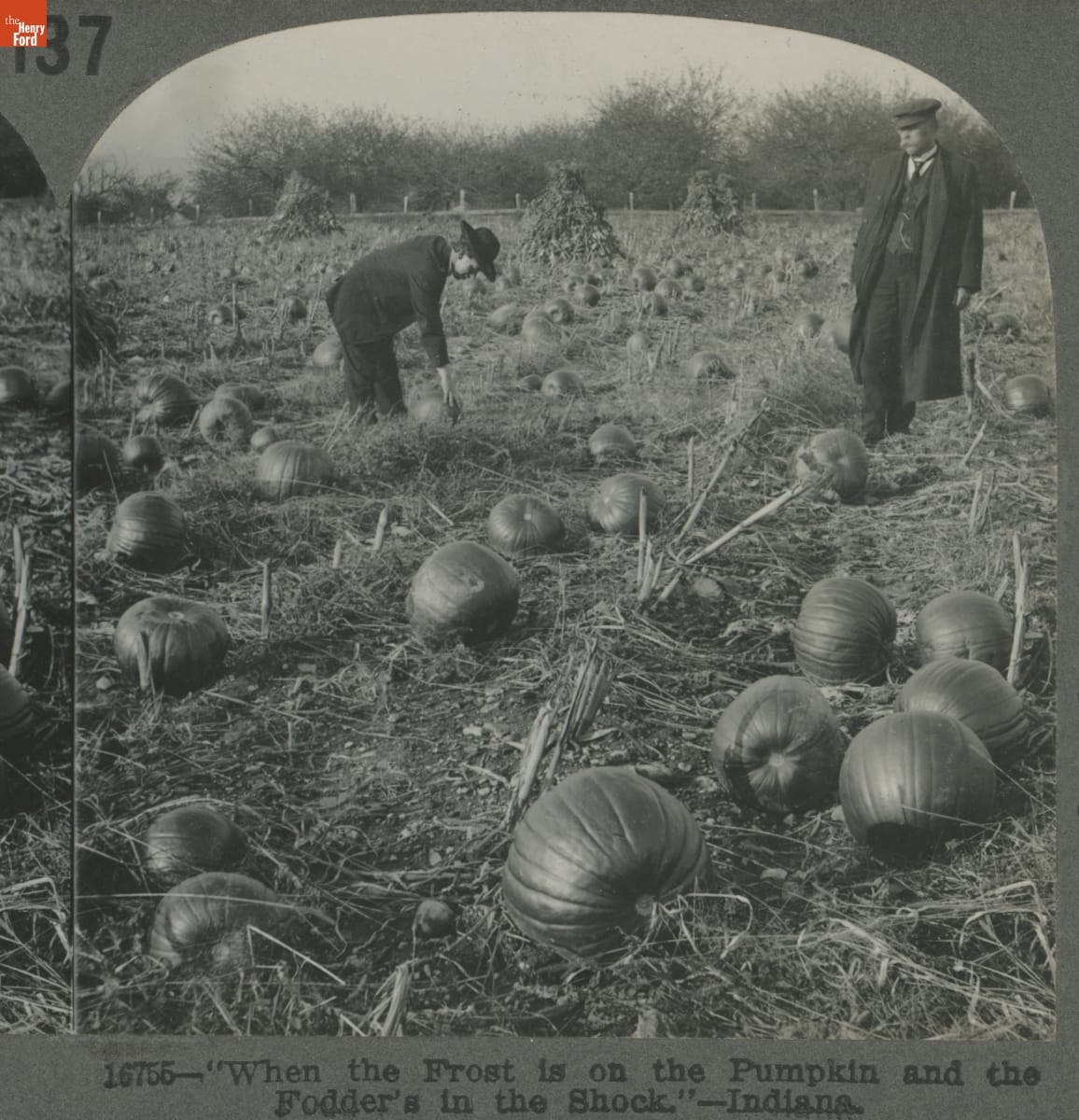 Farmers already practicing intensive animal husbandry could manure their intercropped fields with composted organic manure—preferably pig, chicken, or sheep manure with higher concentrations of nitrogen and other nutrients. This enriched the soil with the nutrients needed to yield a field of pumpkins and corn, as the detail above from a Keystone stereograph, “Farming Pumpkins in Indiana,” shows. Farmers that did not practice intensive animal husbandry needed to plan for decreased yields if they persisted in intercropping corn and squash. Mechanizing the corn harvest, a process that started in earnest during the 1920s, eliminated the tradition of planting squash in corn fields.

Agricultural science factored heavily into farmer decisions, but romantic notions of the pumpkin-corn relationship persisted largely because of associations expressed through poetry and adopted as part of regional popular culture.

Massachusetts abolitionist and poet John Greenleaf Whittier (1807–1892) waxed eloquent about the pumpkin in the context of corn fields and harvest rituals in “The Pumpkin,” likely written in 1844, and published in Poems by John G. Whittier (1849).

When wild, ugly faces we carved in its skin,

Glaring out through the dark with a candle within!

When we laughed round the corn-heap, with hearts all in tune

Our chair a broad pumpkin – our lantern the moon…

Indiana poet James Whitcomb Riley (1853–1916) further popularized the connections between pumpkins and corn fields with his poem, “When the Frost is on the Pun’kin,” published in 1888. Riley cast the rituals involved with fall harvest—“the gathering time,” as he called it—as fulfilling and regenerative practices. All occurred within the context of corn shocks with pumpkins stacked at their base, likely positioned there for a few days for the rind to “harden” prior to transport either to a storage bin or to market. An educational stereograph emphasized these connections by featuring verses from both Whittier’s and Riley’s poems. 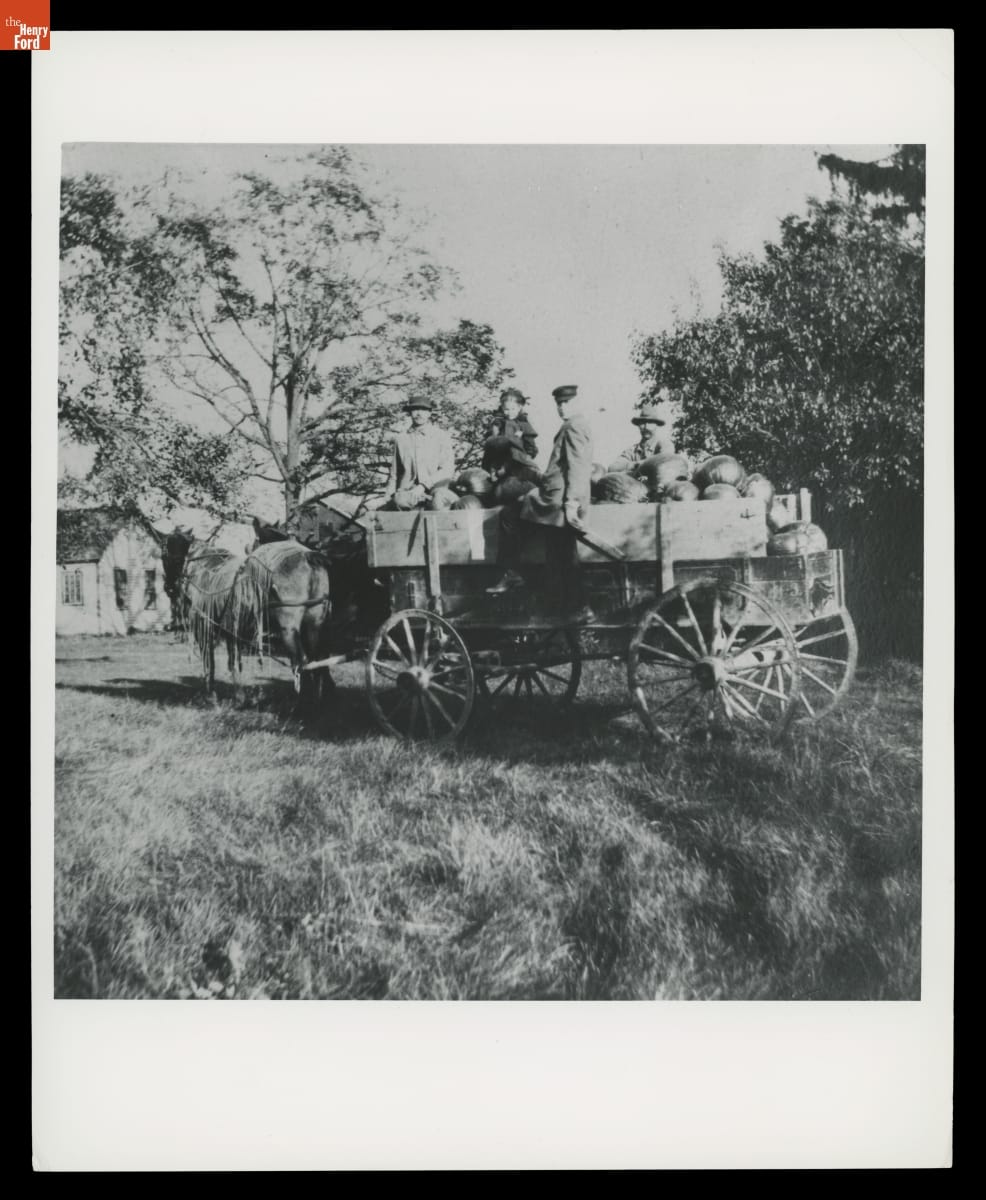 The harvest really started the process of marketing the golden pumpkin. Processing pumpkin and squash is time-consuming. During the late-nineteenth century, canning technology created new commercial opportunities for farmers who contracted with canning companies to raise field pumpkins. The canners packed pumpkin and squash pulp into cans and decorated them with colorful labels that indicated the contents: “golden pumpkin.” An illustrated children’s book, The Pearl and the Pumpkin (c. 1904), featured a canner seeking choice pumpkins whose quest was disrupted by carving pumpkins for Hallowe’en.

Almost all summer squash fall within the Cucurbita pepo or C. pepo variety. Humans consider them most edible when immature—that is, before their rind hardens and seeds form. But mature summer squash can be stored for short periods of time and can be used for livestock feed. The Connecticut field pumpkin, the go-to for many canning companies, is also C. pepo.

The crookneck squash, a native of the eastern United States, makes an appearance in John Greenleaf Whittier’s ode, “The Pumpkin.” The crookneck grows on bush-type vines, yields edible fruit within 43 days of planting, and has either a warty or a smooth rind that protects a firm interior noted for its buttery and sweet flavor. 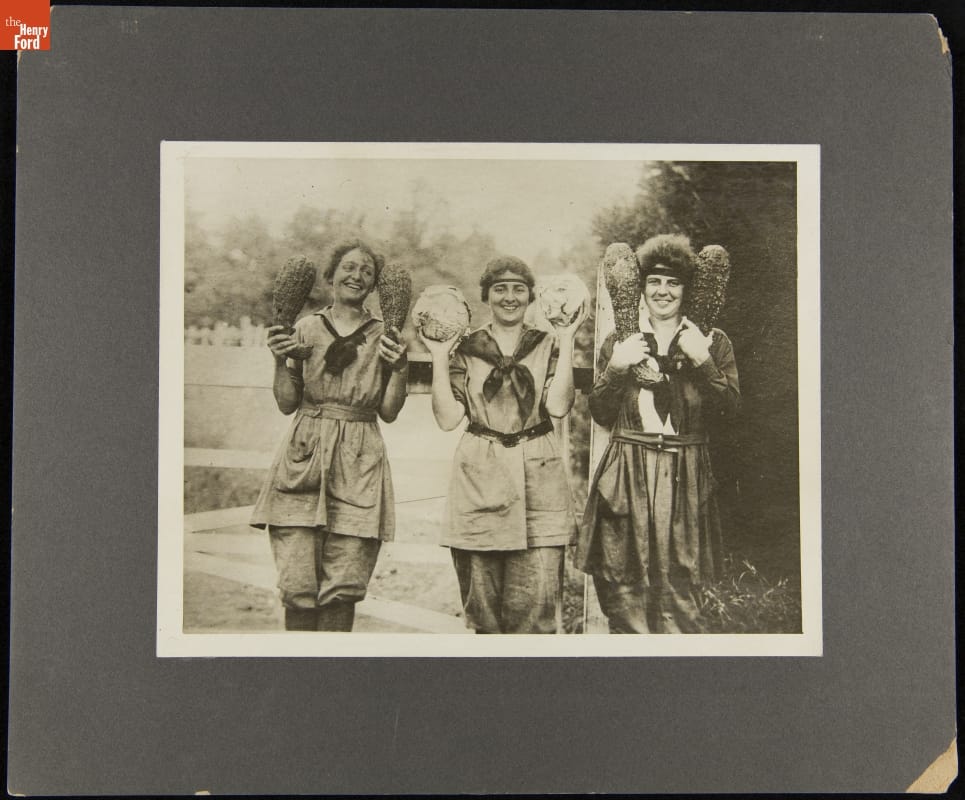 Two Members of the Woman's National Farm and Garden Association Feature Crookneck Squash while the Woman in the Middle Displays Two Cabbages, 1918 / THF288950

The pattypan squash, also known by many other names (including scallop squash), grows on bush-type vines, starts to yield about 50 days after planting, and produces squash for weeks. Gardeners hauled these attractive squash to market, as seen in the left foreground of this photograph of street vendors at Richmond, Virginia’s Sixth Street Market. The squash, along with watermelon, other melons, and sweet corn, affirmed the bounty of summer. 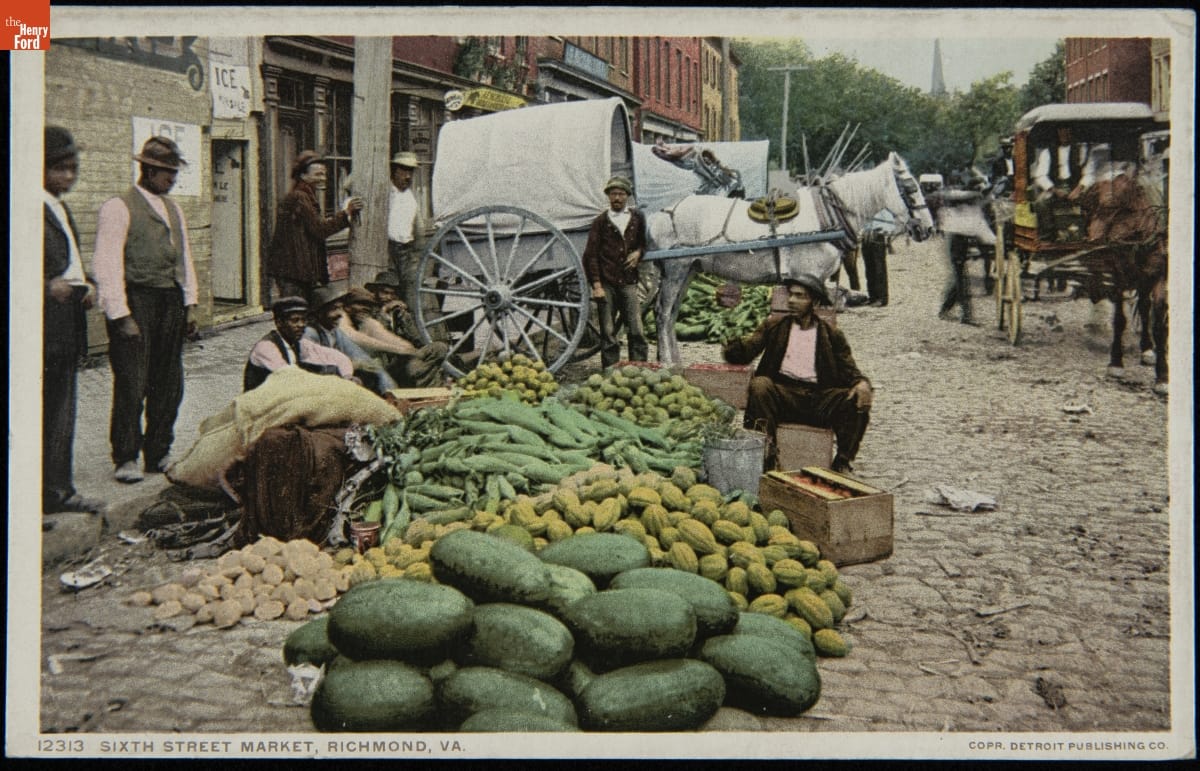 Winter squash species of Cucurbita are meant to be harvested only when fully mature. The largest of these species, C. maxima, includes one of the most marketable of all squash, the Boston Marrow. It takes approximately 105 days to mature and weighs around 15 pounds on average. 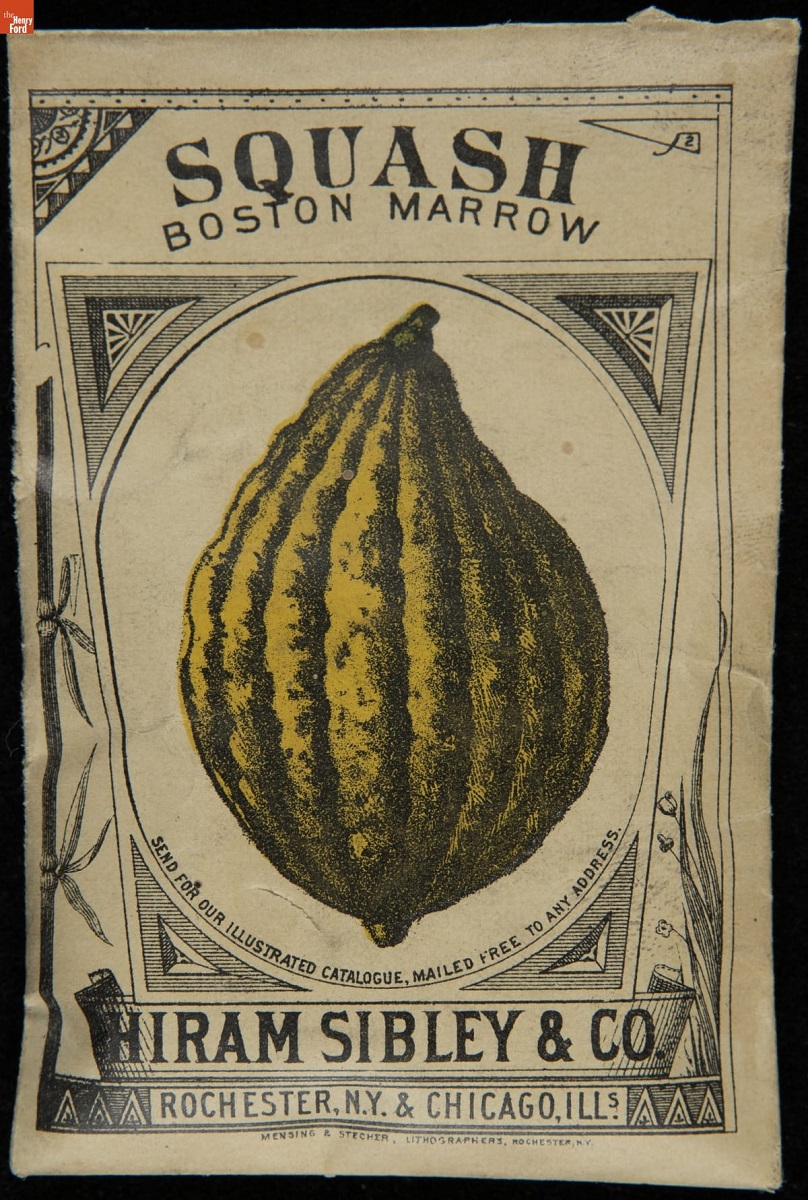 Seed companies described the Boston Marrow as having “excellent flavor” (from a Hiram Sibley Co. seed packet) and being unsurpassed in sweetness (from the D.M. Ferry & Co. 1882 catalog, page 56). The flavor, much celebrated, got the attention of canning companies from coast to coast. Olney & Floyd, located near markets swayed by the Boston Marrow’s reputation, featured the squash on its label. Across the country, the California-based Del Monte brand included a prototypical Boston Marrow on its “Squash” label, but the generic name implied the inclusion of other pie-worthy squash.

The Hubbard squash, another C. maxima, gained market share during the late-nineteenth century. Seed purveyors, including Detroit seed company D. M. Ferry, described it as “the best winter squash known … sweet and rich flavored” and “as good baked as the sweet potato” (page 56). A polychrome print in D. M. Ferry’s 1882 seed catalogue included a dark-green Hubbard among the “12 best varieties of Vegetables.” The illustration did not do justice to the squash, however, which averaged around 15 pounds, but could top scales at 50 pounds. 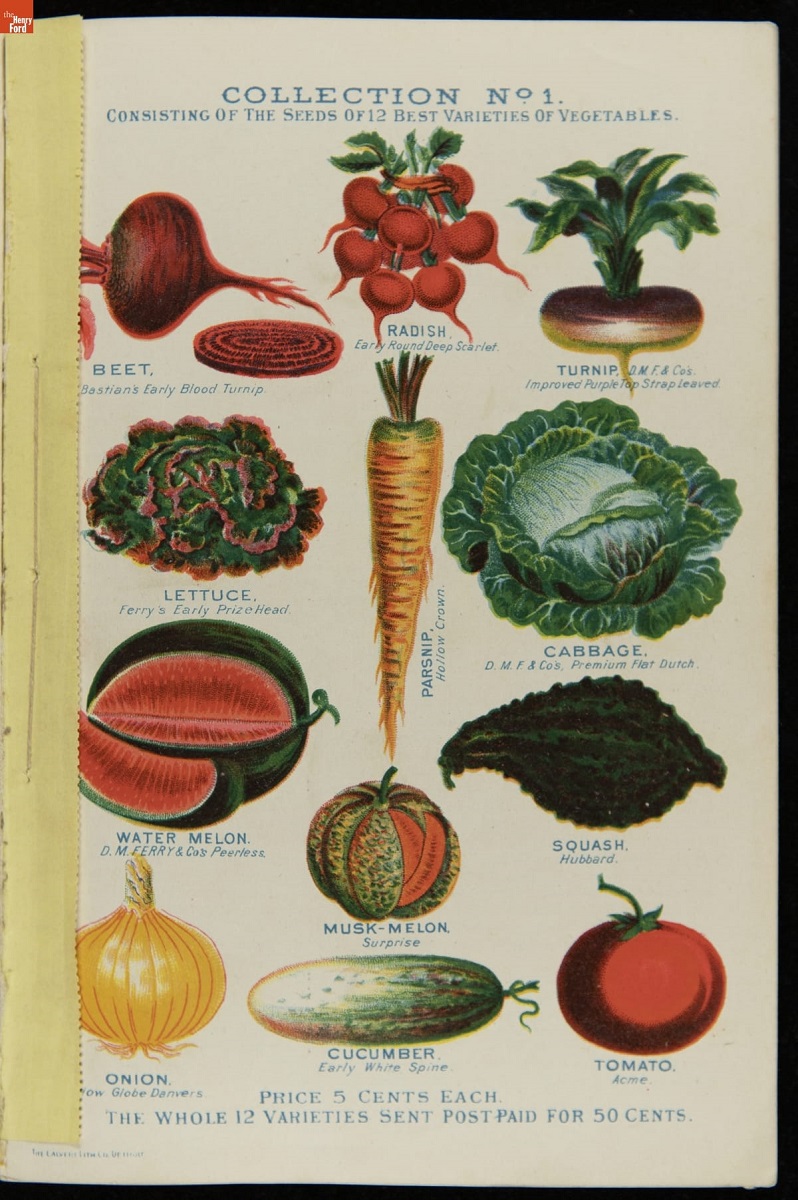 Winter squash could survive months in storage. Research by horticulturalists hoped to extend that life to take advantage of higher market prices during late-winter months. William Stuart of the Vermont Experiment Station in Burlington recorded changes in weight and moisture levels for one ton of Hubbard squash to document best storage practices. He explained that farmers could minimize loss by harvesting the squash only when they were fully matured. He advised farmers to cut the fruit from the vine, leaving the stem attached, and to “harden” the fruit for two to three days in the field before moving them to storage bins. Farmers needed to handle their harvest “as one would handle eggs” because breaking stems or bruising them would hasten decay. Such care could return $50 per ton at market during February and March, compared to $15 to $20 per ton during the fall harvest season (“Storage of Hubbard Squash,” Farmers’ Bulletin 342: Experiment Station Work XLIX (1908), pages 18–19).

How Big Does Your C. maxima Grow? 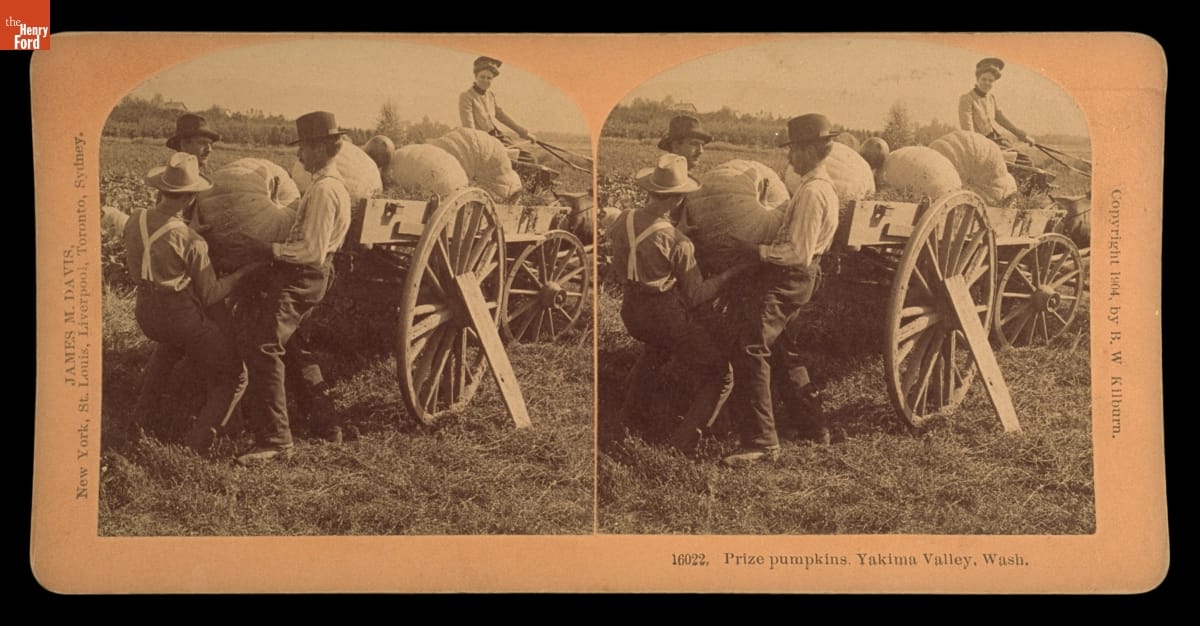 Agricultural publications often celebrated exceptionally large squash. The Michigan Farmer noted “A MAMMOTH squash” weighing 126 pounds was displayed at the Horticultural Exhibition in New Haven, Connecticut [Vol. 1, no. 17 (October 16, 1843), pg. 133]. Might the MAMMOTH squash have been a Mammoth Gold or other member of C. maxima? Was Charlie Brown’s great pumpkin a Mammoth Gold? 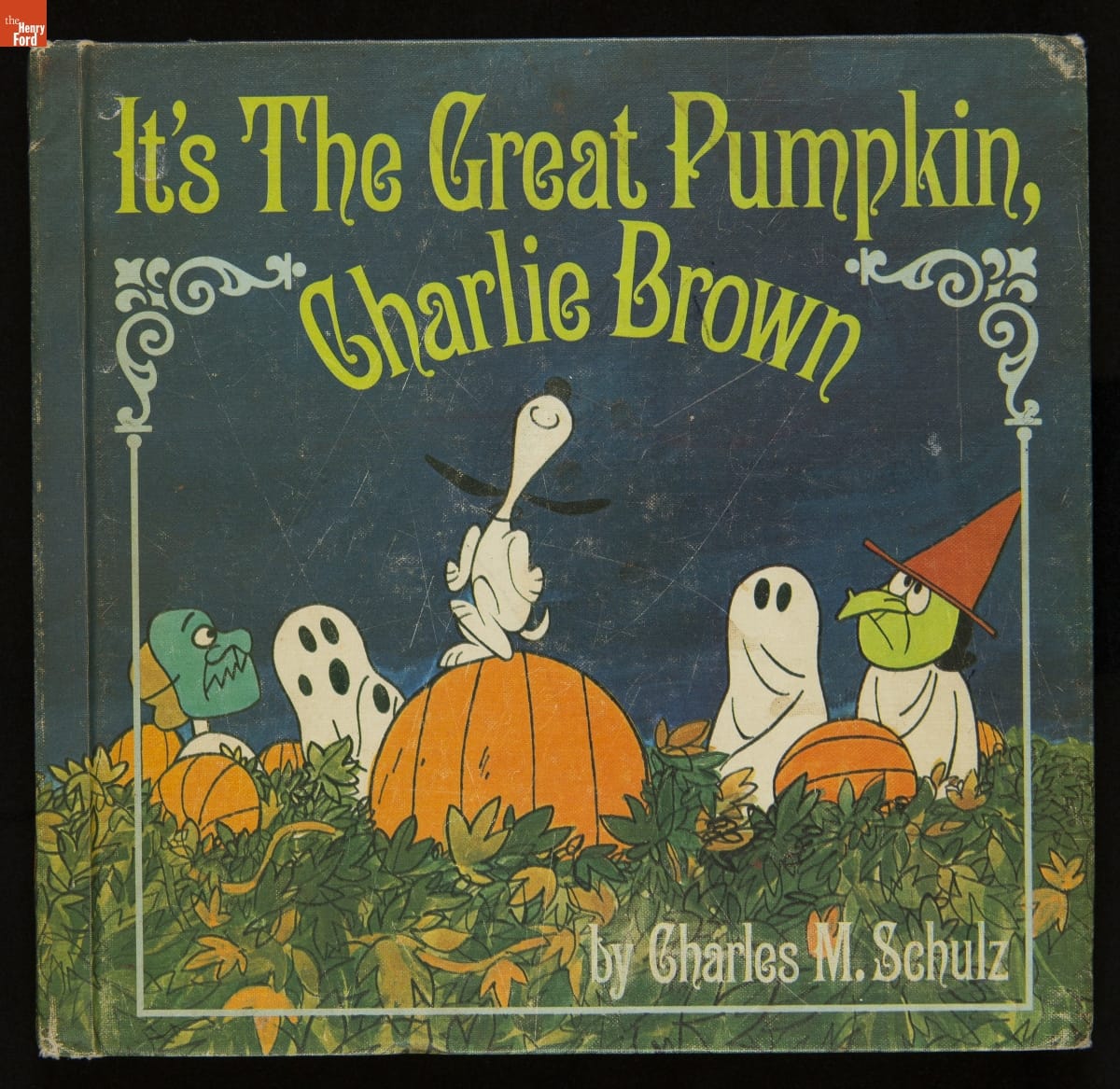 Concerns about the preservation and perpetuation of indigenous squash and other Cucurbita cultivars led to the formation of Native Seeds/SEARCH in 1983. Volunteers collected and preserved endangered traditional seeds from the Southwest. Today the Native Seeds/SEARCH seed bank includes nearly 2,000 crops suited to arid southwestern North America, from Colorado to central Mexico. This area factored prominently in domestication of Cucurbita, and the urgency to understand biodiversity in context has only increased in the decades since its founding.

Today, Native Seeds/SEARCH remains committed to seed preservation and propagation, but also emphasizes the knowledge required to grow them. Adapting crops to ensure sustainable ecosystems and food security into the future now represents the mission of Native Seeds/SEARCH:

The resilience of our food systems depends on agricultural biodiversity, as farmers and plant breeders can draw on the myriad genetic combinations as raw materials to develop new varieties better adapted to an uncertain and changing environment. Climate change, water scarcity, new and more virulent crop pests and diseases—all of these troubling trends currently threatening our food security require a wide pool of genetic diversity to prevent catastrophic crop failure and famine.

Hopefully these variations on Cucurbita inspire you to learn more.

farms and farming, by Debra A. Reid, agriculture