Take a Bus Ride Through the William Luke Collection

Since the dawn of motorized transportation at the turn of the 20th century, buses have been part of America's transportation network. Bus routes have crisscrossed the nation, providing affordable connections to thousands of American cities and small towns. Buses have carried workers to their places of employment, shoppers to downtown stores or suburban malls, and children to school. They’ve shuttled people from the airport to the rental car agency or parking lot. And leisure travelers have boarded buses to explore the wonders of nature or enjoy the adventures offered in urban environments.

In 2009, The Henry Ford acquired the unique collection of internationally-renowned author and photographer Bill Luke, for whom buses were a personal passion as well as a career.

Bill Luke became a devotee of buses and bus travel at a very early age. He was born in Duluth, Minnesota, an area noted for several early bus companies, including Greyhound and National City Lines. As a kid, Luke became fascinated with the history and activities of these major lines. He started collecting bus memorabilia and then began a career in the bus industry, working for the Jefferson Transportation Company in Minneapolis and, later, for the Empire Lines in Spokane. Until 1996, Luke also published a well-known bus and motor coach trade publication, Bus Ride, which covered the people, products, and services in this ever-evolving industry.

Luke's collection is filled with photographs, periodicals, and ephemeral material such as uniform patches, tickets, company publications, timetables, and route maps for bus lines operating throughout the United States. “Hop aboard” and explore some selections from the William Luke Bus Collection (all items gifts of William Luke): 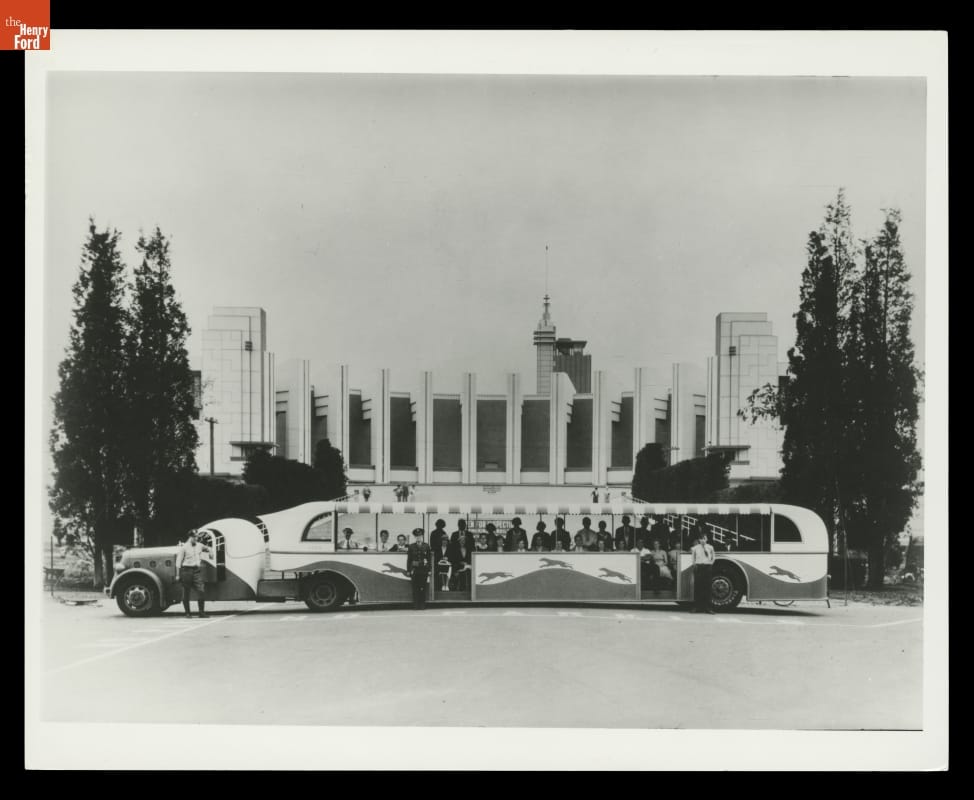 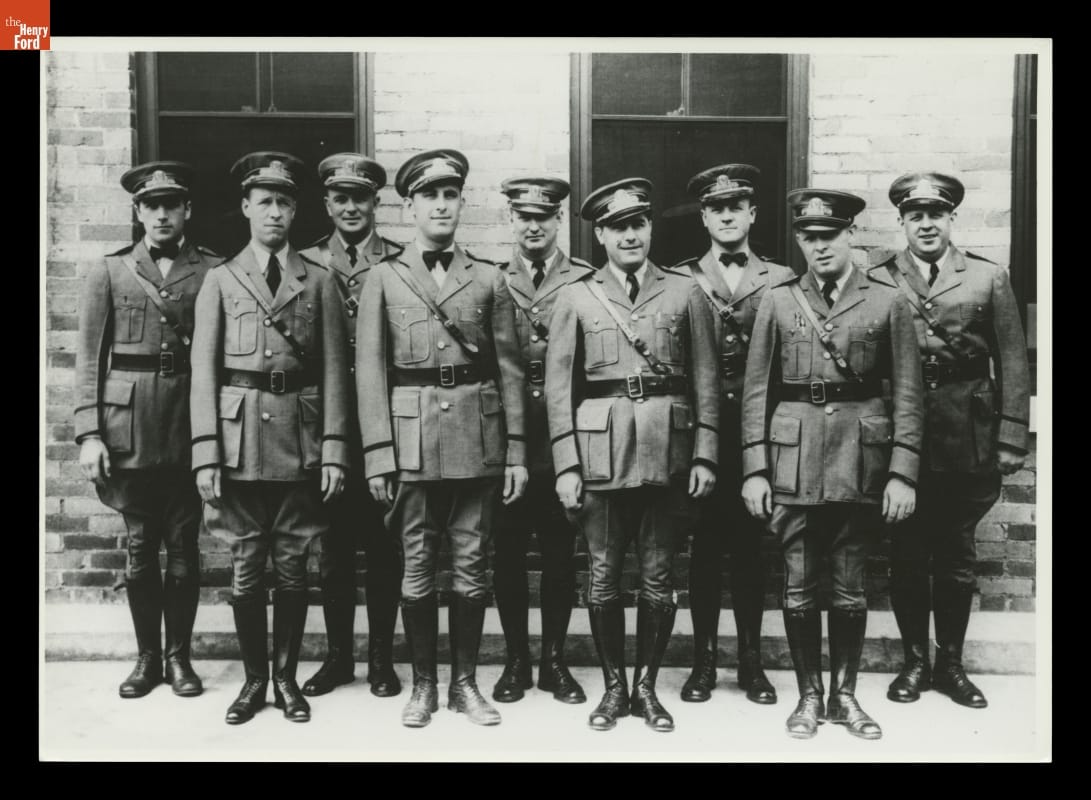 In this late-1920s photograph, Greyhound bus drivers pose in new uniforms. Uniform jackets, pants, caps and boots gave drivers a professional appearance, implying that -- with these experts at the wheel -- Greyhound riders would enjoy a safe and comfortable trip. THF108451 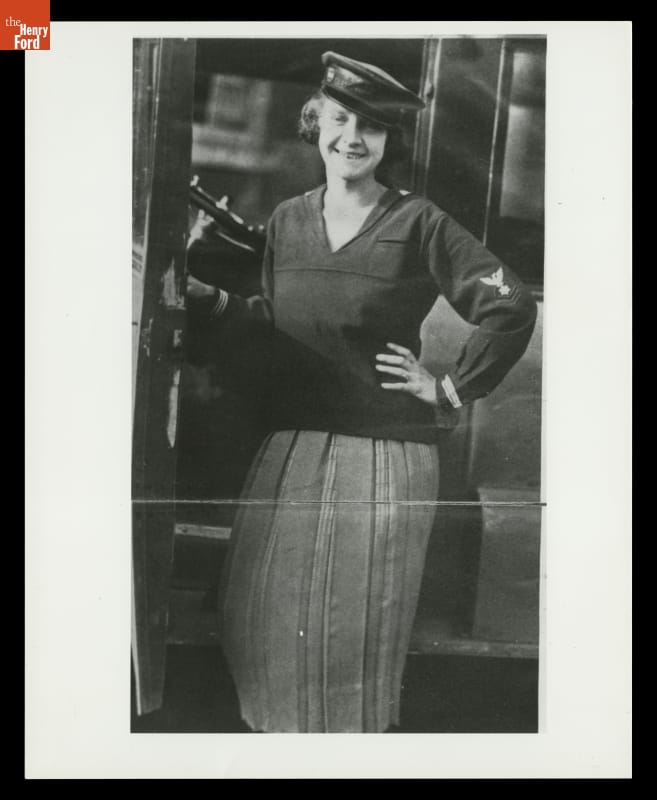 Helen M. Schultz started the Red Ball Transportation Company in 1922. Her bus route ran from Waterloo to Des Moines, Iowa. Schultz met many challenges while establishing her business, including competition from rival bus lines and the railroad, government regulations, and poor highway conditions. She sold Red Ball to the Jefferson Highway Transportation Company in 1930. THF108453 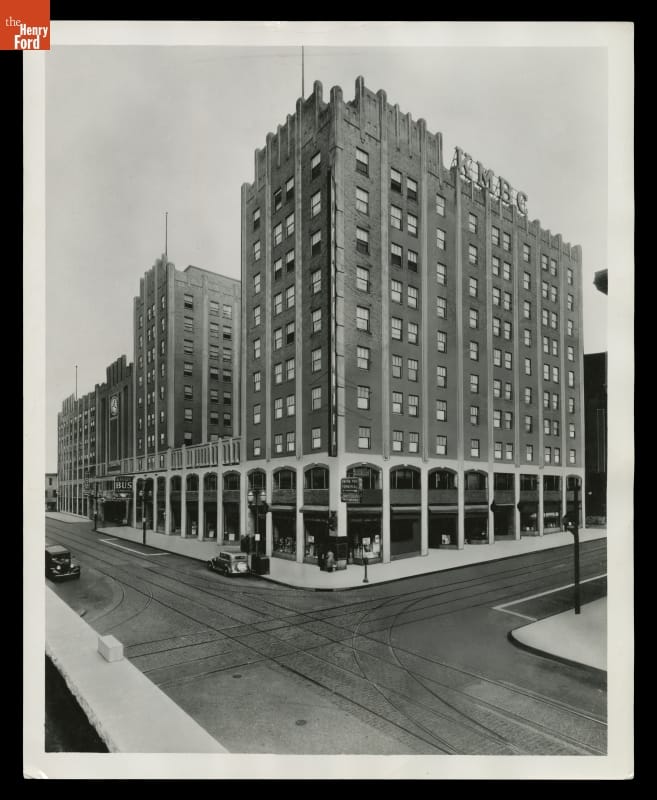 Bus terminals of the 1920s and 1930s were often located in hotels. The Pickwick organization, which owned the Pickwick bus line, commonly built terminals adjacent to or inside its hotels, like this one in Kansas City. The bus terminal located on the first floor featured a turntable that rotated buses 180 degrees within a narrow space -- allowing buses to exit the same way they entered. THF108455 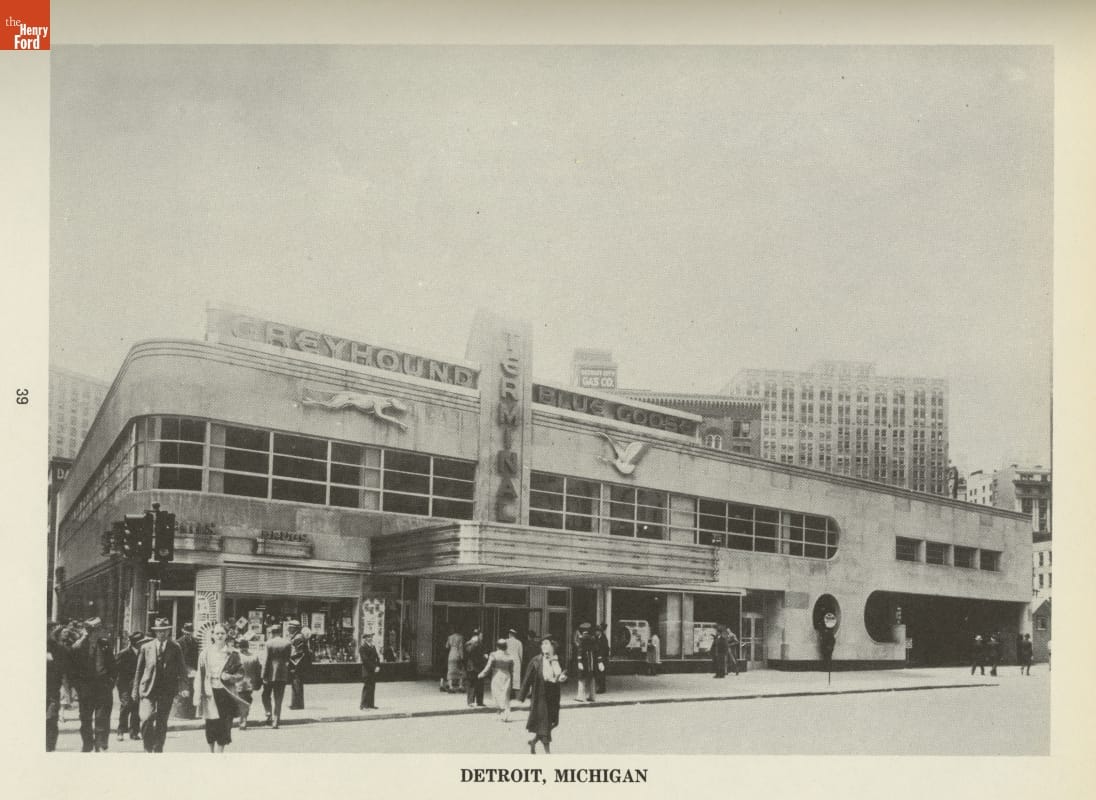 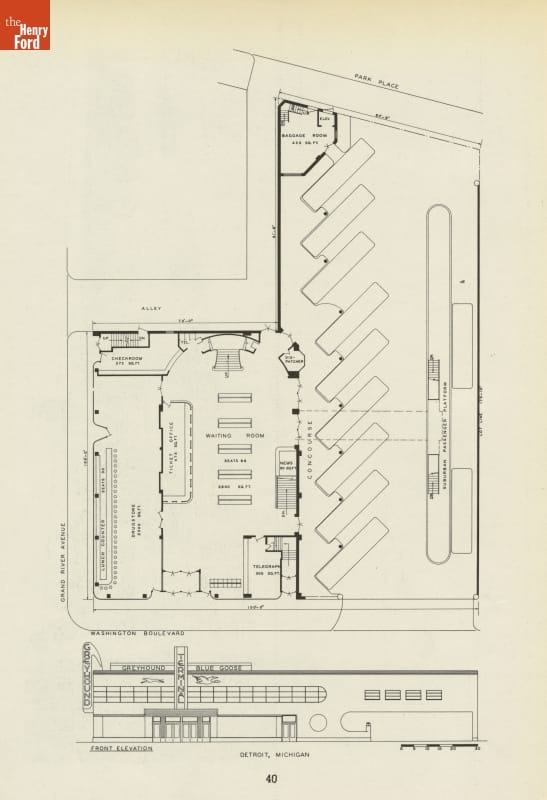 Bus stations were often attractive as well as practical. Many terminals of the 1930s and 1940s sported streamlined facades -- the height of modernity during this time. These images of a Detroit terminal appeared in the 1941 book "Modern Bus Terminals and Post Houses," which featured photographs and floor plans of 45 recently-built bus stations. THF108459 and THF108460 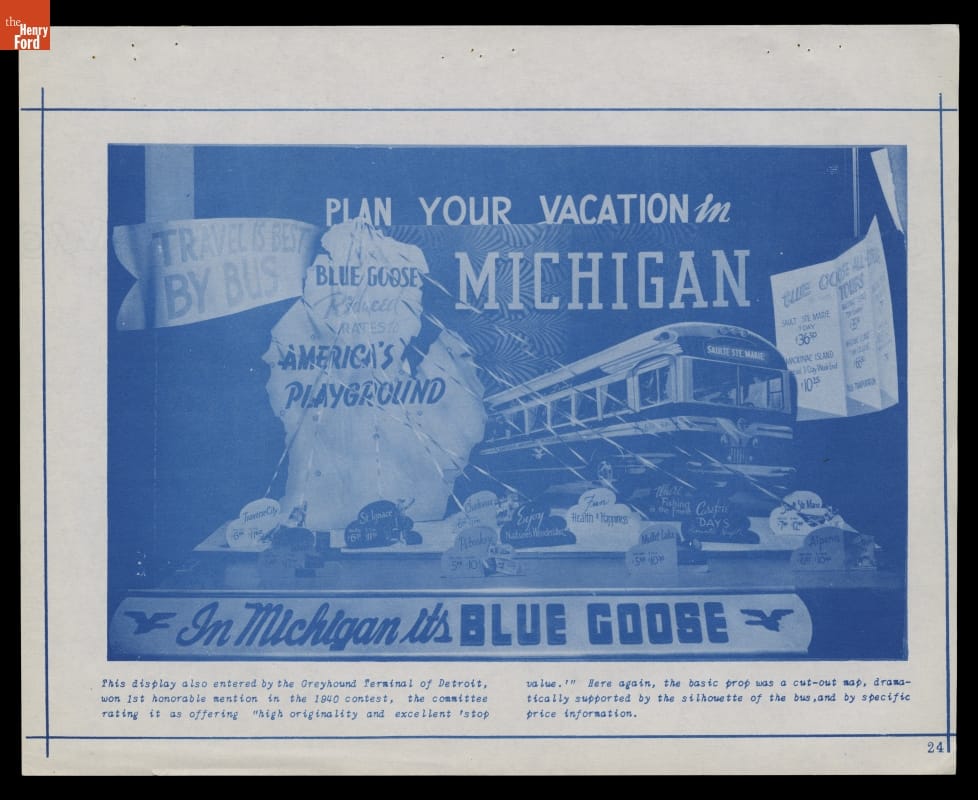 Bus Transportation magazine sponsored a yearly contest for bus terminal window displays promoting the industry. This entry, a 1940 winner, enticed viewers to dream of a Michigan vacation enjoyed while traveling on the Blue Goose line. The judging staff called it "a highly original design with 'stop and look' appeal." THF108462 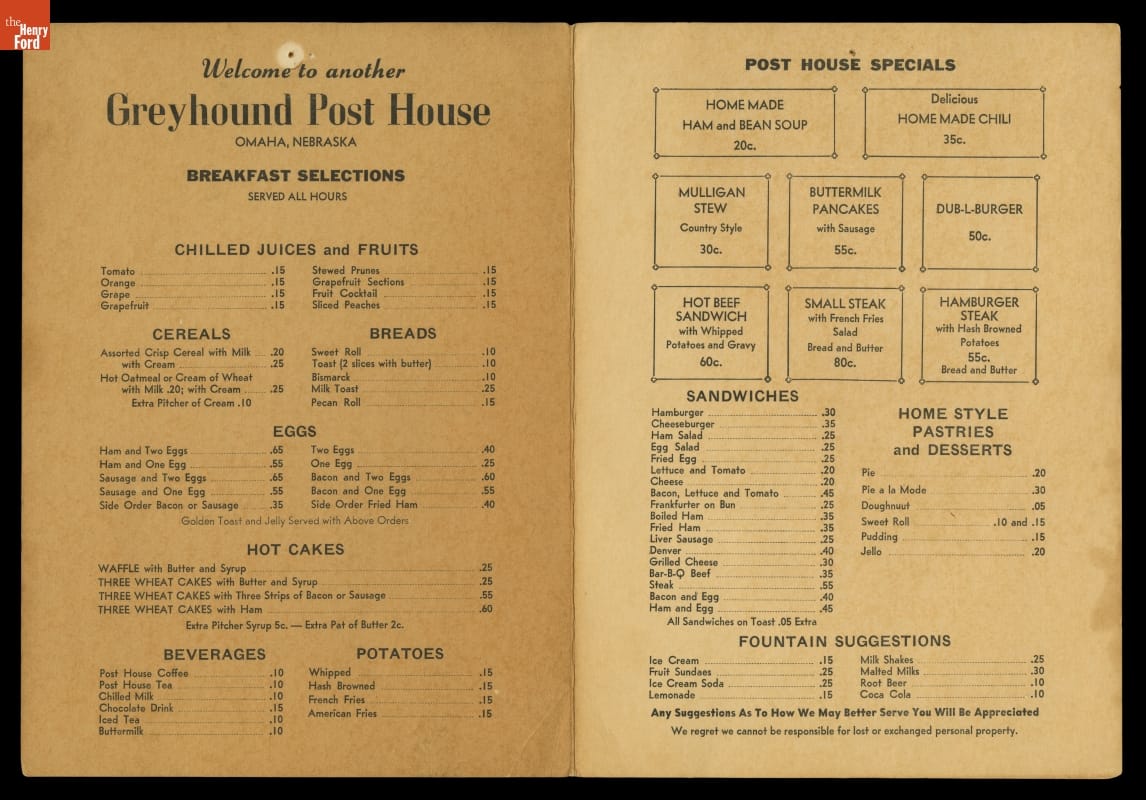 Many long-distance bus companies operated special restaurants to service their travelers. This 1955 menu explains that Greyhound established its Post House restaurants -- named after stops along stagecoach routes where travelers could rest, eat, and possibly even secure lodgings -- to guarantee quality food and sanitary conditions. THF108464 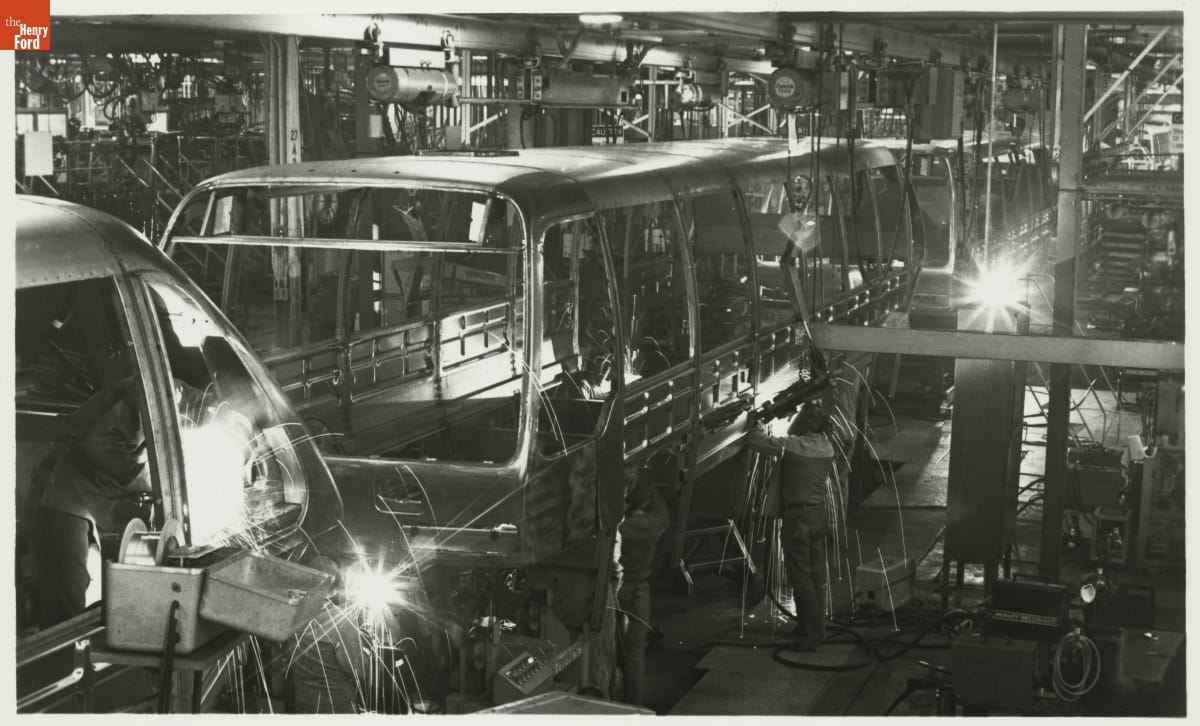 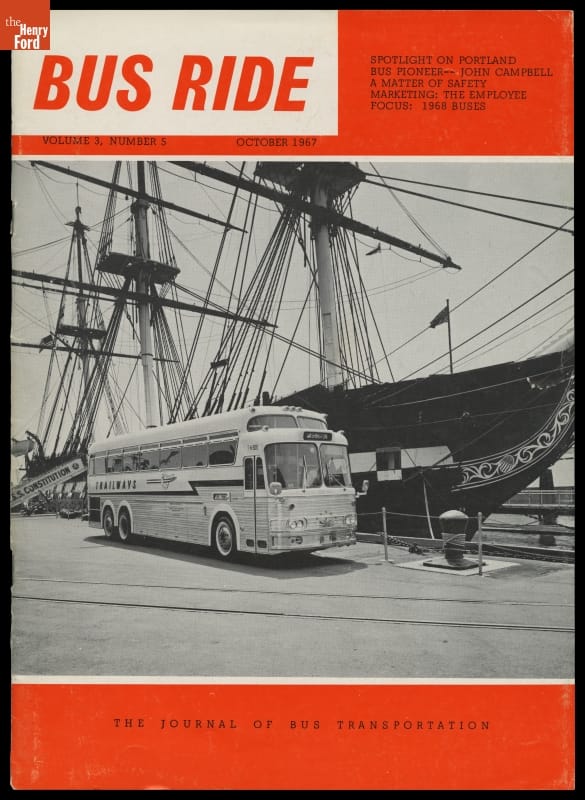 Bus Ride magazine kept readers apprised of developments in the bus industry, including new technologies, changing regulations, and the evolving travel market. The William Luke Bus Collection includes a complete run of Bus Ride from 1967 to 2012, providing a glimpse into decades of opportunities and challenges in the bus industry and historical information about individual bus lines. THF108470

For more information about the William Luke Bus Collection, please contact The Henry Ford's Benson Ford Research Center. A version of this post originally ran in 2013 as part of our Pic of the Month series