In this country of “magnificent distances,” we are all, more or less, according to the requirements of either business or pleasure, concerned in the use of riding vehicles. 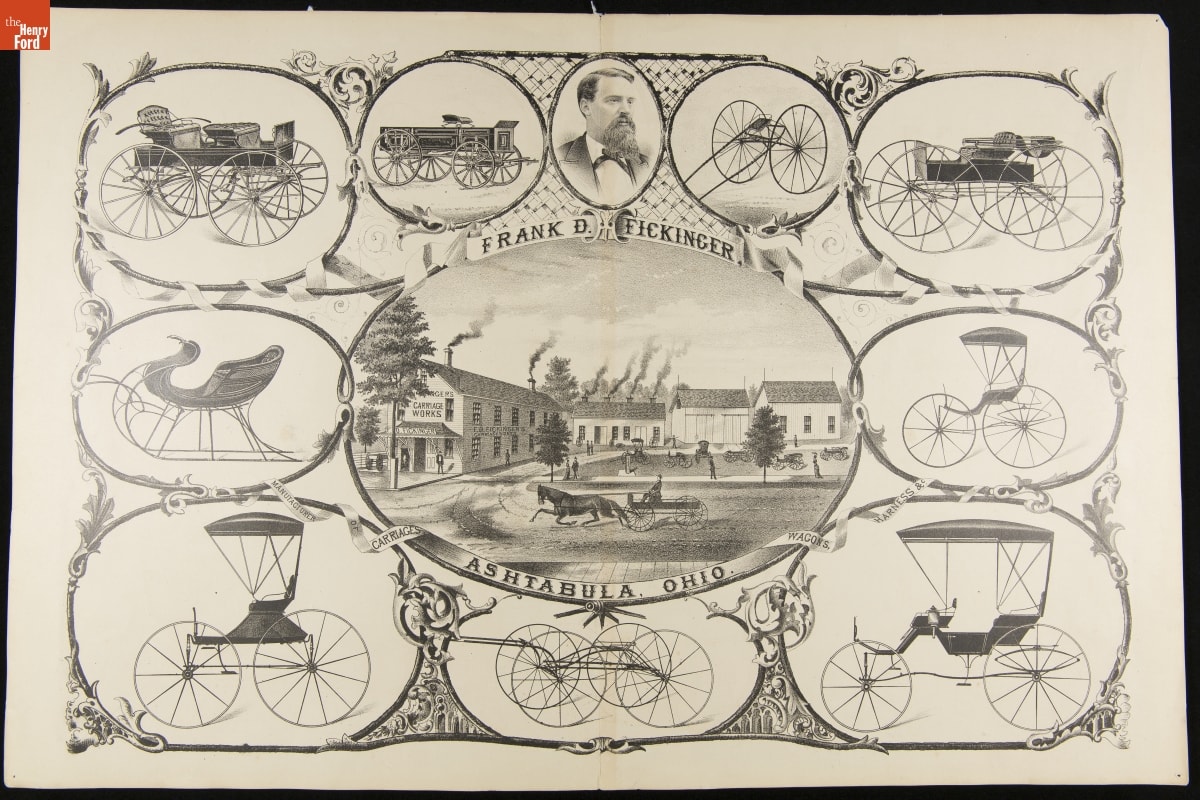 This print, circa 1875, depicts a variety of horse-drawn vehicles available from Frank D. Fickinger, a manufacturer in Ashtabula, Ohio. / THF288907

The period from the late 17th century until the first decades of the 20th century has been called by many transportation historians the “Carriage Era.” In the 17th and 18th centuries, carriages were extremely expensive to own and maintain and consequently were scarce. Because roads were poor and vehicle suspension systems rather primitive, riding in a carriage or wagon was not very comfortable. As the 19th century advanced, industrialization profoundly affected the production, design, and use of horse-drawn vehicles. In the United States, the combination of industrialization and the ingenuity of individual vehicle designers and makers made possible the production of a wide range of vehicles—some based on European styles, but many developed in the United States.

The Horse as a Living Machine

The horse is looked on as a machine, for sentiment pays no dividend. 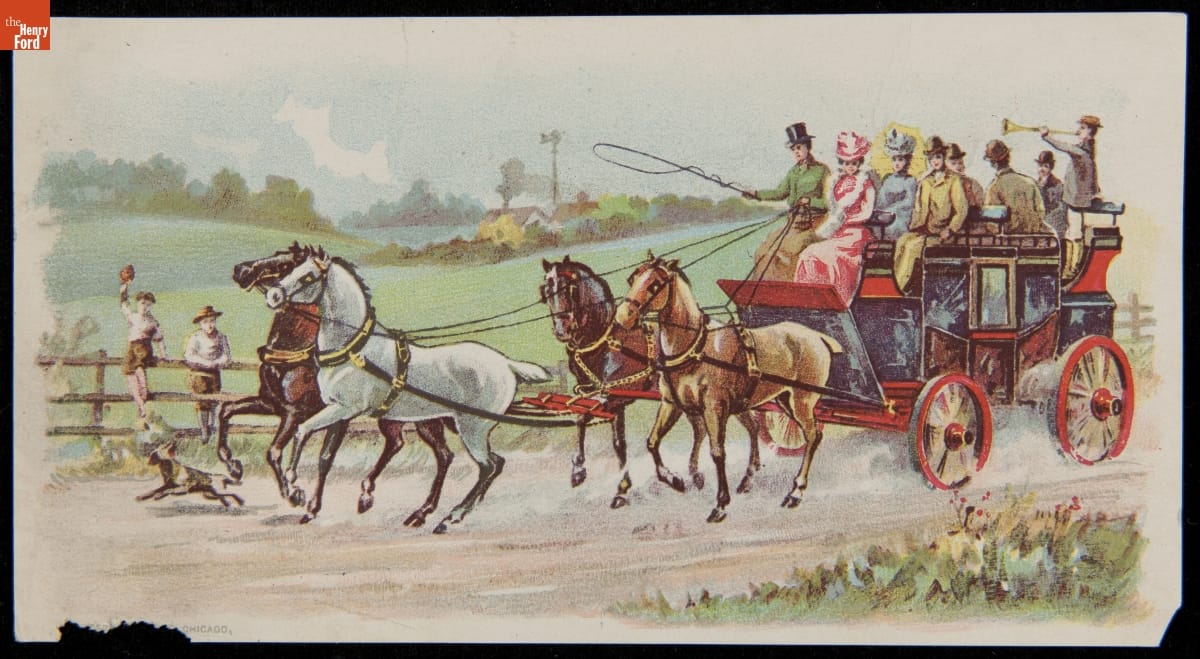 Horses pulling a carriage filled with people start as a dog barks, in this circa 1893 trade card for Eureka Harness Oil and Boston Coach Axle Oil. / THF214647

For most of the Carriage Era, business owners regarded horses primarily as machines whose principal value was in the profits that could be derived from their labor. One pioneer of modern breeding, Robert Bakewell, said that his goal was to find the best animal for turning food into money.

The vehicles themselves really make up only half of the machine. The other half, the half that makes the carriage or wagon useful, is the horse itself. In engineering terms, the horse is the “prime mover.” Thinking of a vehicle and a horse as two parts of the same machine raises many questions, such as:

But despite what horse owners of the Carriage Era thought, horses are not merely machines—they are living, sentient beings. They have minds of their own, they feel pain, they get sick, and they experience fear, excitement, hunger, and fatigue. Today we would blanch at regarding the horse as simply a means of turning food into money.

The Aesthetic Dimension and Uniquely American Traits of Horse-Drawn Vehicles

A carriage is a complex production. From one point of view it is a piece of mechanism, from another a work of art. 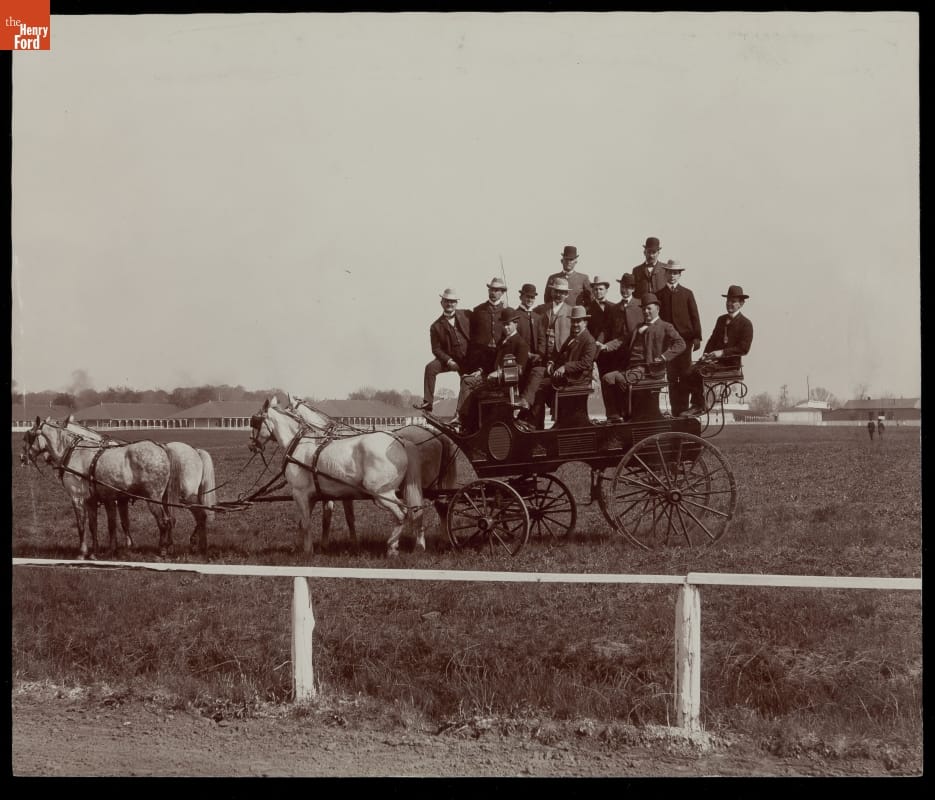 Kentucky governor J. C. W. Beckham is among the party aboard this horse-drawn coach at the 27th running of the Kentucky Derby in Louisville in 1901. / THF203336

Horse-drawn vehicles were created with aesthetic as well as practical objectives. Aesthetics were asserted with the broadest connotation, expressing social position, concepts of beauty, elevation of sensibility, and the more formal attributes of design and details of construction. Horse-drawn vehicles traveled at slow speeds—from 4 to 12 miles per hour. This allowed intense scrutiny, as evidenced by 19th-century sources ranging from etiquette books to newspaper articles. From elegant coaches to colorful commercial vehicles, pedestrians and the equestrian audience alike judged aesthetics, design, and detail. In many respects, carriages were an extension of a person, like their clothes.

During the 19th century, there were many arenas for owners to display their horse-drawn vehicles. New York’s Central Park included roads designed for carriages. Central Park was a work of landscape art, and architects Frederick Law Olmsted and Calvert Vaux saw elegant horse-drawn vehicles as essential, mobile parts of that landscape. Other cities developed similar parks on a smaller scale. But a park was not necessary—any street or road was an opportunity to show off. 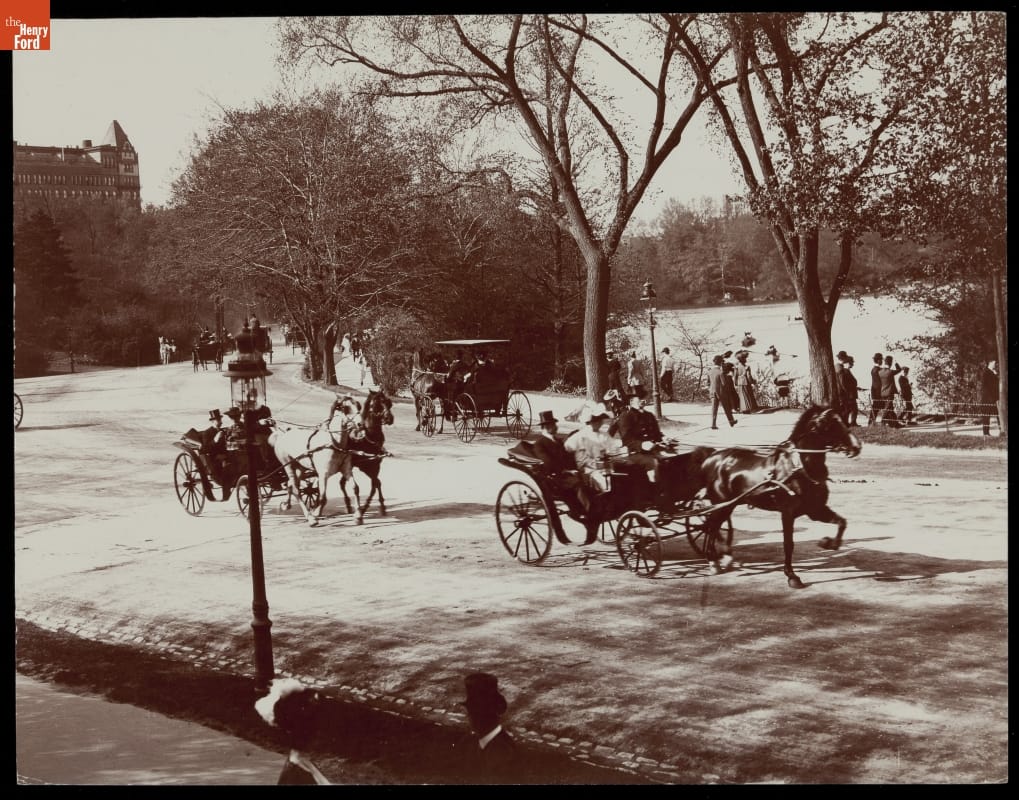 Central to horse-drawn vehicle aesthetics was the “turnout.” This meant not only the vehicle itself, but also the horses, the harness, the drivers, and often the passengers. Horses were chosen to harmonize with the size and color of the vehicle, and their harness, the drivers’ uniforms, and even the passengers’ clothes were expected to harmonize as well.

Elegant turnout was not limited to the carriages of the rich. Businesses knew that their vehicles sent a message about the business itself. A smartly turned-out delivery wagon or brewery wagon told everyone that the company that owned the vehicle and team was a quality operation. Even the owner of a simple buggy could make an impression by hitching up a good-looking horse and wearing his best clothes. 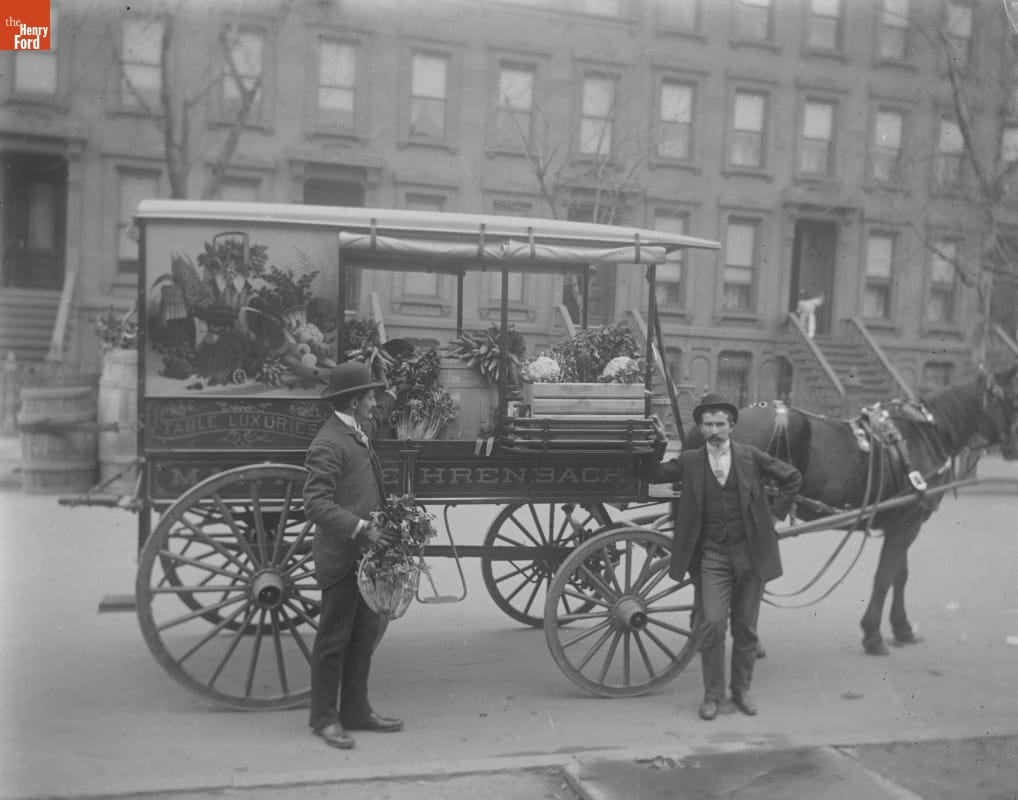 These purveyors of “table luxuries” in New York, circa 1890–1915, used a horse-drawn vehicle that showed off their products—both via artwork on their wagon and via the goods themselves. / THF38079

Many things influenced the styling of vehicles. In the United States, one of the unexpected influences was natural resources. The country had abundant supplies of strong, light wood, like hickory. After 1850, more and more hickory began to be used in vehicles. American vehicles gradually took on a lighter, more spidery look, characterized by thin wheels and slim running gear. European observers were astonished at how light American vehicles were. Many American vehicles also moved away from smooth curves to adopt a sharper, more angular look. This had nothing to with function. It was simply an expression of fashion.

When Alfred Sloan used the words, “A Car for Every Purse and Purpose,” he was describing General Motors’ goal of making a range of automobiles that filled every need and fit every budget. But substitute “horse-drawn vehicle” for “car,” and the statement could apply to the Carriage Era.

The sheer variety of horse-drawn vehicles is astonishing. There were elegant private carriages, closed and open, designed to be driven by professional drivers. At the other end of the scale were simple, inexpensive buggies, traps, road wagons, pony carts, and buckboards, all driven by their owners. Most passenger vehicles had four wheels, but some, like chaises, gigs, sulkies, and hansom cabs, had only two wheels. Commercial passenger vehicles included omnibuses, stagecoaches, and passenger wagons that came in several sizes and weights. Horse railway cars hauled people for decades before giving way to electrically powered streetcars. 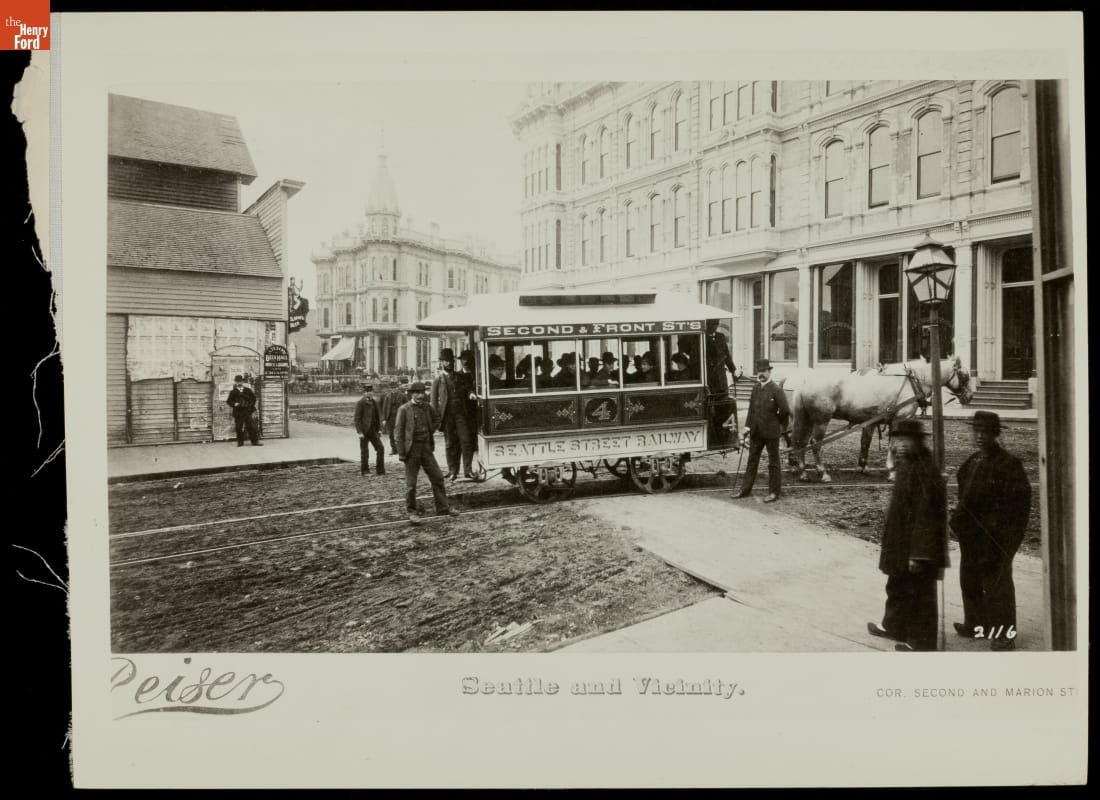 This horse-drawn streetcar, or “horsecar,” circa 1890, traveled over fixed rails on set schedules, delivering residents of Seattle to and from places of work, shops, and leisure destinations. / THF202625

Work vehicles included simple drays for hauling heavy cargo, as well as freight wagons like the Conestoga and its lighter cousin, the prairie schooner. Delivery vehicles came in many sizes and shapes, from heavy beer wagons to specialized dairy wagons. Horses drew steam-powered fire engines and long ladder trucks. Bandwagons and circus wagons were familiar adjuncts to popular entertainments, and hearses carried people to their final reward. Ambulances carried people to hospitals, and specially constructed horse ambulances carried injured horses to the vet—or perhaps to slaughter if the injury was grave enough. 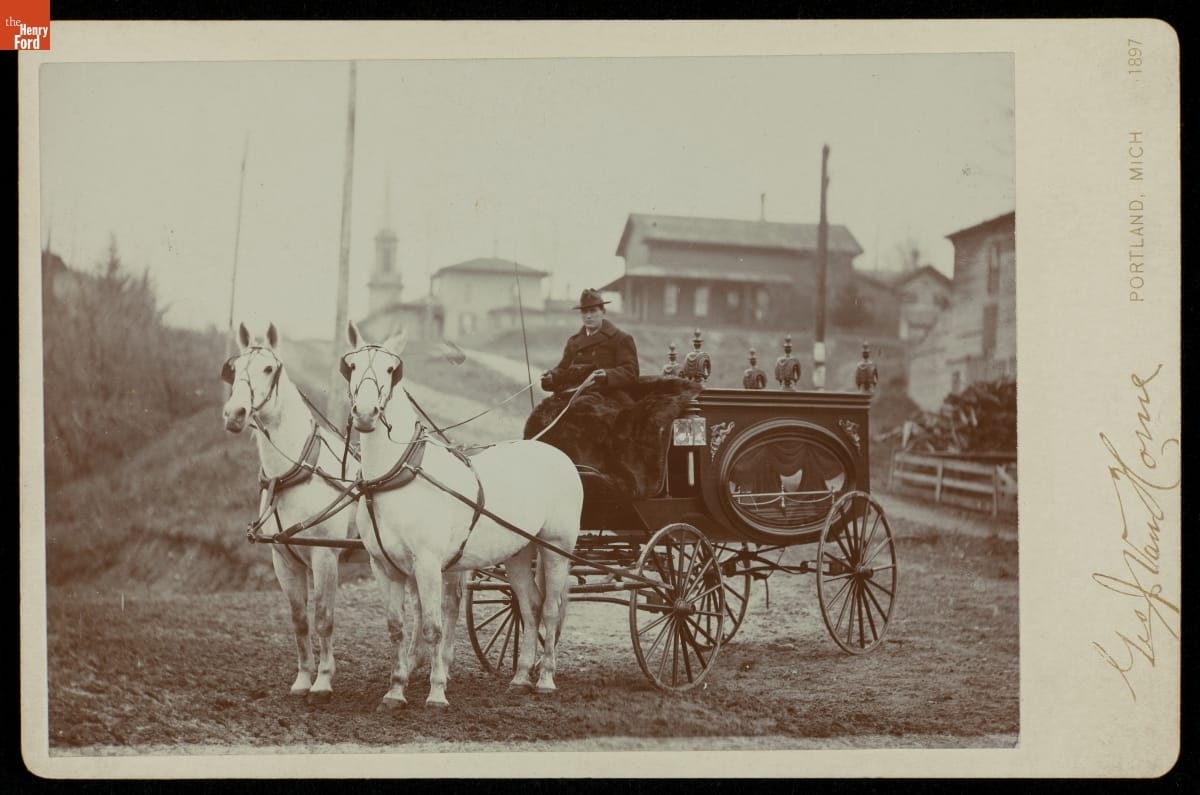 In the Carriage Era, horse-drawn hearses like this one, photographed in 1897, delivered the coffins of the deceased to their final resting places. / THF210197

On the farm, wagons came in many different sizes and were part of a range of vehicles that included manure spreaders, reapers, binders, mowers, seed drills, cultivators, and plows. Huge combines required 25 to 30 horses each. Rural vehicles often featured removable seats so they could do double duty, hauling both people and goods. Special vehicles called breaks were used to train horses to pull carriages and wagons. In winter weather, a large variety of sleighs was available, and many vehicles could be adapted to the snow by the substitution of runners for wheels. 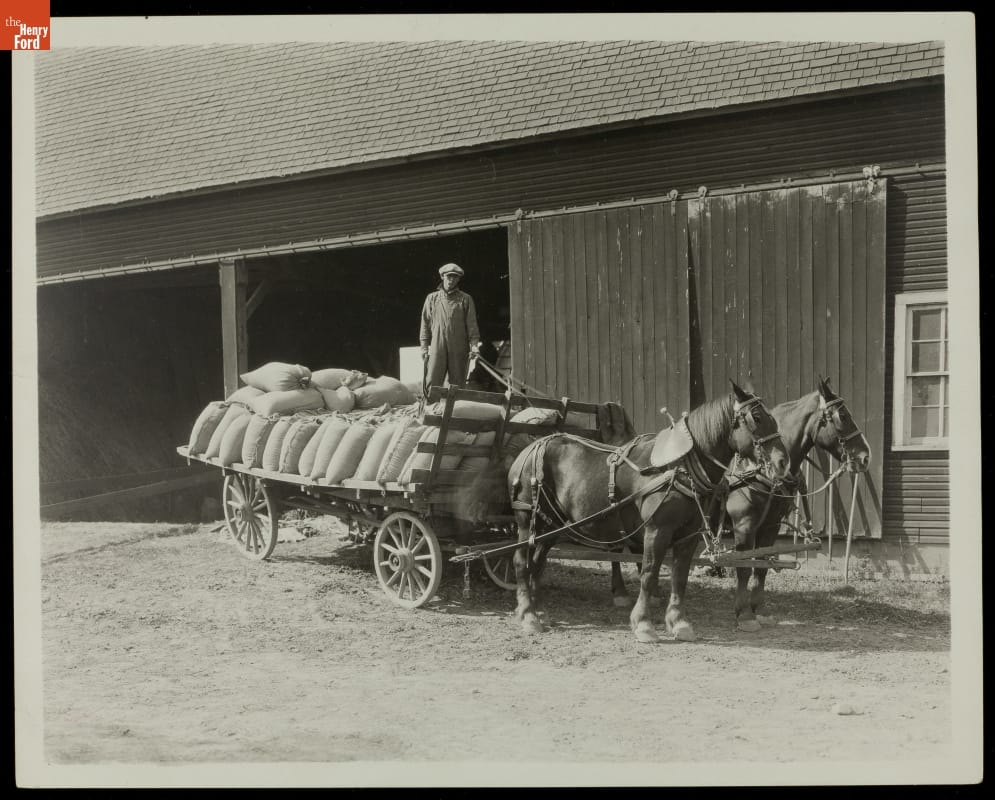 This farmer’s wagon, with an open body and no driver's seat, was simple, but handy—it could readily haul this load of bagged seed or grain. / THF200482

In a series of forthcoming blog posts, we’ll look more closely at some of these very specific uses of horse-drawn transport, along with examples from our collections.