The Hitchcock Chair: An American Innovation 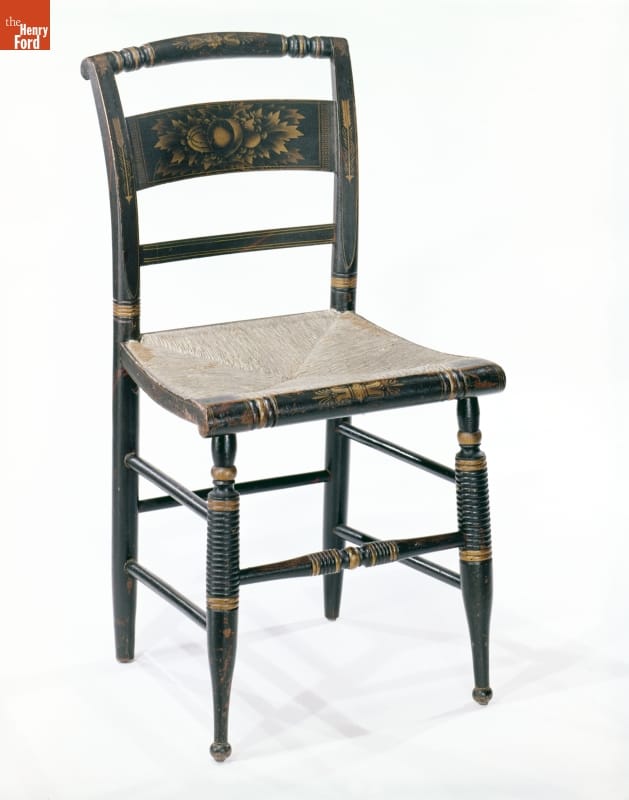 Many people believe that mass production started with Henry Ford and the Model T. But the ideas that led to this breakthrough were already being put into practice back in the early 1800s, in mills and manufactories dotting the countryside across New England. It was here that Lambert Hitchcock applied early mass production techniques to turn out chairs by the thousands—uniform, durable, attractive, affordable, and, for a time, wildly popular. 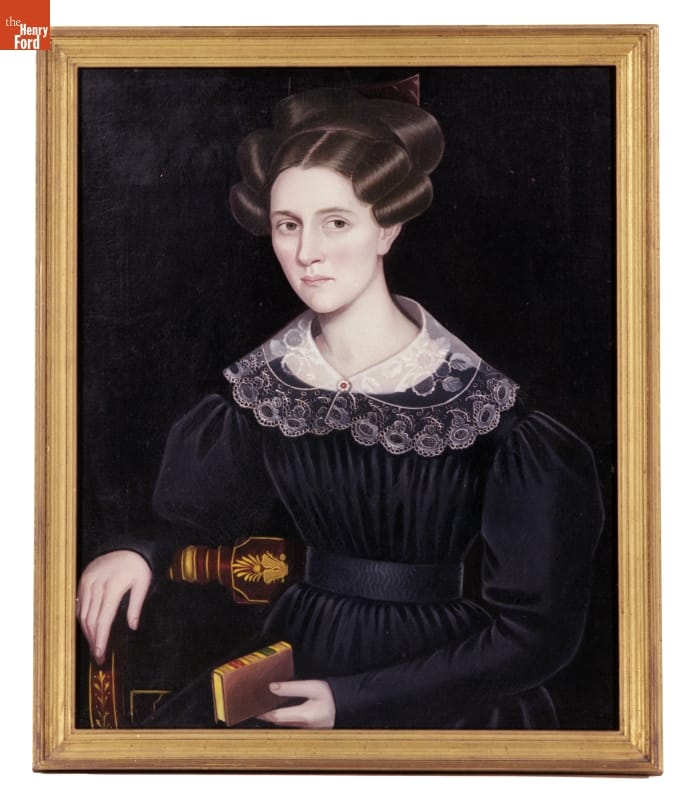 Julia Barton Hunting of Pine Plains, New York, sat on a Hitchcock chair while posing for this portrait by Ammi Phillips, about 1830. / THF95303

Invention was in the air in New England during the early 1800s. Burgeoning industries like firearms, clocks, and textiles were experimenting both with new machinery—to increase production and make up for labor shortages—and with new factory arrangements that integrated materials and activities under one roof.

Furniture making had a long tradition of handcraftsmanship, and manufacturers varied in their adoption of machine production over generations-old hand processes. Hand-crafted pieces were made to order, resulting in low production and fairly high costs. With water- or steam-powered machines to rough out the pieces, furniture makers could turn out more products at lower costs to sell to a wider market.  Neither of these processes was right or wrong—the choice was essentially a business decision.

Lambert Hitchcock chose machine- over hand-production, inspired by the bustling firearms and clock industries in his home state of Connecticut. He had started out learning the craft of fine furniture-making. But Hitchcock dreamed of manufacturing affordable furniture, using uniform parts that were quickly and cheaply made by machine, and easy to assemble.

In 1818, Hitchcock chose a site in northwestern Connecticut, where two fast-moving rivers came together. Here, using the rivers’ power to operate his machinery, Hitchcock produced a line of chairs that was so affordable he basically created a brand-new market. Before long, Hitchcock’s chair factory—in the newly named village of Hitchcocks-ville—was turning out some 15,000 chairs per year.

The price, ranging from 45 cents to $1.75 (about $10.15 to $39.40 today), certainly appealed to people. Also appealing was the idea that machines could be harnessed to produce sturdy, functional chairs that everyone could enjoy. But Hitchcock did not ignore aesthetics. His characteristic stenciling across the back chair rails served as an attractive substitute for the hand-carving on more expensive custom-made chairs.

In 1825, Hitchcock went one step further. He erected a three-story factory, arranged into sections, in which specific tools and materials were associated with logical steps in the assembly process. The ground floor held areas for rough-cutting work, like sawing, turning, and planing. On the second floor, the chair parts were bonded together with glue, then dried in a kiln until their joints were firm. On the third floor, the chairs were painted and decorated, using pre-cut stencils and pre-arranged patterns. Each of these stencils, designed to create a different part of the overall composition, was positioned on the chair back, then carefully rubbed with bronze powders to achieve the special tone and shading.

Professional male stencilers probably cut the stencils and lent their expertise, but women did much of the actual stenciling at Hitchcock’s factory. Many had learned this skill as young women at female academies popular in New England at the time. There they practiced the art of theorem painting—that is, creating stylized pictures of fruits and flowers that similarly used pre-cut stencils, metallic powders, and prearranged patterns. 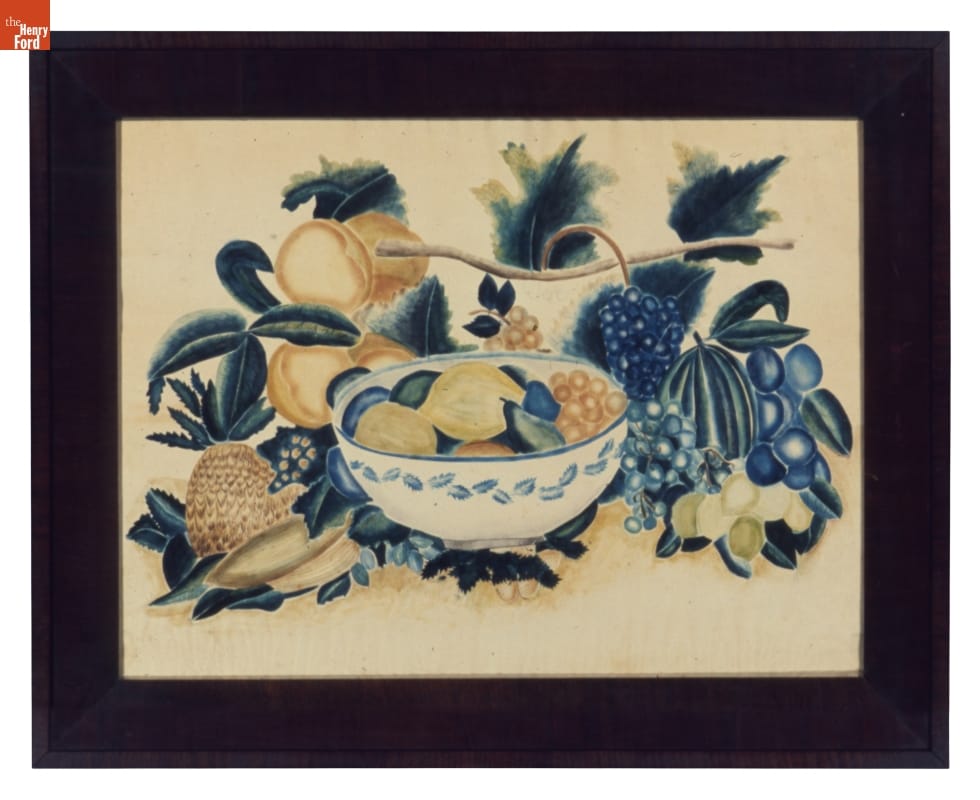 An example of a theorem painting, created in 1835 by Caroline Bennett, a young woman who would have attended a female academy. / THF119757

Women also worked as seat rushers and caners, while children often did the painting and striping.  At its peak of production, in the late 1820s and early 1830s, Hitchcock employed over 100 workers.

Lambert Hitchcock was innovative in his manufacturing techniques: integrated work processes, division of labor, and application of fast and inexpensive, yet still attractive, decorative techniques. Hitchcock was also an assertive salesman, opening retail stores in Hitchcocks-ville and Hartford (the state capital), selling chairs wholesale to dealers and store owners, and distributing his chairs far and wide through the network of itinerant Yankee peddlers.

Unfortunately, Lambert Hitchcock also made some costly mistakes. He located his factory in a very isolated area, with deplorable roads to Hartford and other markets. In 1844, Hitchcock moved his factory to a town called Unionville, banking on the construction of a new canal. But, alas, the canal construction was halted, and a new railroad bypassed the town. For all his tremendous contributions, Hitchcock died at the age of 57 with few assets to his name.

But Hitchcock’s name and his chairs lived on. The chairs were so popular during their heyday that many competitors tried to imitate both their aesthetics and production techniques. To this day, chairs of this general style are referred to as Hitchcock (or Hitchcock-type) chairs. Hitchcock chairs were also painstakingly reproduced by succeeding generations of artisans, a tribute to the genius and foresight of Lambert Hitchcock, a true American innovator.


Donna R. Braden is Senior Curator and Curator of Public Life at The Henry Ford. This post originally ran in March 2008 as part of our Pic of the Month series.