The Dog Days of Summer

Is the saying, “dog days of summer,” about dogs? Not directly; at least, not about any farm dog (or city dog) we know. Instead, the “dog” is Sirius, the nose of the constellation, Canis Major, and the brightest star in the night sky. We get the best look at the constellation between November and April, but during late summer in the Northern hemisphere, Sirius appears in the eastern sky before dawn, and “rises” with the sun. Ancient Greeks considered Canis Major a homage to Orion’s greater hunting dog, Laelaps. Ancient Egyptians associated the rising of Sirius with the sun, and believed the “double sun” created the hottest season of the year. Today when we hear, “Sirius,” we might first think if Sirius Black, Harry Potter’s godfather, and not about the association between the star, Sirius, and summer heat. Let’s not forget the historic association between the hot “dog days of summer” and Sirius’ rising in tandem with the sun (July 22 through August 23).

During these “dog days,” let’s take a look at some of the photographs in The Henry Ford's collections, and think more about the dogs and the people that posed with them. 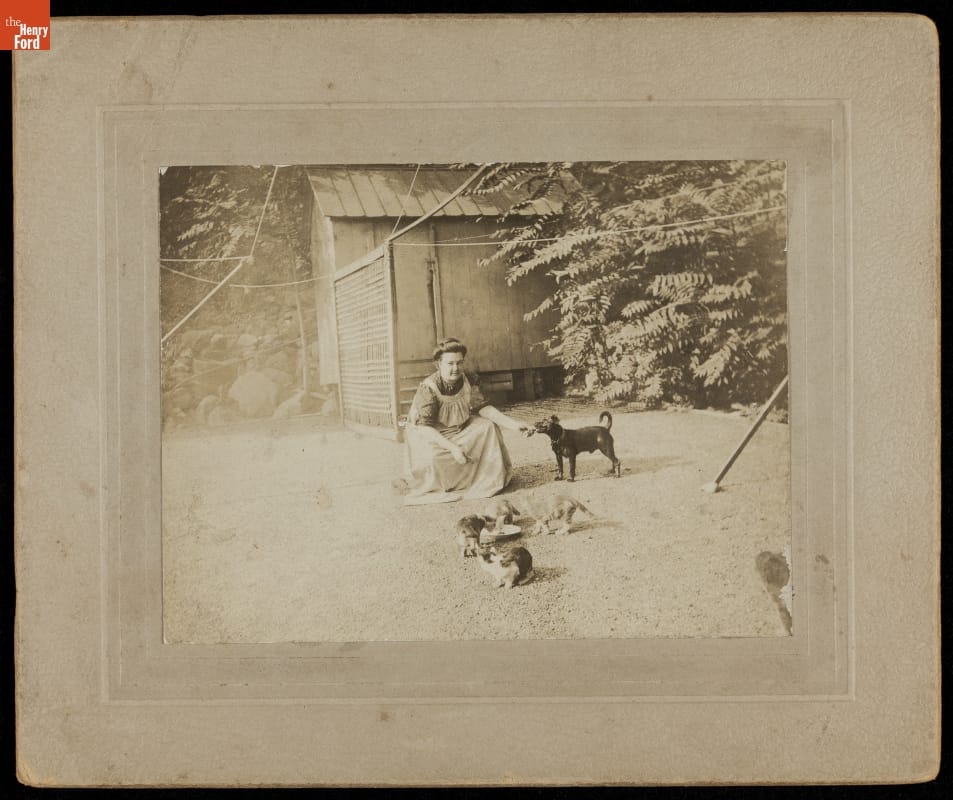 Can we tell whether Nellie consider her cats, or her dog as her “best friend”? It is difficult to tell because the image indicates that she paid attention to both the felines and the canine. A closer look indicates that the dog has a collar and that Nellie is either feeding him a treat or has a stick as a chew to distract him from the cats at the feed bowl. 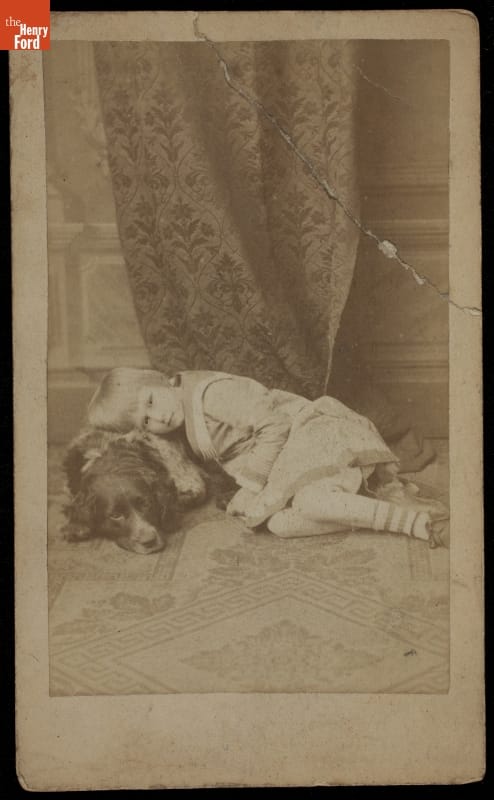 Other photographs remind us that dogs lure us into a relaxed state. This carte-de-visite of a girl and her dog, taken in a photographer’s studio, shows a remarkably relaxed pose given the often formal and stiff portraits of the Civil War era. How many of us spend hours lounging with our own dogs? 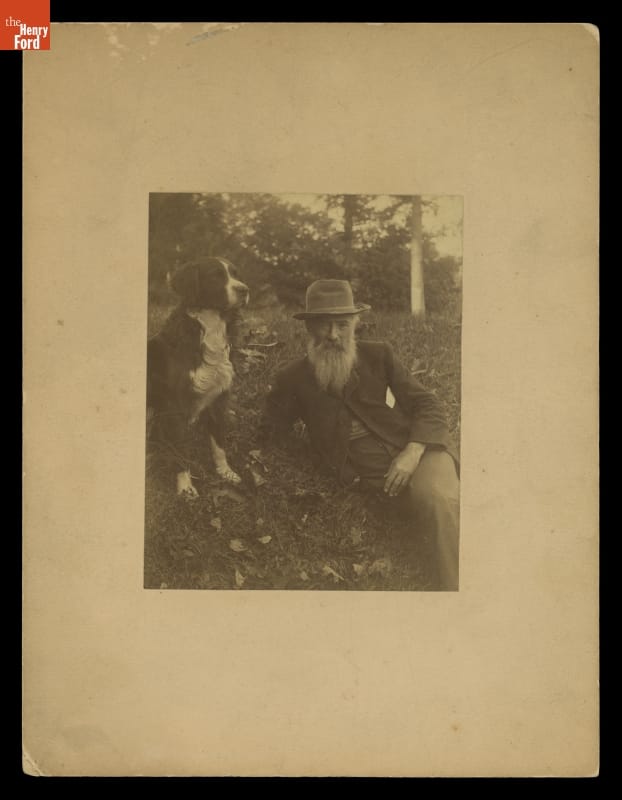 Famous men struck poses with their favorite dogs, too. This photograph of internationally renowned naturalist, John Burroughs, shows him at eye level with his dog, “I Know,” sometime between 1885 and 1890. A closer look at “I Know” indicates that he has some border collie features, including his alert view and focus beyond the camera, the furry, light-colored ruff, and the white blaze on his face. 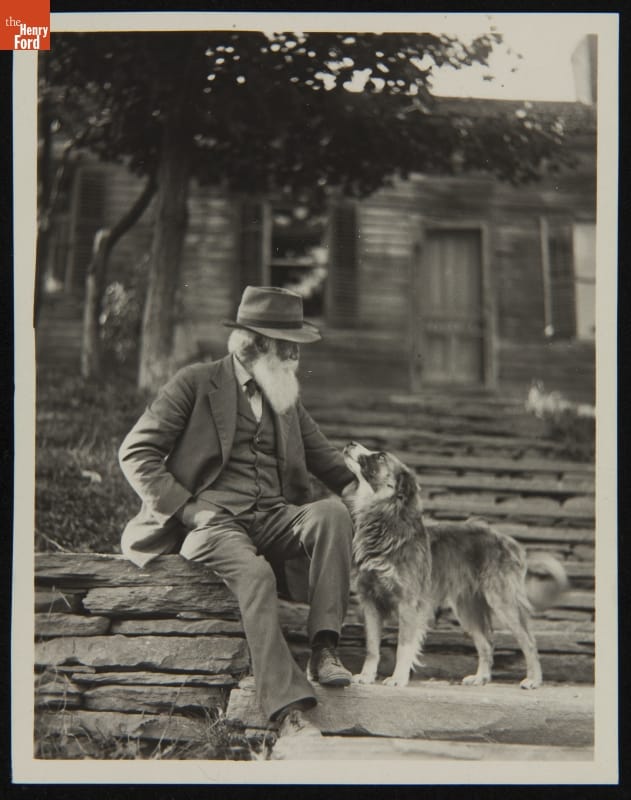 A photograph taken thirty years later (1918) shows John Burroughs at his birthplace in Roxbury, New York, with another attentive border-collie-type dog. This photograph could be of anyone anywhere with a loyal canine pet. 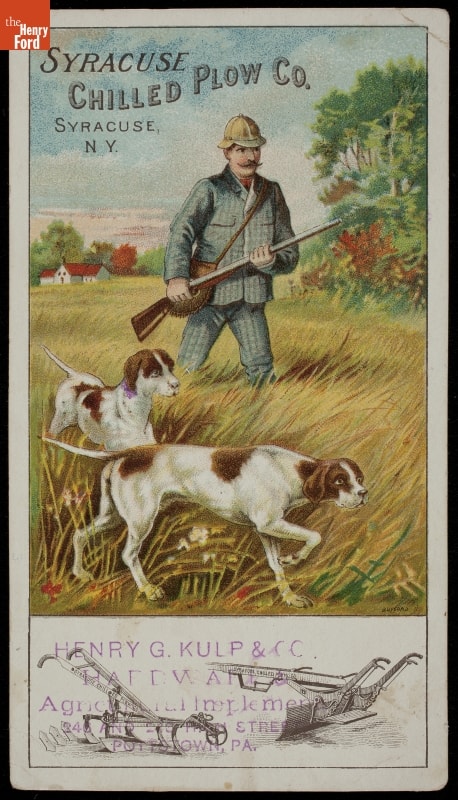 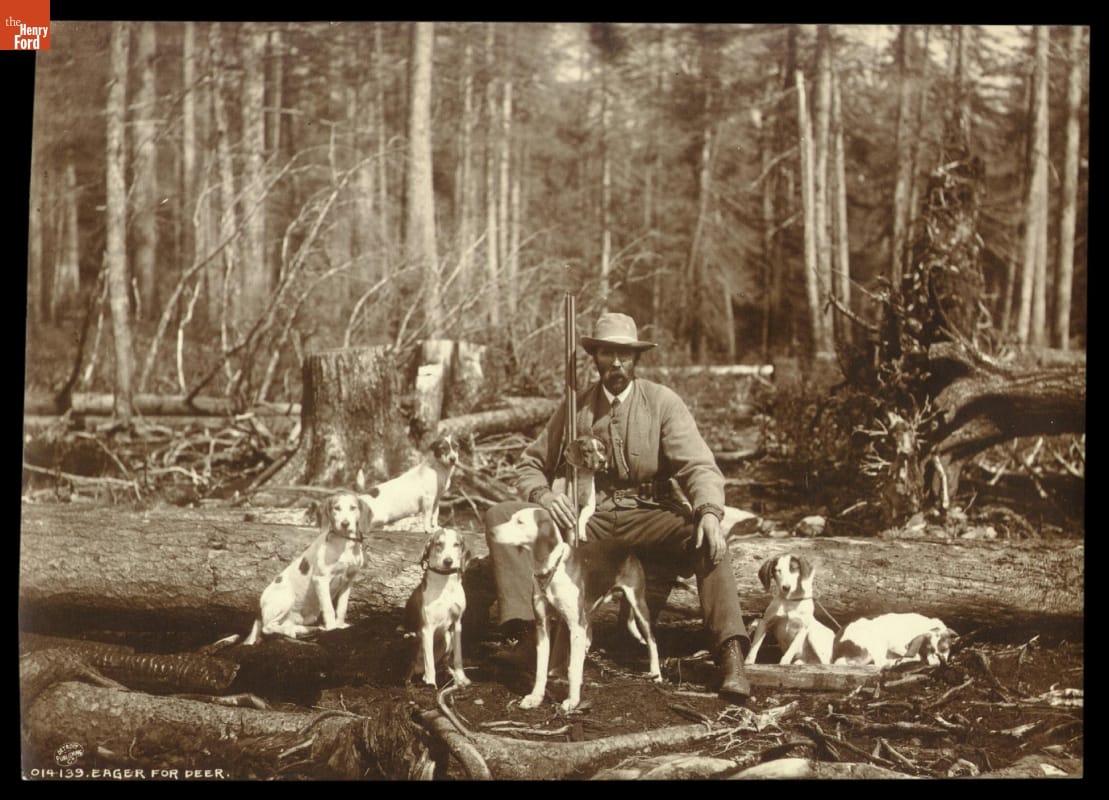 Working dogs had jobs to do, but they also bonded with their handlers. A photograph of a man sitting on a felled tree has seven hunting dogs close in proximity, including one in his arms. At least one of the dogs is on a chain, and most have collars, tools which helped hunters controlled the pack of dogs that they used to flush out deer or other game from heavily wooded areas. 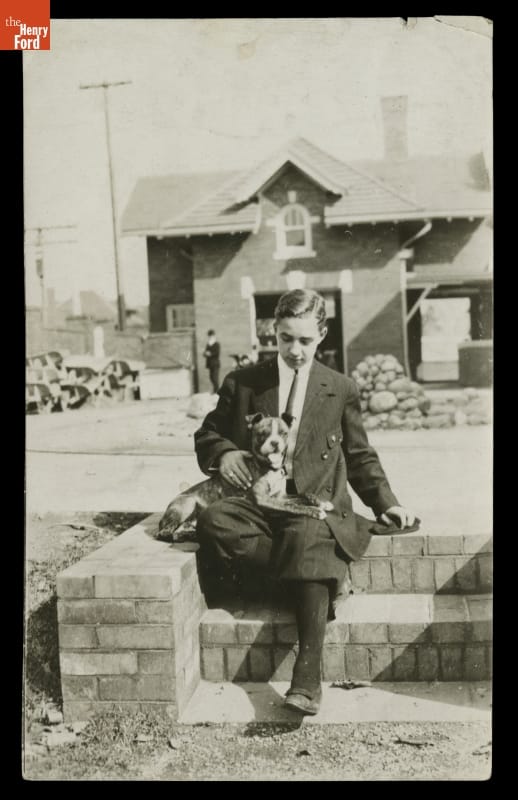 Edsel Ford with His Pet Dog at the Ford's Edison Avenue House, Detroit, Michigan, circa 1908. THF95291

Other dogs lived more of a life of leisure. A photograph of Edsel Ford taken around 1908, had the following inscription on the back: "Edsel & his dog, sitting on step that goes down into our garden. Garrage (sic) in rear.” Clara Bryant Ford likely took the photograph and wrote the description. It was taken at the Edison Avenue Home in Detroit. 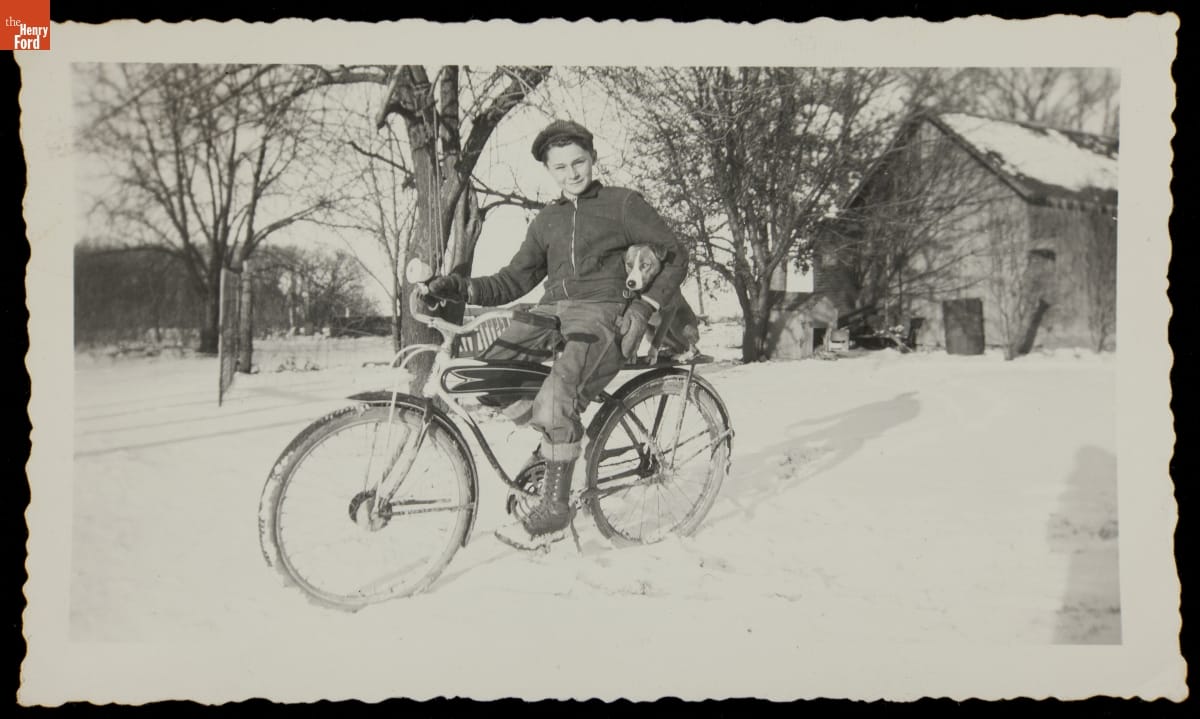 Compassion can make young men do some surprising things to protect their dogs. Some dogs romp in the snow, but this fellow seems to be sparing his little rat terrier the shock by giving him a ride on the back of his bicycle. 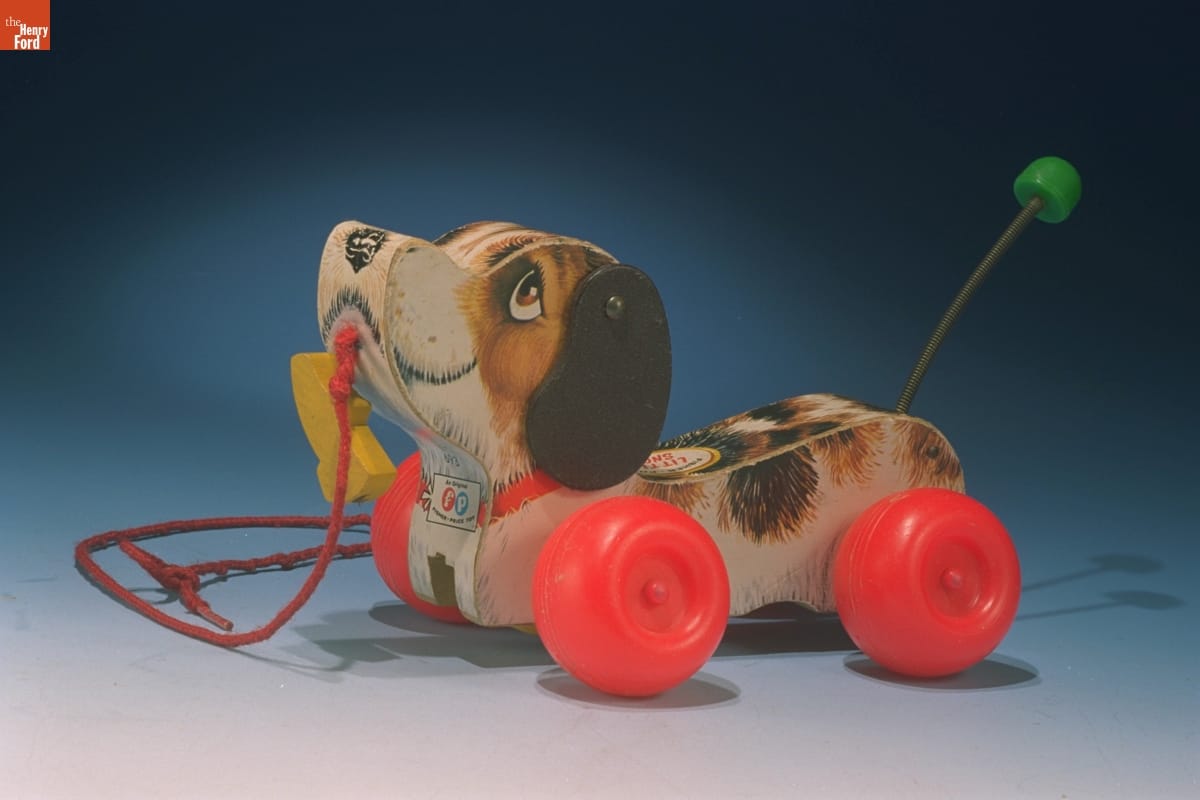 Numerous images of dogs and of objects featuring dogs exist in the collections of The Henry Ford. How many of our parents thought they could use a “Little Snoopy” pull toys to distract us from the craving for a real dog?

You can see more dog-related items in The Henry Ford collections here.