The Enigmatic Sidney Houghton, Designer to Henry and Clara Ford

Sidney Houghton is one of the most interesting and yet-to-be-documented figures in the group surrounding Henry and Clara Ford. Many in the Fords’ entourage are colorful and well-researched, including Harry Bennett, Henry’s security chief, known as the notorious head of the Ford Motor Company “Service” Department; Henry’s business manager, Ernest Liebold, who handled all financial transactions; and even their son, Edsel Ford, whose life and important cultural contributions are thoroughly documented. The great Ford historian Ford R. Bryan tells the story of these figures in his book, Henry’s Lieutenants (1993). Bryan frequently mentions Sidney Houghton, most notably in his book Friends, Family, and Forays (2002).

Perhaps Houghton remains undocumented because he was British, and in the decades before Internet resources became widely available, American researchers like Bryan had limited access to British sources. Today, we are fortunate to not only have the profound resources of the Benson Ford Research Center at The Henry Ford at our disposal, but also digital access to repositories around the world. As Curator of Decorative Arts, I have spent considerable time trying to fully grasp the enigmatic Mr. Houghton—his biography, his business, and, most importantly, his relationship with Henry and Clara Ford. This blog is the first in a series that will delve into this mostly hidden story.

Now, you may ask, why should we care about the Fords’ interior designer? Seeing and understanding the interior environments that the Fords created to live and work provides us with great insight into their characters, creating a well-rounded picture of their lives. We can understand their motivations and desires and see how these changed over time. We can peel back the larger-than-life personas of the Fords that come with such public lives and see them as individuals.

What Do We Know About Sidney Houghton’s Early Life?

Researching Houghton was not easy. The first place I looked was Ancestry.com, but Houghton is a very common name in Britain. After a lot of digging and working with colleagues at The Henry Ford, I located Sidney Charles Houghton, who was born in 1872 and died in 1950. He was the son of cabinetmaker Charles Houghton, which likely led to his interest in furniture-making and interior design.

One of the questions still in my mind is: Where was Houghton educated? To date, I have not been able to find out which art school he attended—these records do not appear to be available online. What I do know is that he married in 1895, and had a family consisting of two sons by 1898. By 1910, according to the British census, his business, Houghton Studio, was established in London.

Houghton in World War I

From Ford R. Bryan’s publications and resources in the Benson Ford Research Center, I knew that Houghton was in the British Navy during World War I. I searched the British National Archives and found his fascinating military service record. Houghton, I discovered, was an experienced yachtsman, and was commissioned as a commander. He helped to create patrol boats, called P-boats, that swiftly located enemy submarines. In 1917, he was sent to the United States to work with Reginald Fessenden (1866–1932), a Canadian-American inventor who worked in early radio. Together, they developed an early sonar system to locate enemy ships, submarines, and mines. For his contributions to the war effort, Houghton was awarded the Order of the British Empire, or O.B.E., in 1919.

Through the reminiscences of Ernest Liebold, held in the Benson Ford Research Center, I discovered that Houghton was brought into the Ford Motor Company’s war effort to create what Liebold called the Eagle boats. These were similar to the British P-boats. Unlike the relatively simple P-boats, though, the Eagle boats would be like a “young battleship,” according to Liebold. He went on to state that the boats would “have the eye of an eagle and would flit over the seas.” 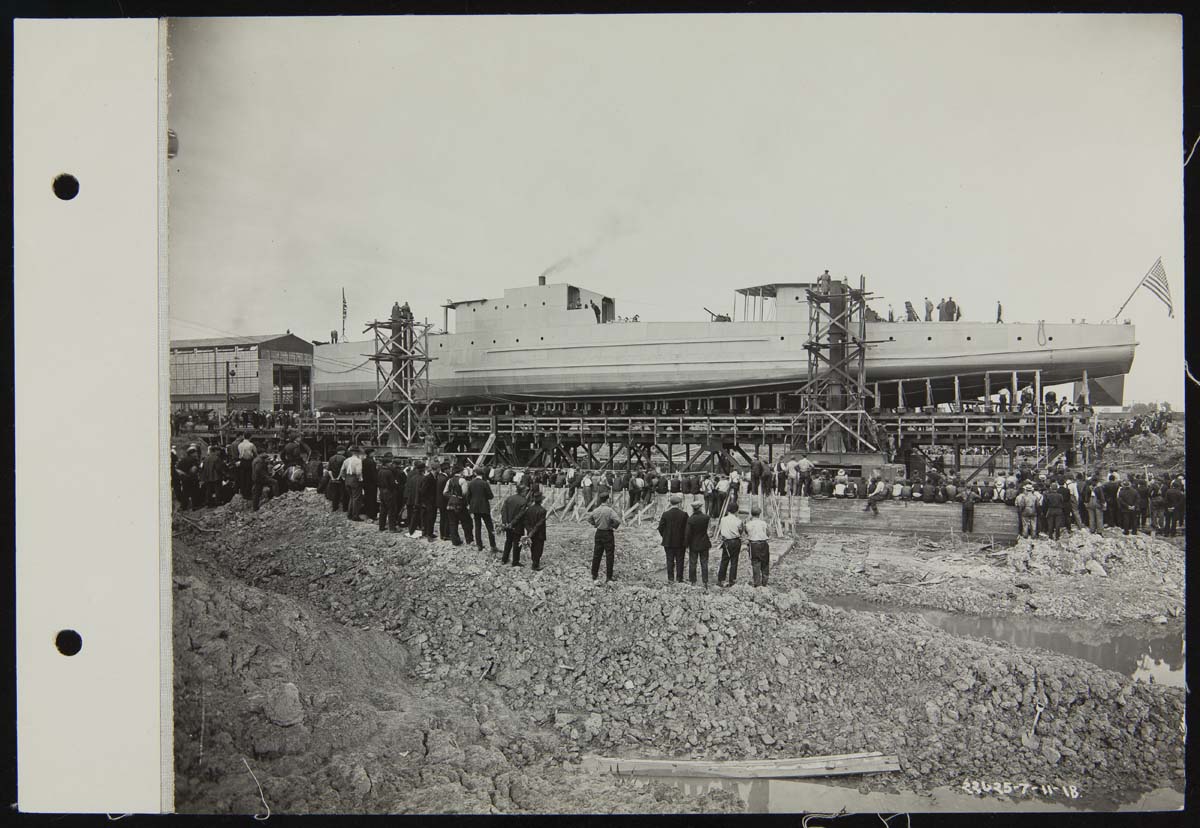 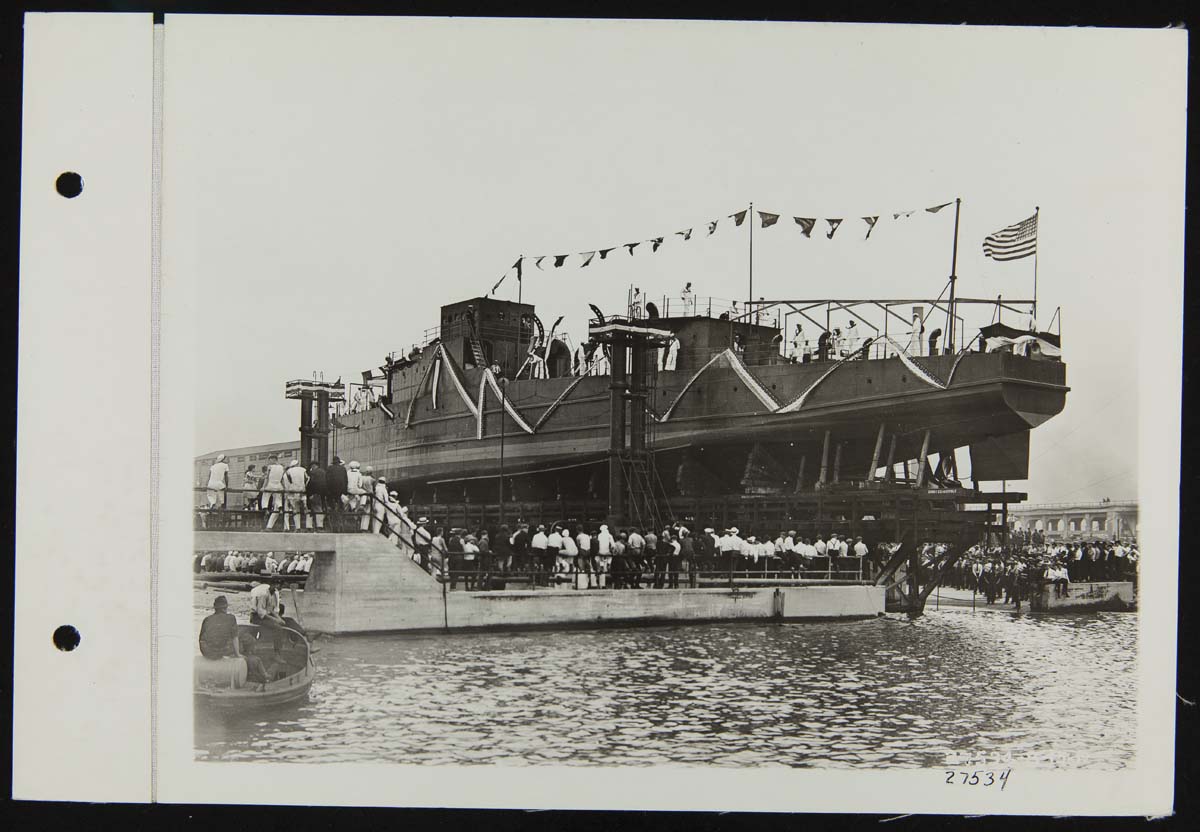 Houghton came along, and he said, “We ought to have a listening device put on those ships to detect submarines.” That is where [Thomas] Edison came in to develop this listening device, and I think Houghton is the man who contacted him. I remember him coming out with a long rod and stuff, and it was so darned secret that nobody knew a thing about it.

They had a special room provided for it in the Eagle boats. It was to be this listening chamber in which the apparatus was placed. They could detect a submarine by the beat of its propellers. A magnetic signal could determine just exactly in what direction it was, [sic] and approximately, from the intensity of the sound of the beating of the propeller, they could tell just what distance and in what direction it was.

They would radio that information to the nearest battleship in a cordon of battleships, or destroyers or whatever they had. They would be able to attack the submarine, you see. That was the object of it.

As an integral member of the Eagle boat team, it is highly likely that Houghton travelled to Dearborn and met Henry Ford. We know from later correspondence that Henry and Clara developed an abiding personal friendship with Houghton which continued through the 1920s. They commissioned a series of projects, beginning with the Fords’ yacht, the Sialia—but I am getting ahead of myself. At this point, I would like to discuss Houghton’s work in interior design, specifically his role as an interior architect. 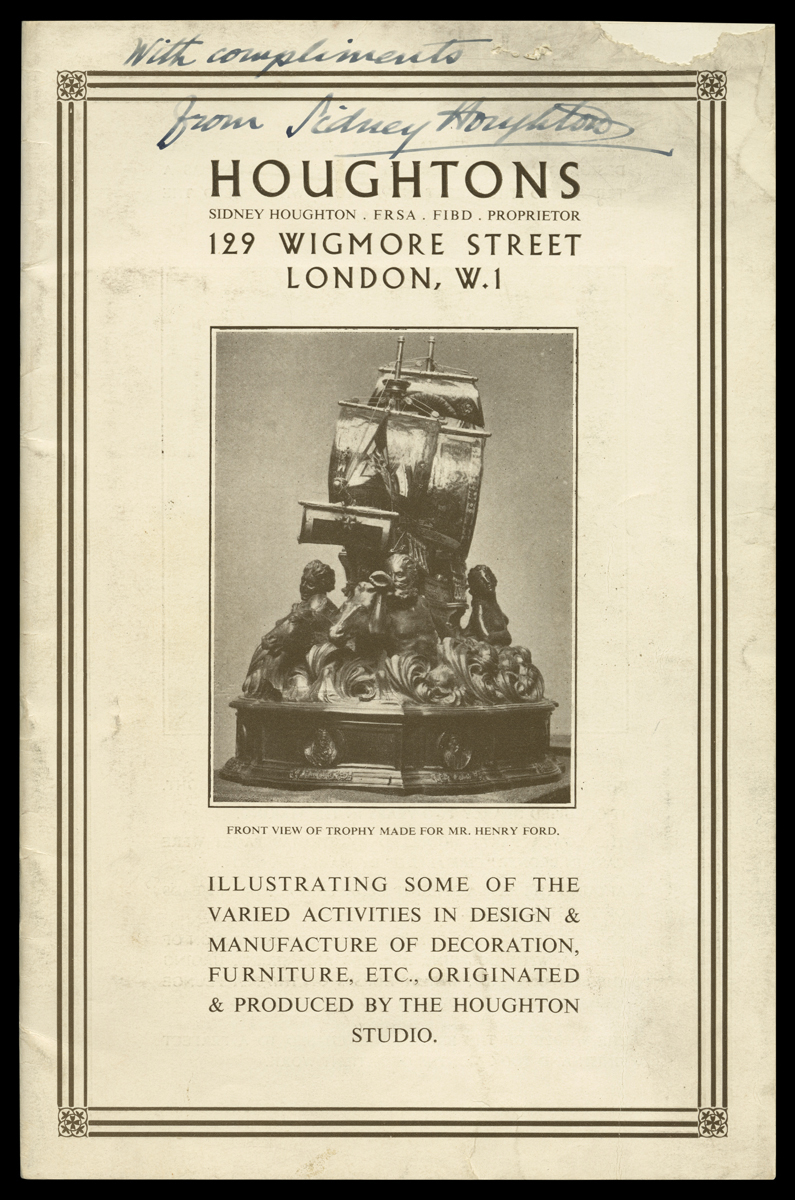 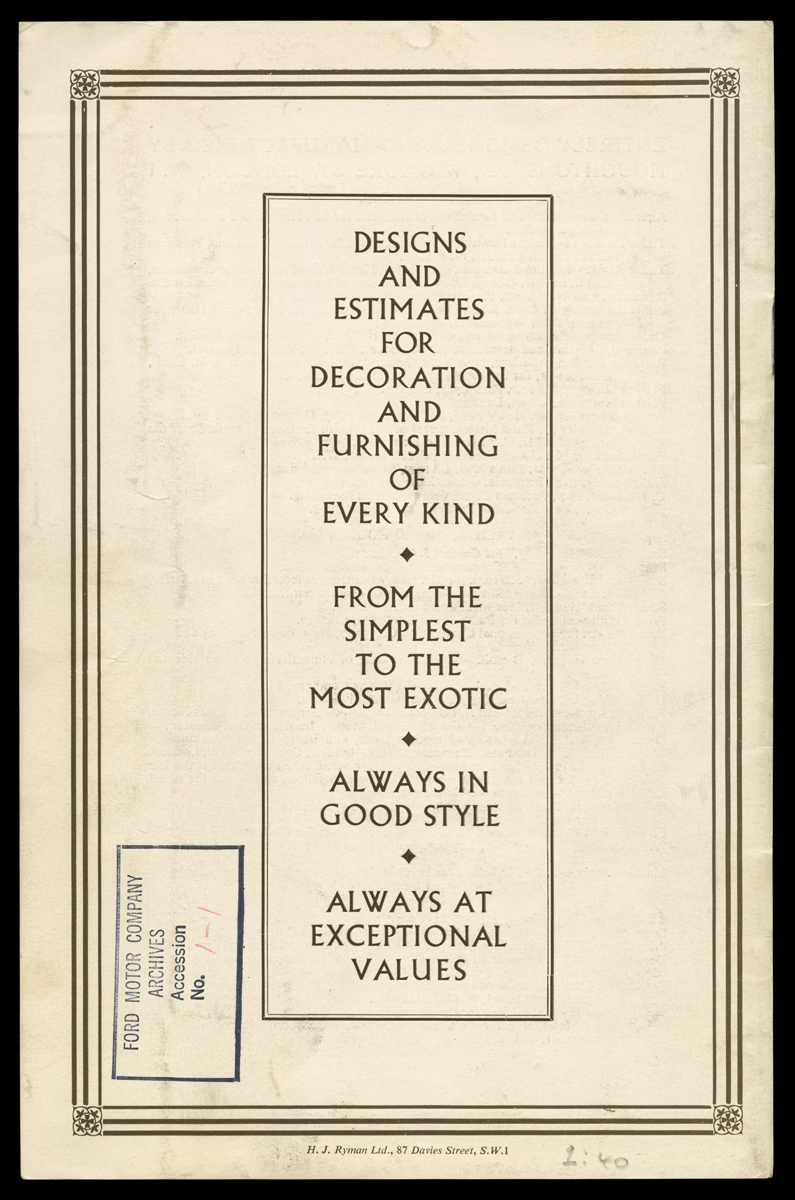 This brochure or trade catalogue gives us great insight into the Houghton Studio. We date it to the late 1920s, when the projects Houghton worked on for the Fords were complete. From the text, we can see just what the firm’s capabilities were. The back cover reads: “Designs and estimates for decoration and furnishing of every kind / from the simplest to the most exotic / always in good style / always at exceptional values.” What this tells us is that Houghton Studio was a rarity in the interior design world. 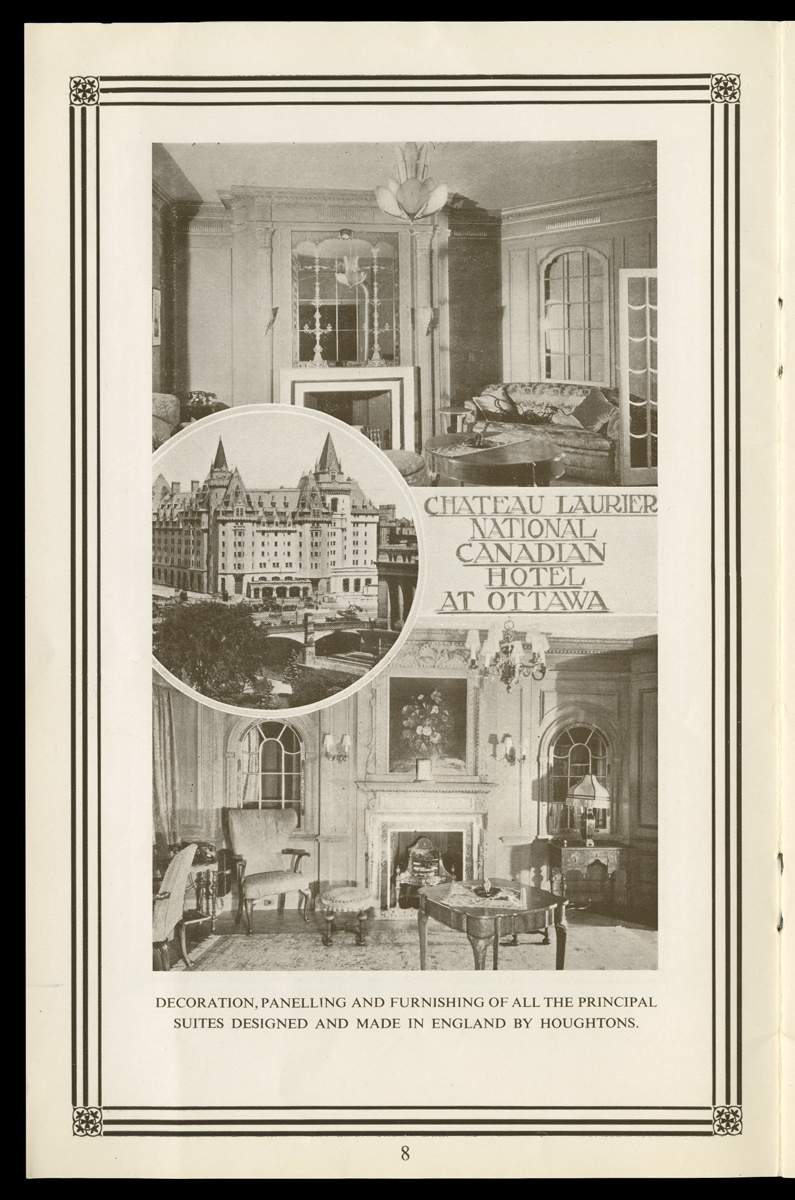 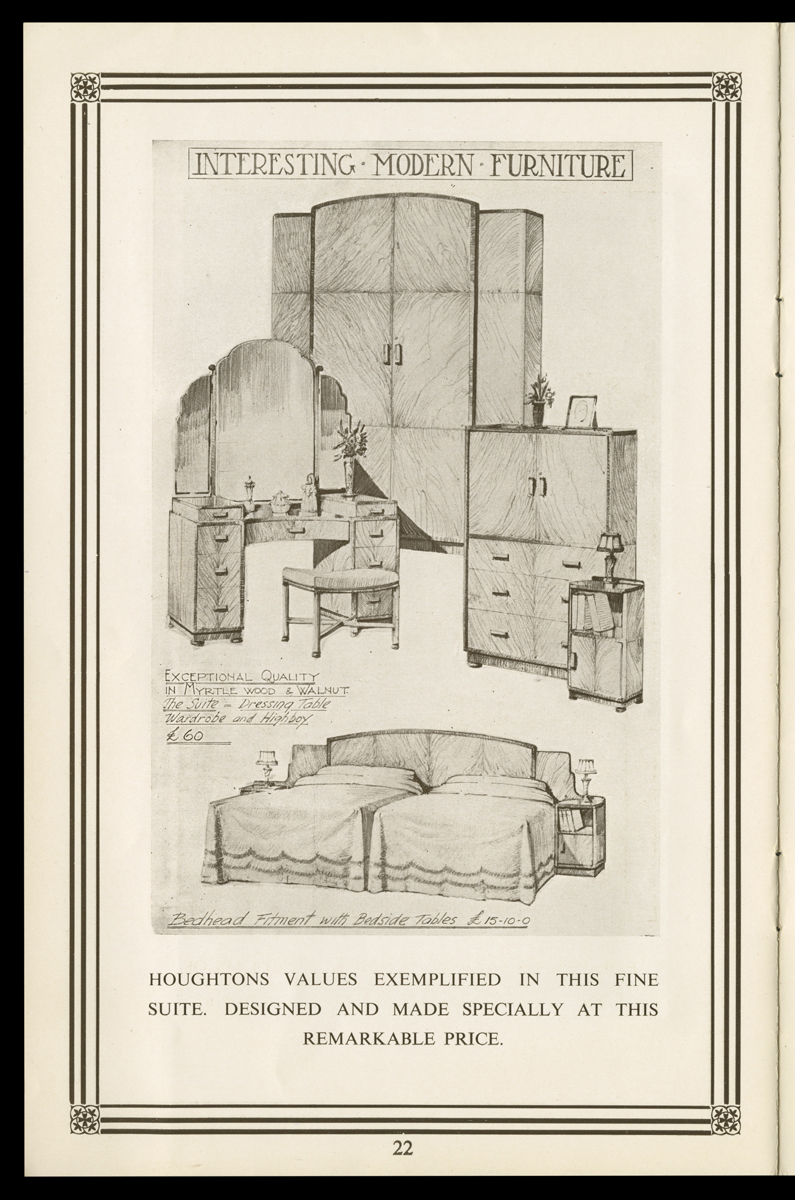 Like most of his contemporaries, Houghton worked in a variety of styles, as demonstrated in the images above—from period revivals as seen in the Chateau Laurier National Hotel, in Ottawa, Canada, to his renderings for “Modern” furniture, done in what we would describe as the Art Deco style, which was synonymous with high-end 1920s taste. 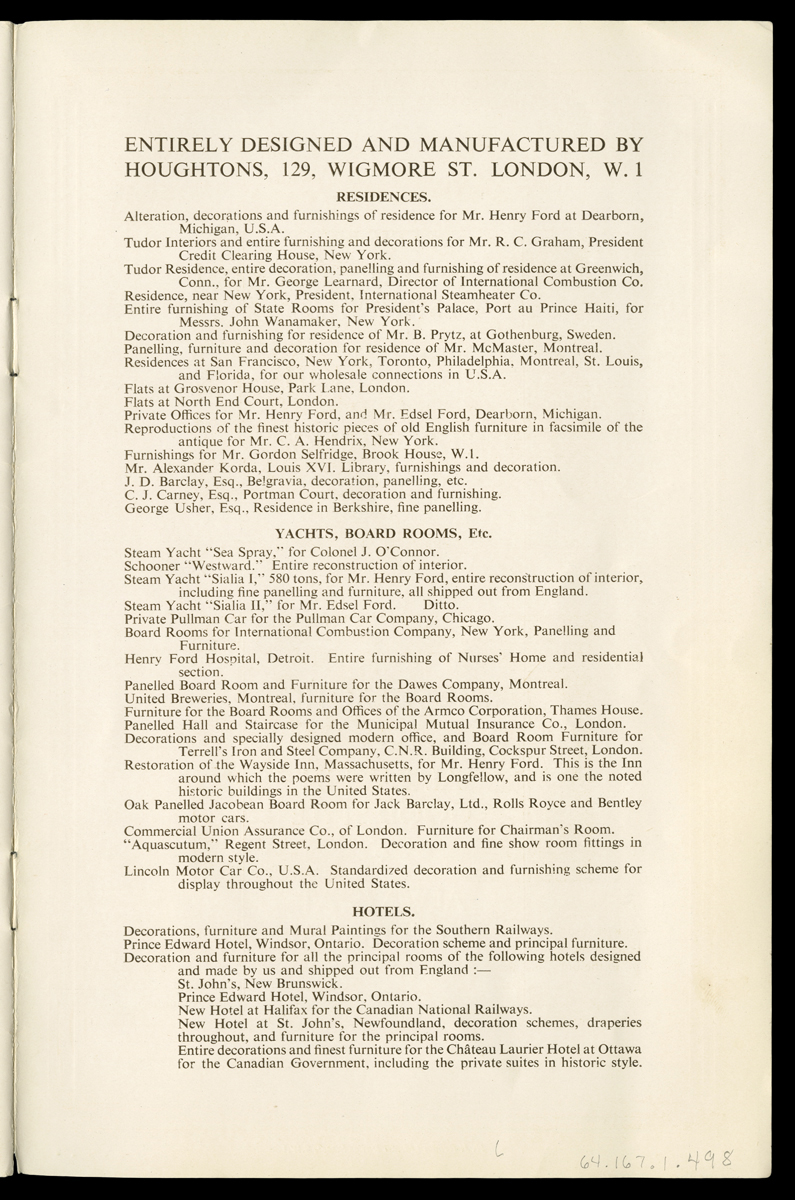 One of the most interesting pages in the catalogue notes several commissions to design interiors for yachts, which was a specialty of the Houghton Studio. The most important of these was a commission for the Sialia, Henry Ford’s yacht. The Fords purchased the yacht just before World War I, and it was requisitioned for use by the U.S. Navy in 1917. The ship was returned to Henry Ford in 1920. At this point, Sidney Houghton was asked to redesign the interiors. 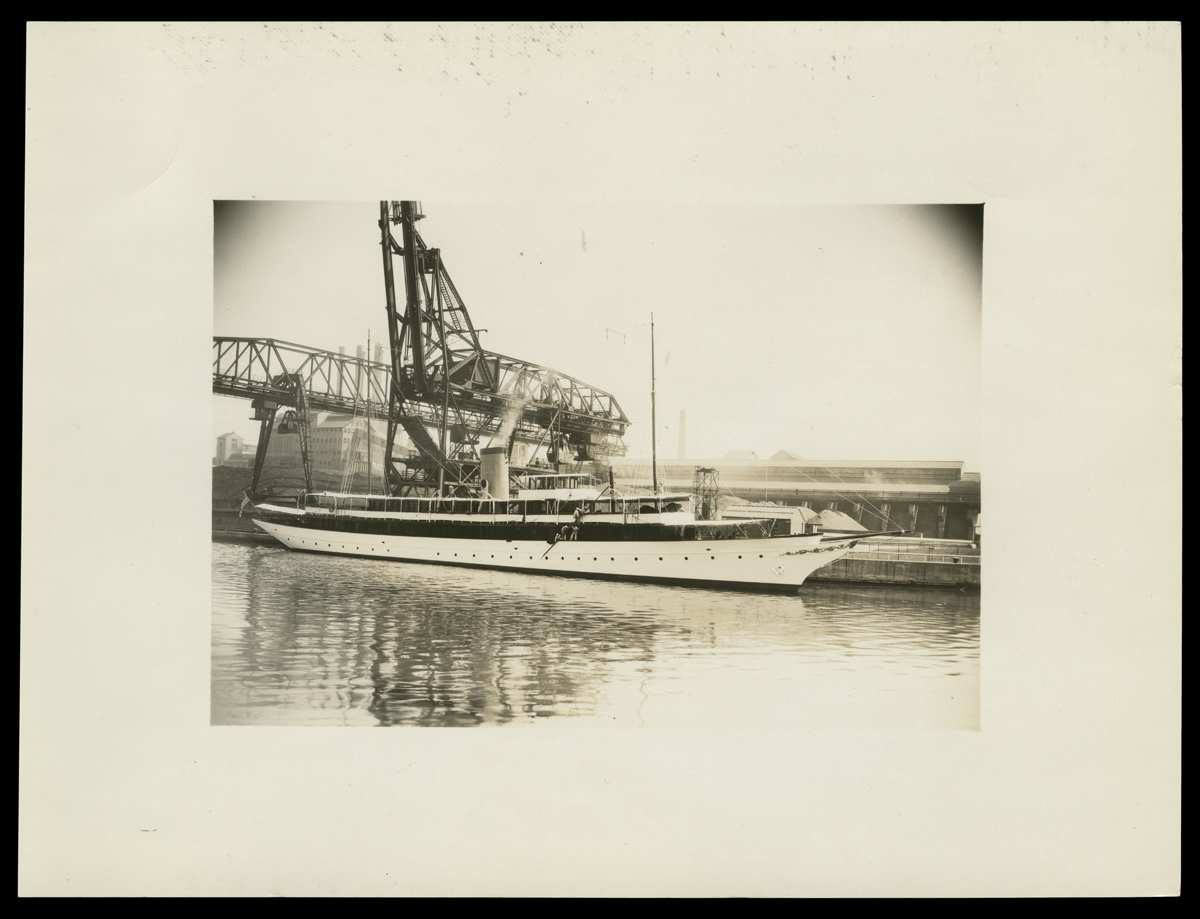 According to Ford R. Bryan, the cost of the interiors was approximately $150,000. As seen here, the interiors are comfortable, but relatively simple. During the 1920s, the Fords occasionally used the Sialia, but Henry and Clara Ford preferred other means of travel, usually by large Ford corporate ore carriers, when they traveled to their summer home in Michigan’s upper peninsula. According to the ship’s captain, Perry Stakes, Henry Ford never really liked the Sialia, and he sold it in July of 1927. 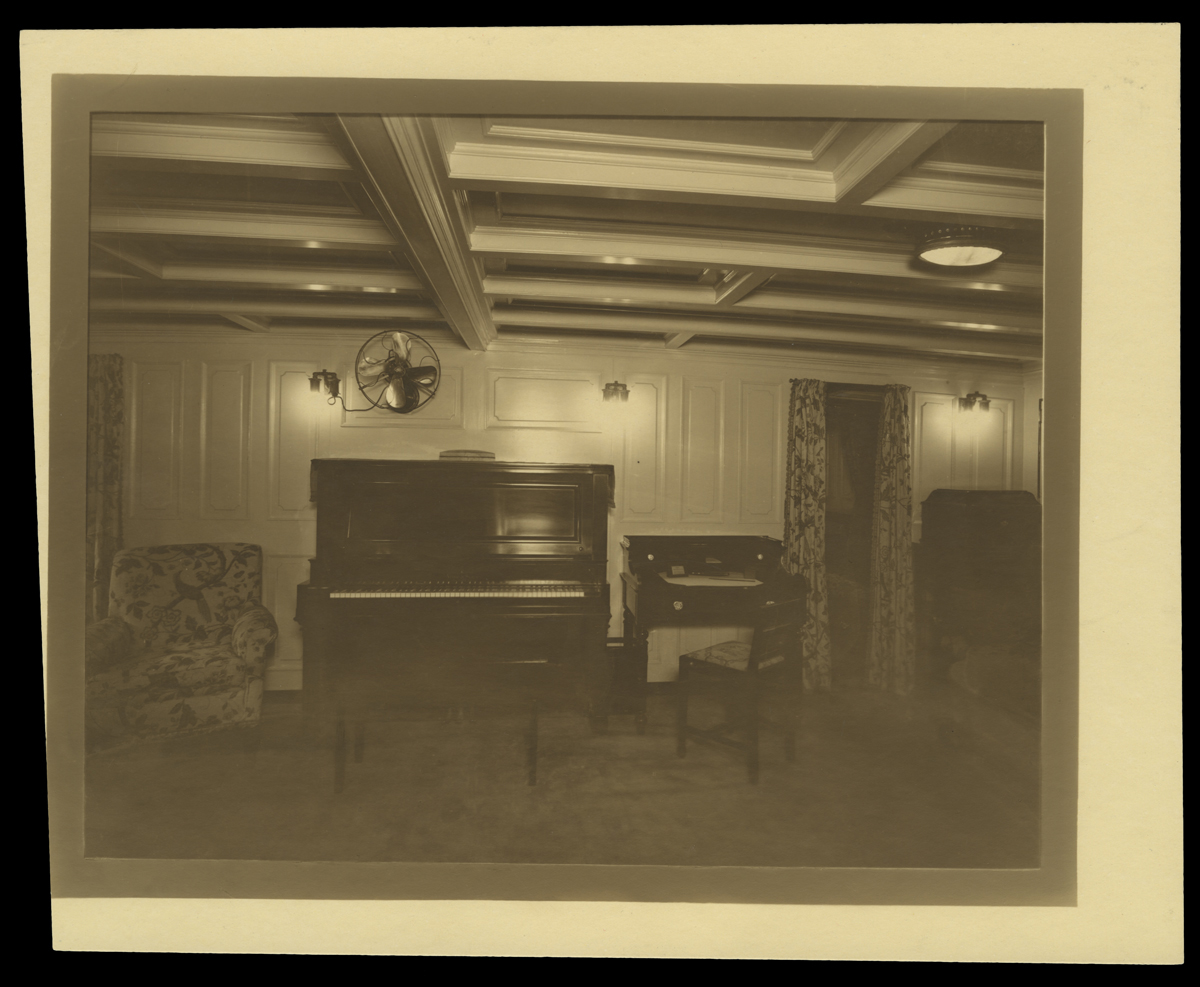 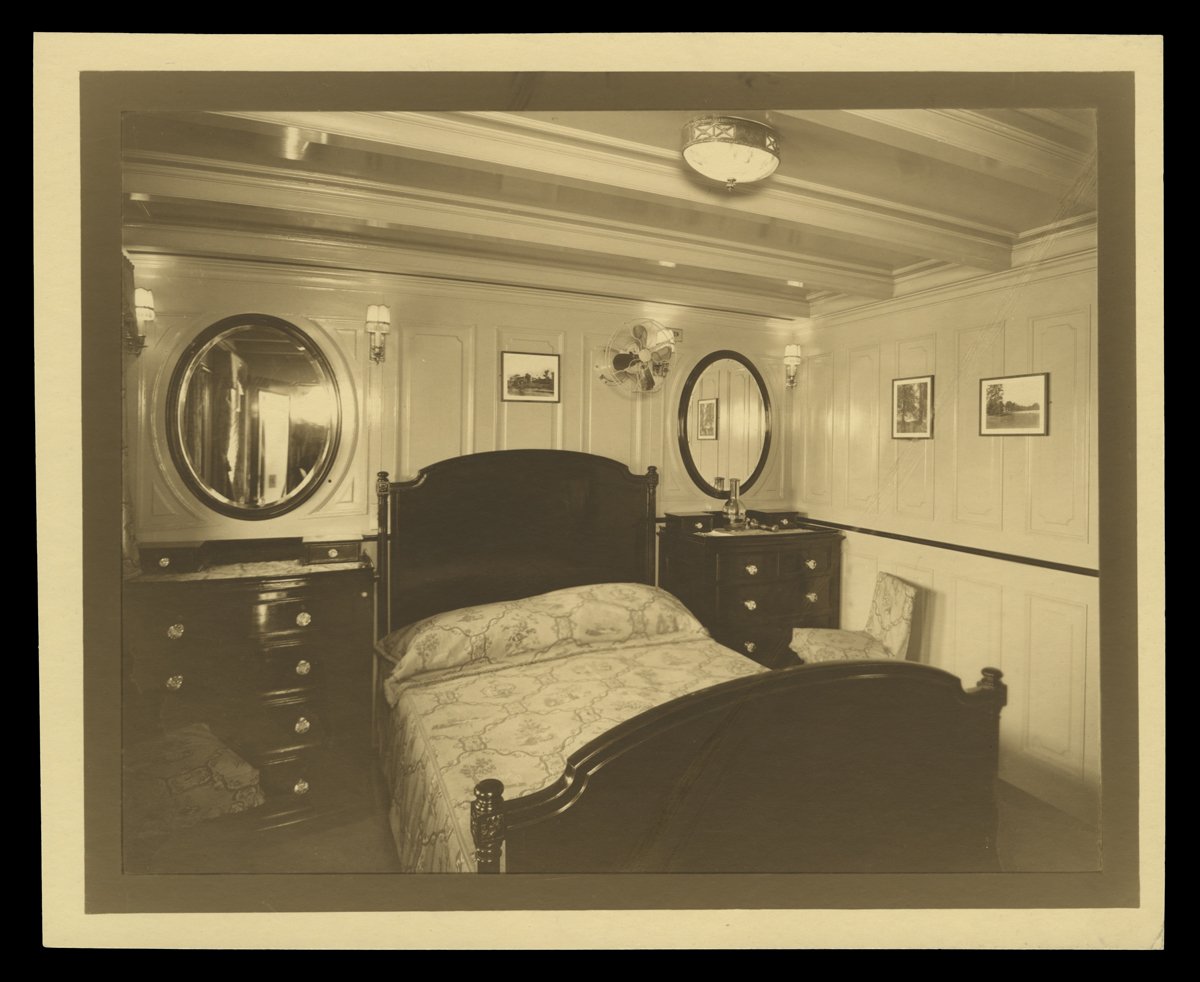 Following the Sialia commission, the Fords found a kindred spirit in Houghton. The archives contain ample correspondence from the early 1920s, with the Fords asking Houghton to return to Dearborn. Houghton subsequently received a commission to design the interior of the Fords’ Fair Lane railroad car in 1920. Between 1920 and 1926, Houghton was deluged with projects from the Fords, including the redesign of the Fair Lane Estate interiors, design of Henry and Edsel’s offices in the new Ford Engineering Laboratory, interiors for the Dearborn Country Club, as well as interiors for the Henry Ford Hospital addition.

In the next post in this series, we will look closer at several of these projects and present surviving renderings from the Fair Lane remodeling, as well as furniture from the Engineering Laboratory offices.