As Project Curator for the William Davidson Foundation Initiative for Entrepreneurship, I research objects within The Henry Ford’s collections that tell entrepreneurial stories. Most recently, I delved into the Label Collection’s food labels – a collection of beautiful labels from canned food and West Coast fruit crates. This post will highlight the story of “Fruit King,” Joseph Di Giorgio.

Giuseppe “Joseph” Di Giorgio (1874-1951) was introduced to the fruit business at a young age. His father grew lemons and grapes, among other seasonal crops, in Sicily. In 1888, at the age of 14, Di Giorgio immigrated to the United States. When he arrived in New York, speaking little-to-no English, he found work as a fruit jobber, a middleman who would buy large quantities of goods from fruit packers and sell those goods to retailers or merchants.

After a short time of learning the business, Di Giorgio moved to Baltimore, Maryland, where he set up his own store selling lemons. By the age of 16, he had become one of the most successful fruit receivers and distributors in Baltimore. But lemons were a seasonal crop. To supplement his income in the off-season, he began importing bananas from the West Indies – a prosperous endeavor that eventually became a year-round business.

His good fortune allowed him to invest in other business ventures, including partnerships with investors to open auction houses for fresh produce in various cities across the United States. Shipments of produce were brought into the auction houses and sold quickly at fair prices to merchants who would gather daily for their pick of the products. It was a profitable business. Owners of the auction house received money from packing and shipping companies for hosting the sale, and received commission on the sold goods. By 1904, Di Giorgio owned auction houses in New York and Baltimore, and had partial interests in others along the East Coast and throughout the Midwest.

Refrigerated rail cars, like this one, allowed meats and produce to be shipped for long distances without spoiling. This innovation allowed farmers to reach new and distant markets, and it provided tastier, healthier foods to consumers.

Joseph Di Giorgio recognized that a direct influence in the growing and packing business would allow him to control every aspect of the fresh produce business – the orchards where the fruit was grown, the harvesting and packing of the produce, shipment to the auction houses he already owned, and the final sale to merchants. In 1911, Di Giorgio seized the opportunity to make his vision a reality by purchasing Earl Fruit Company, the dominant packing company in California. 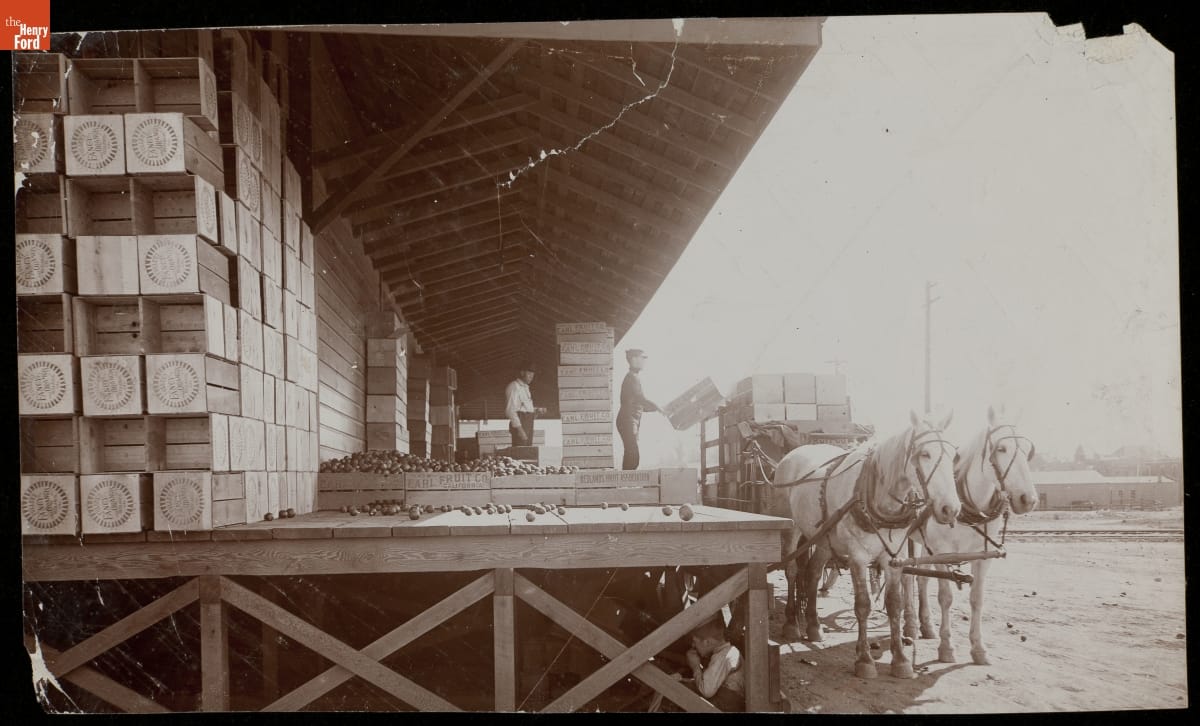 By the time Joseph Di Giorgio purchased the Earl Fruit Company in 1911, it had packing houses in every important fruit center across the state of California. The company shipped its produce across the country to eastern markets by rail and to local markets by horse-drawn wagon. In this photograph, taken in 1905 before Di Giorgio purchased the company, men load crates of oranges bearing the name “Earl Fruit Company” onto wagons heading for market.

With the profits he made through this lucrative acquisition, Di Giorgio was able to expand even further. His first land acquisition came in 1918 when he purchased citrus groves in Florida. The following year, he developed open desert land in California’s San Joaquin Valley, turning it into a thriving oasis for various fruits. By 1920, Joseph Di Giorgio was the leading supplier of California’s deciduous fruit (that is, fruit that grows on vines, trees, and bushes, excluding citrus fruits.) He also owned apple orchards in Oregon and Washington, plum orchards in Idaho which produced prunes, and citrus orchards in Florida that yielded oranges and grapefruit. At this time, Di Giorgio still owned an operation in the banana industry as well, but he abandoned this venture in the 1930s as he turned his focus to his domestic interests. 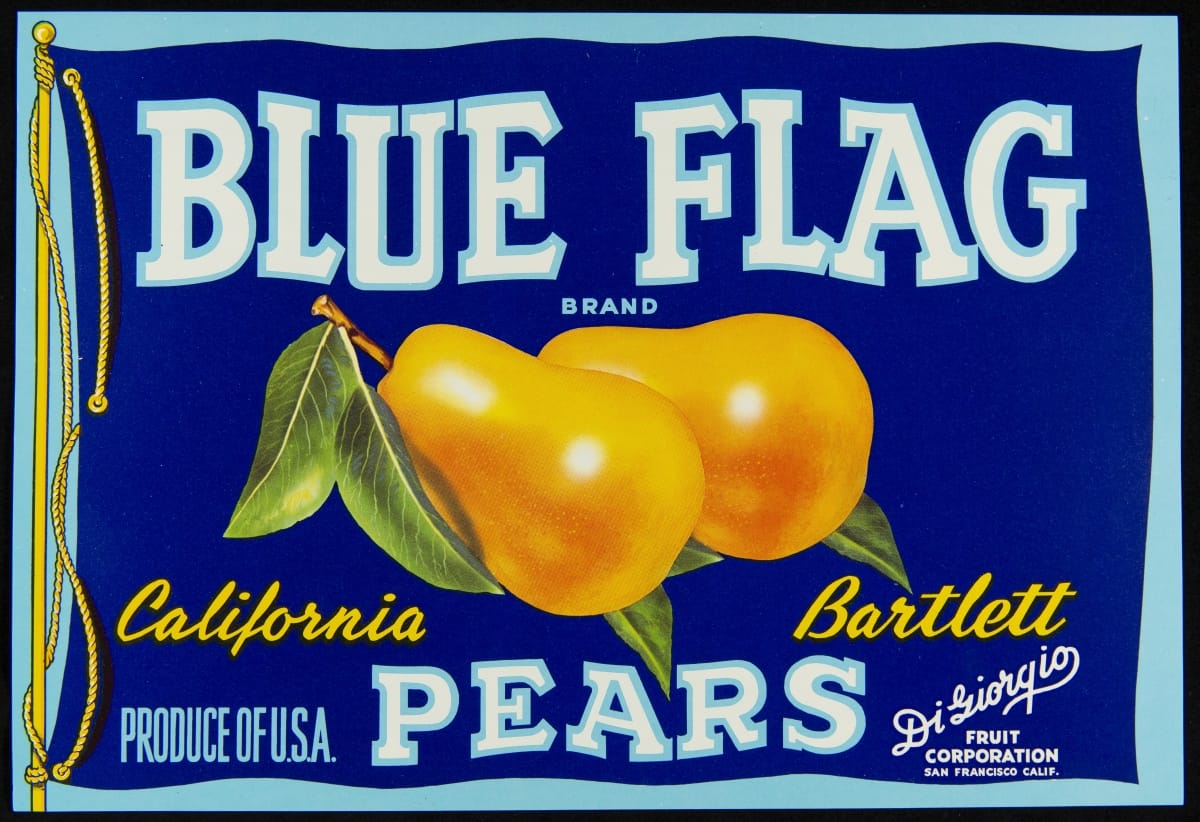 Upon arrival at an auction house, merchants were given a catalogue of the produce available. With so many companies and brands to choose from, it was important for fruit packers to make their products stand out. Companies often adopted a signature image or brand to help loyal customers recognize their products. One of Di Giorgio Fruit Corporation’s widely used brands was Blue Flag Brand, which featured a flag within its label design.

At the time of his death in 1951, Joseph Di Giorgio was at the peak of his career as a grower, and his company was the largest fruit-packing enterprise in the country. The success of his company can be attributed to Di Giorgio’s leadership. His experience in all aspects of the fruit industry allowed him to recognize potential problems and adapt appropriately. A brilliant and personable man, Di Giorgio earned respect and loyalty from employees and clients alike – an aspect of the business Di Giorgio was proud of. But above all, he was confident and dedicated to seeing his vision through, propelling the Di Giorgio Fruit Corporation to national recognition and appropriately earning himself the media-given nickname, the “Fruit King.”