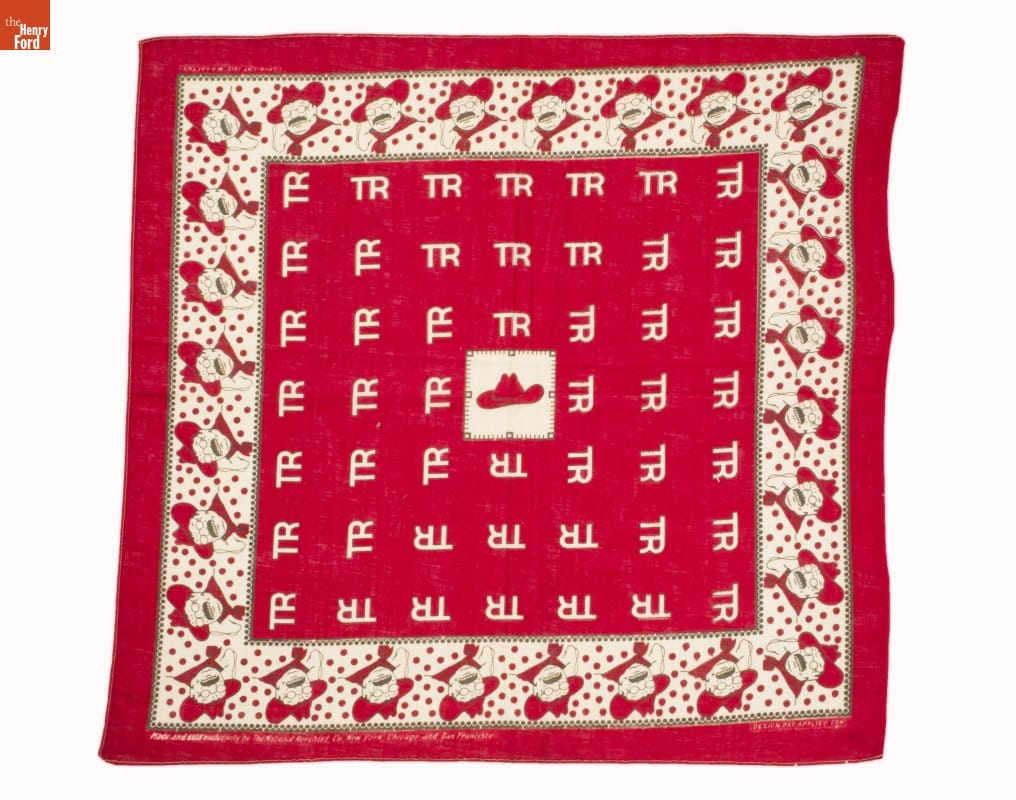 As featured on: The Henry Ford's Innovation Nation

Bandannas have been popular presidential campaign items since at least the 1840s. While wealthy, urban gentlemen sported neatly folded linen or silk handkerchiefs, farmers and blue-collar workers preferred to carry colorful cotton bandannas like this one. They dangled them from the hip pockets of their overalls or the front pockets of their frock coats worn to church on Sunday.  At political parades and rallies, they would whip them out to twirl them by hand or swing them from atop a pole.  They also used them to decorate front porches and even flew them from buggy whips while traveling by horse and carriage.

This bright red bandanna was created by the National Kerchief Company for Theodore Roosevelt’s presidential campaign of 1912. Roosevelt had assumed the Presidency in 1901 after the tragic assassination of President William McKinley and he was re-elected in a landslide in 1904.  But he declared that he was not running for re-election in 1908 and, instead, backed his close friend and Secretary of War, William Howard Taft. Although Roosevelt’s backing helped Taft win the 1908 election, Taft became increasingly conservative and lacked Roosevelt’s energy, personal magnetism, and public support. Roosevelt’s own disenchantment with Taft finally convinced him to oppose him in the 1912 election. When Republican Party leaders decided to nominate Taft, Roosevelt organized his own party—the Progressive Party.

The rich imagery on this bandanna was intended to be an emotional appeal to voters, reminding them of how much Roosevelt had endeared himself to them a decade ago.  First, the hat in the center of the bandanna symbolizes Roosevelt’s decision to run for President after a hiatus of four years, by proclaiming “My hat is in the ring.”  But this is not just any hat.  It is a slouch hat, a wide-brimmed felt hat that was commonly worn by the U.S. military since the Civil War and was still popular among cowboys and other Westerners.  One side of the brim was often pinned up, allowing wearers to sling a rifle over their shoulder.  This, in fact, was the type of hat that Roosevelt had made famous as he heroically led the Rough Riders during the Spanish-American War in 1898.

Teddy Roosevelt’s initials printed around the outside of the hat were designed to look like a cattle brand, evoking Roosevelt’s ranching years in the Dakota Territory during the 1880s.  During that time, he developed a love for the West, for cowboy life, for vigorous exercise, and for nature—all passions he brought to the White House and instilled in the American public during his Presidency.

Around the outer edge of the bandanna appears the caricatured image of Roosevelt himself, immediately recognizable through the slouch hat, spectacles, and mustache.  The bandanna he is wearing was also a part of his Rough Rider uniform.  Bandannas, in fact, became an iconic part of every Rough Rider’s uniform, popularized by the Western cowboys who joined Roosevelt’s volunteer cavalry and then embraced by everyone—even the high-falutin’ Eastern college men and intellectuals who were Roosevelt’s friends.  Teddy Roosevelt himself had worn a blue bandanna with white polka dots with his custom-made khaki Rough Rider uniform.  This likely accounts for the polka-dot background on the bandanna’s outer edge.

When Roosevelt joined the 1912 Presidential race, his run for re-election would prove to be the most impressive and exciting third party candidacy in American political history.  In the end, however, the Roosevelt-Taft split in Republican votes opened the door for Democrat Woodrow Wilson to win the election.

A bandanna full of symbols, in itself a symbol of Teddy Roosevelt—the Rough Rider, the hero, the cowboy, the everyman.  It is a wonderful example of an object whose symbolic references people understood at the time and whose playful design can still delight us today.