Trucks Take the Spotlight at the 2018 Old Car Festival 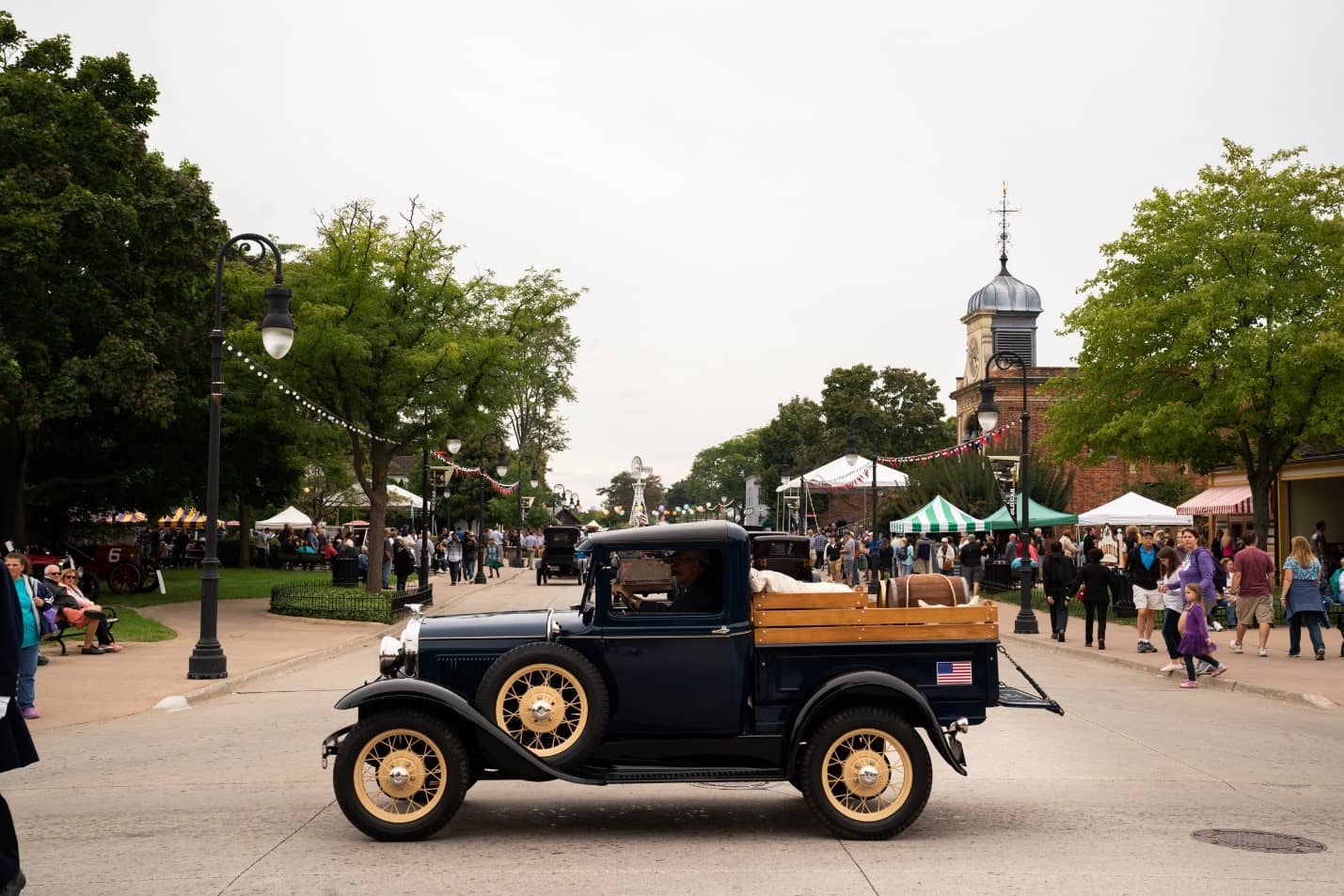 Factory-built trucks, like this 1931 Ford Model A pickup, were the highlight at this year’s Old Car Festival in Greenfield Village.

Another summer car show season has come and gone, but it was capped off in spectacular fashion with the 68th annual Old Car Festival. More than 750 bicycles, automobiles and trucks filled Greenfield Village with the sights and sounds of motoring circa 1900-1932.

This year’s theme commemorated a century of factory-built trucks. Chevrolet introduced its first half-ton and one-ton trucks in 1918. Ford technically built its first Model TT trucks in 1917, but TT production that first year was so small that it seems fair to celebrate the Ford truck centennial in 2018, too. Regular Old Car Festival attendees know that – despite the show’s name – trucks have long been a part of the event, but this year the spotlight was theirs. In addition to the many participant trucks, our friends at the GM Heritage Center kindly provided a 1926 Chevrolet Superior Series X pickup for display, while we pulled out a 1925 Ford Model TT stake truck from The Henry Ford’s collection. 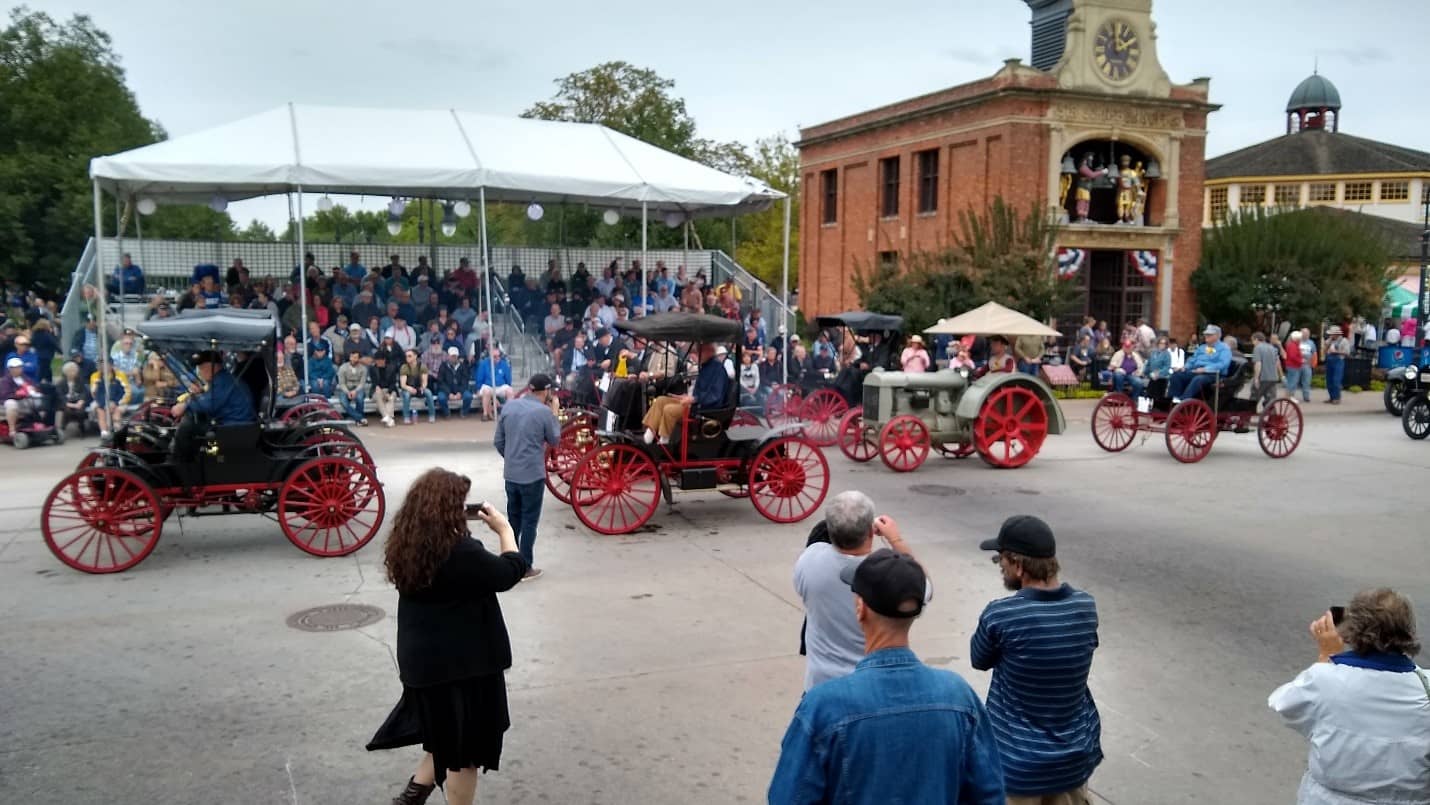 A group of eight Sears high wheelers heads through Pass-in-Review – with the non-runner towed by a 1921 Fordson Model F tractor.

Old Car Festival always brings together a mix of the rare and the common, the strange and the standard, and this year was no exception. Among the highlights was a group of eight Sears high wheelers. From 1909 to 1912, aspiring motorists could order complete cars (along with just about everything else) from the Sears catalog. Priced around $400, the cars were solid if not spectacular, but their arrival was something of a cultural milestone. If *Sears* was selling them, then surely these horseless carriages were here to stay! 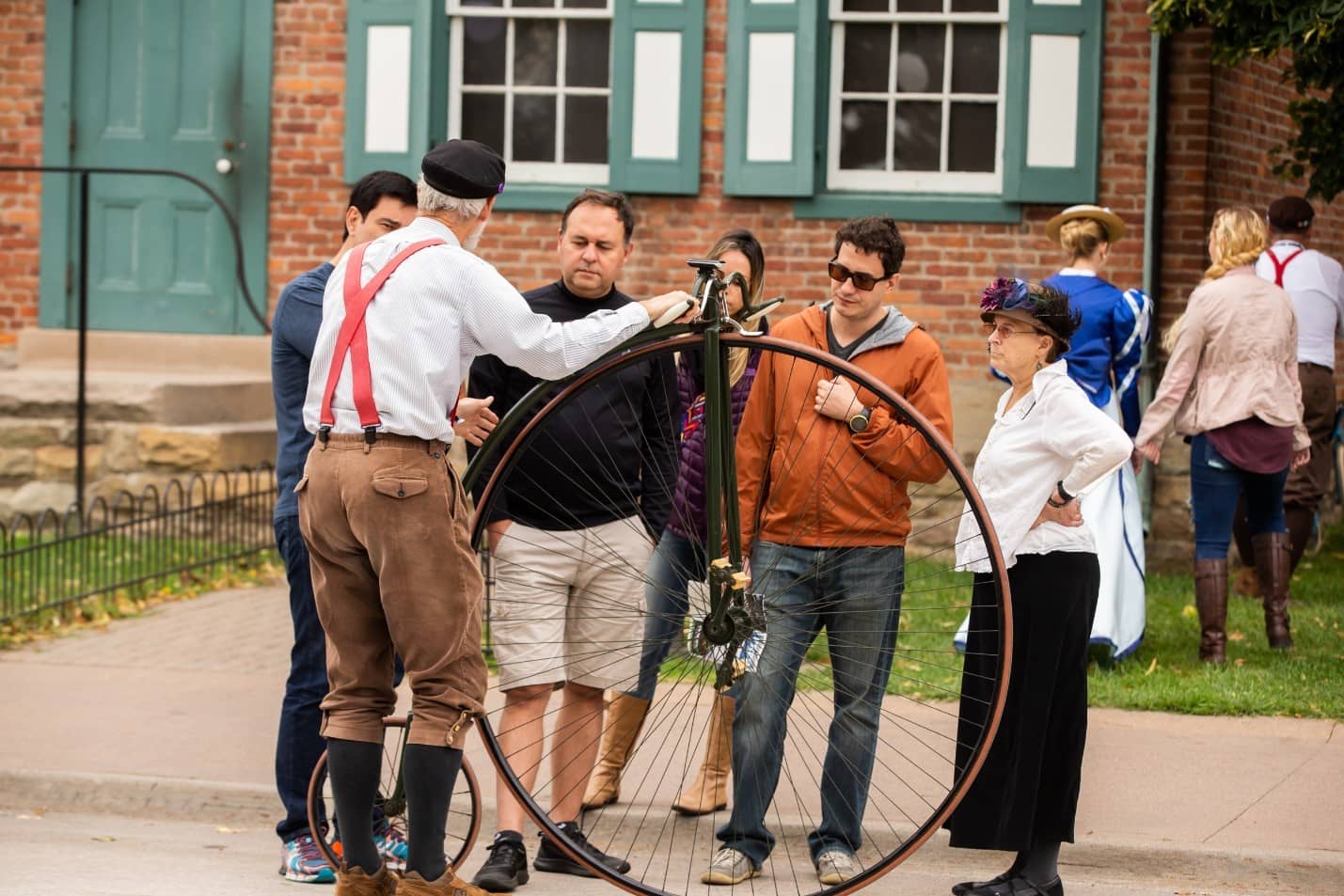 Even 130 years after “safety” bicycles supplanted them, high-wheel “ordinary” bikes continue to fascinate.

Not every vehicle at Old Car Festival had a motor. Once again members of the Michigan Wheelmen brought a variety of period bicycles, from a replica of a circa 1817 draisine (the bicycle’s earliest, peddle-less ancestor), to intimidating high wheelers of the 1870s, to more conventional “safety” bikes of the sort Wilbur and Orville Wright sold in the 1890s. Throughout the weekend, the Wheelmen wowed the crowds with their displays of skill – from bicycle games, to stunts, to simply managing to climb aboard something with a front wheel 58 inches high. 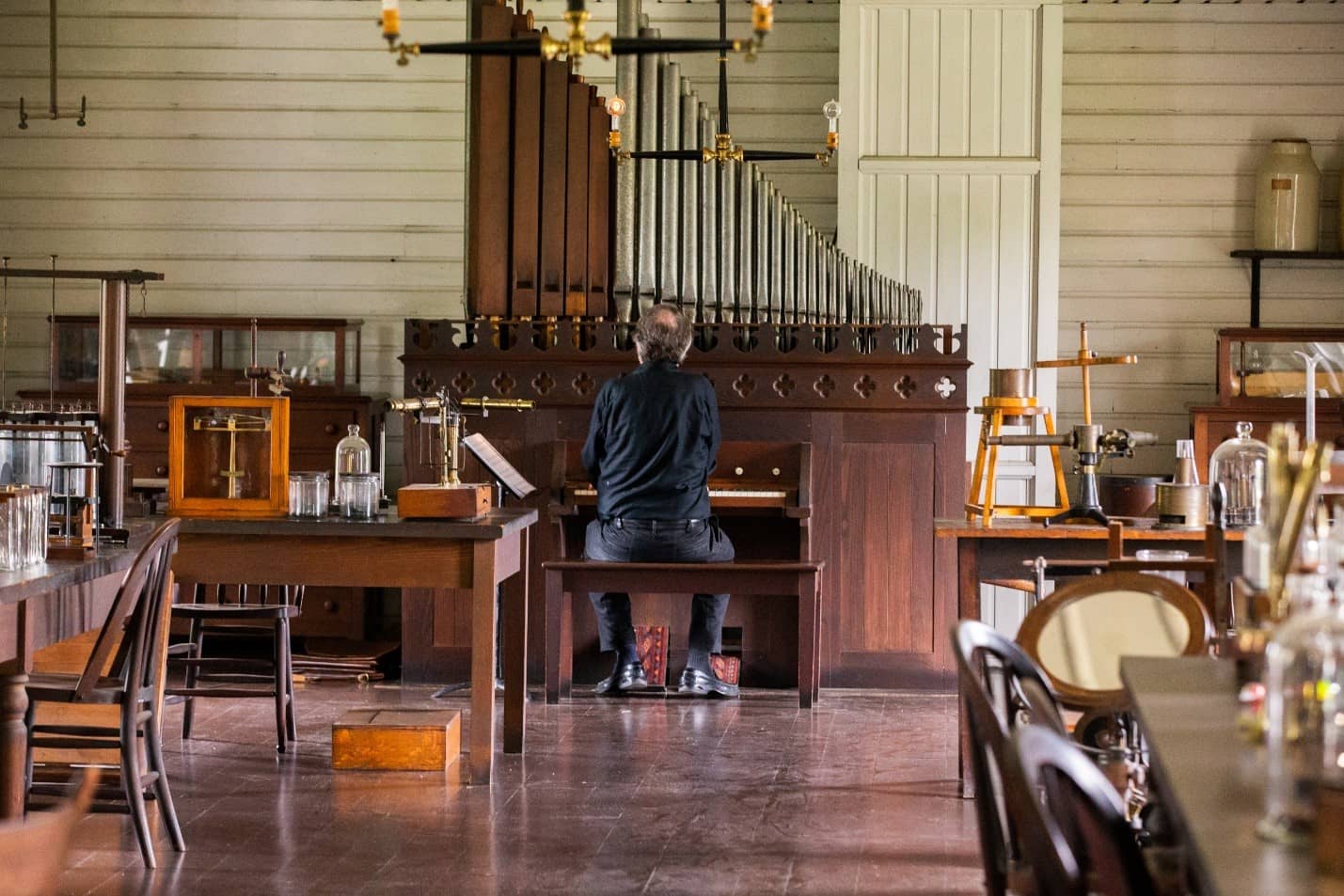 Visitors enjoyed an additional musical treat this year as organist Dave Wagner performed hit songs of the early automobile era on the newly-restored pipe organ in the Menlo Park Laboratory.

Our decade vignettes, so popular last year, returned for 2018. For the Aughts, we had a group of Civil War veterans enjoying a G.A.R. reunion picnic (with a period-appropriate blend of horse-drawn and motorized transportation). For the 1910s, we had a Ragtime street fair complete with fast-fingered pianists, vintage games, and tasty foods along Washington Boulevard. At the other end of the village near Cotswold Cottage – “over there,” if you will – a group of World War I reenactors commemorated the centennial of the Armistice. The Roaring ’20s were recalled with a concert and dancing at the bandstand near the Ackley Covered Bridge. And the somber early years of the Great Depression came to life through the blues guitar of the Rev. Robert Jones. 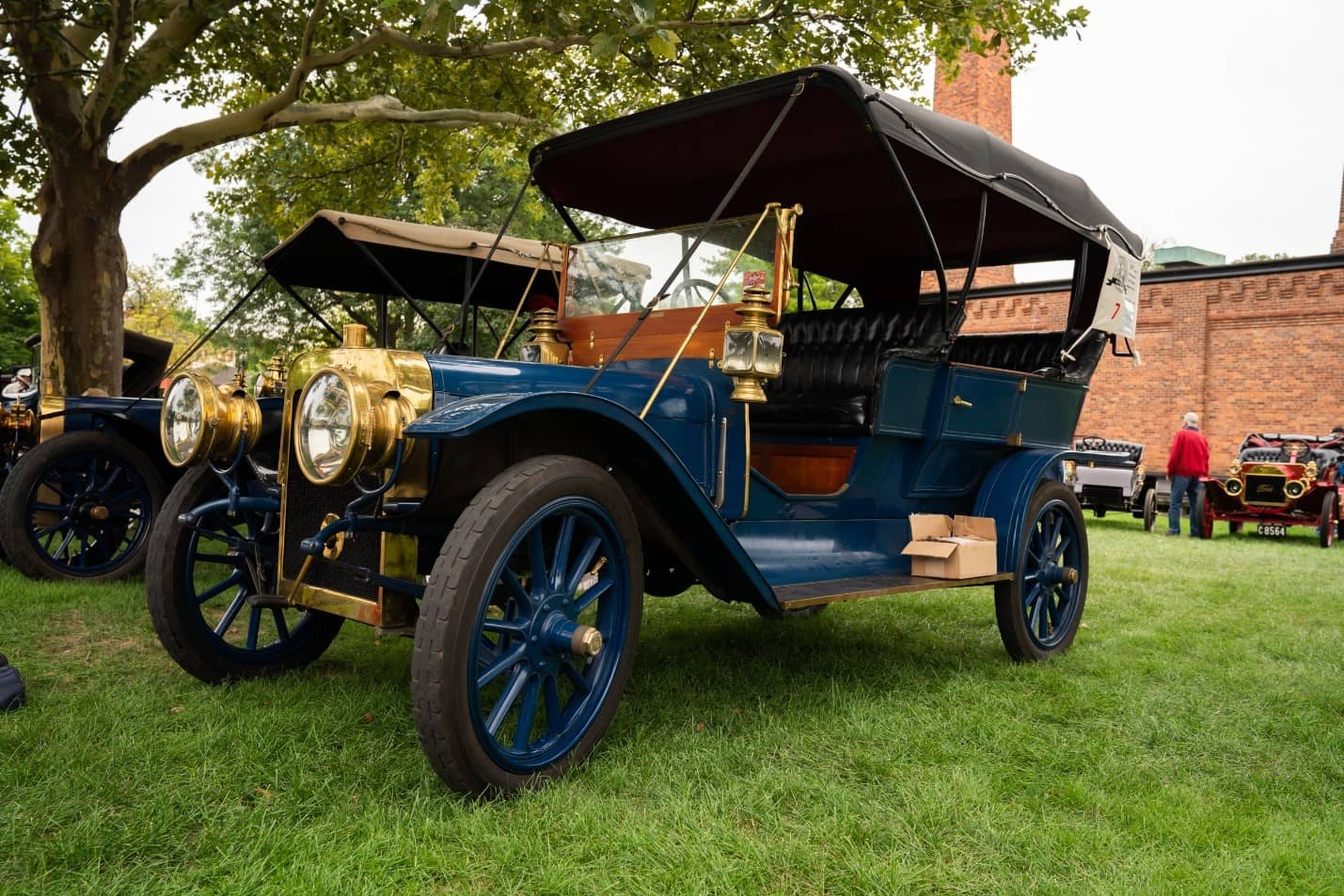 Another rare sight: five Model K Fords attended the show. Today the big six-cylinder K is unfairly dismissed as a failure. In truth, it sold well – and quite profitably – between 1906 and 1908.

Whether it was your first visit or your 21st, Old Car Festival surely offered something to bring a smile to your face or a tap to your toe. It’s a car show like no other, and one we’ve been proud to present year after year.