Walt Disney spent years imagining his ground-breaking entertainment venue, Disneyland, before it opened in 1955. Disney found inspiration for this remarkable theme park from many people and places.

Walt Disney (1901–1966) spent his most memorable childhood years in Marceline, Missouri, leaving him with a great fondness for small town America. Disney's early passion for cartoon drawing and humor blossomed in 1928 with his first major success, the Mickey Mouse animated cartoon character. By the 1930s, Disney headed a thriving motion picture studio making animated cartoons and live action movies. He explained his interest in developing a theme park to his biographer, Bob Thomas:

“It all started when my daughters were very young, and I took them to amusement parks on Sunday. I sat on a bench eating peanuts and looking around me. I said to myself, why can't there be a better place to take your children, where you can have fun together? Well, it took me about fifteen years to develop the idea.”

While on business trips and family vacations, Disney visited not only amusement parks, but also fairs, expositions, tourist attractions, and zoos to further his vision of creating an extraordinary family leisure experience. One of these places was Greenfield Village, which Walt Disney visited several times during the 1940s. 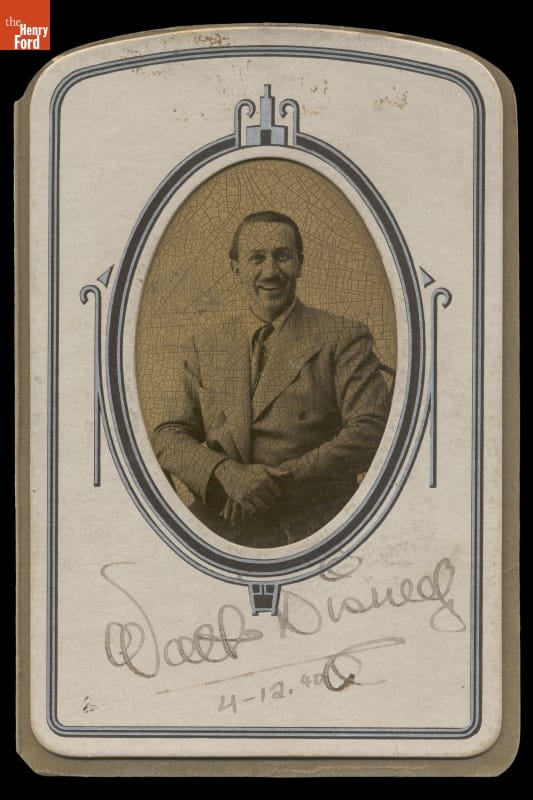 “Walt Disney, creator of the world-famous movie character, Mickey Mouse, visited the Village and Museum today. He showed great interest in everything mechanical, examining engines and old autos closely. He had a good time with Mr. Tremear while posing for a tin-type. In the Museum Theater he spoke for a few moments to the school children. He was accompanied by Mrs. Disney, and by Ben Sharpsteen, his chief animator. Wm B. Stout was his host.” 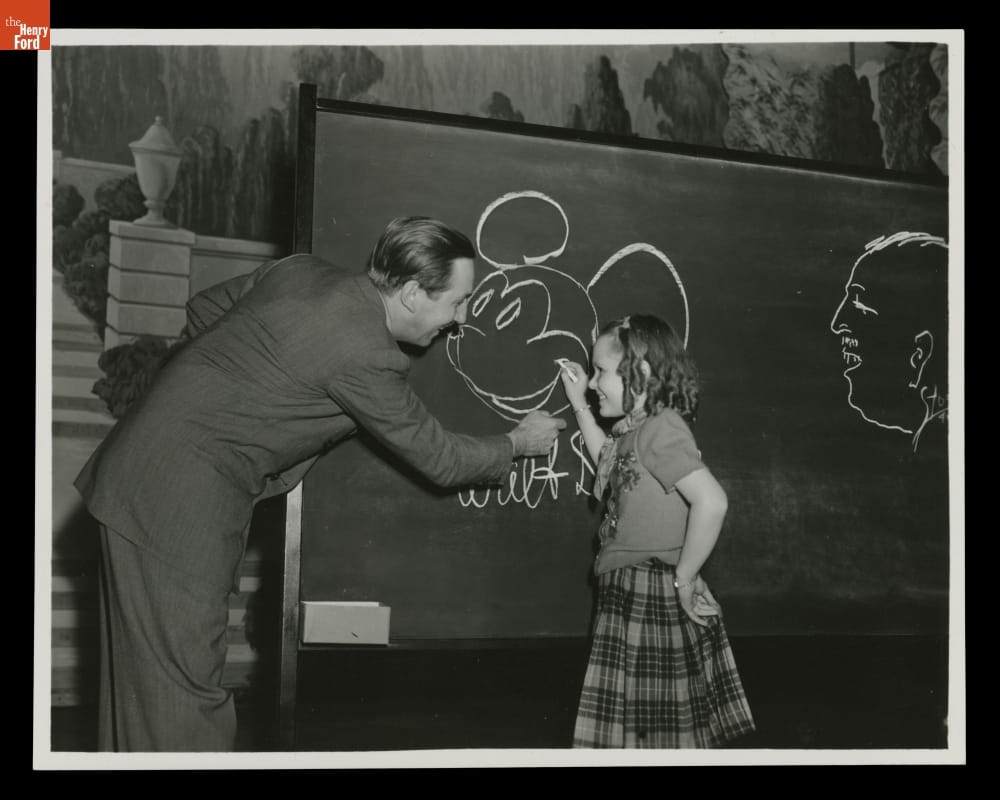 During Disney's tour, he stopped at the Tintype Studio to pose for photographer Charles Tremear, autographing one of his tintypes for display there. Disney also spent a few minutes talking with students from the Greenfield Village Schools, who had gathered in the museum's theater to greet him. (Henry Ford established a school system in his museum and village complex several years before his historical enterprise was formally opened to the public in 1933.) Ford Motor Company photographer George Ebling—who was often asked to take personal photographs for Henry Ford—captured images of Disney's delightful visit with the students.

On August 20, 1943, Disney again visited Henry Ford Museum. He; his wife, Lillian; and their daughter, Diane, posed for photographs with examples of some of the historical modes of transportation displayed there. Disney’s joyful, childlike expression embodies the experience he hoped to create for families visiting what would come to be Disneyland.

Walt Disney came back to Greenfield Village five years later, on August 23, 1948. Disney and one of his animators, Ward Kimball—who shared Disney's longtime fascination with railroads—had traveled to Chicago to attend the Railroad Fair. They decided to take a side trip to Greenfield Village. During the visit to Greenfield Village, Disney once again made a stop at the Tintype Studio, where he and Kimball were photographed by tintypist Charles Tremear. 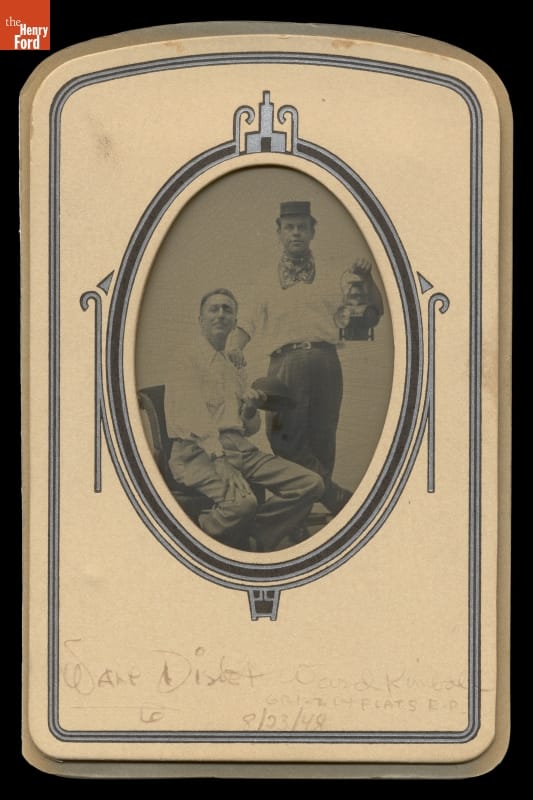 By the late 1940s, Disney's ideas for a themed entertainment park had progressed substantially. On the train ride back to California, he shared his ideas with Kimball, then summarized them in a memo dated August 31, 1948. An excerpt of this memo seems to echo aspects of Greenfield Village: “The Main Village, which includes the Railroad Station, is built around a village green or informal park … Around the park will be built the town. At one end will be the Railroad Station; at the other end, the Town Hall…”

When Disneyland opened in Anaheim, California, in 1955, it quickly captured the public’s imagination. In his innovative theme park, Walt Disney drew inspiration from his many interests and experiences to create an entirely new kind of family entertainment. To learn more, check out this blog post!


This post by Cynthia Read Miller, former Curator of Photography and Prints at The Henry Ford, originally ran in September 2005 as part of our Pic of the Month series. It was reformatted for the blog by Saige Jedele, Associate Curator, Digital Content, at The Henry Ford.