Weathervanes have helped humans for millennia. In ancient cities, streamers or pennants mounted at high points communicated wind patterns to watchers below. In more recent centuries, weathervanes in the form we might recognize today perched atop high structures, pointing into the wind to reveal its precise direction. These devices heralded weather changes by indicating shifts in prevailing winds—essential information for farmers or mariners whose businesses depended entirely on the weather.

Weathervanes of this type rotated freely, in perfect balance, with weight distributed across a longer “tail” end that was pushed by the wind, and a shorter “arrow” end that pointed in the direction from which it blew. Starting with this basic form, tradesmen and commercial manufacturers created a vast array of weathervane ornaments by the late nineteenth century. These could communicate more than practical information about the wind. A weathervane might represent regional identity or personal interests, convey religious or political symbolism, or advertise goods or services. 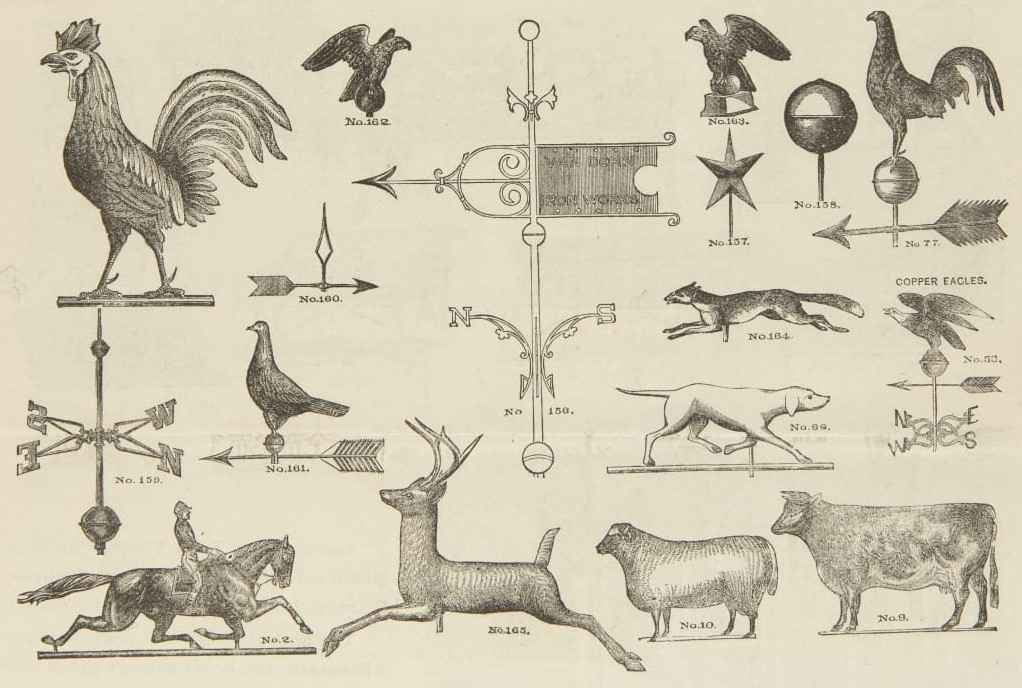 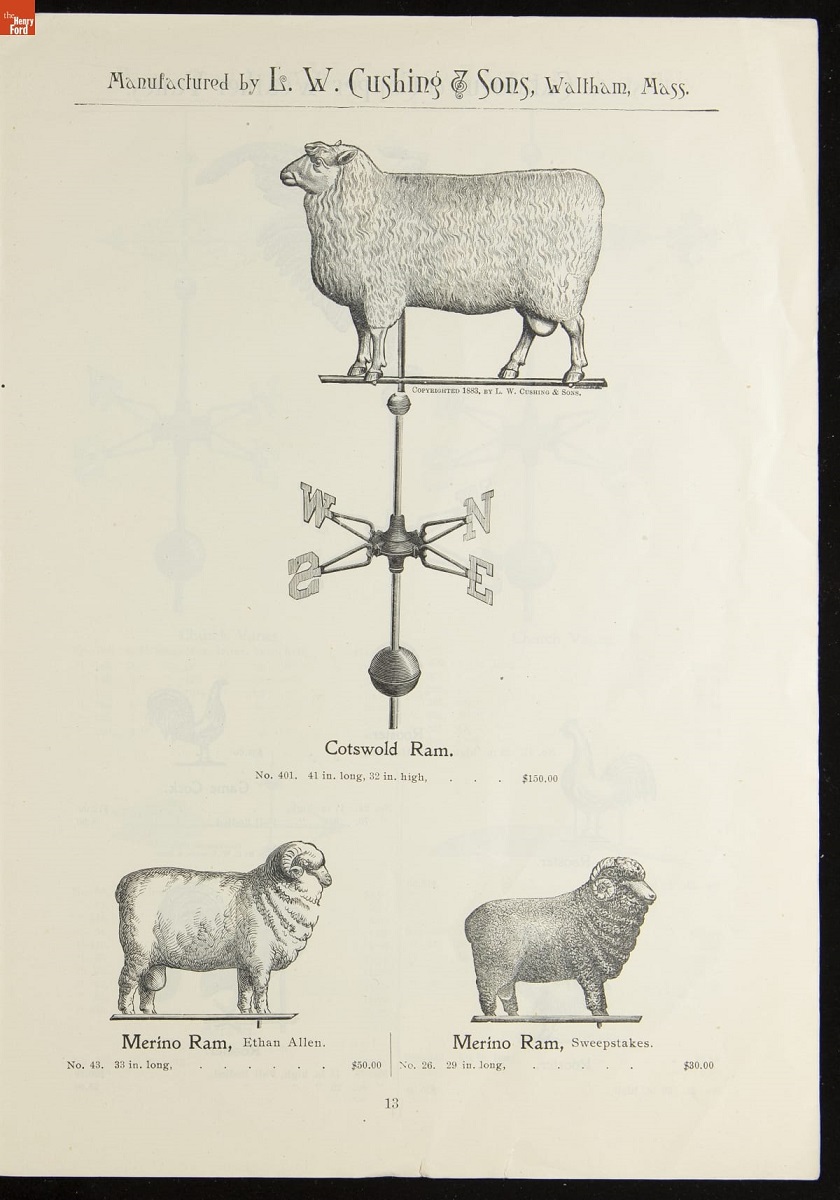 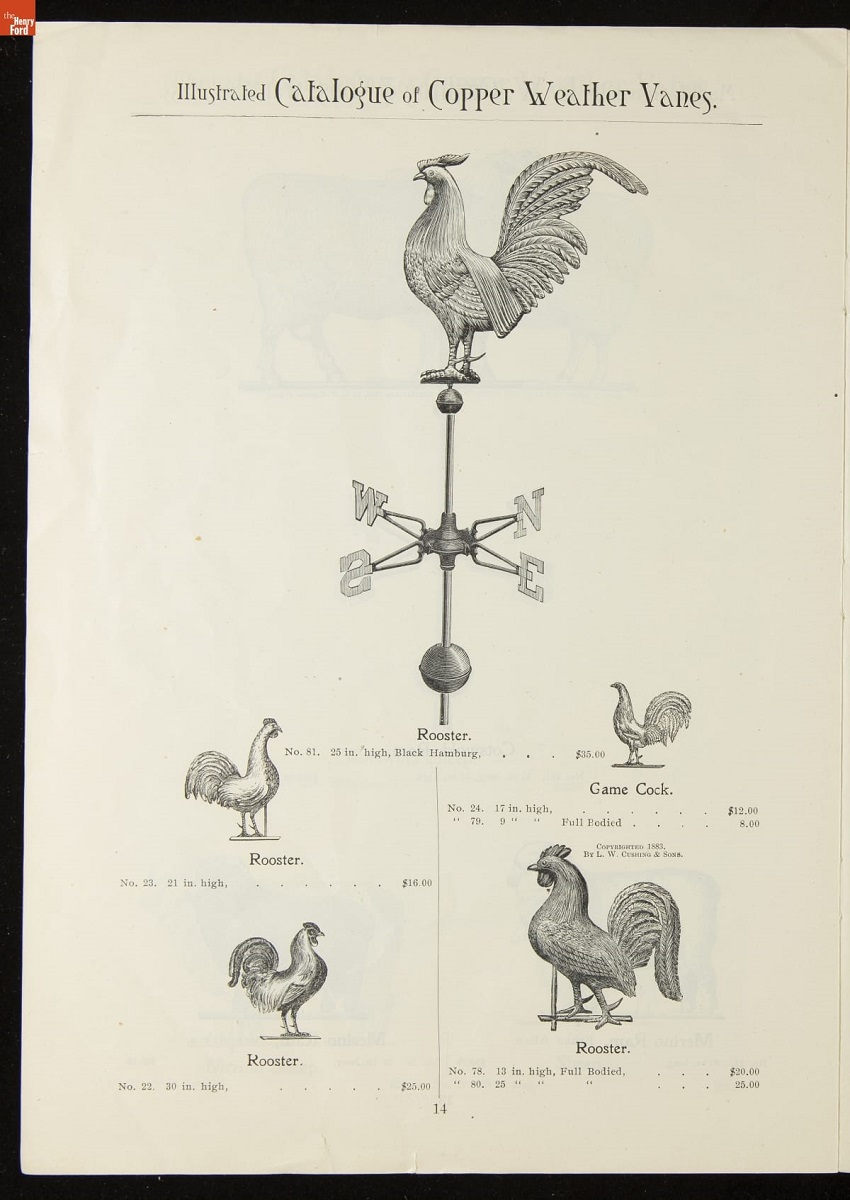 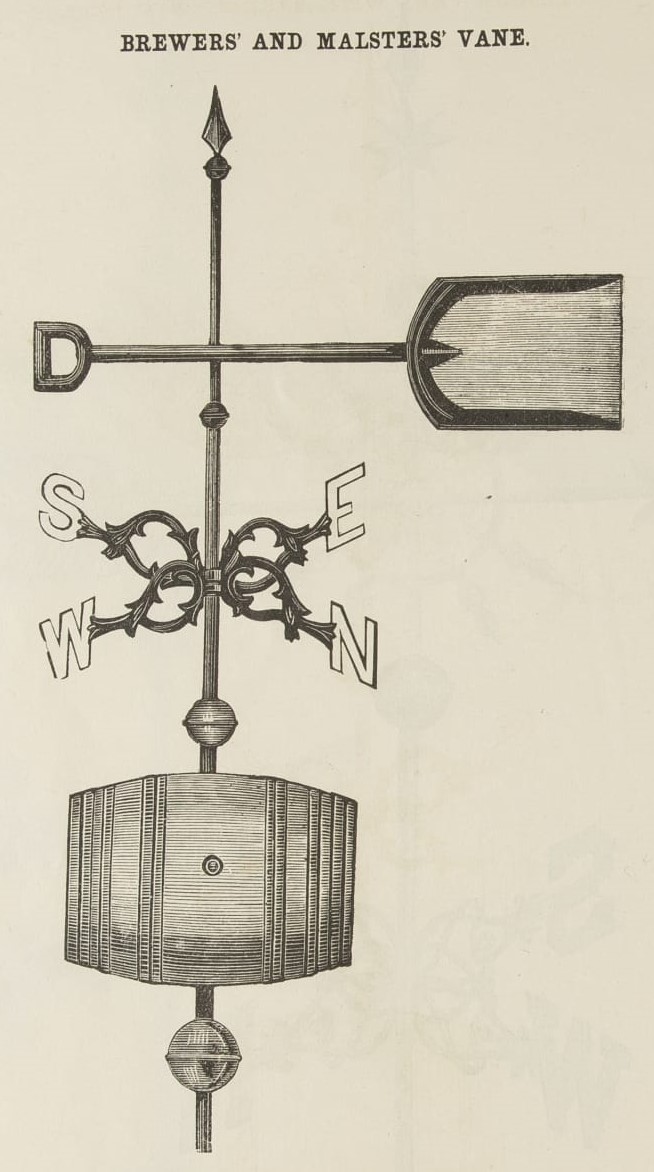 Specialty weathervanes, like this one depicting a malt shovel and beer barrel, doubled as trade advertisements. / THF622201 (detail)

The United States Weather Bureau began generating weather reports based on data collected from across the country in the late 1800s, precipitating the decline of traditional weathervanes. When radio stations began broadcasting national weather reports in 1921, weathervanes became functionally obsolete for most Americans. Nevertheless, weathervanes remained popular. Collectors celebrated them as remarkable examples of American folk art, and twentieth-century manufacturers continued to produce them as nostalgic ornaments for suburban homeowners.

Supplanted by national weather reporting in the early twentieth century, weathervanes like these became the special interest of folk art collectors. / THF186724, THF186720, THF145466, and THF186729 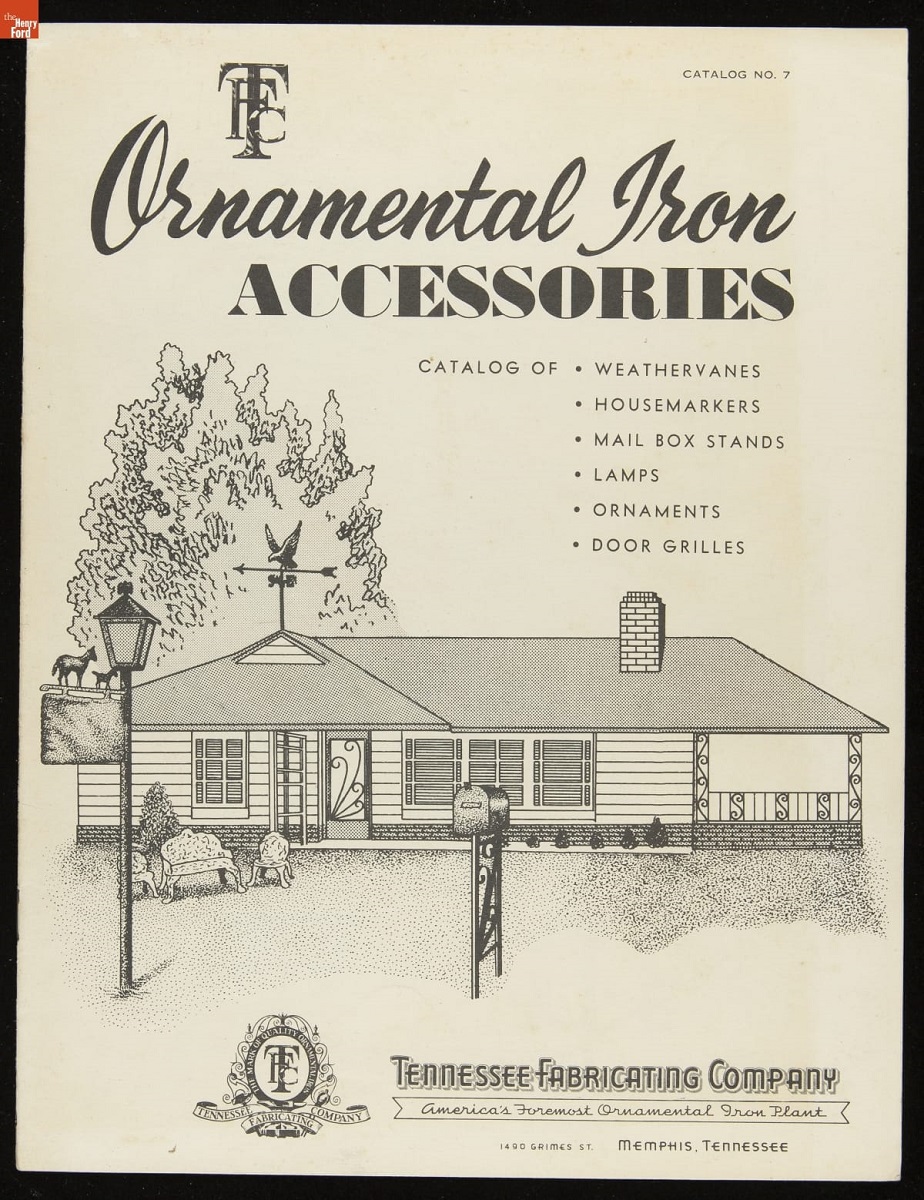 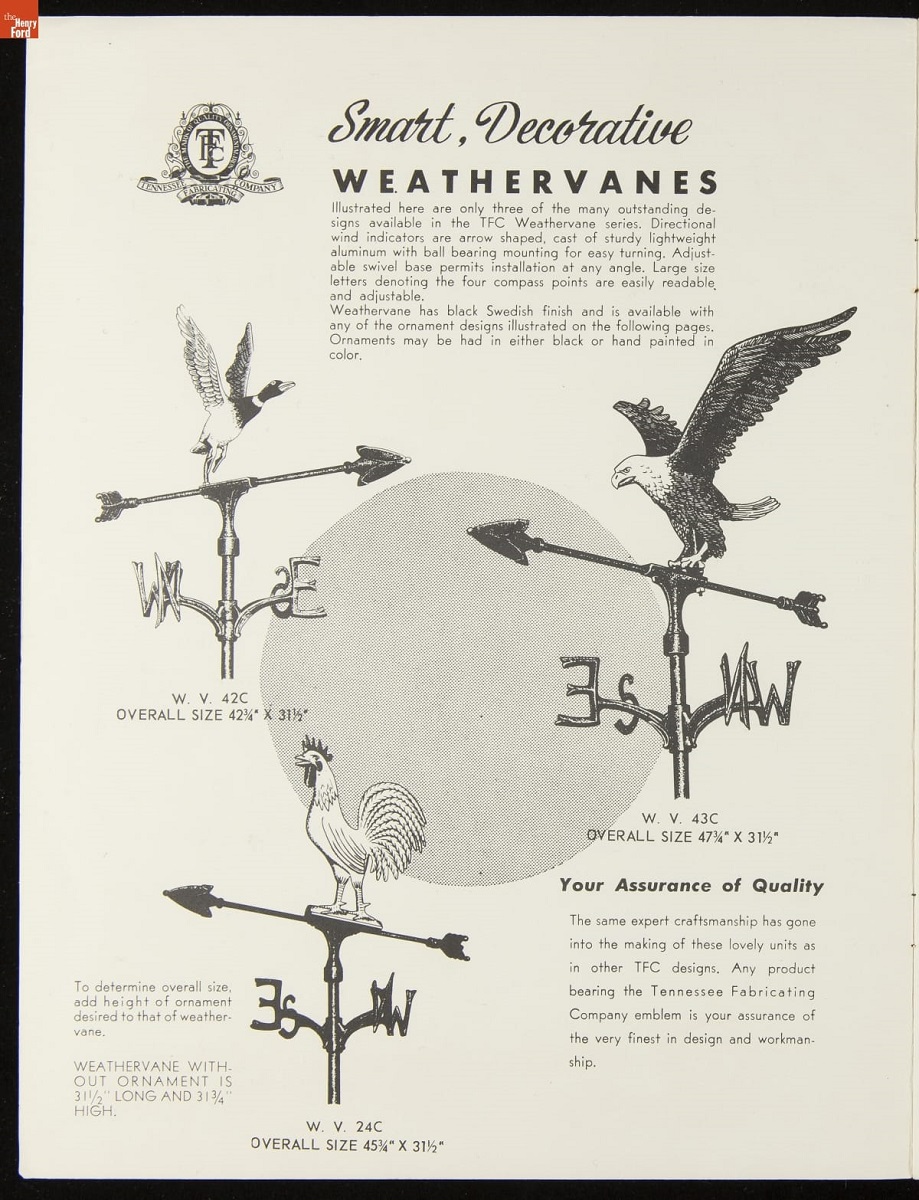 By the mid-twentieth century, most weathervanes were strictly ornamental, as illustrated by this 1959 catalog. / THF622033 and THF622034

In updated forms, weathervanes remain important weathercasting tools. As instant indicators of prevailing winds, they are particularly useful at airports, marinas, and sporting events. And meteorologists still rely on weathervanes—often in combination with anemometers, which measure the speed of the wind, as “aerovanes”—to gather data that documents and helps predict weather patterns.

Weathervanes provide evidence of age-old efforts to identify patterns in natural phenomena and predict changes that might affect human survival. These utilitarian artifacts are mostly understood today as whimsical adornments (Hallmark has even released weathervane Christmas ornaments!) only because most Americans have little to no training in meteorology. Yet, weathervanes remain essential weathercasting devices. They can also aid citizen scientists intent on recording climate change locally and globally.

The next time you visit The Henry Ford, look up as you walk around the museum and village to spot weathervanes atop spires and towers. Note how they point into the wind and shift as the breezes blow. In the meantime, you can browse a selection of weathervanes and trade catalogs from weathervane manufacturers in our Digital Collections.


Debra Reid is Curator of Agriculture & the Environment and Saige Jedele is Associate Curator, Digital Content, at The Henry Ford.