Peggy Ann Mack was an early industrial designer, an author, an artist, and a woman who persisted despite the roadblocks of gender-based discrimination. She is known today primarily for her association with Gilbert Rohde, the famed designer who helped to modernize the Herman Miller Furniture Company in the 1930s. Peggy Ann Mack was Gilbert Rohde’s student, employee, collaborator, his wife, and, just a few years later, his widow. In a pamphlet published by Herman Miller in 1942, Peggy Ann Mack’s name is listed on the cover, with credit for the pamphlet’s “delineation” or illustration. Until recently, these scant details summed up what was known about her life and work, but recent research has revealed a fuller picture of who Peggy Ann Mack was, as well as surfaced some of the many things she accomplished. 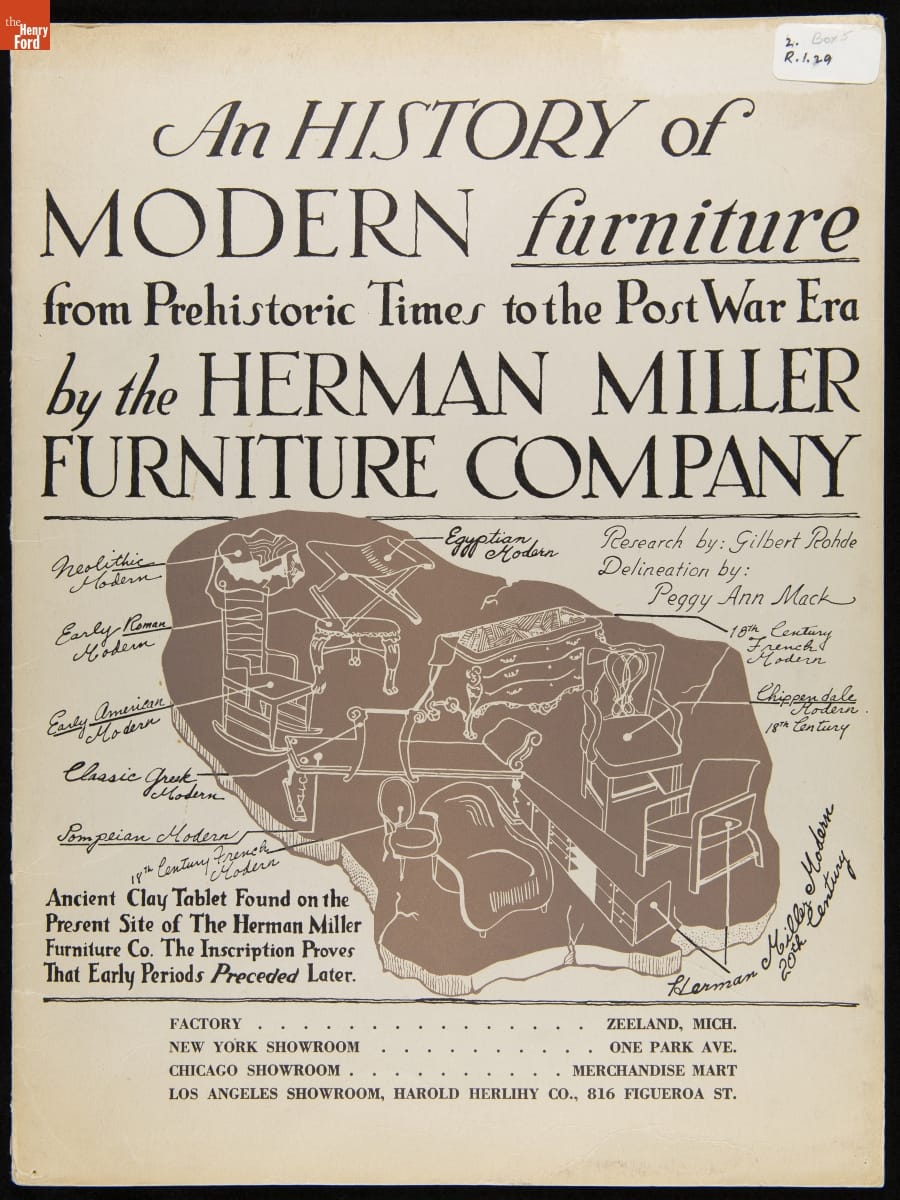 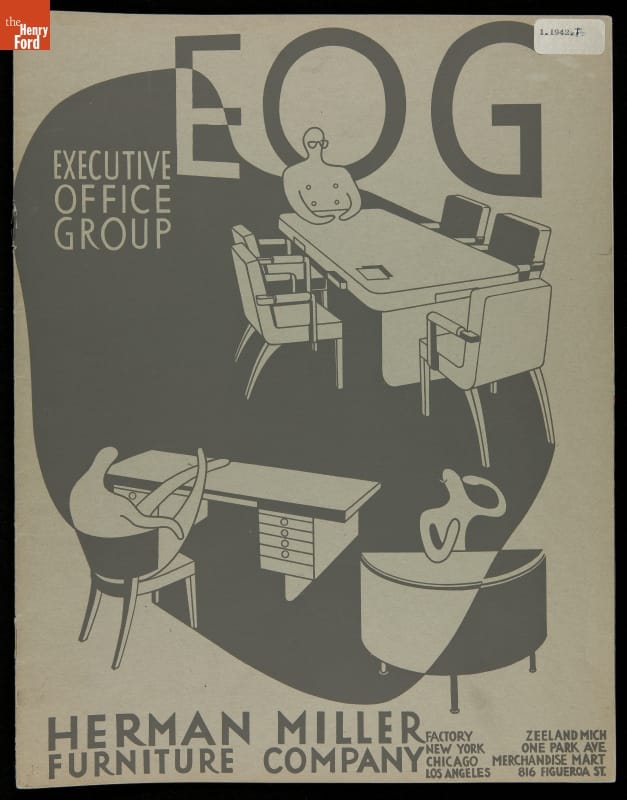 Peggy Ann Mack illustrated both of these publications for Herman Miller Furniture Company. She is credited on the “An History…” pamphlet—the middle of the page reads, “Delineation by: Peggy Ann Mack.” / THF626879, THF229445

Peggy Ann Mack was born Margaret Ann Cecelia Kruelski on May 11, 1911, to Anthony and Frances (Krupinska) Kruelski. She grew up as the eldest of six children in the Bedford-Stuyvesant Heights neighborhood of Brooklyn, New York. Her parents were Polish immigrants and her father Anthony’s occupation was “decorator,” according to census records. He was also an artist who specialized in gilding—or gold leaf application—on bottles and small objects, even on store windows. Peggy, as she preferred to be called, was one in a line of artistically minded members of her family.

Peggy Ann Mack went to Pratt Institute and graduated on June 4, 1931, with a diploma in Teacher Training in Fine and Applied Arts. She later attended Columbia University and the art school at Yale University, first serving as a model there. She was a recipient of a travel fellowship through the Kosciuszko Foundation to study at Krakow University in Poland and, while there, traveled and studied Europe’s Modernist art and architecture. A 1940 article reports that “she became so intrigued with the European methods of industrial designing she flatly refused to come home in time to take up her duties. So, there she stayed until her money ran out and, perforce, she had to return.” The “duties” the article refers to were her teaching duties—she was employed as an art and design teacher in New York City’s high schools at the time. A 1945 Interiors magazine article reports that she considered those four years of teaching to be “miserable.” She was increasingly interested in becoming a practicing industrial designer. Peggy Ann Mack often turned to formal education to help guide her and enrolled at the tuition-free Works Progress Administration (WPA) design school headed by Gilbert Rohde and called the Design Laboratory.

Peggy Ann Mack was one of many students who enrolled at the Design Laboratory. By 1936 she was recommended for an apprenticeship at the Gilbert Rohde Office at 22 East 60th Street in New York City and began working there. Rohde had been hired by the Herman Miller Furniture Company of Zeeland, Michigan, in the early 1930s and was hard at work to modernize the company’s furniture. The Rohde Office also did work for companies like Heywood-Wakefield, Troy Sunshade, and Modernage Furniture Company, as well as completed quite a bit of work for both the 1933–34 Chicago World’s Fair and the 1939–1940 New York World’s Fair. It is likely that Peggy Ann Mack did a bit of everything in the office, but, as was common, staff designer contributions largely went unnoted. She was, however, named in a few instances for her illustrations as well as for murals completed in some of Rohde’s interiors. She also likely had a hand in interior, showroom, and exhibit design for many Rohde Office projects.

At some point in Mack’s time employed by the Gilbert Rohde Office, a romance blossomed. Gilbert Rohde and Peggy Ann Mack married on July 28, 1941, in Santa Fe, New Mexico. The couple did not have children of their own but Gilbert’s sons (from his second marriage to Gladys Vorsanger), Kurt and Lee, got to know Peggy for a short period. Lee Rohde recalls that Gilbert, Lee, and Kurt Rohde drove all the way to New Mexico from New York, ostensibly for a family vacation, and the boys were surprised when Peggy arrived in Santa Fe. Lee Rohde recalled, “We didn’t know—my brother and I—that our trip to New Mexico was more than just a vacation, that it was a wedding trip!”

In 1944, at the age of just 50, Gilbert Rohde suffered a heart attack while he and Peggy ate lunch together at Le Beaujolais, one of their most-frequented restaurants, as it was located directly across the street from the Rohde Office. A few magazines reported Gilbert’s death and pointed to Peggy as the new director in the same breath—one article reported that she “decided to continue his work in industrial design, product development, store modernization and interiors…” Peggy took over the design office, completing already-begun projects and starting new ones. However, certain clients—like Herman Miller—declined to continue the relationship with the Rohde Office after Gilbert’s death because they did not want to work with a woman. The loss of this business must have dealt a double blow to Peggy Ann Mack—both financially and to her spirit. 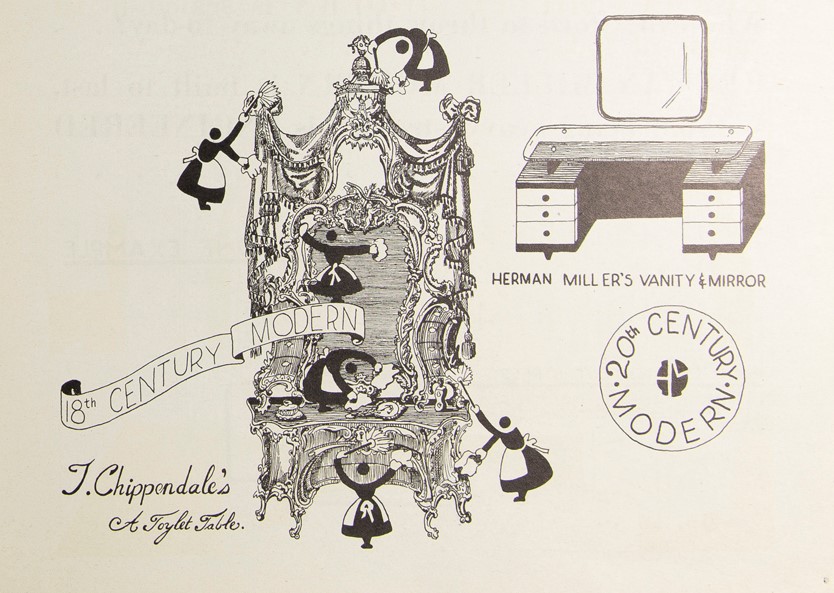 Peggy Ann Mack’s work after Gilbert Rohde’s death is easier to account for than her work while under the auspices of his office, but only just slightly. A few documented commissions include the design of model showrooms for department stores and storefronts. She designed interiors for New London, Connecticut–based Templeton Radio in 1947, as well as a line of radio cases for the company. In 1950, she wrote and illustrated a book, Making Built-In Furniture, using the surname Rohde. Peggy’s signature illustrations fill the book, both to convey information as well as for added flourish. 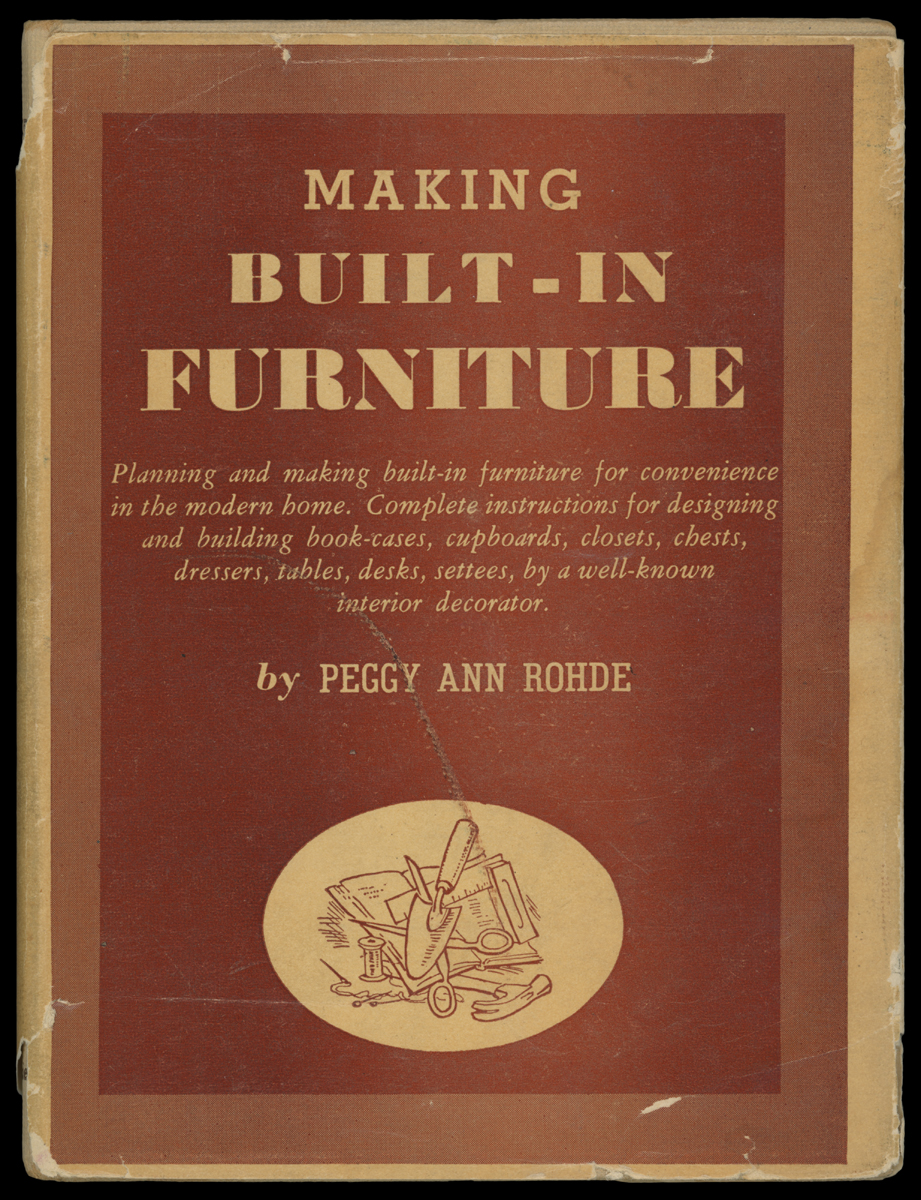 Peggy Ann Mack was an early member of the Society of Industrial Designers (SID). SID was established in February of 1944 and Gilbert Rohde was one of the founding designers, but his name was removed after his death in June of that year, effectively removing record of his involvement as the organization became established. The Industrial Design Society of America (IDSA) reports that SID “membership requirements were stringent, requiring the design of at least three mass-produced products in different industries. SID was formed in part to reinforce the legality of industrial design as a profession, and to restrict membership to experienced professionals.” Peggy Ann Mack was the only female member of SID in its early years, alongside the much better remembered names of designers such as Walter Dorwin Teague, Raymond Loewy, Laszlo Moholy-Nagy, and George Nelson. Her membership certificate, dated November 9, 1945, was signed by SID President Walter Dorwin Teague and Secretary Egmont Arens.

Peggy Ann Mack’s story ends somewhat abruptly. In the early 1950s, Peggy Ann Mack moved to Northern California, where some of her family lived. She died in 1956 in Alameda, California, just days before her 45th birthday. She has been largely forgotten by the design world—a world that was unkind to her as an outspoken woman in its male-dominated club.  She was an impressive and talented woman who continued to find creative avenues to push her design aspirations forward, all the while trying to combat the mounting frustration of doors closing around her due to her gender. Evidence of her life and work continue to evaporate as time marches on, as is unfortunately common for many overlooked women designers from the period. Peggy Ann Mack’s story—and the stories of many other unsung women—is worth uncovering, preserving, and remembering. 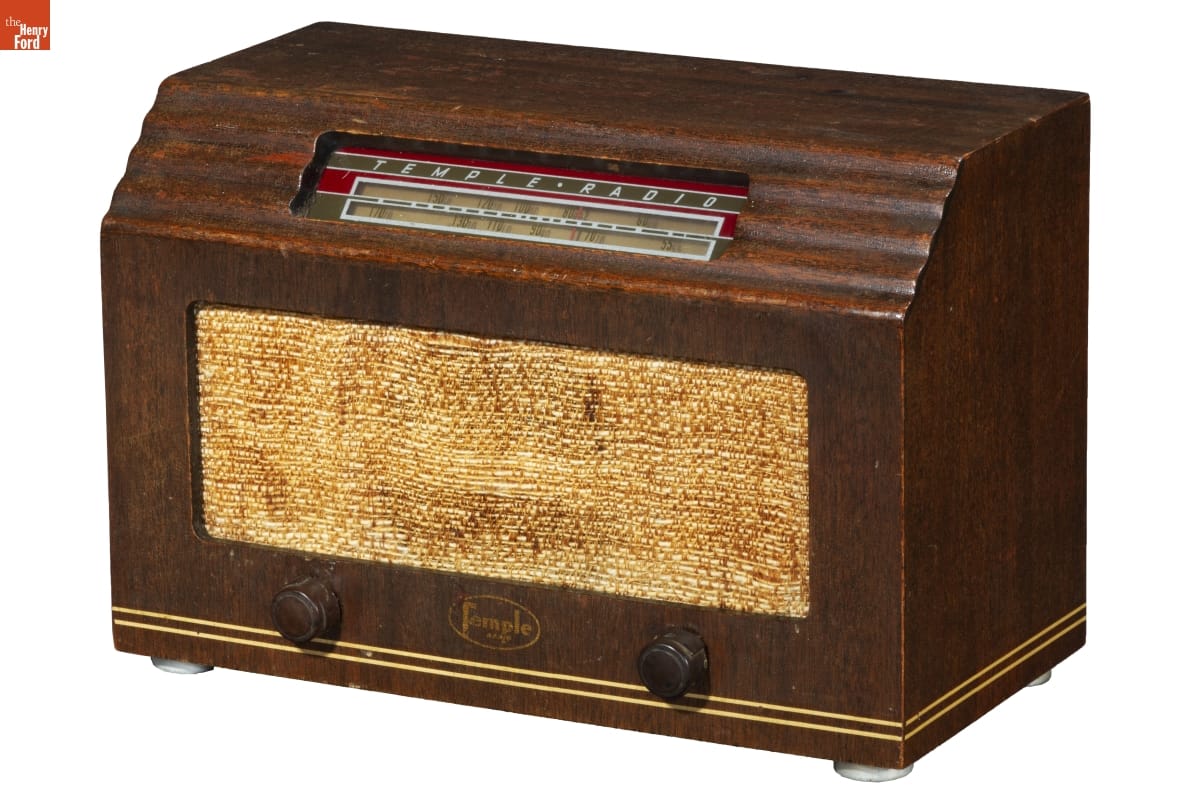 A note on her name: Margaret Kruelski began going by the nickname “Peggy” at least by the time she enrolled at Pratt Institute in 1929. She chose “Peggy Ann Mack” in the mid-1930s. While we don’t know where “Mack” comes from, she reputedly chose to cease using her given surname because people had difficulty saying the Polish “Kruelski.” Even after marrying Gilbert Rohde in 1941 and legally taking the surname “Rohde,” she continued to use the surname “Mack.” However, after Rohde’s death in 1944, she increasingly used the surname “Rohde,” likely to give credence and name recognition to her work. She continued to alternate between “Peggy Ann Rohde” and “Peggy Ann Mack” until her death, even after a second marriage to Basil Durant in 1946. Peggy Ann Mack is used here because it is the name she chose for herself.


Katherine White is Associate Curator at The Henry Ford. Her research on Peggy Ann Mack is ongoing.