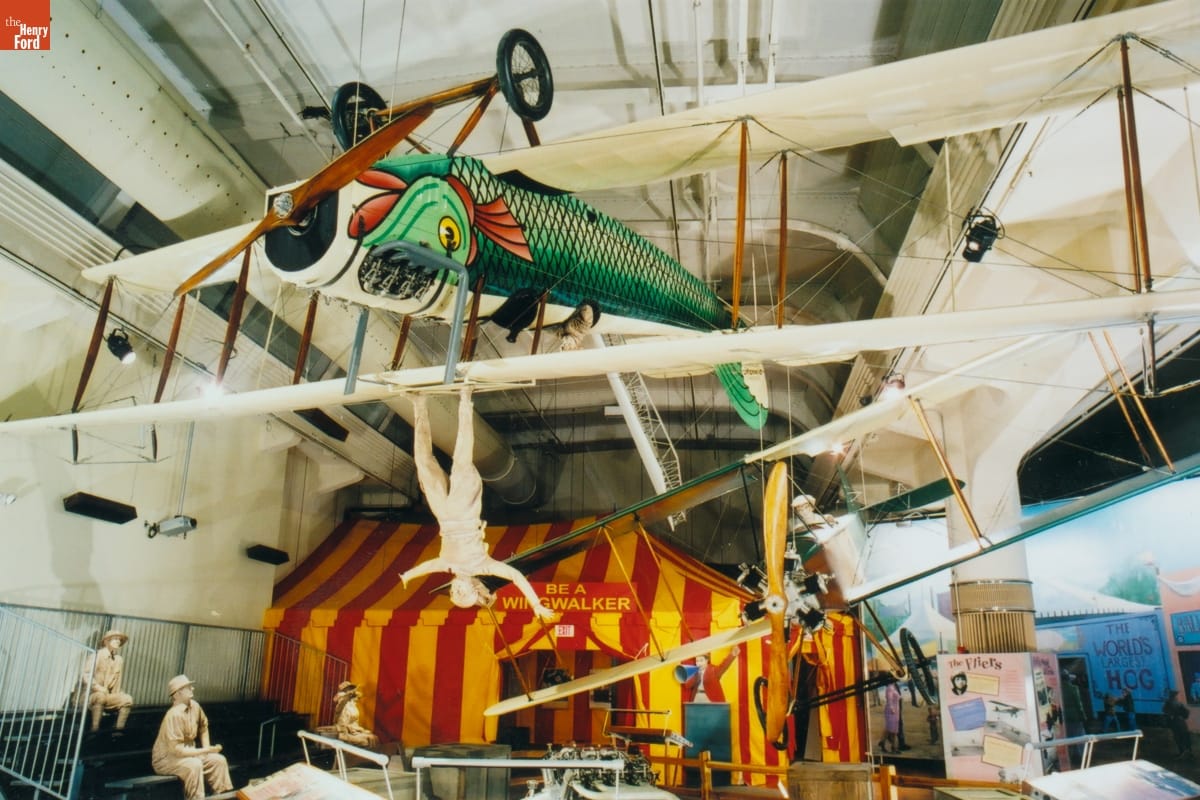 Walk into the barnstormers section of our Heroes of the Sky exhibit and odds are the first airplane to catch your eye will be our 1917 Curtiss JN-4 “Canuck” biplane. Whether it’s the airplane’s inverted attitude, its dangling wing-walker, or its fishy-looking fuselage, there’s a lot to draw your attention. And well there should be. The Curtiss Jenny was among the most significant early American airplanes.

Conceived by British designer Benjamin D. Thomas and built by American aviation entrepreneur Glenn Curtiss, the JN airplanes combined the best elements of Thomas’s earlier Model J and Curtiss’s earlier Model N trainer planes. New variants of the JN were increasingly refined. The fourth in the series, introduced in 1915, was logically designated JN-4. Pilots affectionately nicknamed it the “Jenny.” The inspiration is obvious enough, but even more so if you imagine the formal model name (JN-4) written as many flyers first saw it—with an open-top “4” resembling a “Y.” 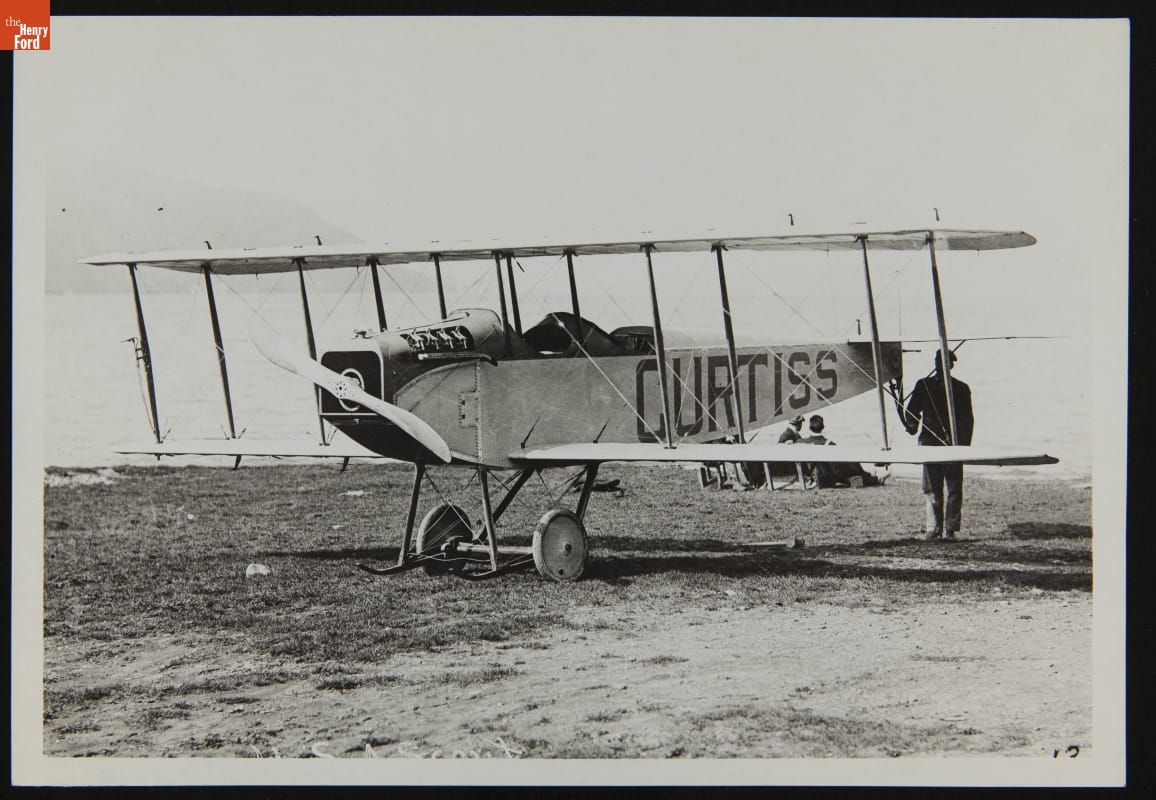 Despite not being a combat aircraft, the Curtiss Jenny became the iconic American airplane of the First World War. Some 6,000 units were built, and nine of every ten U.S. military pilots learned to fly on a Jenny. The model’s low top speed (about 75 mph) and basic but durable construction were ideal for flight instruction. Dual controls in the front and back seats allowed teacher or student to take charge of the craft at any time.

Our JN-4 is one of approximately 1,200 units built under license by Canadian Aeroplanes, Ltd., of Toronto. In a nod to their Canadian origins, these airplanes were nicknamed “Canucks.” While generally resembling American-built Jennys, the Canadian planes have a different shape to the tailfin and rudder, a refined tail skid, and a control stick rather than the wheel used stateside. (The stick became standard on later American-built Jennys.) 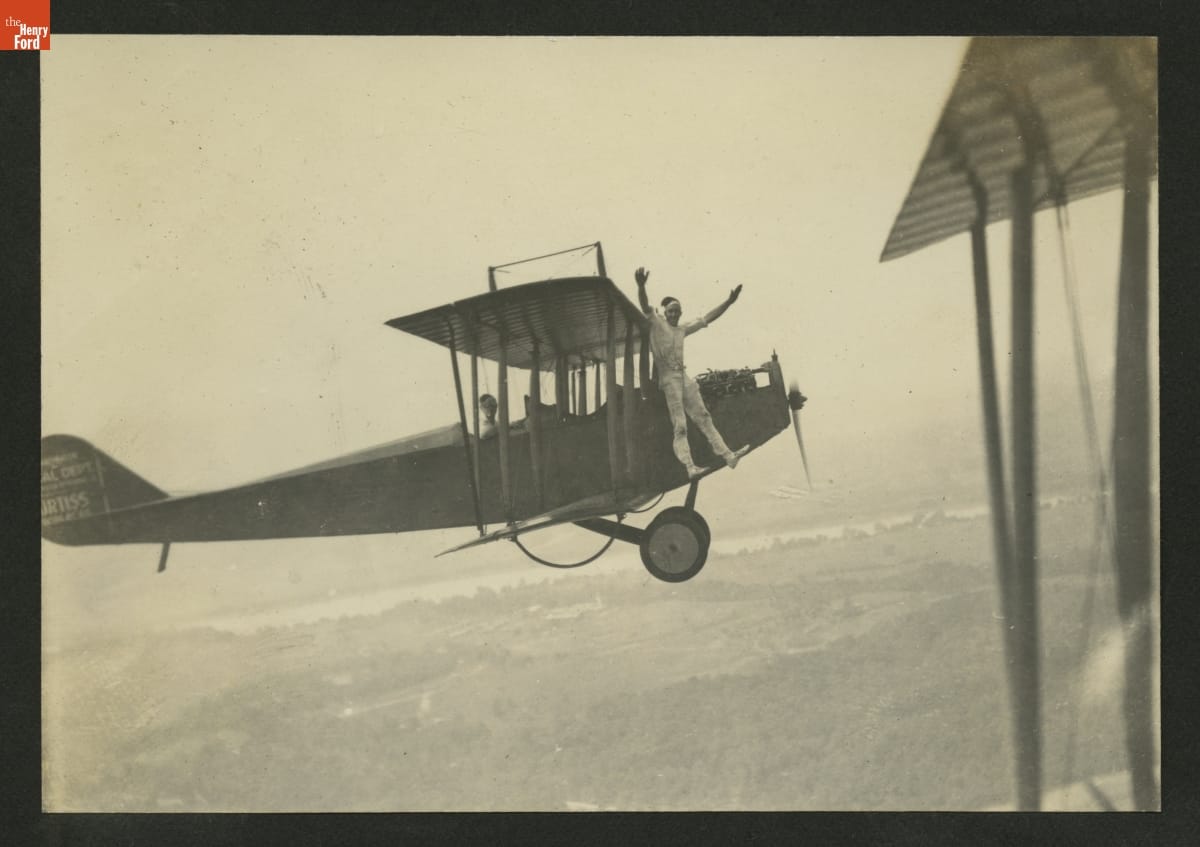 Following the war, many American pilots were equally desperate to keep flying and to earn a living. “Barnstorming”—performing death-defying aerial stunts for paying crowds—offered a way to do both. Surplus military Jennys could be bought for as little as $300. The same qualities that suited the planes to training—durability and reliability—were just as well-suited to stunt flying. The JN-4 became the quintessential barnstormer’s plane, which explains why our Canuck is featured so prominently in the Heroes of the Sky barnstorming zone. As for the inspiration behind our plane’s paint job… that’s another kettle of fish. 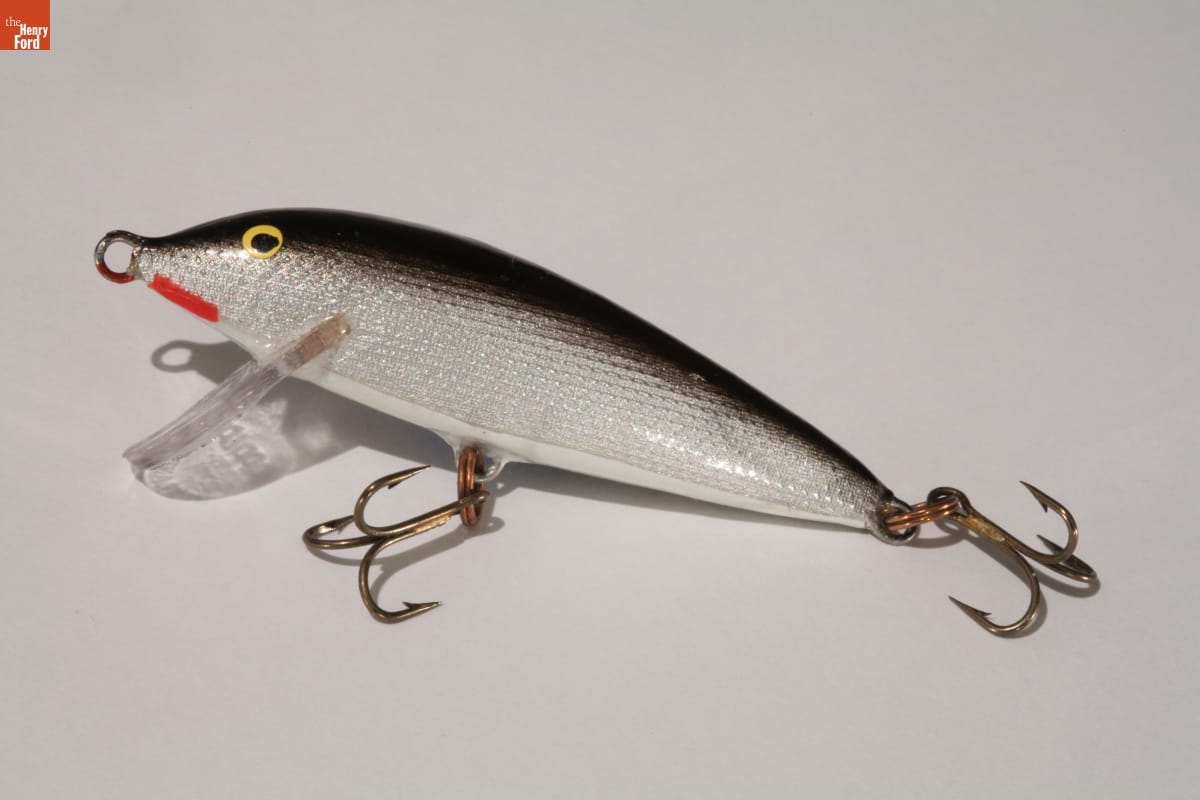 Fishing lures, similar to this one, inspired the unusual paint scheme on our Curtiss JN-4. / THF150858

Founded in 1902, James Heddon and Sons produced fishing lures and rods at its factory in Dowagiac, Michigan. Heddon’s innovative, influential products helped it grow into one of the world’s largest tackle manufacturers. That inventive streak spilled over into Heddon’s advertising efforts. In the early 1920s, the company acquired two surplus JN-4 Canucks and painted them to resemble Heddon lures. These “flying fish” toured the airshow circuit to promote Heddon and its products. While our Canuck isn’t an original Heddon plane, it’s painted as a tribute to those colorful aircraft. (Incidentally, the Heddon Museum is well worth a visit when you’re in southwest Michigan.)

Every airplane in Heroes of the Sky has a story to tell. Some of them are even fish stories!