With the North American International Auto Show now moved to June, we’ve had an unusually long dry spell in the Motor City when it comes to automotive exhibitions. The drought was finally broken by the annual Detroit Autorama, held February 28-March 1. Always a major show, this year’s edition was no exception with more than 800 hot rods and custom cars spread over two levels of the TCF Center. 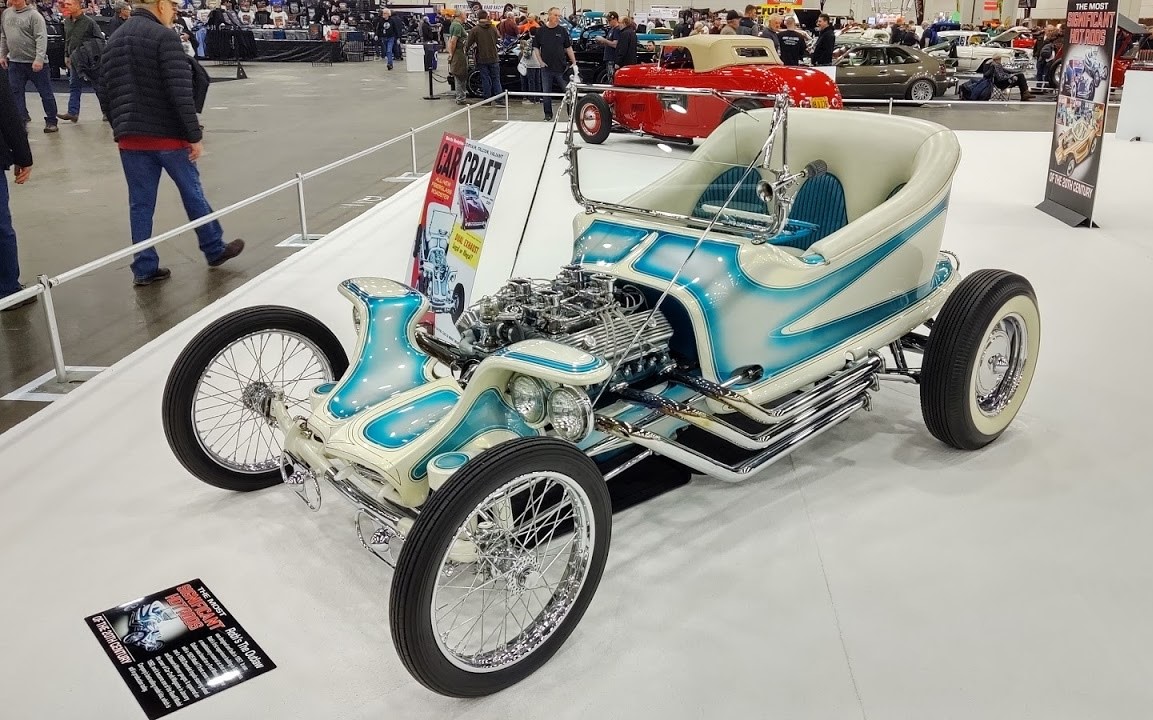 Ed “Big Daddy” Roth’s “Outlaw,” honored as one of the 20th Century’s most significant hot rods.

The most memorable display this year was immodestly (but quite accurately) labeled “The Most Significant Hot Rods of the 20th Century.” It was a veritable who’s who of iconic iron featuring tributes to Bob McGee’s ’32 Ford, Ed “Big Daddy” Roth’s  “Outlaw” and “Beatnik Bandit,” Tommy Ivo’s ’25 T-Bucket, and Norm Grabowski’s ’22 T-Bucket – the last immortalized as Kookie Kookson’s ginchy ride in the TV show 77 Sunset Strip. 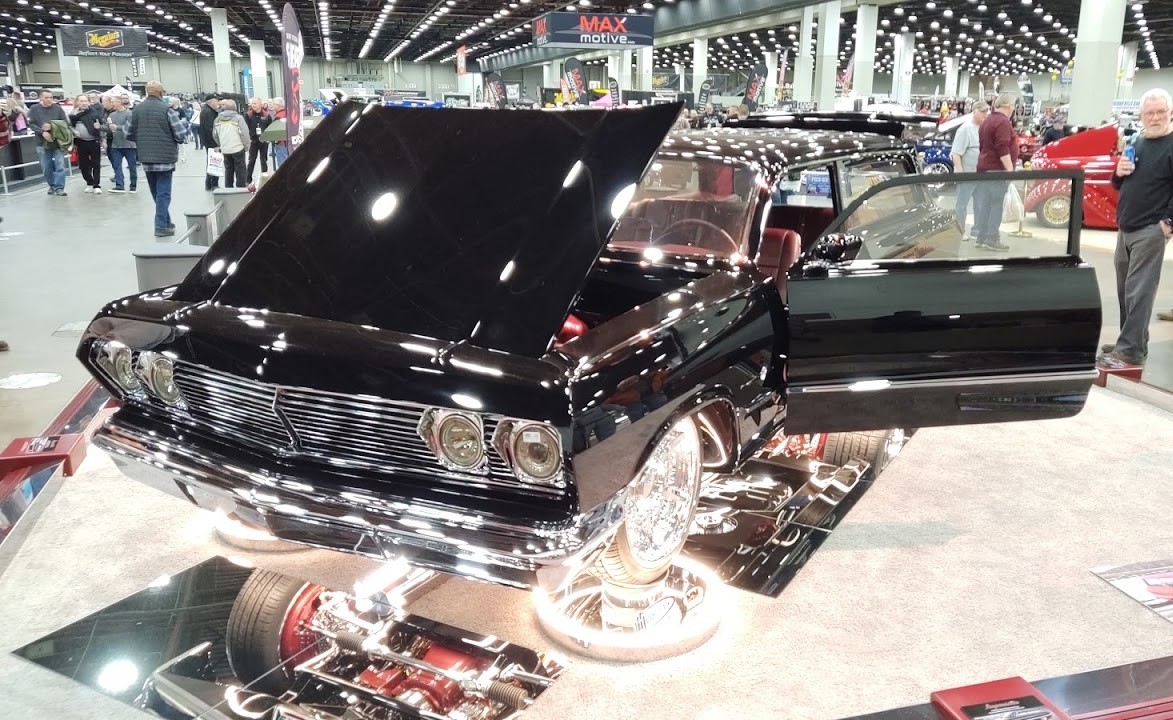 “Impressive” indeed. The 1963 Chevy wagon that won this year’s Ridler Award. (The chrome on those wheels practically glows!)

The biggest excitement always surrounds the Ridler Award, named for Autorama’s first promoter, Don Ridler. It’s the event’s top prize, and only cars that have never been shown publicly before are eligible. Judges select their “Great 8” – the eight finalists – on Friday and, for the rest of the weekend, excitement builds until the winner is revealed at the Sunday afternoon awards ceremony. The winner receives $10,000 and the distinction of having her or his name engraved forever on the trophy. It’s among the highest honors in the hot rod and custom car hobby. This year’s prize went to “Impressive,” a 1963 Chevrolet two-door station wagon built by a father-son-grandson team from Minnesota. With a Ridler now to its credit, no one can question the car’s name again. 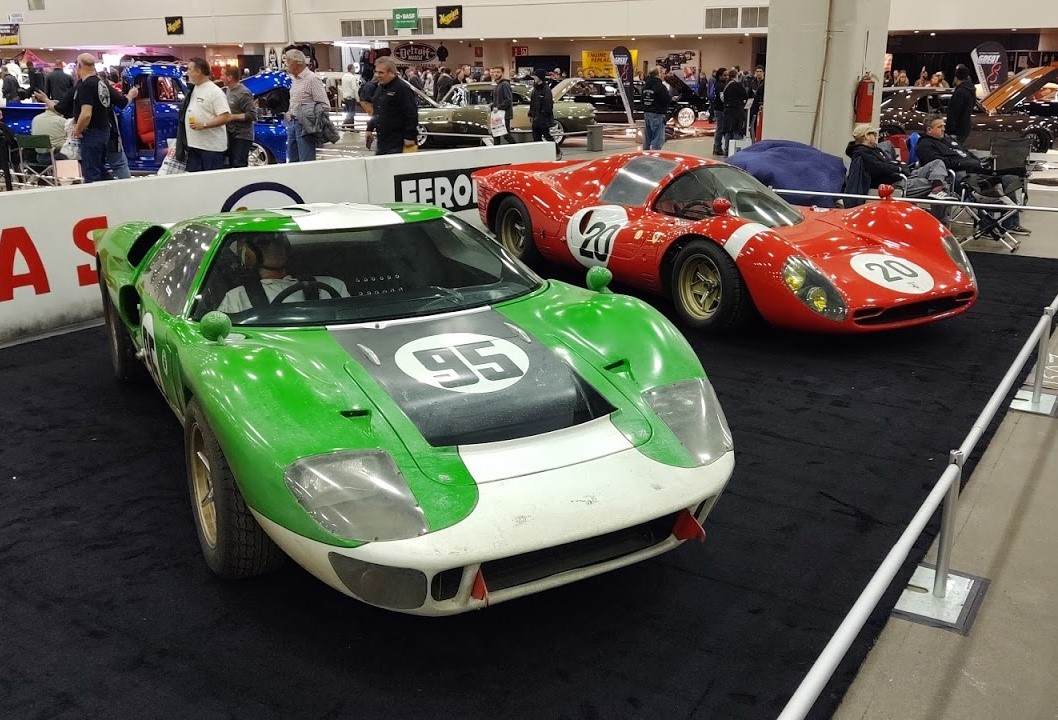 There’s always a little Hollywood magic on the show floor somewhere, and this year it came from a pair of replica cars used in two big racing scenes in the hit 2019 movie Ford v Ferrari. From the 1966 Daytona 24-Hour was the #95 Ford GT40 Mk. II driven by Walt Hansgen and Mark Donohue. From the 1966 Le Mans 24-Hour was the #20 Ferrari 330 P3 driven by Ludovico Scarfiotti and Mike Parkes. How accurate were the copy cars? Judge for yourself by looking here and here. 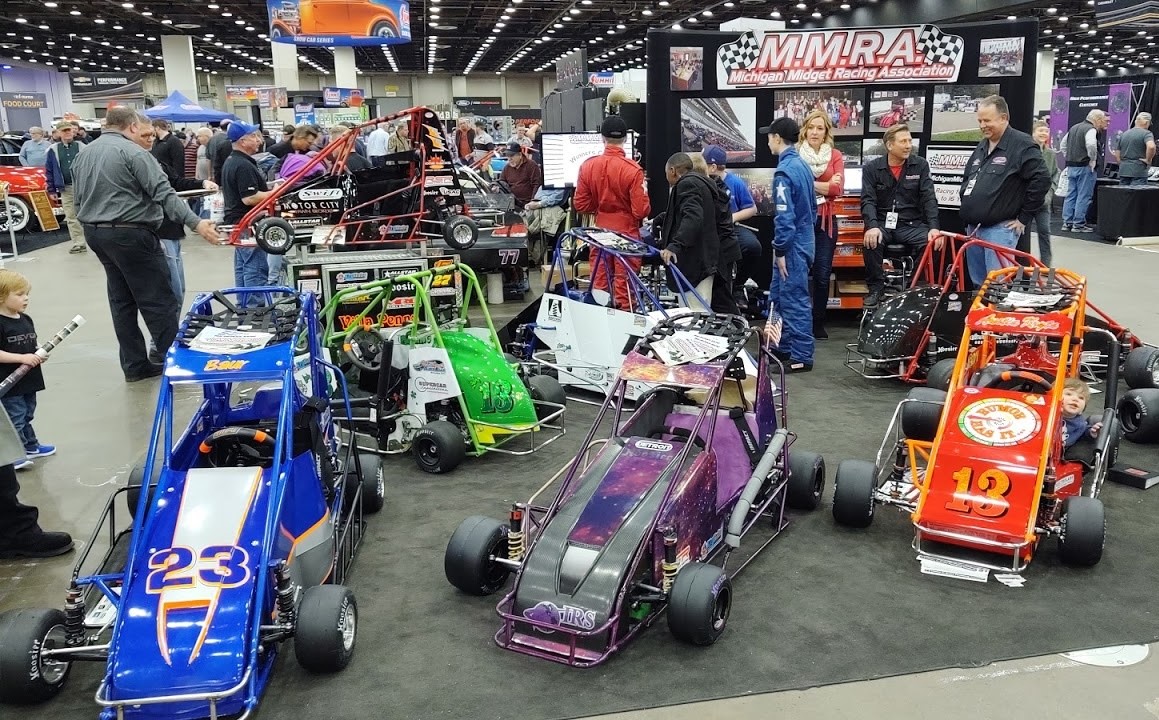 The Michigan Midget Racing Association introduces kids to the excitement of auto racing.

Those who are worried about younger generations not being interested in cars could take comfort from the Michigan Midget Racing Association. The organization’s Autorama display featured a half dozen cars that kids could (and did) climb into for photos. Quarter Midget cars are sized for kids anywhere from 5 to 16 years old. And while they look cute, these race cars aren’t toys. Their single-cylinder engines move the cars along at speeds up to 45 miles per hour. M.M.R.A.’s oval track in Clarkston is surfaced with asphalt and approximately 1/20 of a mile long. 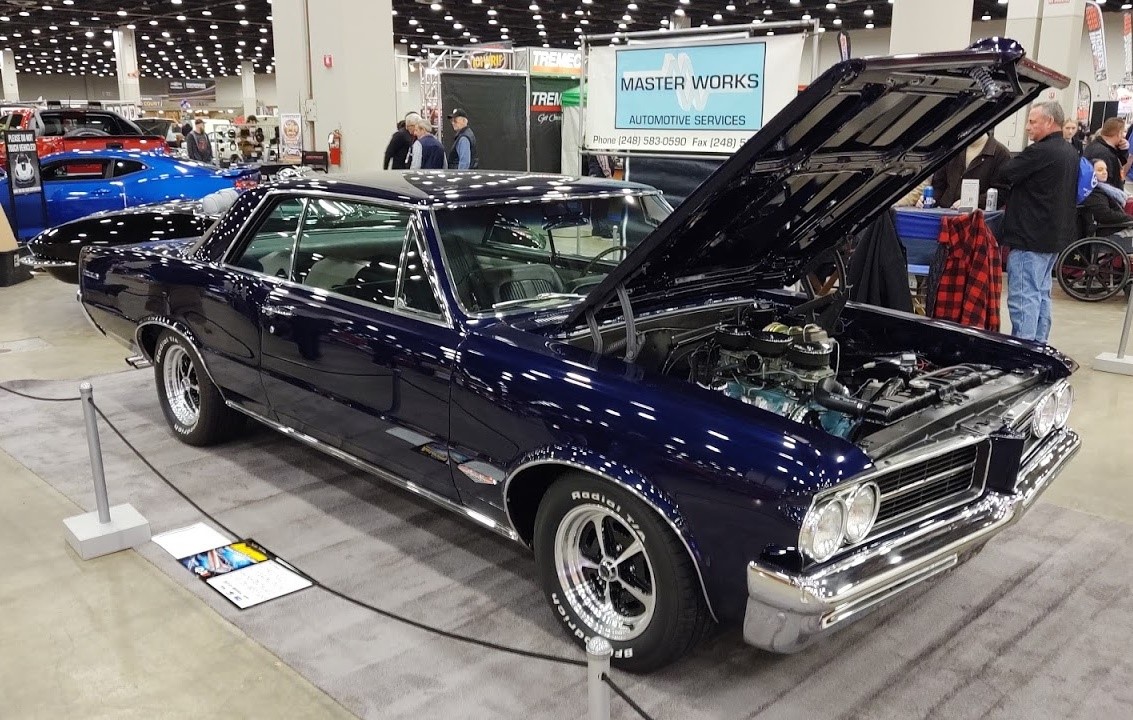 Our 2020 Past Forward Award winner – a 1964 Pontiac GTO that matured with its owner.

Each year, The Henry Ford proudly presents its own trophy at Autorama. Our Past Forward Award honors a vehicle that combines inspirations of the past with innovative technologies of the present. It exhibits the highest craftsmanship and has a great story behind it. This year’s winner put a novel spin on the “Past Forward” concept. It’s a 1964 Pontiac GTO owned by Fred Moler of Sterling Heights, Michigan. Fred bought the car while he was in college and, appropriately for someone at that young age, drove it hard and fast. When adult responsibilities came along, he tucked the Goat away in a barn. Some 40 years later, Moler pulled the car out of the barn for restoration. He wanted to relive his college days but knew that neither he nor the GTO were the same as they were decades ago. Moler kept the trademark 389 V-8 but replaced the drivetrain with a more sedate unit. He added air conditioning, improved the sound system, and ever so slightly tinted the glass. In his own words, Moler enhanced the car to make it comfortable for his “more mature” self. He brought a piece of his own past forward to suit his present-day wants and needs. Like I said, a great story. 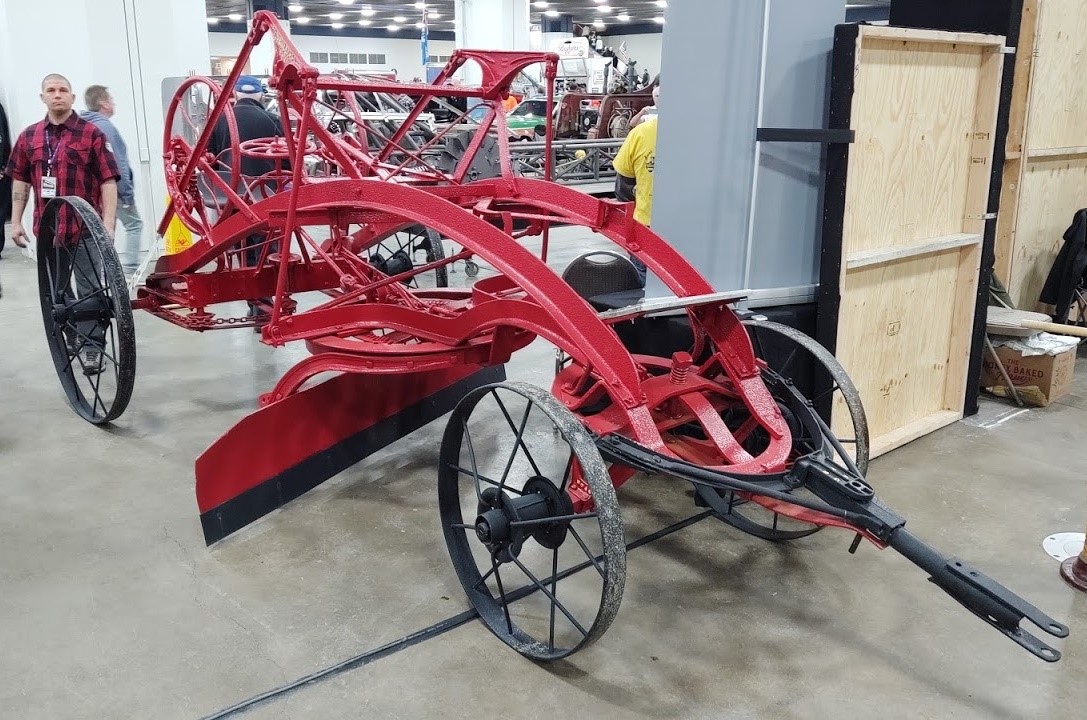 Autorama veterans know that the grittiest cars are found on TCF Center’s lower level – the infamous domain known as Autorama Extreme. Here you’ll find the Rat Rods that take pride in their raw, unabashedly unattractive appearance. By all means, take the escalator downstairs. There are always gems among the rats. This year I was thrilled to find an 1894 horse-drawn road grader manufactured by the F.C. Austin Company of Chicago. Utilitarian vehicles like this are rare survivors from our pre-automobile age. Autorama Extreme is a great place to tap your feet as well. Live music fills the lower level throughout the weekend – lots of 1950s rockabilly, of course, but plenty of blues and soul too. 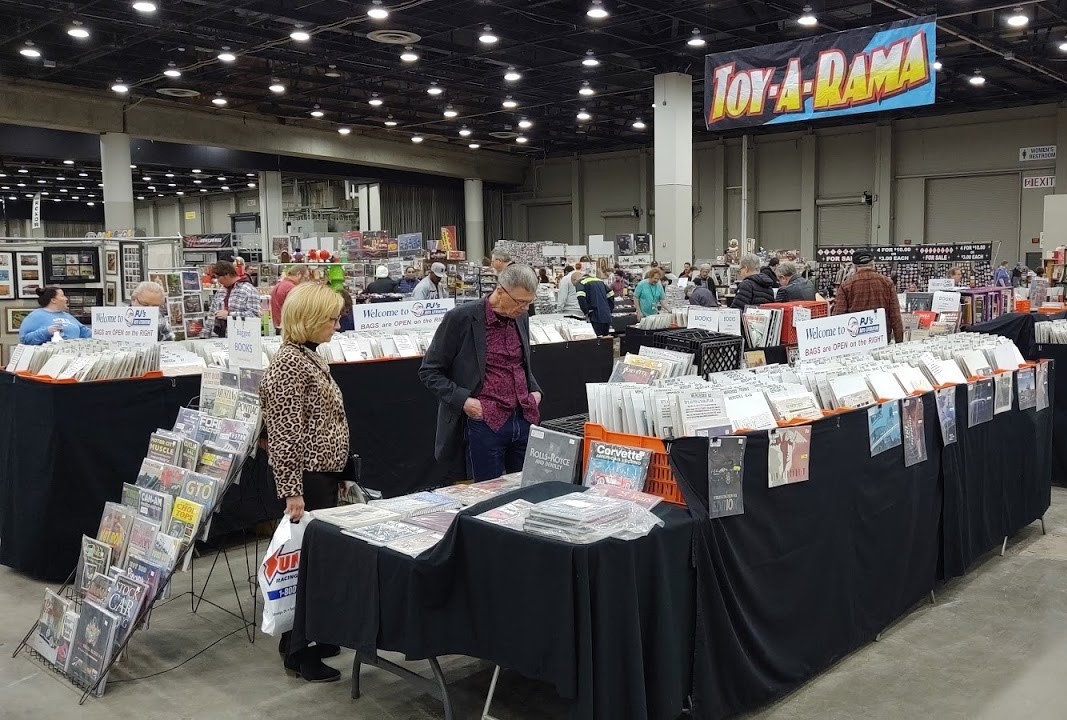 Don’t miss Toy-a-Rama with its assortment of vintage car books and brochures.

Each year, I make a point of visiting Toy-a-Rama at the back of TCF Center. Vendors sell hundreds of plastic model kits, diecast models, memorabilia, and toys. But it’s the great selection of auto-related books, magazines, and vintage sales literature that always reels me in – and leaves my wallet a little lighter on the way out. 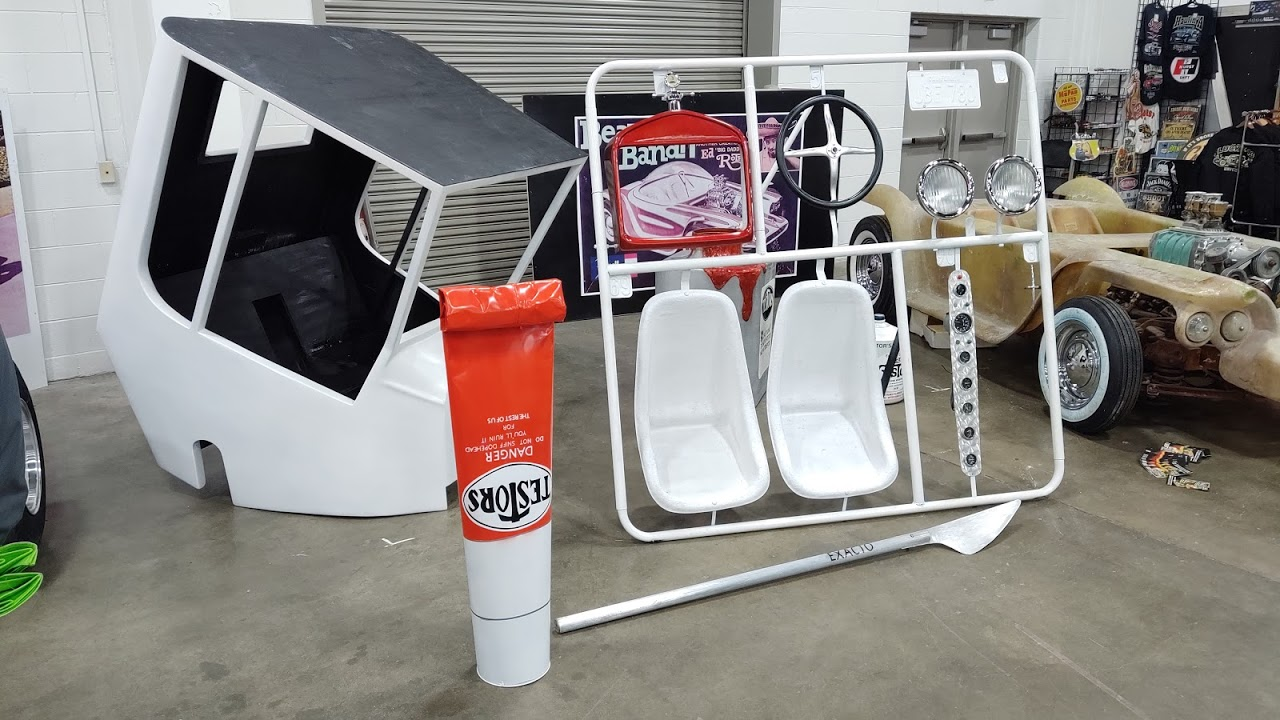 A beautiful 1:1 scale model of “Uncertain-T” – some assembly required.

And speaking of model kits, maybe the coolest thing I saw all weekend was down in Autorama Extreme. It was a beautifully crafted, partially-assembled model of Steve Scott’s “Uncertain-T” just like Monogram used to make – but this one was life-sized. Really, the giant sprue was terrific enough, but the giant hobby knife and glue tube took the whole thing to the next level. (Skill Level 2, as the box might’ve said.)

All in all, another great year celebrating the wildest, weirdest, and winningest custom cars and hot rods around. If you’ve never been, make sure you don’t miss Autorama in 2021.