A Horse-Drawn Recycler: The Manure Spreader 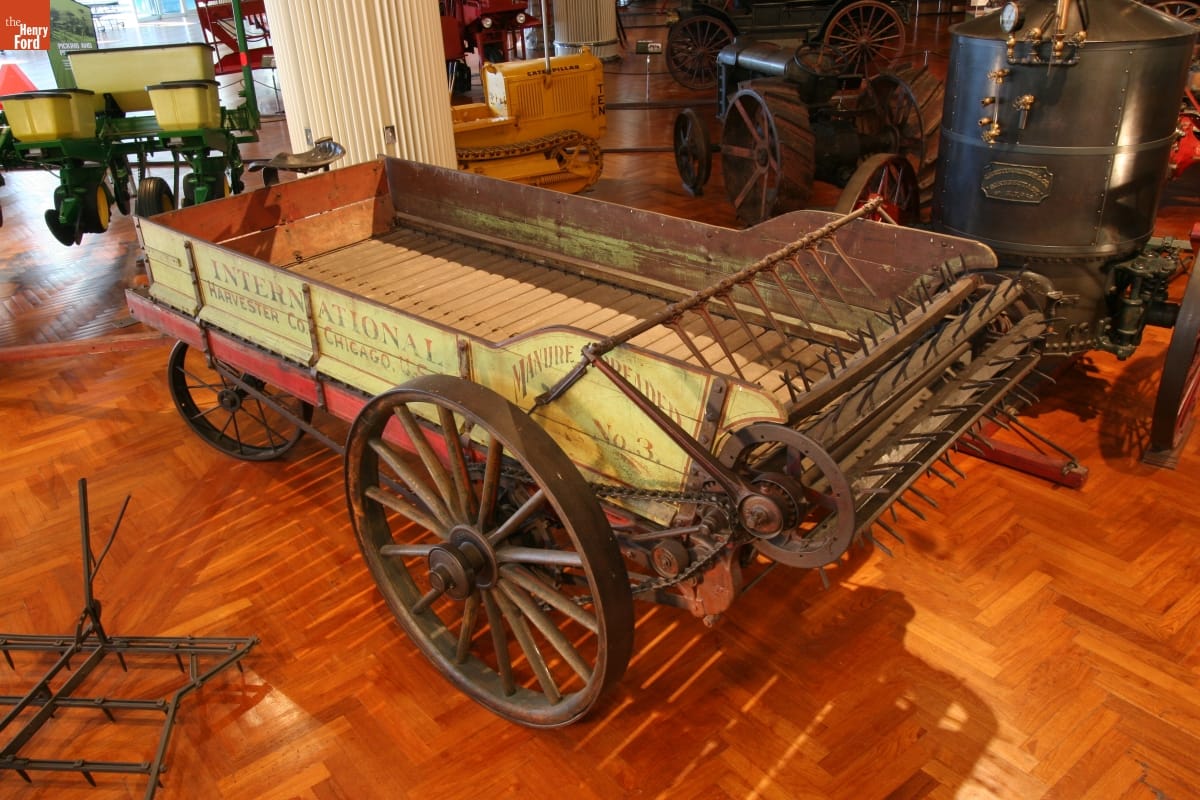 The act of farming draws nutrients from the soil. If the nutrients are not returned, the soil will become depleted and lose productivity. One of the best ways to restore the soil is to recycle what was removed from it by spreading manure. Manure spreaders made this dirty job not-so-dirty.

Caring for the Land: Forgotten—Then Rediscovered

To Europeans living in the American colonies, the availability of land in North America seemed limitless. Farmers paid little attention to caring for the soil, quickly abandoning the fertilizing activities they had practiced in Europe. These farmers felt it more cost effective to simply move on to new land when the soil lost productivity, rather than put in the effort to restore its fertility.

By the 1800s, this strategy had begun to run its course. As land went fallow—first in the east, and later in the Midwest and plains—American farmers had to rediscover the soil stewardship practices they had lost generations earlier. Since much of the grain grown on a farm is fed to livestock, farmers began to gather up barnyard manure from cows, horses, pigs, and other animals and spread it on their fields to restore the soil’s fertility. 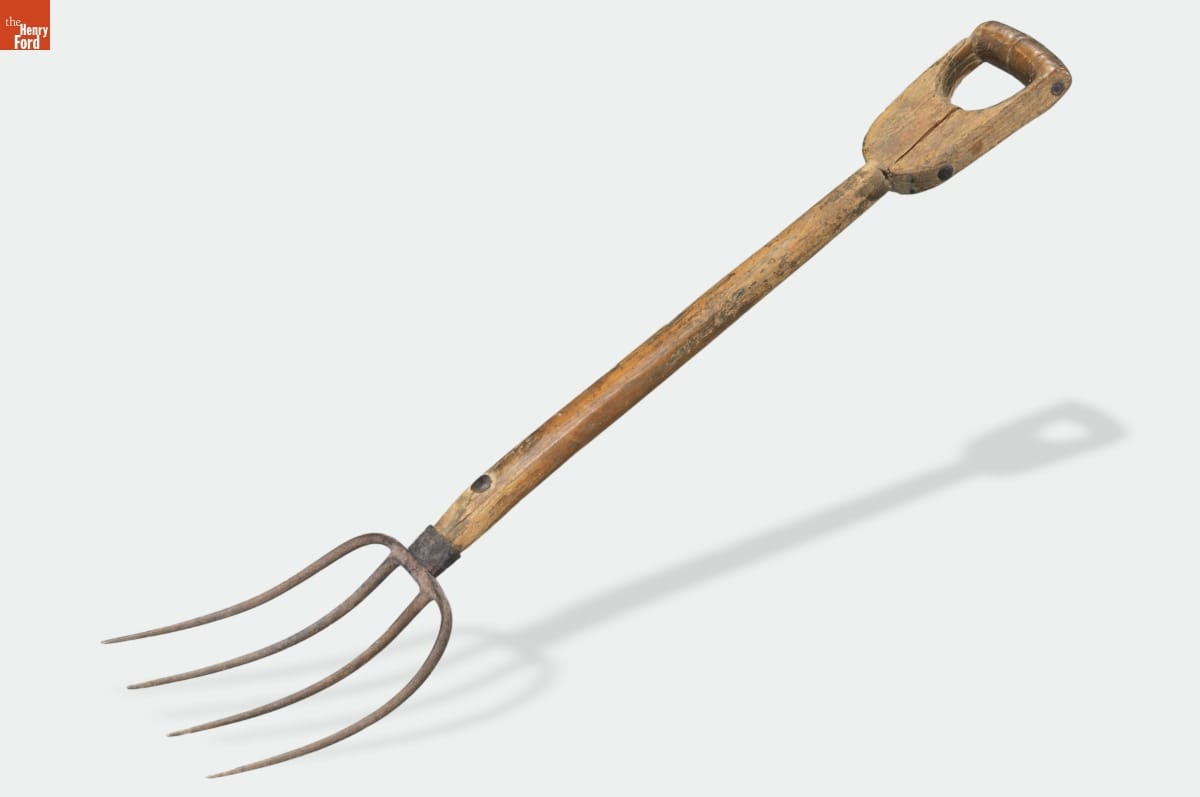 The Dirtiest of the Dirty Jobs

Spreading manure is one of the most unpleasant and labor-intensive jobs on a farm. It requires a lot of effort and a strong constitution to scoop up raw manure and straw bedding from the barnyard and stalls into a wagon, and then fork it out evenly over many acres of fields. David C. Voorhees, a farmer in Somerset, New Jersey, wrote in his diary of spreading 215 loads of manure in September 1875 following the harvest. Spreading manure needs to be done properly to be effective. Too much manure in one spot can “burn” the soil, so clumps need to be broken up before they are tossed on the field.

If ever there was a farm task that was ripe for mechanization, it was spreading manure. Throughout the 1800s, dozens upon dozens of patents were issued for manure spreaders. By the 1870s, the design of manure spreaders had been sufficiently refined, and the manufacturing process had developed enough to make manure spreaders both effective and affordable. 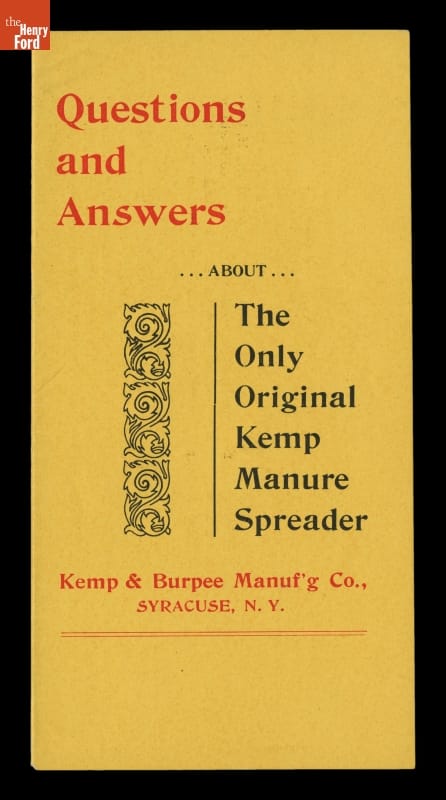 This pamphlet for a Kemp & Burpee Manufacturing Co. manure spreader described its operation and included many testimonials. The company was absorbed by International Harvester in 1906. / THF125272

How to Make the Manure Fly

The more successful manure spreaders had two key design features: a continuously moving apron, or floor, which automatically moved manure toward the back of the wagon to be spread; and a beater at the back of the spreader to pulverize manure and spread it evenly across the field. With a good manure spreader, one person could do the work of five or more—and those other people were surely happy to do some other job. 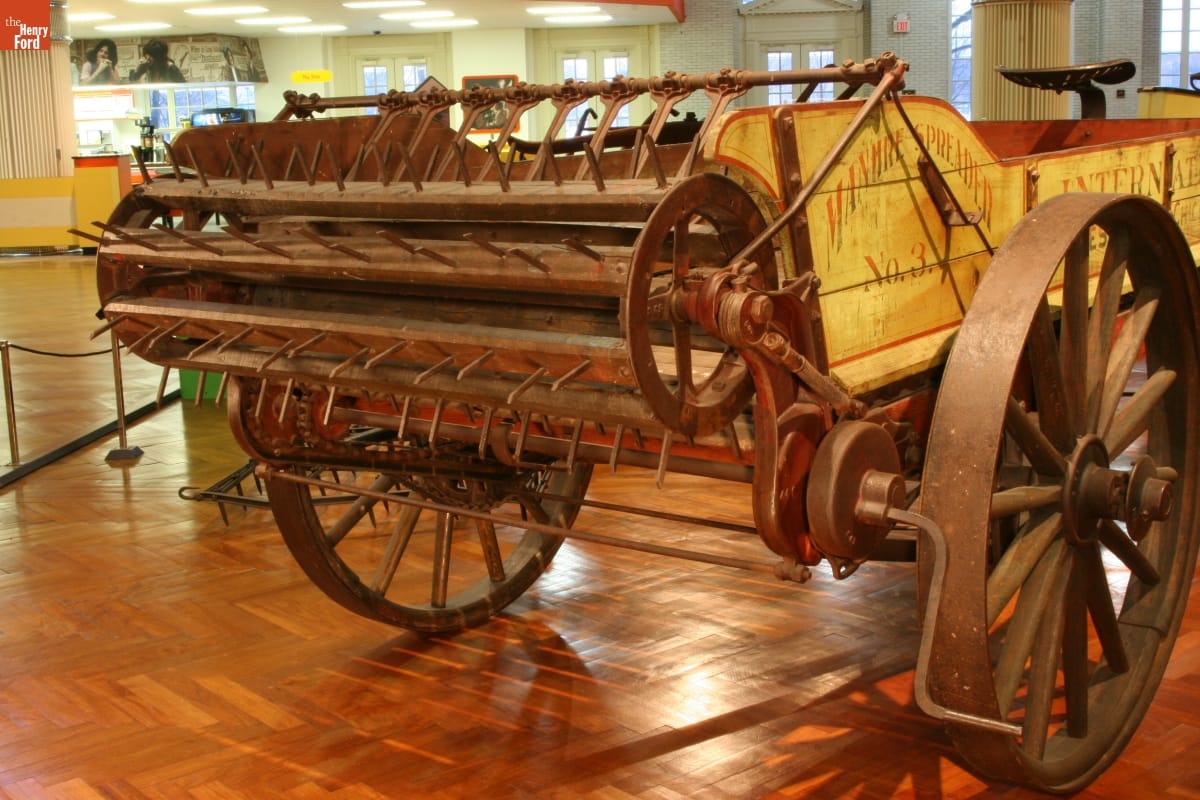 The beater on this circa 1905 manure spreader broke the manure up into small pieces and spread it evenly on the field. / THF89816

If spreading manure was hard on farmers, it was even harder on farm equipment, since manure rapidly corrodes and rots manure spreader parts. Consequently, early manure spreaders rarely survived to be passed on to the next generation, much less make it into a museum.

The Henry Ford’s circa 1905 International Harvester manure spreader is one of these very rare survivors. It is all the more extraordinary because it retains its original paint and parts. It is an excellent example of the prevailing manure spreader design of the early 1900s.

In many ways, farm practices can work against nature. The manure spreader is a great example of a tool that helped farmers reestablish the natural cycle by recycling the bounty of the soil back into the soil. The manure spreader does the dirtiest job on the farm—but it is a key part of making farming a sustainable undertaking.


Jim McCabe is former Collections Manager/Acting Curator of Agriculture and the Environment at The Henry Ford.