How much horsepower really comes from a horse? While the answer to this may seem obvious, it is complicated. The most complete answers start out with "it depends."

Much of farming is strenuous, tedious, repetitive work. For American farmers, chronic labor shortages made the effort of farm work even more taxing, so they looked for ways to get farm work done with less manpower. Horses and oxen were the main source of power, used for centuries for plowing. Improved farm machinery throughout the 1800s added the power of horses to other activities such as planting, cultivating, and, eventually, mowing and harvesting. Farmers understood the effort required for these tasks in terms of the number of horses needed to pull the equipment, such as one horse for a cultivator, and three or more for a harvester or large plow. Applying the power of horses to farm work helped to steadily increase the productivity of American farms throughout the 1800s. This 1854 engraving depicted the centuries-old practice of plowing with horses. Throughout the 1800s, farmers increasingly used horses or oxen for other work as well, including planting, cultivating, mowing, and harvesting. / THF118302

Yet horsepower as a measure of power pre-dates the mechanization of the farm. It was developed by James Watt in the 1780s as a way to measure the output of a steam engine. Horsepower was based on his observations of how much work a horse could do in a normal ten-hour day, pulling the sweep arms of the horse-powered pumps that were used to remove water from mines. This worked out to 33,000 foot-pounds per minute, or the effort required to raise 33,000 pounds of water by one foot in one minute. 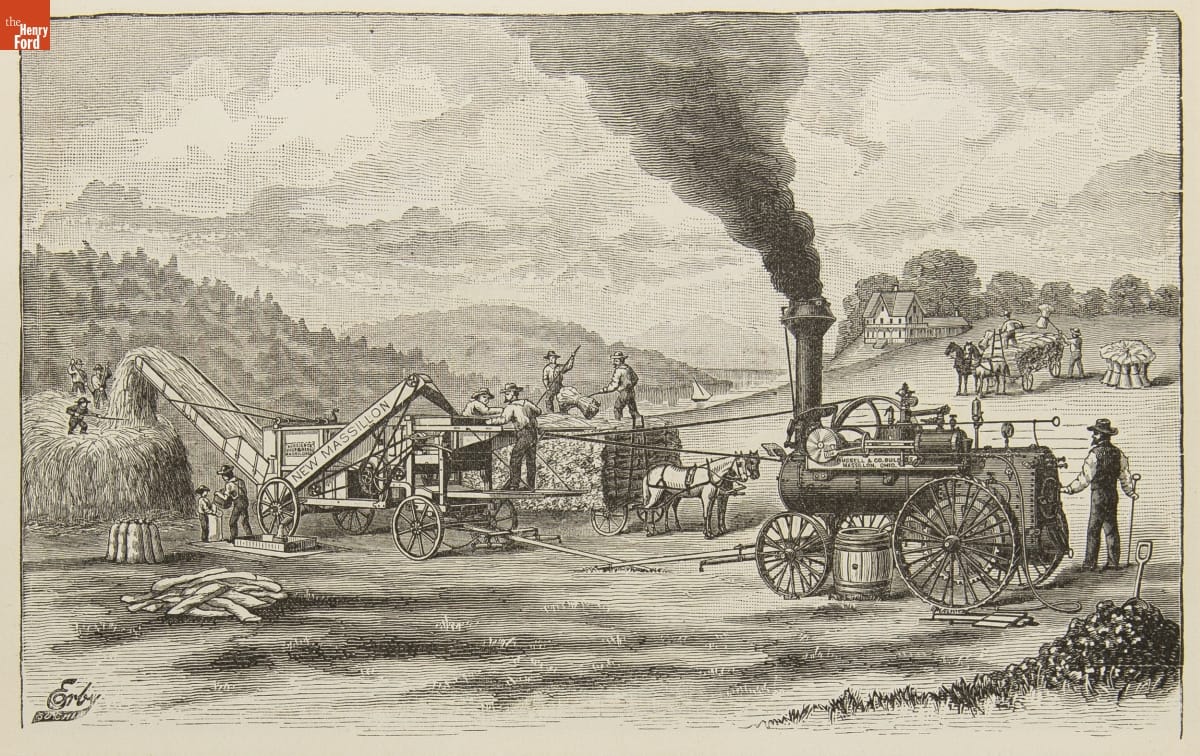 As farmers mechanized barn or farmyard work like threshing, winnowing, corn shelling, and corn grinding, they began to use stationary power sources—either treadmills and sweeps powered by horses, or steam engines. Here, the agricultural idea of horsepower and the industrial idea of horsepower bumped heads. For example, the portable steam engine pictured just below is rated at ten horsepower. It could be used to run the same piece of farm equipment as the two-horse tread power depicted below the steam engine, which used, well, two horses. Some farmers came to use a rule of thumb for farm equipment, calculating that one horse was worth about three horsepower in an engine. Why is this? Engine horsepower ratings (and there are many varieties of these) are typically overestimated because they are often calculations of the power delivered to the machine—not how much actually reaches its "business end." For example, they do not account for power losses that occur between the piston and whatever the piston is driving—which can be more like 70% to 90% of the rated horsepower. In addition, those measures are made at the ideal engine speed.

On the other hand, numerous studies have shown that peak horsepower for a horse (sustainable for a few seconds) is as high as 12-15 horsepower. This is based on calculated estimates, as well as observed estimates (recorded in a 1925 study of the Iowa State Fair's horse pull). Over the course of a ten-hour workday, however, the average output of a horse is closer to one horsepower—which coincides with James Watt's original way of describing horsepower.

So how much horsepower comes from a horse? As we see, it depends. If we measure it in an optimal way, as we do with engines, it is as high as 15 horsepower. If we measure it as James Watt did—over the course of a long 10-hour day, horses walking in a circle—it gets down to about one horsepower. Nineteenth-century farmers quickly learned that if they were buying an engine for a task horses had previously performed, they needed an engine rated for three horsepower for every horse they had used for the task.


This post by Jim McCabe, former Collections Manager and Curator at The Henry Ford, originally ran as part of our Pic of the Month series in May 2007. It was updated for the blog by Saige Jedele, Associate Curator, Digital Content.