Getting Seeds in the Ground: Urgent Business 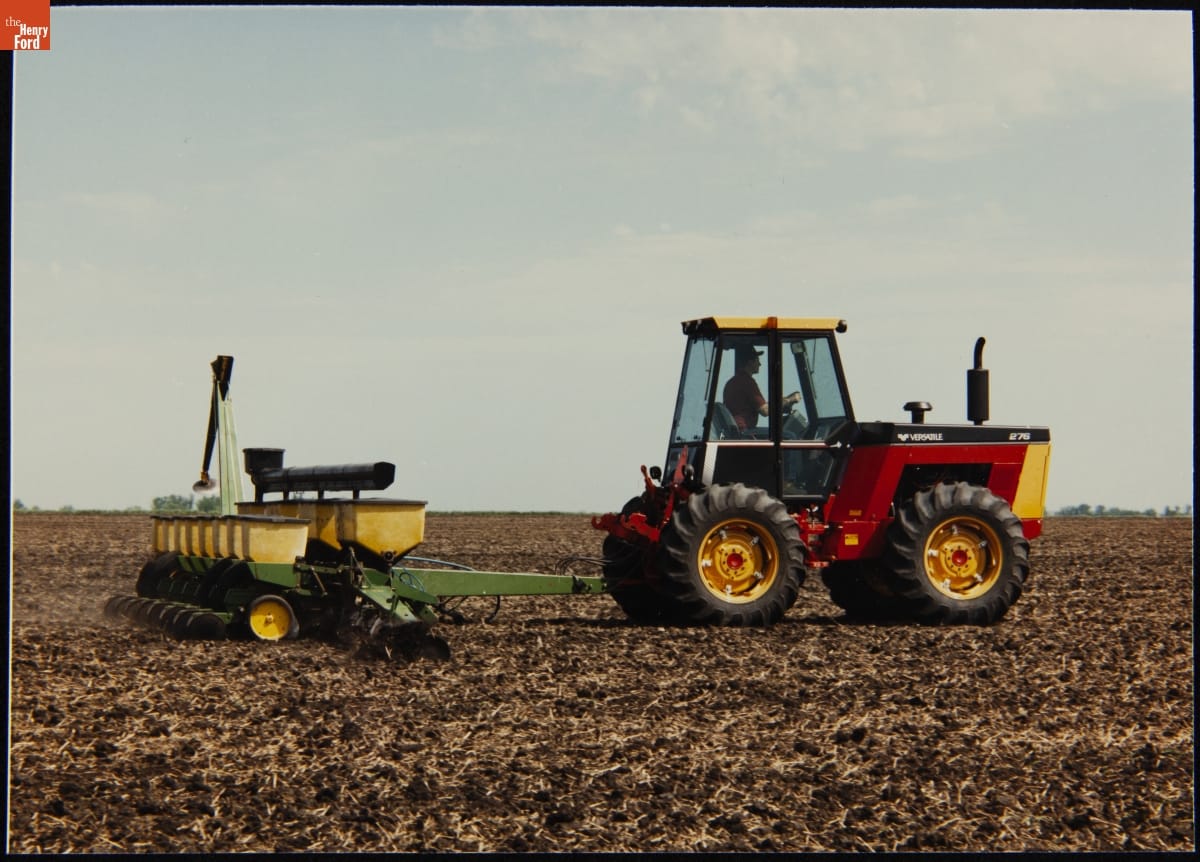 Henry Ford Museum of American Innovation includes an exhibition called Agriculture and the Environment. The first section, Preparing the Soil, includes artifacts used by farmers to prepare the seed bed and plant crops. These artifacts all reflect practices common during the mid-19th to early-20th centuries, with the exception of two items: one, a Caterpillar continuous track tractor designed for use in orchards, and the John Deere 7000 No-Till Planter, also known as the MaxEmerge 7000 conservation planter. This post puts the Deere MaxEmerge planter into perspective and explains its utility as a no-till planter, both historically and today.

A quick overview of tillage—that is, how farmers prepare land for growing crops—helps lay the groundwork (as it were). For thousands of years, farmers turned the topsoil over with a plow pulled by a draft animal—a single steer or team of oxen, draft horses, or mules. Henry Ford’s experiments with his “automotive plow” and subsequent introduction of the affordable Fordson tractor led to the replacement of draft animals on most farms after World War II, but the plow endured. Plowing broke up the roots of whatever vegetation was established before or between plantings. This was the first step in preparing a seed bed. 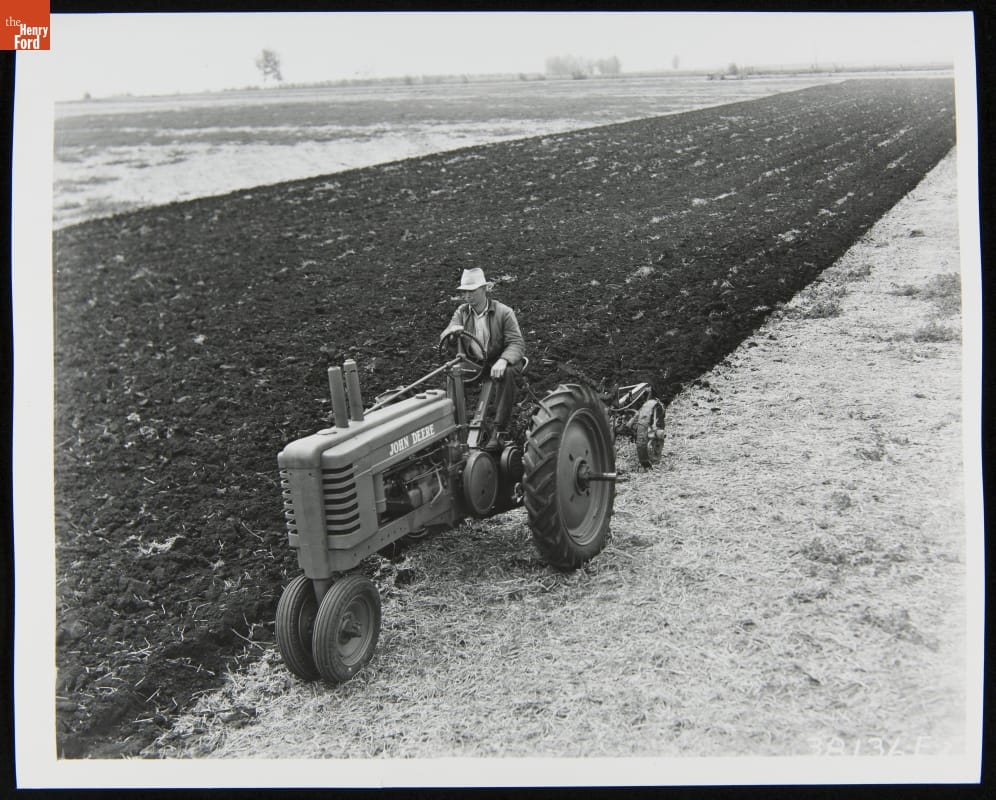 The next step involved working the plowed ground to break up clods and create a more even surface. This required use of harrows or discs of various designs, as you can see here. Hitching technology installed on the Ford-Ferguson 9N tractor starting in 1939 and adopted by tractor manufacturers helped keep this disc tracking in line with the tractor. Farmers with large acreages under tillage favored row-crop tractors like the John Deere Model “B” in the photo below, where a farmer is discing a plowed field. The narrow wheel-spacing at the front end ran between rows of crops. After plowing and discing, some farmers harrowed fields to put the finishing touches on the seedbed. 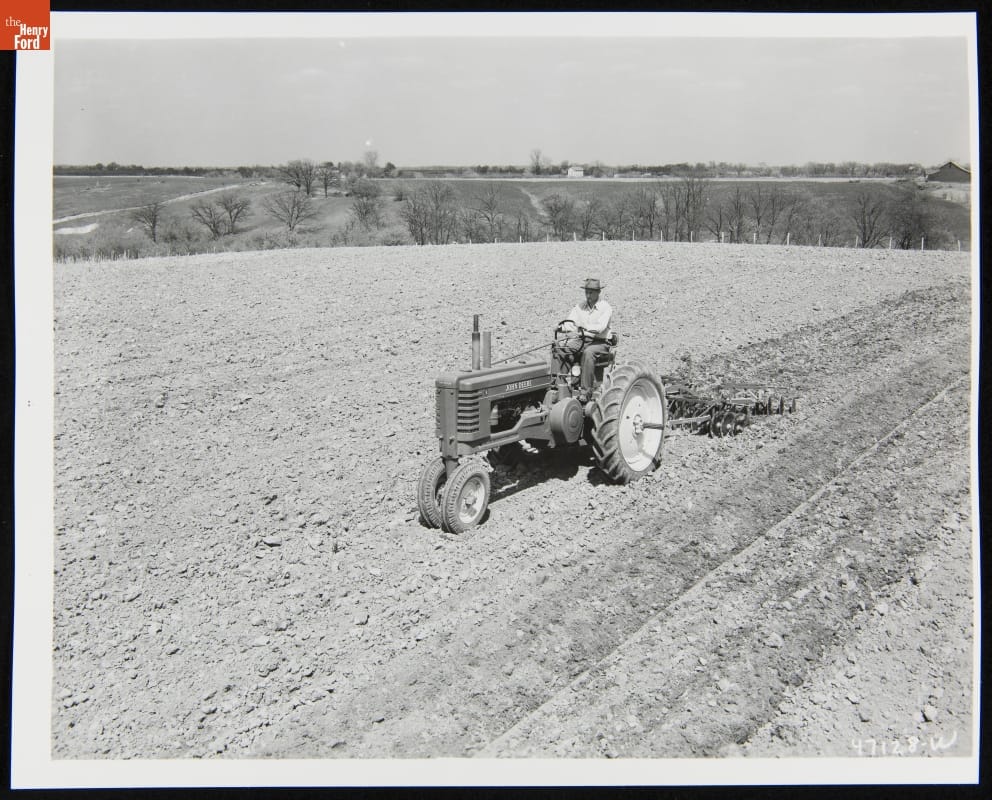 You can explore more than 40 tillage implements in The Henry Ford collection here. This is just the tip of the iceberg of mechanical innovations designed to ease the physically demanding process of field preparation. These tools helped farmers practice integrated pest management, too, because careful field preparation pulverized the organic material that insects like boll weevil in cotton or corn borer larvae lived in during the winter months. These pests could destroy crops in a pre-insecticide agricultural system.

Tillage, however, exposed topsoil to the elements. The more acreage farmers tilled, the more topsoil they lost due to erosion. In addition, severe droughts parched soil, destroying all organic matter. This exacerbated erosion as more and more topsoil blew away or washed away with heavy rains.

Different crops cover the ground in different ways. Farmers raising small grains drilled seed into prepared seed beds. The grain, planted at times of the year when other plant growth slowed, needed little to no cultivation. You can see grain drills and learn more about them here, including photographs of the Bickford & Huffman grain drill in use at Firestone Farm in Greenfield Village.

Prior to the adoption of in-season herbicides, most crops required cultivation after planting to disturb the roots of plants that threatened to choke out the cash crop. Farmers used different cultivators depending on the crops they grew, but cultivators further disturbed the soil and could hasten moisture evaporation. 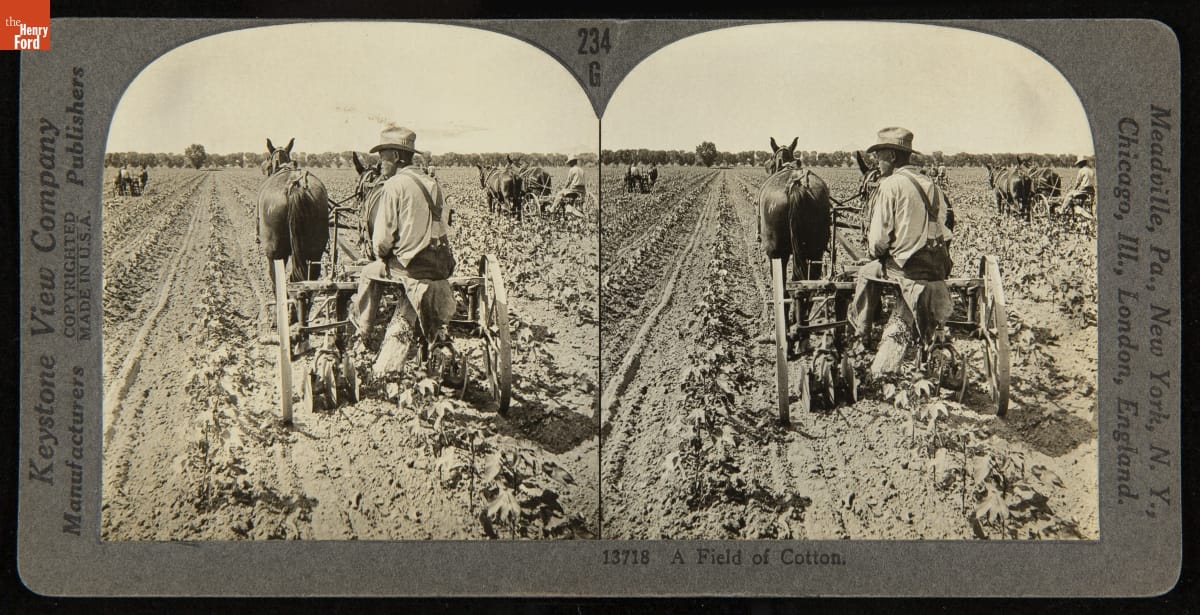 The photograph below shows a row-crop tractor with an under-mounted cultivator at work in a soybean field. The single-front tire running down the middle of two rows ensured that the cultivators tracked between rows, to better remove weeds in between the cash crop. 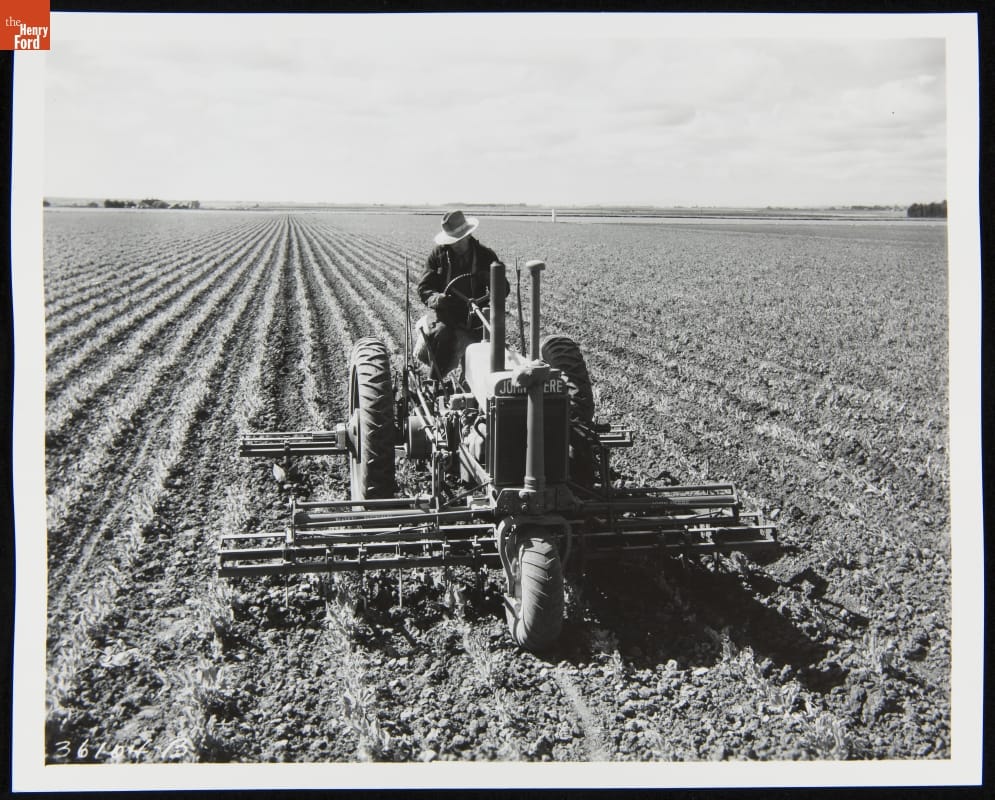 The Development of No-Till

You may have already grasped the connection between tillage and the no-till planter. Intensive cultivation of cropland contributed to topsoil erosion. The loss of the fertile topsoil reduced yields, and extreme weather worsened the loss. This led many to call for radical changes in tillage methods.

Agricultural scientists and engineers with the U.S. Department of Agriculture and state-based land-grant colleges addressed the challenge quickly. The University of Illinois established the Dixon Springs Agricultural Center in southern Illinois in 1934 to research soil erosion and low-till options. Purdue University in Indiana began the first experiments planting row crops in uncultivated soil in 1944. Russell R. Poyner, the agricultural engineer who worked on this project, went to work at International Harvester Company in 1945. By 1947, he submitted a patent for a mulch-tiller-planter designed for erosion control and conservation of moisture. He coined the new tillage approach “stubble mulch” farming, and as assignor to International Harvester, received U.S. Patent No. 2,577,363 in 1951. International Harvester produced the two-row McCormick M-21 till planter with fertilizer application only briefly and stopped altogether in 1955 due to sluggish sales.

Another early no-till proponent, agronomist George McKibben, worked at Dixon Springs. He and Donnie Morris, the machinery engineer at Dixon Springs, tested a zero-till planter by 1966. Morris describes the challenges he solved—specifically, how to get the seed in the ground. The research team used his “sod and stubble” planter starting in 1969, but an appeal to Deere and Company (the company that makes John Deere brand items) fell on deaf ears.

Allis-Chalmers released the two-row No-Til planting system in 1966, recognized as the first commercially available (and successful) no-till planter. The planter had a fluted coulter (vertical cutting blade) that sliced crop residue and prepared the seed bed just ahead of the fertilizer tank and planter unit. 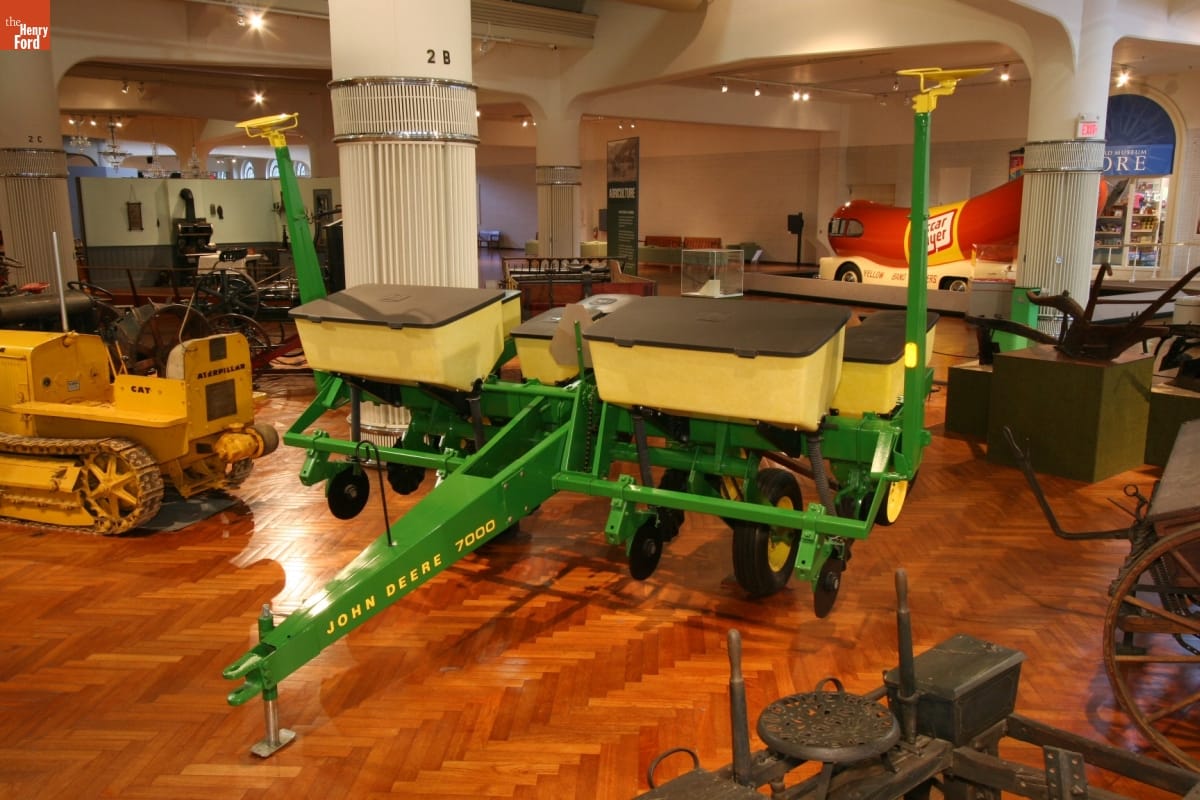 Peter Cousins, then Curator of Agriculture at The Henry Ford, acquired the John Deere 7000 No-Till Planter because, as he wrote in a memo to The Henry Ford’s collections committee on August 23, 1994, he considered it one of a few “superstars” of modern agricultural technology. In that same memo, he explained that of the three companies that introduced no-till planters, only Deere and Company survived. Allis-Chalmers left the farm implement business in 1985. International Harvester also ended its agricultural lines and broke up in 1985. Thus, he believed that only Deere and Company could locate, restore, and donate a first model no-till planter.

What qualifies as a “superstar?” Peter does not go into detail, but he names one other artifact in his memo—the FMC tomato harvester (1969). These two artifacts share at least three key elements that Peter considered as he strengthened The Henry Ford’s collection of 20th-century agricultural technology. First, the implement represents exchange between adopters, engineers, and others, a process described as the social construction of technology. Second, the implement transforms agricultural production. Third, the consequences of the transformation reverberate beyond farm fields. 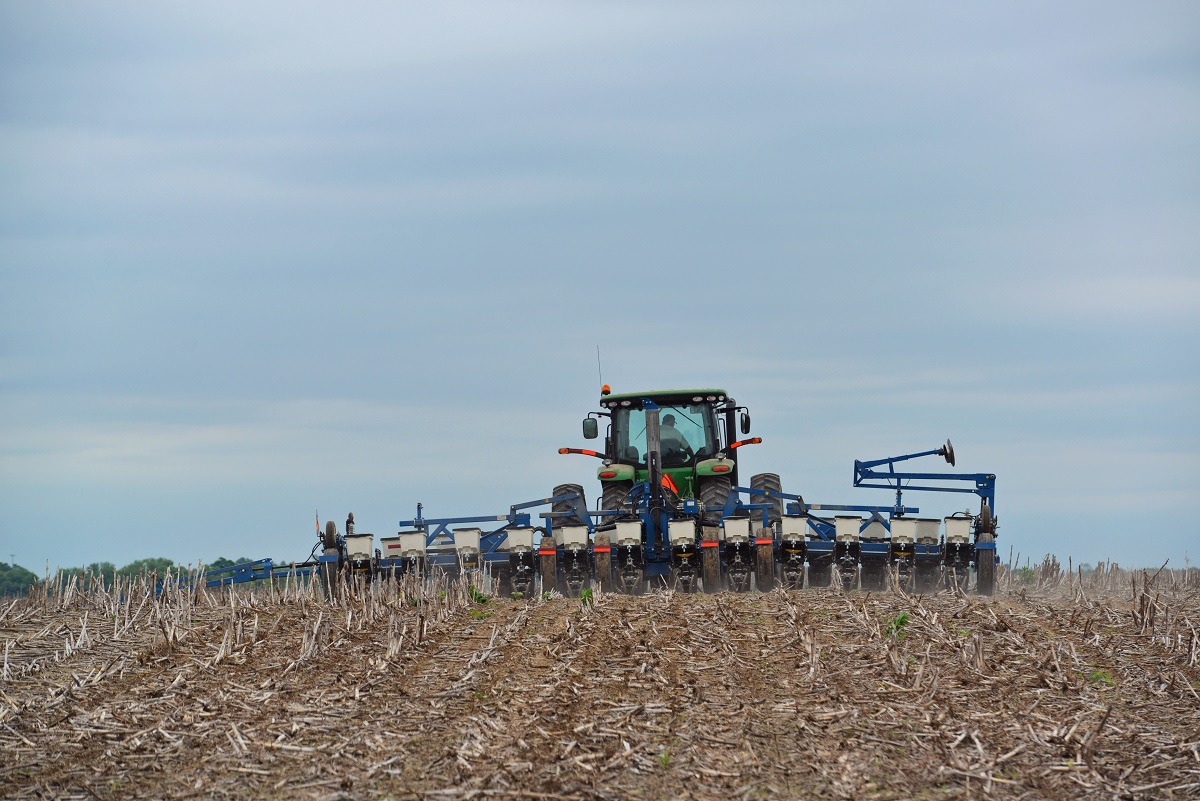 The collaborative research undertaken by teams of experts at agricultural experiment stations across the country satisfy the first of these three “superstar” criteria. The experiments station staff worked with farmers to determine their needs and respond to them. The planter donated by Deere and Company to The Henry Ford, for example, had been used by Arthur Kruse on his Calmar, Iowa, farm between 1979 and 1994. It included “a wheel module planter with dry fertilizer option, insecticide box, unit mounted coulters, and cast closing wheels.” That insecticide box is telling—the stubble-mulch farming system came with another set of challenges. The stubble served as a vector for pests, namely the European corn borer in corn. A no-till planter that applied insecticide as well as dry fertilizer appealed to farmers even more. 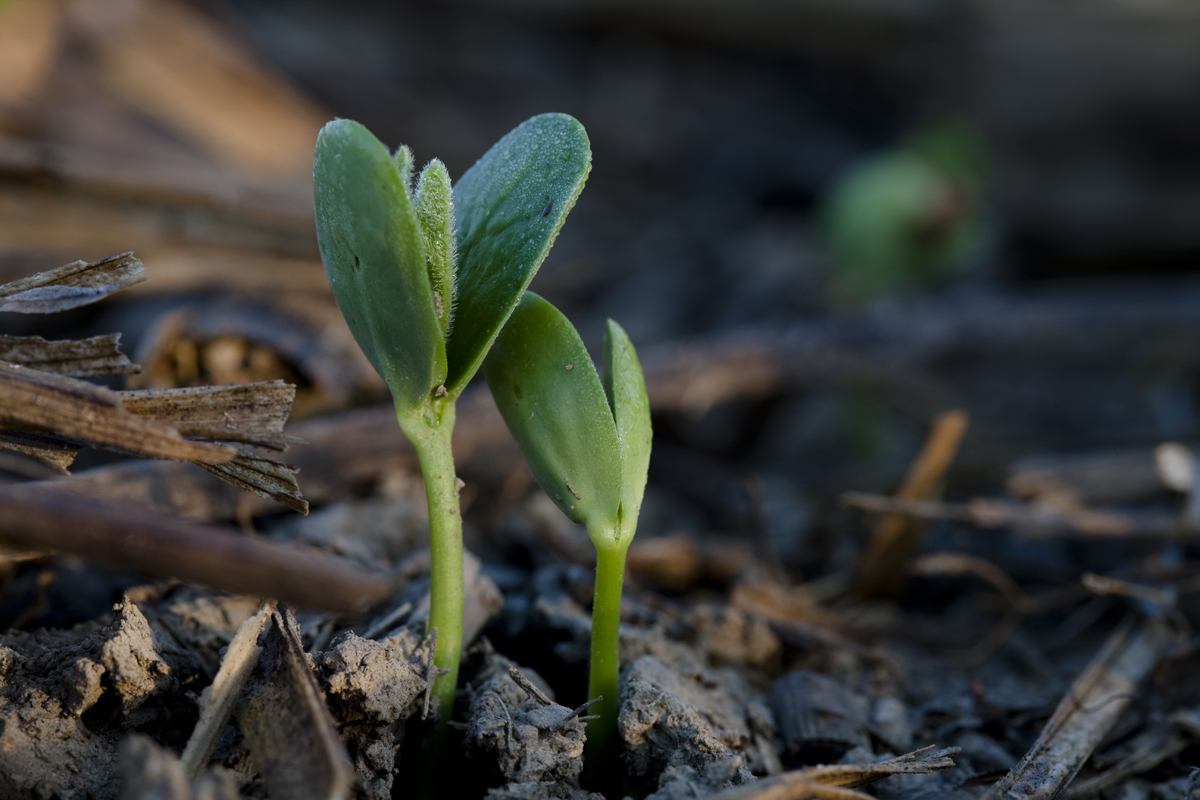 No-till planter technology changed the system of agriculture. The title of a July 16, 1994, New York Times article that Peter attached to the collections committee memo says it all: “New Way of Tilling Speeds the Plow’s Demise.” Today, no-till or conservation tillage helps farmers reduce erosion and retain soil moisture. Yet, input costs remain high as they apply herbicide to deaden growth before no-till planting, and then apply fertilizer and insecticides while planting.

On the other hand, Michigan State University researchers claim that “no-till farming practices have very positive economic and environmental benefits over decades.” Farm fields can benefit from the environmental benefits of topsoil retention enriched with hygroscopic (tending to absorb moisture from the air) organic matter. They can also realize higher yields over the long run.

The Henry Ford would love to hear from Michigan farmers about your reasons for adopting no-till farming practices, either wholly or selectively, and what you believe the benefits are. You can e-mail us your feedback at MichiganSoybeanFarmers@thehenryford.org.


Debra A. Reid is Curator of Agriculture and the Environment at The Henry Ford. This blog post was produced as part of our partnership with the Michigan Soybean Committee to deepen understanding of the important soybean crop and to provide the public with the chance to learn more about agriculture and the innovations that have helped farmers feed the world. You can learn more about the partnership, soybeans, and soybean ties to The Henry Ford in our kickoff post here.