A Table of Digital Connections

Fans of The Henry Ford know that we are a big, (wonderfully) complicated, messy (in a good way) place—we are definitely not just a car museum. Our collections are so broad that they can sometimes confuse visitors. As just one example, take a look at the five most-viewed artifacts in our Digital Collections during the second quarter of 2021.

Do you see any connections? Right off the bat, perhaps you see a connection between the Quadricycle (the first car built by Henry Ford) and the alleged Clyde Barrow letter about the Ford V-8—certainly both revolve around the larger-than-life figure of Henry Ford. Or maybe it seems obvious that the slave collar and the segregated drinking fountain both tell a story of the oppression of Black Americans over time.

But The Henry Ford’s collections contain many more artifacts than just these five, and there are many ways to find connections between them. When The Henry Ford’s curatorial, digital, experience, and web teams, as well as our experience design partners at Bluecadet, began working on Intersection of Innovation, a new multimedia experience in Henry Ford Museum of American Innovation, we set out to explore the various ways the artifacts in our collection work together as a disparate yet cohesive whole to tell a variety of stories. 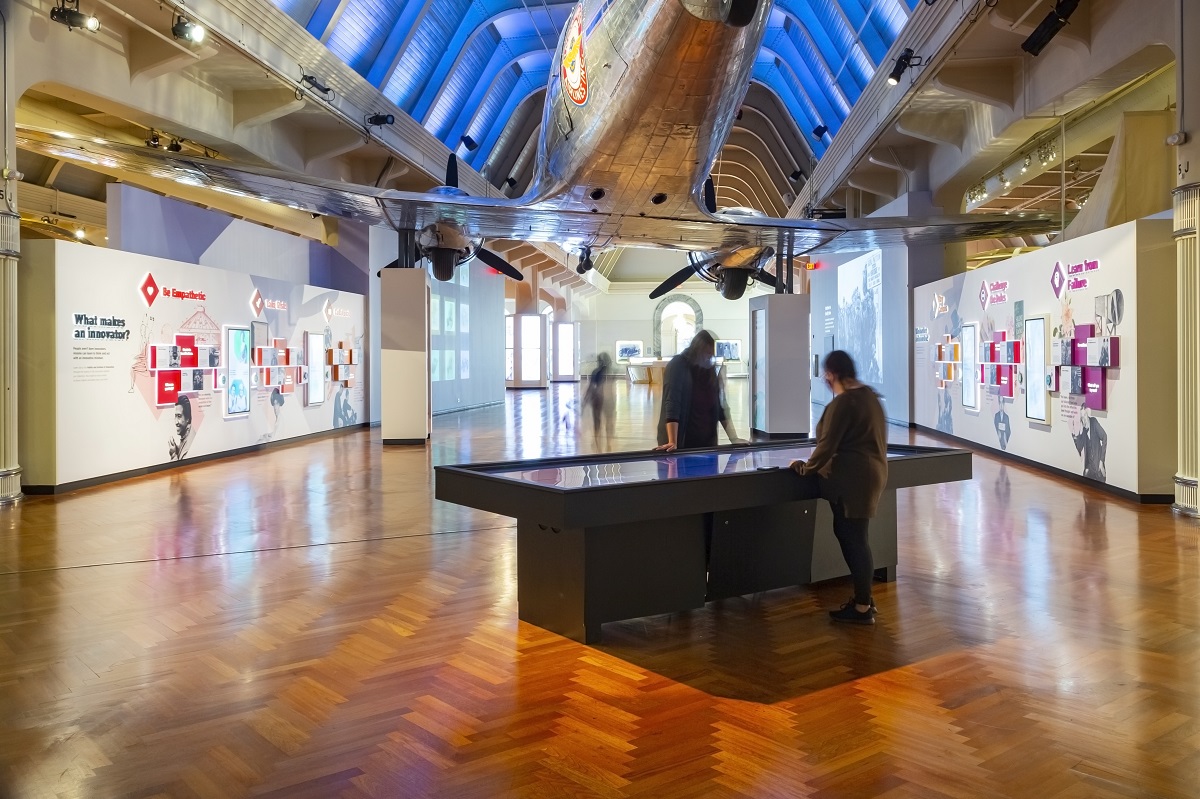 You’ll find the Intersection of Innovation right under the Douglas DC-3 in the center of Henry Ford Museum of American Innovation. / Photo by Marvin Shaouni

One of the features you’ll see in the Intersection, probably the one that involved the most work, is a twelve-foot-long touch table. This table contains images and a little bit of information on nearly 32,000 artifacts from our collection, a number that will continue to grow. But it will never contain all of our digitized artifacts, and it is not meant to be the deep dive into individual artifacts or stories that our Digital Collections and online content are—instead, it’s designed to help quickly reveal connections between artifacts in a responsive, fun, and colorful interface. Those connections take two distinct forms, each with their own strengths and limitations.

First, we started with connections created by our curators. Curators are used to illuminating the many interweaving connections between seemingly different artifacts. We tried to go beyond very straightforward connections (for example, artifacts used by George Washington Carver, or artifacts created in New York) and find unexpected connections that might catch your attention. If you’ve ever watched one of our Connect3 videos, you might be familiar with this kind of connection.

For example, for the table, we used the concept of weaving to connect an oriole’s nest, a machine used to strand transatlantic cable, and a childhood artwork by Edsel Ford in which he wove a bear out of brown yarn. These connections are surprising, unexpected, and often subtle—something artificial intelligence might not (at least today) be able to achieve. But the limitation to human-created connections is the physical limitations of the human—our staff will never be able to create these types of complex connections for tens of thousands of artifacts.

Some of the early results of artificial intelligence analysis of shape (left) and color (right) gradients among our collections artifacts. We were excited to see that the computer analysis got better as it looked at more artifacts—the machine really did learn! / Image courtesy Bluecadet

Our conclusion, therefore, was that both humans and computers bring something to the table (pun intended). Artificial intelligence can help our visitors and staff see our collections in new ways—but humans also provide a unique sensibility that computers cannot, at least today.

The entire Intersection of Innovation, including the connections table, suffered from an incredibly unfortunate accident of timing—it was installed in the museum just before The Henry Ford closed for three months last year due to the worldwide COVID-19 pandemic. When we reopened, the table remained turned off until we were sure it could be operated safely. But today it is on—and it really is a lot of fun. Swiping your fingers along the table bring up seemingly infinite dynamic and colorful strings of artifacts for which you can explore both human- and artificial intelligence-created connections.

If you haven’t yet had a chance to check out the table, we hope you’ll stop by and check it out, along with the rest of the Intersection. And if you are a tech geek (or just really interested), Bluecadet has a nice general overview of the table on their website, and an in-depth article about the process of tweaking and training the artificial intelligence on Medium.