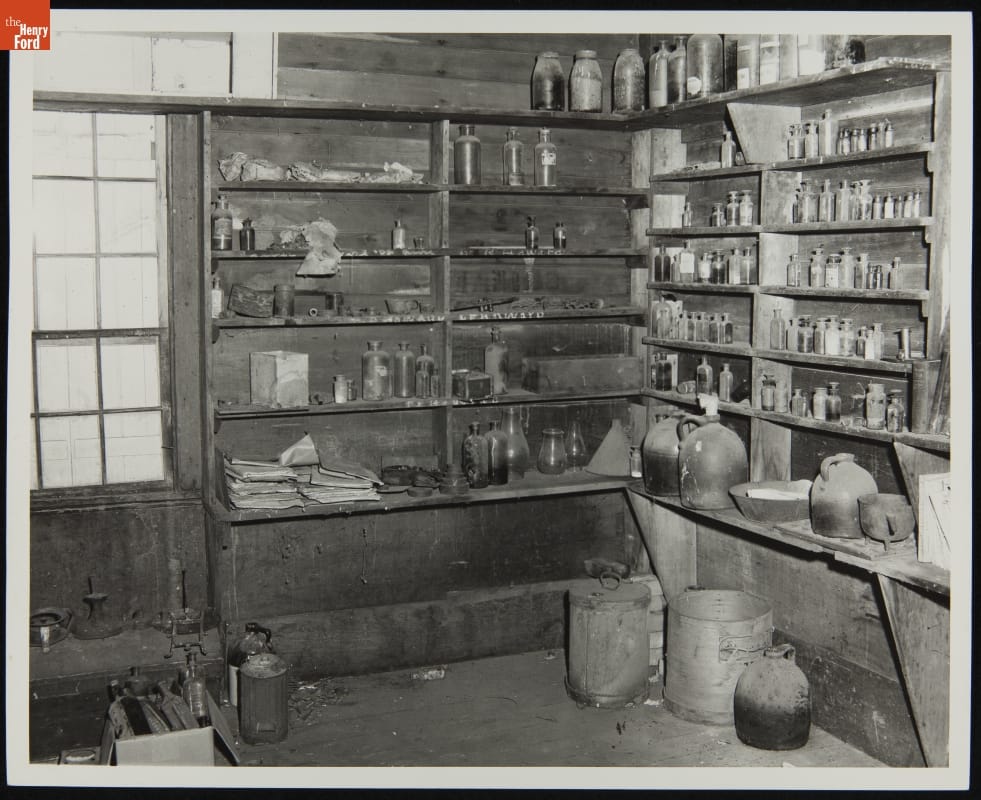 Shelves of original bottles and jars that Dr. Howard used in his medical practice, still lining the shelves of the office when this photograph was taken, just before the removal of the building to Greenfield Village in March 1956. / THF237192

During the mid-19th century, people did not know what caused disease. They didn’t understand the nature of germs and contagion, nor did they realize the connection between unsanitary conditions and sickness. The pharmaceutical industry had not yet become established and standards for ensuring safe medicinal ingredients didn’t exist at that time. 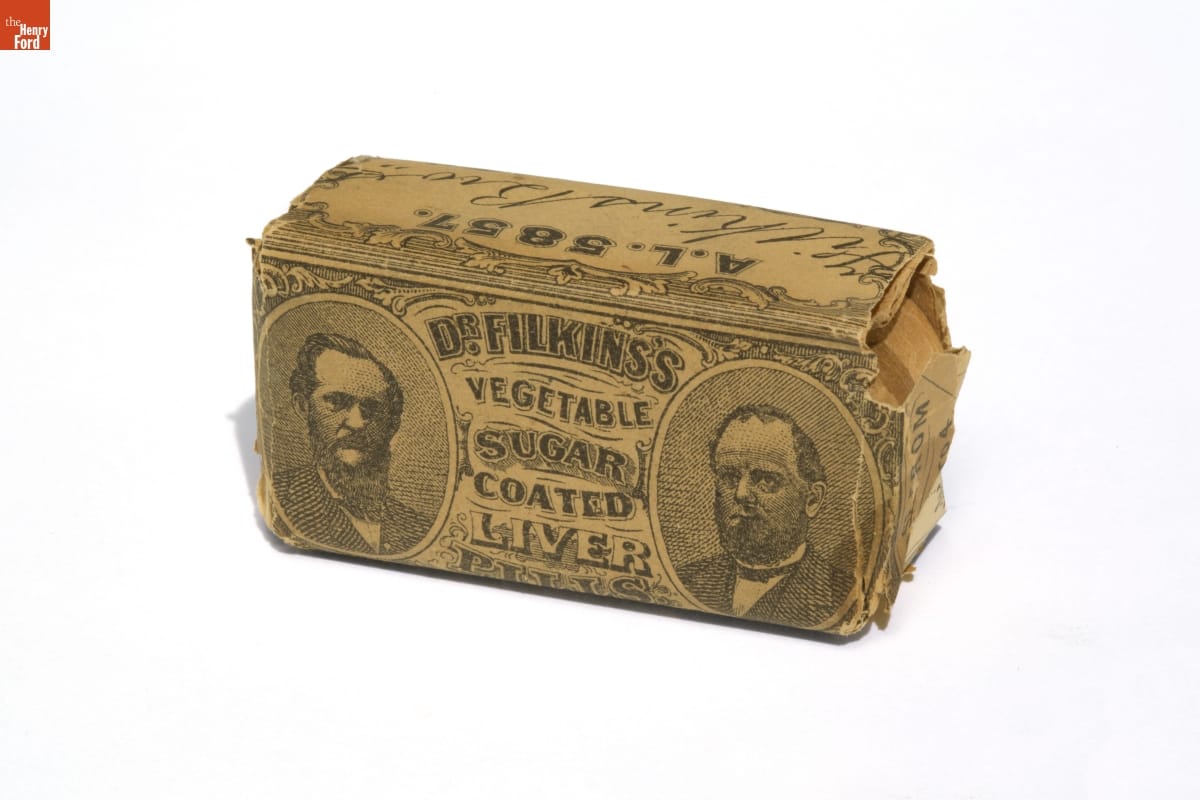 To cure what ailed them, many people at the time chose to use “patent” medicines (whose ingredients often ranged from questionable to outright dangerous) or home remedies. (For more on patent medicines, see “Patent Medicine Entrepreneurs: Friend or ‘Faux’?”) Still, most small towns had at least one person who called himself a doctor. 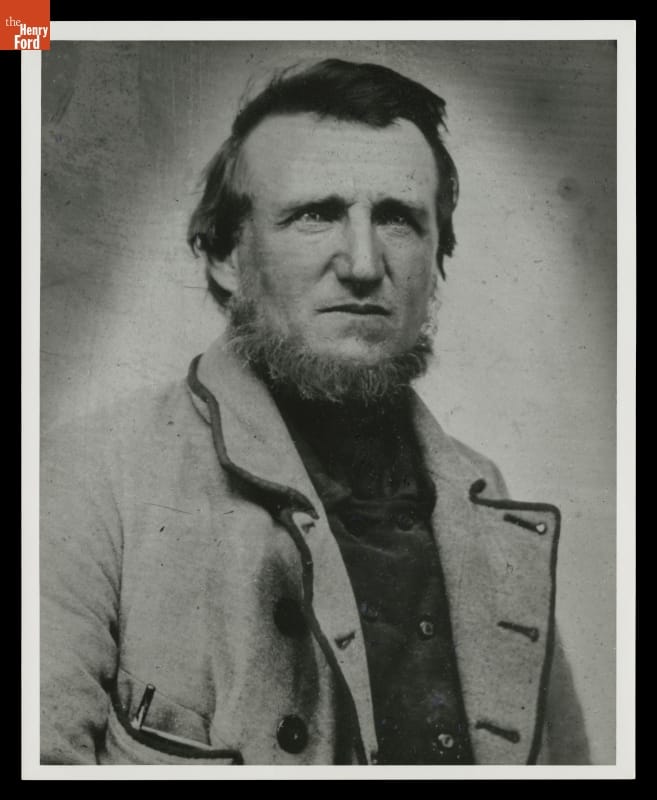 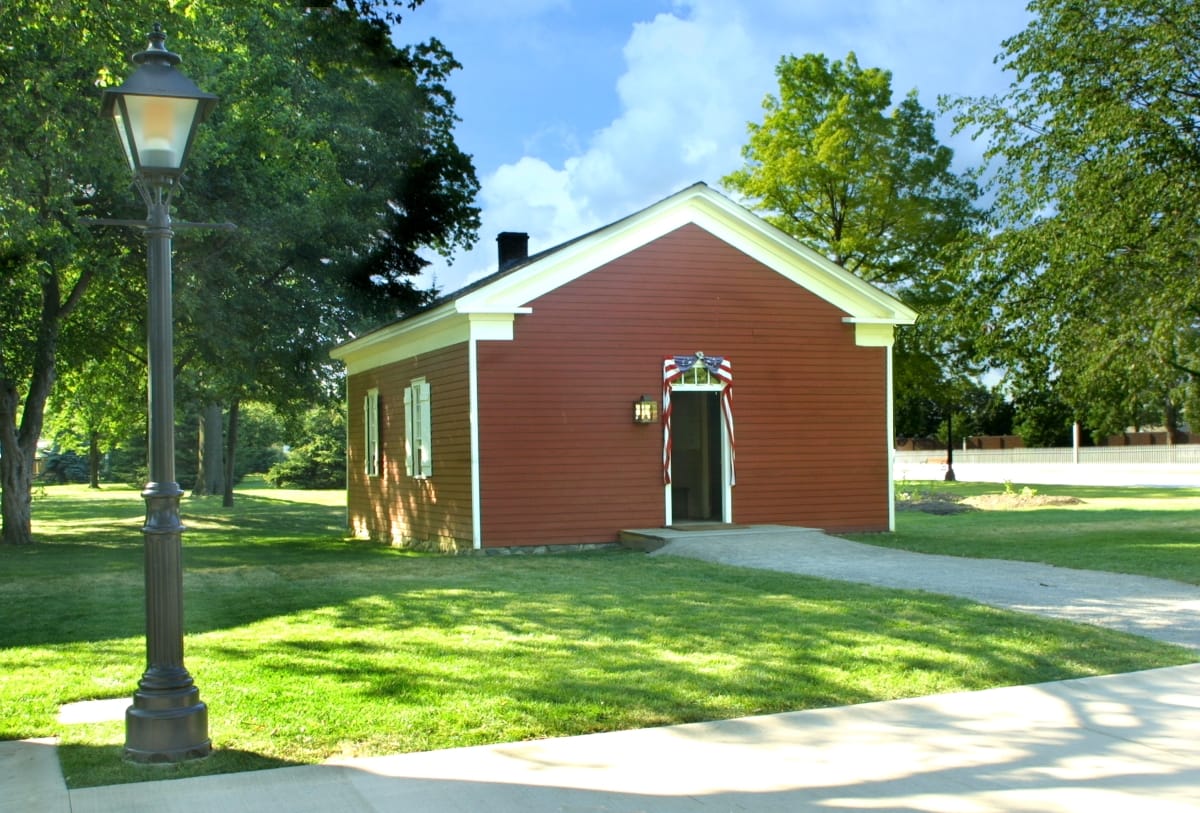 Dr. Alonson B. Howard, Jr., whose modest office is located today in Greenfield Village, was one such doctor. From 1852 until his death in 1883, he treated patients in and around Tekonsha, Calhoun County, Michigan—practicing medicine in his office as well as traveling around to visit patients in their homes. (For more on Dr. Howard’s background and medical practice, see “Dr. Alonson B. Howard, A Country Doctor in Southwest Michigan”). 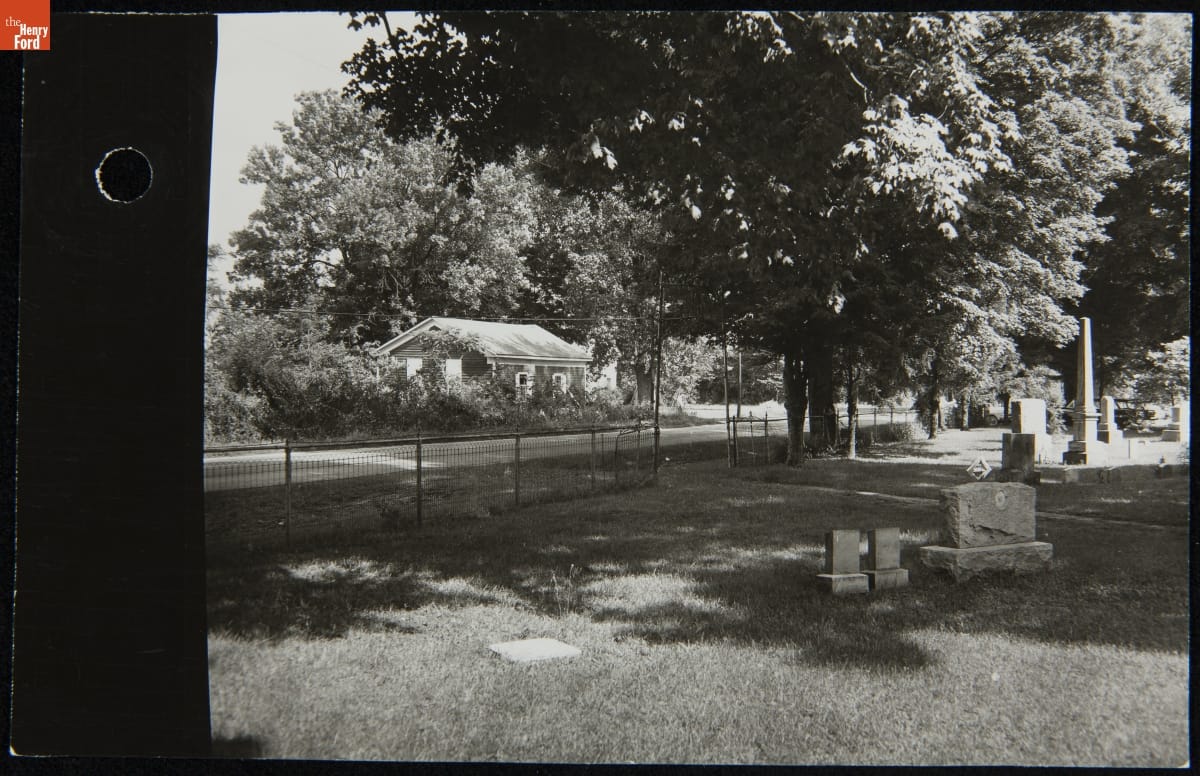 Photograph of Dr. Howard’s office on its original site near Tekonsha, Michigan, taken from Windfall Cemetery across the street, August 1959. / THF297164

Dr. Howard wasn’t the only doctor around. Several other physicians practiced medicine in and around the Tekonsha area during Dr. Howard’s career. Furthermore, visiting doctors from the East Coast made the circuit, staying overnight to administer to those who needed their specialty medicine or treatment. 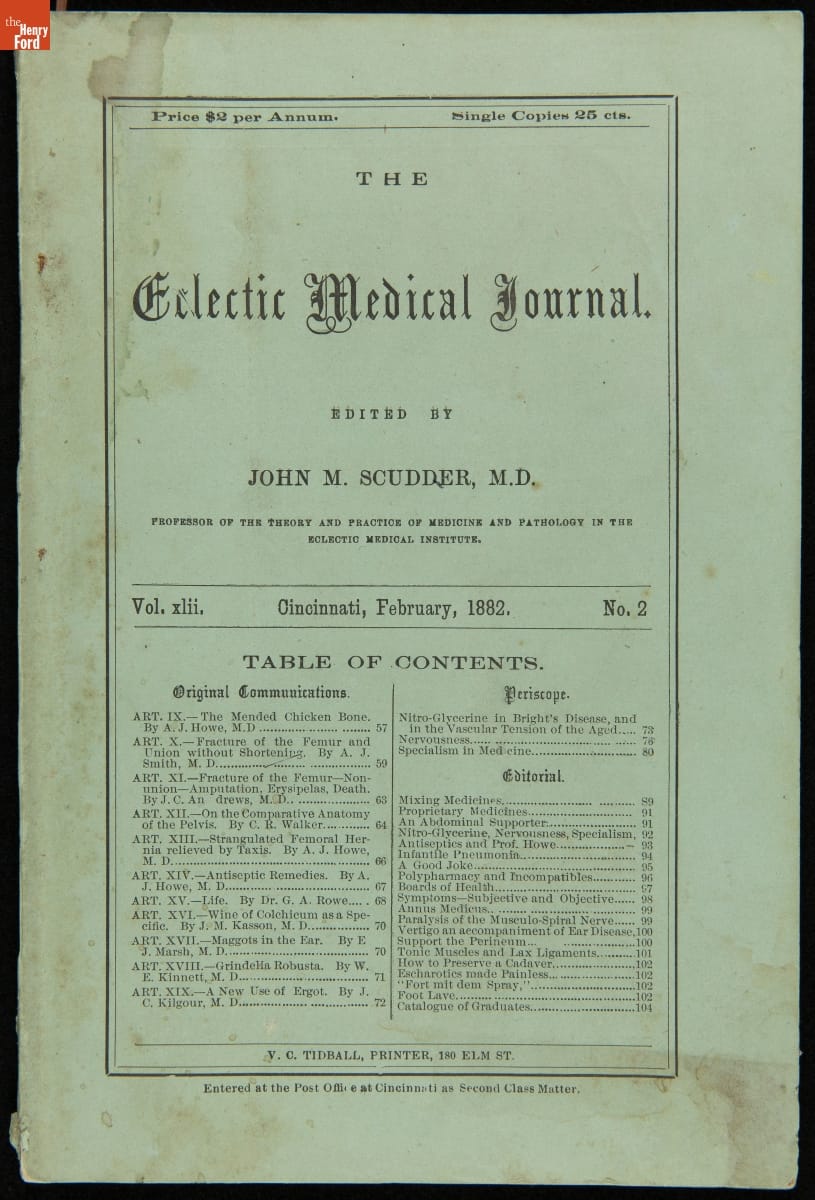 This “eclectic” medical journal from 1882 was found among the contents of Dr. Howard’s office when it was moved to Greenfield Village. / THF627461

Facing competition, Dr. Howard likely made some conscious choices about his practice. He would have been considered an “eclectic” doctor at the time, choosing from three different approaches to best treat each illness: “conventional” (also known variously as orthodox, allopathic, or heroic), homeopathic, and botanic medical practice. 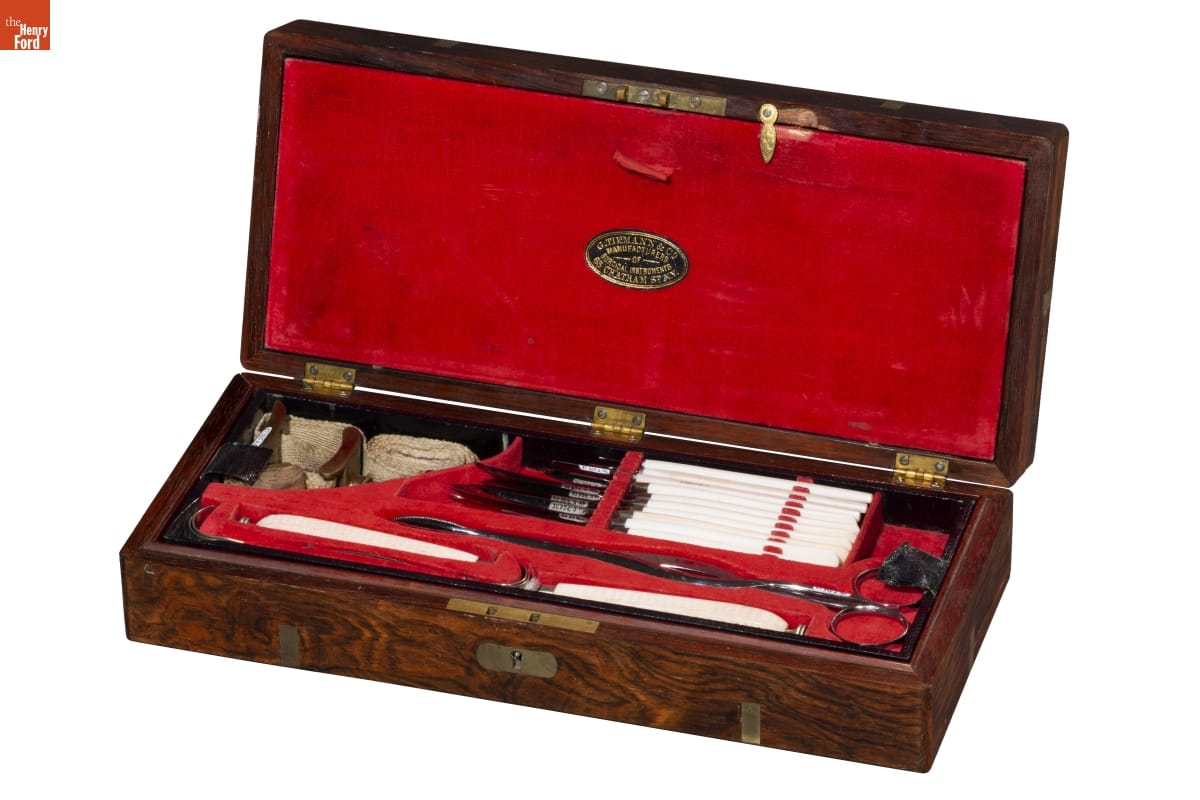 In the true sense of a country doctor, Dr. Howard combined the attributes of chemist, apothecary, dentist, physician, and surgeon. According to reminiscences and his obituary, Dr. Howard was well known for his treatment of chronic illnesses. His 1864 receipt book of remedies includes his handwritten “recipes” for the treatment of such illnesses as venereal disease, tuberculosis, spinal meningitis, scrofula, cancer, Bright’s Disease, dysentery, kidney problems, enlarged liver, worms, and menstrual problems, while reminiscences also include reference to his delivering children. 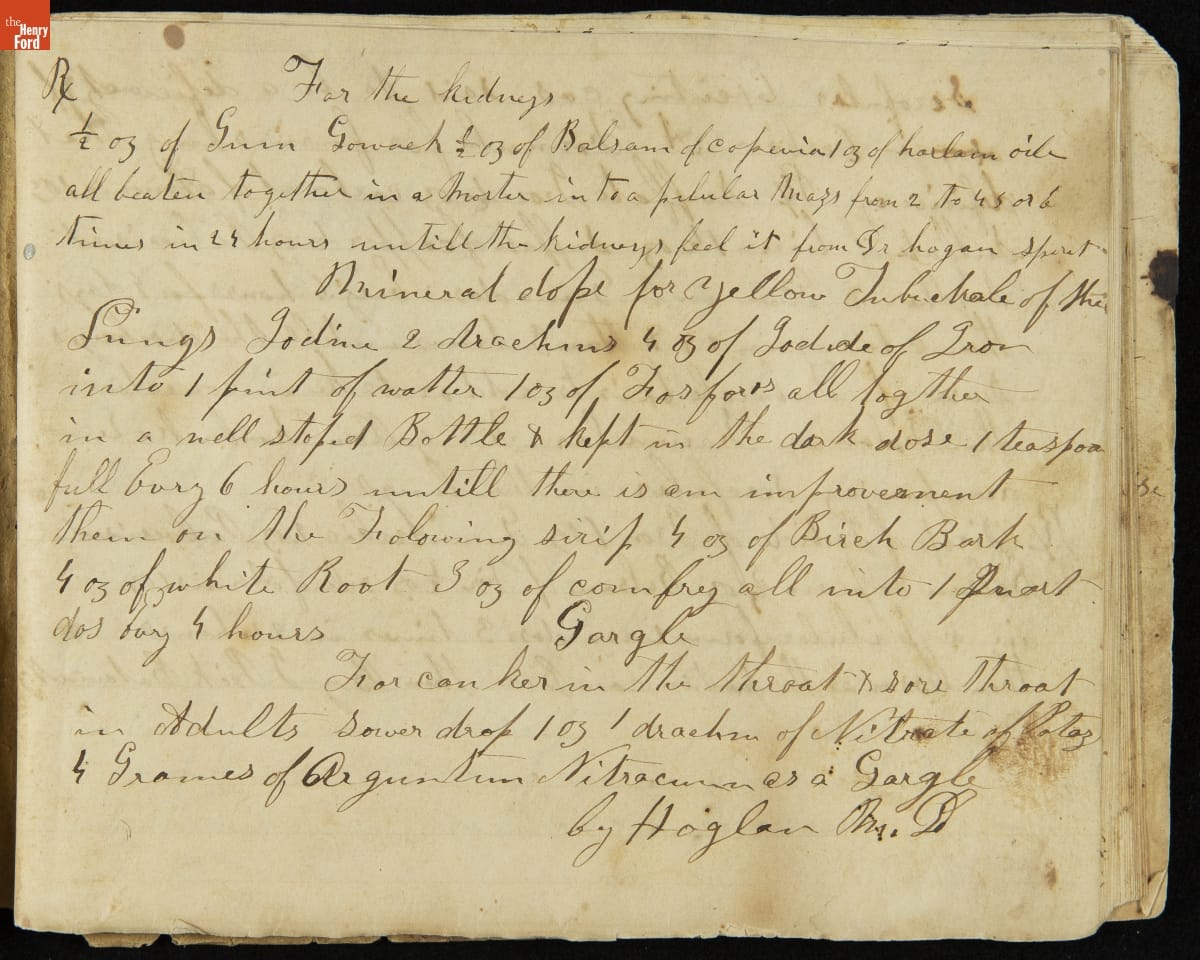 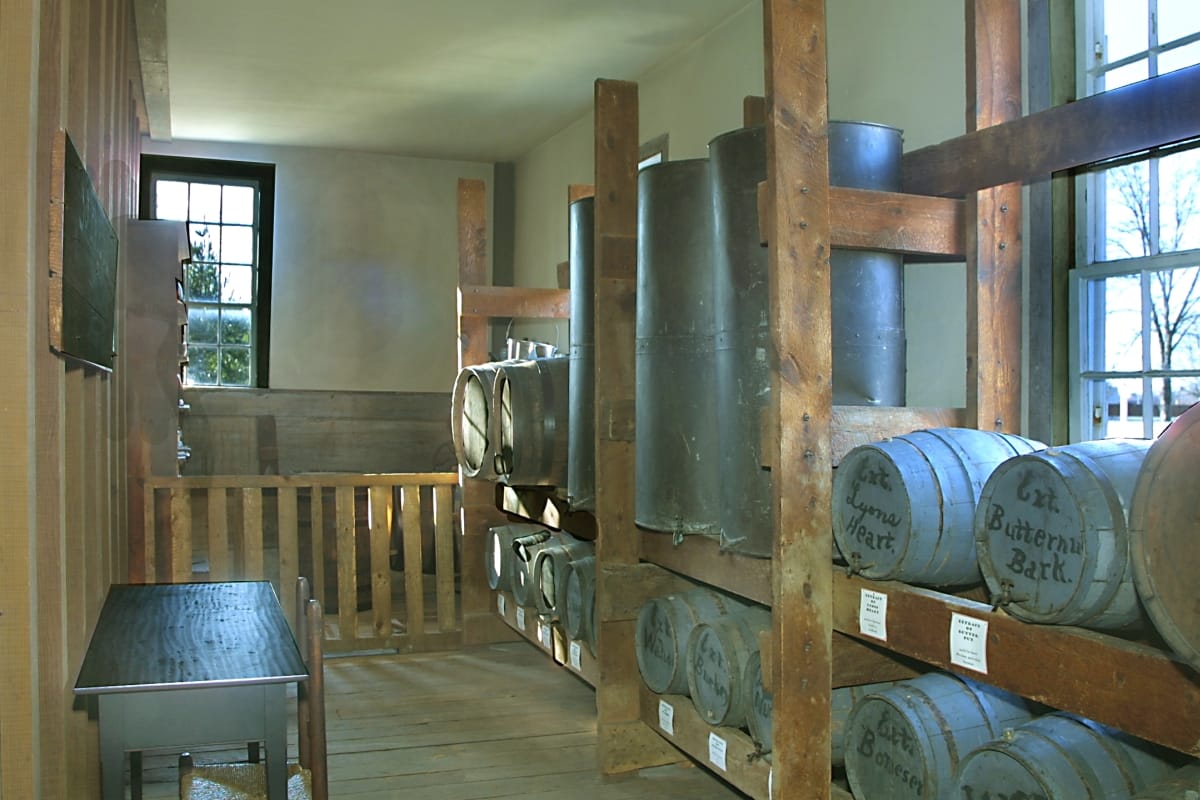 The interior of the “laboratory” in Dr. Howard’s Office today, based upon photographs of the original arrangement. The original casks are still displayed. / THF11271

Like other country doctors of the time, Dr. Howard prepared his own medicines and remedies. His niece, Etta, remembered as a little girl watching him mix powders and medicines and marveling at his speed and dexterity in folding packets.

In concocting his remedies, Dr. Howard often first ground up the raw ingredients, then carefully mixed them together using precise recipes that were his own or that he had collected from elsewhere (usually a medical treatise). Many of the medicines required careful boiling, evaporation, or distillation. Pills were hand-rolled. Smaller concoctions went into bottles and jars, while more sizable preparations of liquid extracts and syrups were stored in casks, or small barrels, and stacked on shelves in his laboratory. 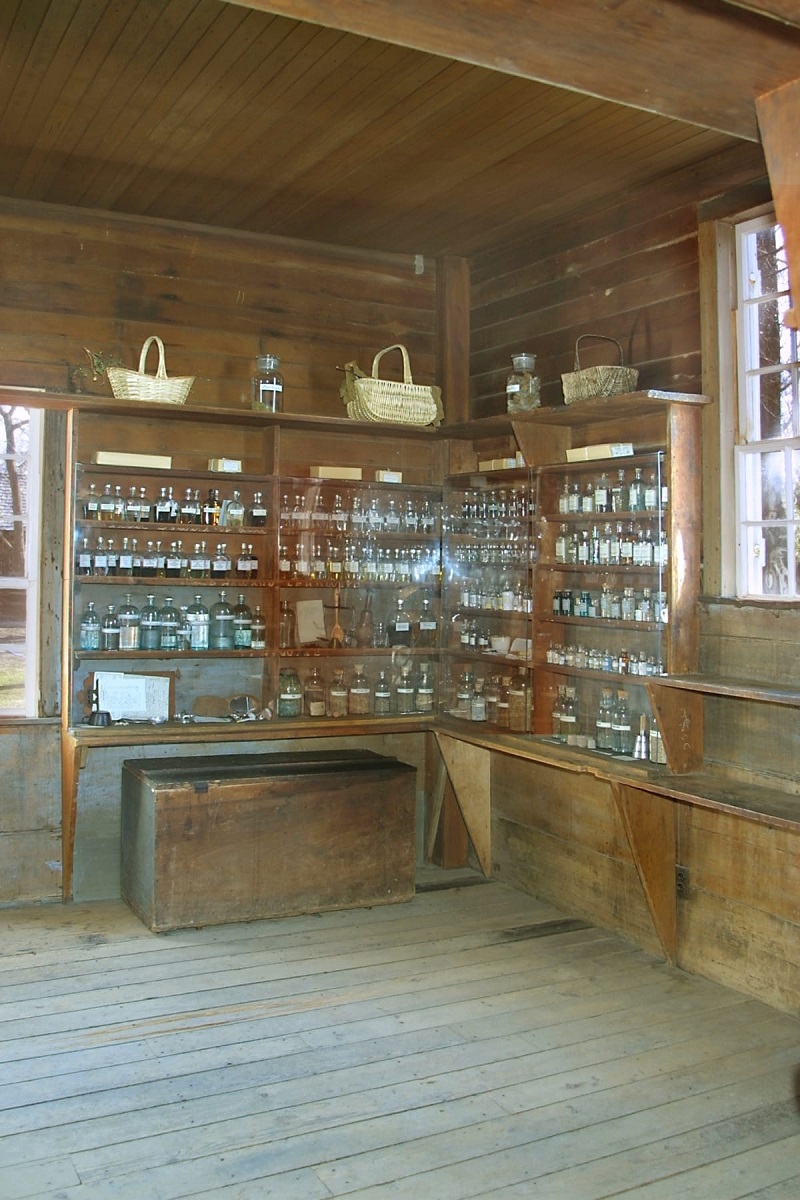 Contents of Dr. Howard’s Office today, based upon the arrangement of jars and bottles when the building was on its original site. / THF11280

The bottles and jars lining the shelves in Dr. Howard’s private office would have housed both raw ingredients for his remedies and small amounts of his homemade concoctions. Nearly all the bottles and jars that are in the building today belonged to Dr. Howard back in the 19th century. When the building came to Greenfield Village in the 1960s, many of these containers still had their original labels and contents. These provided the basis for the 2003 refurbishment of the building (after it was moved to the Village Green). At this time, many of the by-then faded labels were replaced with identical reproductions and oft-ancient contents were replaced with newer or simulated versions. 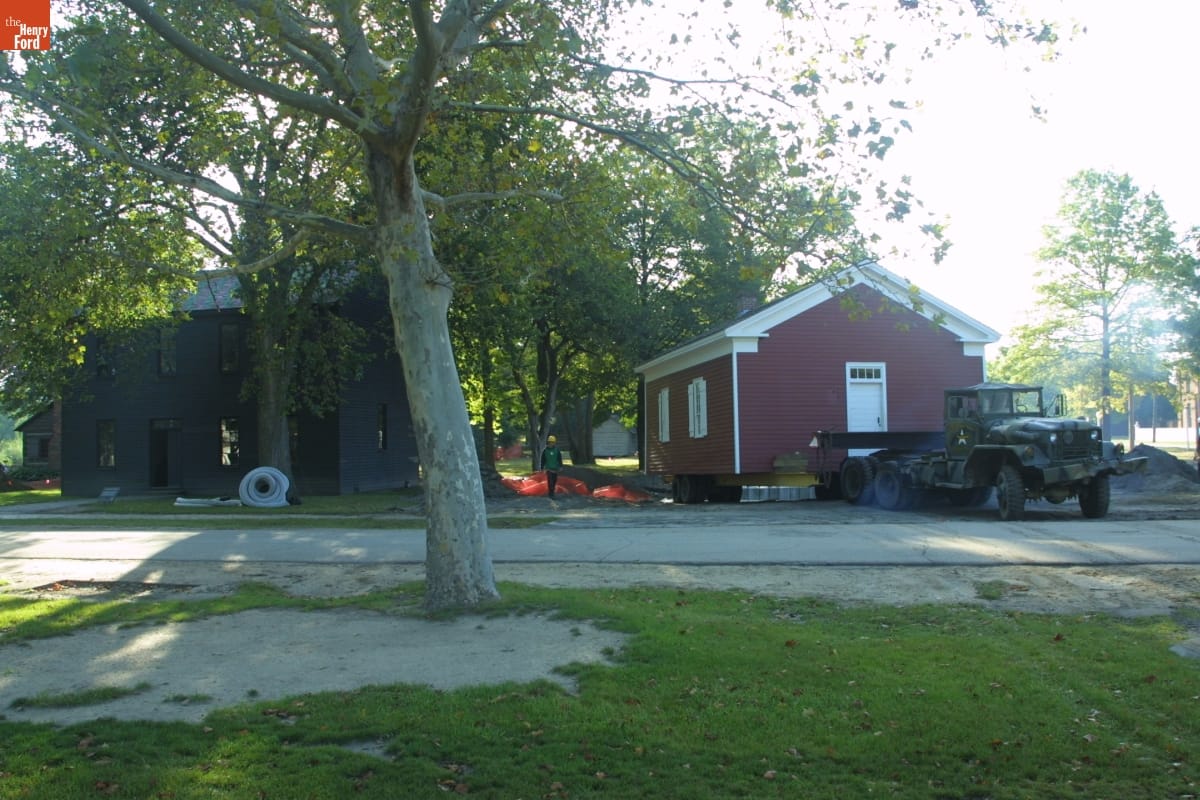 Dr. Howard’s Office being relocated to the Village Green (from its original location near where the Village Playground is today) during the 2002–2003 Greenfield Village restoration. / THF19075

Perusing these labels, in combination with the ingredients listed in Dr. Howard’s 1864 receipt book of remedies, offers us great insight into exactly what ingredients and concoctions he used to administer to the sick and ailing. Just what was in Dr. Howard’s “medicine cabinet”? Let’s take a look!

These are some of the raw ingredients that Dr. Howard used in his remedies and housed in jars and bottles on the shelves in his office:

These are the types of concoctions that he would have mixed or prepared and stored in jars and bottles in his office: 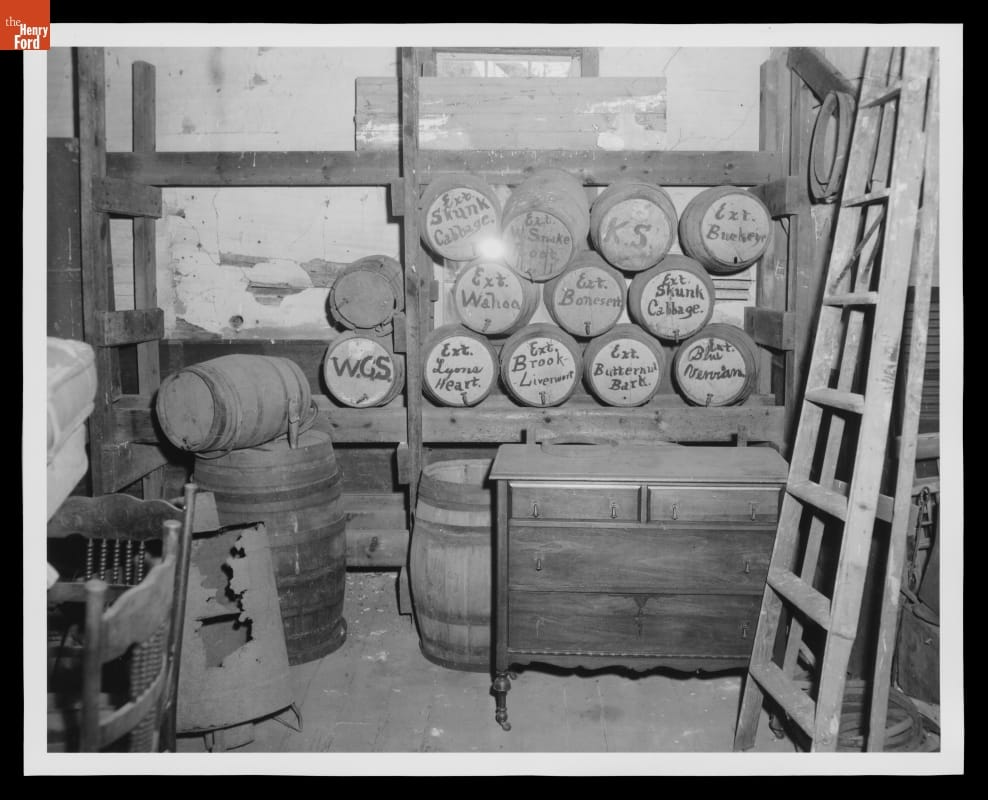 Photograph of casks for syrups and extracts on the building’s original site, taken in 1956. / THF109607

The room next to Dr. Howard’s private office, which he called his laboratory, is where he would have mixed his medicines, hung large cuttings of plants and herbs to dry, kept equipment for creating his concoctions, and stored his casks of extracts and syrups. The extracts would have been made by steeping plants, tree bark, or herbs in water, alcohol, vinegar, or other solvent to draw out their characteristic essence. These included: 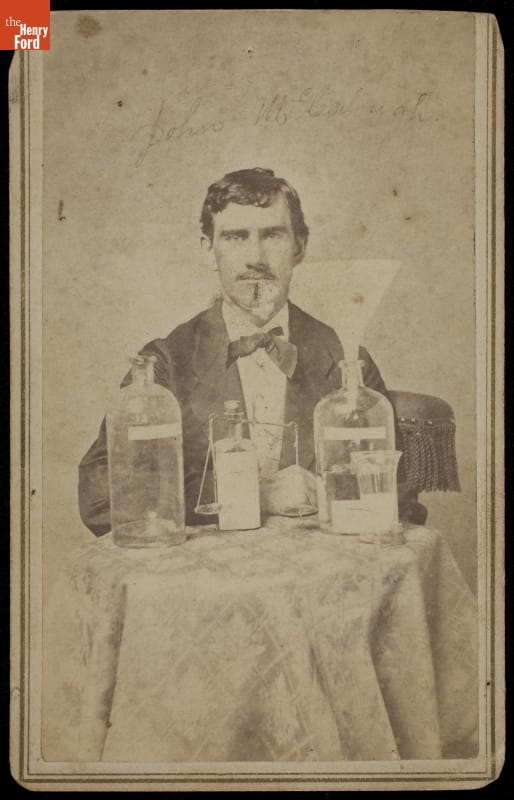 Photograph of small-town doctor John C. McCullough, from Wheatland, Indiana, 1875, posing with some of his “tools of the trade” for mixing concoctions: apothecary and medicine bottles, a funnel, a beaker, and a scale to weigh ingredients. / THF226496

Like other country doctors, Dr. Howard administered to the sick and ailing in the best ways he knew. He used existing knowledge, trial and error, and his own intuition in diagnosing and treating illnesses and diseases. He made his own decisions about what ingredients to obtain and mixed his own concoctions. 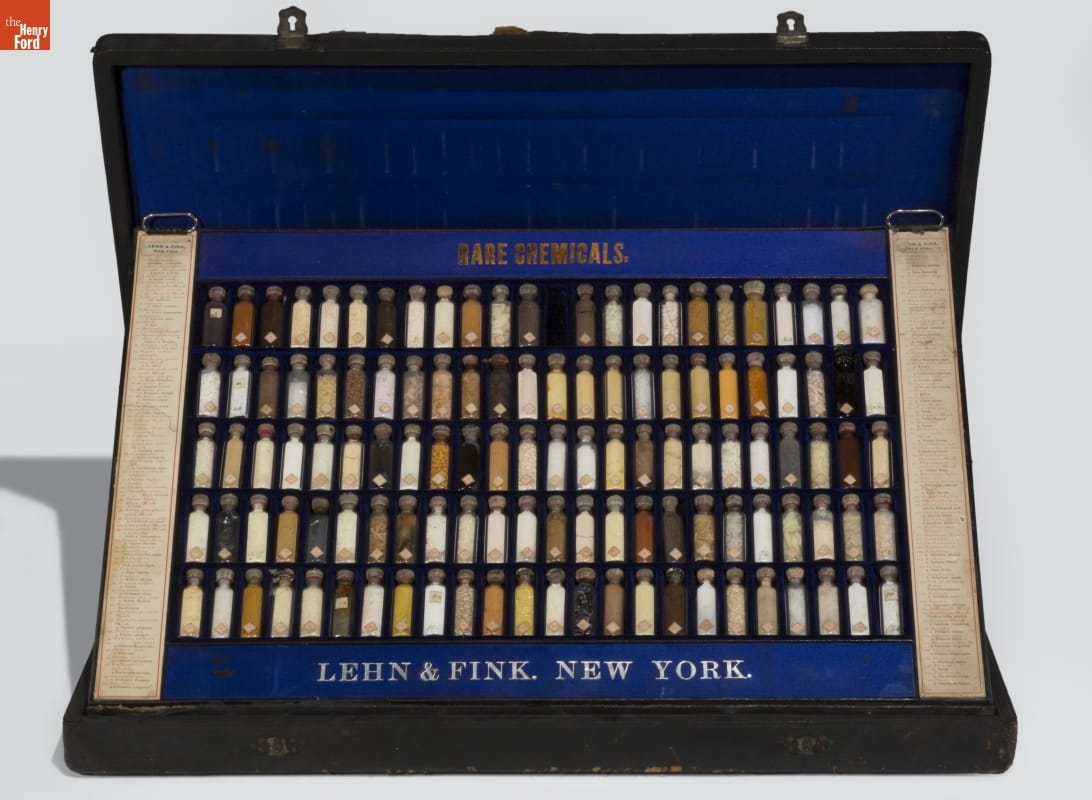 The pharmaceutical industry was just becoming established when Dr. Howard passed away in 1883. This kit contains pharmaceutical samples created by Merck about 1884. Merck traces its origins to the German Merck family, who founded the business back in the 1600s. Its American affiliate was created in 1891. Lehn & Fink were New York City importers, exporters, and wholesale druggists during the 1880s. / THF167218

This was a time before prescription medicines and safe, off-the-shelf drugs were available, and before there were government safety standards on ingredients (which began with the Pure Food and Drug Act of 1906). Some of the ingredients that Dr. Howard used may seem odd or unfamiliar to us today. Others appear more familiar, though these are more likely to be used today to treat such health concerns as headaches, anxiety, or insomnia than the deadly infectious diseases of Dr. Howard’s time. In all, the contents of Dr. Howard’s office—the original jars, bottles, and casks, as well as his receipt book of remedies—give us an extraordinary opportunity to look, deeply and viscerally, at the contents of one country doctor’s “medicine cabinet.”


Donna R. Braden is Senior Curator and Curator of Public Life at The Henry Ford. She would like to acknowledge the meticulous work of Nancy Bryk, former curator at The Henry Ford, in refurbishing the office interior when it was moved to the Village Green during the 2002–2003 Greenfield Village restoration.