Family Fun in the Family Car 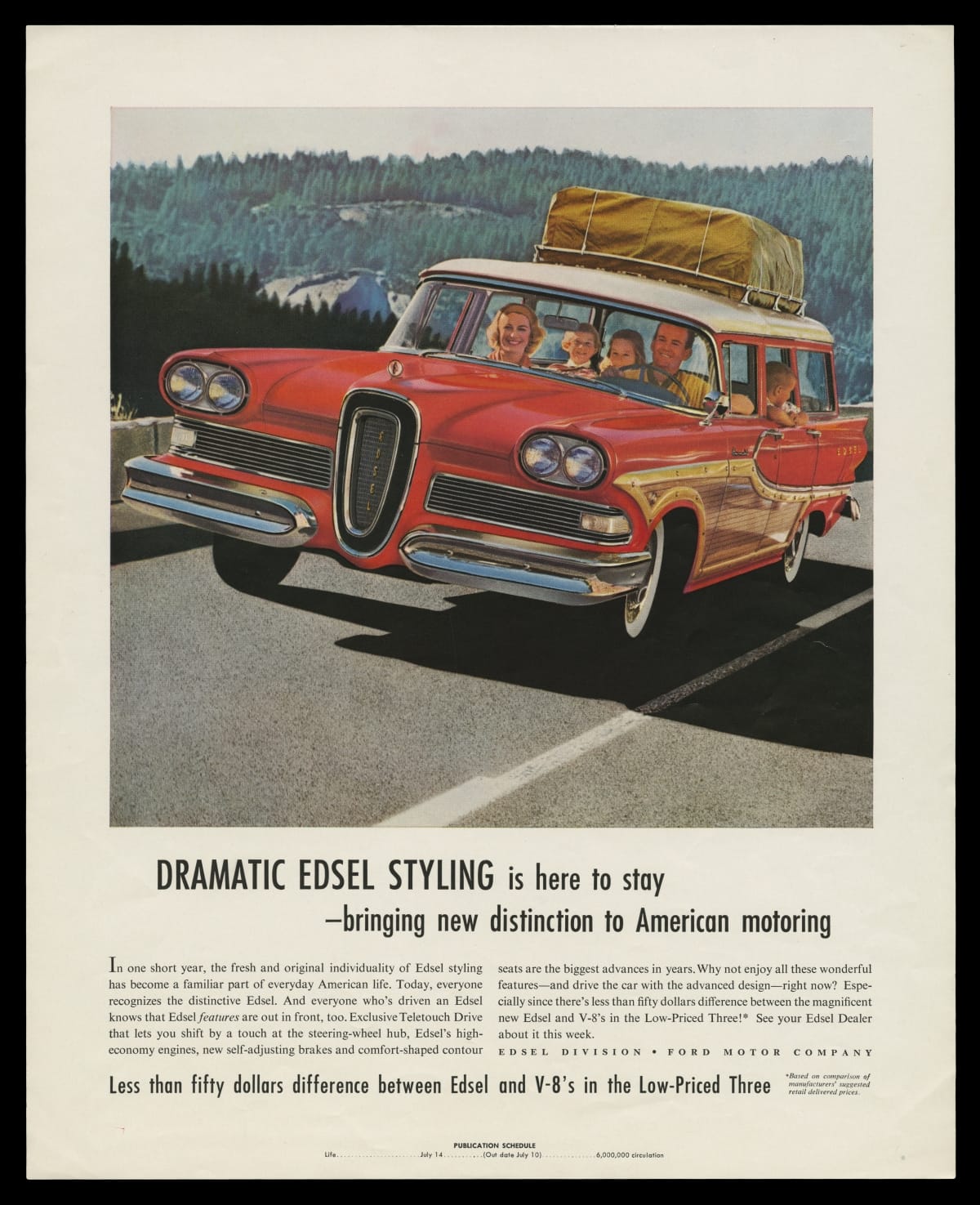 A happy family on a road trip inside their 1958 Edsel Bermuda Station Wagon. THF124600

Nothing epitomizes the 20th-century American family vacation more than the station wagon. After World War II, as family vacationers flooded the highways out to enjoy all that America had to offer, the station wagon became the quintessential family car.  Although they had been around for a few decades, station wagons by this time had become roomier, more comfortable, and more within the reach of family budgets. As shown in this circa 1953 Coleman brochure, station wagons proved the perfect vehicle for families who needed to haul lots of gear for their “back to nature” camping vacations.  THF275653

When limited-access turnpikes and interstate freeways expanded across the country during the 1950s and 1960s, sales of station wagons exploded. From three percent of all cars sold in 1950, sales of these cars mushroomed to 10 times that in 1955. By the end of the decade, some one in every five cars sold was a station wagon.

As family vacation trips lengthened, so did the time family members spent on the road together in the car. However, even though the ads claimed that vacations taken in a roomy, comfortable station wagon could improve family relations, this wasn’t always the case. Younger family members, in particular, inevitably got cranky and bored--threatening any attempt at family togetherness and fun. Enter a host of family car games and activities. Mom and the kids read together in the back seat of the family car, with apparent disregard for “buckling up” for safety. THF275640

During the 1950s and 1960s, inventive game manufacturers, creative writers, and ingenious publishers devised all manner of family games and activities.  These were intended to keep family members occupied, reinforce family togetherness, and increase the fun of traveling together. 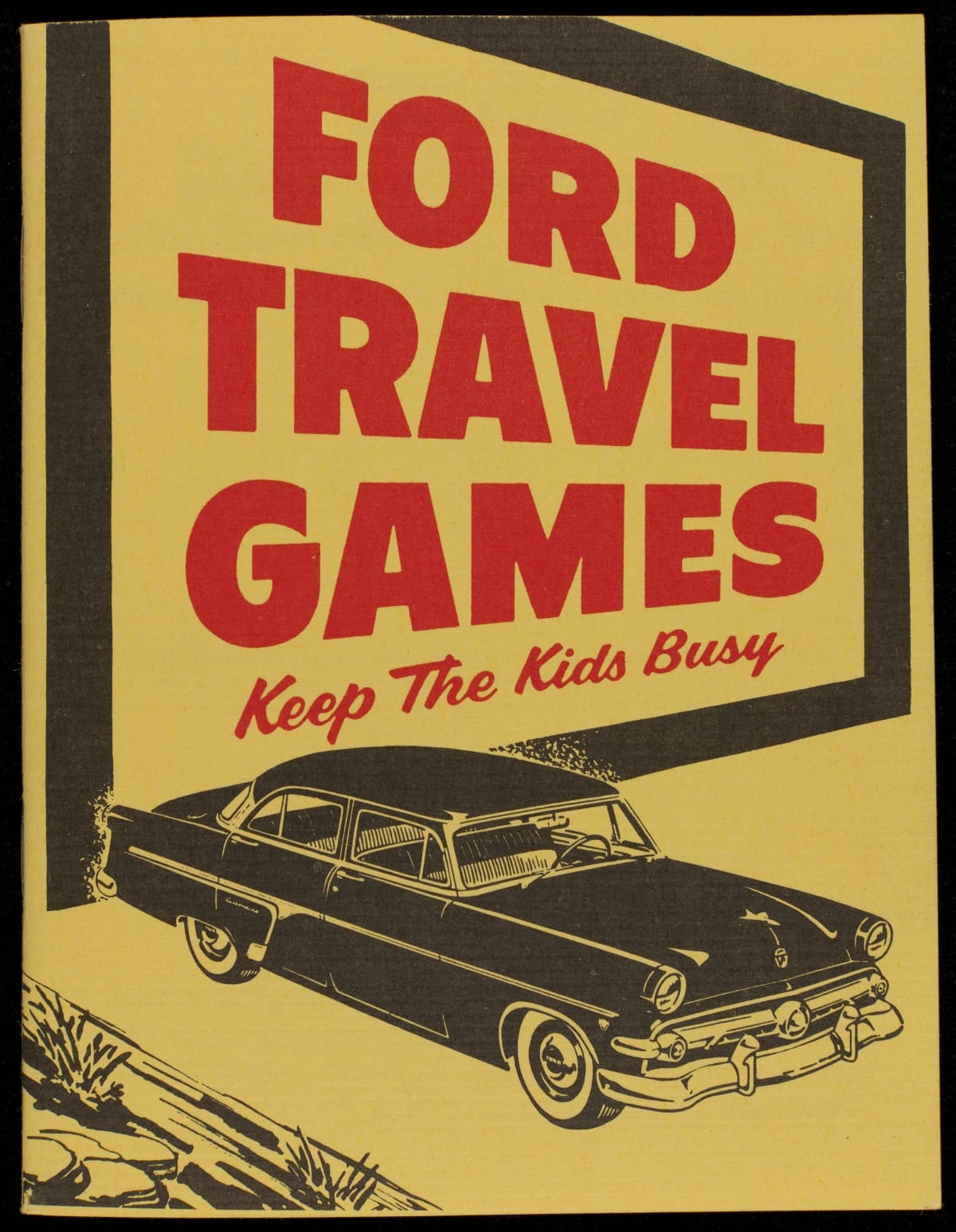 During the post-World War II era, many of the car games and activities with which we are still familiar today were published and disseminated. This 1954 Ford dealer giveaway book was dedicated to the author’s four teenagers, “whose restlessness during childhood days first made these games necessary.” Most games in it, intended to be played by young and old, were the “scavenger” type, that would “help much to pass the time in an enjoyable manner” while “affording an opportunity for all members of the family to enjoy doing things together during the long hours on a motor trip.” The object of these scavenger-type games was to see who was the first one to find the items on the list, including car license plates, animals, sounds, and songs. Other games and contests included the classic I Spy game, a memory game called My Grandfather’s Trunk, and identifying shapes by looking at cloud formations. The 1959 Ford Game and Travel Book included games, songs, stories, riddles, and information enough to “provide hours and hours of pleasure for the whole family during the trip.”  It included 128 full-color stamps to affix to various pages.  The games and activities were much the same as those in the 1954 Travel Games book. Dave Garroway, the founding host and anchor of NBC’s Today TV show from 1952 to 1961, was known for his easy and relaxing style. By the time this book was published in 1960 for members of the American Automobile Association, Garroway would have been a familiar name in most households. This book of “sit-able” games, quizzes, riddles, contests, puzzles, songs, and coin tricks “guaranteed miles of motoring pleasure” and was intended to “make any trip easier, safer, and more agreeable for parents and youngsters alike.” Auto Bingo, a product of the Regal Games Manufacturing Company from Chicago, Illinois, was introduced in the 1950s and proved incredibly popular during succeeding decades.  The classic game, shown here, is still produced today. 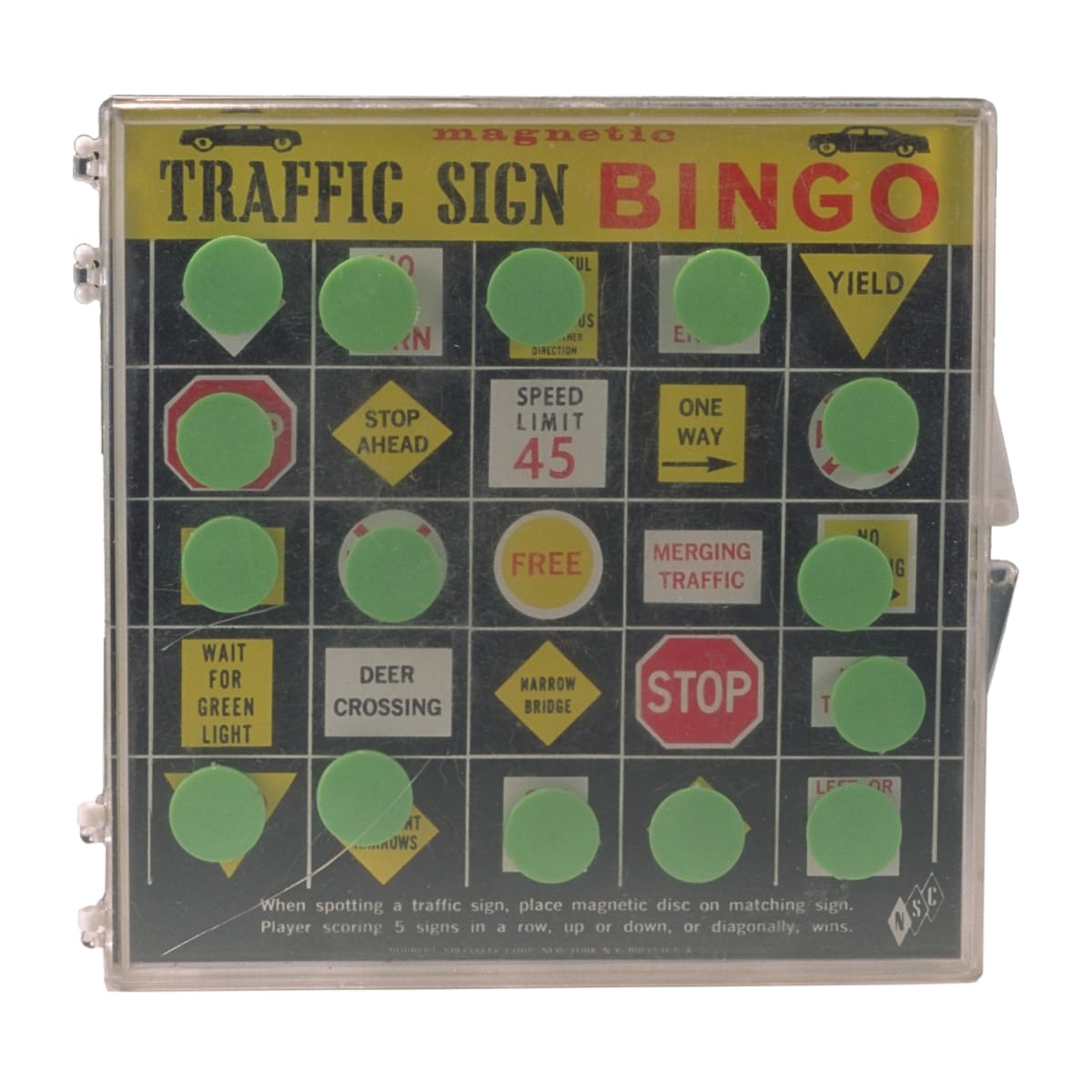 The popularity of the classic Auto Bingo game spawned many variations, like this Traffic Sign Bingo, with magnetic game pieces. 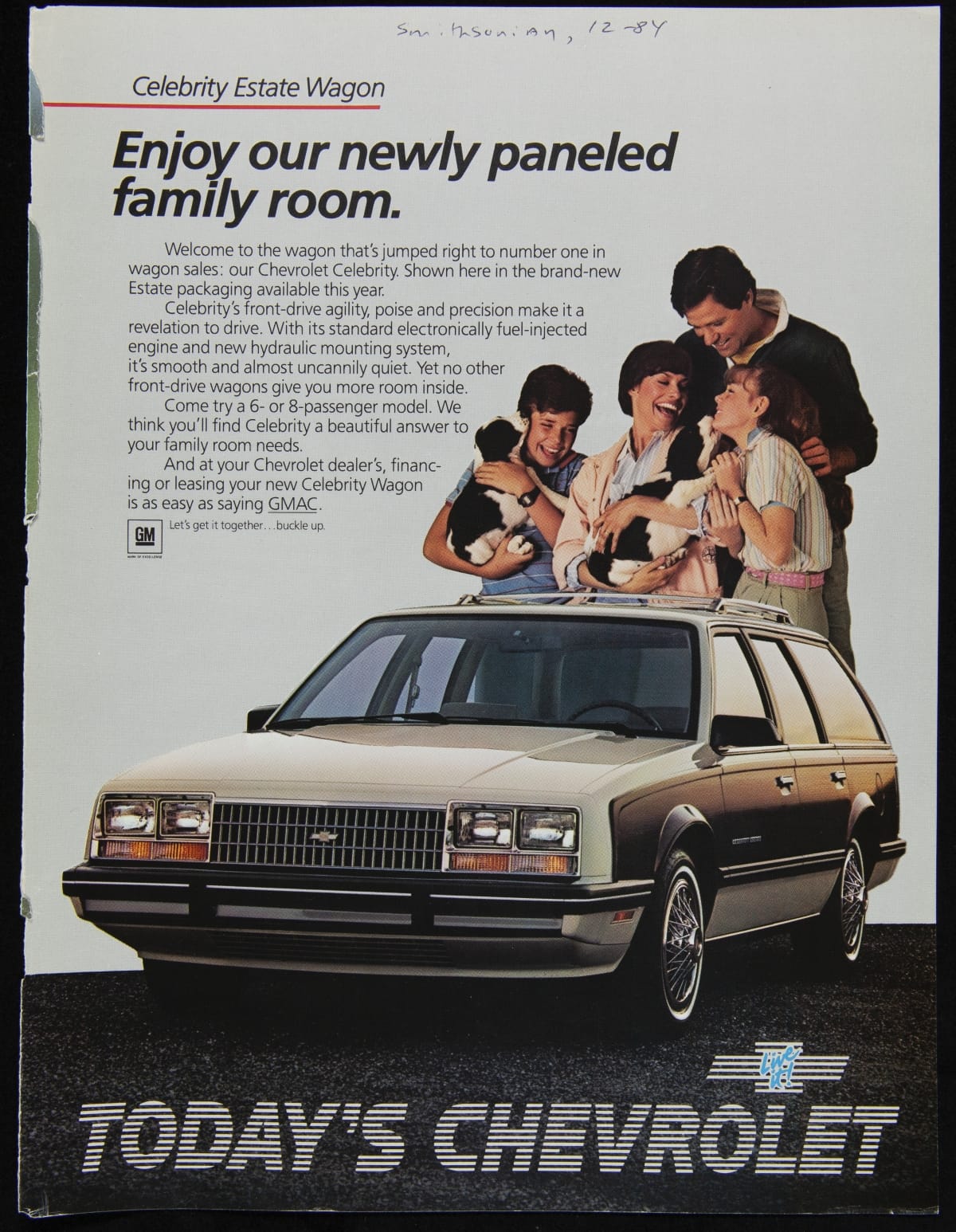 Although the OPEC oil crisis and tougher emission standards dealt a blow to the station wagon market in the 1970s, station wagons were still considered the family vacation vehicle of choice.  By the early 1980s, these vehicles had greatly expanded in size and comfort over their 1950s counterparts.  Manufacturers promoted their spaciousness, like this ad that likened the 1984 Chevrolet Celebrity Estate wagon to a family room!  This is, in fact, the very type of vehicle that was satirized in the 1983 film National Lampoon’s Vacation--although the Griswold family’s clunky green Family Truckster was actually a modified 1979 Ford LTD Country Squire. 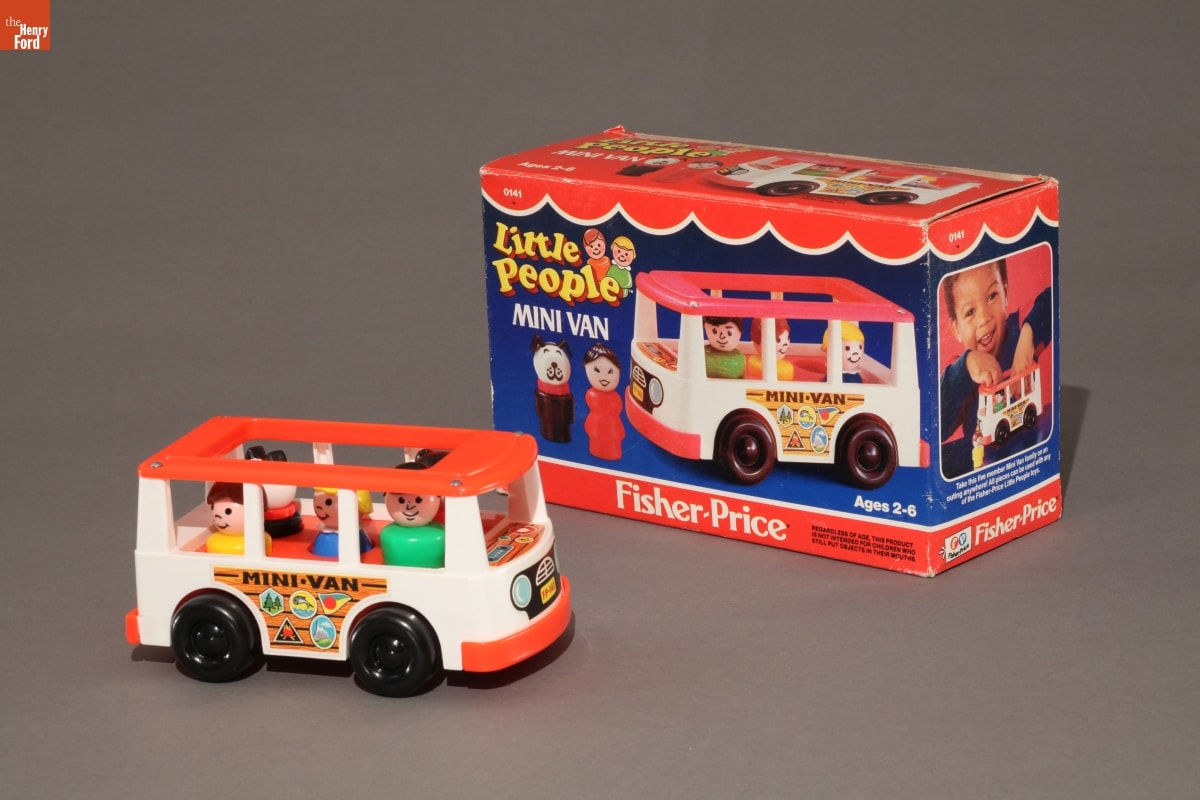 While we may have chuckled at the Griswolds’ Family Truckster in 1983, the future of the station wagon as a family vacation vehicle was, in fact, no laughing matter.  Families would soon prefer roomy minivans, introduced in 1984, and fully-featured SUV’s in the 1990s, to haul kids and luggage on long-distance trips. The family vehicle pictured on the cover of this 1985 travel game and activity book is more akin to a minivan than a station wagon. THF275648

As family road trips continued in subsequent decades, such innovations as portable music and gaming devices and in-car DVD players came to occupy and entertain family members during long trips. 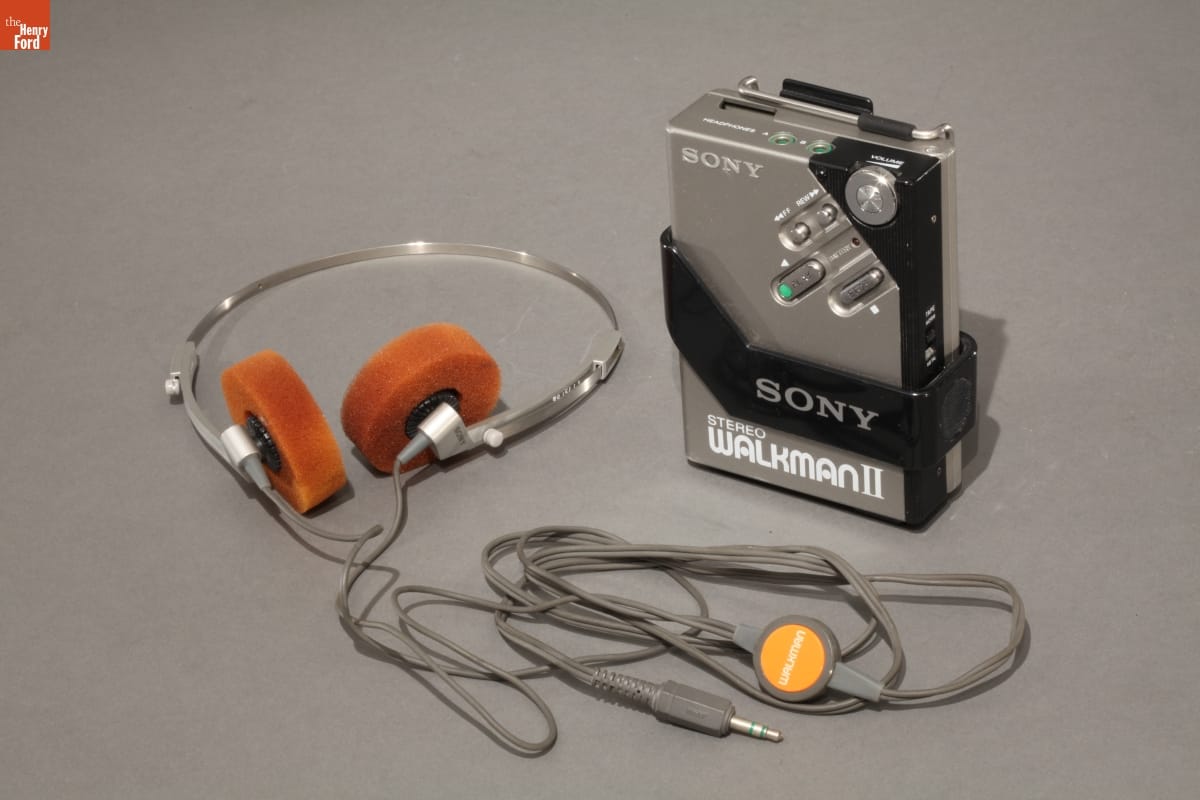 A 1982 redesign of the original Sony Walkman, the first portable audio cassette player introduced in 1979. THF153124

But classic family games and activities persisted, in both traditional and newer versions. This set contained 10 games (including Solitaire, Checkers, and Mini-Chutes and Ladders). Its interchangeable game board contained holes to hold peg-like game pieces in place. THF140658 Scrabble isn’t the best idea for a travel game, as letters are small and can easily get lost. Later versions of this game came with magnetic letters. THF106452

Today, we have a plethora of personal and mobile technologies to keep individuals occupied in the car on long-distance vacations (if they don’t opt for much speedier air travel). But these devices also separate and isolate members of the family. It’s nice to know that, if you want, you can still find classic family car games and activities online or available as digital downloads. And, of course, there’s still the old way of learning the classic games--passed down from parent to child.

Anyone for a rousing game of I Spy?

Donna R. Braden, Senior Curator and Curator of Public Life, grew up in a large family and took many family vacations with her parents and four brothers in their Country Squire station wagon.